Difusora S.A is a distributor of smokers' materials. Around 1970-80 they also distributed "Minifusor" playing cards.

Difusora S.A is a distributor / producer of smokers’ requisites, including lighters, cigarette holders and filters. Around 1970-80s they also distributed Minifusor playing cards which came in two versions as well as special packs for advertising and cartomancy►

There were two Spanish-suited versions: a modern re-drawing of the Catalan pattern (Minifusor Clásico) and an original fantasy quasi-eighteenth century design (Minifusor Tipo Español, regd no. 239,012) with a seated king of coins. Packs have two jokers and in some cases the artist’s signature Hernández is visible on the Joker. Hernández also designed a pack of cartoon cards►

The manufacturer’s details can often be found on the four of coins or cups, but in some cases are omitted.

Above: Naipes "Minifusor" tipo Español. The courts are an original medieval fantasy design with each suit in a predominant colour. The king of coins is seated on a throne. Difusora also produced a Cartomancy version of this deck. 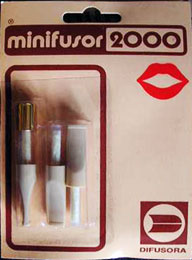 Left: Minifusor 2000 cigarette holder with filter. These items are still available through tobacconist suppliers, although the playing cards are no longer available. It is not known when or why playing cards were discontinued. However, the same logos and brand names are still being used.