Bertrand Domec was an importer of playing cards into Argentina. The business was first established in around 1904 as successors to Pedro Desparbez, with the first address as Buen Orden 263, which was renamed to Bernardo de Irigoyen 263, Bs. As. following a government decision to commemorate patriotic heroes in street names.

Domec was the exclusive agent of The New York Consolidated Card Company, U.S.A. and imported brands such as “Squeezers”, “Bee-92” and “Congress” into Argentina  (see Complete list of Importers) 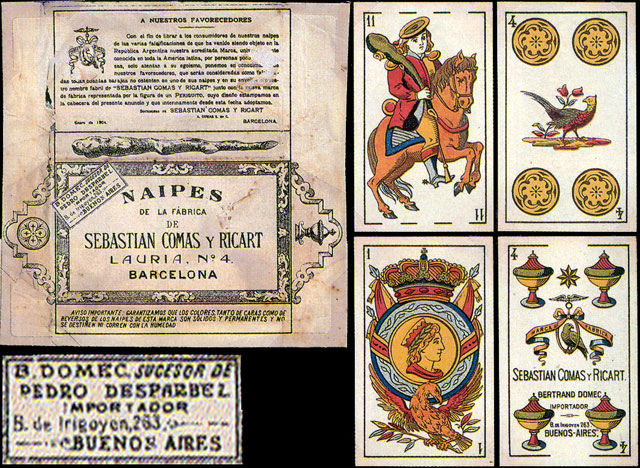 Above: four cards and wrapper from a pack imported from Spain. The date 1904 is printed on the wrapper, as well as mention that B Domec was successor to Pedro Desparbez, importer.

Over the years the name of the company, the address and other details changed until sometime in the 1970s the company was superseded by Joker S.A. who are still in business today. The succession is roughly as follows: