In 1952  E. Flaiban S.R.L. became E. Flaiban S.A. with a new address at Rio Limay 1527-29. At that time Paisanito S.R.L. was set up as a separate company at the new address, but was re-merged with the parent firm shortly afterwards in 1953. During this short period all Flaiban’s playing card brands were produced under the Paisanito S.R.L. name which can be confirmed on the aces of spades and hearts, or the four of cups (in Spanish-suited decks), jokers or tax bands. However, various discrepancies and exceptions can be found on boxes, wrappers or even aces as existing stocks were used before new ones were printed.

Above: tax bands from packs manufactured by Paisanito S.R.L. c.1952-3. Not to scale. 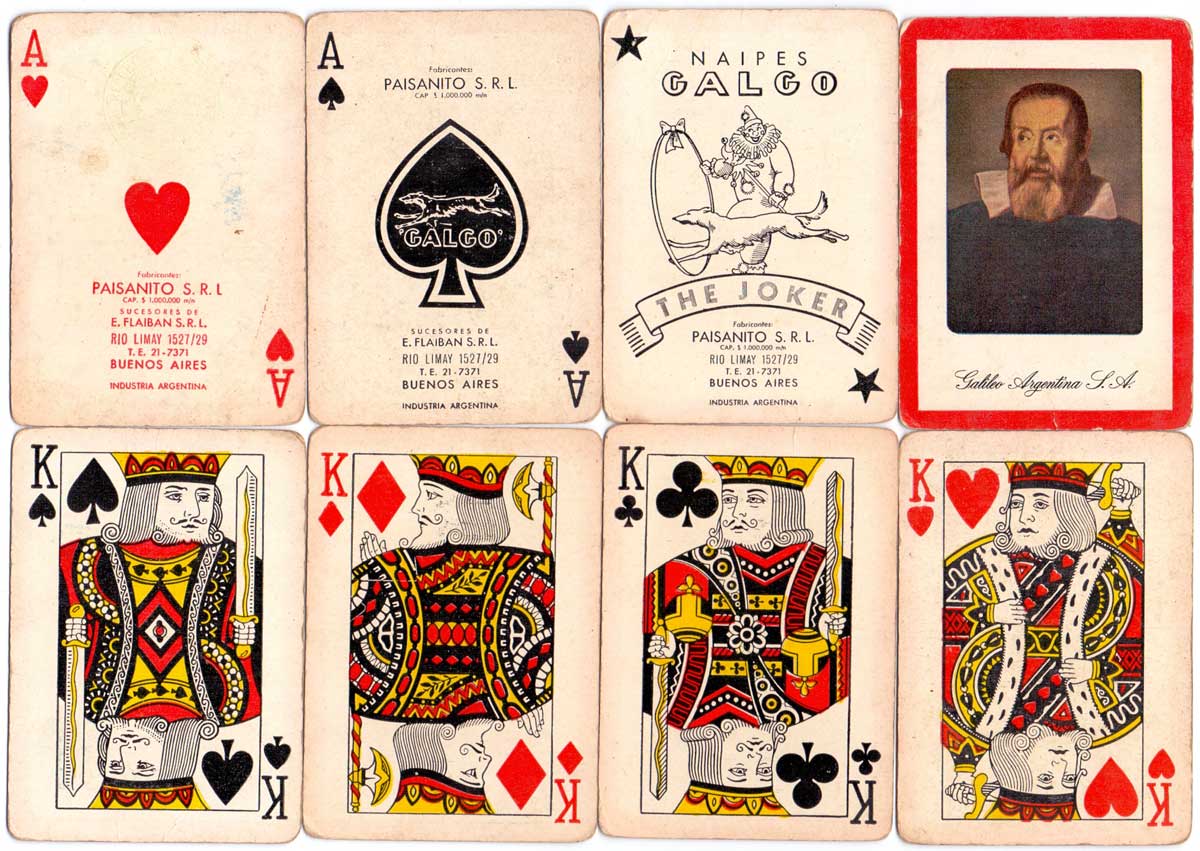 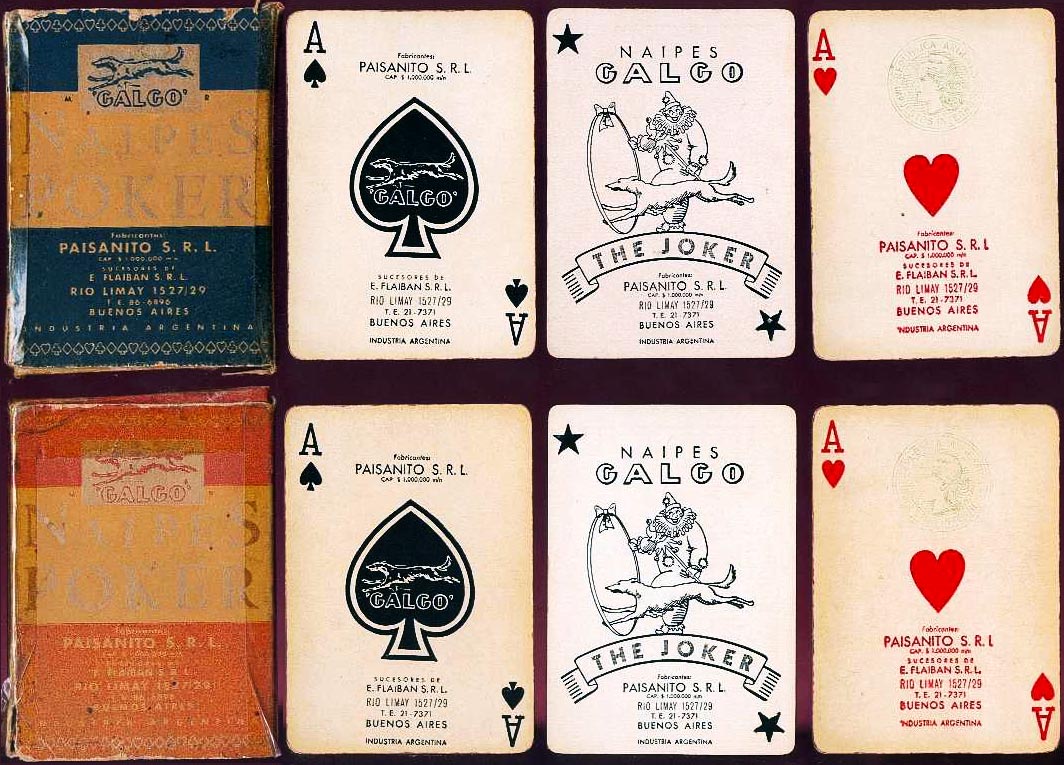 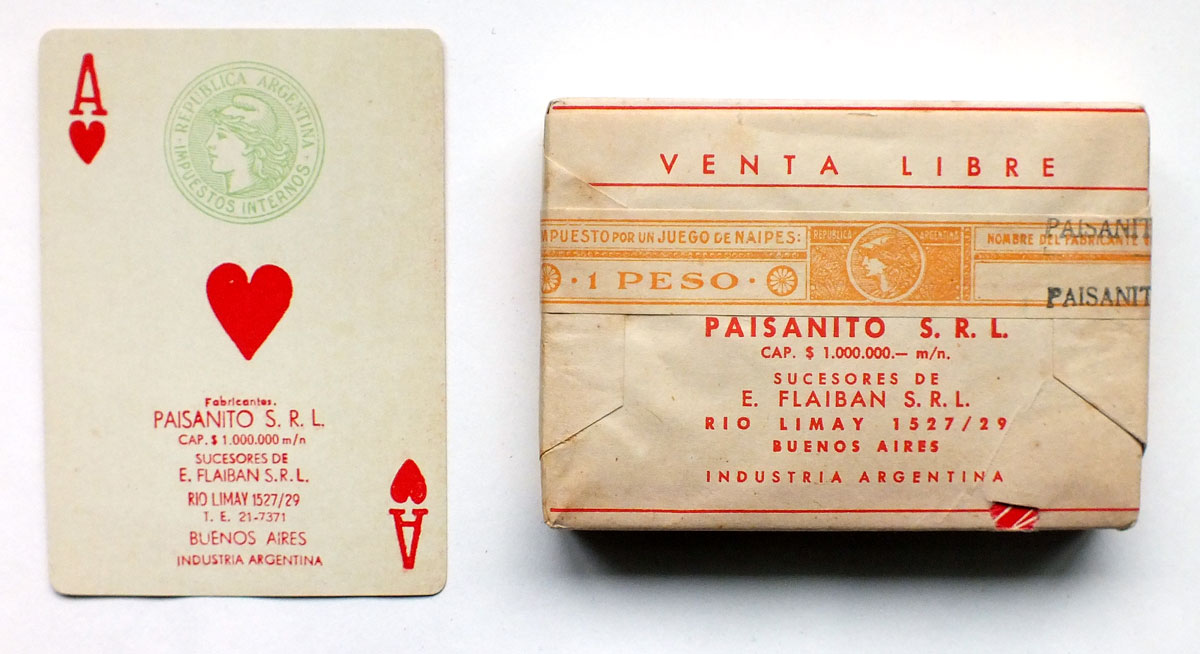 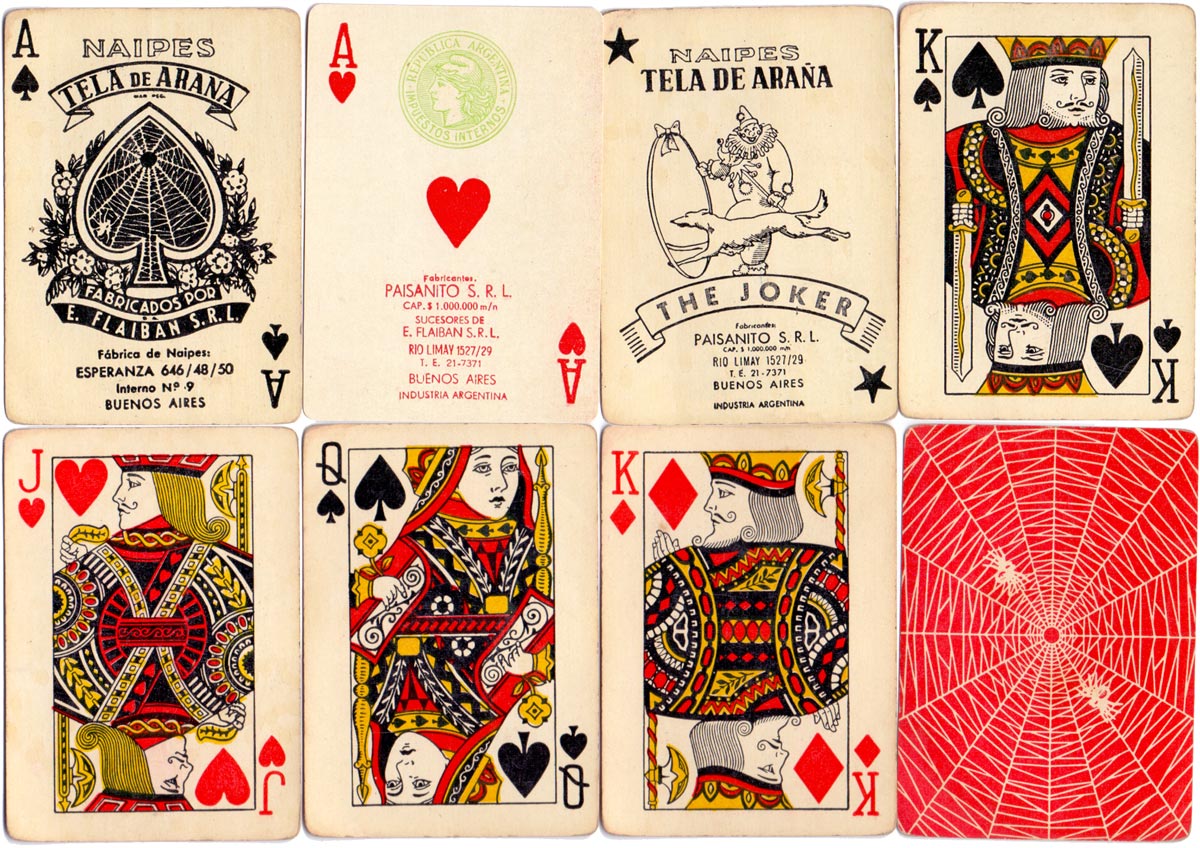 Above: Poker Tela de Araña manufactured by Flaiban during the Paisanito S.R.L. period in c.1952-53. The address on the box and Ace of Spades is Flaiban's factory address at Esperanza 646-50 but on the Ace of Hearts and Joker it is Rio Limay 1527/29. The Joker has the greyhound from the "Galgo" brand. Marianne tax stamp on Ace of Hearts. See edition in tax wrapper→ 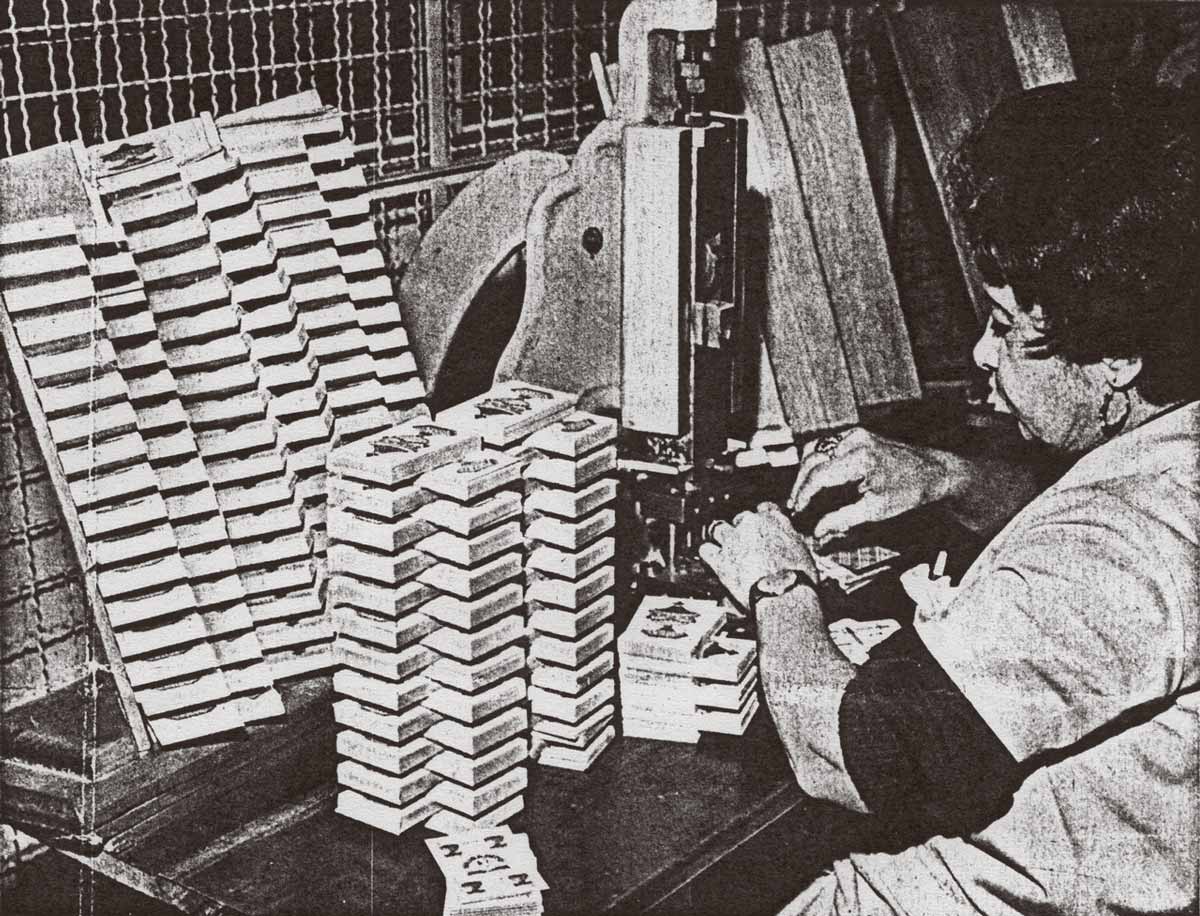 Above: once the uncut sheets had been cut and sorted into packs, the fours of cups were set aside to receive the tax stamp. [Photo from "La Nación" 2 July 1967] 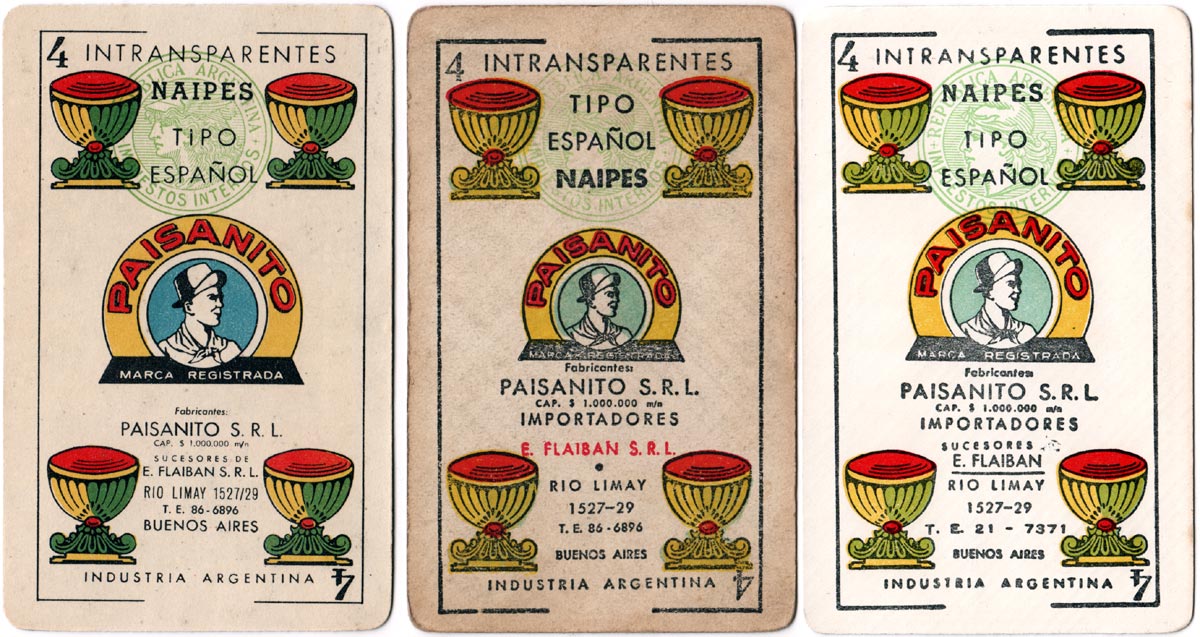 Above: comparison of fours of cups from three different editions of "Naipes Paisanito" produced by Paisanito S.R.L, Rio Limay 1527-29, Bs Aires during the period 1952-53. The left-hand example has a 'Mercury' tax stamp while the other two have 'Marianne' tax stamps. The right-hand example has a new telephone number. 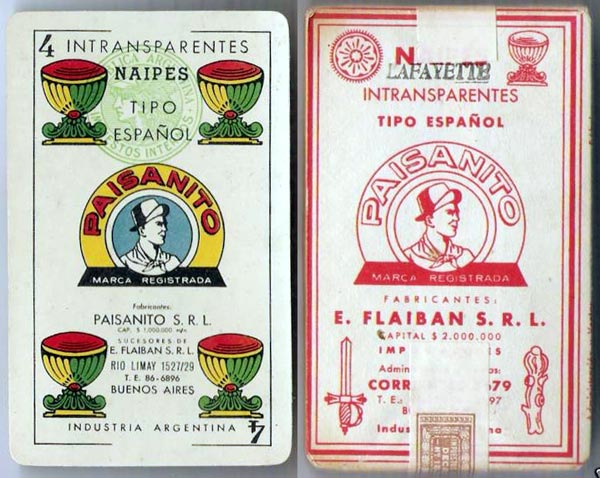 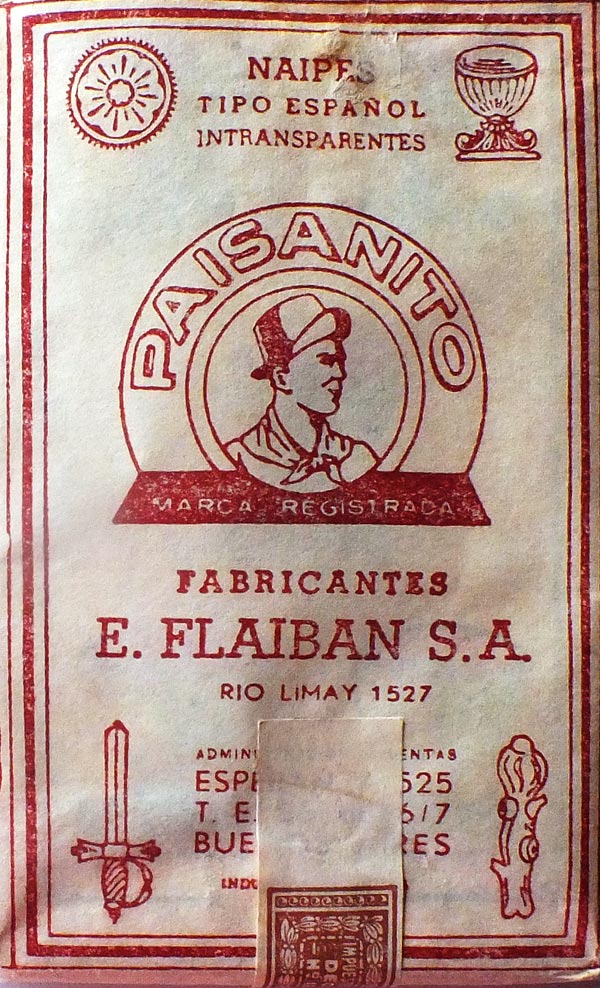 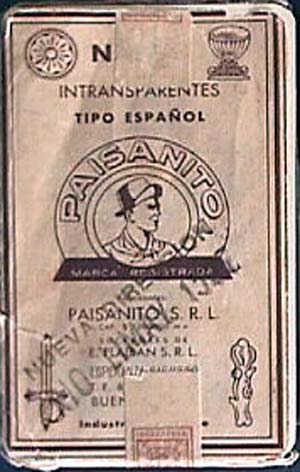 Above: wrappers from packs manufactured by Flaiban S.A., Rio Limay 1527 and Paisanito S.R.L. c.1952-3. The last one has the new address at Rio Limay overstamped onto the wrapper. 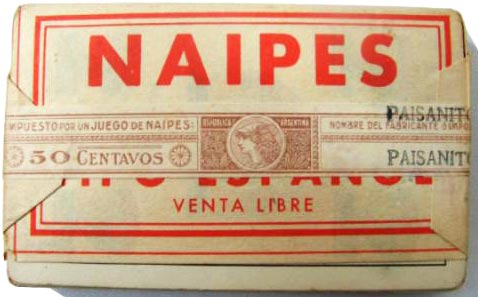 Above: wrapper and 50 Centavos tax band from pack manufactured by Paisanito S.R.L. c.1952-3.

After Flaiban S.A. closed down in 1970 the Paisanito brand was acquired by Justo Rodero e Hijos, S.A.