When supplies from Mexico or elsewhere were not available, Indian decks were manufactured on rawhide or horse skin in imitation of Spanish-suited ones. Usually they had 40 cards for playing the game ‘monte’ which was popular amongst the Indians, including the Araucanians of South America. Packs were probably also produced as tourist bait and sold to anthropologists and collectors.

Above: cards from an Apache Indian pack painted on rawhide and obtained from an officer in the United States army in 1869. [Cards reproduced in Tilley, 1973, page 72].

Above: North American Indian cards, cut out of hide and painted by themselves. [Cards in the National Museum, Washington, D.C., U.S.A. reproduced in Morley, 1989].

Above: cards painted on rawhide, believed to have been made by Mapuche Indians of Patagonia. [Cards in the collection of Museo de América, Madrid]. 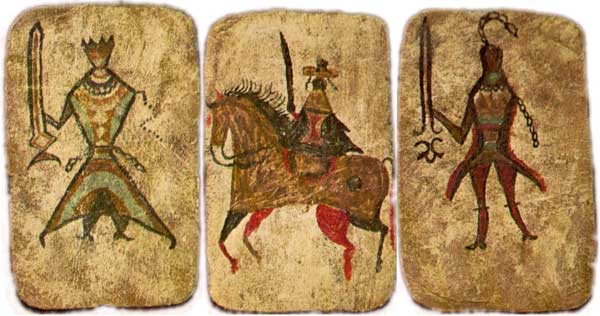 Above: cards painted on rawhide by Apache Indians.

I am indebted to Prof. Harold Wayland for his kind advice regarding the contents of this page. Click here to see more Apache cards.