The earliest Tarot decks originated in Italy in the fifteenth century, with Italian suit symbols. However the game was very popular elsewhere and tarots with French suit signs, usually called "tarok" or "tarock", appeared around 1750 which are now mainly produced in Austria. 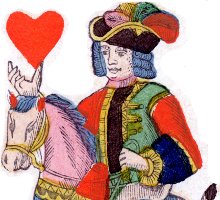 The earliest Tarot decks originated in Italy in the fifteenth century, with Italian suit symbols (cups, coins, clubs or batons and swords). However the game was very popular elsewhere and tarots with French suit signs (hearts, diamonds, clubs and spades), usually called "Tarok" or "Tarock", appeared around 1750 and which are now mainly produced in Austria. The four-suited pack with court cards King, Queen, Cavalier and Page follow the same arrangement except that the Italian suit symbols were replaced with French ones. The numeral cards were sometimes reduced so that the pack contained a total of 54 cards, instead of the full 78 cards.   See also:  Tarock deck made by Johann Herrl in Graz 1815►

Above: Cards from 54-card Tarock pack manufactured by Joseph Estel (Vienna), dated 1820 on the Ace of Hearts.   Learn more → 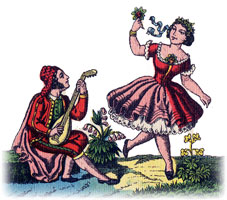 The subjects appearing on the Trumps of Tarock packs varies from the Italian prototypes. In the 18th century there was a vogue for animals or hunting scenes on the Trump cards, and later on mythological and literary subjects became popular. By the beginning of the 19th century it was possible to find almost any series of pictures on the Trumps. Very often these pictures alluded to popular proverbs, fables, social criticism, satire or heroic actions. The "Fool" is usually depicted as a harlequin. One particular series was widely copied and has become known as "Industrie und Glück" or "Rural Scenes" tarot in which the Trumps feature rural scenes and costumes from different regions. Most of these show a crowned eagle with a sword and sceptre clasped in one claw, perched on a rock with the legend "Industrie und Glück" on Trump II.

An Animal Tarock pack was published in Denmark by Jean Friedrich Mayer (1752-1783) and L.P. Holmblad published newly-designed packs depicting prominent buildings from in and around Copenhagen. The "Rural Scenes" Tarock pattern has also been used as the basis of divinatory fortune-telling cards manufactured in Argentina by Vigor S.R.L. with the title "Cartas Gitanas"►

Mary Queen of Scots and other Tudor period dignitaries, published by Piatnik, 1990.

Designed by Cesare Asaro to simulate decks from the 1700s or earlier, the Tarot of Musterberg is based on the traditional Tarot de Marseille but with an imaginary historical background.