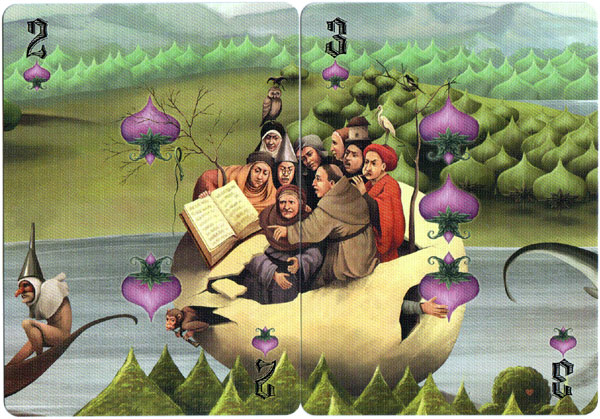 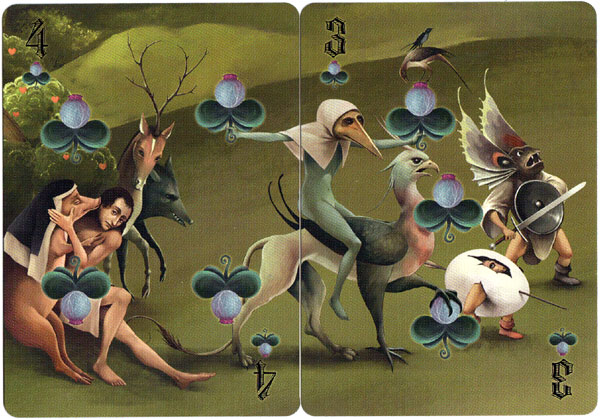 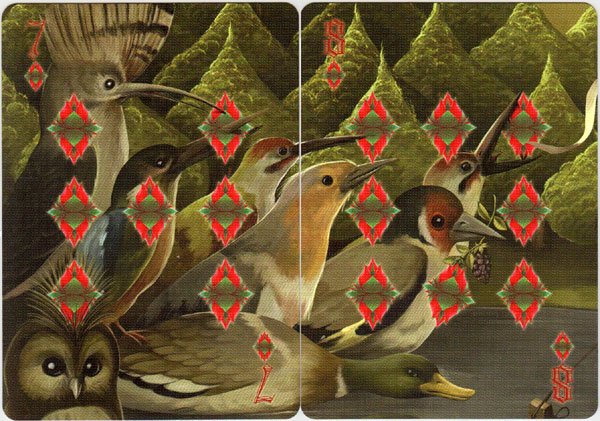 Above: real and imaginary creatures in the procession of vices.

Sunish Chabba’s Bosch Puzzle Transformed Playing Cards is much more than just a new deck. Based on the visionary world of Hieronymus Bosch (’s-Hertogenbosch, c.1450-1516) it is of course full of enigmatic imagery, as seen in the tryptych titled Garden of Earthly Delights in which worldly pleasure is contrasted with vice and corruption.

Bosch came from a family of painters. He was inspired by religious paintings and most of his themes were taken from the Bible, especially the suffering of Christ and the Last Judgement. Alongside images of piety and devotion we often see scenes of purgatory, sinners in infernal torment, and so on, including marginalia of insects, birds, real or imaginary animals or flowers*. His compositions are often divided into several sections, or polyptychs, with arbitrary variations in scale and miniature details interspersed among larger motifs.

This extraordinary playing card project involved hundreds of hours of research over 2 years. Many aspects of Bosch’s artwork have been cleverly combined in an entirely original manner. The puzzle in this deck of cards is that it can actually be formed into a complete polyptych artwork resembling a masterpiece by Bosch, taking playing cards into the realm of fine art. Each individual card has custom artwork, but all the cards combine to form a single larger picture.

The cards are also in a semi-transformational style, which is in itself an additional challenge. This means that the pips have been integrated into the compositions, making each card a self-contained picture. An additional point of interest is that the primary restriction with artwork on playing cards, which is the constrained size, has been ingeniously surpassed in this wonderful polyptych tribute to the Flemish master painter.

See the Box►   Decks can be purchased here►

In Bosch’s hometown of ’s-Hertogenbosch there was a flourishing knife-making industry. The blade between two ears symbolises those who do not want to hear to the message of salvation.

Decks can be purchased here► 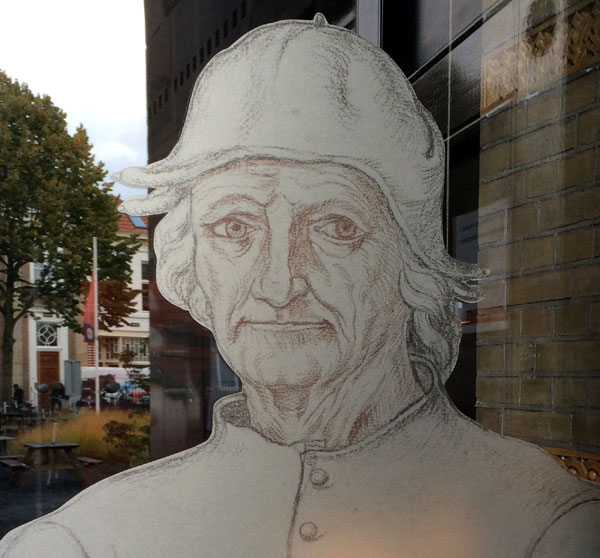