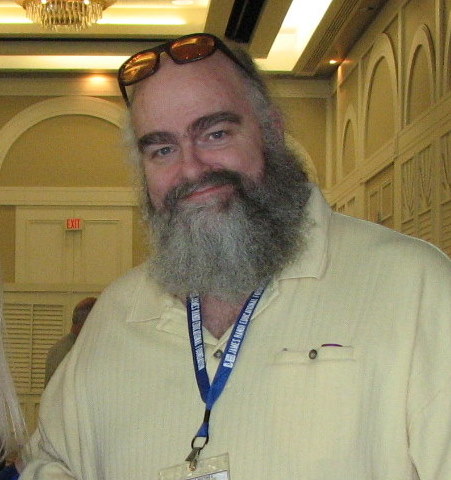 Robert S. Lancaster's first web presence was “The Bob Lancaster Gallery of Unusual Playing Cards”, a site devoted to displaying some of his large collection of decks of playing cards. The site existed from 1996 until 2008 when AOL shut down member websites   more →

How did I get involved in such an unusual hobby? A memoir by Robert S. Lancaster

One day in 1968 or 1969 (making me ten or eleven years old at the time), my mother took me on a drive to shop at the Hallmark Greeting Card store at the Eastland Shopping Center in Covina, California (about five or ten miles from where we lived.

Shopping trips had never been a frequent occurrence as I grew up, mainly because we couldn’t afford them – so this was a real treat for me, and I jumped at the invitation. This was not long after my Dad had died (of Yet Another Heart Attack), and my Mom was trying to cheer me up. As we walked into the store, I excitedly asked her if I could look for something we could buy for me. She told me that would be fine, as long as it cost less than a dollar, and she had to approve of it first.

I immediately headed for the “games” section of the store, and looked for anything I’d like which cost less than a dollar. This was a rare occasion – I could not waste it on getting something less than “cool”!

A display of miniature decks of playing cards caught my eye. We played a lot of cards at home (mostly Rummy and Solitaire), so I figured that my Mother could not object to my getting a deck of playing cards. And the ones in the display intrigued me because they were kid-sized (about half the size of a regular deck). I always enjoyed kid-sized versions of things, and regular/adult-sized playing cards were tiring for kid-sized hands to hold for very long, so I went over to take a closer look at the selection.

Each of the boxes containing the decks showed what looked to be the design on the back of the deck inside. Many/most of them were pretty boring designs: landscapes, pictures of horses – that sort of thing. But there were several which had images of Peanuts comics characters against brightly-colored, almost psychedelic backgrounds. I loved Peanuts characters, Snoopy in particular, and owned several paperback collections of Schulz’ work. And, having teenage siblings, I knew how “groovy” (this was the 1960s, after all) psychedelic colors and designs were! 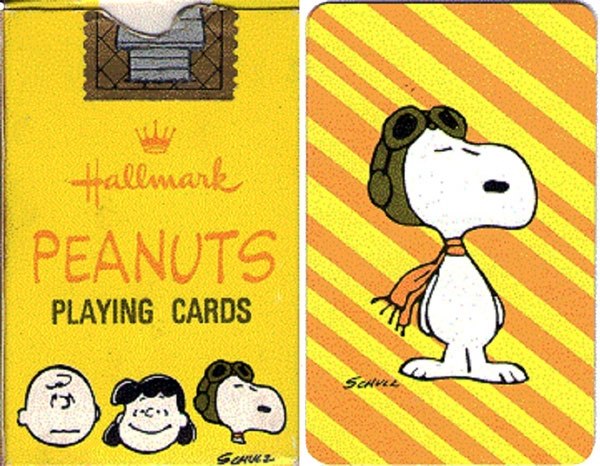 Above: the box and back design of Hallmark Peanuts mini-deck, © United Feature Syndicate, Inc.

I looked through the Peanuts decks, and picked out one which had Snoopy, dressed as The WWI Flying Ace, against a yellow-and-orange, diagonally-striped background. “Groovy” indeed – and it only cost seventy-five cents (if memory serves)! I took it to my Mom to get her approval. At first, she was not happy with my choice, saying that we already owned decks of playing cards, so we didn’t need another one.

But I explained that they were Just My Size, and THEY HAD SNOOPY ON THEM, and she relented, after first checking the price. She tossed the box into her shopping basket (Yaaay!), and we finished our shopping.

When we got home, I took the little Hallmark’s bag containing my treasure to my bedroom, plopped down on the floor, and opened the box with the deck. At first, I was disappointed because the Jacks, Queens and Kings – what we called the “face cards” in our family – did NOT look like those in a regular deck. The Jacks, Queens and Kings were Linus, Lucy and Charlie Brown!

This at first disappointed me, because it meant (to me) that the cards were not a kid-sized version of a regular/adult-sized deck, they were a toy! But when I saw that Snoopy was on the Aces – and, better still, was on the jokers (juggling four balls AND Woodstock!), the deck’s “coolness” started winning me over. It soon became well-used, with me playing countless hands of Rummy with my siblings and friends using it. And playing Solitaire no longer took up an entire coffee table to play!

The little box with the deck earned a treasured place in the top drawer of my dresser, where it was stored for the rest of my childhood.

I can tell you the EXACT DATE when I purchased the second deck in what would become my collection/obsession: December 16, 1978. I know the date because it was the day AFTER the day I got married to Cindy – my first wife. The most we could afford for a “honeymoon” of sorts was a day at Disneyland.

As we strolled up the sidewalk on the left side of Main Street (as you enter the park), there was a glass case, about the size of a phone booth (remember those?) sitting on the sidewalk in front of a store. Inside the case was an Audioanimatronic figure of a Gypsy fortune teller, seated at a table, telling fortunes.

On the table before her was a crystal ball, and an array of playing cards, laid out in fortune-telling fashion. The gypsy waved her hands above the cards, while her lips moved. Her words, played through a speaker mounted on the outside of the case, invited passers-by to pay to have their fortune told. Something about those playing cards caught my eye, and I stopped to take a closer look.

Above: Jokers, ace of spades and back design from the Disney deck © Walt Disney Productions.

Sure enough, the Jacks, Queens and Kings on the cards were NOT those of a standard deck, but were portrayed by Donald Duck, Minnie Mouse and Mickey Mouse! The joker, of course, was portrayed by Goofy. I was immediately reminded of my beloved Peanuts deck, and wondered if the deck was for sale somewhere in the park. I looked in the display window of the store we (and the case) were in front of, and saw that copies of the deck – some with a blue back, some with a red back – were for sale!

We entered the store and I bought one of the decks.

When we got home that evening, I rummaged through stuff from my childhood until I found my old Peanuts deck. I then opened my new Disney deck, and then found a plain-old, standard deck in the house, and spread the three decks out on my desk, comparing their face cards (which, I would much later learn, are more properly referred to as the court cards, or just the courts).

Above: court cards from the Disney deck © Walt Disney Productions.

I found that I really appreciated what the artist/designers had done with the Peanuts and Disney decks – they had put a new spin on an old tradition, while still leaving everything recognizable enough for play. I began to wonder if there were perhaps more decks out there like these. If there were, what a fun and different collection they would make!

I mentioned this to Cindy, and she said that she sometimes saw old decks of cards for sale in the antique stores and antique malls she frequented. She didn’t know if they would be what I was interested in, but thought it might be worth a look – I agreed, and we soon started haunting such places around SoCal together.

After I started collecting, looking through hundreds upon hundreds of decks in antique stores, thrift shops, yard sales and more, I started finding and buying, one by one, more of the Hallmark Miniature Peanuts decks with various backs, many with “psychedelic” background color schemes such as the different ones I had seen in that Hallmark store so long ago (nearly fifty years now - yikes!). Later, I would find even more of them online (mostly on eBay). I am attaching scans of the various backs, but your readers should be forewarned, if they go looking for one, wanting to obtain one with custom courts, Aces and Jokers shown above - NOT ALL HALLMARK MINIATURE PEANUTS DECKS WITH THESE BACKS HAVE THE CUSTOM COURTS, ACES AND JOKERS, so take a look at the cards before purchasing! 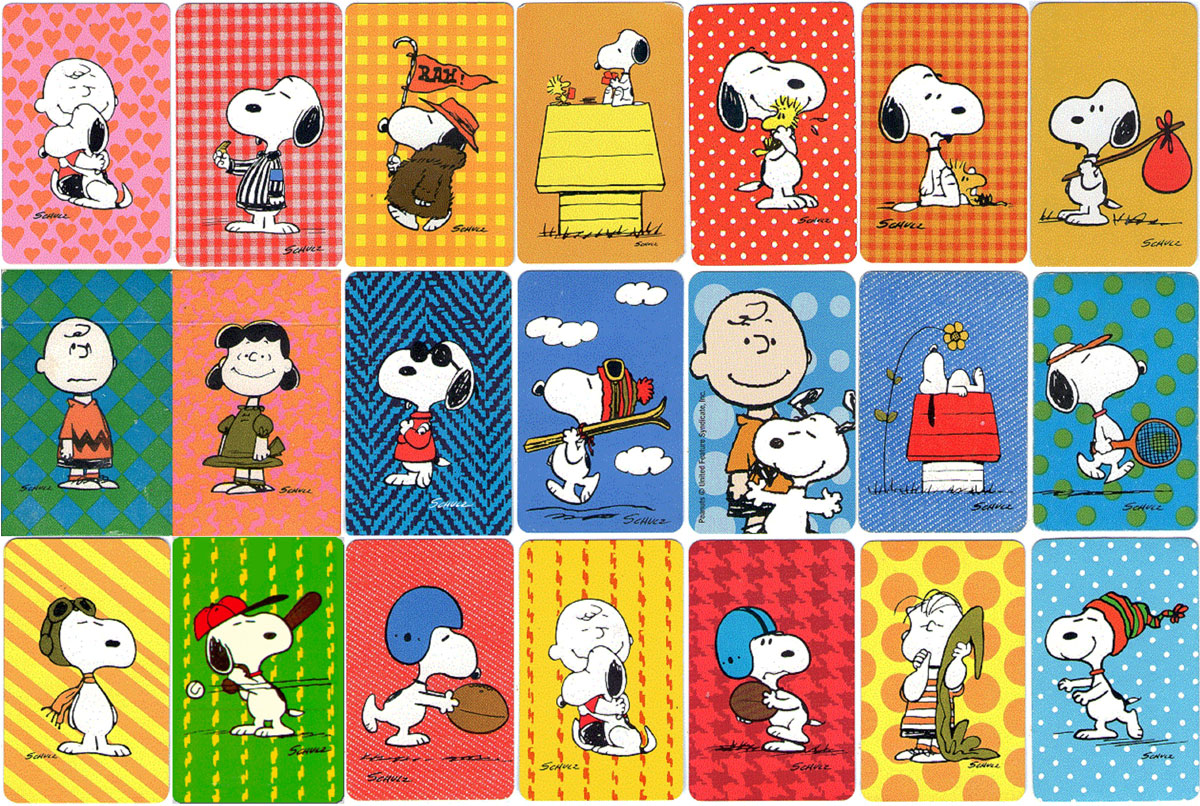