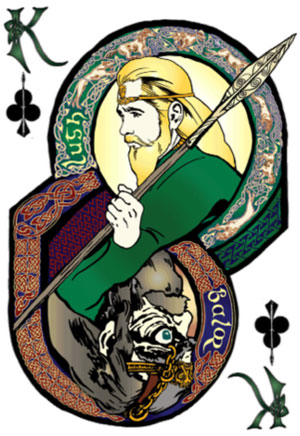 The cards in these decks are rich in symbolism, celebrating the Celtic pantheon of mythological Gods, Goddesses, and heroes. The cards contain an enormous amount of detail which is backed up by scholarship and each image is captivating and draws your attention deeper into the design. The cards are of excellent quality with nice sharp print registration and each card obviously had a lot of time and devotion dedicated to it... nothing to be disappointed by!

Asymmetrical Version   (different at each end)

There is an inherent duality in Celtic culture that celebrates both the dark and the light, the force of human social values balancing the forces of nature, and the contrast between what we understand and what may be hidden in the supernatural. This duality is represented in the artwork in Cultúrlán’s asymmetrical playing cards. Celtic culture recognizes the need for both creation and destruction in human society. The purpose of Lugh and Balor, both kings of Ireland, was to provide abundance to their families through distributing their wealth, and to create the means for supporting their clans over many generations.

Above: in the asymmetrical back design the cauldron sits at the base of a bile, a sacred tree that in early Ireland would often have been associated with a specific family, the basis (in our opinion) of the idea of a “family tree”. Entwined in the roots of this bile are the four animals of early Gaelic society: the horse of kingship, the bull of wealth, the boar of prophetic heroism and the hound of warriorship [taken from the notes on an extra card in the deck].

The cards in this symmetrical deck (same each end) feature the ‘light’ characters in the asymmetrical deck. Each image is captivating and draws your attention deeper into the design. 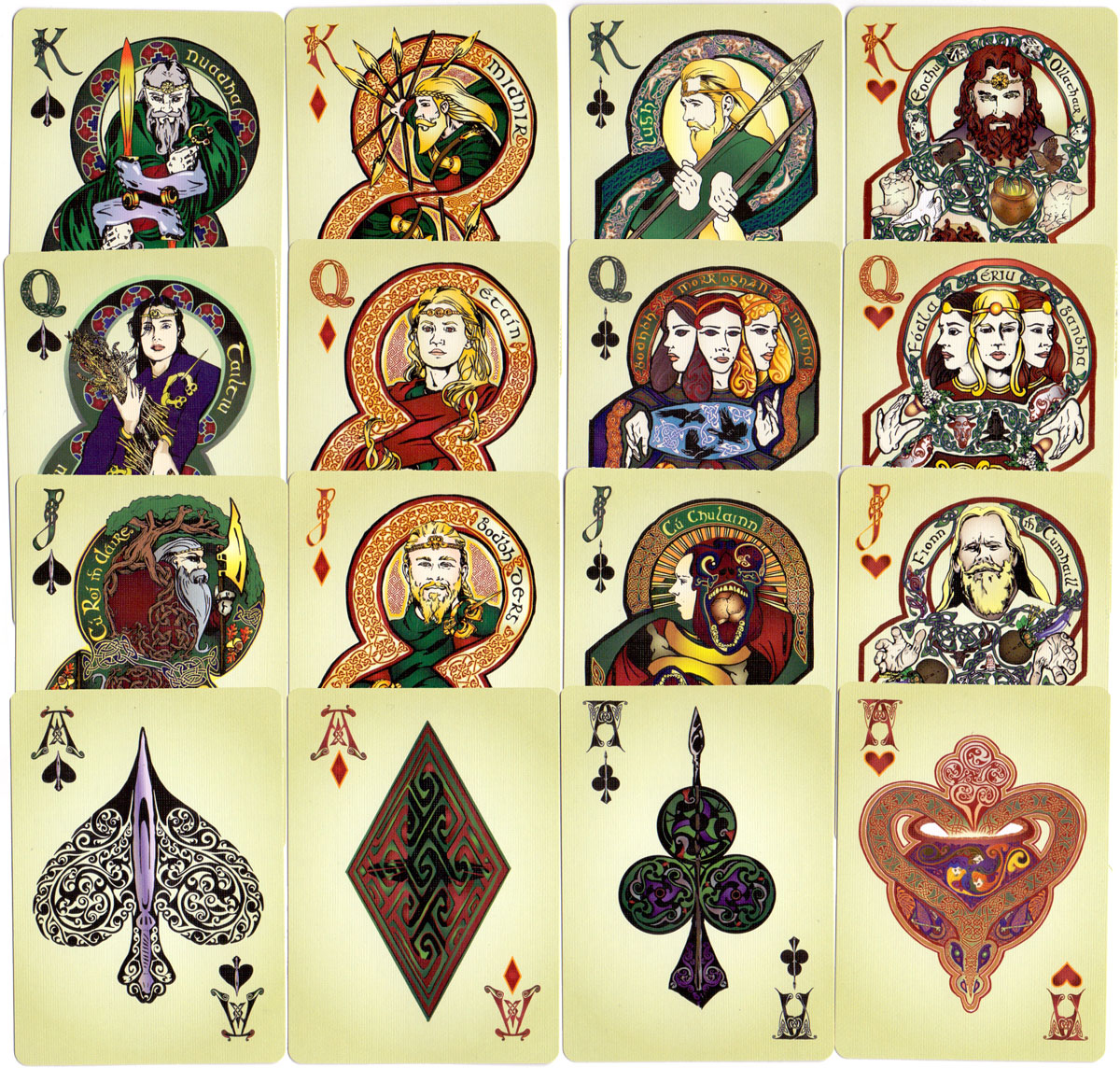 Above: the symmetrical card back is more mathematical than the asymmerical back, with eight clearly delineated cauldrons spilling into a ninth implied cauldron at the centre. The suit of spades is based on the Sword of Nuadha. This sword was brought from the Otherwordly city of Finnias where the poet-sage Uiscias presided. Like Lugh's spear, it was unstoppable in battle and is probably connected somehow with Caledfwlch, the legionary Welsh sword that would eventually become Excalibur, the gift of the Lady of the Lake. The Joker shows a monstrous boggart, related etymologically to the Welsh bwci and the Irish púca, wearing the traditional Gaelic clothing of sixteenth century warriors while juggling nine objects. Manufactured by the United States Playing Card Company, 2014.

Cultúrlán's third and final deck in this series of cards is scheduled to be ready for Bealtaine. With images faithful to original Irish, Scottish, and Welsh tales as preserved in medieval tradition, these new symmetrical decks are meant to fan the embers of interest in myth that glow around the world, and coax into flame that old pleasure in ancient lore...

Reviewed by Sean A. Parry.