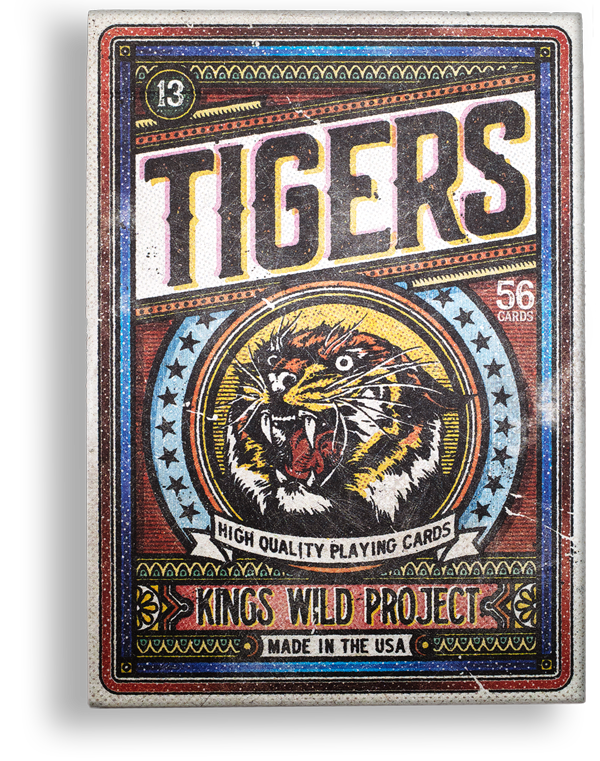 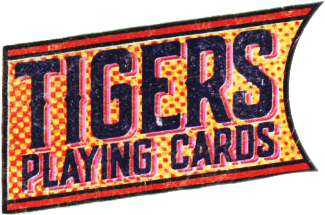 The Kings Wild Tigers Kickstarter campaign was successfully funded in just two hours, and was selected as a Kickstarter Staff Pick. The campaign raised a total of $59,235 from 931 backers in August, 2018.

Kings Wild Tigers has had three editions, The First Edition, The Matchbox Edition, and the Second Edition (reviewed here), each with uniquely designed boxes, and also various gilded, gold, and silver editions along the way. The Matchbox Edition’s is a matchbook-style box rather than an ordinary tuck box. Above: Matchboxes that depicted wild creatures and had a colourful design influenced Robinson's work.

Robinson says the deck pays homage to the beautiful world of matchbox printing that was popular in the late 1800s to early 1900s. Matchbox designs from around the world of this era often featured wild animals such as monkeys and tigers. These were overlooked colorful pieces of artwork. Robinson says “I find it so interesting that so much beauty and variety can be found in material that at the time was produced to be “thrown away”. The project is an artistic study and creation in the form of playing cards. A lot of time and devotion goes into the art of these matchboxes, they’re just disposable items, and yet they were really beautifully crafted.” Robinson wanted to create a deck which highlighted many of those styles.

Rod Starling points out that the Tigers brand was a series which included Sportsman, Army, Navy and Congress, all of which were “purely American names which departed from the traditional English names”. Starling explains: “Tigers No. 101 was their first brand. It was the least expensive. Initially it was issued with a generic Russell & Morgan Ace of Spades without a brand name or tiger motif, even on the box.” However the brand became popular and well known for its distinct motif of a snarling tiger's head inside a design of circles and suit symbols.

Above: A selection of “Tigers No.101” playing cards manufactured by Russell & Morgan Co. The Joker features a snarling tiger's head inside a design of circles and suit symbols. Images courtesy of Rod Starling.

Tigers No. 101 was printed numerous times over more than a decade and was instrumental in launching Russell & Morgan Co., which was later acquired by the United States Playing Card Company (USPCC).

The Kings Wild Tigers deck incorporates many design elements from the original deck, which, when combined with the brightly coloured matchboxes, creates an eye-catching design.

The box has a patriotic “Americana” colour palette, and includes full color printing inside the box with a band that says Kings Wild Tigers and a pattern of stars and stripes. The back of the box matches the back of the card design.

The bottom of the box (see bottom ) includes Robinson’s signature bible verse, 1 Thessalonians 4:11, which can be found on all of his decks: “Make it your ambition to lead a quiet life: You should mind your own business and work with your hands, just as we told you, so that your daily life may win the respect of outsiders and so that you will not be dependent on anybody.” The box also has a custom tuck seal (shown to the right) which is reminiscent of the original Russell & Morgan Tigers No. 101 deck, and the inside of the tuck flap reads “Strike Once. Strike True” and in the First Edition the text here reads “Work With Your Hands.” which is part of Robinson's signature bible verse.

To give the impression that it has seen some use, both the box and the cards have been designed with a distressed aesthetic.

The two jokers are a nod to the original Russell & Morgan Tigers deck, both jokers feature the circular image with the snarling tiger surrounded by the four suits. One of the jokers incorporates a Kings Wild stamp in the design (see joker ), similar to early tax stamps which signified the appropriate tax had been paid.

The deck features two gaff cards (see below). The first is the matches card, fitting in with the theme that the deck is a box of matches, and could be used as a prop in magic tricks. The second is the full verse of 1 Thessalonians 4:11, one of Robinson’s signatures which can be found on many of his decks.

All the courts have fully custom designs (which are loosely based on Goodall courts), which are stylised like tigers. The card layouts are completely recognisable, although they look interesting and different, they are still suitable for card playing.

The Tigers series is considered rare among luxury deck collectors, with prices ranging from $30 for a standard first edition to $528 for The Matchbox Gold Edition signed by Jackson Robinson on eBay. 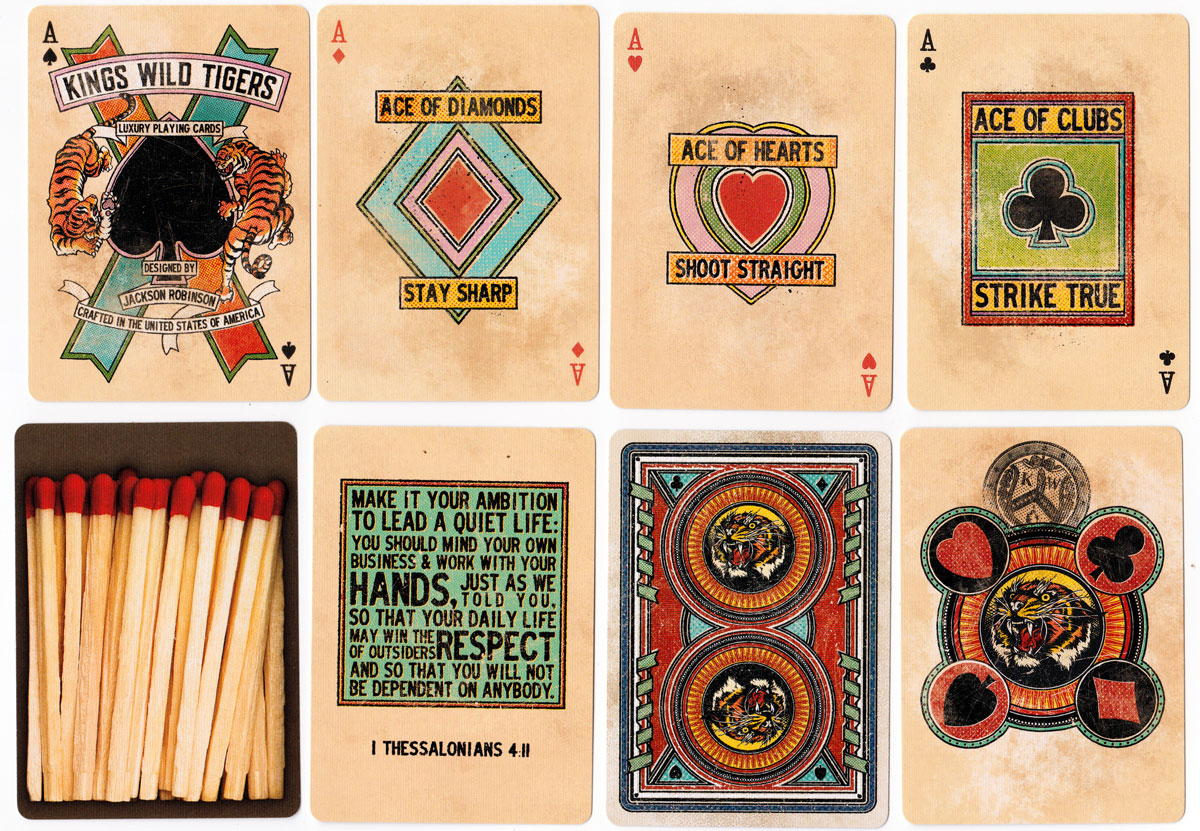 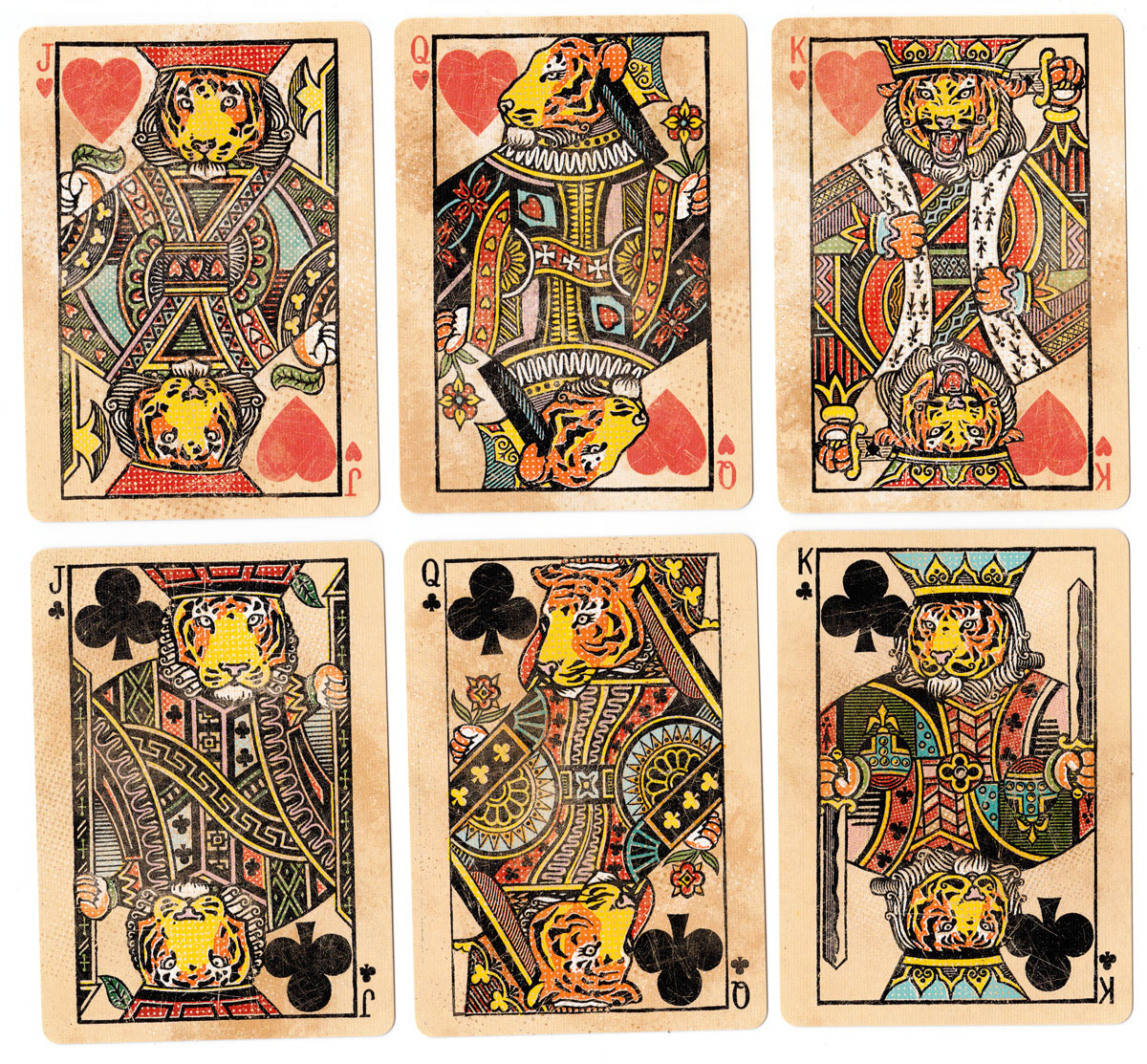 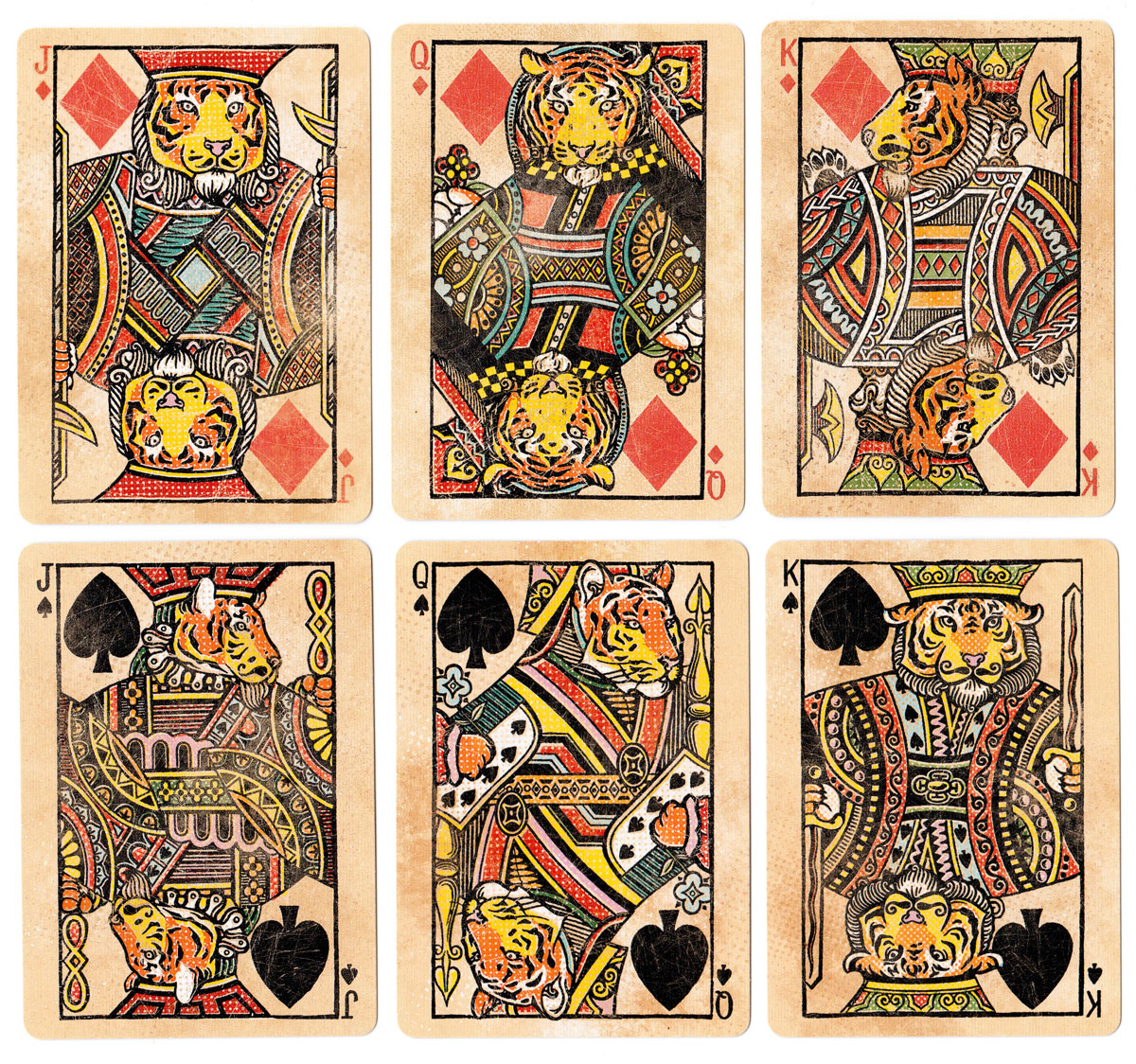 This pack was designed by Oksana Ternavska and first published in 2011 as a supplement to the book "Eneida", a poem written by Ivan Kotliarevsky in 1798.