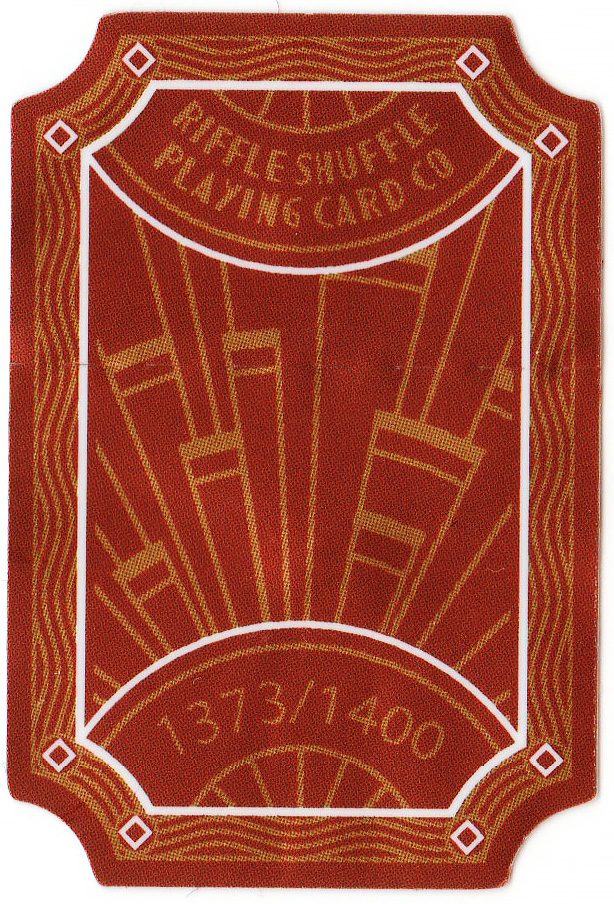 Above: plastic seal in the Art Deco style, including proudction number in the print run. See the seal on the box.

The Grand playing cards produced by Kevin Yu under the Riffle Shuffle Playing Card Company brand name are a luxury collectible deck, with foil on both sides of the cards, embossed paper with gold and silver foils on the box. Throughout this production there is an enormous focus on the gold foil.

The deck was funded by a Kickstarter campaign, where 884 backers pledged CAD$104,453. Yu explains that the cards have “a luxurious feel, with gold and silver foil on the backs and faces of the cards”. The concept is inspired by the "shiny world of the Great Gatsby" evoking the atmosphere of a 1920s party with the lavish Grand Hotel as a setting.

There are three variations in the set, the Golden Glamour Edition, the Silver Allure Edition and the Chinatown Edition. Each edition is limited to 1,400 decks with a foiled and numbered seal. The cards are manufactured by Cartamundi using their “soft-touch” paper, a thinner proprietary stock. There are 55 cards in the deck: 52 playing cards, 2 jokers, 1 gaff card.

The Chinatown Edition (reviewed here) is fully foil-printed. The back design features additional copper and gold foil "made to dazzle", and the number cards are designed with a distinct Art Deco flavour, and of course enriched with gold and foil. The Art Deco style, popular in the 1920s, is characterised by its bold geometric shapes and patterns. 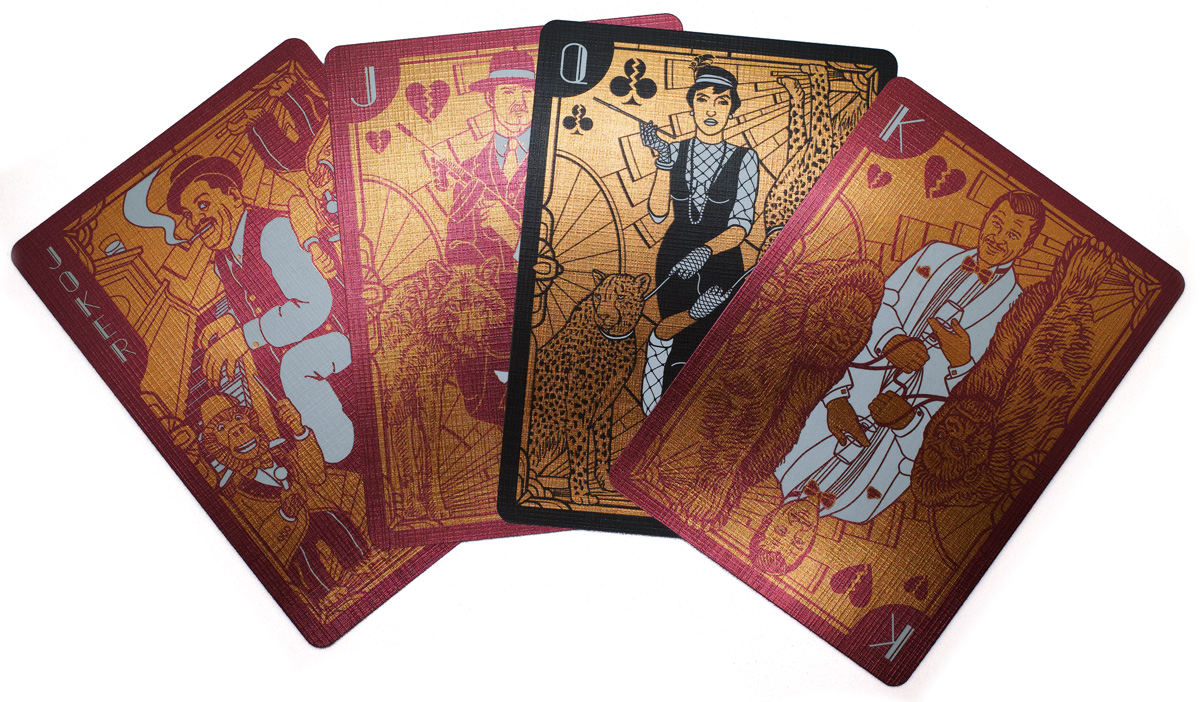 The court cards are inspired by the “characters that frequented the Grand Hotel - elegant ladies, sleek gentlemen and dangerous looking mobsters” explains Yu in the Kickstarter campaign. The courts are also decorated with gold and silver foil and feature powerful and intimidating animals alongside each character.

The jokers feature a pianist in a smokey jazz lounge with monkeys dressed in a porter boy's attire.

This pack of cards is perhaps the most gilded pack I have ever seen. The front and back of every card is fully foiled with copper and gold foil. The inside of the box is foiled as well as the outside. Be careful when handling the box, the foil is not consistent in quality and flakes easily.

The intricate and detailed design is over-the-top and not suitable for playing card games. The gold and silver foil makes it difficult to see the card value, and it's hard to tell the difference between the number and court cards.

However, this set ticks many boxes for the luxury deck collector, with special emphasis on the metallic foiling on the cards and the box which will "dazzle in your hands". 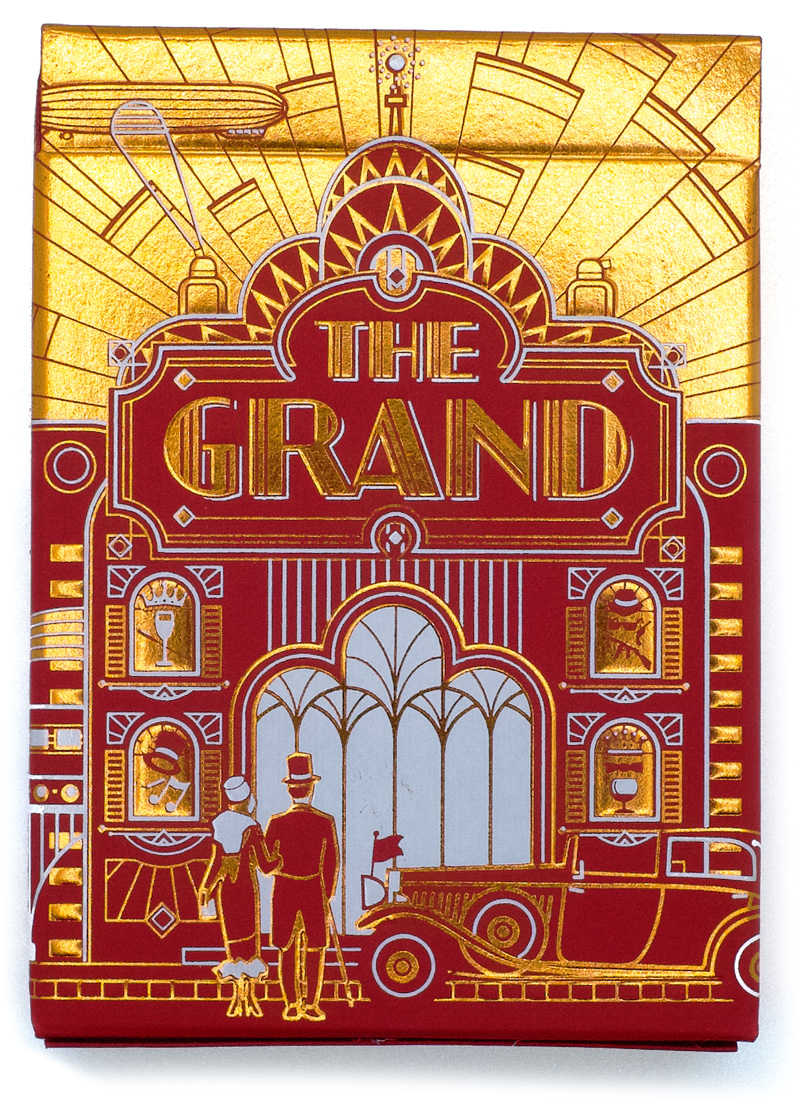 Above: the front of the box. Printed on thick red stock, embossed with gold foil. 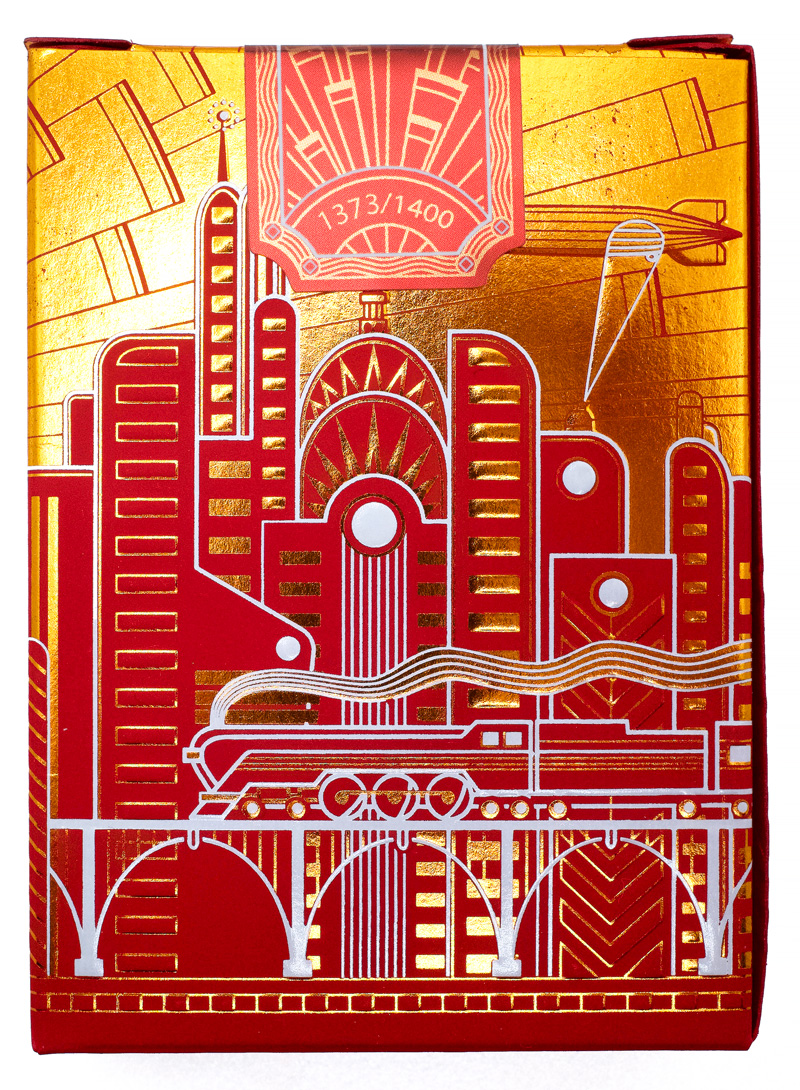 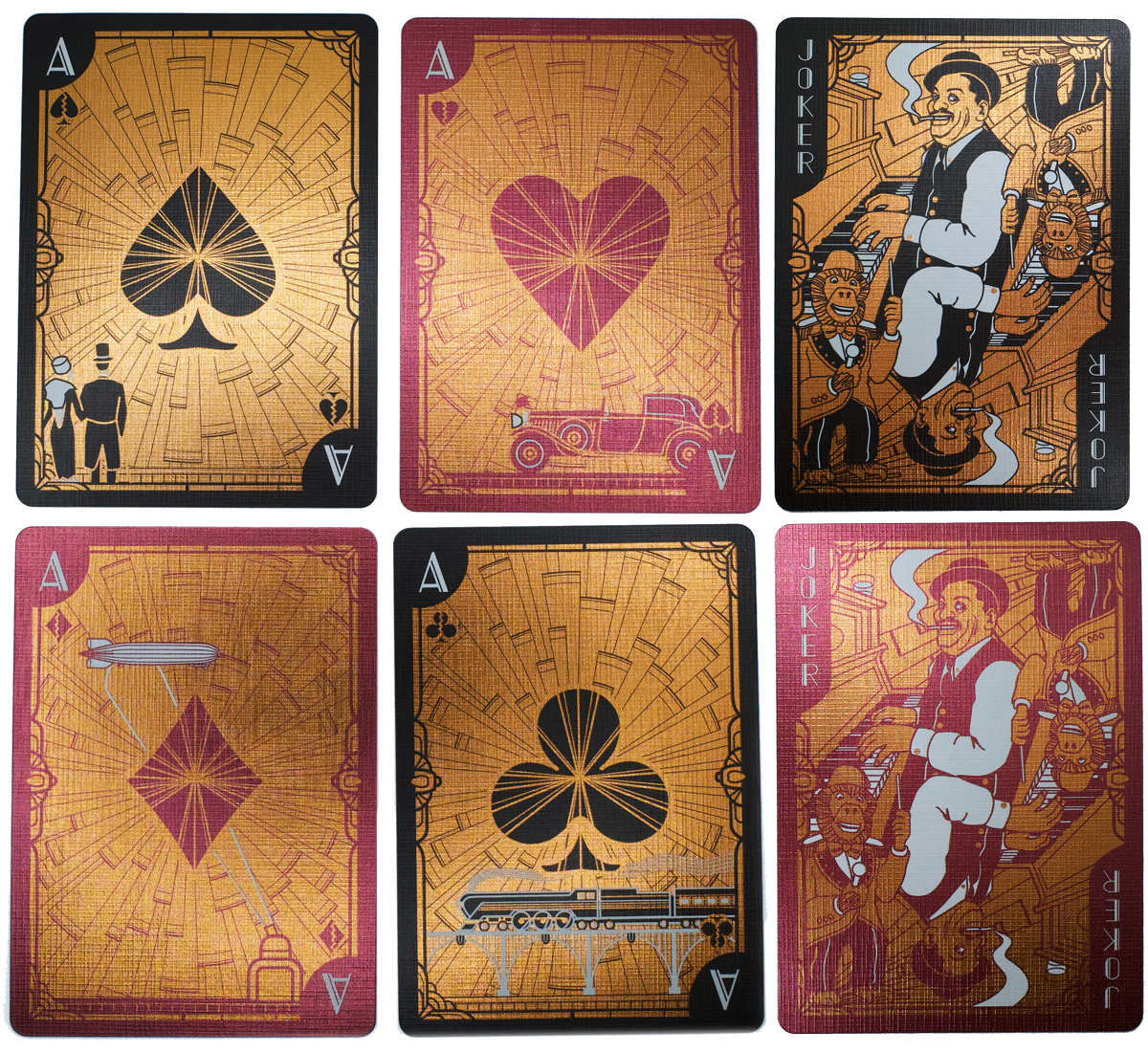 Above: the aces and the jokers illustrated in a retro style, which are "decorated with a design of a happy man sitting at a piano". This pack was designed by Oksana Ternavska and first published in 2011 as a supplement to the book "Eneida", a poem written by Ivan Kotliarevsky in 1798.

Gods of Egypt playing cards dedicated to the culture of Ancient Egypt.

The Deck of Cards

I Can’t Believe It’s Not Butter!