On pages 28 and 29 I looked at number cards by De La Rue and James English, respectively, in order to help with dating and to show index variation. At first sight the number cards of standard English packs might not be the most exciting of topics to devote a whole page to. Compare this with those packs, some of which are standard regional patterns, which do have decorative number cards, for example the German regional patterns and tarot packs. And there are all the non-standard and transformation cards, too. Here's a selection. 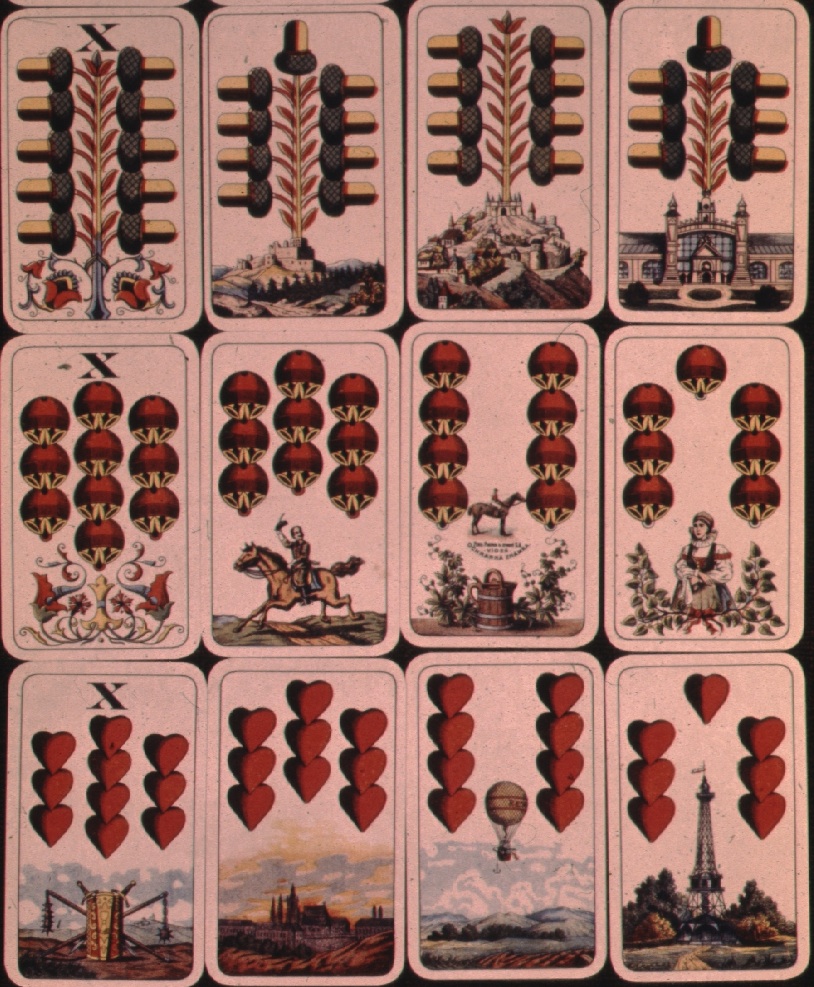 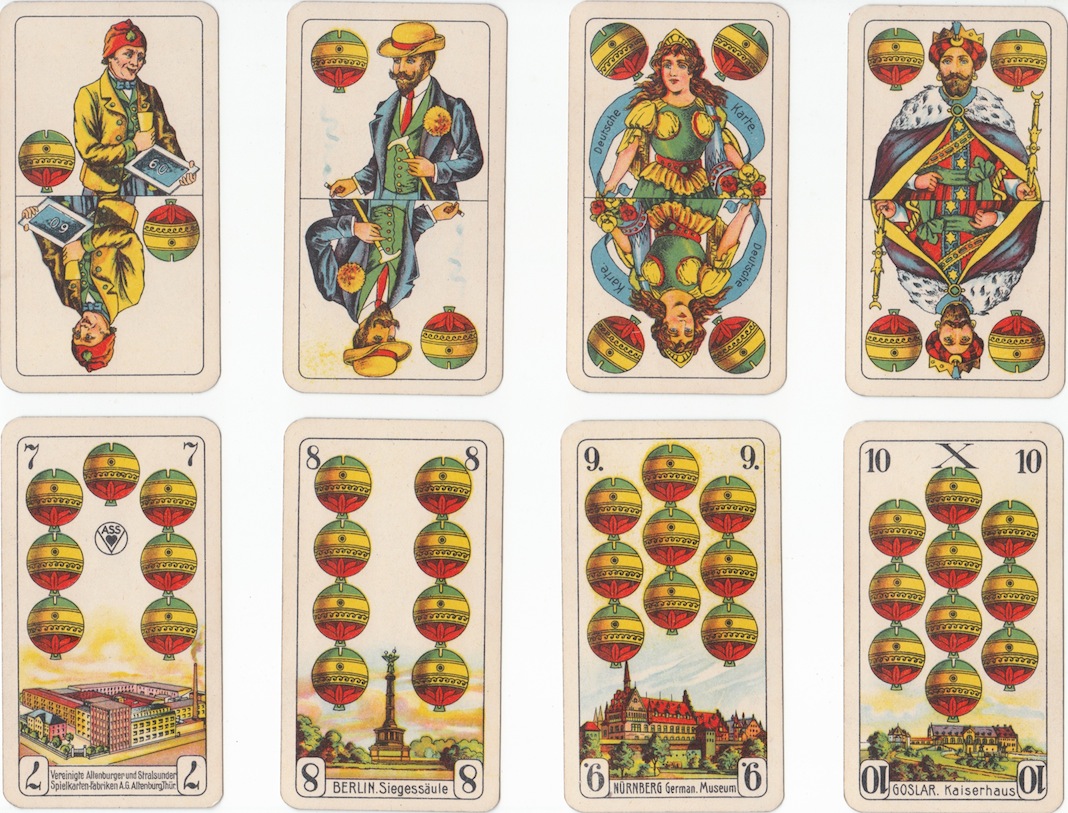 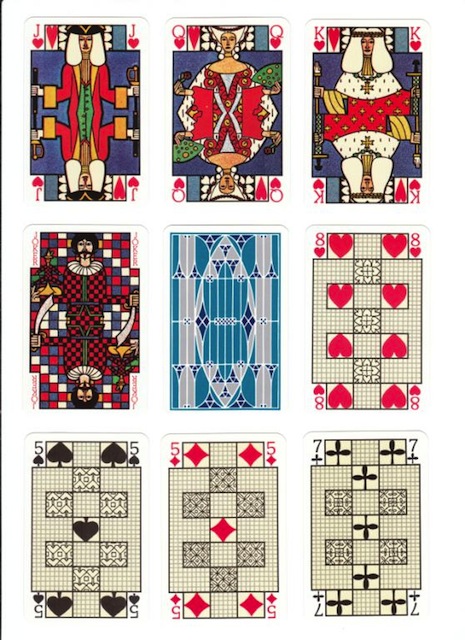 Above: the Jugendstil pack (reproduction) 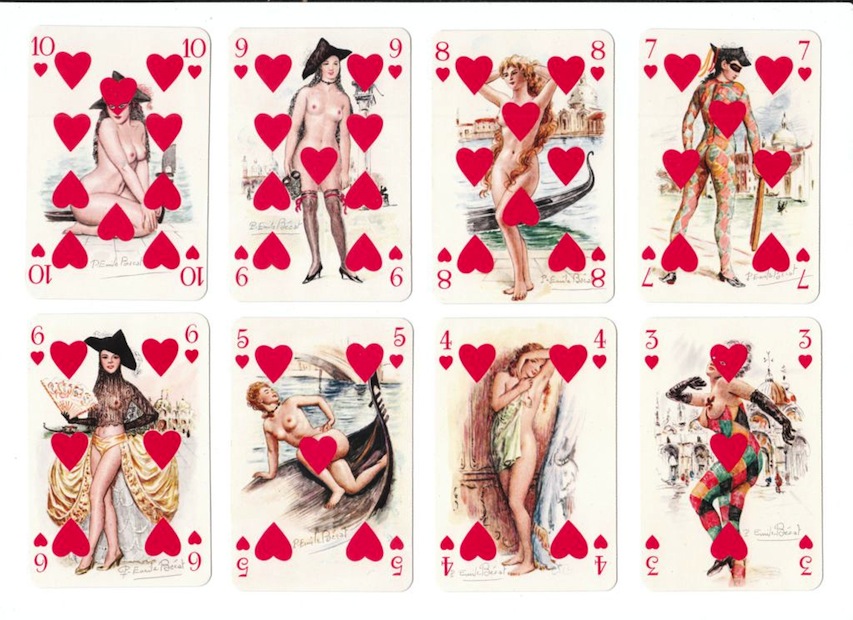 Above: Casanova by Philibert 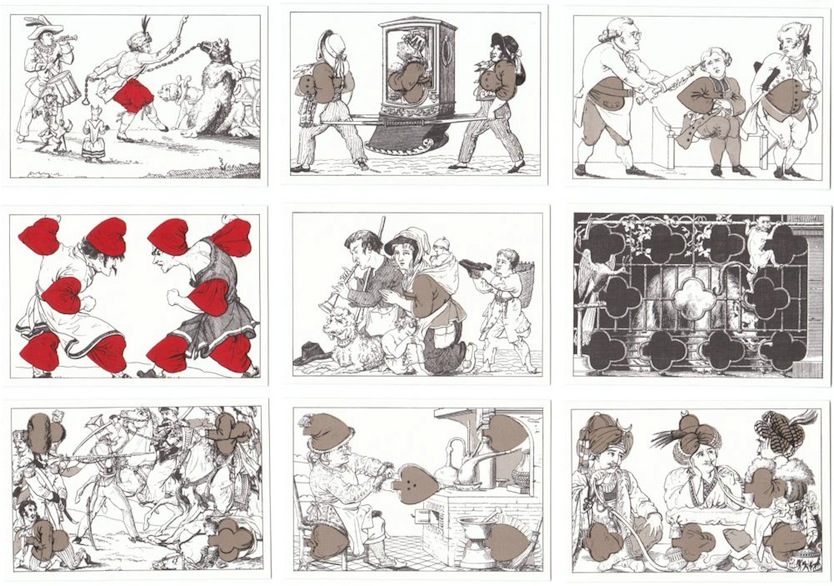 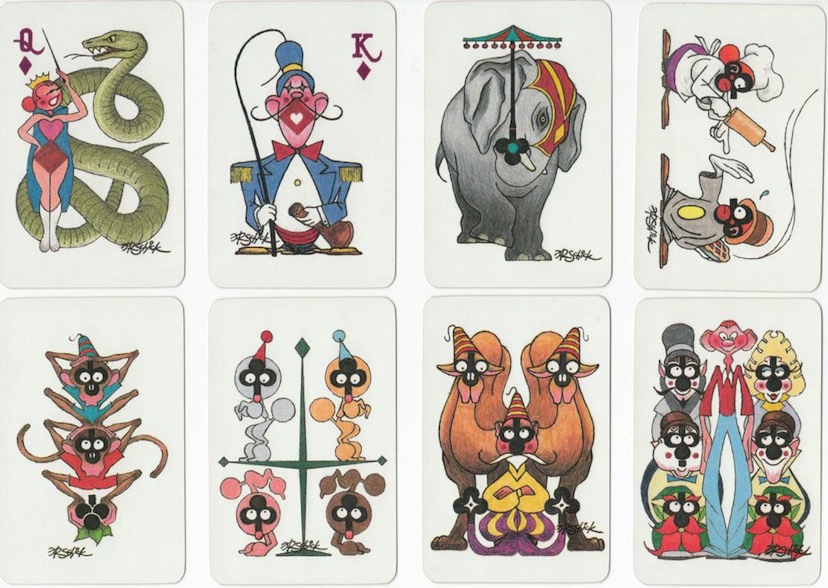 Above: modern transformation by Schick

[Thanks to Rex Pitts for most of the above illustrations.]

However, it's quite instructive to look at the history of number cards and to realize how little variation there is. First of all, it's quite remarkable to note that the basic arrangement of the pips on both English and French cards goes back several hundred years. The English pattern inherited the pip arrangement of the French regional patterns, so single-ended pip cards were the same for many different patterns. This arrangement was exported to wherever the French patterns were used. The one exception is to be found in the United States, where several makers had sevens with the central pip at the bottom rather than at the top of the card, though this could be inconsistent within one pack. 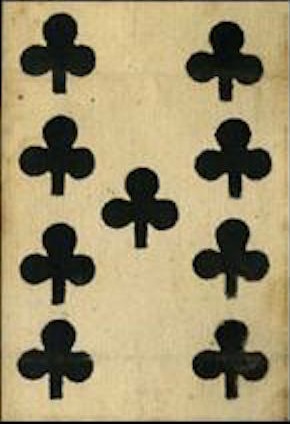 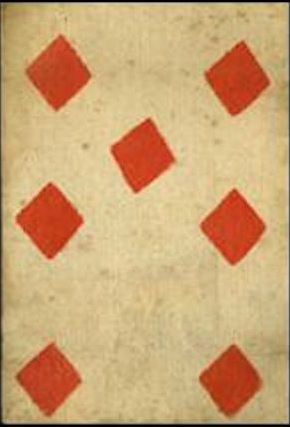 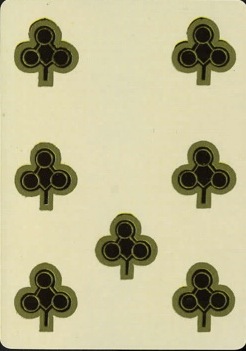 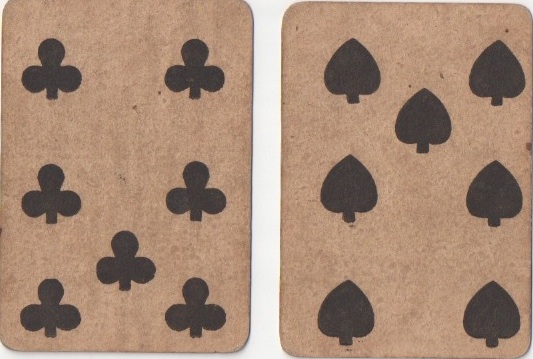 Above: US 7C by Dougherty, here with added illumination; and black sevens from a Crehor pack by Dougherty

It's sometimes possible to find English pattern cards with the French arrangement, if they have been made in France or some other European countries. It's also possible to find packs from America and elsewhere in which the sevens are variable between 4/3 and 5/2 for no apparent reason. I even have a De La Rue patience pack like this, whereas most examples of his are consistently 5/2.

Above: two sevens from a Dougherty pack of c.1860; a rare example from USPCC of c.1900, usually they were consistent with the English arrangement.

Interestingly, the one English firm that experimented with different ways of double-ending was Bancks Brothers. Late in the Old Frizzle period they had a small-format double-ended pack with turned courts (HB4) in which the number cards are divided diagonally, as in France.

A little later the firm tried a different method in which all the pips on one side of the card went one way. These are full-size packs with double-ended courts.

Above: Bancks HB1.1 with unusual orientation of double-ended pips, c.1870

Oddly, though, most of the later Bancks packs with double-ended courts had single-ended number cards, even those with HB6 printed by letterpress.

Clearly we are dealing here with an arbitrary tradition, but one which is fairly well adhered to. In cases where producers are not au fait with the tradition, all sorts of arrangements can occur. Makers recently established sometimes break with tradition: Richard Edward, in his early packs of c.1995-2000, arranged his pips in a very odd way, even using the traditional positions. Below, the arrangement on the seven is 5/2 but the gap between the two sets of suit signs is rather large; the eight is 4/4, not 5/3, and the nine is 5/4, but with the central pip at the top not in the middle.

Games & Print Services used the American arrangement on their sevens: 4/3 in their earliest packs.

The pip cards of the American reproductions of the Pierre Maréchal pack and the English single-figure pack (wrongly ascribed to a non-existent Bamford) using the illustrations from Gurney Benham's book are not in the least traditional; they illustrate a complete lack of observation.

And this brings me to Chinese Crackers. English playing cards are not traditional to the Far East, even though they've been accepted there in the course of interactions with Britain and the US. As we know, playing cards are now produced in their millions in China, Hong Kong and Taiwan, as well as Japan and India, but there is evidence that the tradition is still meaningless to those who actually design them. I'm still working on pages dealing with the court designs to be found produced in China and there are several oddities amongst them. But the number cards also come in for some rearrangement, which is quite difficult to explain as anything other than an arbitrary whim. Even though the vast majority of packs are just like their models, there are some unusual ones, such as those below. My favourite is the 10D that's actually the same as the 9D with a 10-index! And the 10S and 9S are also odd in that they are 3/2/2/3 and 2/2/3/2, respectively. 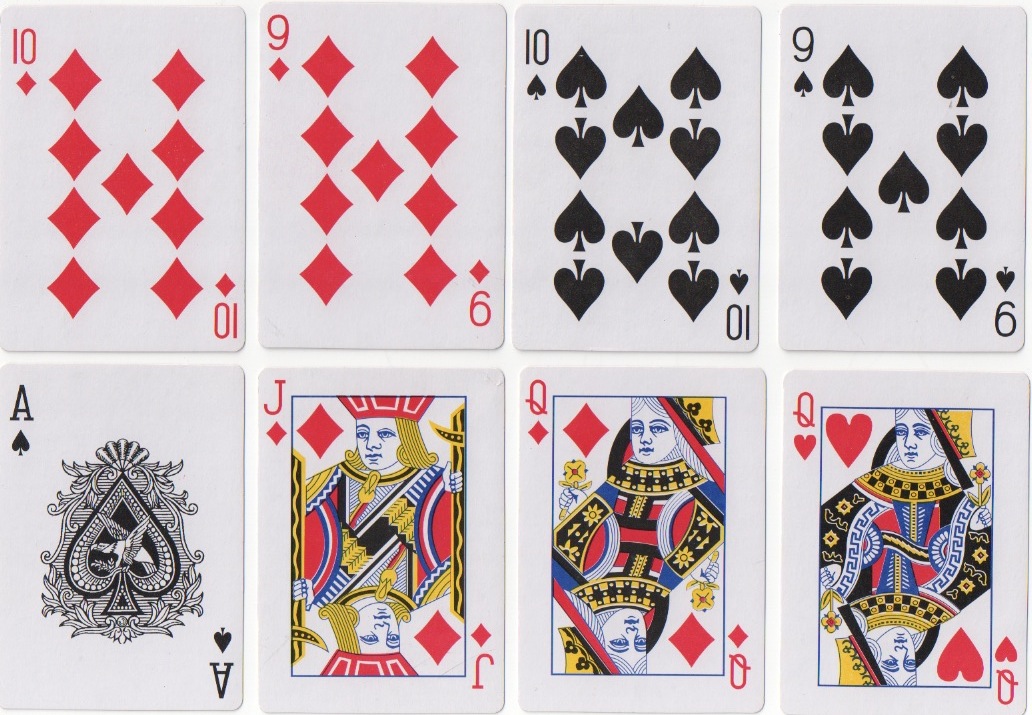 The odd arrangement on the 7H only: 2/1/2/2 can be found in a number of bridge packs and one court figure used for each suit is a common ploy for any maker who wants to cut costs. In the example below it's the heart courts being given extra duties.

The odd arrangement of nines noted above in Richard Edward packs can also be found, here with redrawn faces on the courts.