Having looked closely at the court figures of the various French regional patterns, it's worthwhile considering which patterns went further afield and ended up in different parts of Europe. We know well enough that Rouen 2 came to England and became our standard pattern, which in its turn has spread throughout the world, in particular on the back of poker, whist and bridge. I will not deal with this standard here, as it is the topic of much of this blog. I've illustrated some of the other descendants on pages 11, 16 and 25, but I want to look at further examples more closely. I will give more examples in these two pages than I dealt with in my The Playing Card article.

Lyons 1 was exported to Italy and was in use in the nineteenth century, but doesn't seem to be extant today. 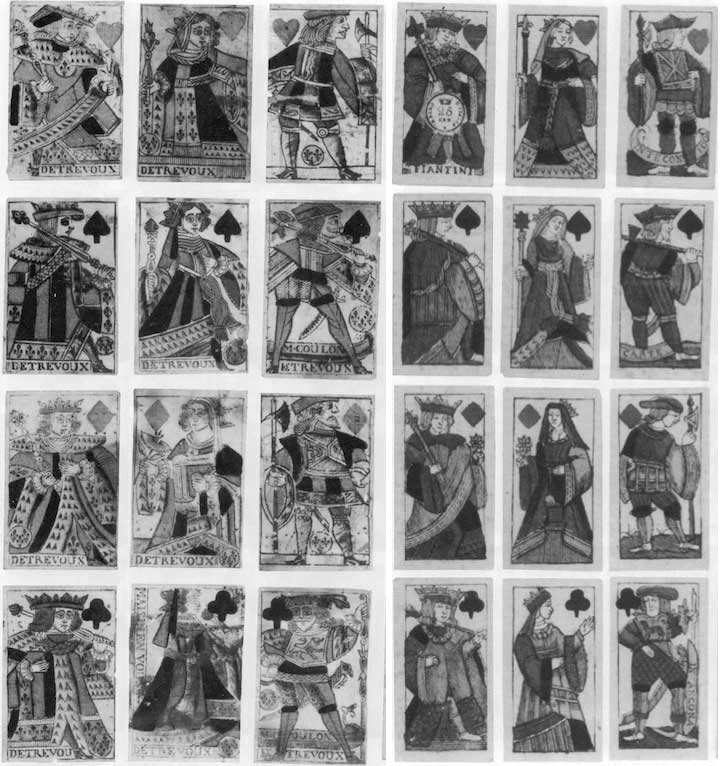 The Lyons 2 pattern ended up in Austria as the ornate Viennese patterns (A & B) with clear changes to some of the orientations and attire. There are also descendants in Switzerland. 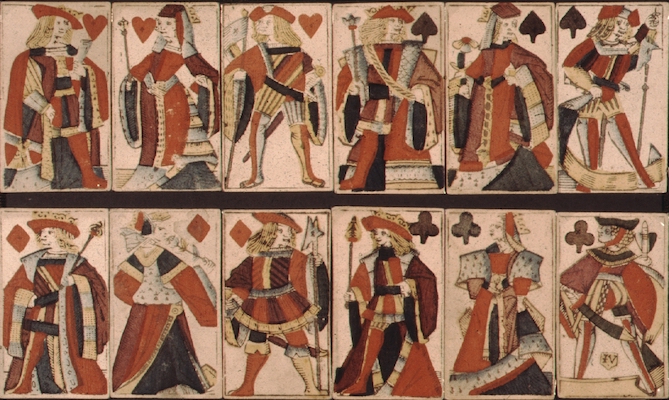 Above: Lyons 2 pattern by IV

The double-ended version was produced in large quantities in Turnhout towards the end of the nineteenth century. 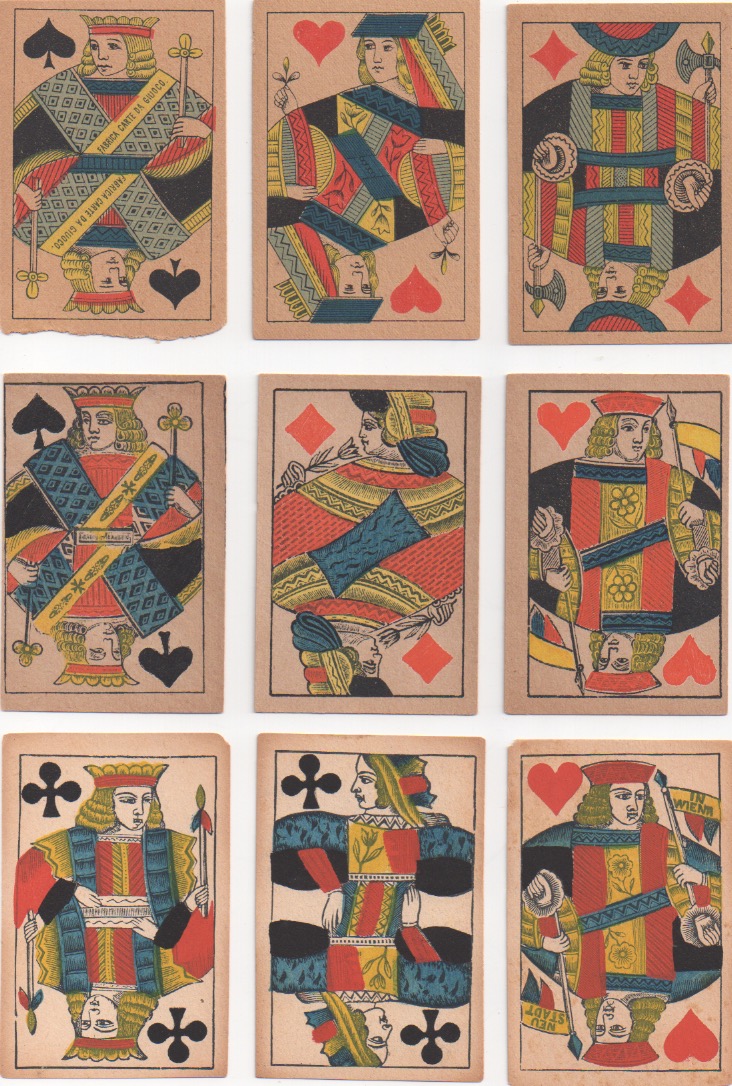 Above: three versions of the Viennese pattern from Turnhout; the top one is clearly for the Italian market, the middle one is by van Genechten, and the bottom one has "In Wien" on the JH's pennant. 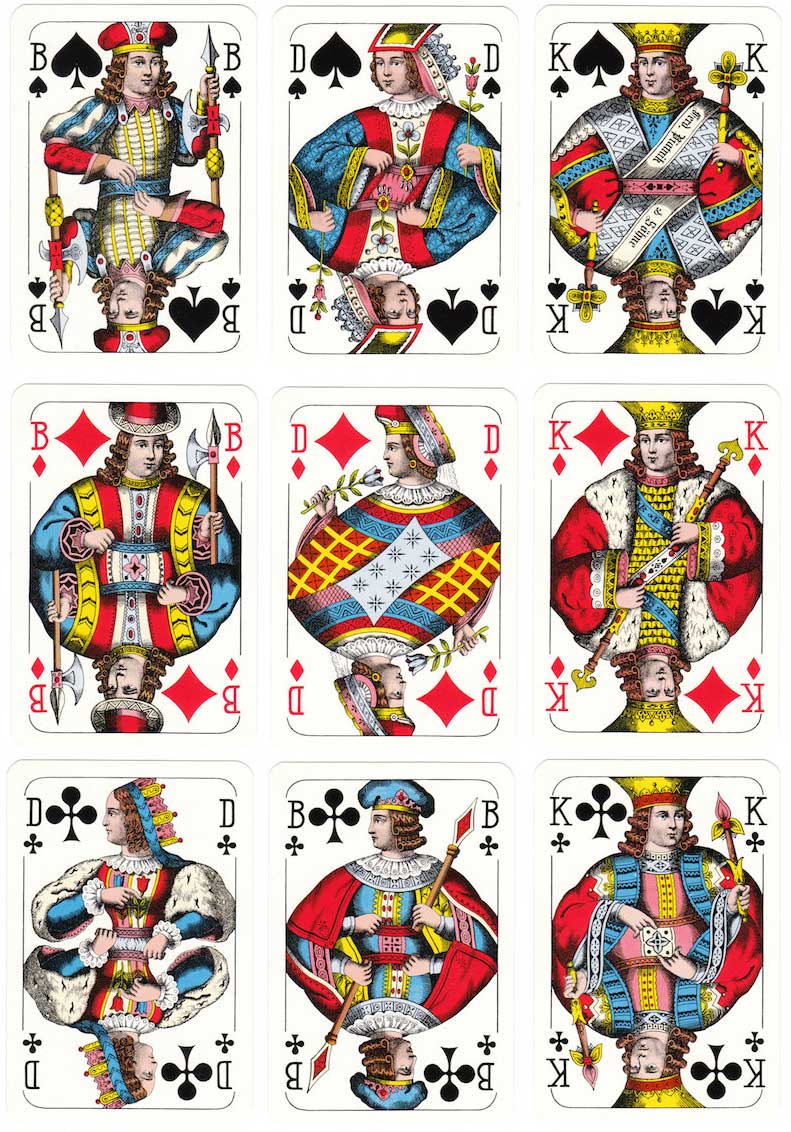 Above: Austrian A ("Large crown") all suit signs on the left 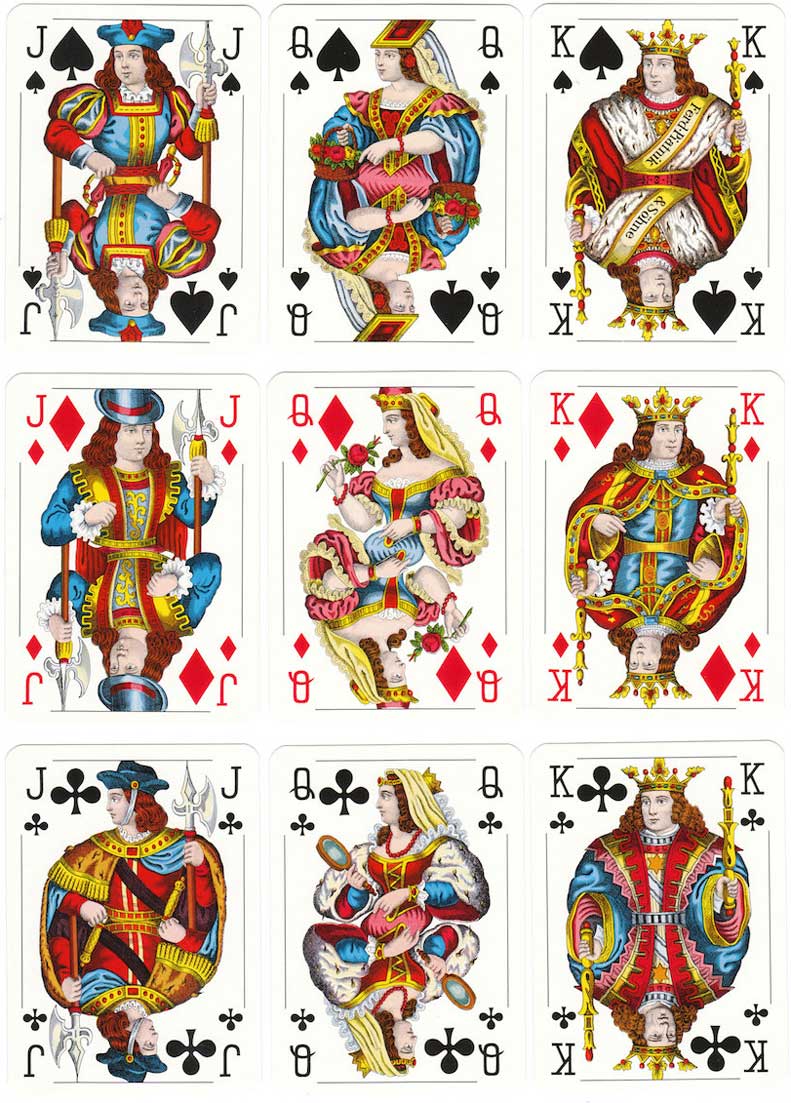 Above: Austrian B with some alteration to the direction of the heads and attributes: all suit signs to the left. 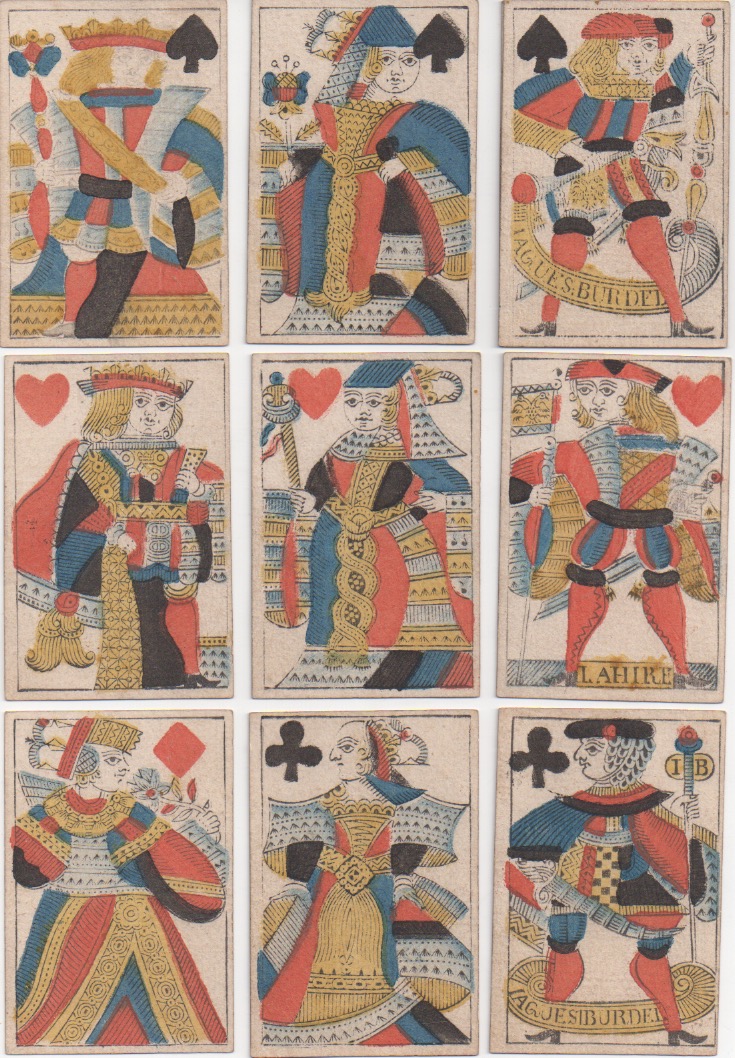 Above: a Swiss version by Jaques Burdel, keeping the original postures, c.1800 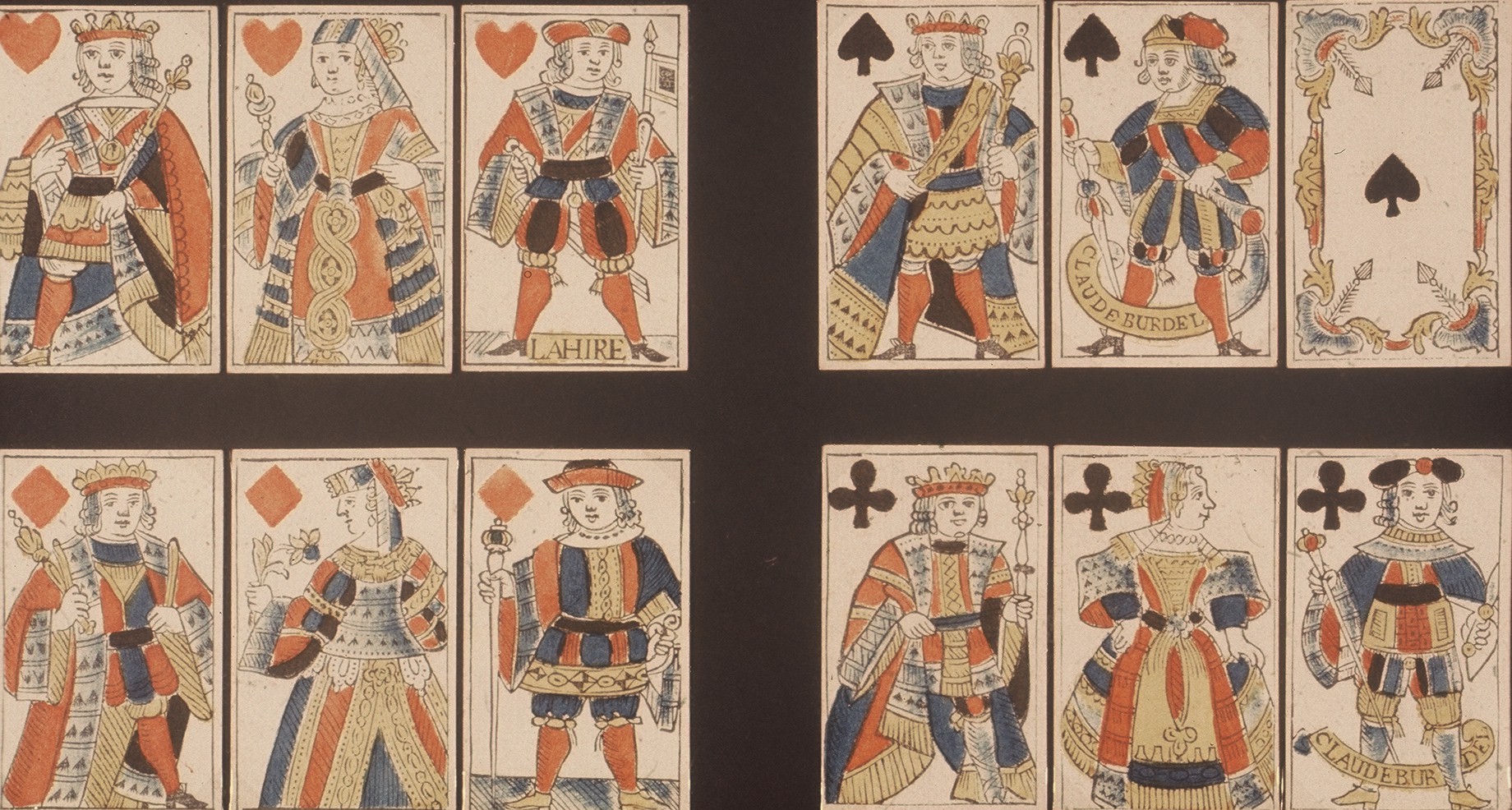 Above: Swiss version of the Lyons 2 pattern by Claude Burdel with all suit signs on the left and several courts turned. A very much simplified treatment with a completely altered JC. 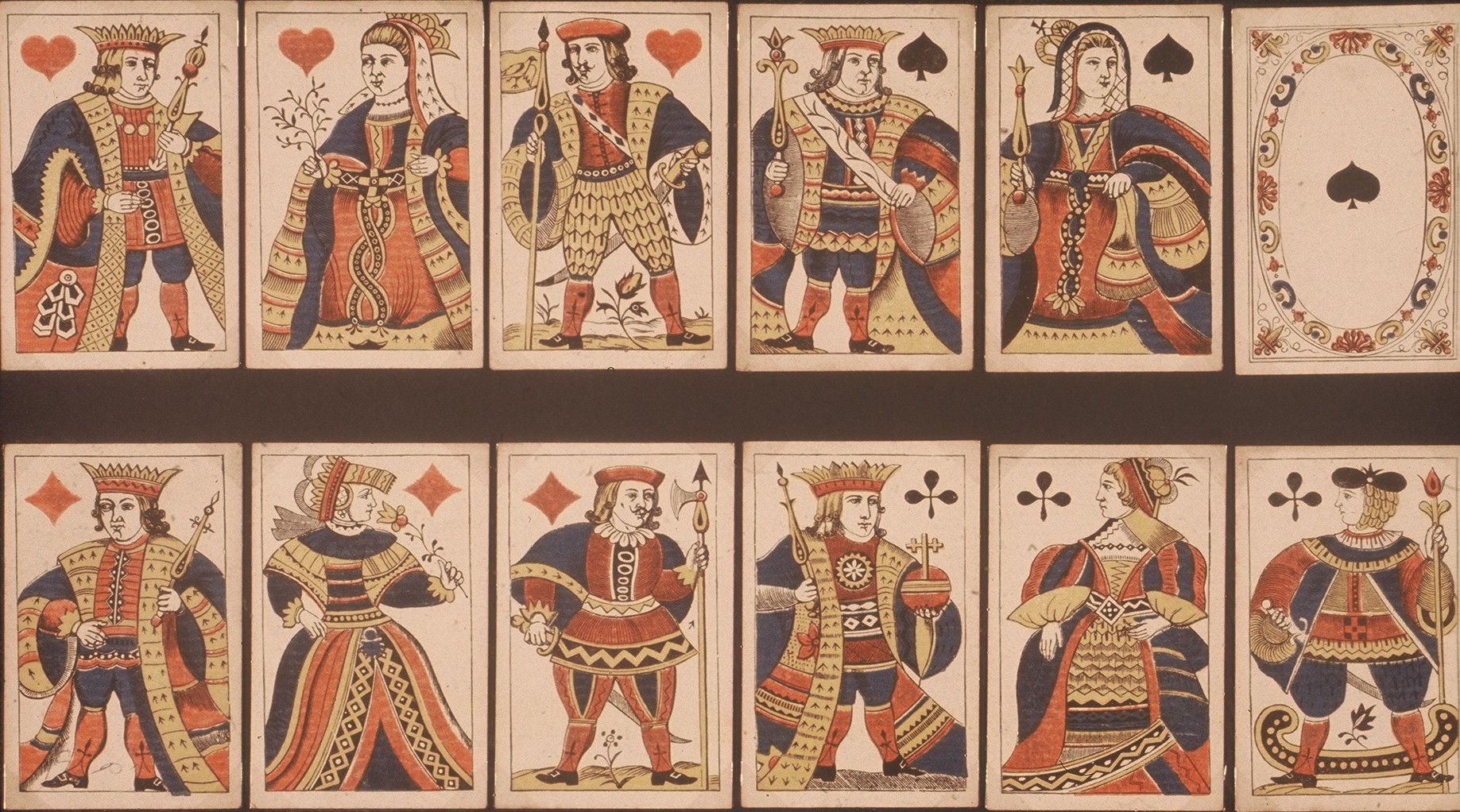 Above: a more sophisticated Swiss version with the original orientations, except that the KC has been completely altered; he is now like the Dauphiné KC with a sceptre rather than a sword.

The first Rouen pattern remained single-figure into the 20th century in the guise of the Liège pattern. 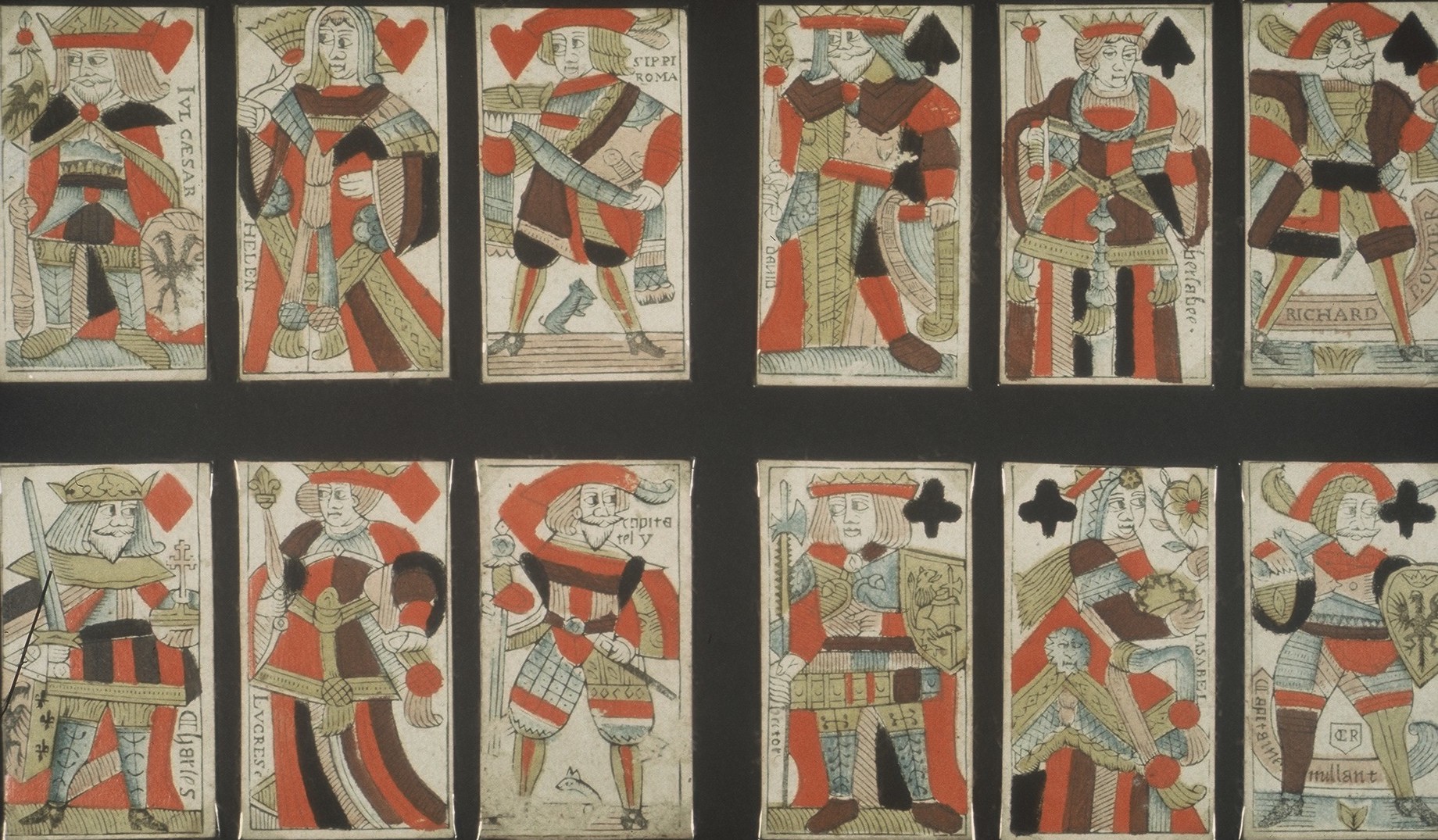 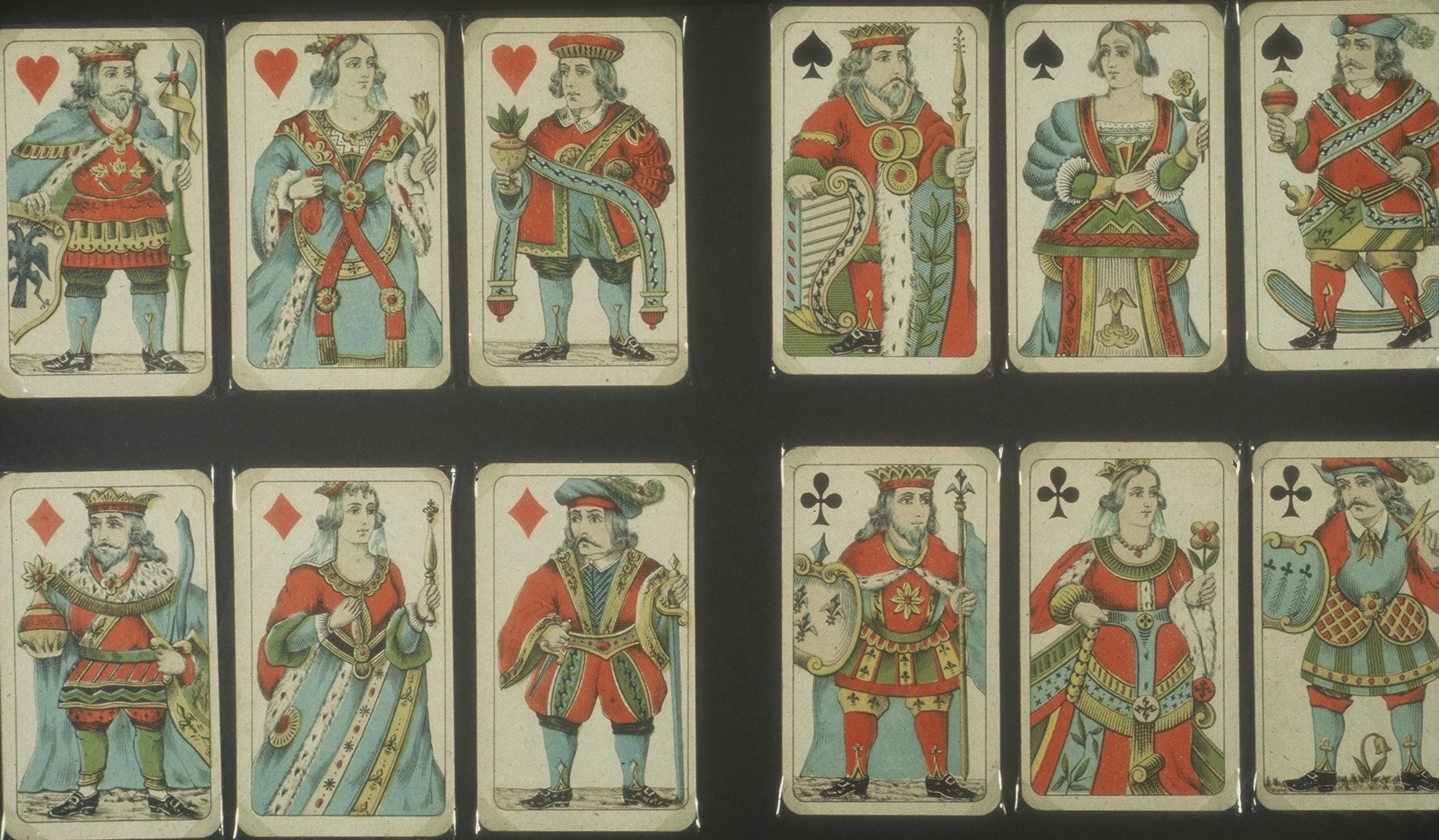 Above: Liège pattern by Brepols, c.1900, all suit signs on the left.

There are numerous descendants of Paris 1. Here is an early version by Jean Gisaine of Dinant from c.1750. The pattern is unchanged from the French original. 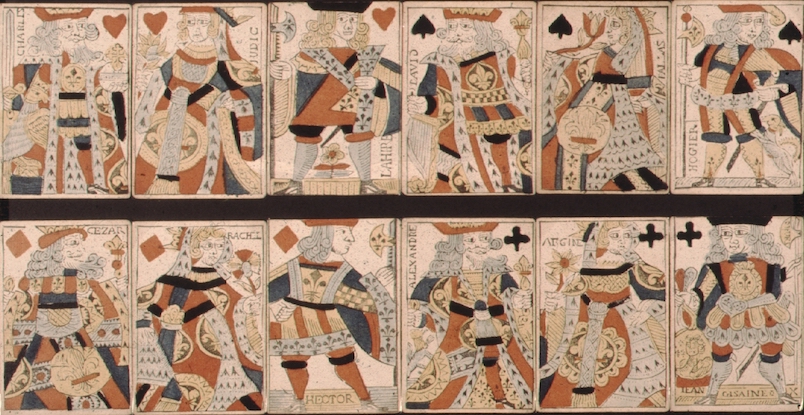 By 1880 Belgian versions were double-ended with all pips on the left. Some alteration of the postures has occurred and in the case of the JS and JH their attributes have changed hands. 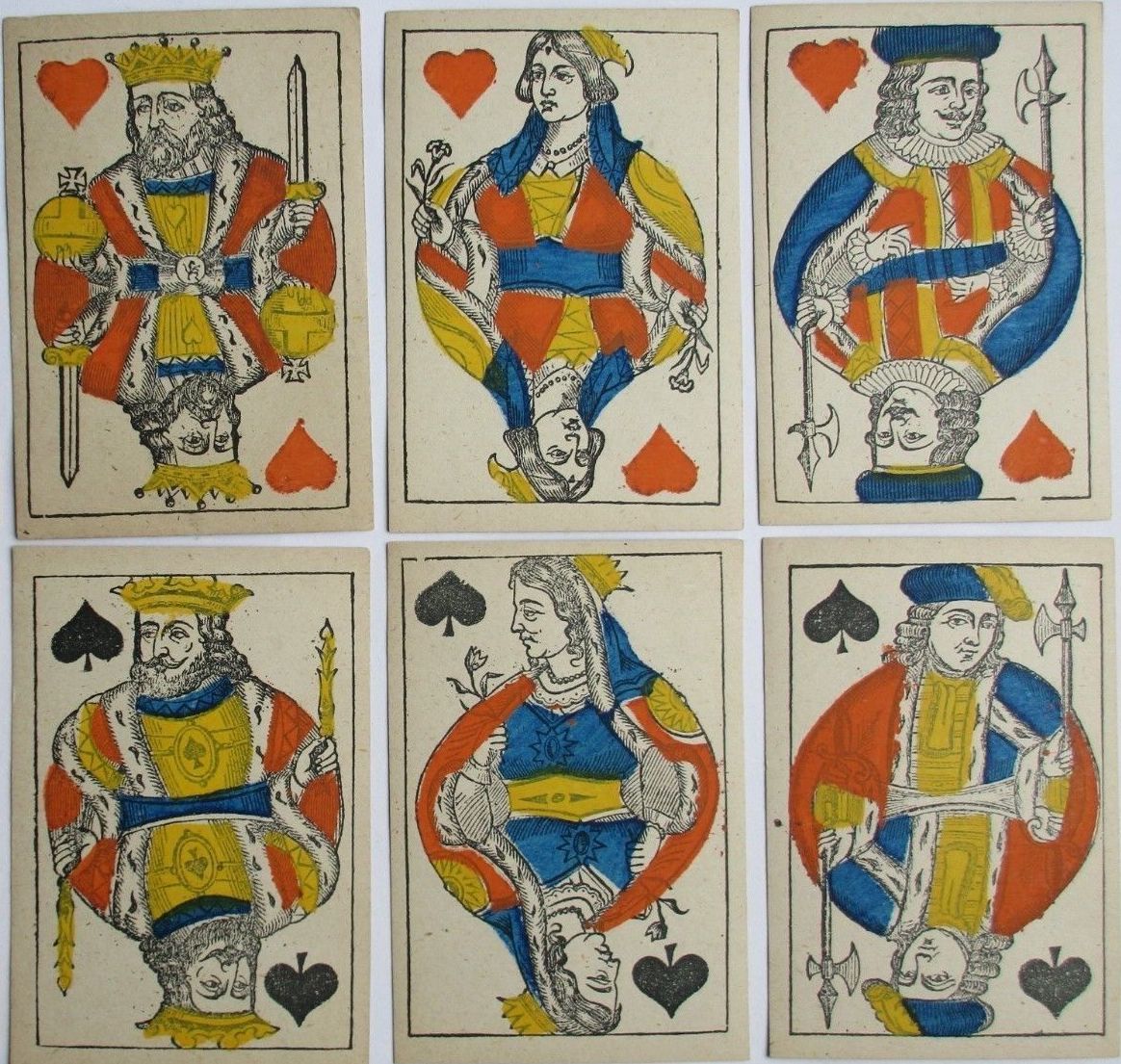 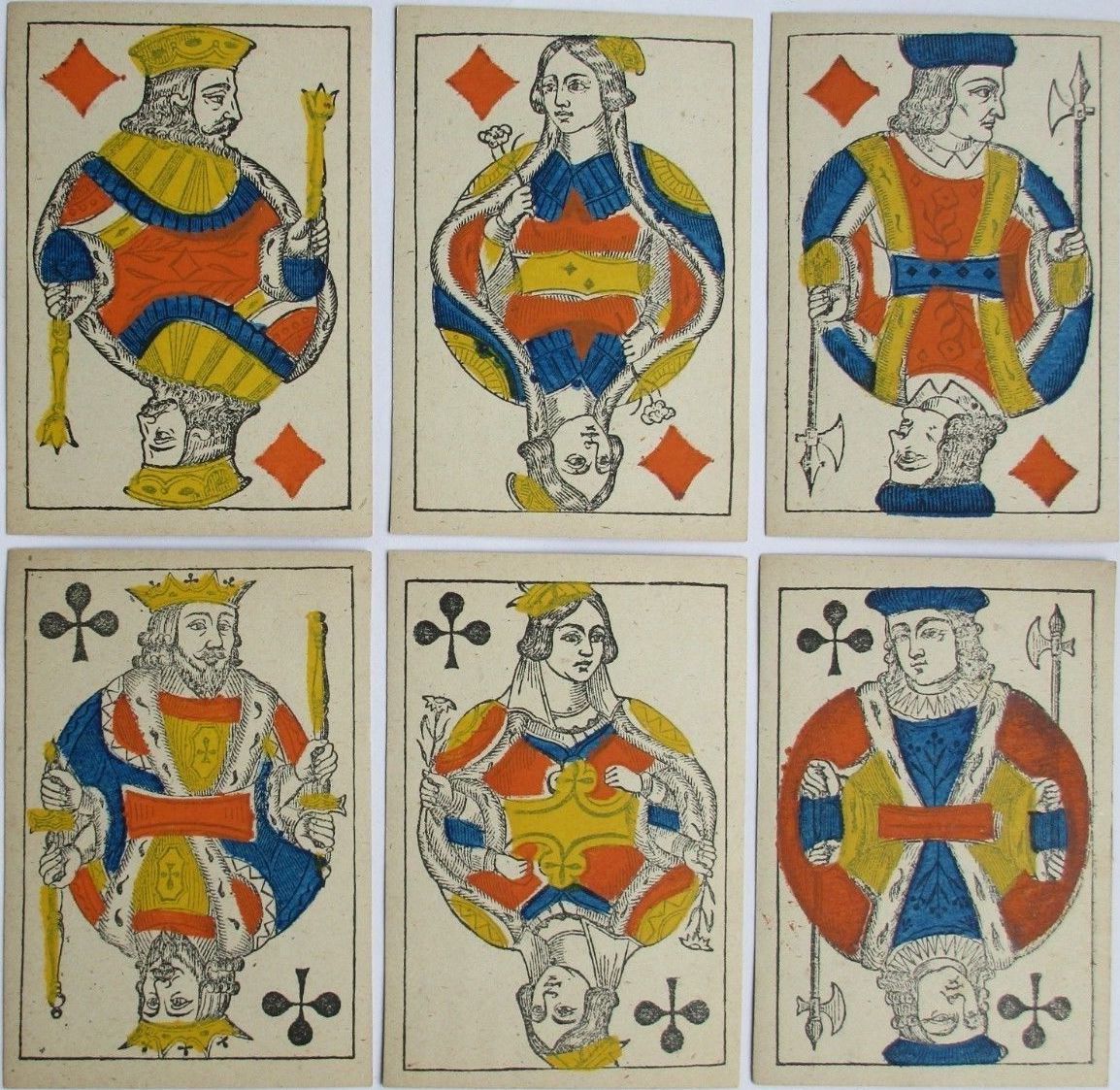 Müller also produced a single-figure version in the second half of the 19th century. 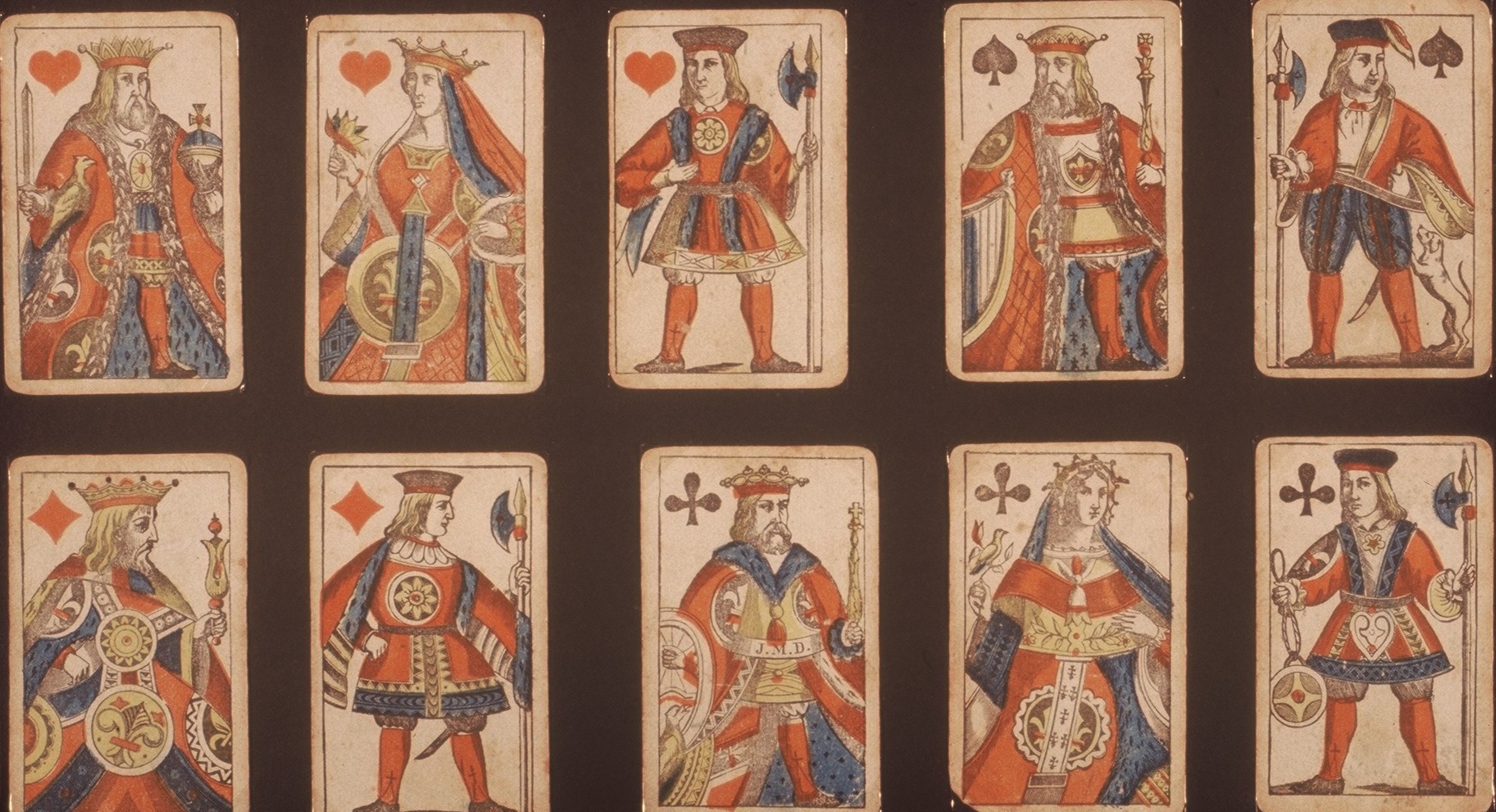 Above: Paris 1 by Müller: the JH is from Paris 2; although most pips are on the left, the JS has his on the right.

One group could be suitably referred to as the North European version. It spread with various alterations to Belgium, Holland, North Germany and Scandinavia. The Scandinavian group developed its own characteristics and altered the orientation of the figures for no apparent reason. 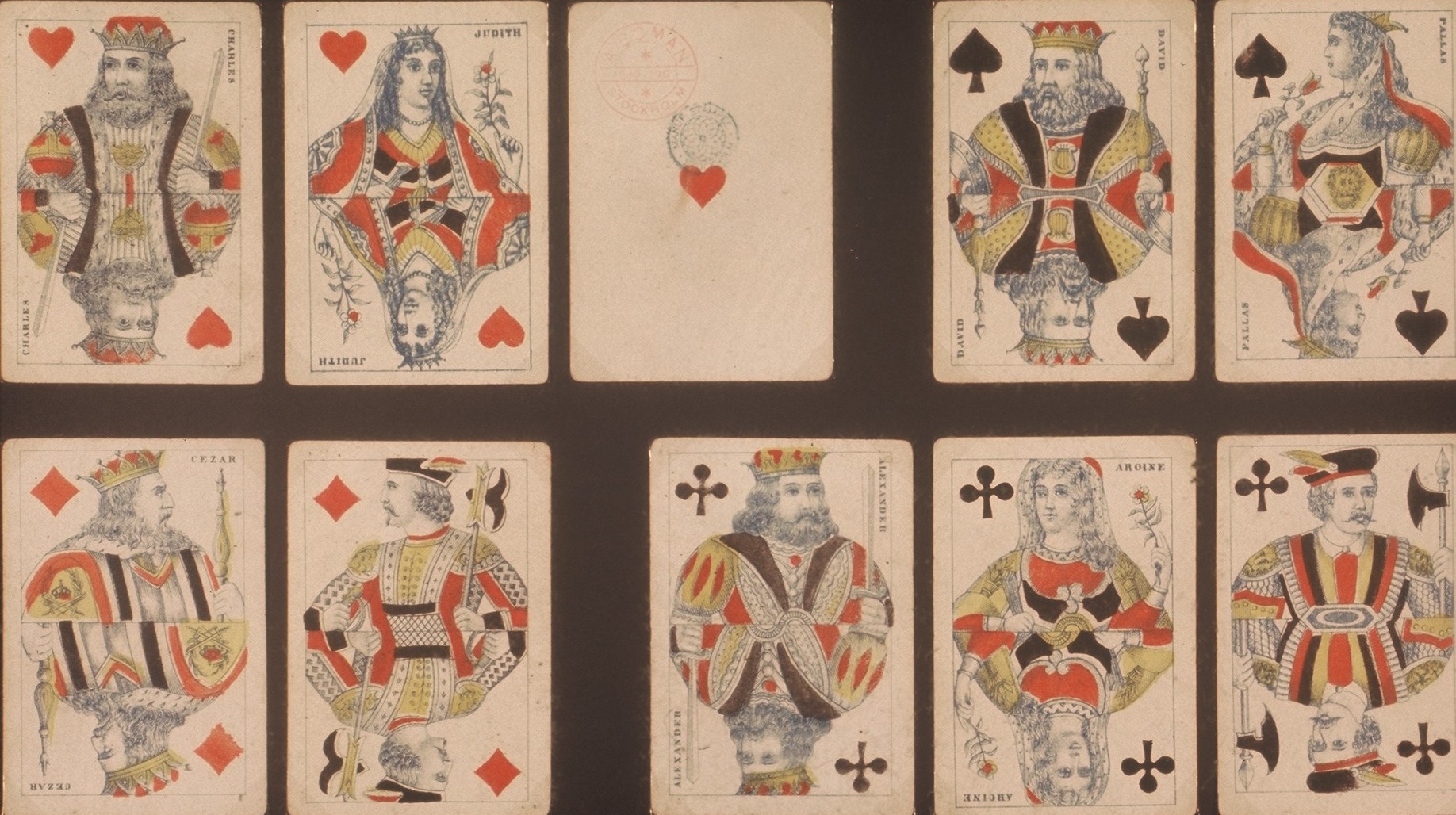 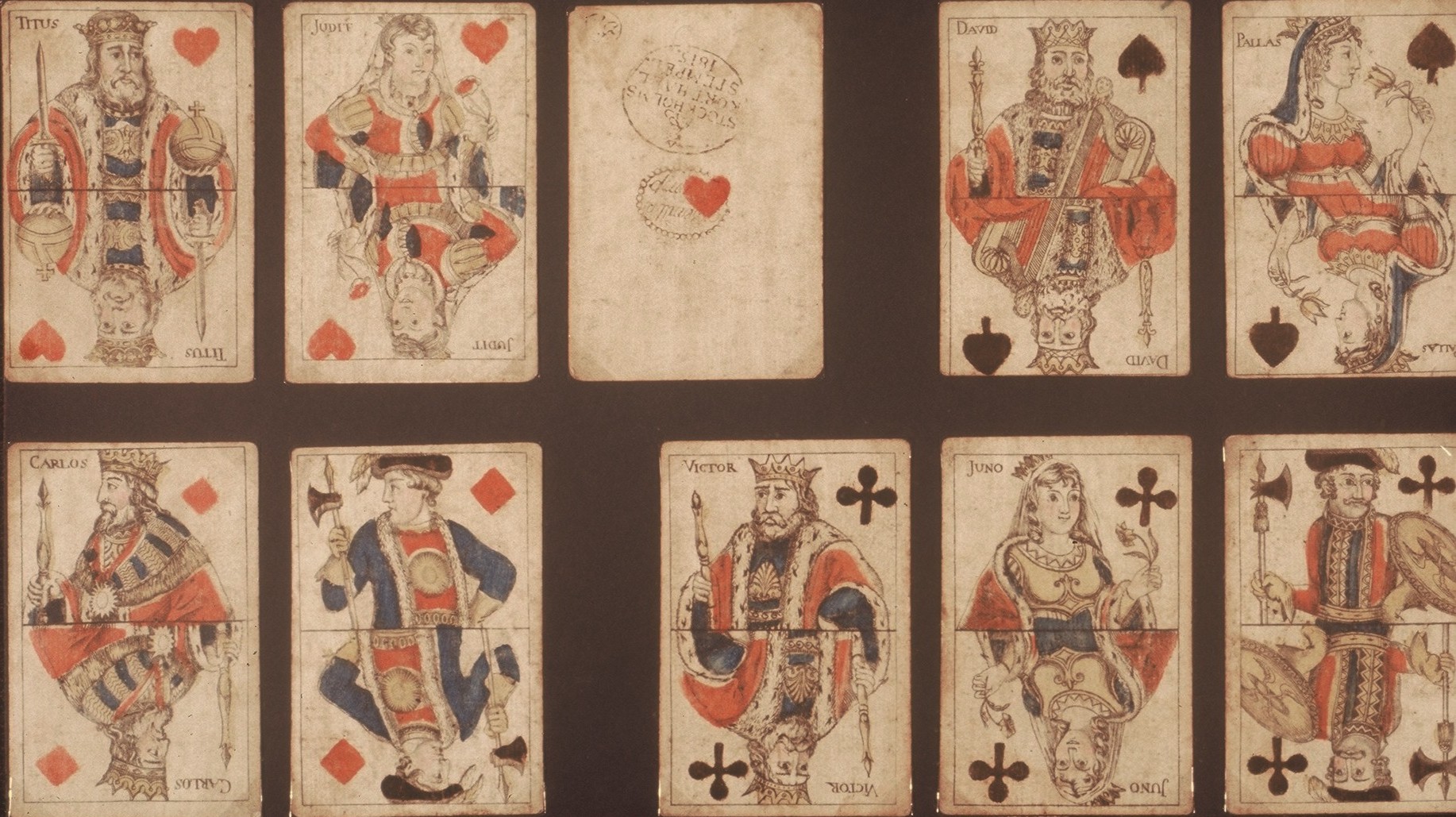 Above: Stockholm, 1815. In this version all the courts have been turned with pips on the right and there are altered names on the kings and queens. 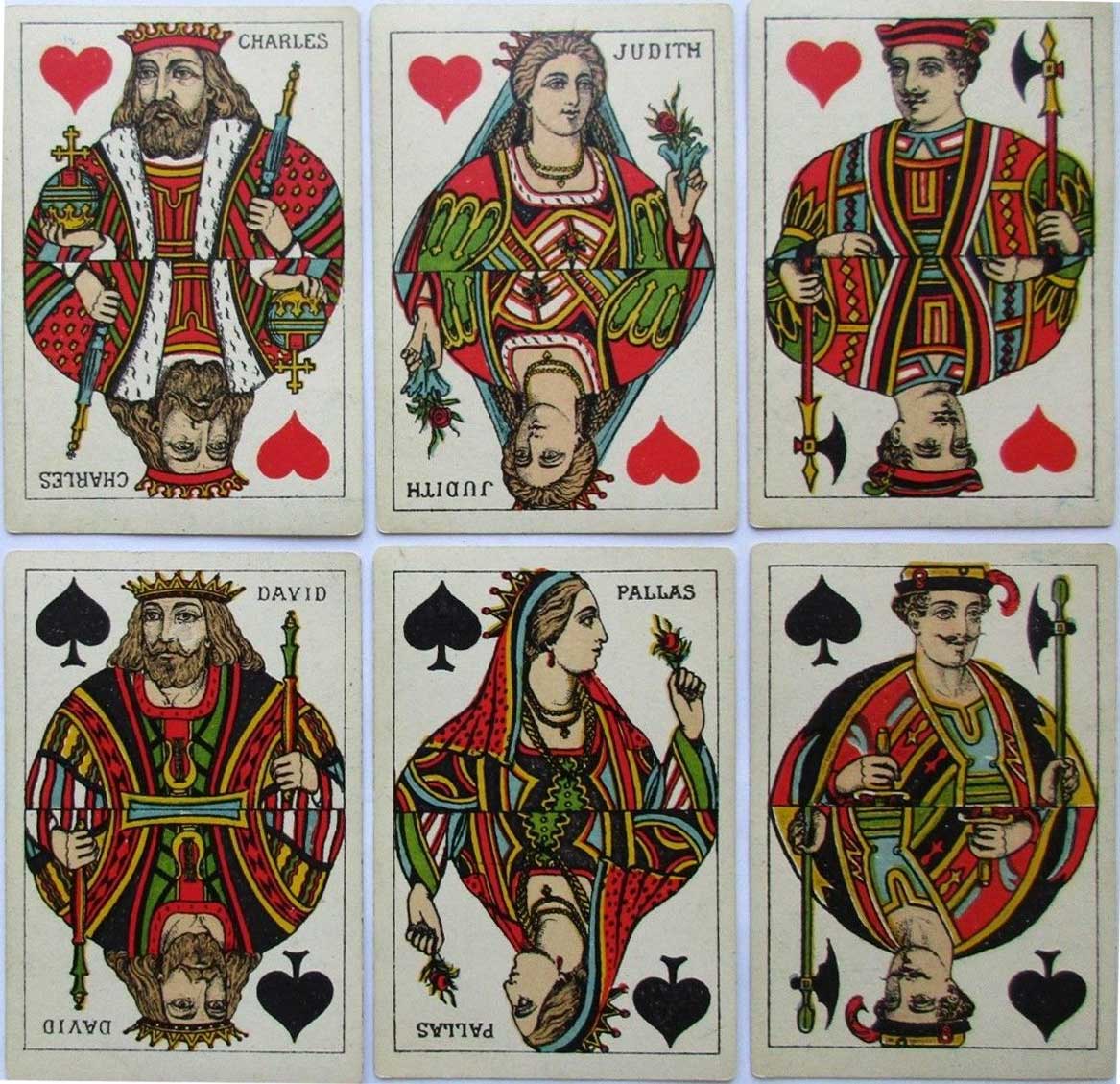 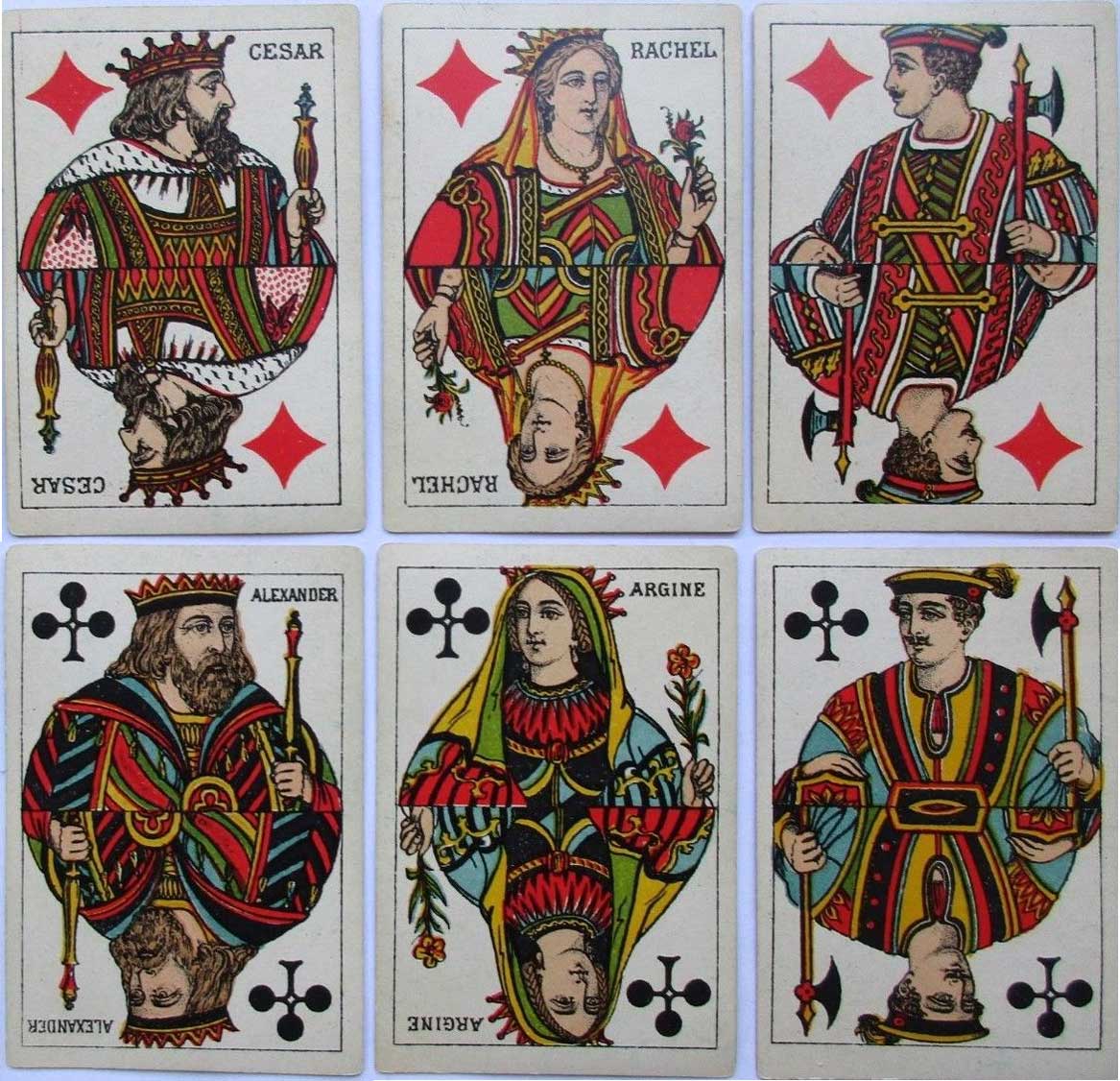 Above: a finely engraved version by Litografiska Norrkoping, c.1890

A subgroup of this version was influenced by Runge, who introduced his own reworking of the Paris pattern in 1809 and 1810. The earlier version was much less like its model, but the second version had features which can be found in a number of North German pack in the 19th century. 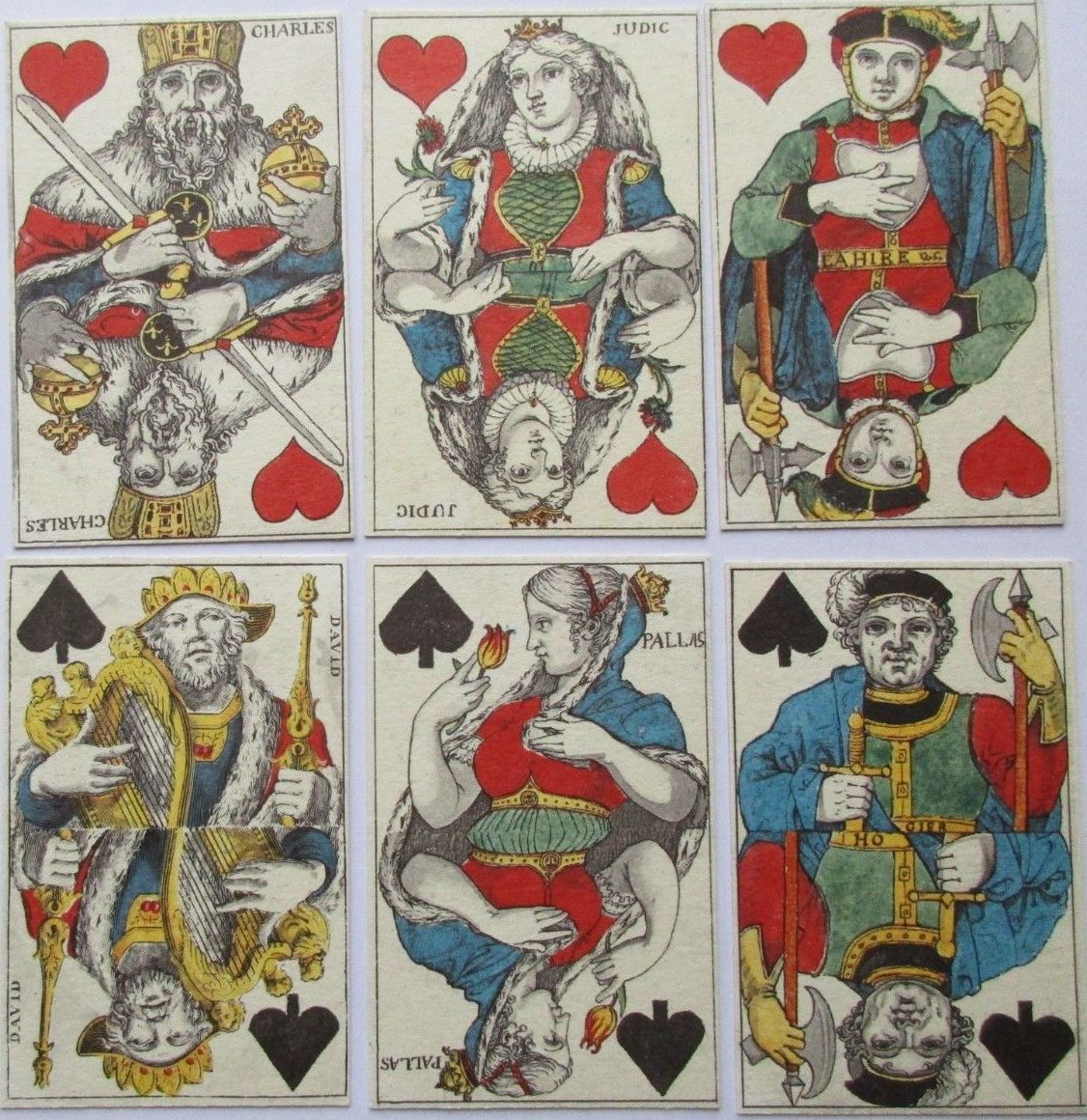 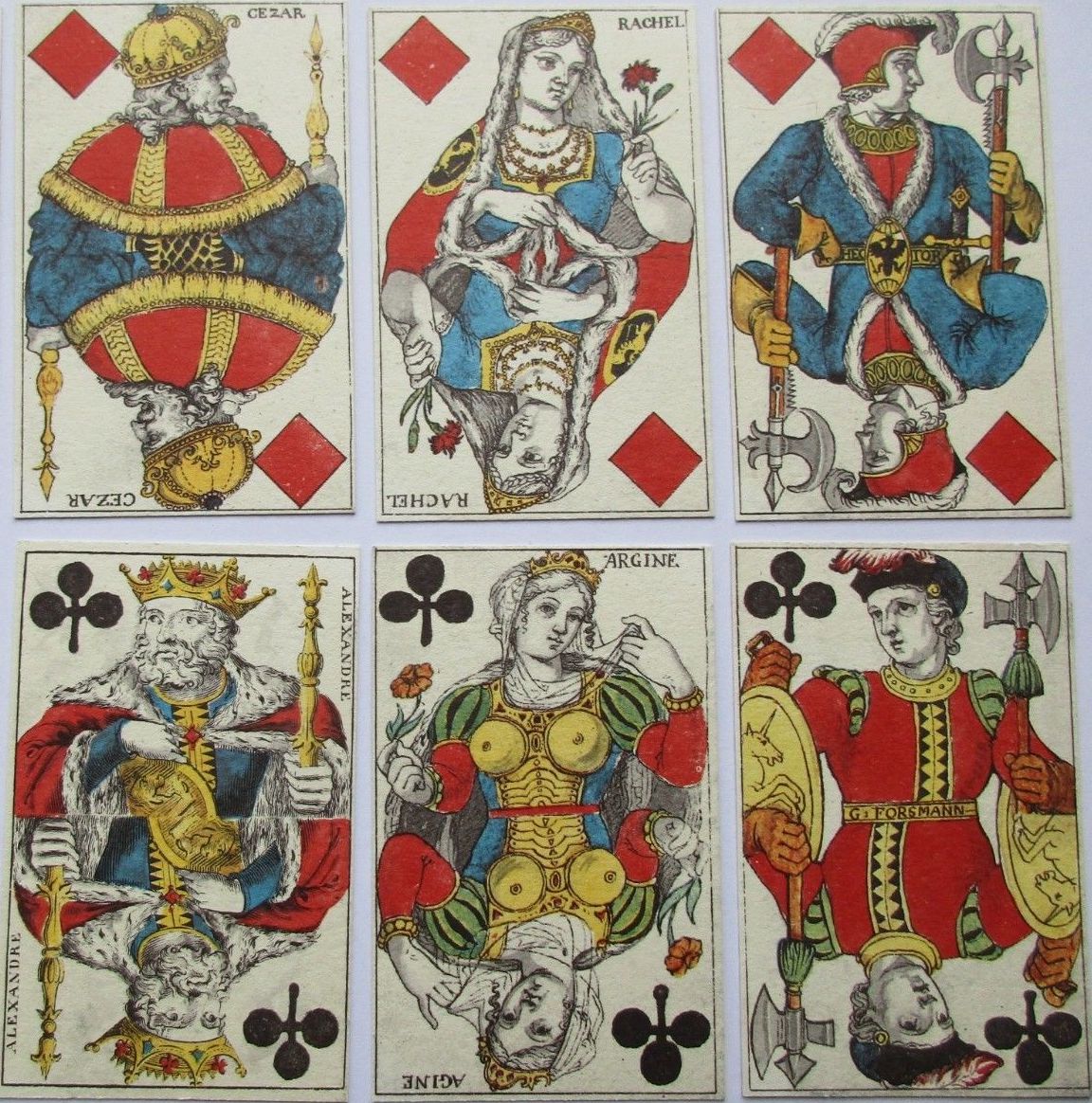 Above: Reproduction of Runge's 1810 designs. Notice in particular the front-facing JH and JS.

These designs were the basis of a version often referred to as the Hamburg pattern, as the makers were based in that city. 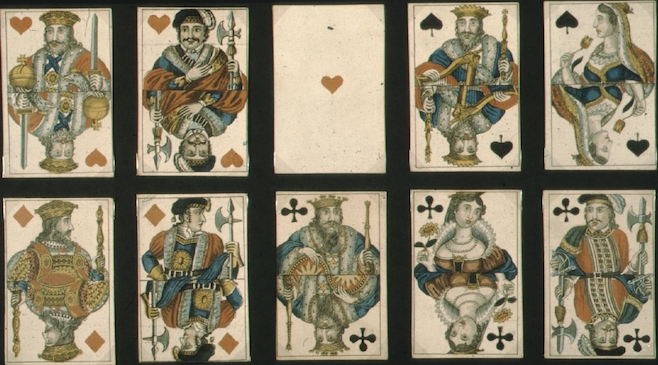 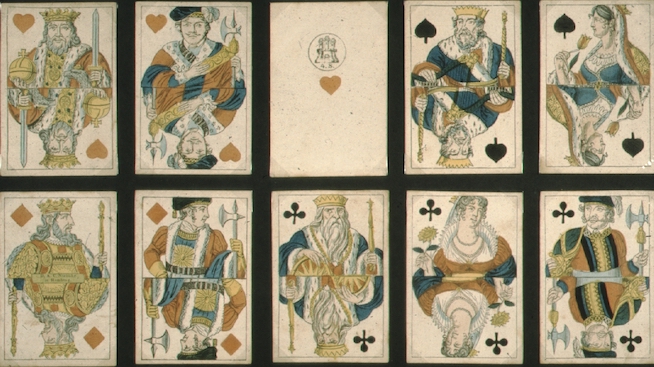 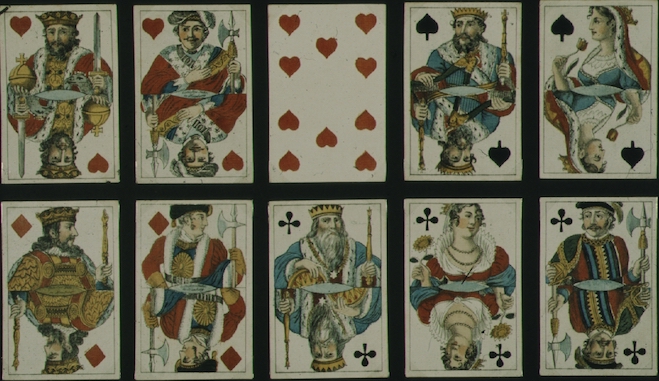 The standard German "französisches Bild" took a somewhat different route, but retained some of the Runge features, e.g. the raised harp of the KS. 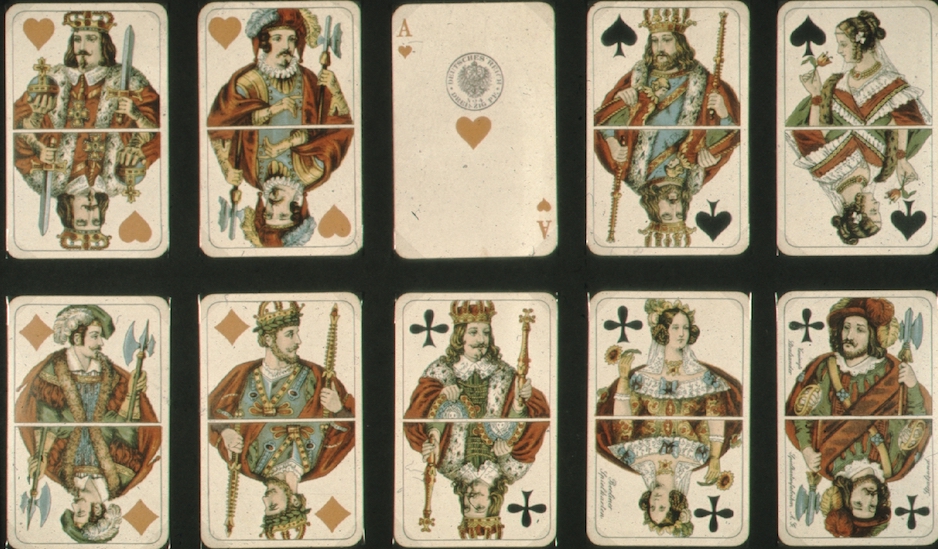 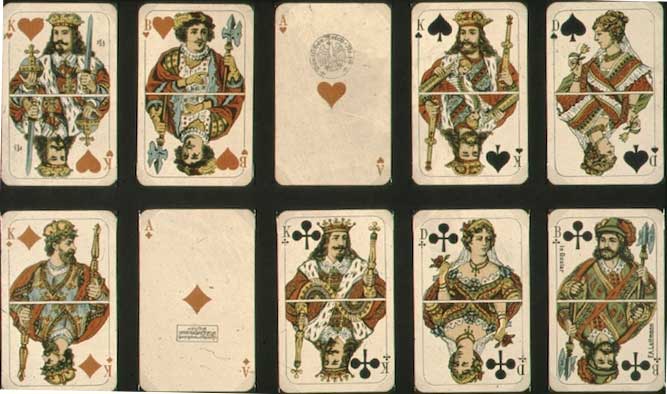 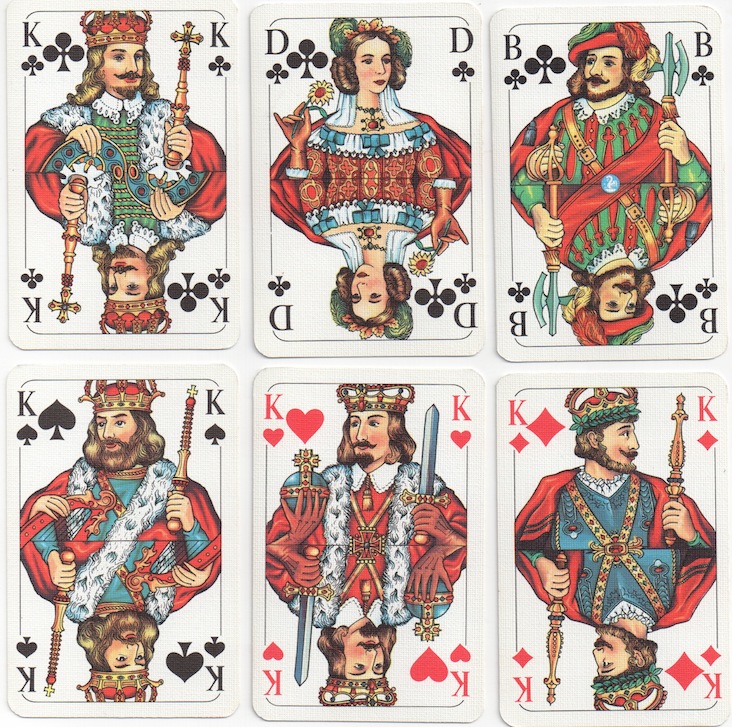 Above: Modern version by Pelikan.

For some modern variants of the Berlin pattern, see page 28►