Since there is such a lot of material on cards in the archives I'm using, I'm starting another page of material produced after the change in the taxation system. A lot of changes in design were made during this period, in particular from 1865 to 1885, and many of them are advertised and reviewed in the relevant press.

This is the year of an international exhibition held in the wake of the success of the Great Exhibition of 1851. There is a brief report on the medal winners in the fancy goods category. 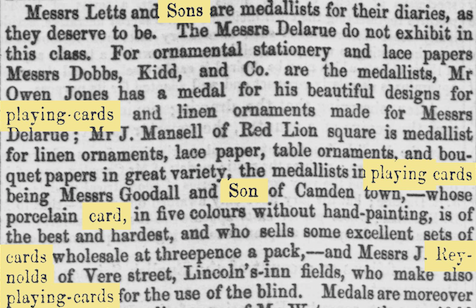 In the same year it appears that Bancks Brothers published the first edition of Cavendish on Whist, taken over later by De La Rue. The fifth edition by Bancks appeared in 1863.

A review of Cavendish on Whist with an interesting reference to McEvoy (misspelled in the text) and Edward Hall, the Bancks Brothers' grandfather and a comparison of cards from the 1760s with those of the 1860s. 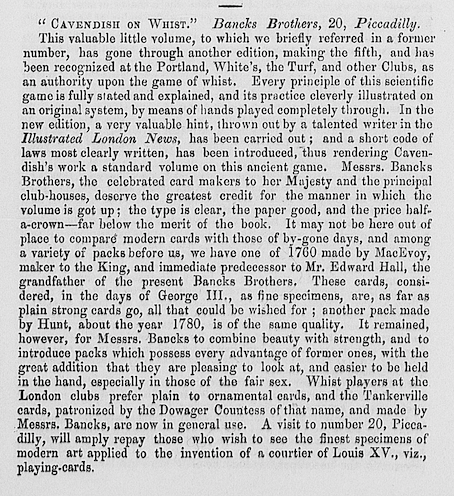 There is also a discussion of the end of the one shilling duty and two of the new aces of spades produced by individual makers. Note the side-swipe at Owen Jones's effort for De La Rue! 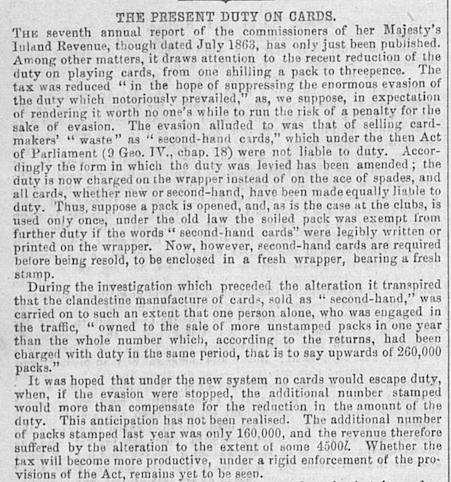 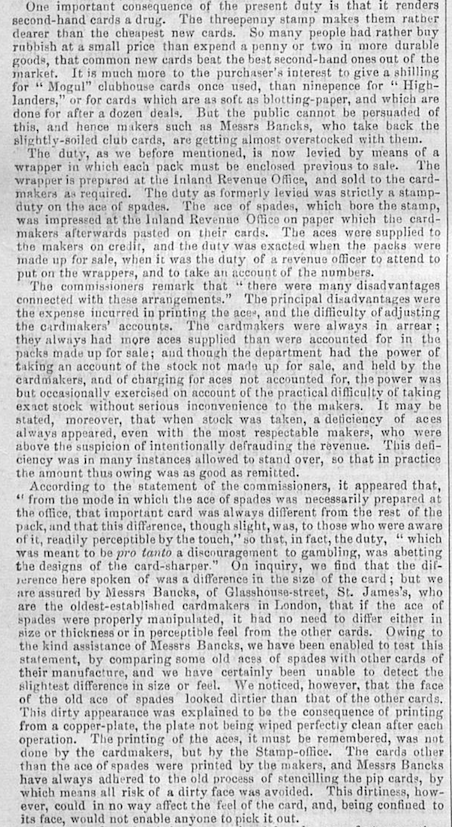 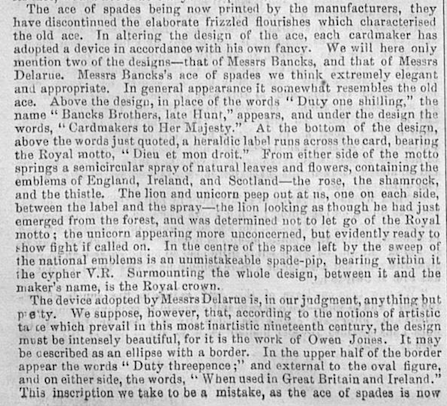 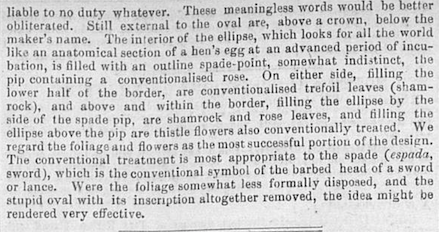 In this year, too, a non-standard pack by a French artist is advertised and Mudie is advertising his secondhand packs, in particular those of Bancks and De La Rue. 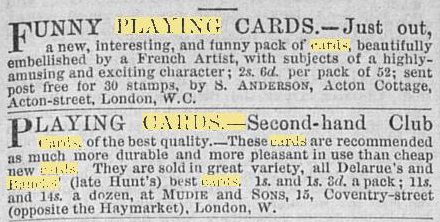 The 1870s saw some rapid changes: at the beginning of the decade cards had square corners, mostly unturned courts, no indices and were thick. By the end of the decade cards comparable to those of the present-day and certainly to those of contemporary American manufacturers such as Andrew Dougherty had been introduced, even though the old types were still available.

The artistic efforts of Goodall were reviewed in an article dealing with "Art at the Card Table". Notice the other goods that are mentioned. Notice, too, that the emphasis is entirely on the back designs. 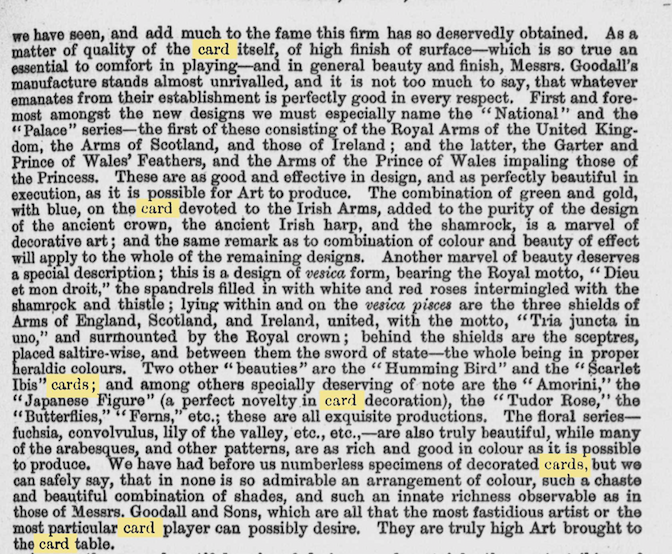 James English adverts are not very common, but here's one from the same review.

In The Athenaeum there is an advert for De La Rue's International pack, which I assume is the one with international royalty on the courts, as illustrated below.

In the same issue there are also adverts for various goods by Goodall including the game of Quaterne. 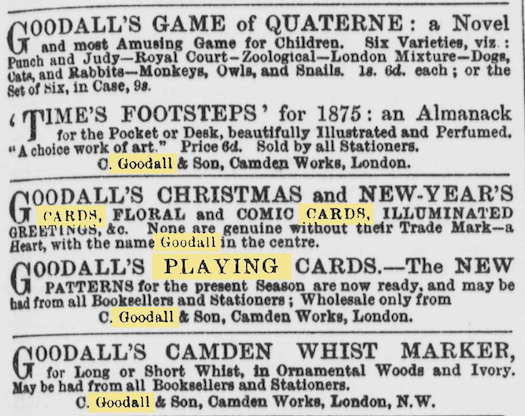 By 1877 changes such as round corners and indices are getting quite common. "Duplex" cards by Goodall are those that are double-ended. 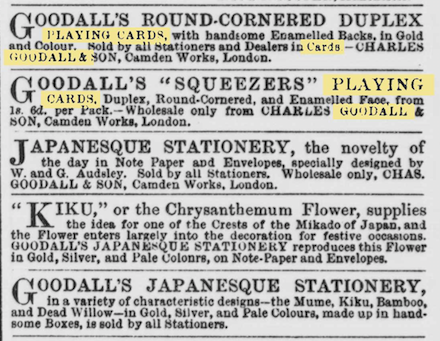 Two reviews of Hunt's cards from the same year contain interesting information about the firm and their products. 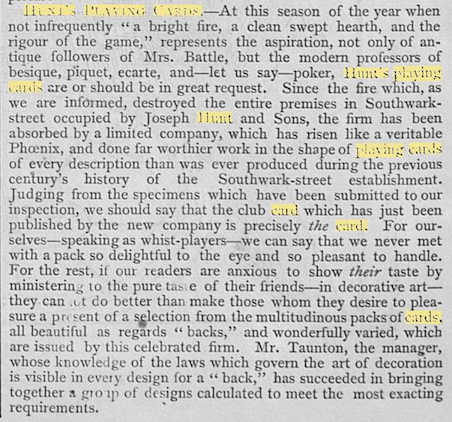 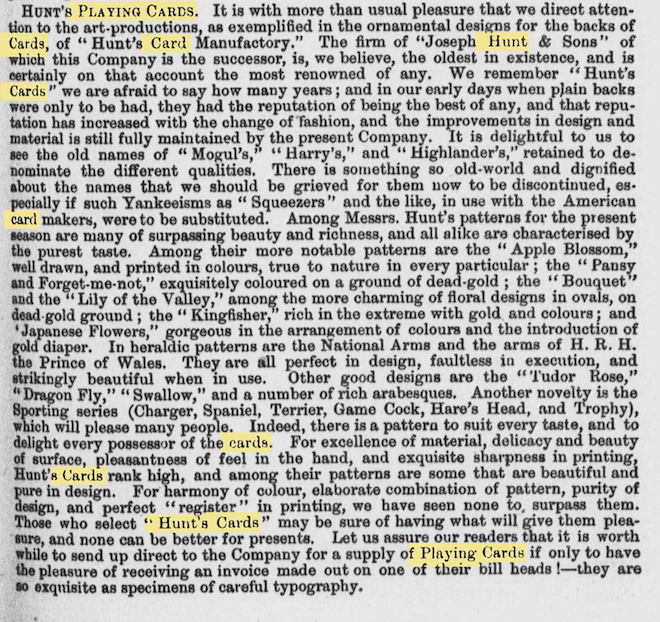 In the same periodical there are reviews of Goodall's cards and some of those imported from America. Clear signs of what's to come! 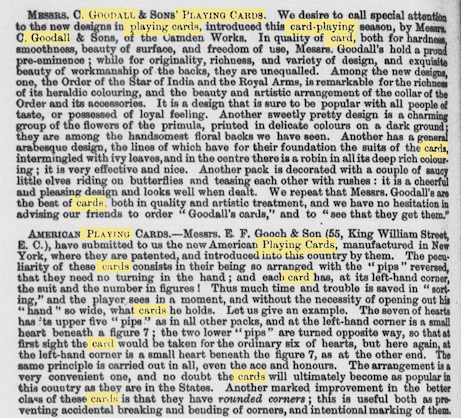 A review of Goodall's cards including specific reference to their triplicate indices plus a review of Woolley's cards. 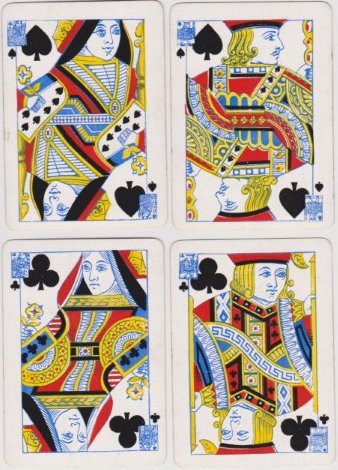 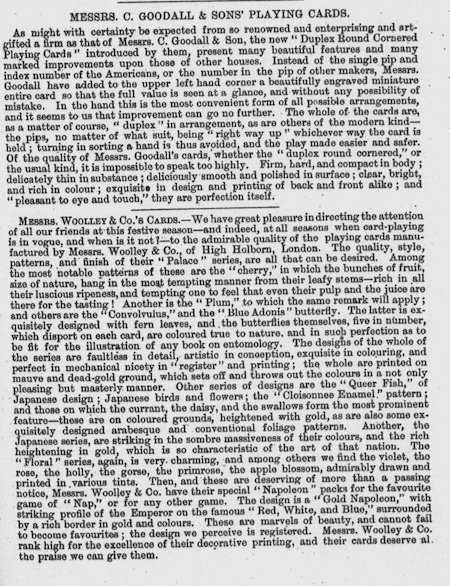 An advert for Hunt's smaller, round-cornered cards with decorative back designs. 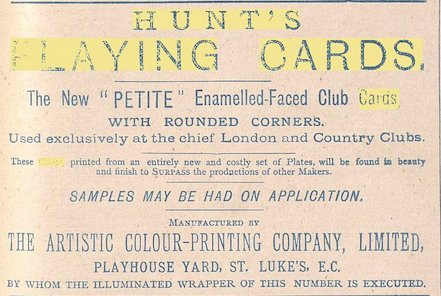 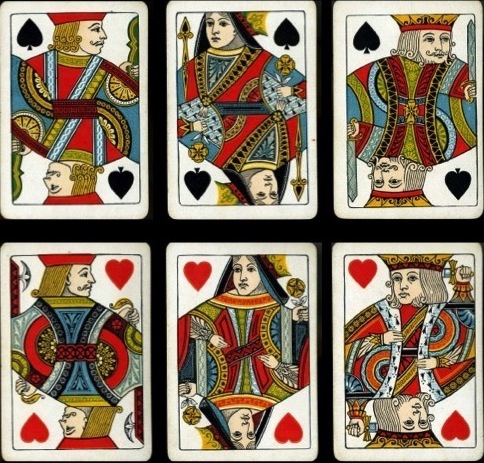 There are several reviews of different makers' cards, of which I have chosen a couple. Despite the praise heaped on Hunt's cards the firm was nearly at the end of its life: the last cards with Hunt's name on were made by C.T. Jefferies of Bristol in 1883 and these were printed in red and black only. Notice that Woolley's Eureka indexed cards are referred to this year. 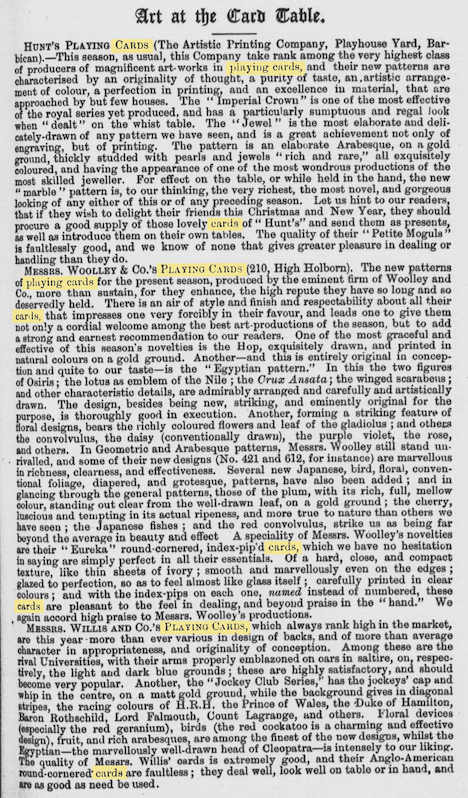 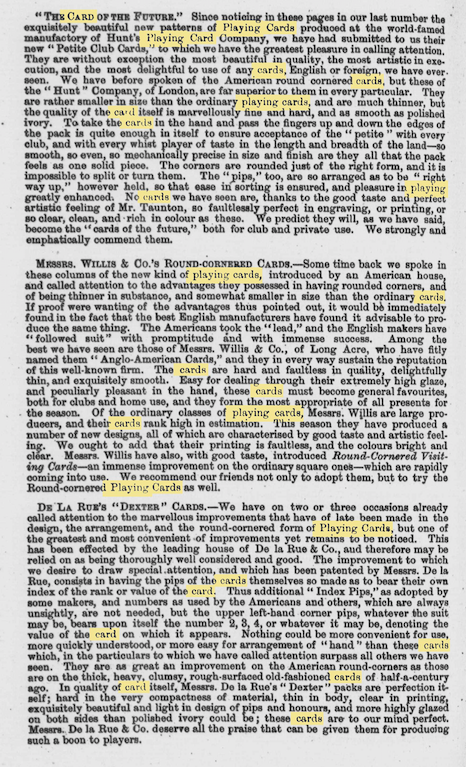 More reviews of Willis, Hunt and Woolley. Note that Hunt goes by the name of The Artistic Stationery Company and is based in Leeds. 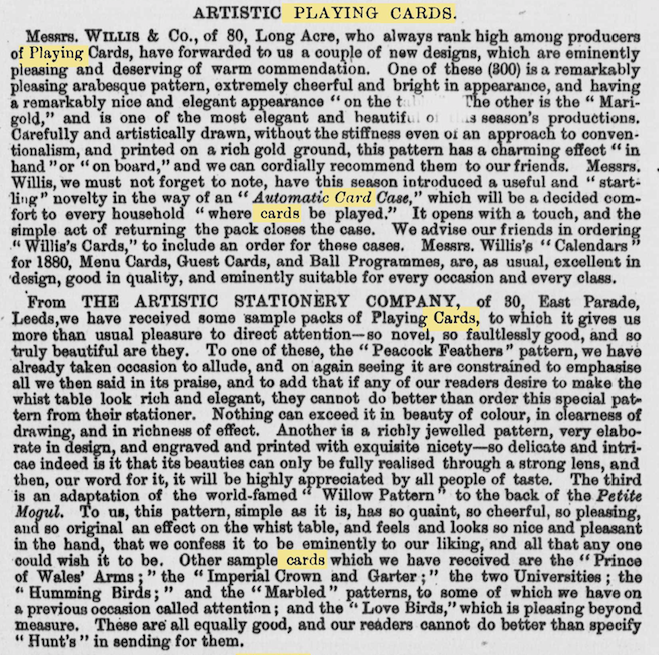 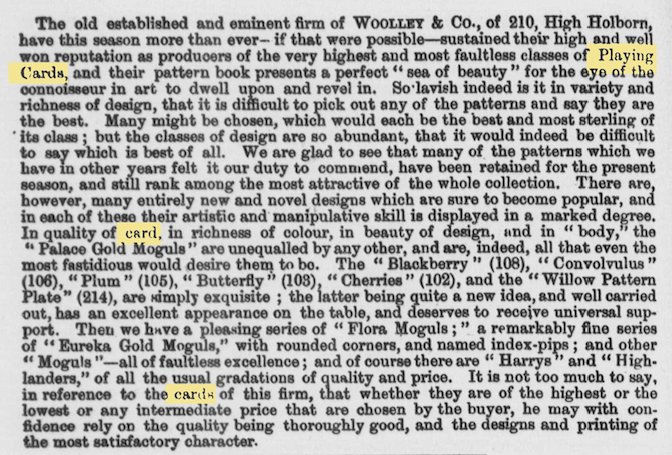 A rare advert for Willis's Deakins Political Pack. This is for the third edition. 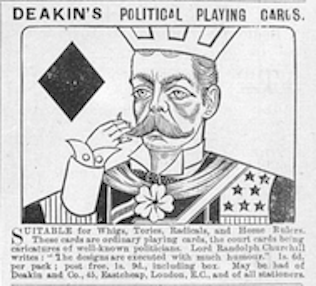 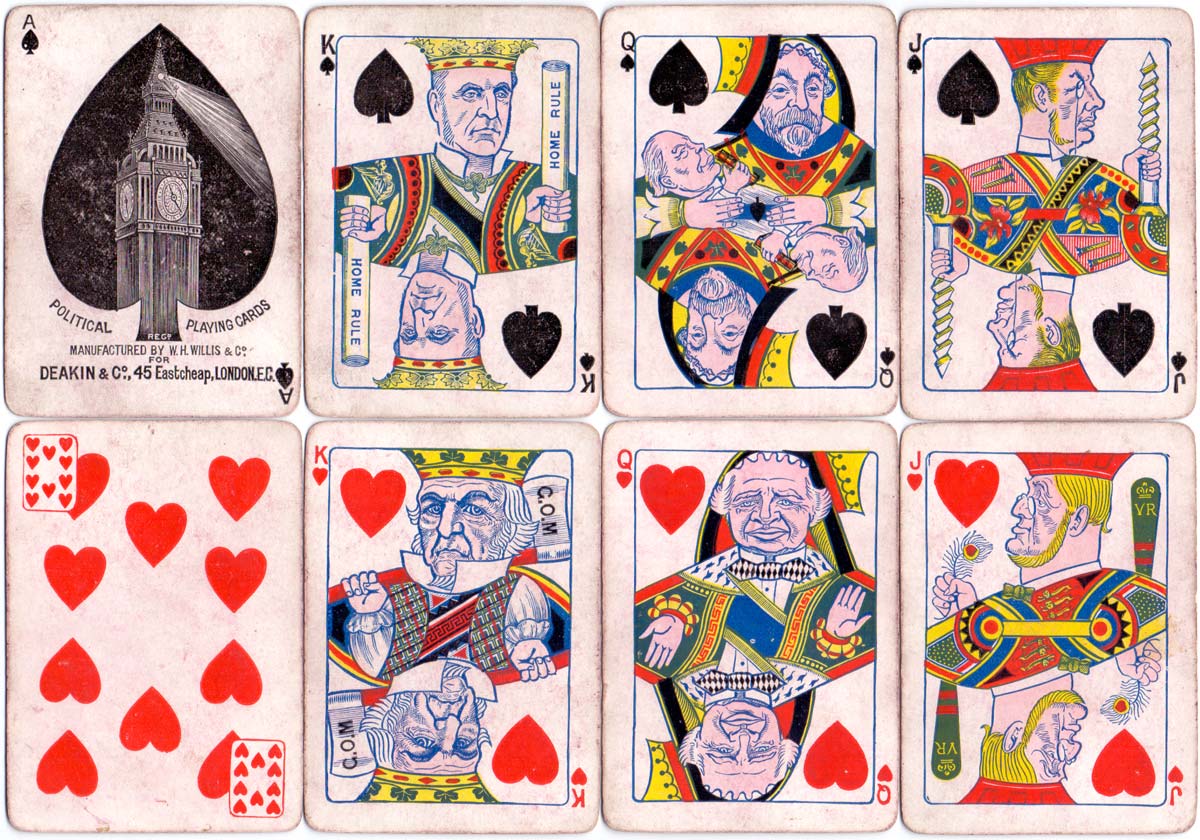 An early advert for De La Rue's Pneumatic cards with a herringbone finish. Such finishes were available from Reynolds some forty or more years earlier.

A review of the backs for the non-standard pack with mediaeval courts designed by Aymer Vallance and produced by James English (Peerless) in that year included black and white illustrations of them. 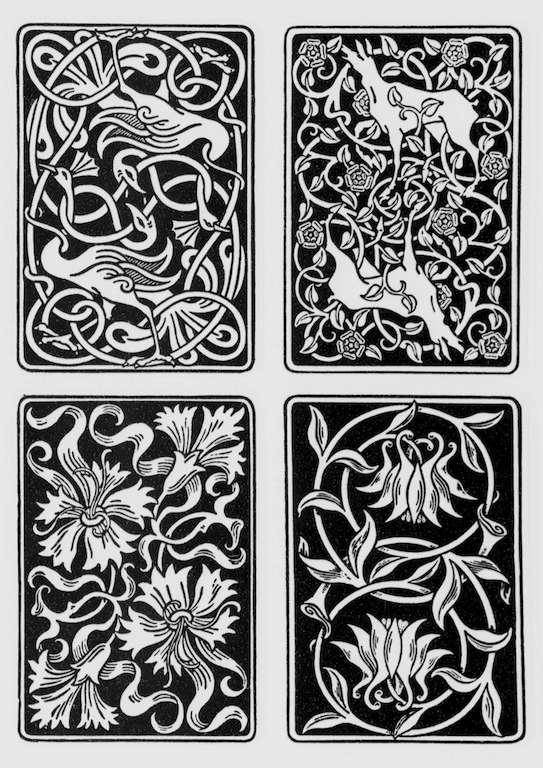