Gurney was not the only printer who went briefly into the playing card business during the twentieth century.

Peter Gurney is probably best known for his card game Panko, a light-hearted look at the suffragist movement in Britain. Several of the cards represent contemporary politicians, such as Lloyd George and Winston Churchill. 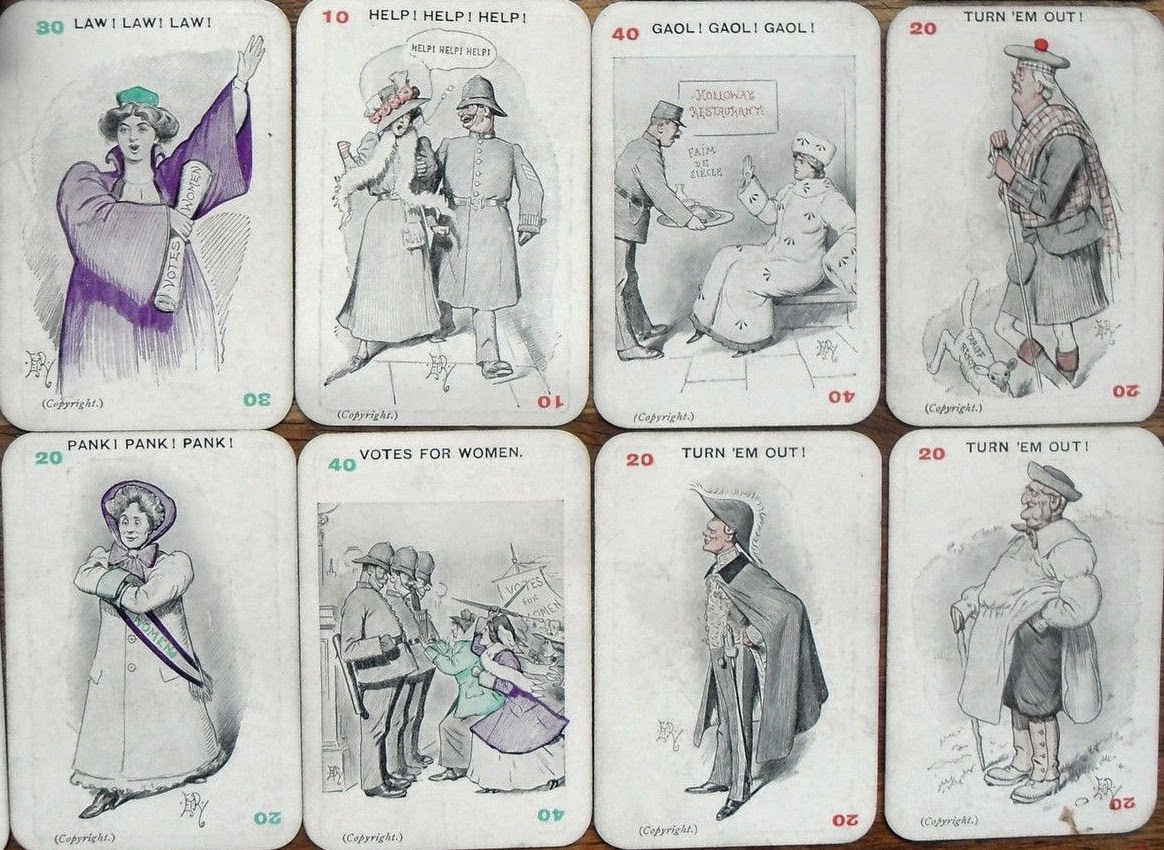 However, he also produced an elaborate version of the English pattern at about the same time. It's called Verdye and the background of all the cards is green. The style of the courts is probably best described as Arts & Crafts. For a modern reproduction of these unusual courts, see page 51. 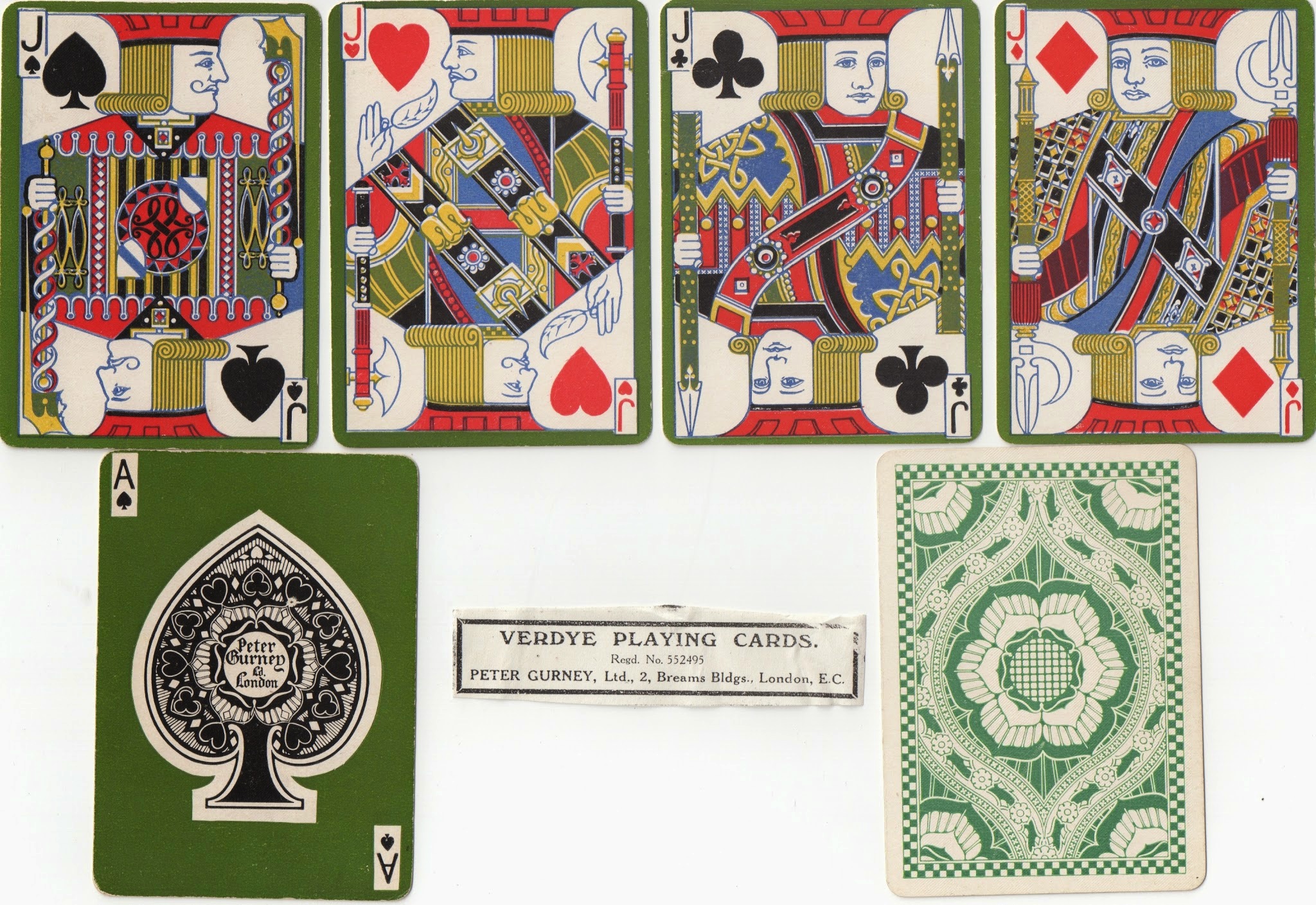 Above: Verdye, c.1910. Coincidentally, he's at 2 Breams Buildings, a few doors away from where Joseph Reynolds started his firm a hundred years earlier.

Gurney was not the only printer who went briefly into the playing card business during the twentieth century. Around the turn of the century the postcard maker, Valentine, also made cards for a short period, in particular for the Isle of Man with pictorial aces. Again, they have their own courts, which were also used in miniature fortune-telling packs and a Soldier's Compendium wallet along with card dominoes and draughts. 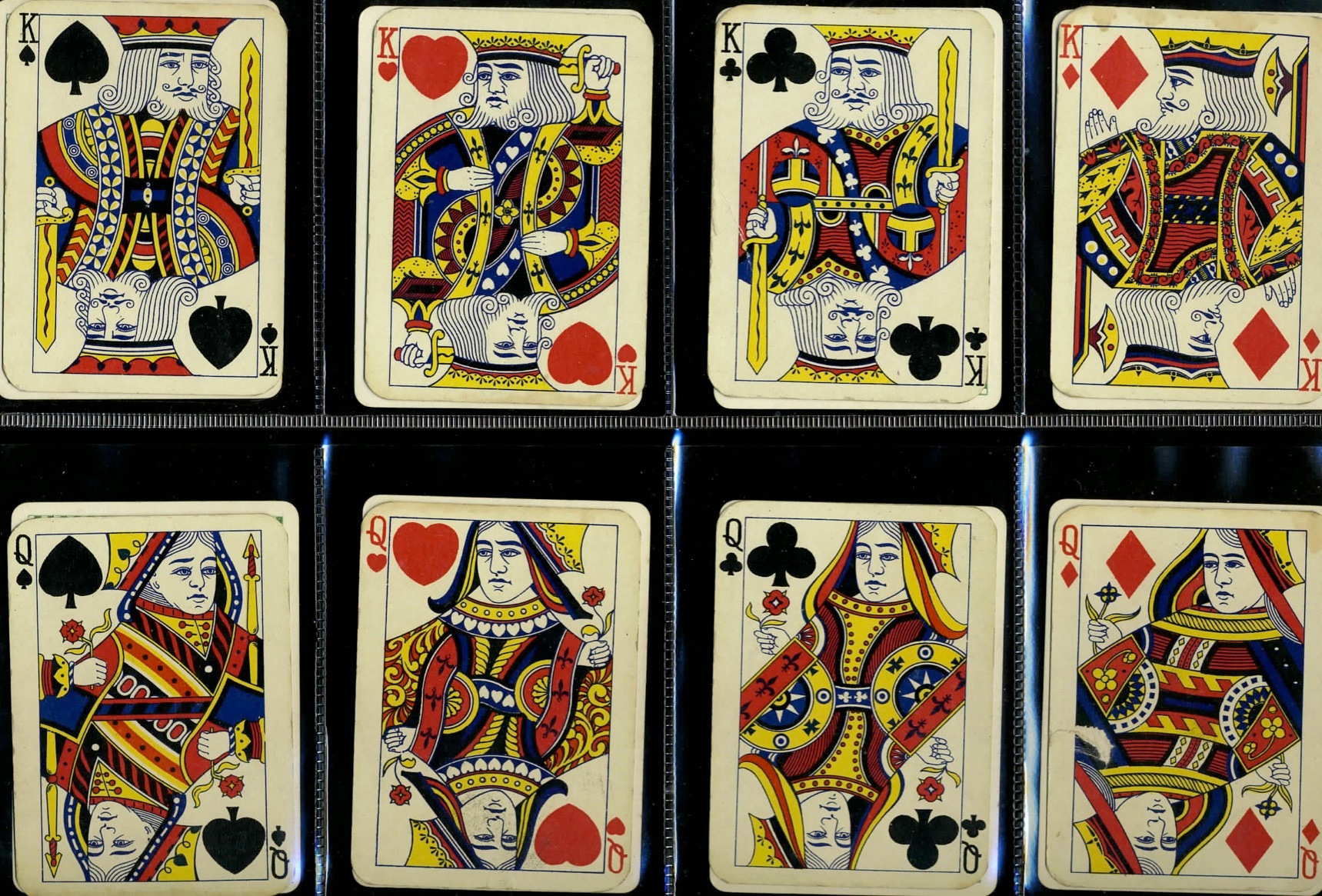 Just after the First World War the Liverpool Daily Press, which had up-to-date printing facilities, produced a pack for the Liverpool Co-op. This had specially designed standard English courts. 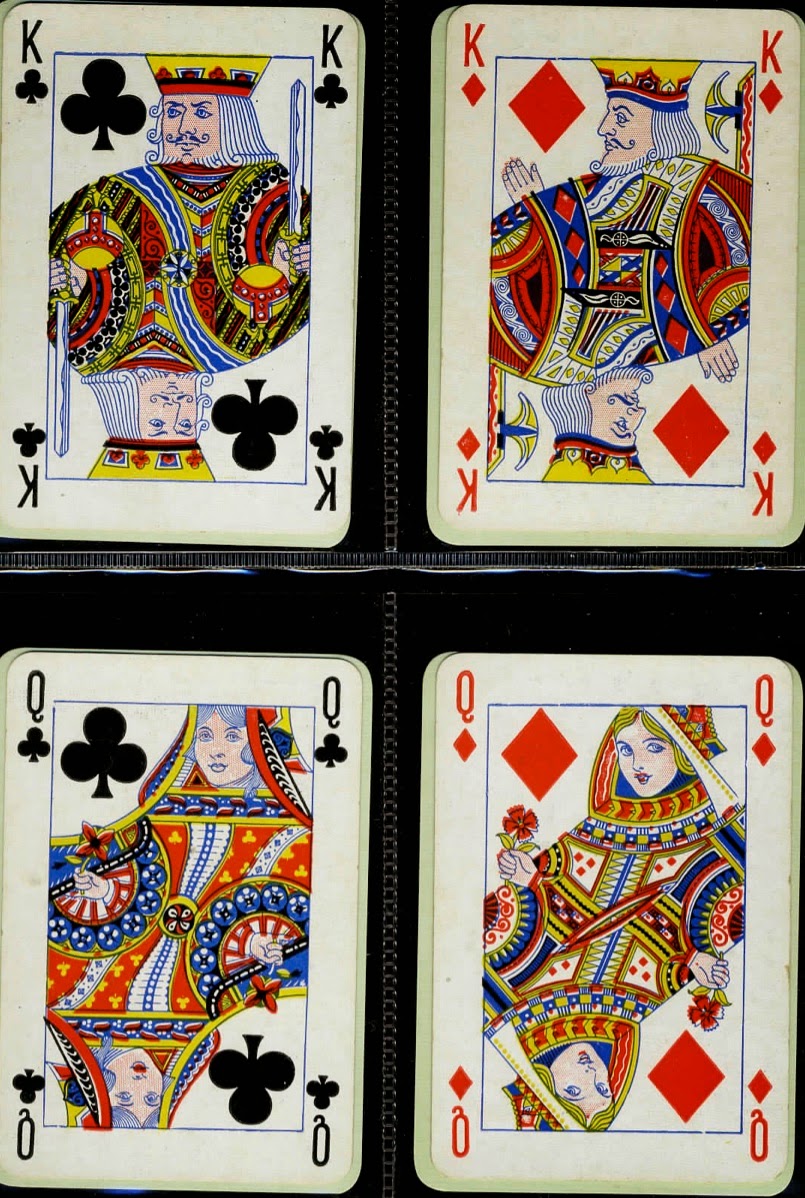 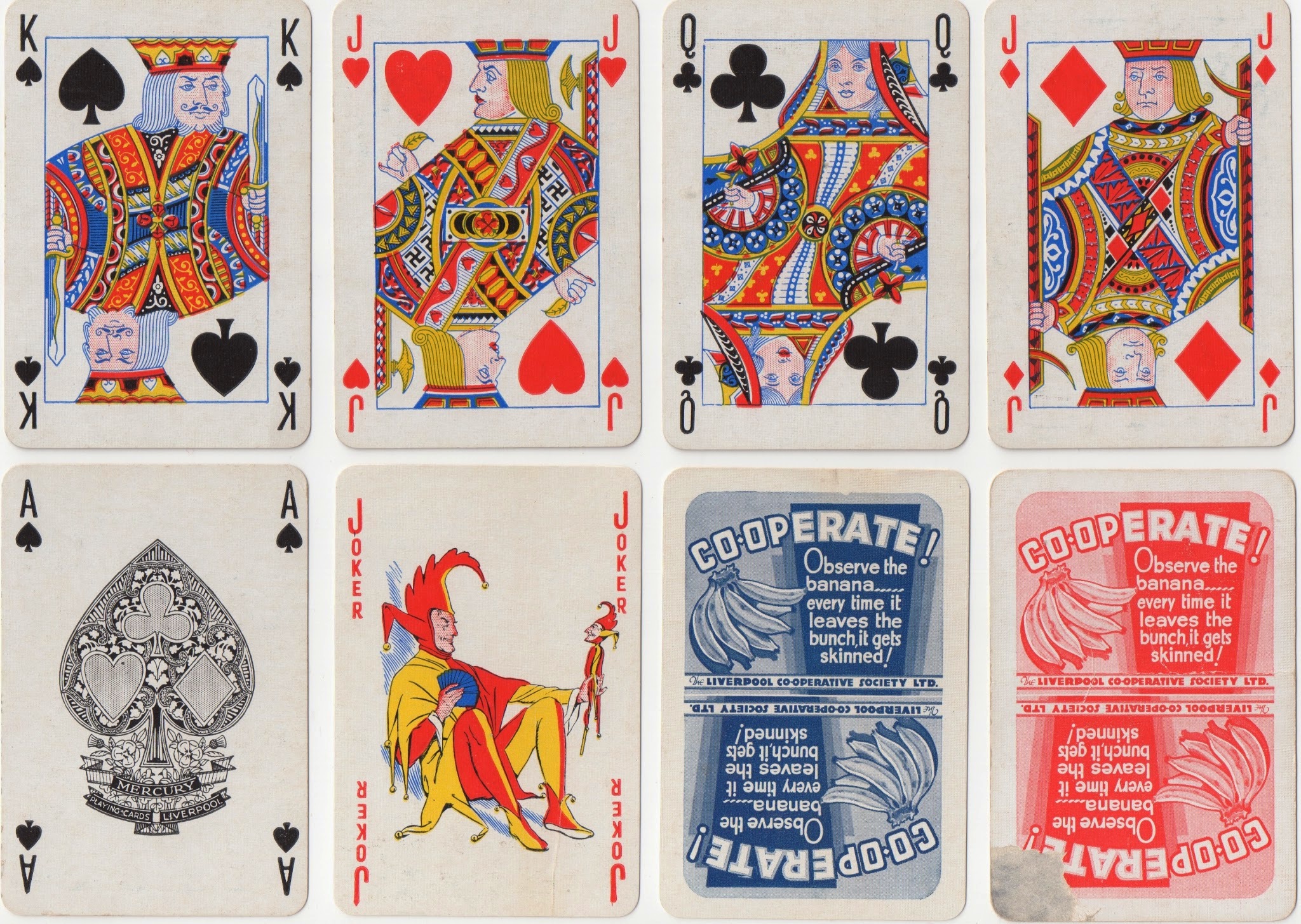 During the 1930s Berkshire Printing Co, Reading, and CWS, Manchester, both had short spells making cards. The Berkshire courts have been modelled on Waddington's contemporaneous design, but the colouring and details of the clothes are quite different. 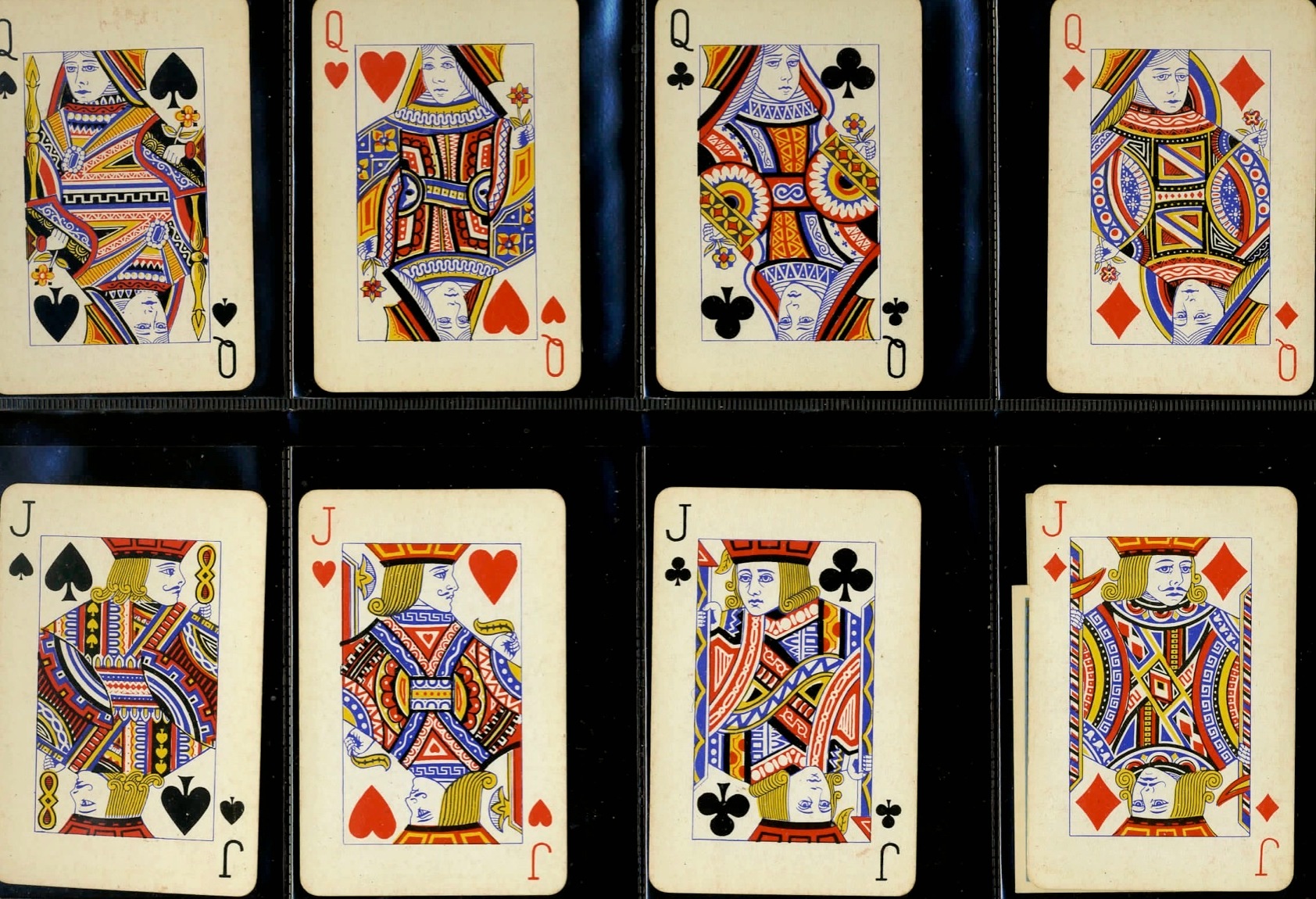 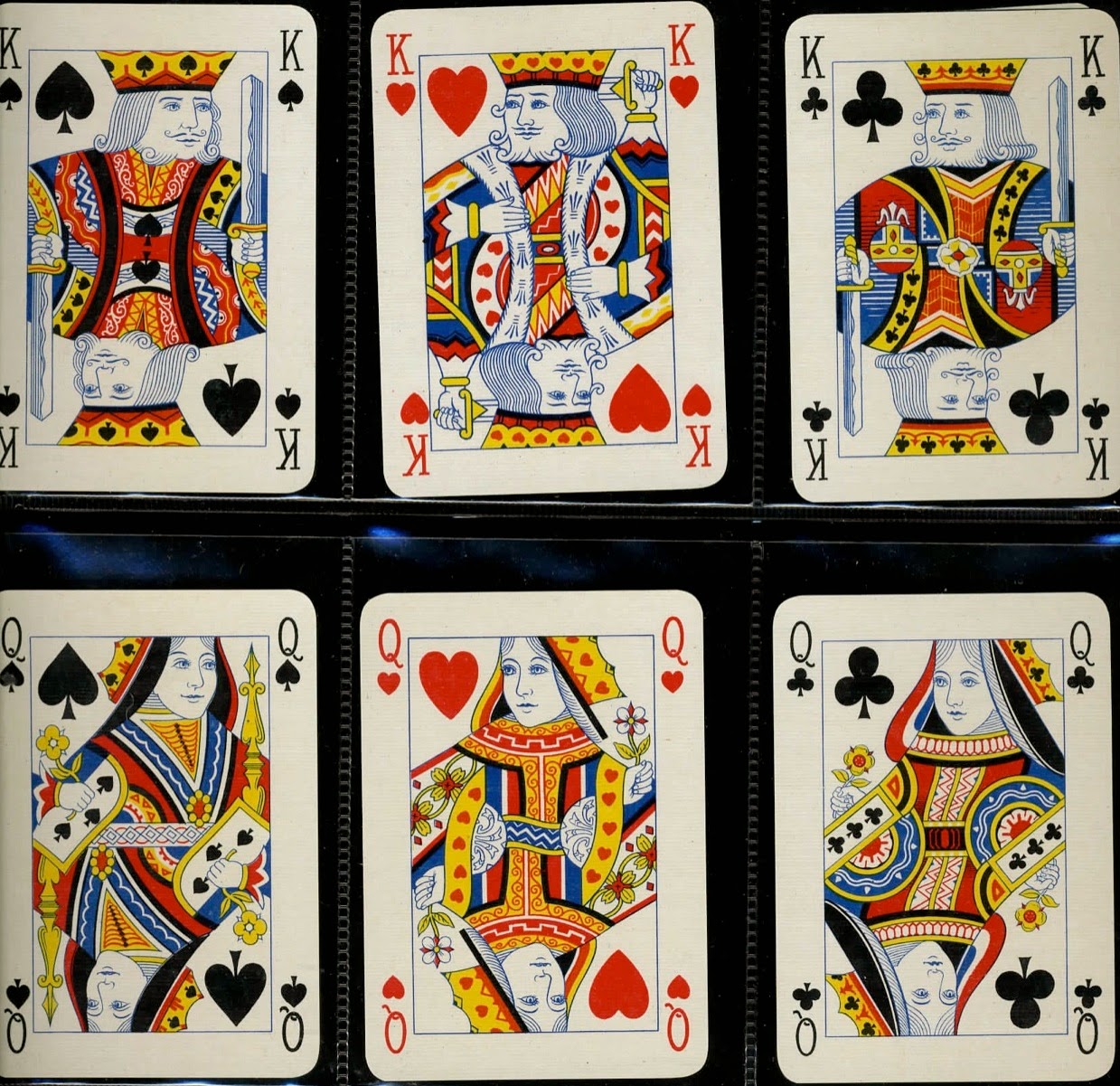 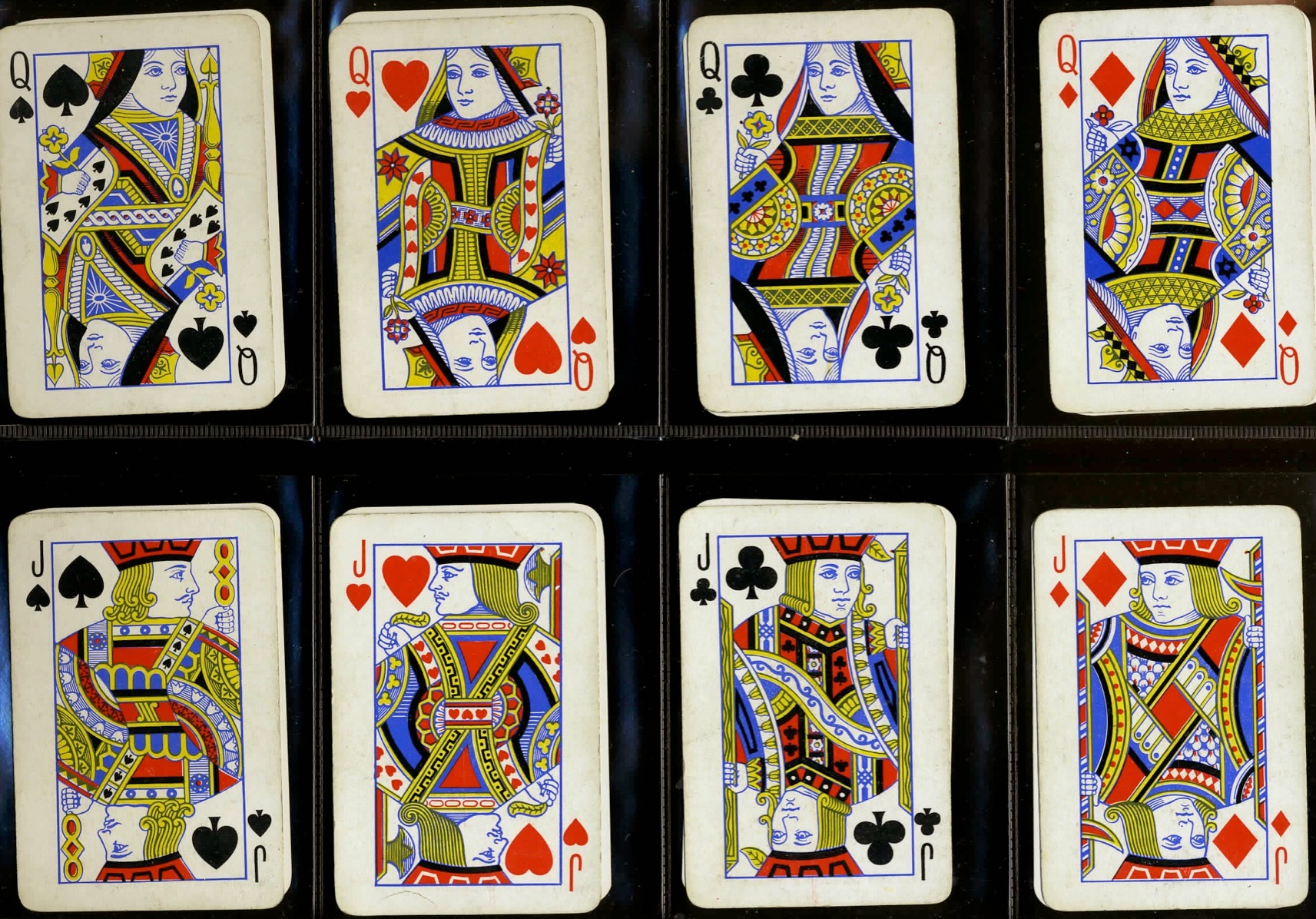 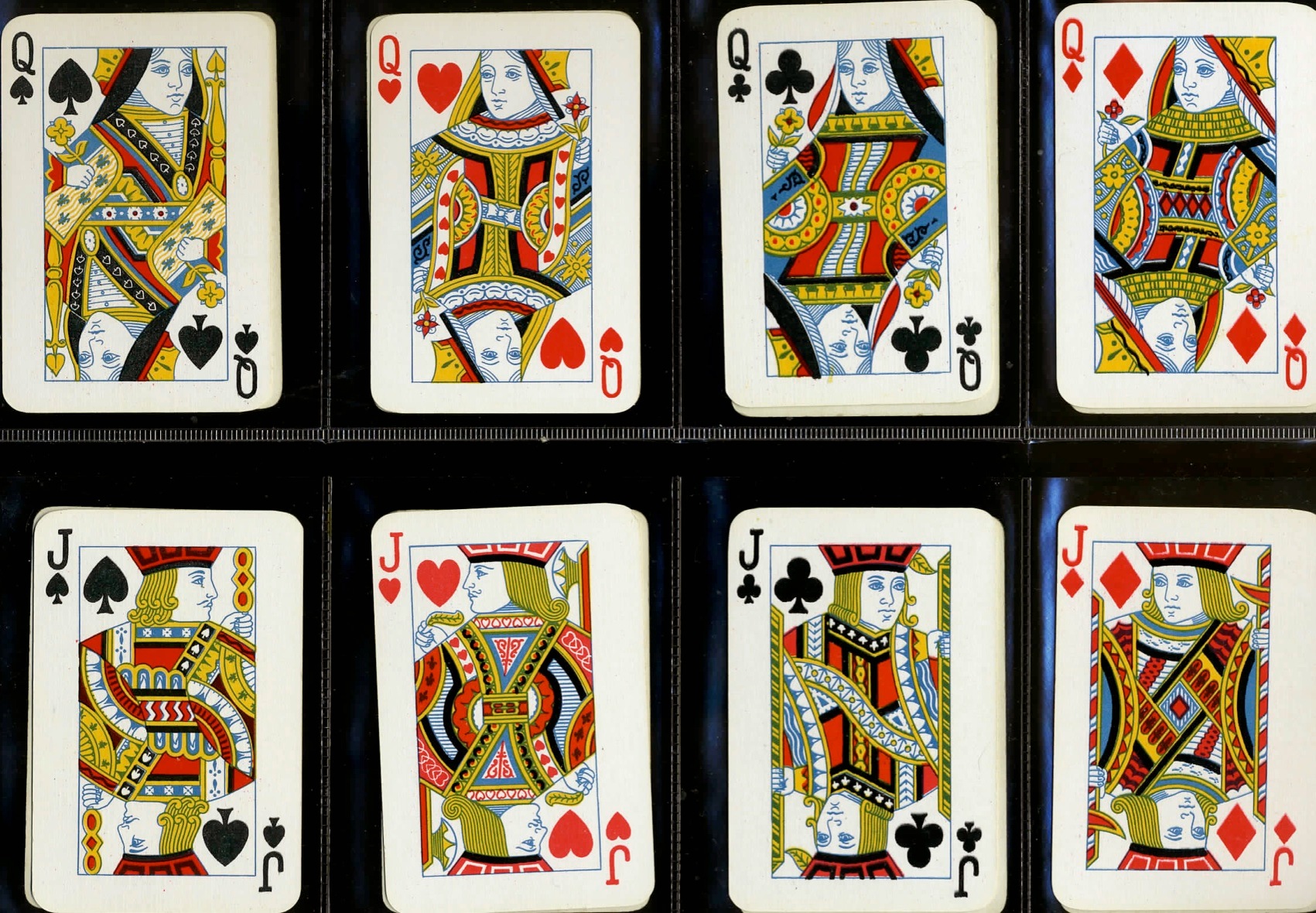 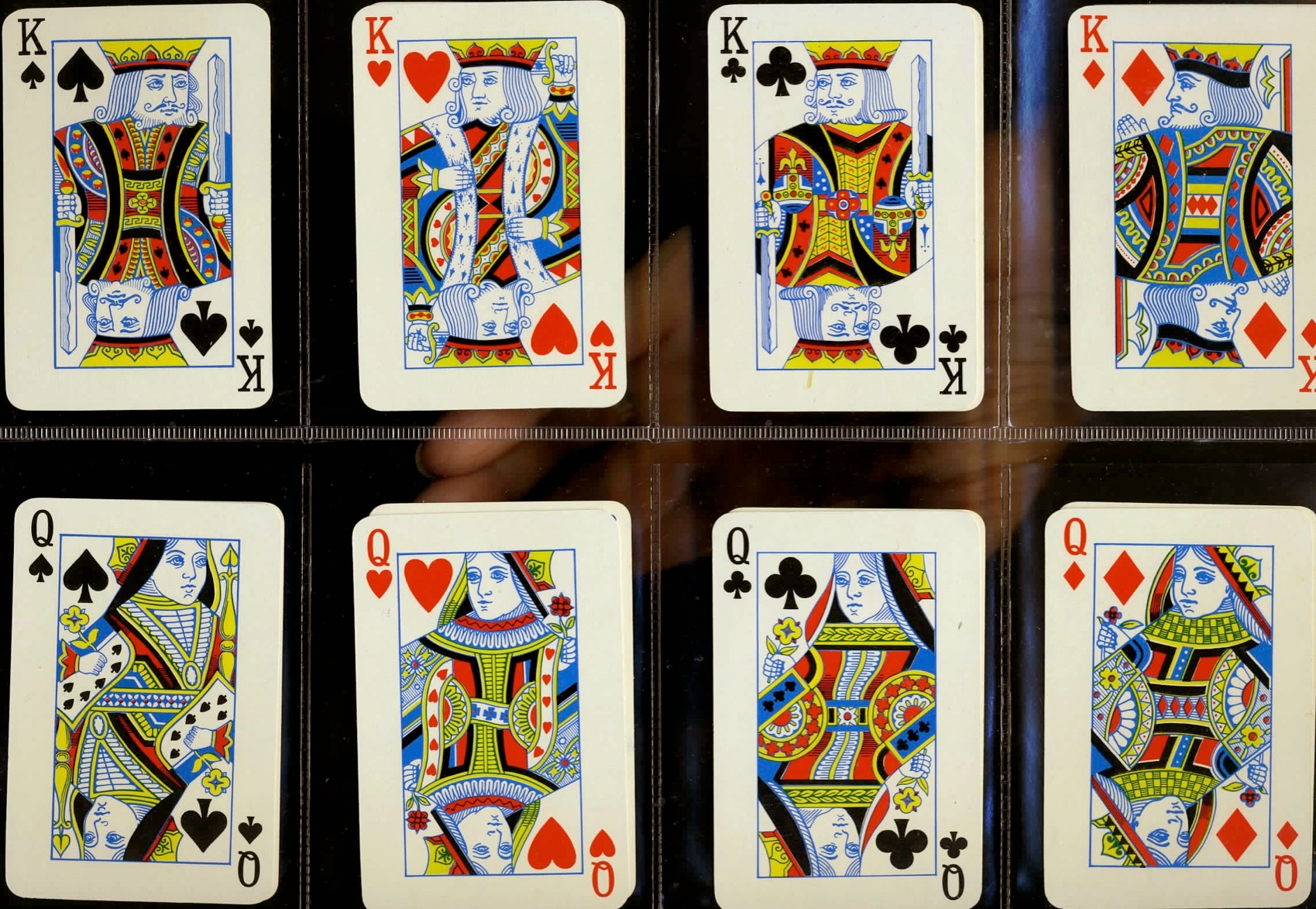 There's a pack, probably from the 1950s, that was made specially to advertise Sunspel underwear. The printer was Breedon of Long Eaton, Nottinghamshire, close to where the Sunspel factory was at the time. The Sunspel name was used first in 1936 and is still in use today. It's difficult to find out much about Breedon, but if the registration numbers on the AS and joker (865295 & 96) can be dated, that would be useful. Any suggestions?

In the 1980s and 90s there were a few more minor makers. The biggest of them was Astra Games, which was part of the McCorquodale group, but it only lasted from c.1982-87. The courts were a copy of Fournier's design. 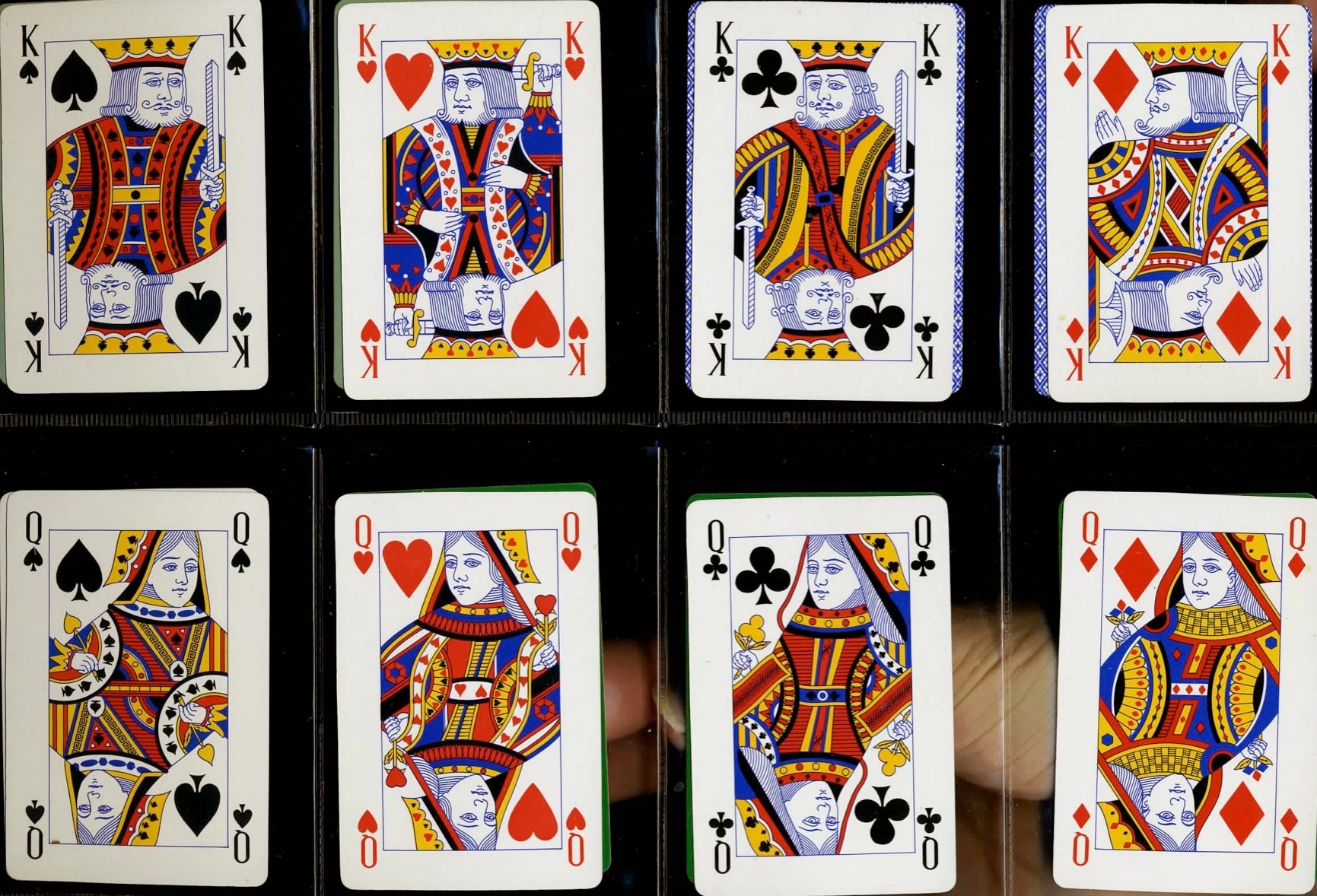 They also produced an advertising pack for Kestrel lager with green and gold on the courts. 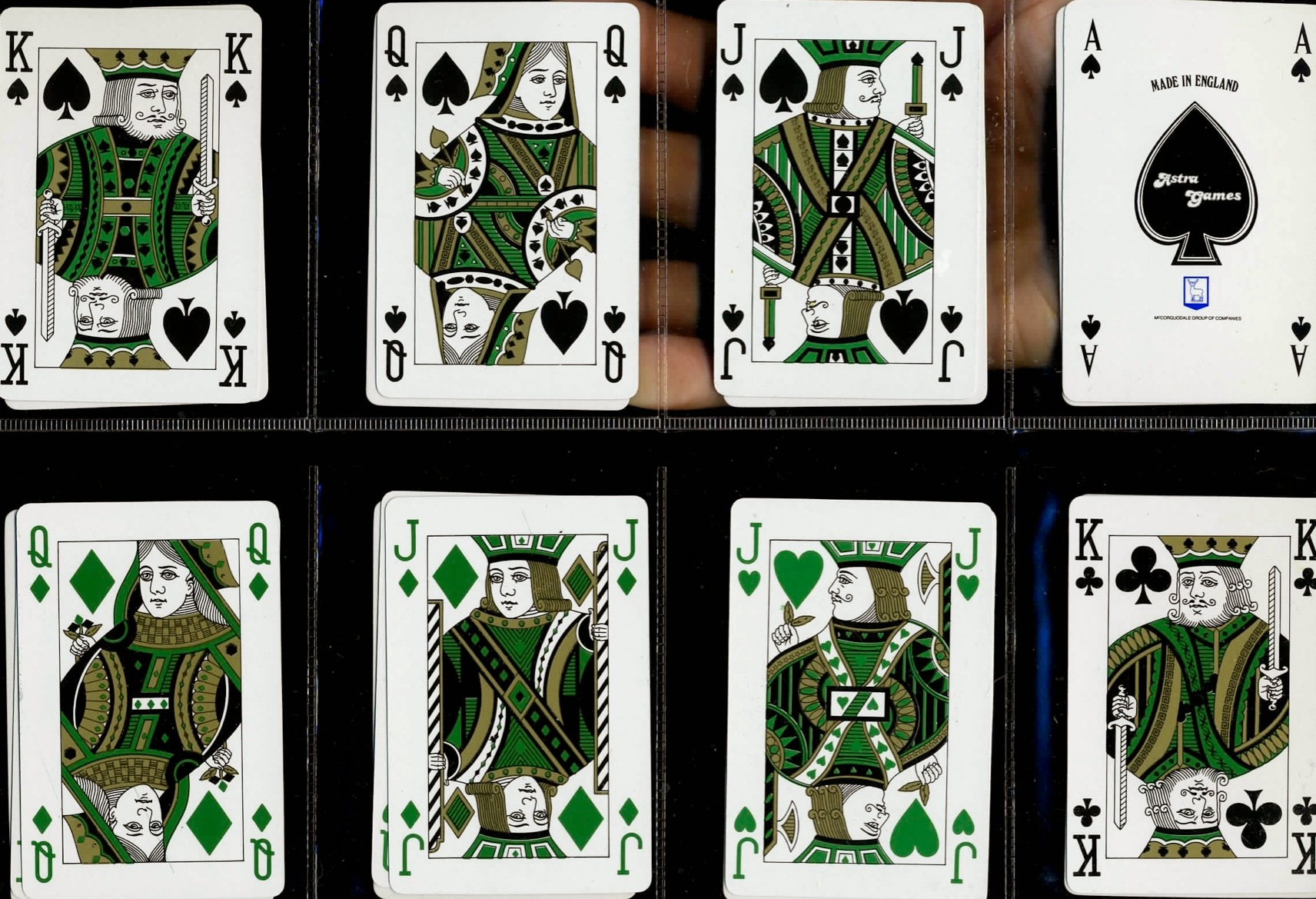 After this firm disappeared, another smaller operation took over some of the accounts, such as the National Trust. Whether this was some kind of buy-out arrangement, I don't know. The courts are similar to those of Astra, but with some of the traditional features put back, such as the KH's hands on opposite sides of his body, and the KC's orb. 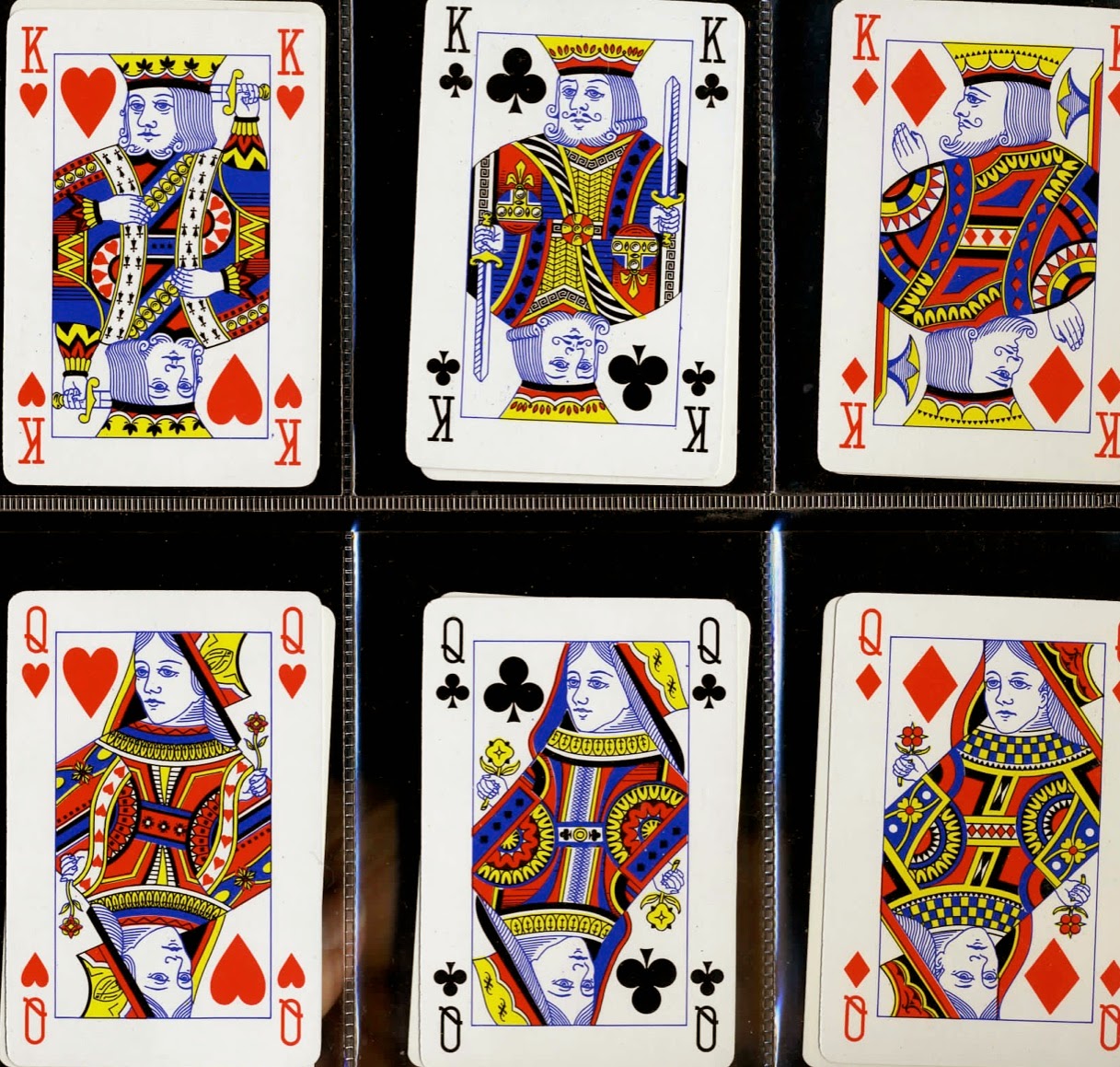 This firm lasted for an even shorter period, roughly 1987-89. The quality and finish of the cards of both makers was not good enough for serious players: they stuck together easily.

An even more obscure firm is Trevor-Hobbs, who operated about the same time. They produced cards based on the Chinese version of Whitman's courts - a lovely example of the copiers being copied! 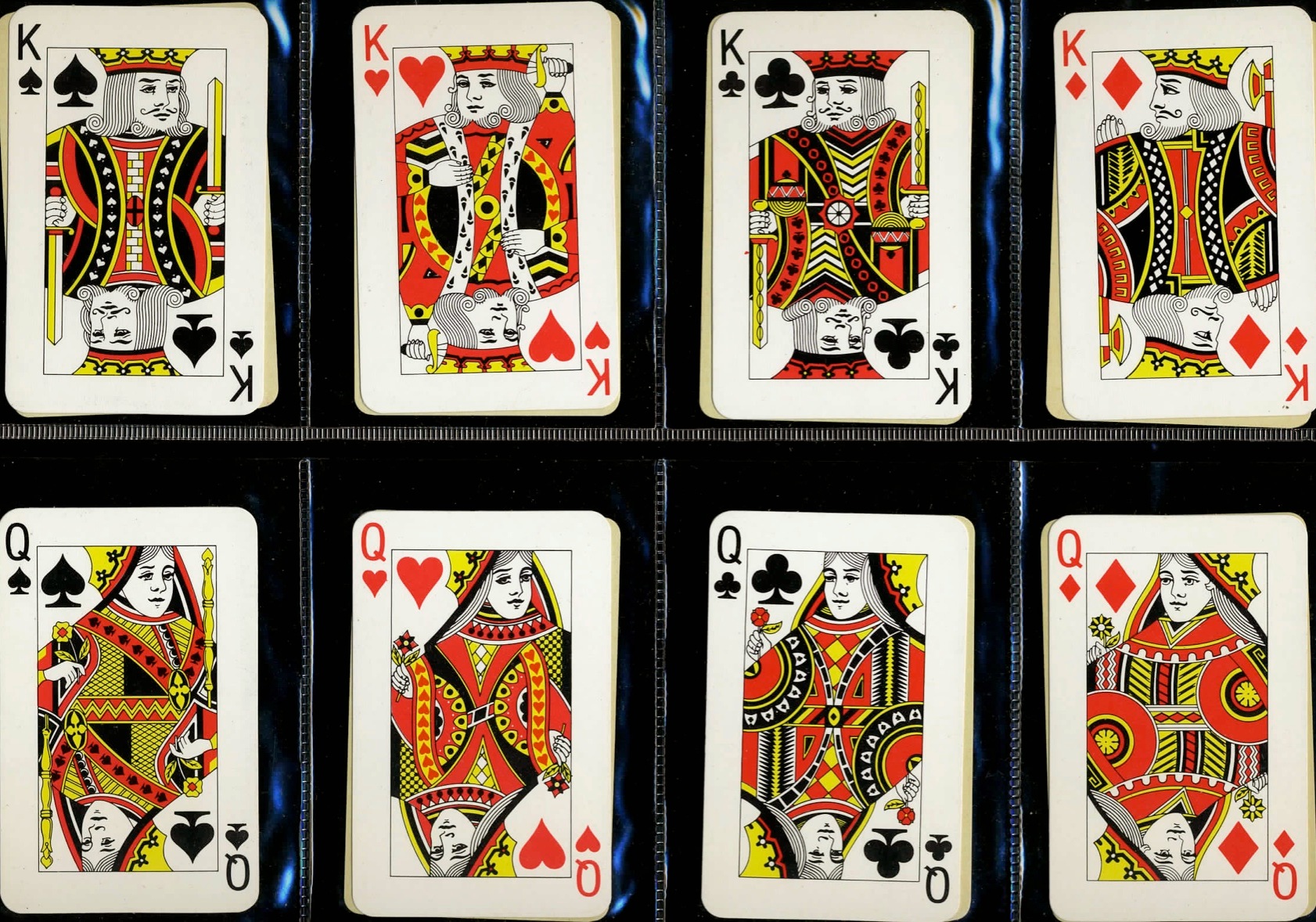 For further details of some of these makers and others, too, see: www.wopc.co.uk/uk→