Yet another strand of the playing card world is that of card games, packs of cards usually designed to play just one game. The commonest are Happy Families and similar collecting games, and Snap, but the variety is as great as in ordinary playing cards.

What about a change? Yet another strand of the playing card world is that of card games, packs of cards usually designed to play just one game. The commonest are Happy Families and similar collecting games, and Snap, but the variety is as great as in ordinary playing cards. They range from the downright boring - does anyone ever get excited by Lexicon? - to the pictorially inventive, and from top quality printing to basic cheap products that can hardly be played with. I know little about this area and got rid of the few I had many years ago (though I still like to play Main Line), so Rex Pitts has kindly provided scans of the more interesting old games. The first ones illustrated here are by Globe Games. They were made between about 1890 and 1920 by Oppenheimer und Sulzbacher of Nuremberg. They produced a range of high quality games for the English market and a few very low quality games for the cheaper end of the market. The first is National Families. I hope these quaint stereotypical views of "foreigners" don't produce an international crisis! Anyway, it's a less serious side of English arrogance! There are 13 families in total. 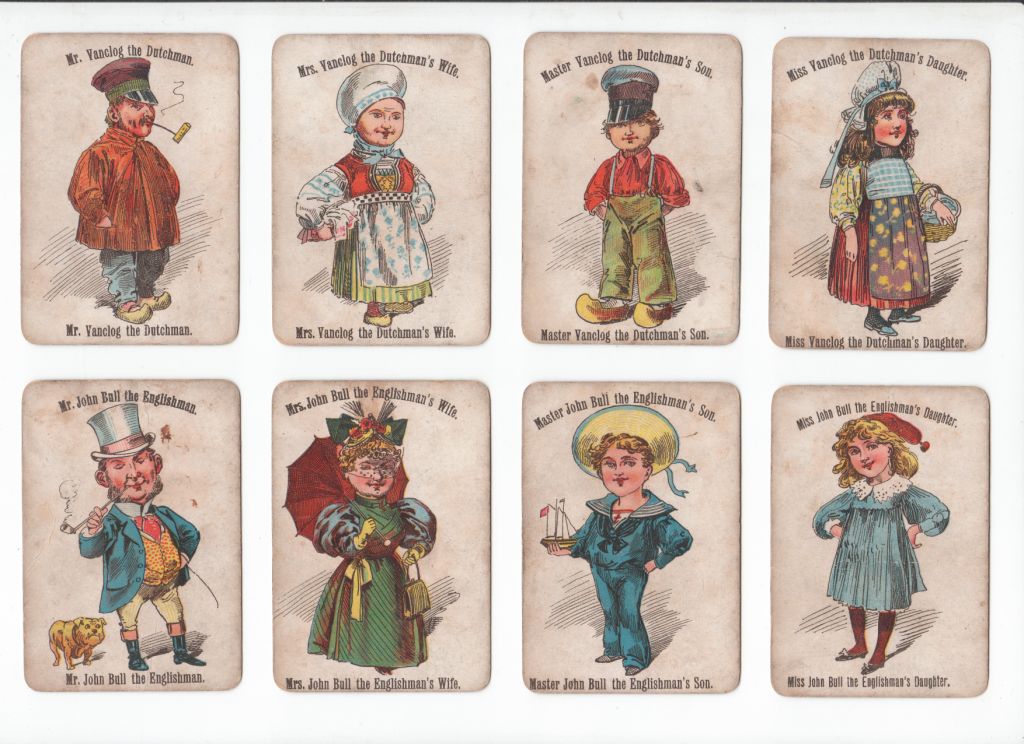 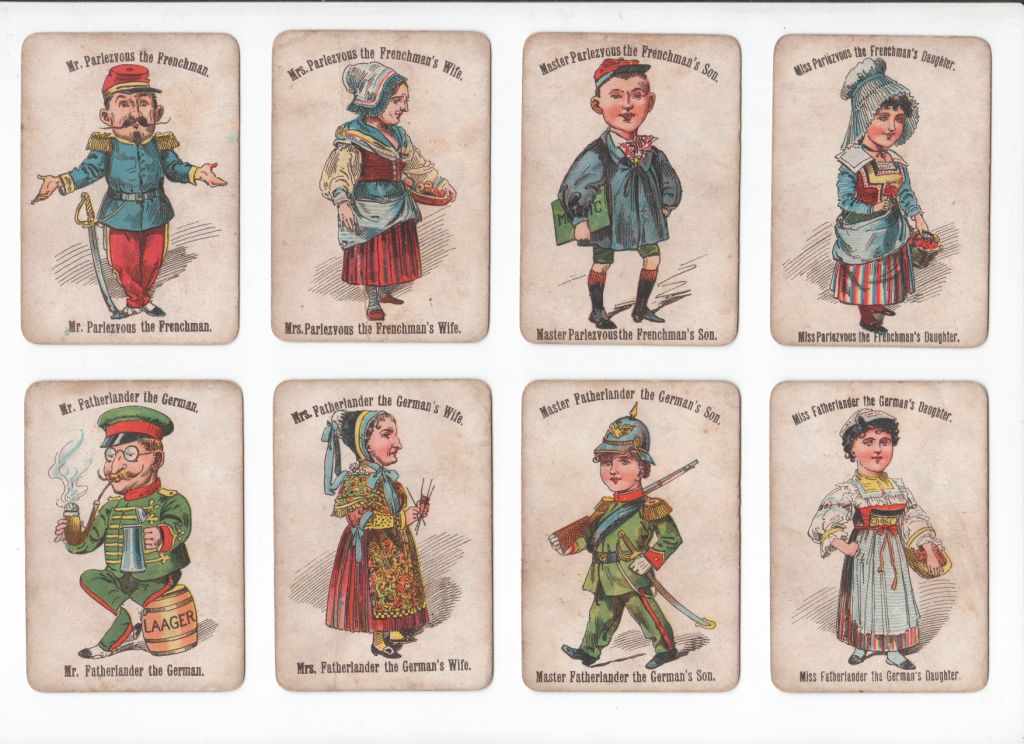 Nice to see a German manufacturer portraying the English idea of a typical German!

Next is Fairy Snap. 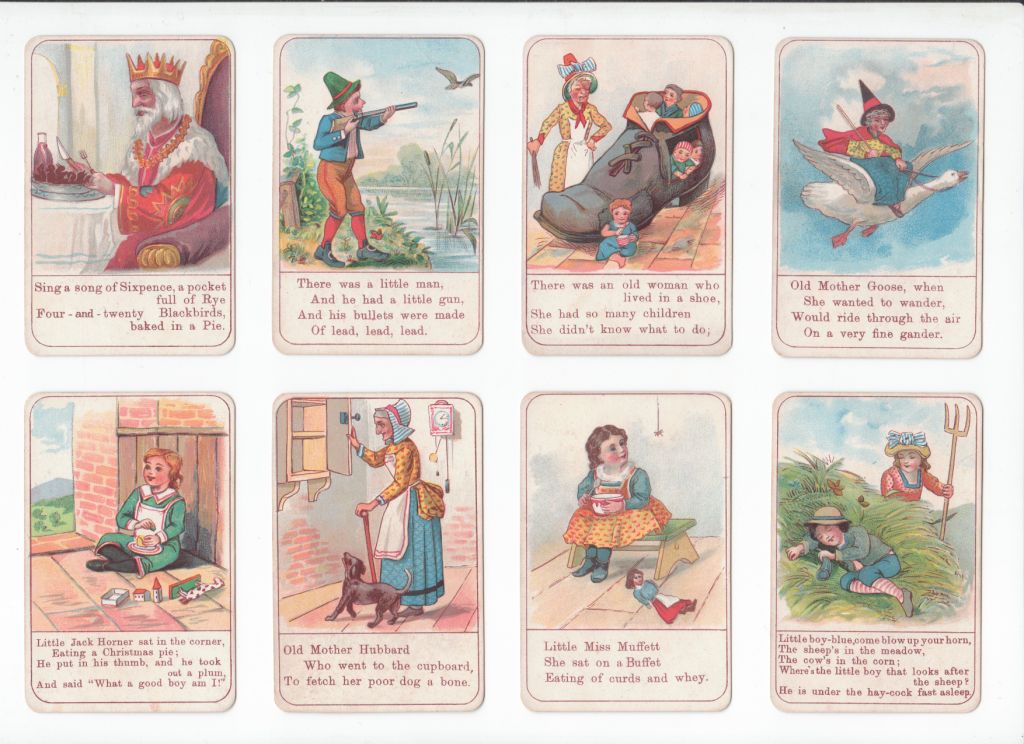 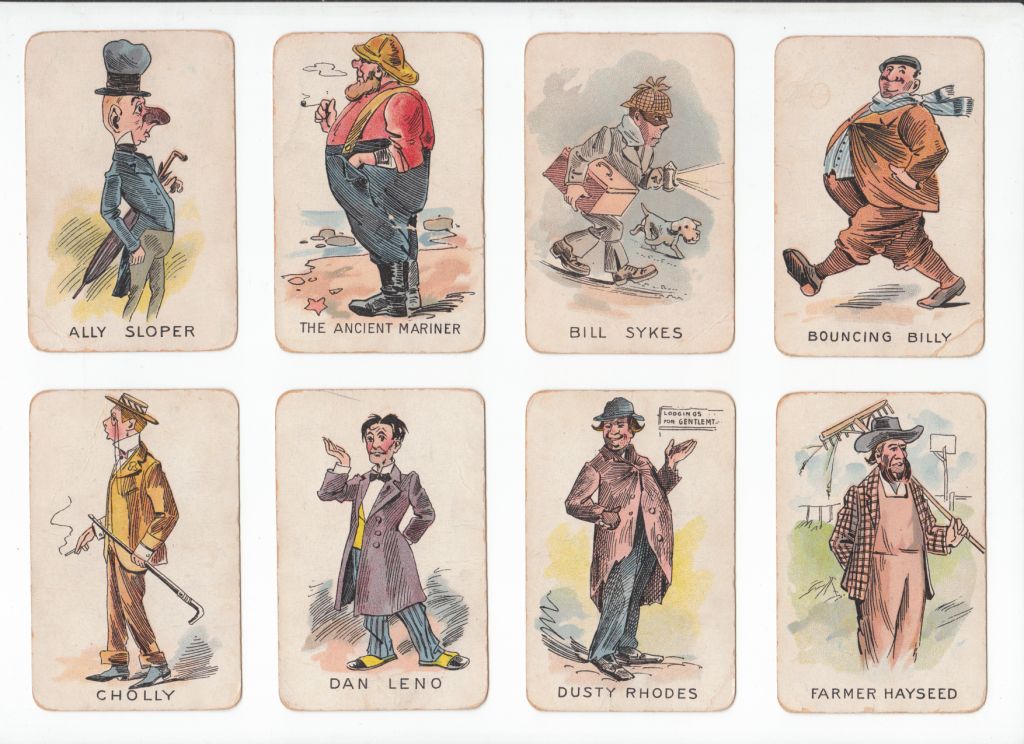 Thanks to Rex for the following information on some of the characters:

Dan Leno was a leading English music hall comedian and actor, famous for his portrayal of “dames” in pantomime 1860 – 1904.

Weary Watkins was a slang term for a lazy person at the time.

Ally Sloper was a cartoon character who first appeared in 1867 in Judy, a rival to Punch. He had his own comic by 1884 and lasted for 30 years.

Bill Sykes is an obvious name for a burglar after Bill Sykes in Oliver Twist by Dickens.

Marto, some kind of put-and-take game. 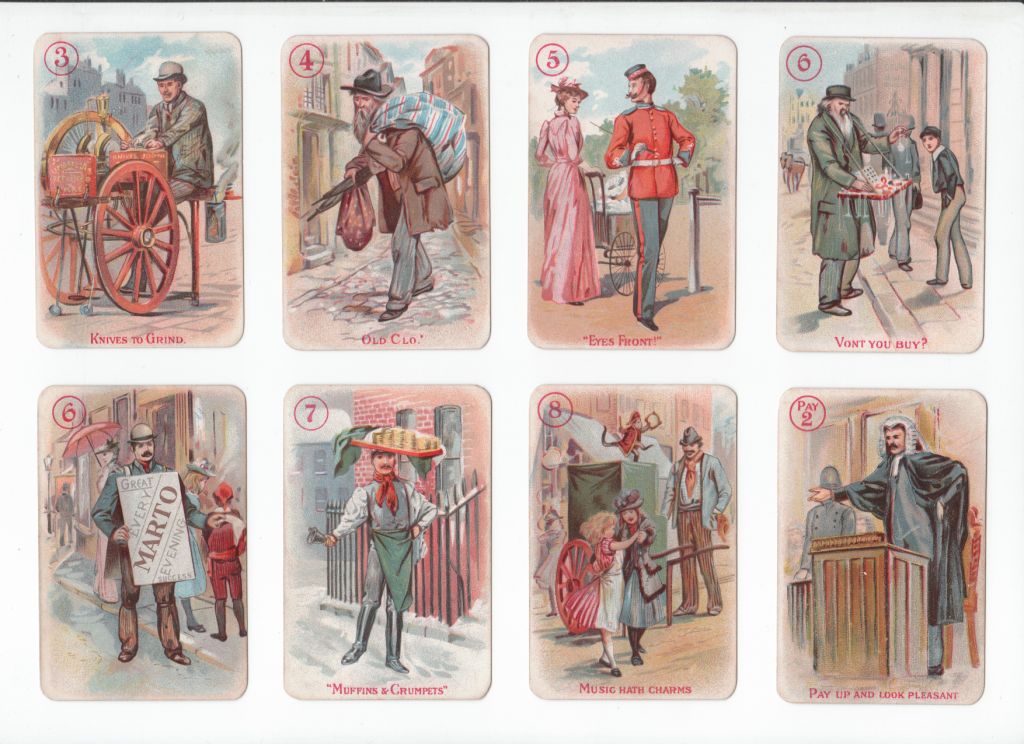 A Snap game produced in chromolithography. 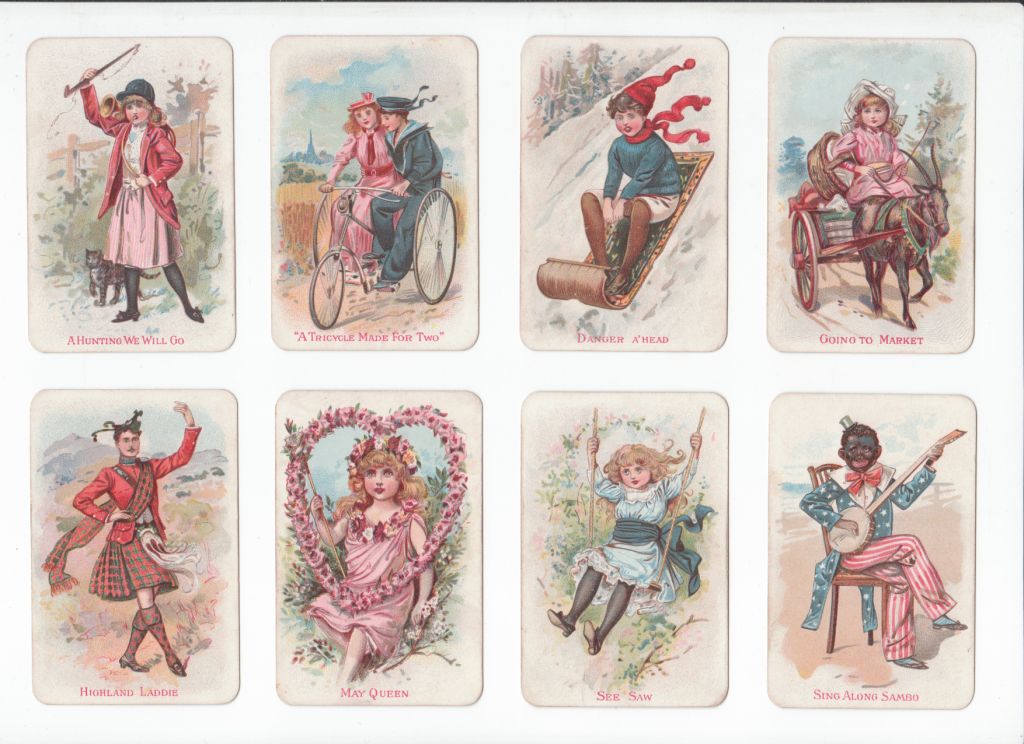 And finally by Globe, Sons of the Empire, a tongue-in-cheek look at Victoria's armed forces, c.1900. 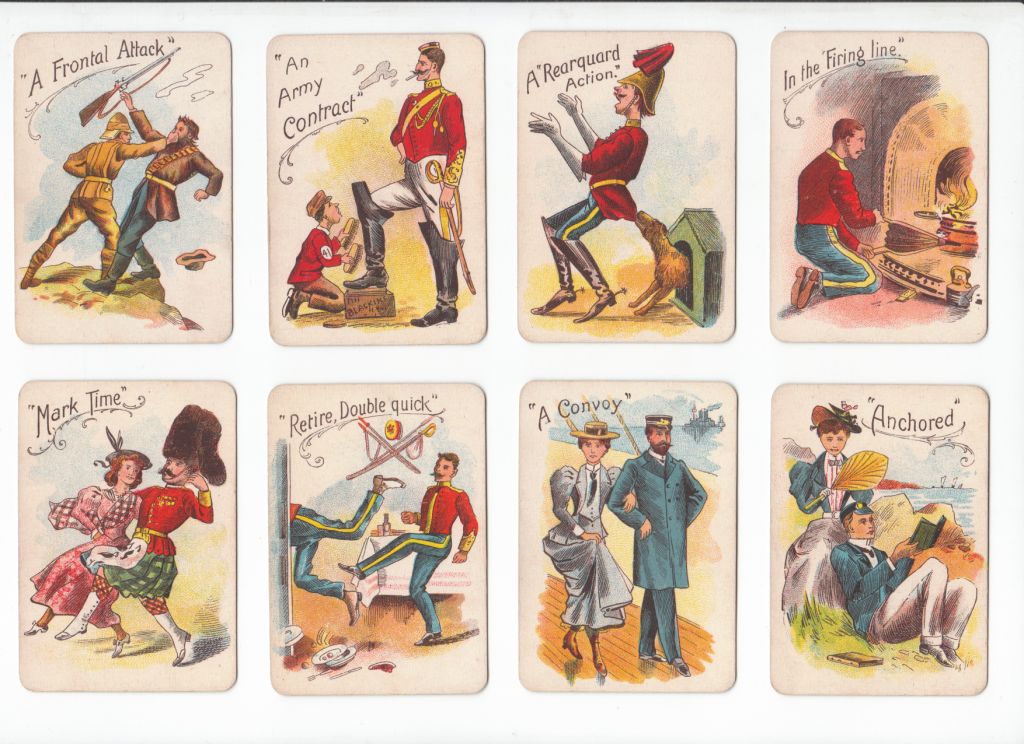 In contrast here is a game that was made in England and published in Norwich: Caught in a Trap.

This game was published in around 1900 by A. J. Galpin. Galpin’s was a toyshop in Norwich Market Place, opened in 1898 or 1899, when Mr Galpin moved to Norwich from Dorset. In 1910 he moved the shop into the new Royal Arcade in Norwich, which had opened in 1899. When Mr Galpin died, his daughter took over the business. During the First World War Miss Galpin went to Europe to be a nurse caring for injured soldiers. In 1923 Galpin’s was bought by a competitor called James Langley, who had a rival toy shop in Prince of Wales Road. Before WWI this was a grand Edwardian shopping street, but Langley moved all his business into the Royal Arcade. Langley’s became a very successful business and by 1973 was the second largest toyshop in England after Hamley’s in London (though this no longer is the case). It continues to flourish today, still in the Royal Arcade, as part of the Toymaster chain. 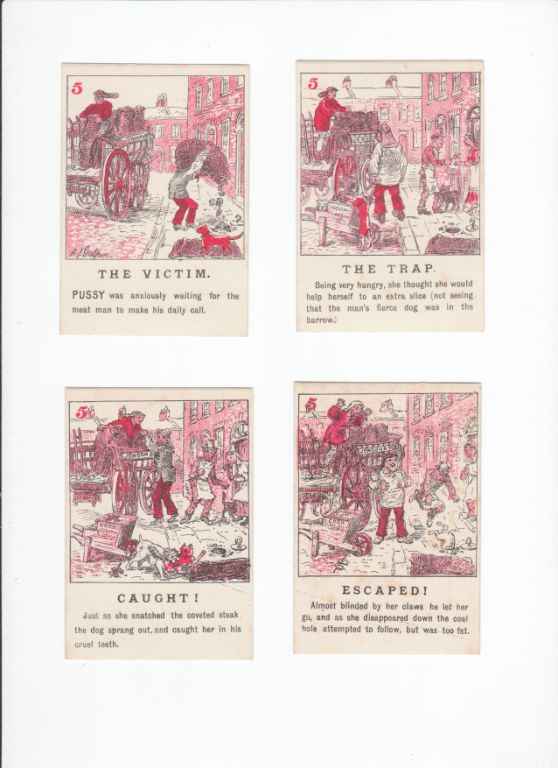 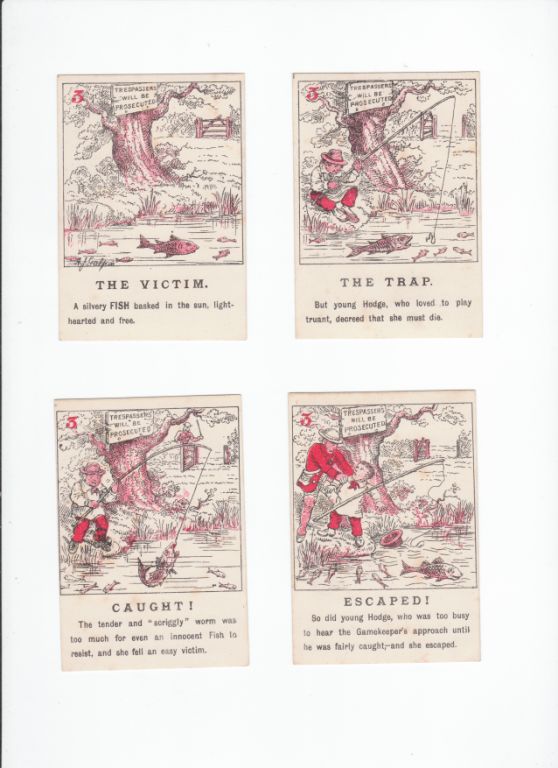 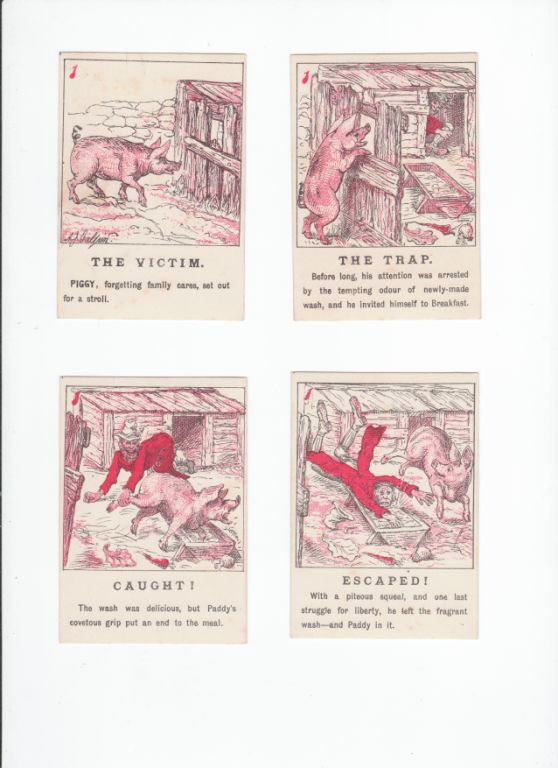 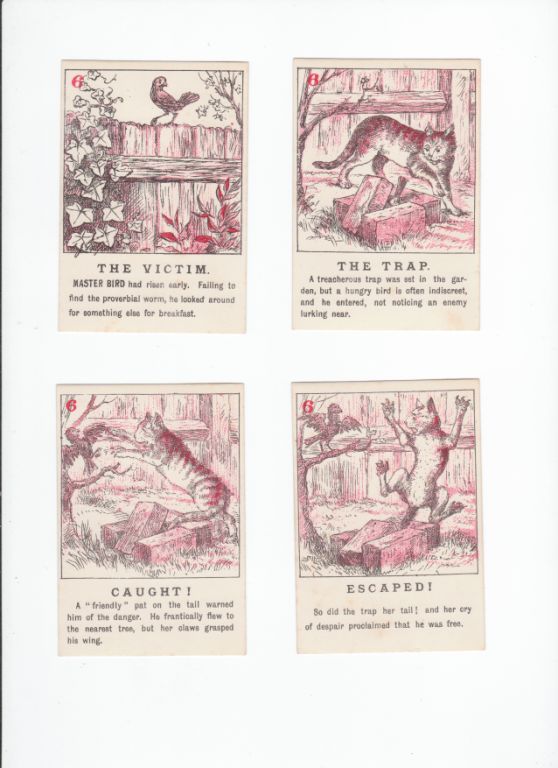 The following is a selection of other English games.
An anonymous advertising Happy Families game for Cosmos Lamps, 1930s. 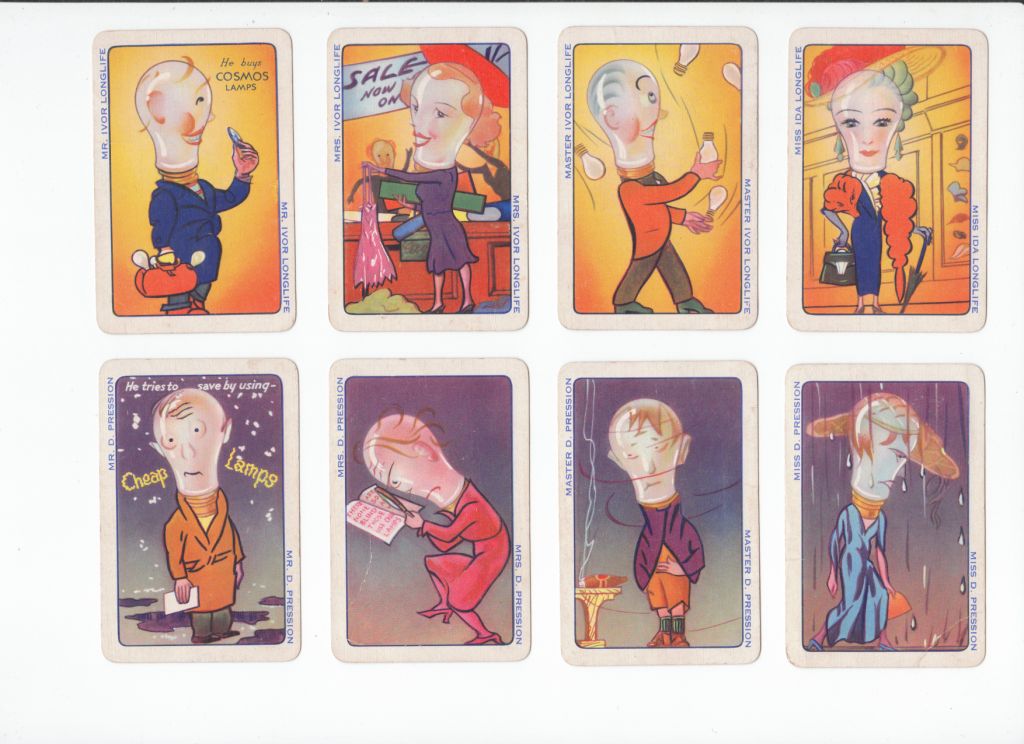 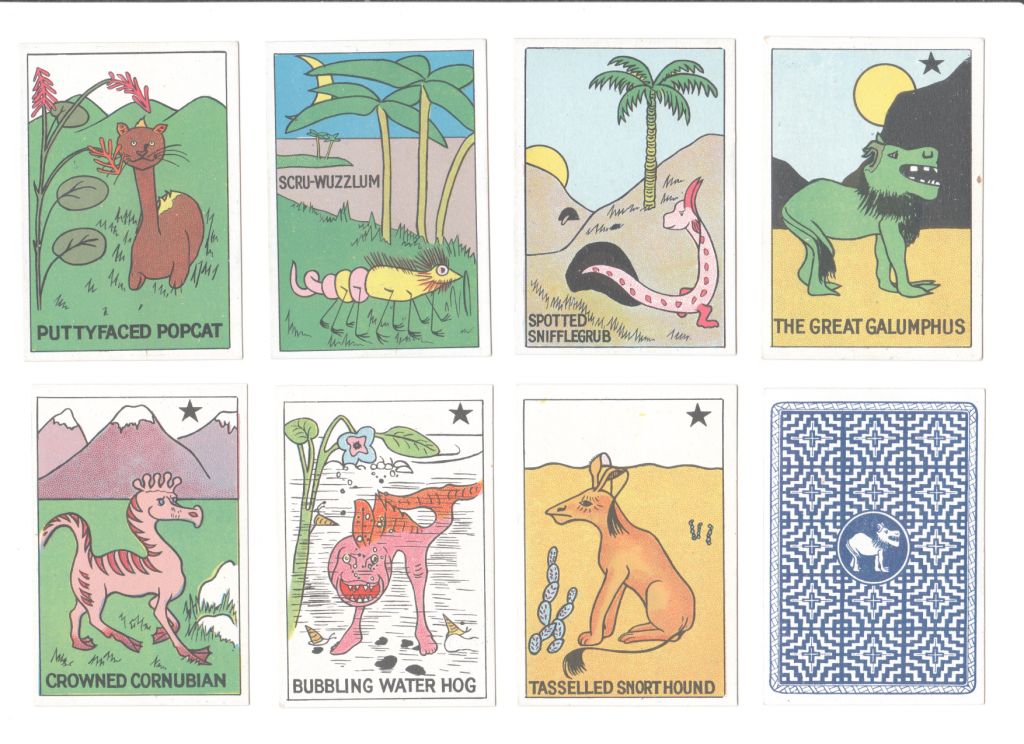 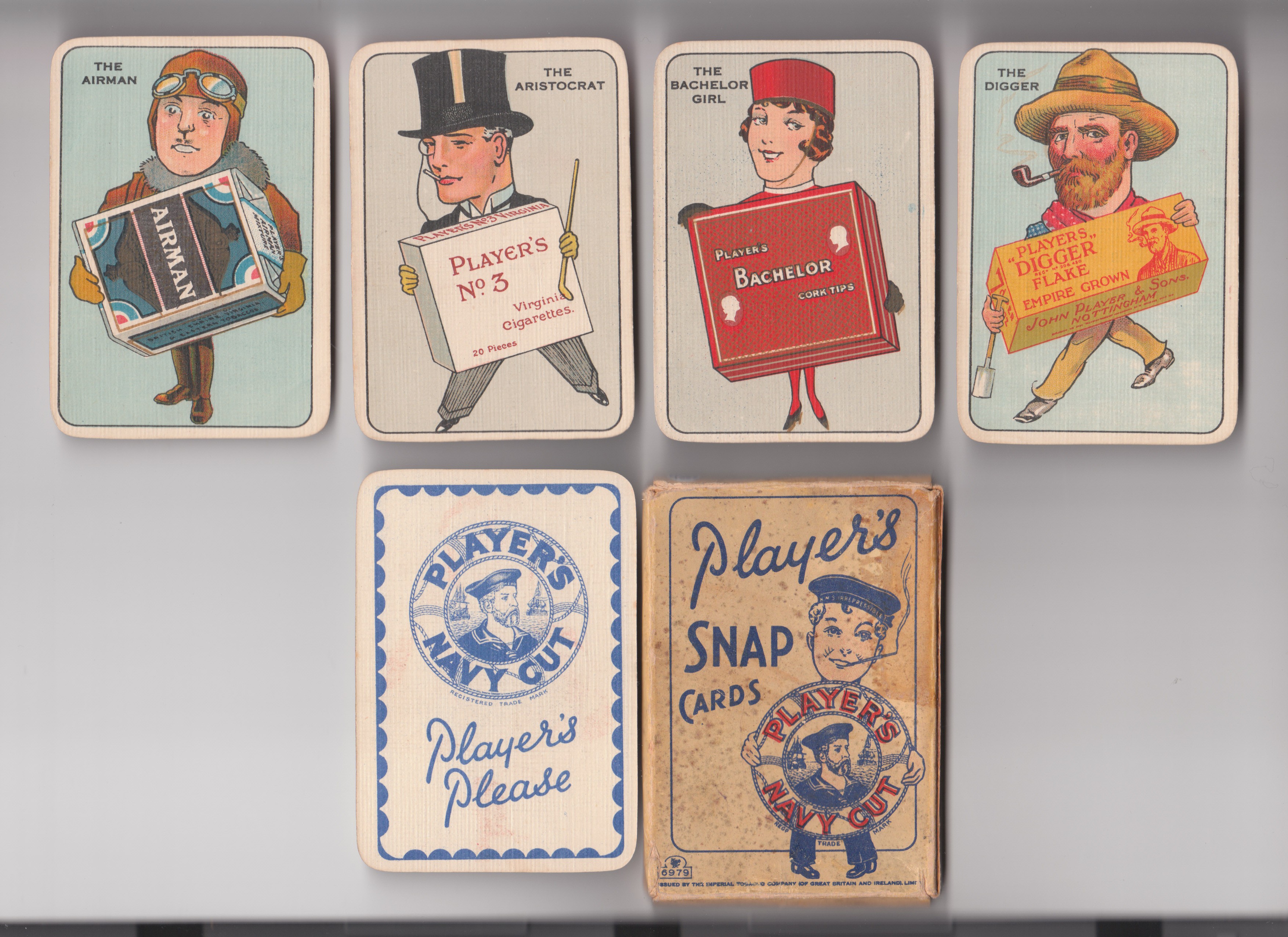 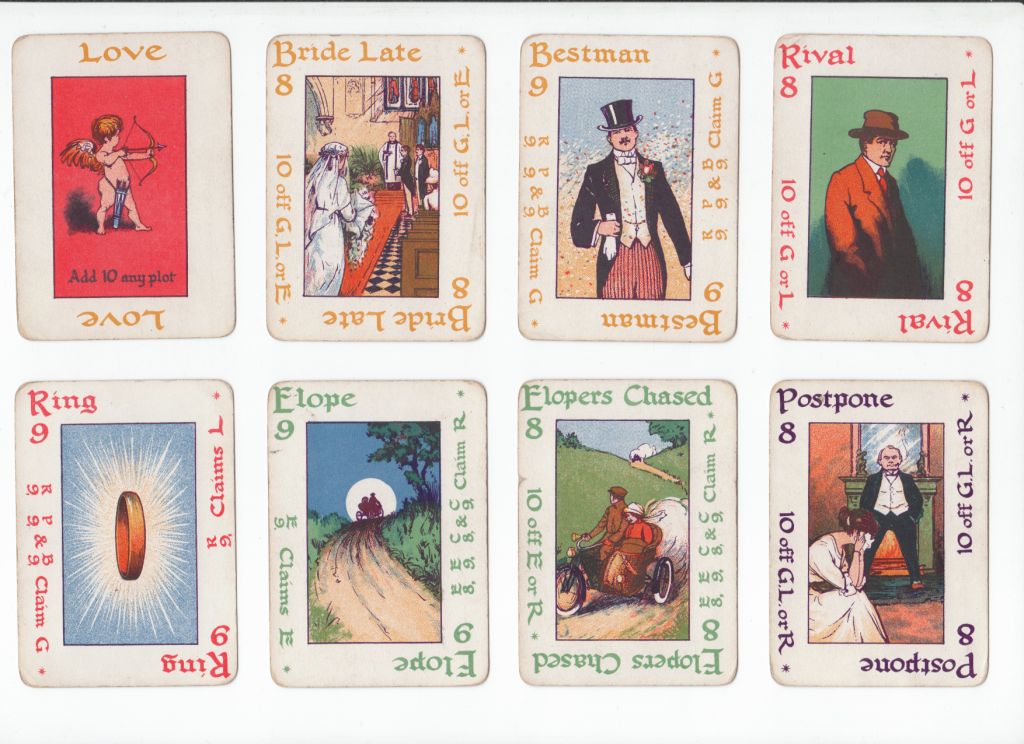 Faulkner's Misfitz, an unusual one from c.1902, title not known, but could be something like Pantomime or Nursery Rhymes. Does anyone know? Here are just two of the eight sets. 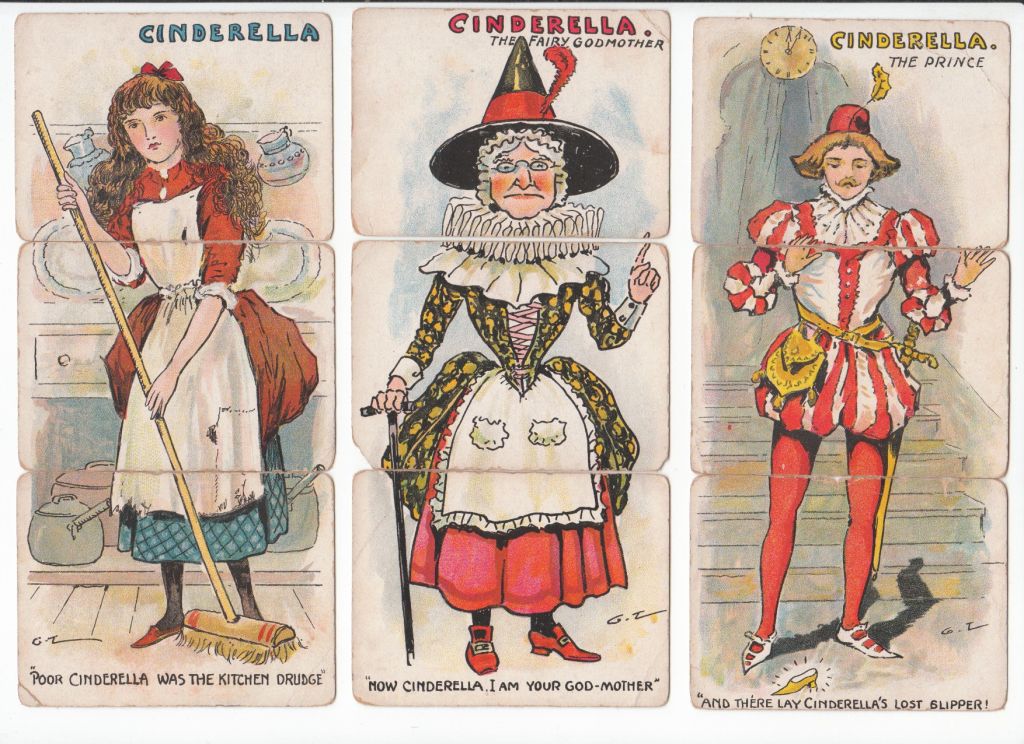 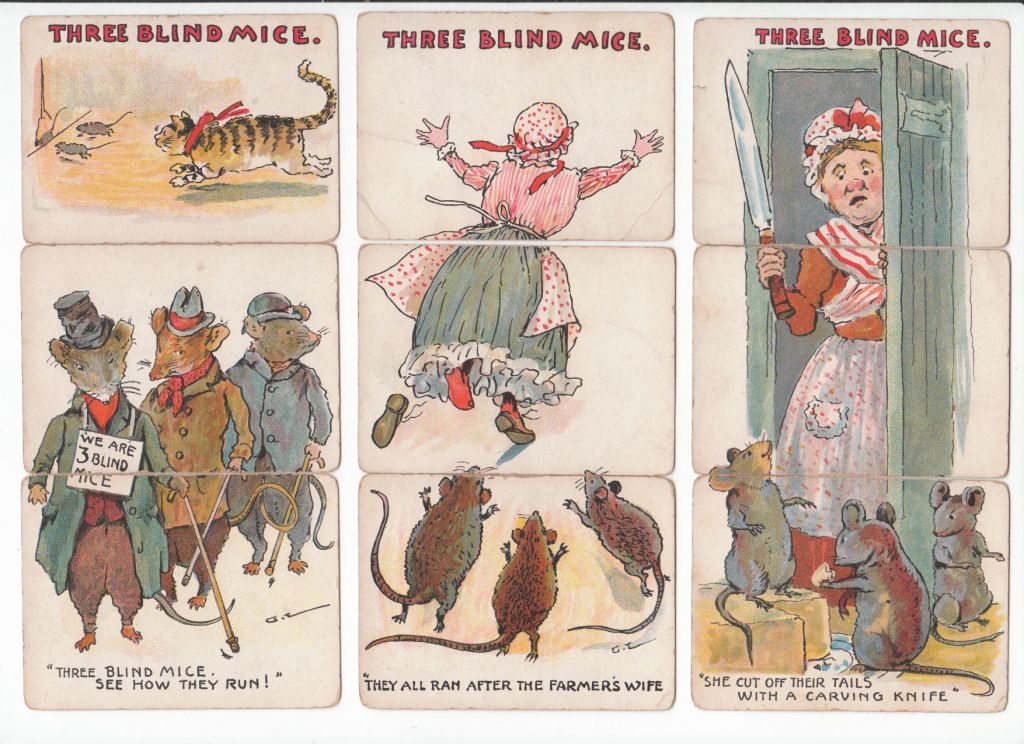 And another advertising game of Jolly Snap for Lilley & Skinner. (Date?) 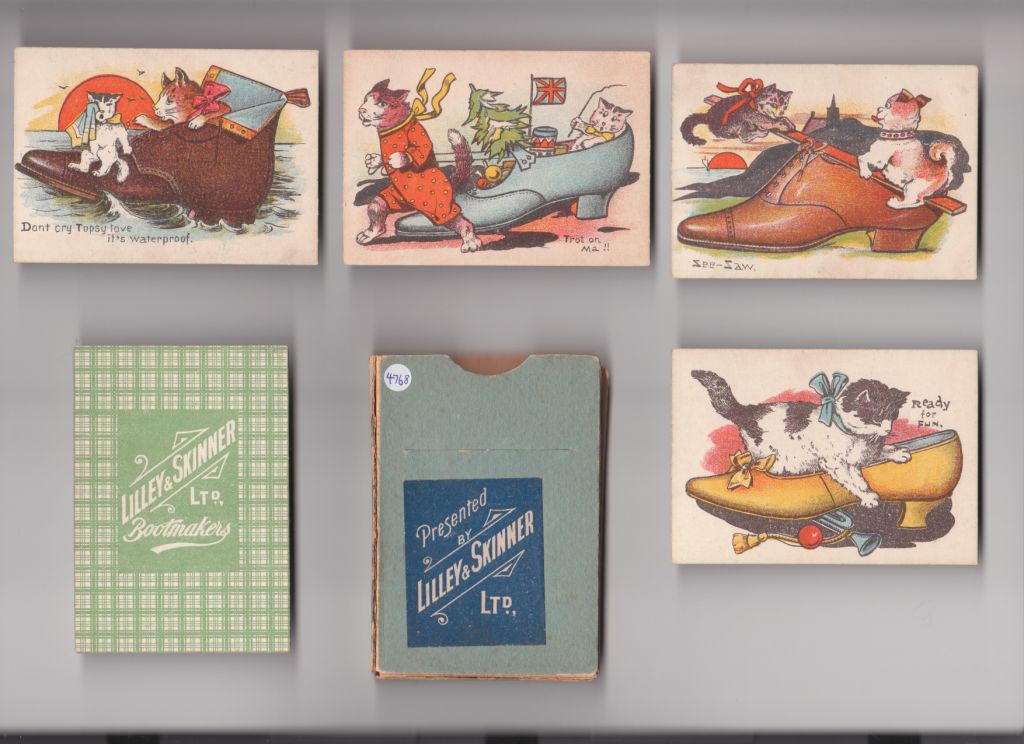 There are many quartet games of varying quality and interest. Some of the more spectacular ones date from the late 19th and early 20th century. Here is just one example: it's anonymous, but seems to be German despite the name Quatuor vocabulaire on the box. The German name comes first, then French, then English. 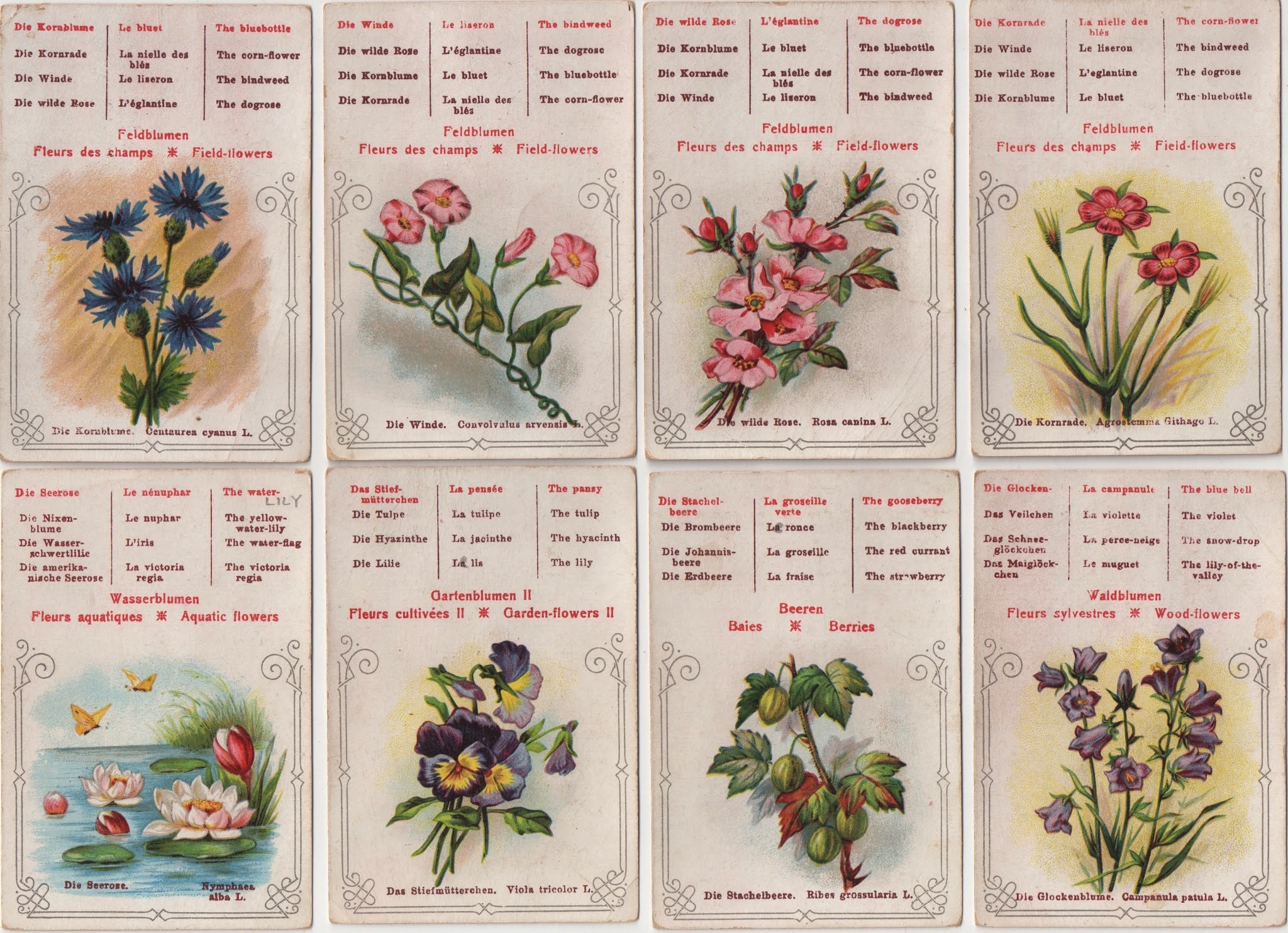 Unfortunately, the translations (into English, at least) are not all accurate. This is something I've come across on other floral quartets. Die Kornrade (agrostemma githago) is Corncockle in English (and is now pretty rare), not corn-flower. The latter is the standard name for centaurea cyanus, whereas bluebottle is a colloquial name. This flower is rare in the wild in the UK now and is largely known as a garden flower. Of course, c.1900 things were no doubt different. Finally, campanula patula (die Glockenblume) is actually Spreading bellflower, a very rare plant in England today, though the picture seems to have too many flowers on a stem. It is not a bluebell (normally spelt as one word today), which is a member of a different family, the hyacinth family. Bluebell is used for harebell in Scotland, and the latter does belong to the bellflower family, but then the illustration is wrong. But it's only a game after all, so who cares? Well, some botanists for a start, and aren't these supposed to be educational games?

Finally, some games from WWII. 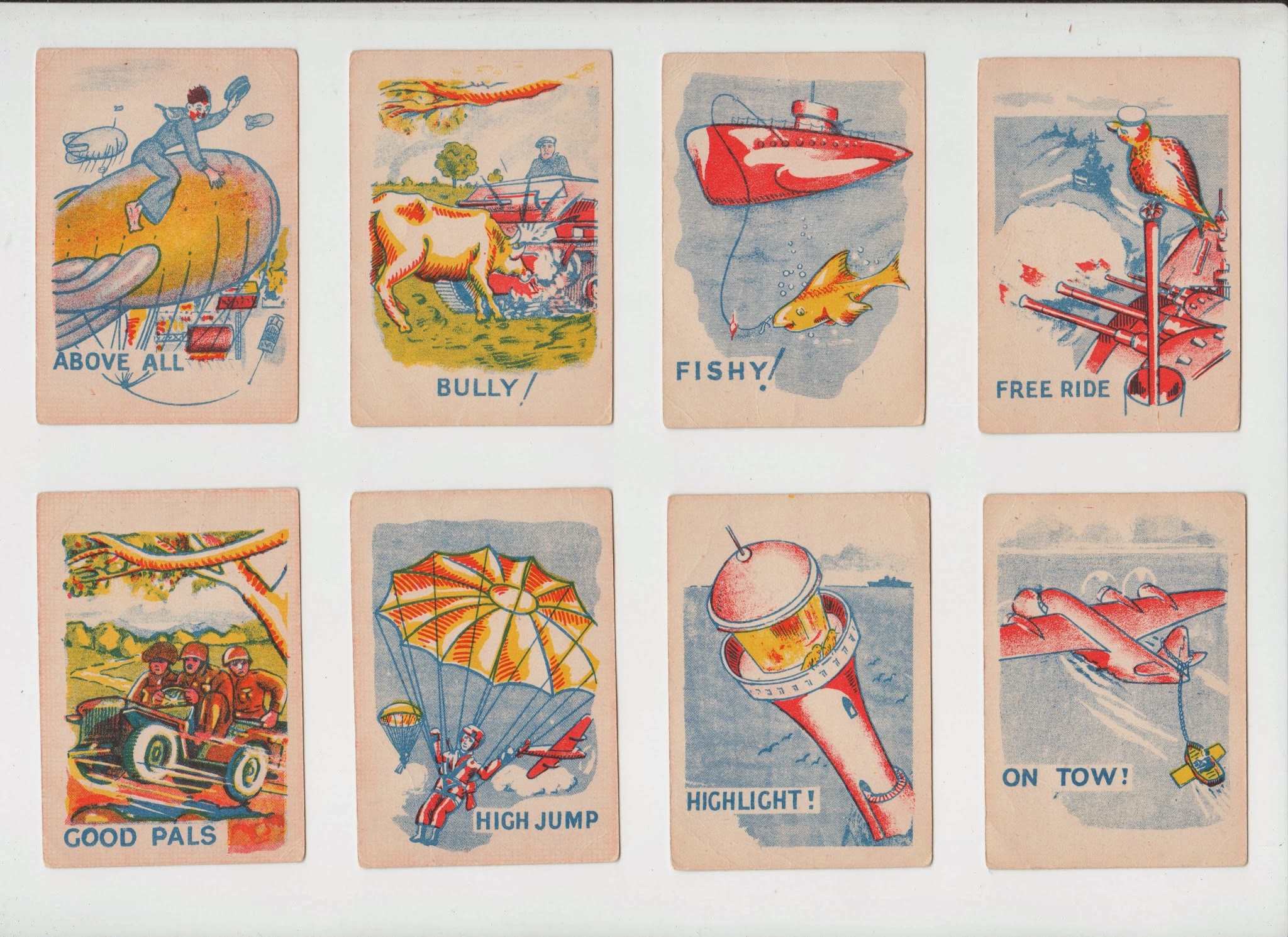 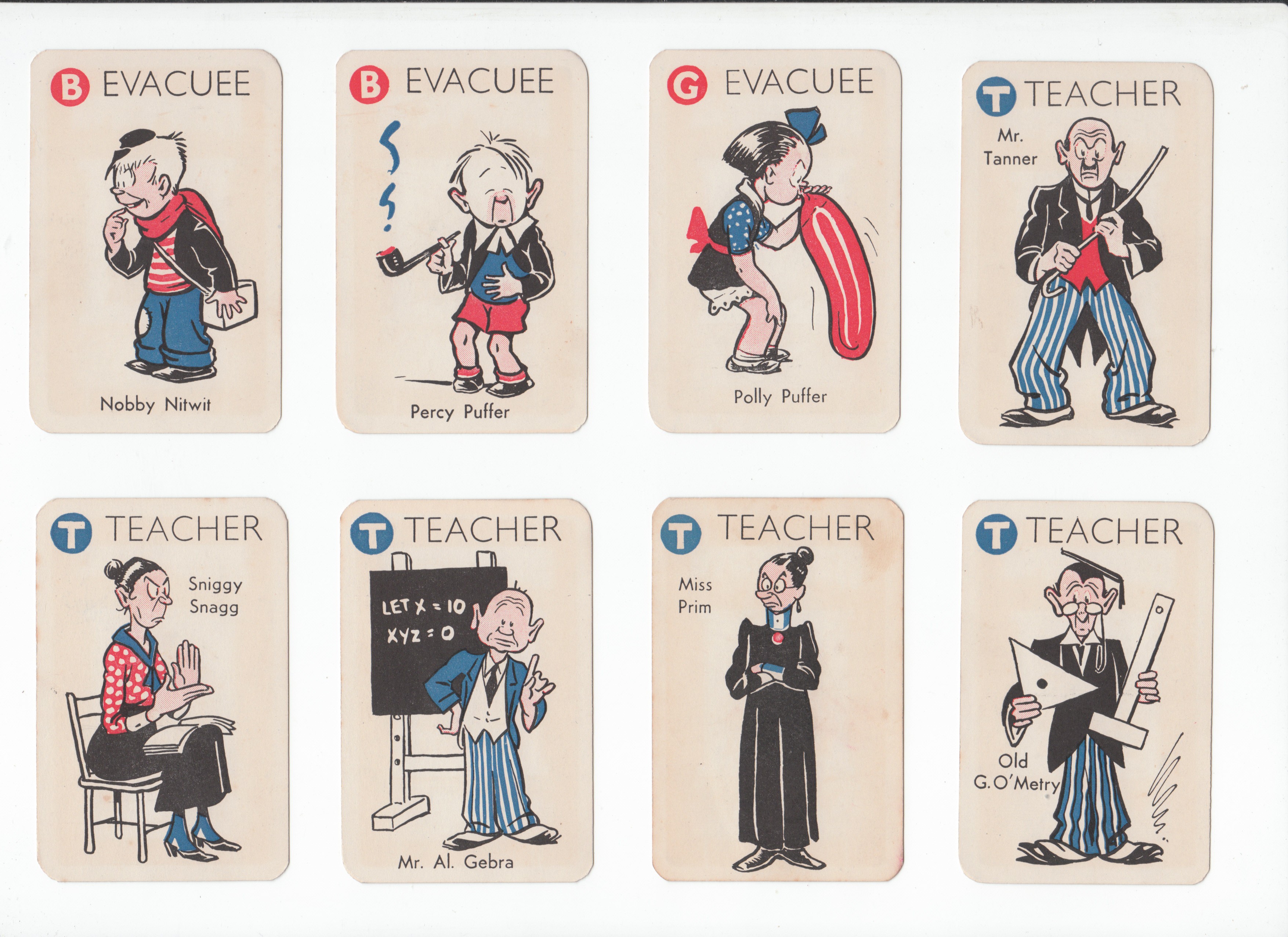 Tree Brand, Convoy (made in England) 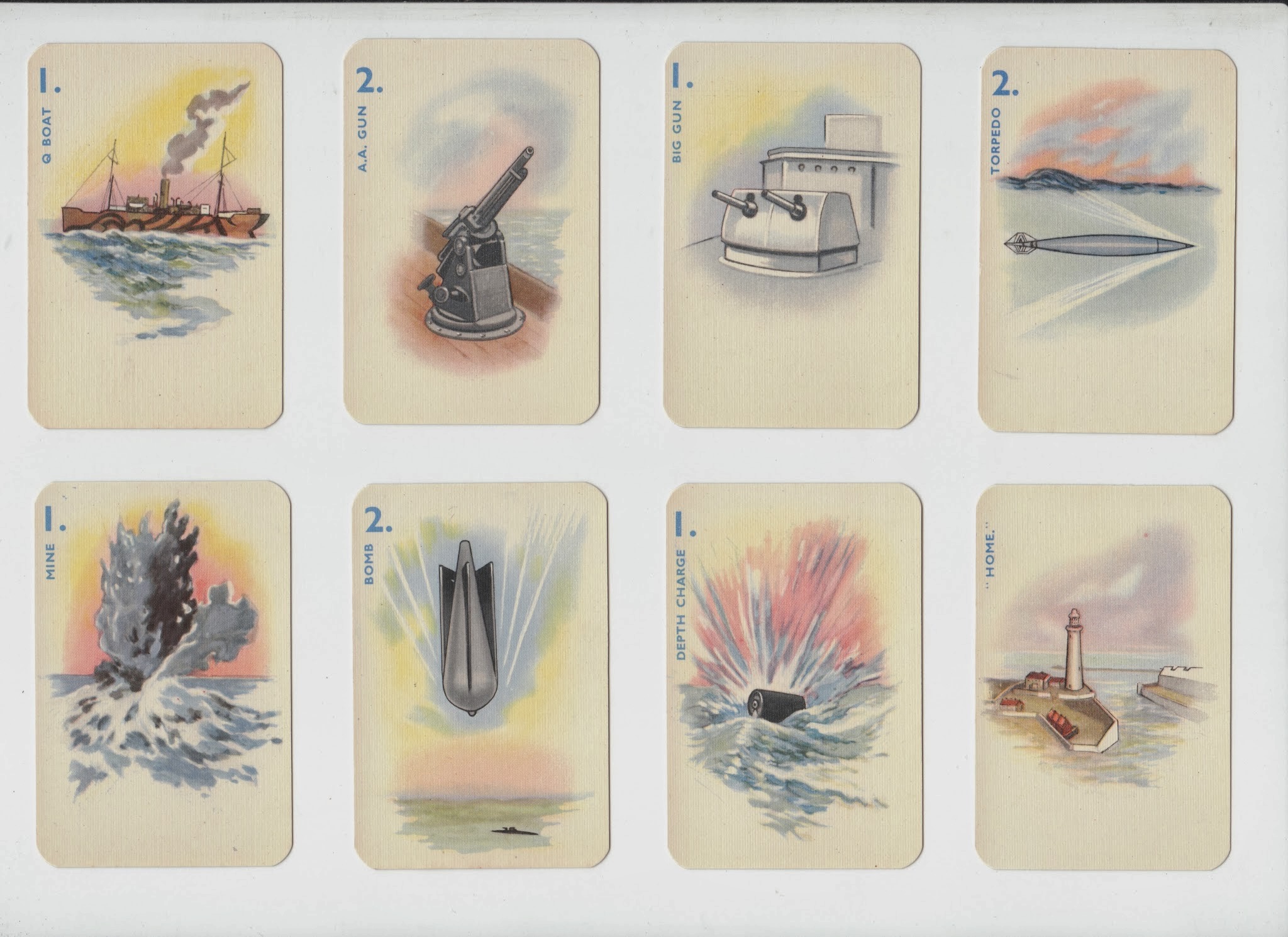 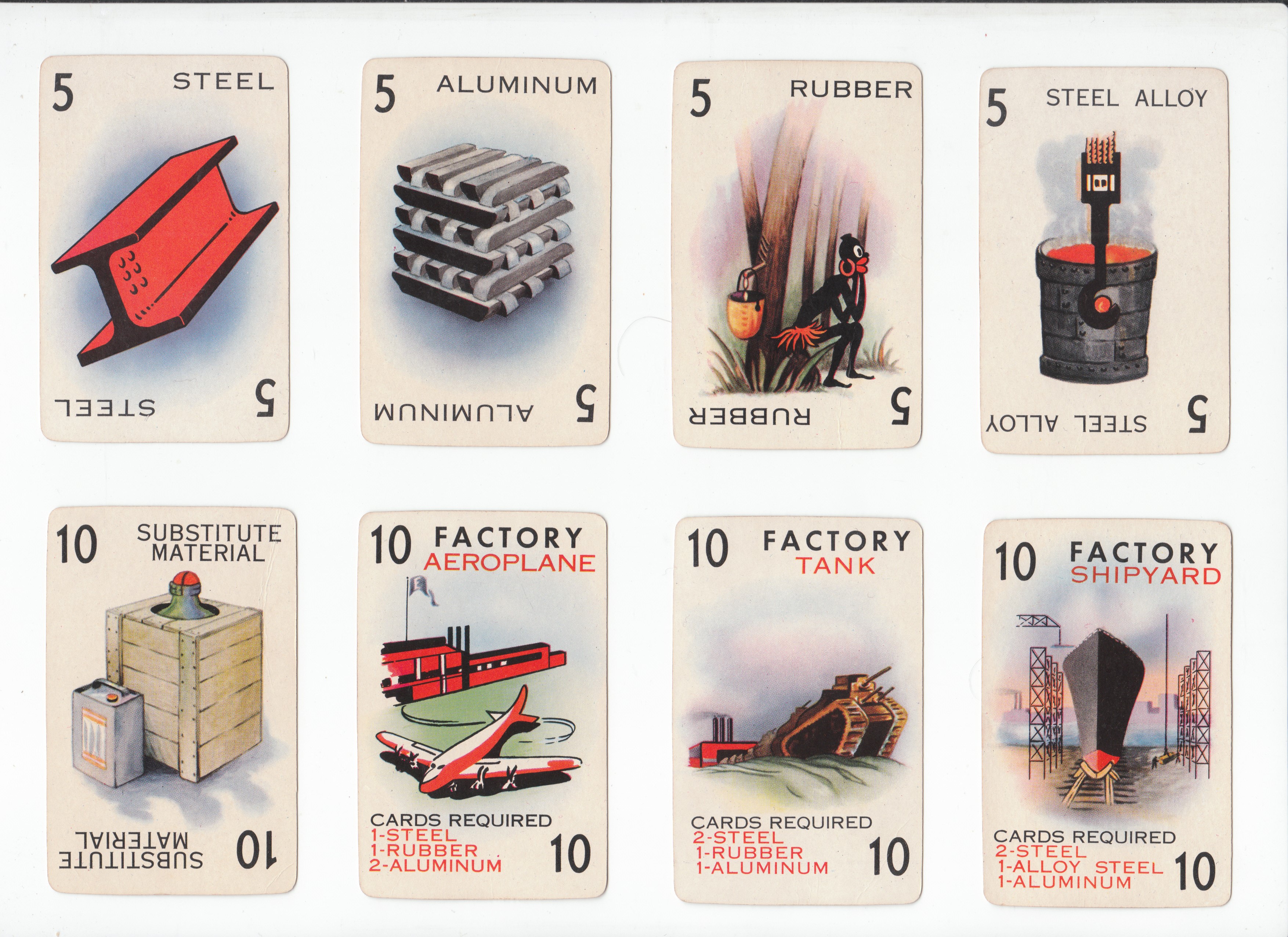 Whitman's Squadron Scramble No.1 (there are two versions with different aircraft), 1941 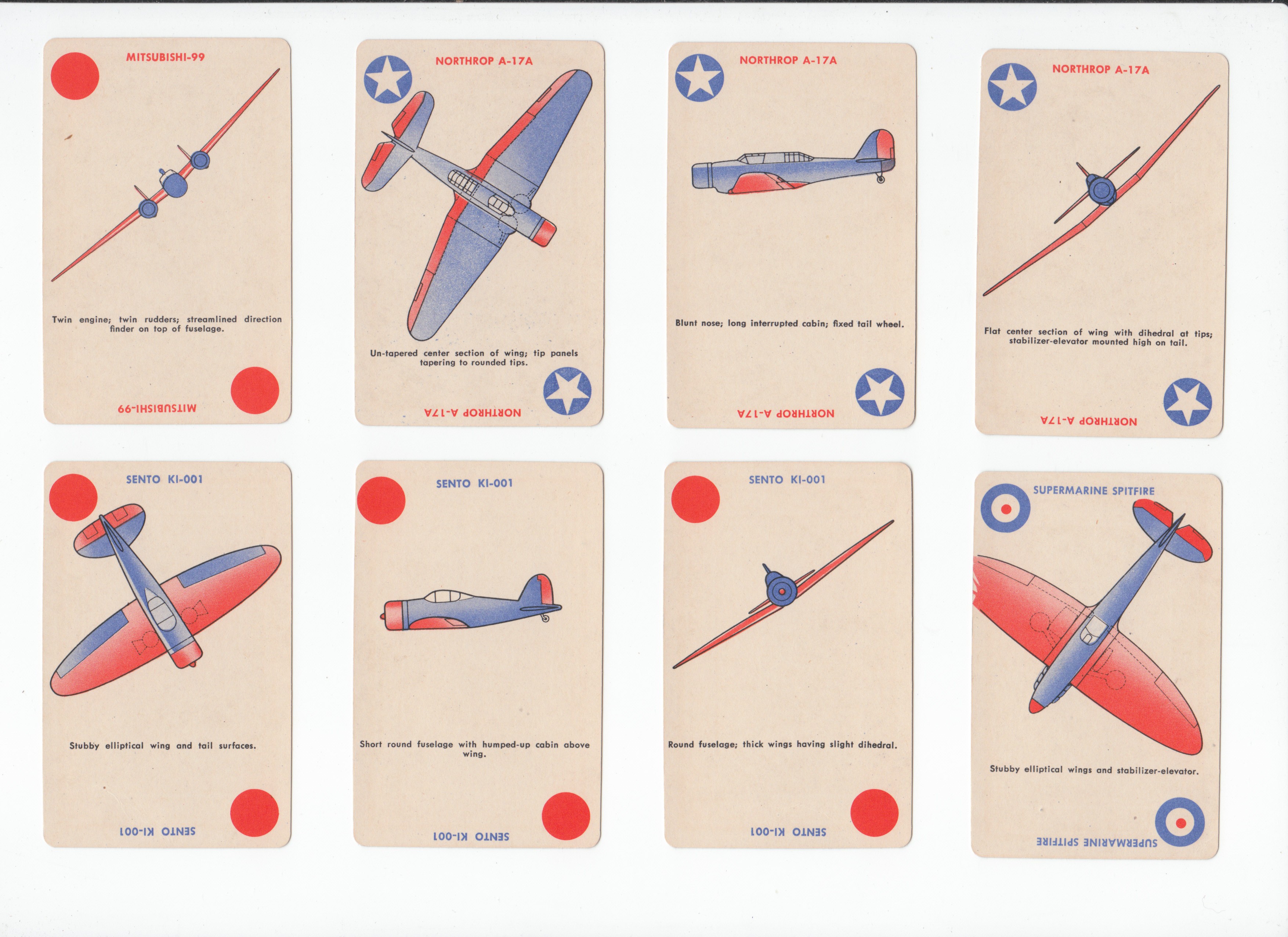 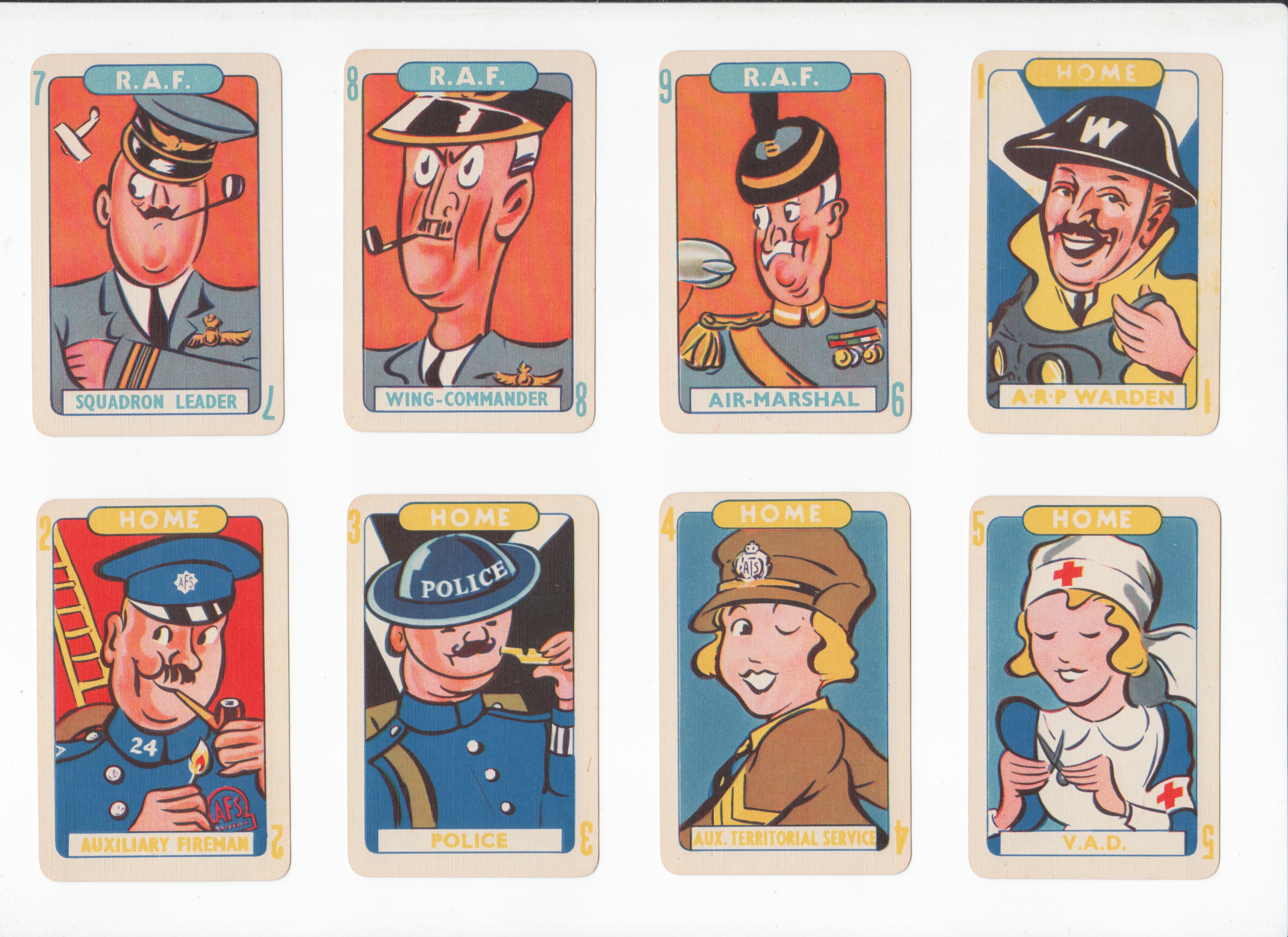 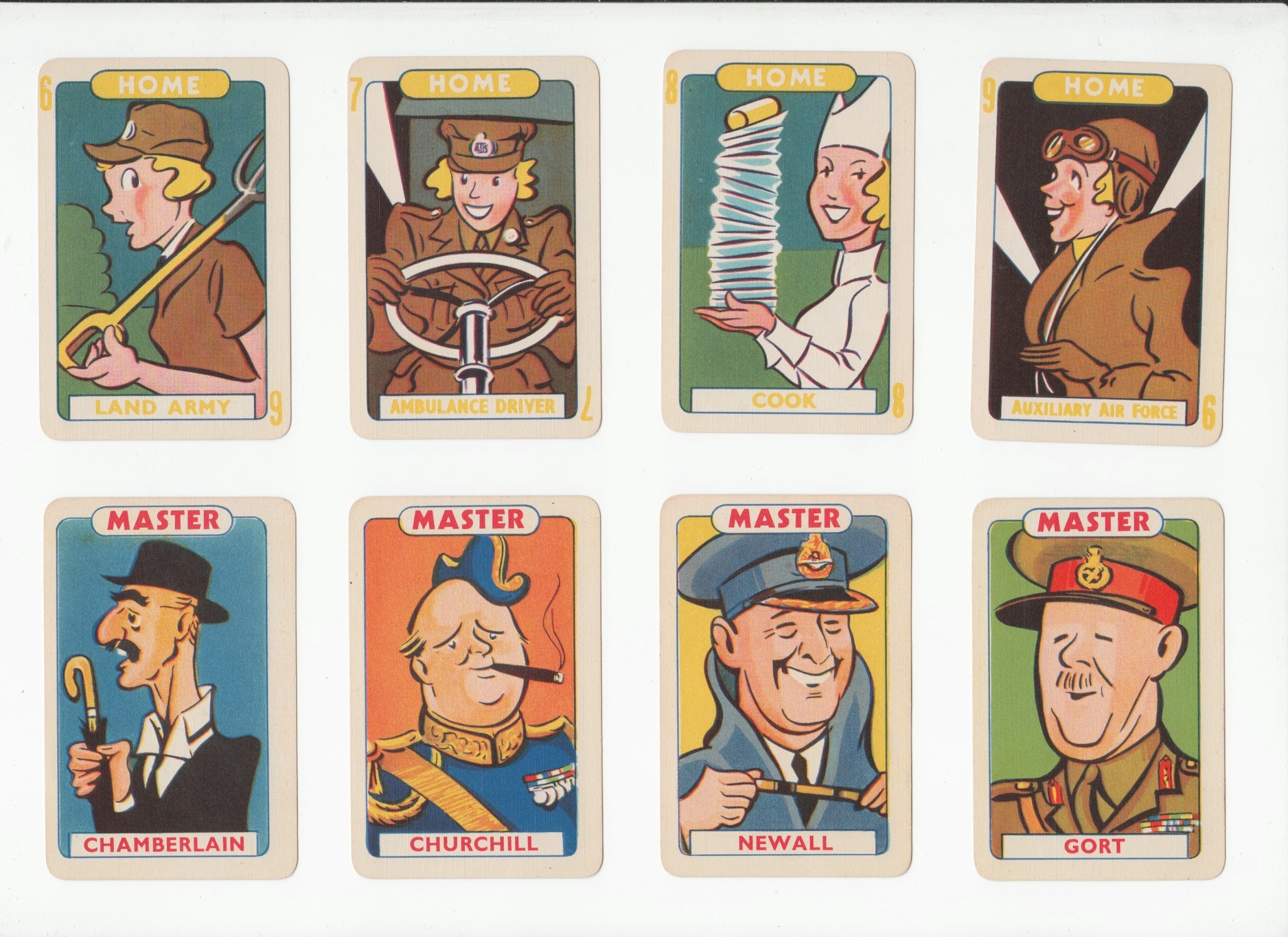 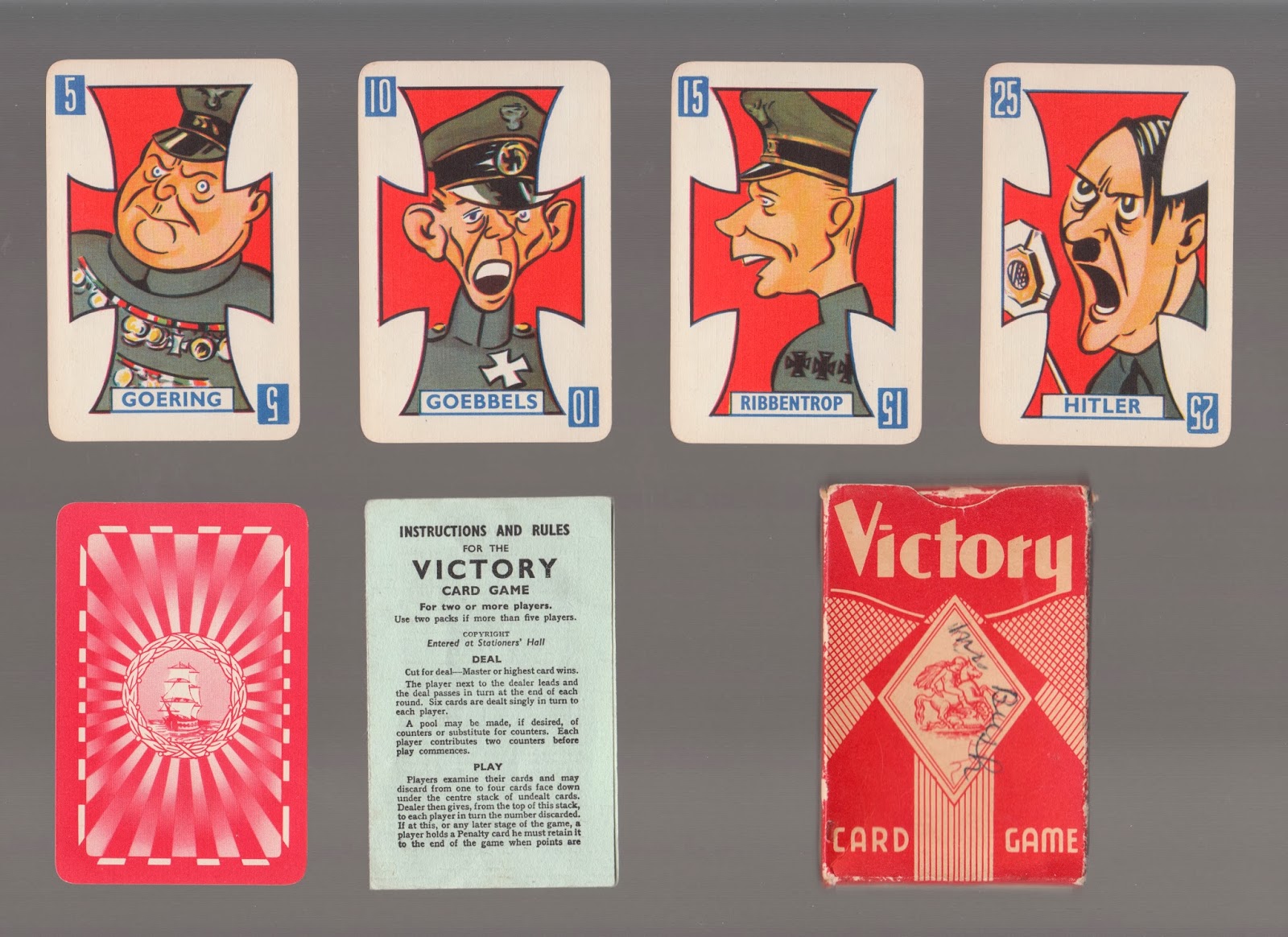 And here is an explanation of some of the characters that appear in Pepys' Victory Card Game, thanks to Rex.

After the First World War calculations suggested that enemy bombers in any future conflict would be able to inflict around 120 civilian casualties for every ton of bombs dropped. As a result of the German bombing of Guernica during the Spanish Civil War considerable adjustment had to be made to British casualty estimates. In 1938 the Air Ministry predicted that London would have 64,000 injured or dead on a weekly basis. They expected 1 million casualties in the first month of any war (in fact the government did order 1 million coffins when war was declared!). The ARP or Air Raid Precautions was responsible for the issuing of gas masks and basic fire fighting and first aid. The ARP Warden patrolled the streets nightly to ensure that no lights were showing to assist any bombers to find targets.

This service for women was formed firstly during the First World War but disbanded in 1921. Prior to the Second World War it was reformed and at the outbreak there were 300 serving in France and in fact some of the ATS telephonists were among the very last to be brought back from Dunkirk. By 1941 there were 65,000 women in the ATS. They were paid just two thirds of the pay that the men received. At the end of 1941 the National Service Act was passed which meant that all unmarried women were called up to one of the auxiliary services. Later even married women who had no children or were not pregnant were also called up.

This service was begun in 1909 at first to supply voluntary assistance mainly in hospitals. During the First World War it was extremely useful and successful. When the Second World War began the service was again expanded to cope with the extra demands on hospital services. These auxiliary nurses gave sterling service at military hospitals mainly in the UK. There were around 15,000 of them during the war and many went on to become fully qualified nurses.

In 1943 there were over 180,000 WAAFs in service and huge numbers of women were applying to join. They worked in such fields as aircraft maintenance, parachute packing, radar, plotters in operations rooms etc etc.

The Master cards Chamberlain and Churchill probably need no explanation but “Newall” was Air Chief Marshall Sir Cyril Newall. Appointed in 1937 he was responsible for ensuring that finance was available for the development of the Hurricane and Spitfire aircraft. He also resisted the push to send British bomber aircraft at the beginning of the war to France during the French collapse under the German advance. This meant that Britain still had the bomber force available which would have been lost if based in France. Newall had many political enemies and was sacked following the Battle of Britain. “Gort” was Field Marshall the Right Honourable the Viscount Gort, the commander of the British Expeditionary Force sent to France at the beginning of the war, which had to be evacuated from Dunkirk eventally.

Round the World Happy Families

Round the World Happy Families by Chiefton Products Ltd of Bristol, c.1950s.