James English was one of a number of makers who took up card-making after the duty was reduced to 3d in 1862. From 1854 he was a pasteboard maker and playing cards are first mentioned in 1865. His court design is based loosely on that of De La Rue, but interestingly he only produced courts with all twelve suit-signs on the left, a feature which doesn't appear in De La Rue's cards until 1870 at the earliest. There are two versions of the courts, the later one slightly smaller than the first, no doubt to give more room to indices, plus a patience version. At some point in the 1880s the playing card division changed its name to Peerless Card Company, after the name of the factory in which they were produced, though boxes often have James English on them and they are always listed in the directories under the latter name. They continued production until c.1904 (I still have to check the last mention in the directory). However, they were still listed as pasteboard makers in 1939. 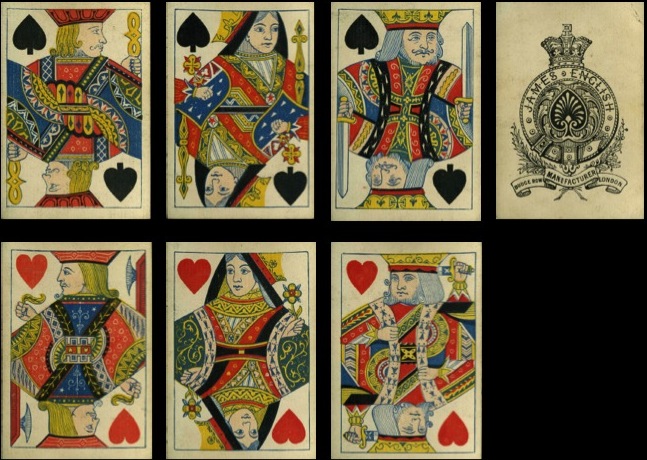 Above: E1 courts with coloured faces and the first AS, c.1865 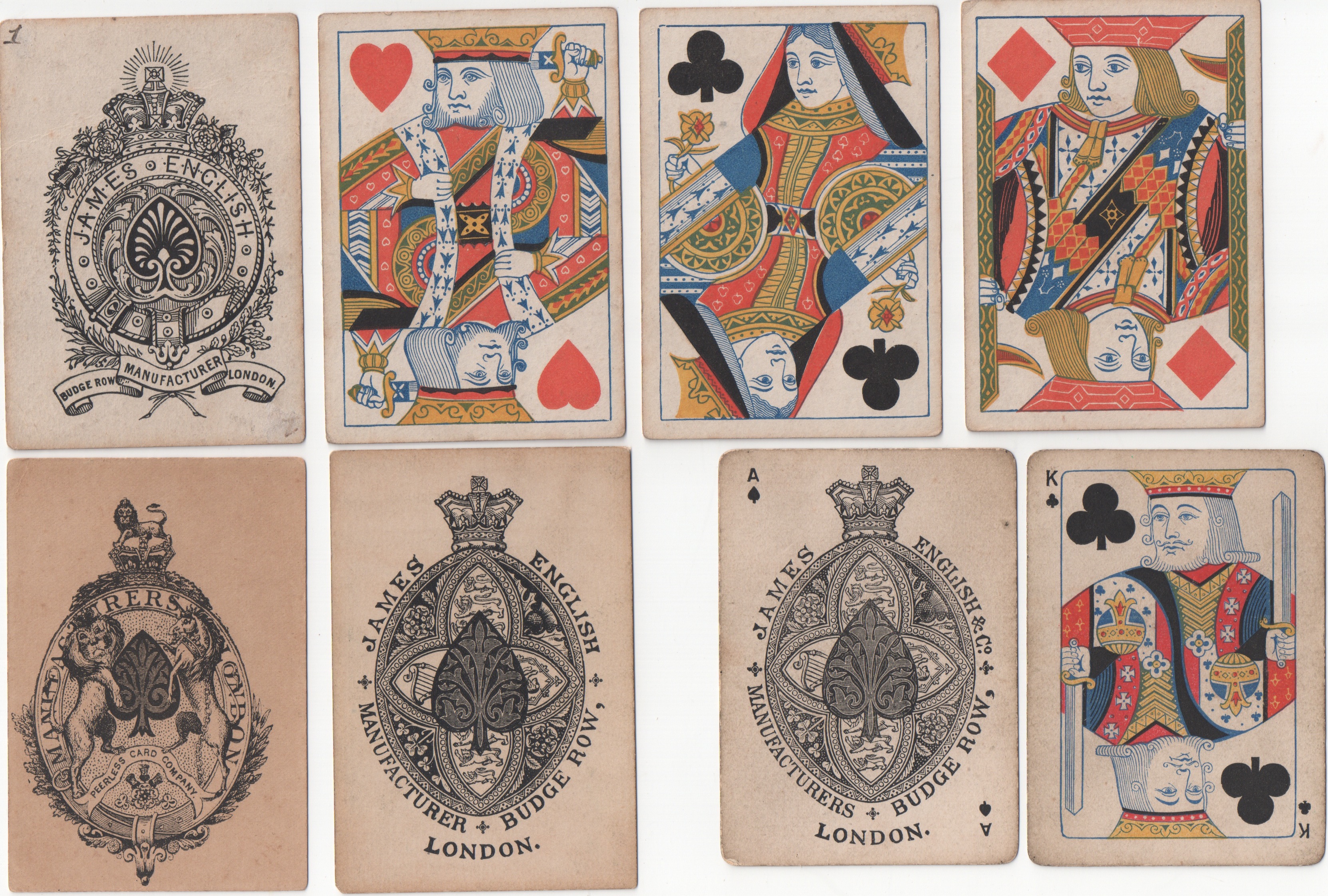 Above: top: the second AS and first courts (E1), c.1867-70; bottom: various later aces and an early indexed pack with E2 courts, c.1880. These indices were also used with E1 courts, but in the case of the court cards they were inside the frame. 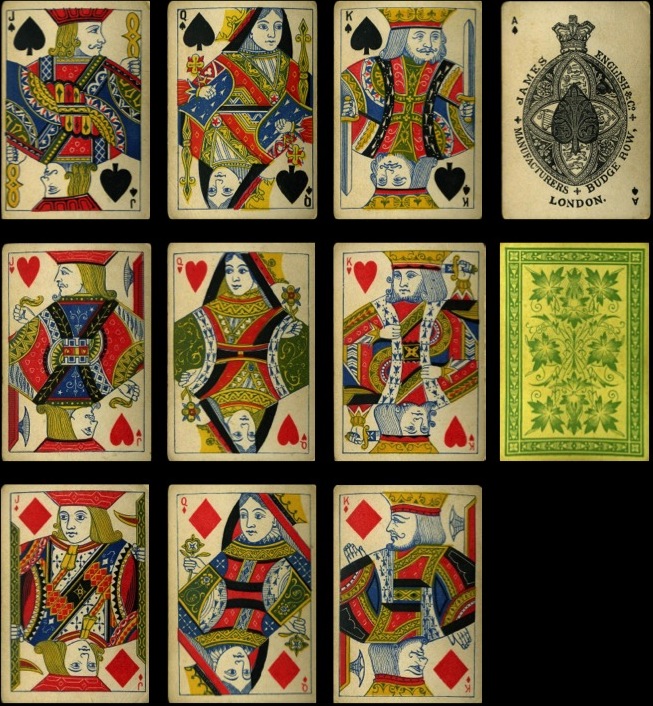 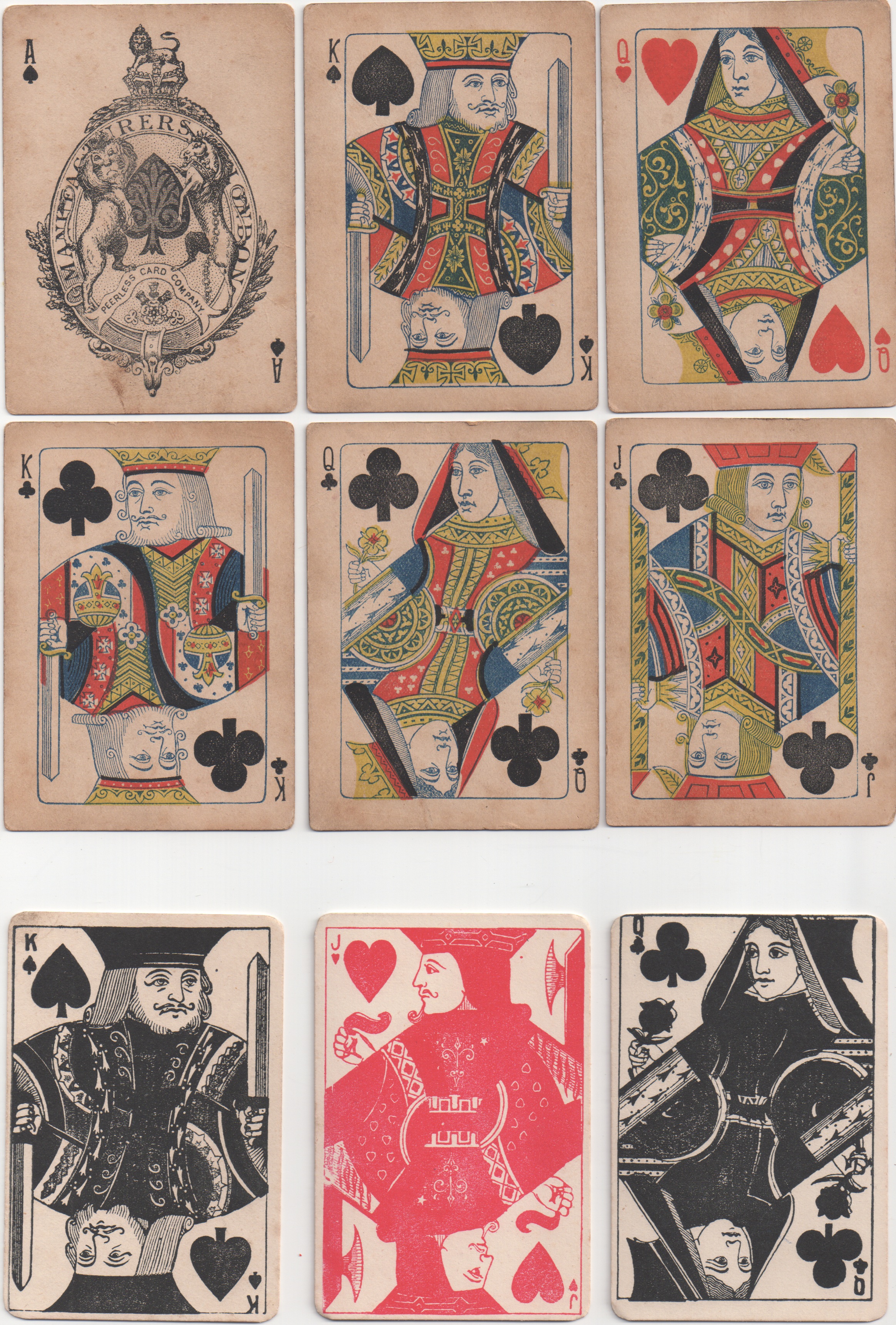 Above: top: E2 courts with Peerless AS and different indices; bottom: E1 courts in one colour only for a transparent pack published by Houdin, Paris. See also page 15 on playing card oddities► 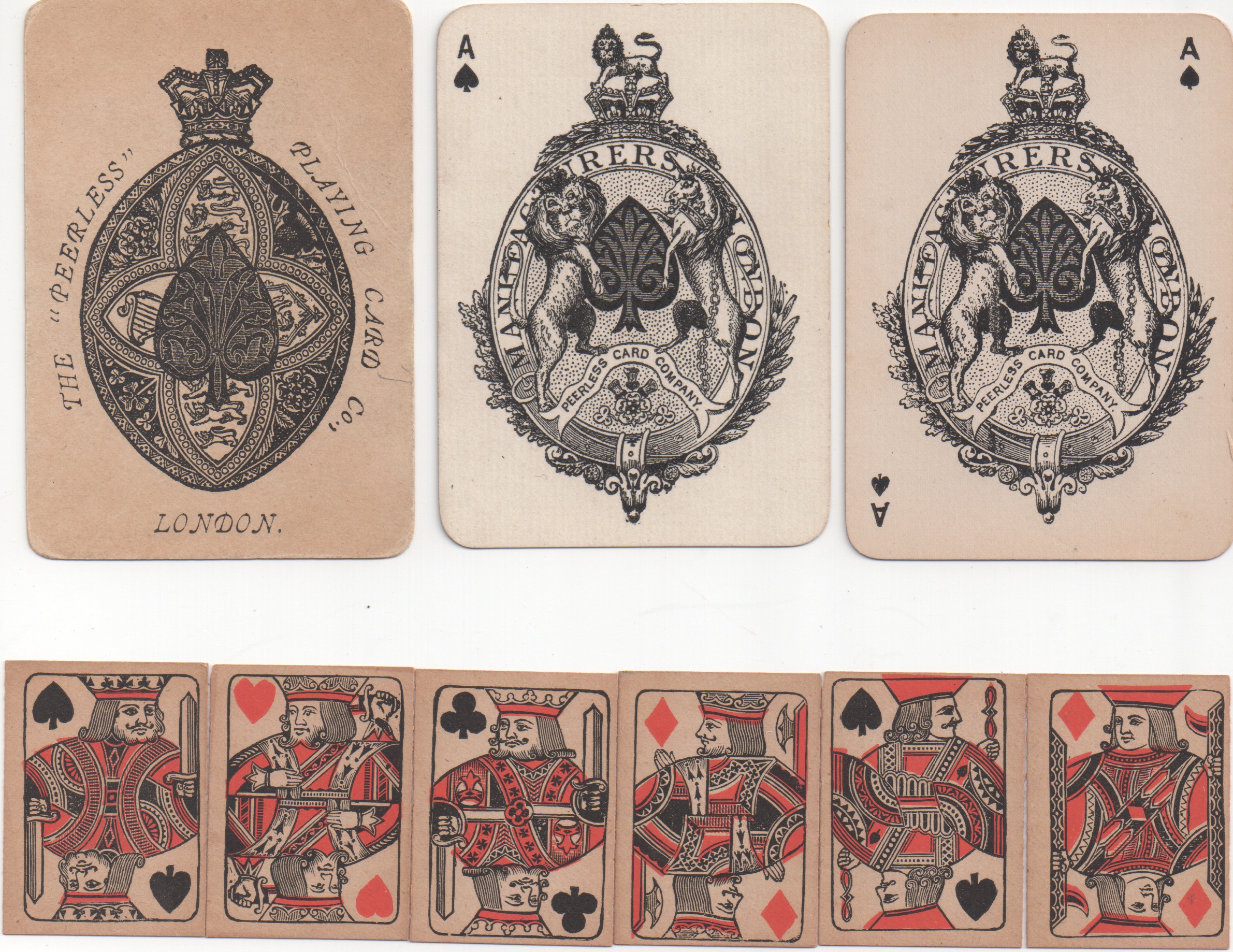 Above: top: an early Peerless AS with 'PLAYING' in the title; two examples of the rather sloppy output of some of the cards: only one index and the indices in the wrong corners; bottom: the patience version.

The sloppiness of some of the production in later years and the cheap quality of the cards can be seen in the indices. They seem to have been two separate pieces of print, unlike in most cases where the index and the pip were one piece of removable type. The commoner of the two types of index was differentiated as to the suit colour after the first use of them with indices within the court frame line. Even in the earliest packs the red numbers were often different in different packs, presumably indicating wear and tear. Note the different shapes of the numbers in the diamonds of two such packs; this is not a question of different ends, because neither end matches the other.

Then the slightly later packs with E2 courts had different numbers in the hearts and diamonds on the one hand from the spades and clubs on the other. The examples below are from the same pack.

At some point, possibly as late as the 1890s, a slender type of index was used, similar to that of Goodall's from the same decade.

These number cards are from the same pack as the courts illustrated above. Note the poor quality card.

Finally, in another poor quality pack (in very poor condition) the slender indices are in the red suits and the older type are in the black suits. There's no evidence that this is a mixed pack.

Like many of the makers at this time English produced a range of decorative backs, some of which were of a very high standard in the early stages of the firm's production. I give a small selection below. Although it's not listed in John Berry's book on tax wrappers and aces of spades, there is a wrapper with James English on, as shown below. 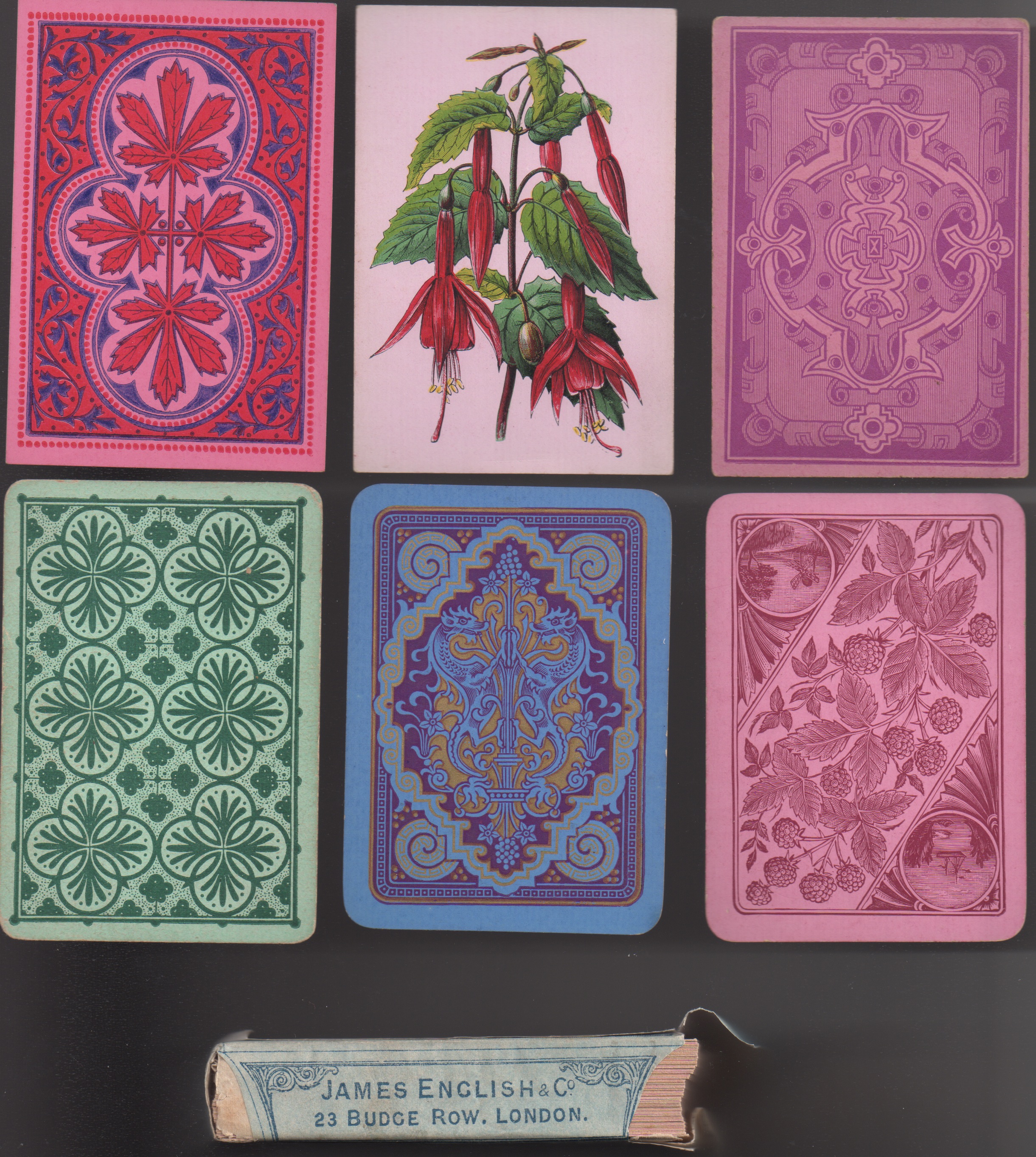 Above: decorative back designs and wrapper with address.

For the only known non-standard pack by this firm, see Peerless Playing Card Company►