In addition to the makers named in the title there are two makers who had registered aces, none of whose court cards have survived. These are: Thomas Lee, mentioned in the registration of aces 1802 and listed at 42 Fetter Lane in 1805; and John Bassil, listed in 1815 in the aces register. According to Mike Goodall in his book on the family firm, Bassil was based at 5 Lisle Street, Leicester Square, the house next door to Goodall's, who started in 1820. Whether the latter took over the former is not known. At least in the case of the other three, we have some examples of their cards to enjoy.

Henry and Sarah were husband and wife and had a son called Henry, who joined the business with his mother later; it seems that Sarah took over for a while, probably after the death of her husband. They started in 1784 at 7 Old Bailey until the business went bankrupt in 1801. The firm is still listed at Snow Hill until 1804. Their surviving cards are interesting in that the court design is not like that of any other maker, but whether they had their own block-maker is not clear. 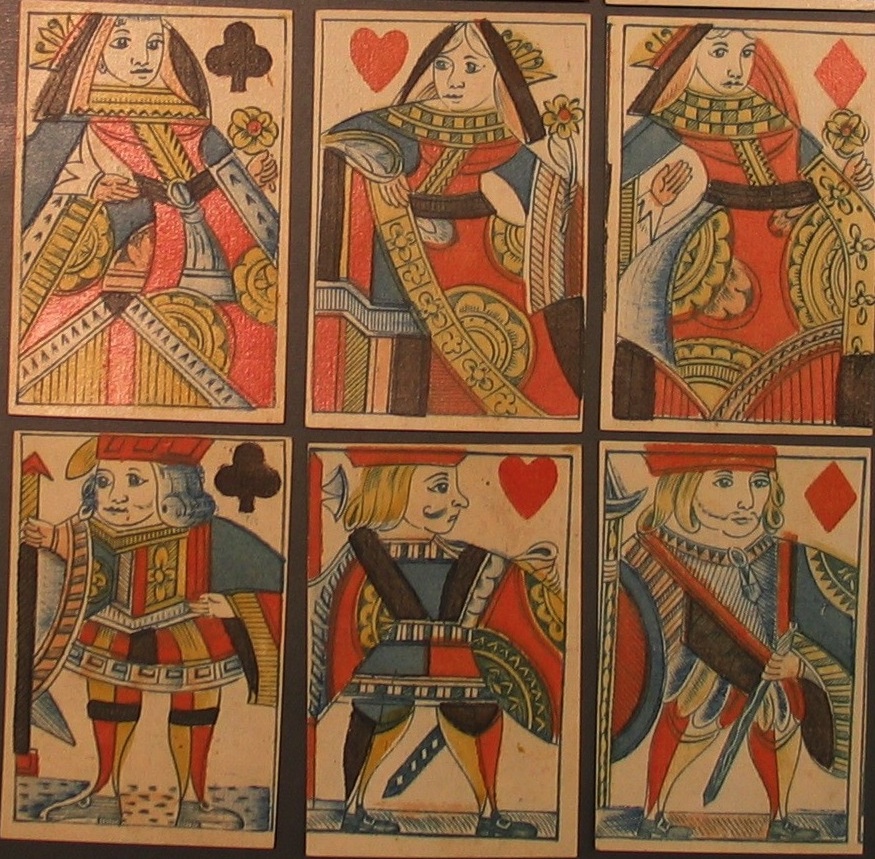 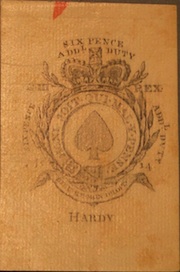 Above: Henry Hardy courts from the 1790s with an AS registered in 1800, so near the end of the life of the business.

Henry French was also short-lived; he operated from 1794 to 1805 at 11 Broad Street, Bloomsbury. His extant cards are of a standard design and have the HC mark on the KH's sword. In the known examples he used Type II courts, with various colour schemes. The JS has a flat-bottomed sleeve, the QH sometimes holds a tulip and the KD sometimes has vertical lines at the bottom of his tunic (left above his leg). Other makers who used similar blocks in this period are Hunt, Hall, Gibson and T. Wheeler. 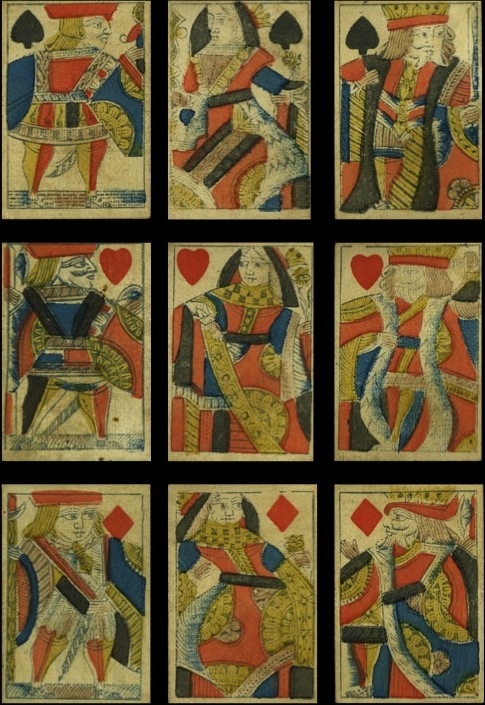 Above: another pack by French (A5 on plainbacks), no tulip, usual design above leg on KD

An even shorter-lived maker, as far as the records tell us, he operated from 1796 until 1802 at 5 Brook Street and then 14 Prince's Street, Cavendish Square. Maxted lists him at Brook Street in 1792, but he only appears sporadically in the directories of the period. The cards below are six of nine cards with a Groser AS from before 1801. Who made the cards is not clear, but see below for another pack that is complete. 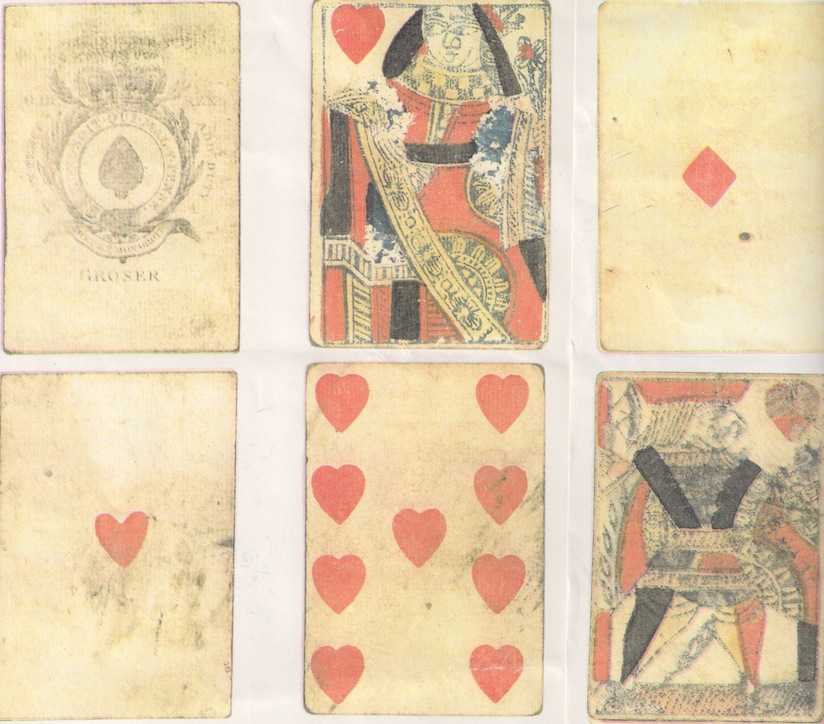 There's also another pack (below), from the Albert Field collection, with a Groser AS but, sadly, although it is complete, most of the courts are by Hunt from c.1825 (HB1 courts). The KS and the two red jacks match a Reynolds pack I have from c.1815, so none of the courts are original Groser cards. 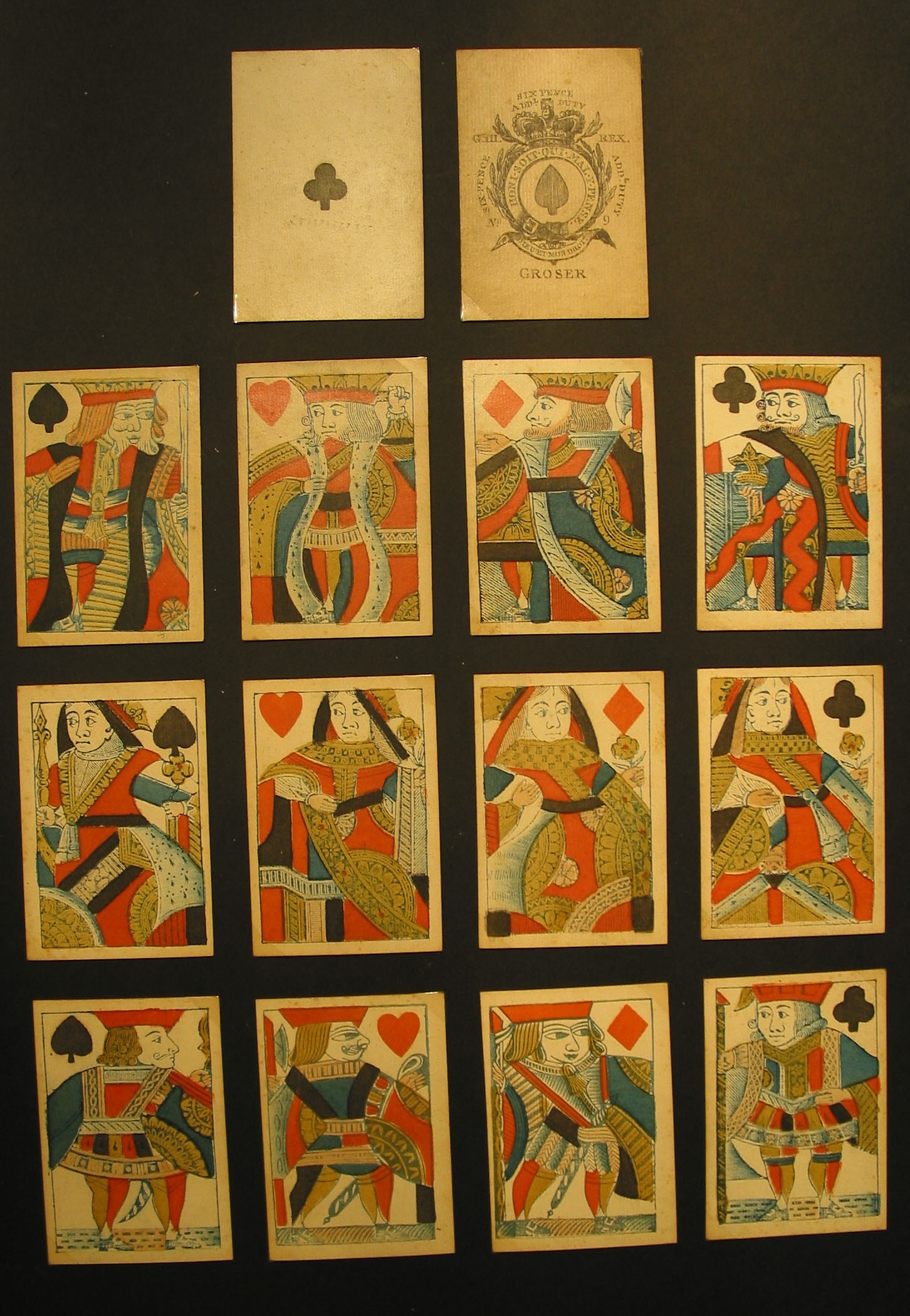 In April 2018 another complete pack with a Groser AS was auctioned in England. The courts are at least consistent in this case, but on close analysis they are almost certainly by Gibson. The colour distribution is the same as on Gibson's cards of this period, e.g. A8 on plainbacks and my 338, and some of the courts are from the same blocks as in those two packs. Does this mean that Gibson made cards for Groser, or is it yet another example of a secondhand pack with an AS added to one of Gibson's to make up the pack (or to cheat the tax collector)? It's quite likely that Gibson made cards for Groser at this date, as they were near neighbours, in the same way that later Hall and Hunt, near neighbours in Piccadilly, seem to have helped each other at times (eventually they amalgamated) and in the 1930s Universal helped Waddington, both of Leeds, by printing some of the packs for the Wills scheme. 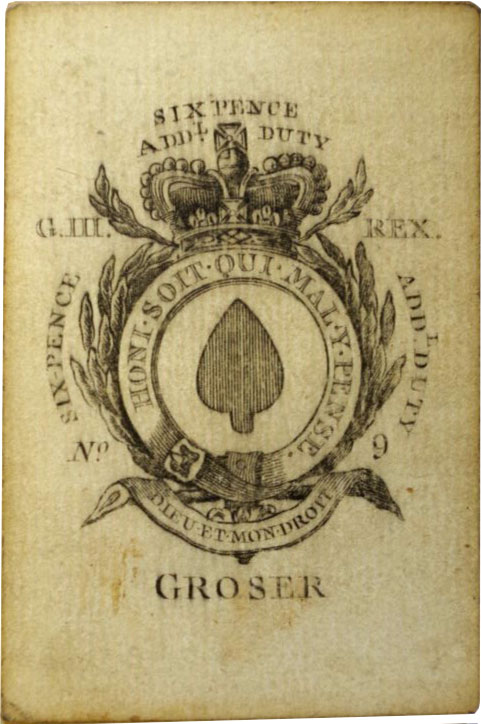 I'm most grateful to John Sings for providing good quality scans of the courts.

For comparison here are A8 and 338, both by Gibson. 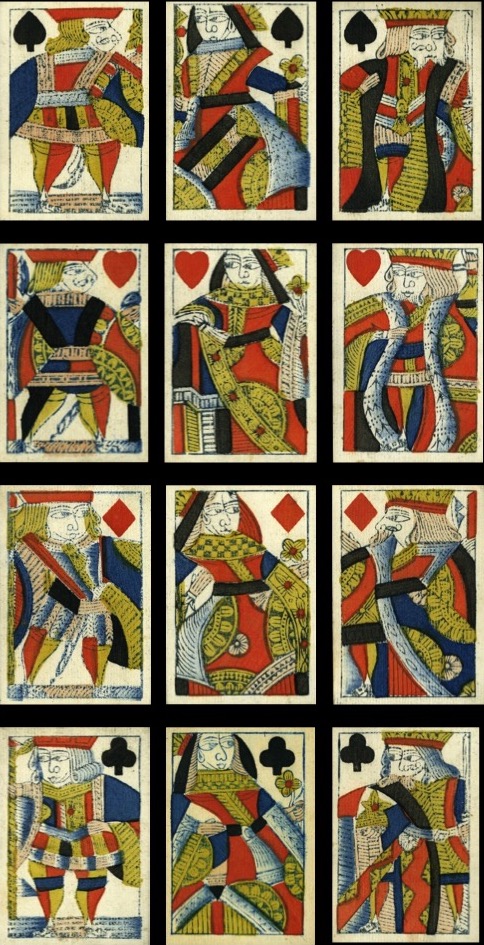 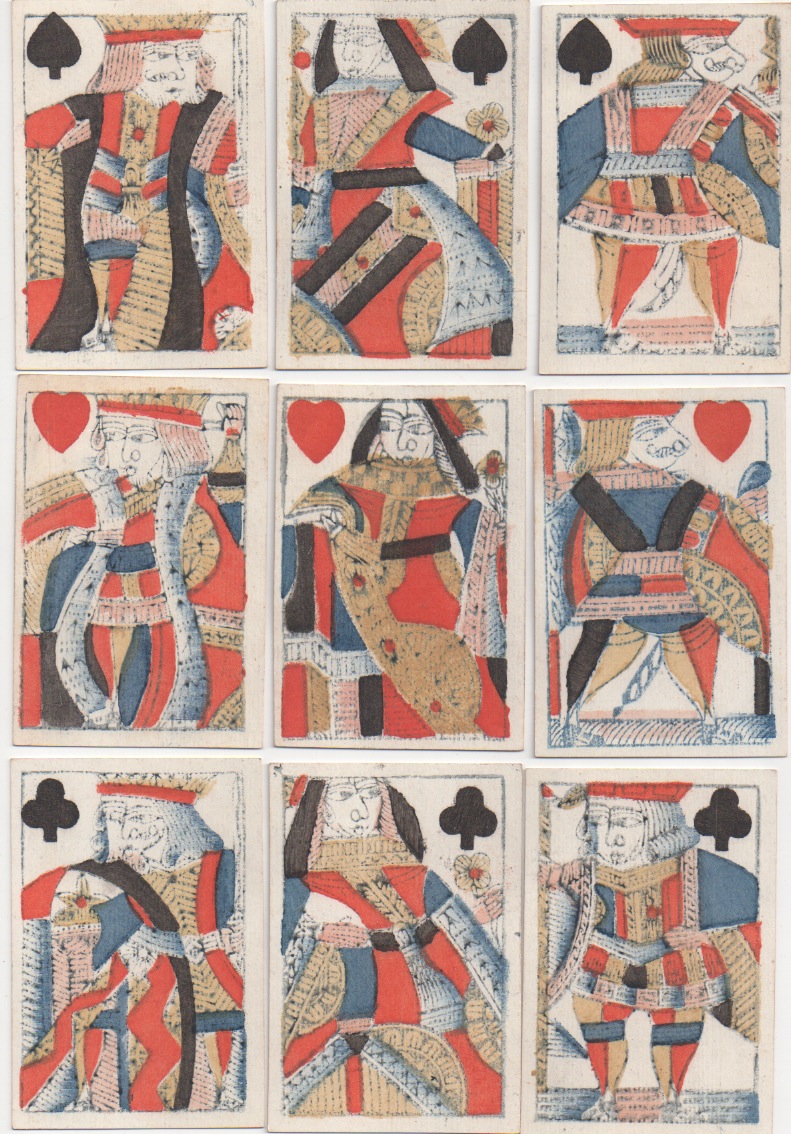 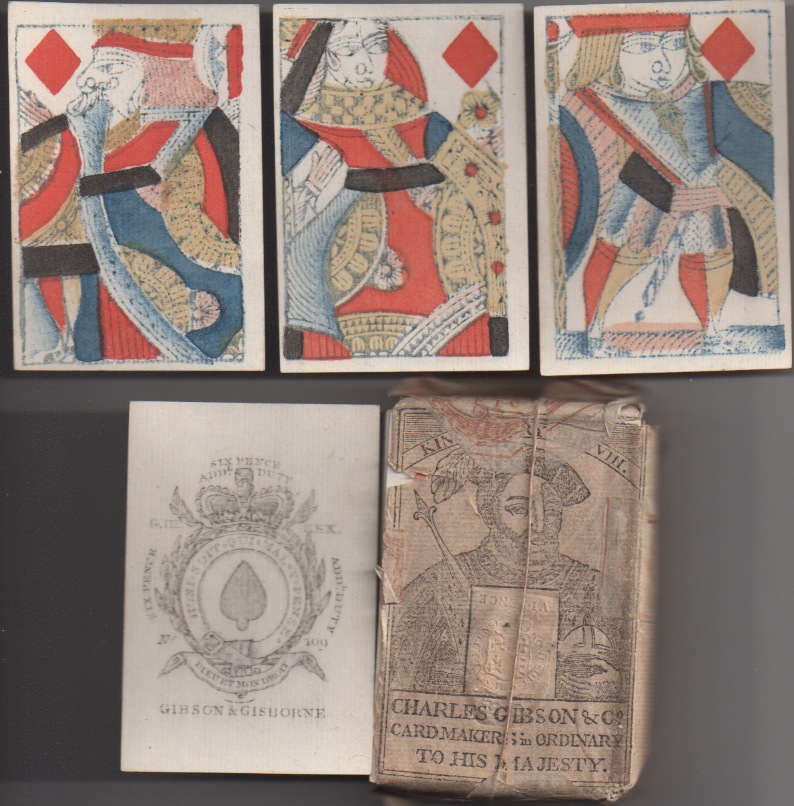