There are two ways of looking at variation: historical development through time, and contemporary variation. I have mostly looked at the former, especially in those cases where the card-maker no longer exists (all the British ones!). But I have also illustrated examples of modern variants, for example on pages 34, 35 & 40, which deal with design copies. One of the striking things about modern playing card design is the number of versions of poker and magic cards that are available, mostly from the USA. There are a lot of non-standard ones (some of which feature on other pages of wopc) as well as various versions of standard court figures, in most cases those of USPCC's poker packs (US7). Personally, I find the number of packs being produced somewhat bewildering and I have to say that the situation reminds me of the British Post Office's attempts to capture a collectors' market by issuing endless sets of pretty stamps and first-day covers. It certainly wasn't an investment caper - have you tried selling a collection of first-day covers recently? The same would apply to the commemorative coins and medals 'industry': try selling a Festival of Britain crown! Anyway, that's just my view, and if people want to collect gambling-related or magic-related artefacts, that's their business. As far as I can tell, most of the variants are printed by USPCC, though a number are produced by Legends Playing Card Co. Ltd., based in Taiwan.

First off, there are the casino packs that are usually marked or holed in some way, when they have been used once. These have standard courts, but have indices in different positions depending on the value, or the courts have been squashed to make way for a large index. Look at the overlap of some of the parts of the original design, e.g. the QS's sceptre over her headdress. Here are two examples. 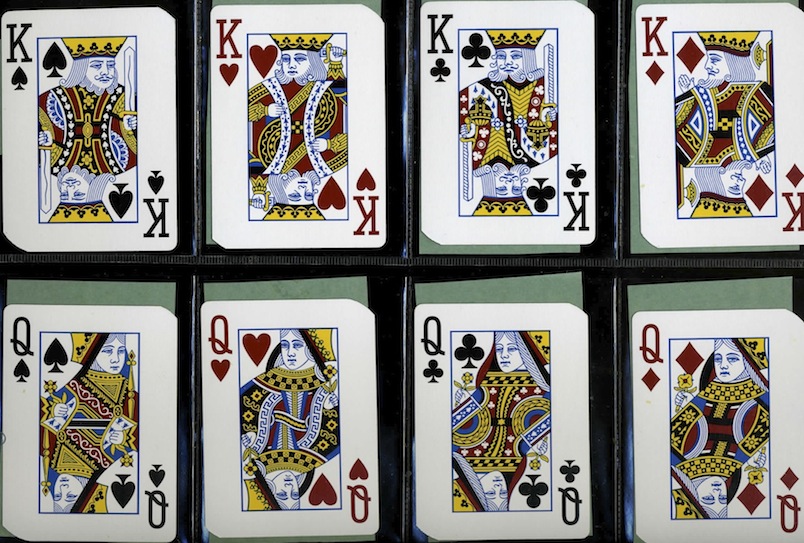 Then there are a series of Bicycle variants. Often the name seems to have little or nothing to do with the design, though the emphasis is usually on the backs.

Above: Bicycle Boardwalk, three colours only, more yellow than red on the red courts.

Above: Bicycle Dragon Back, standard AS.

Above: Madison Rounders for Ellusionist, redrawn faces except for the JD. There's another pack with all the courts redrawn.

The Crown Deck has Arrco courts though it's by USPCC. The black courts are in unusual colours.

Then there are the packs in which the courts have been completely redesigned, though are still based on US7. 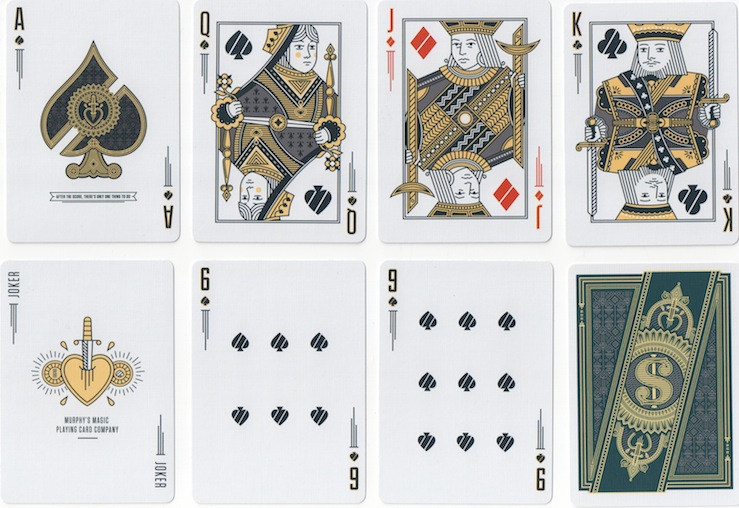 This is a pack called Run, with no indication of printer, only the publisher. 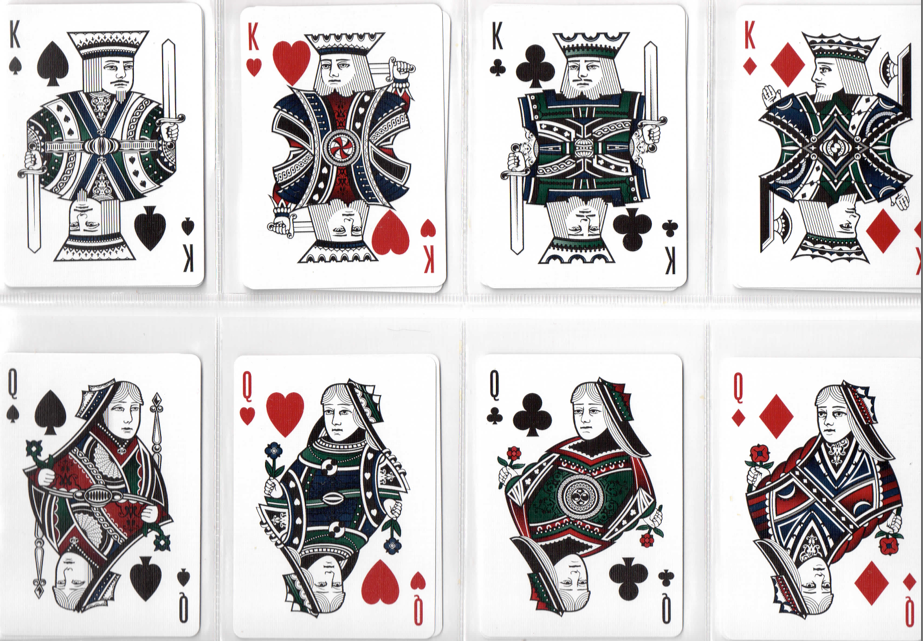 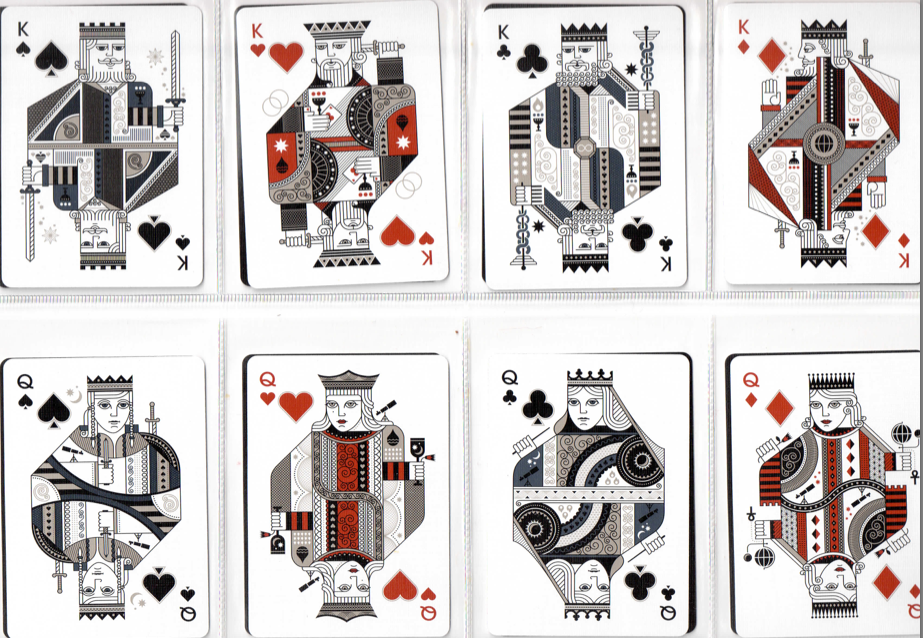 Above: Sentinels; the objects held by the figures are supposed to have some mystical significance!

The following eight packs are all produced by Legends: 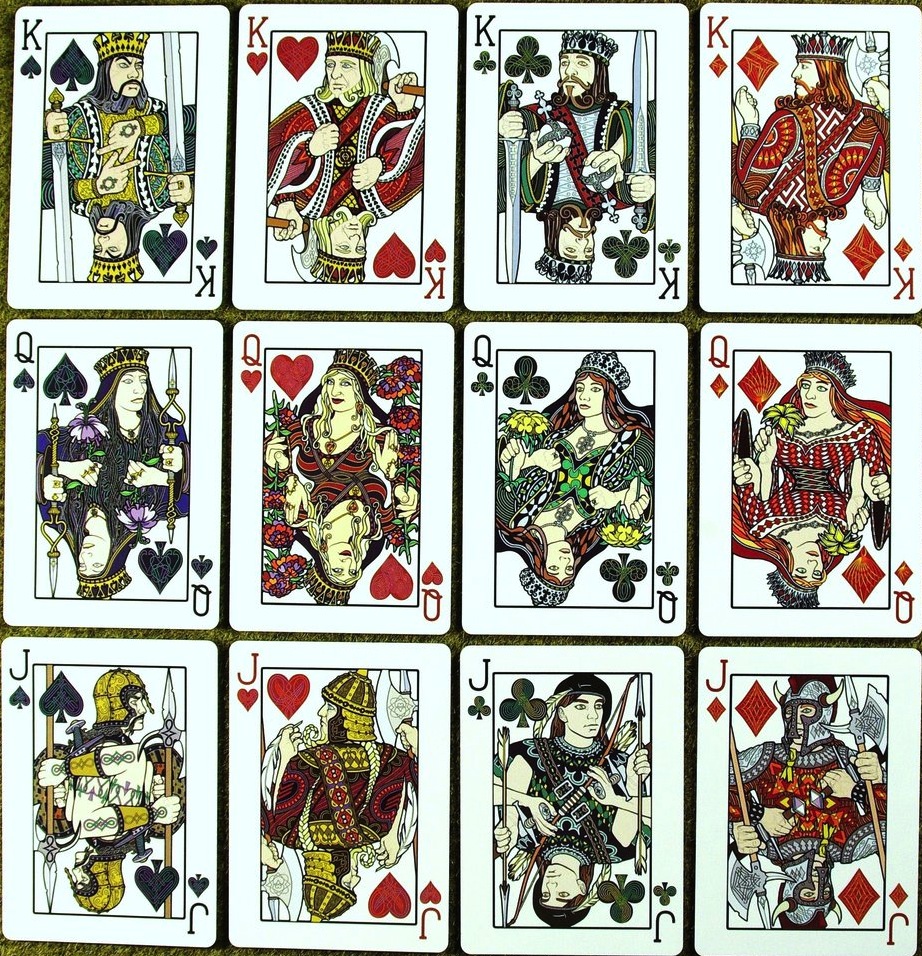 Designs by Brett A. Jones based on the standard English courts 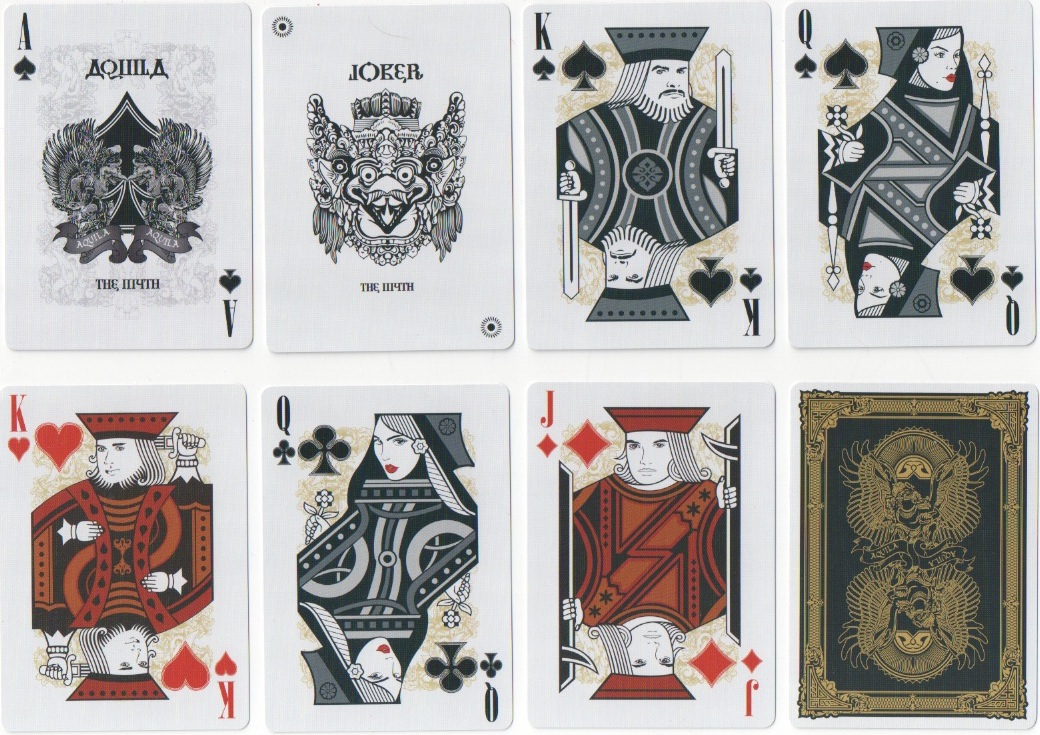 Aquila, incorporating Indonesian designs, courts based on US7 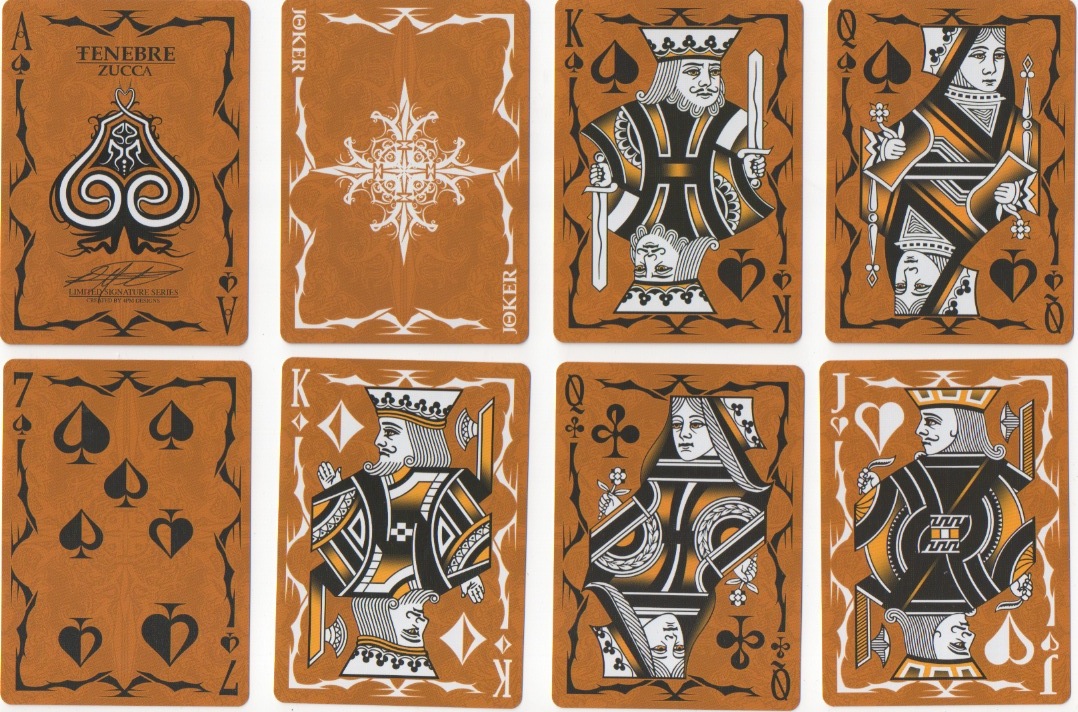 Tenebre/Zucca, with recoloured US7 courts; note the unequally shaped pips and the French pip arrangement on the 7 (also on the 6s and 8s). Tenebre means darkness, gloom.

Latitude, with Standard PCCo courts; Longitude is the same except for the jokers. 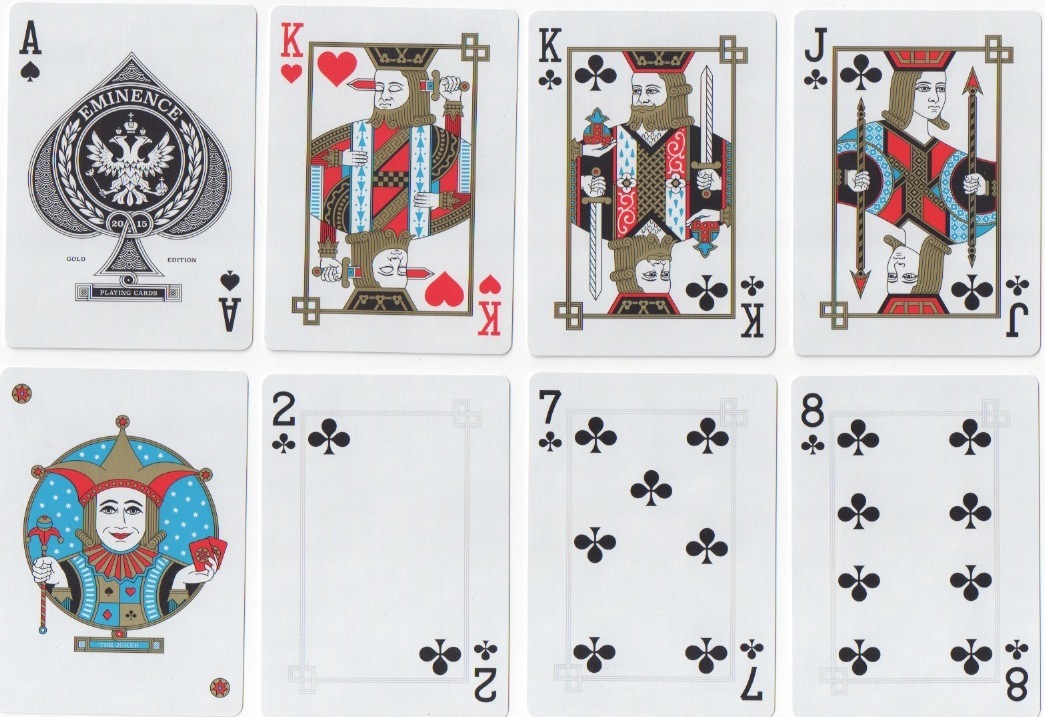 Eminence, with gold backs and redrawn courts; the sword really does go through the KH's head - no wonder his eyes are closed!; the hand orientations on the KC and JC are peculiar - they must belong to someone else. Note the diagonal 2s (and 3s) - a flashback to De La Rue's dexter indices of the late 1870s; the 7s (and 6s) have French pip arrangements and the 8s are 4/4, rather than 5/3. Eminence with silver backs has a different colour scheme on the courts.

And my favourite of all of these recent productions uses Peter Gurney's courts (see page 38); it's wonderful to see these long-forgotten designs revived in modern cards. 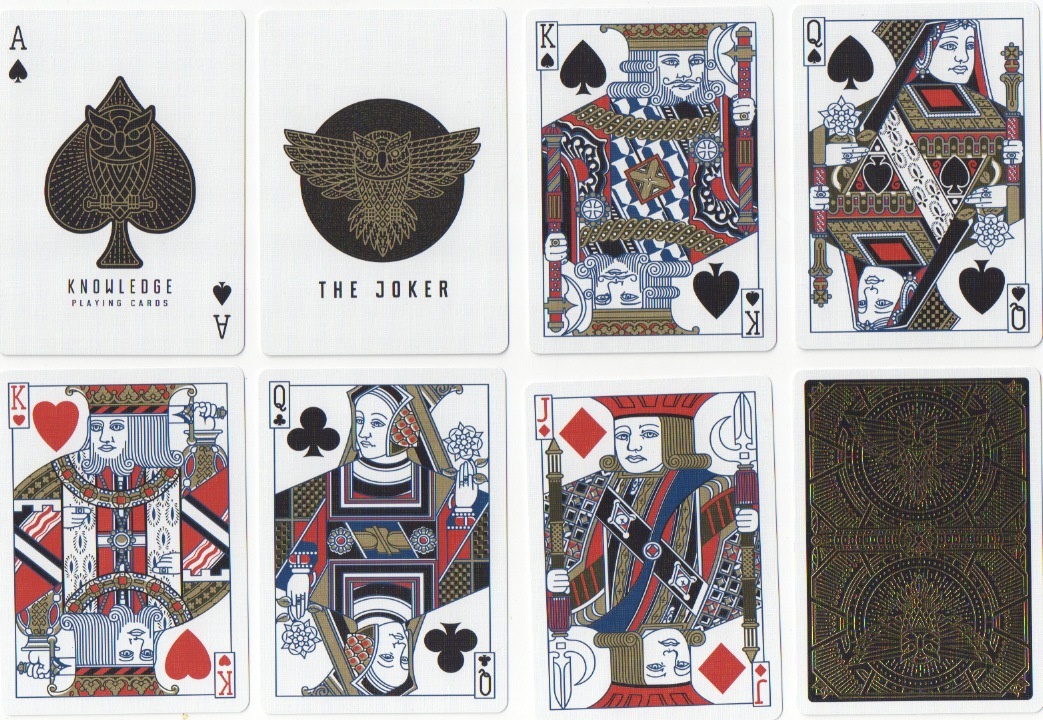 Knowledge, with an owl motif. 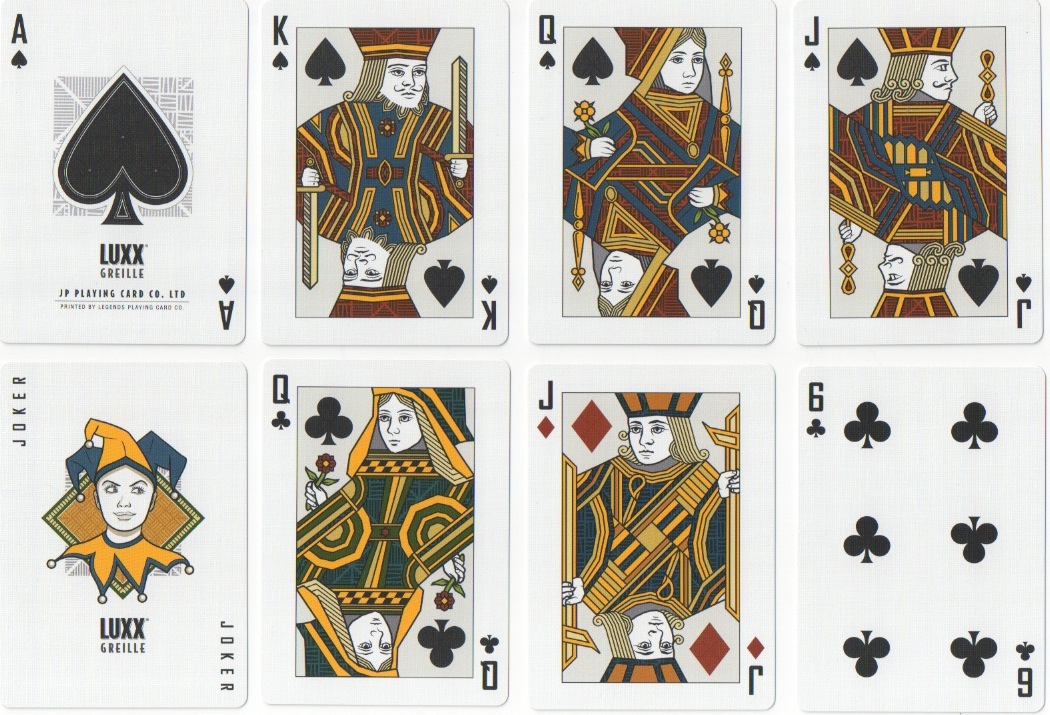 Greille by Rick Davidson; the sixes, sevens and eights are divided diagonally like French standard cards.

Another of my favourites is the set designed by Rick Davidson, who went back to the original single-figured Rouen pattern and made a modern version of it called Origins► There are now two more to add to the Origins series. Shadows is a revision of the original designs in more traditional colours including a dull purple found in some early examples; Rouen 1567 is a revival of the original Pierre Maréchal courts, retaining the single figures and adding the missing red jacks by using later known examples as models. An extra card adds a reproduction of the original QH from the sheet. 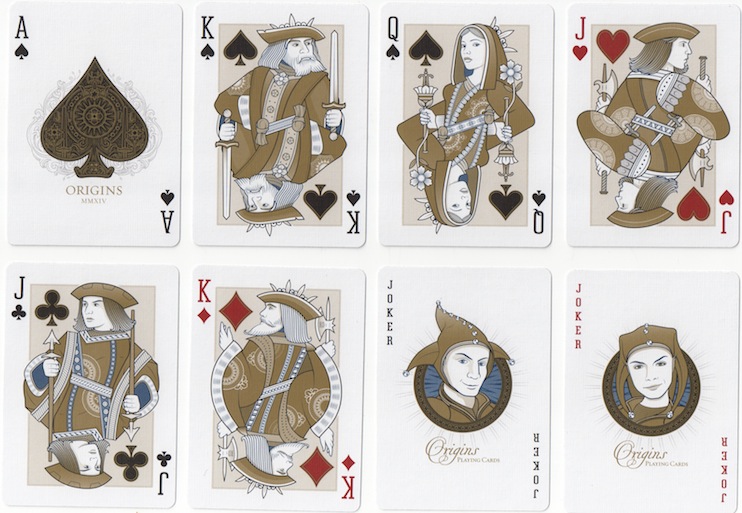 Origins, as it appeared in 2014 with gold and the figures breaking the frame line. 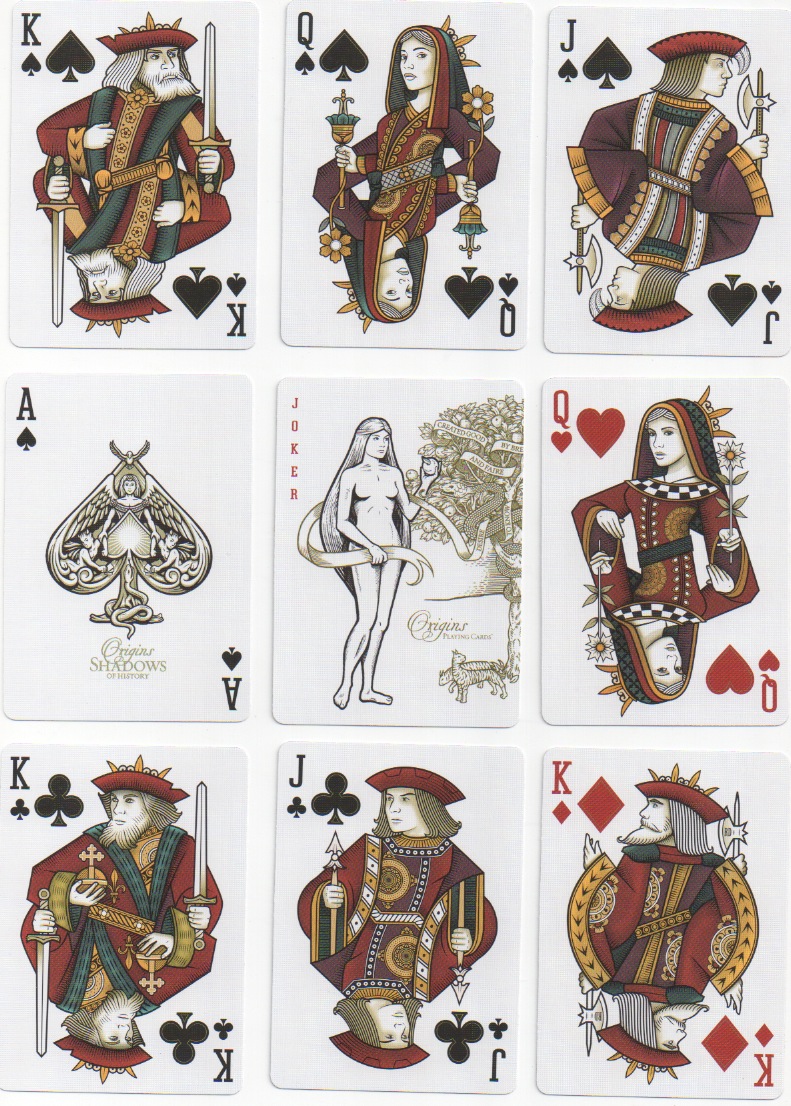 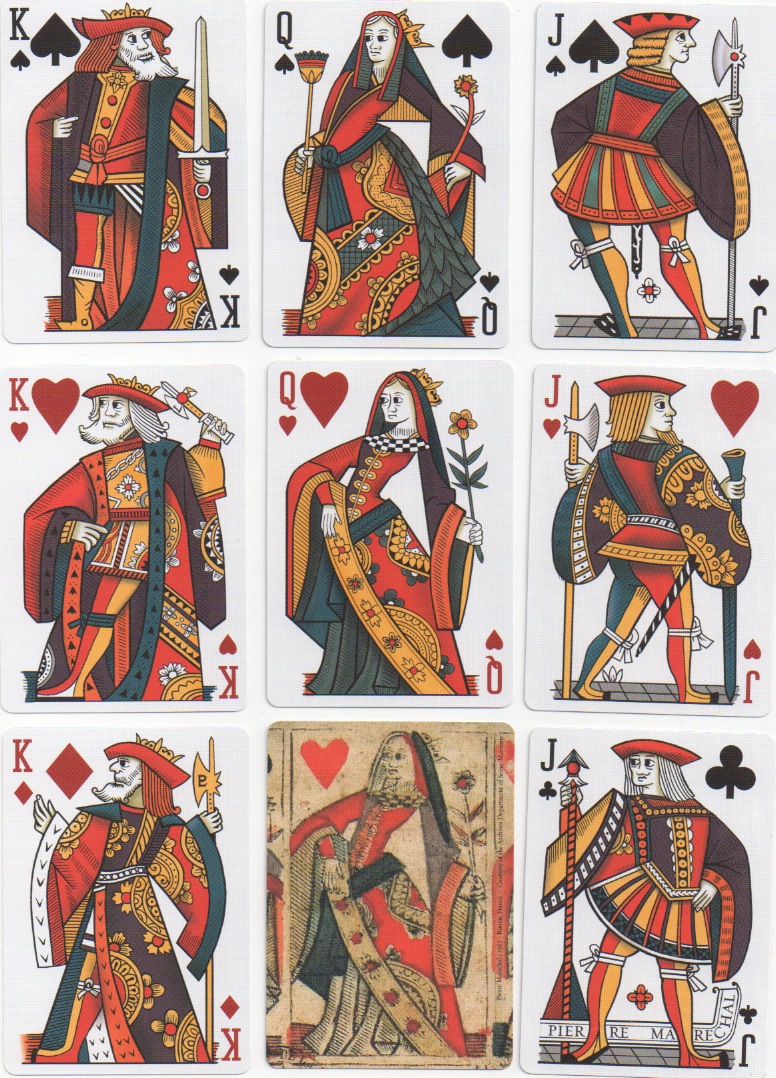 Carta Mundi have also joined in this market with a non-standard pack for Calavera tequila. The suit-signs have been turned into faceted jewels, but in the process the hearts and the diamonds have ended up looking rather similar - not a happy outcome. 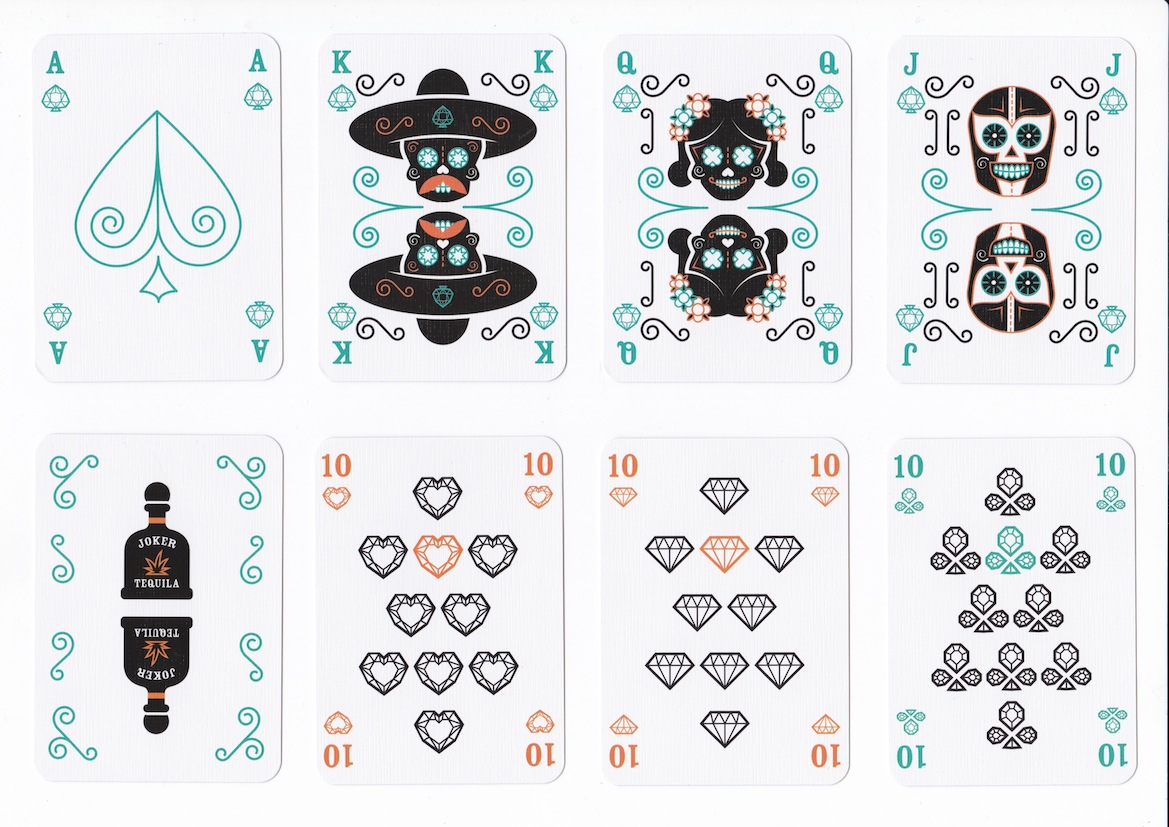 Other recent non-standard packs by Legends include the following:

Fishing, the same images for each suit. 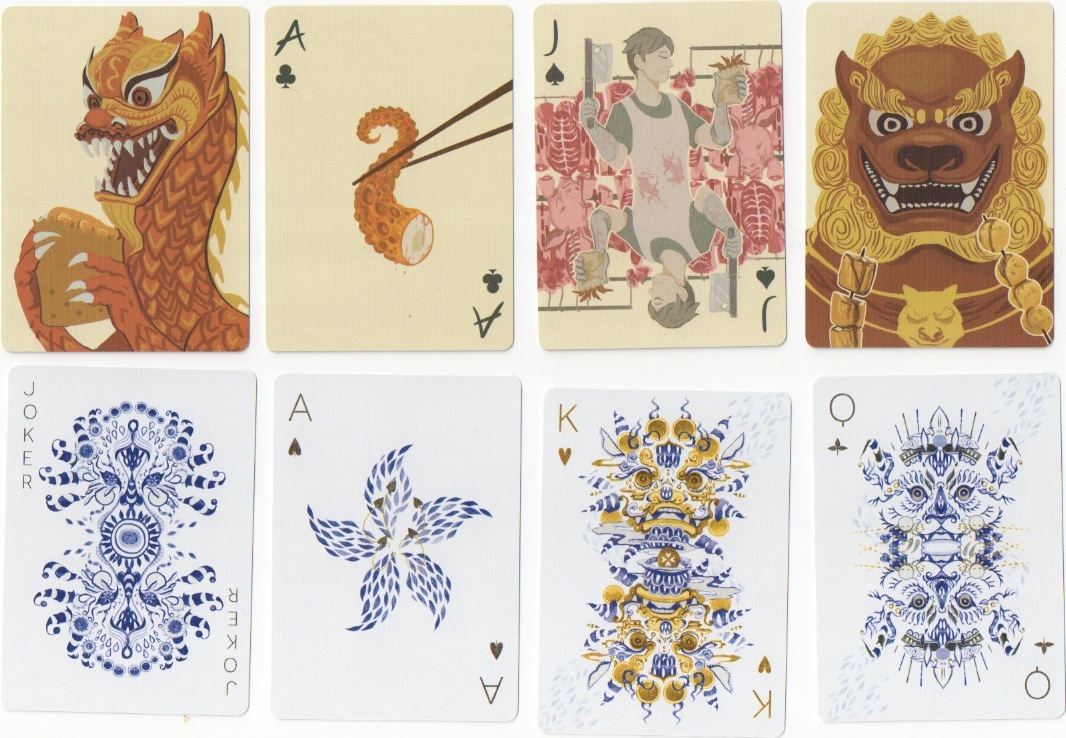 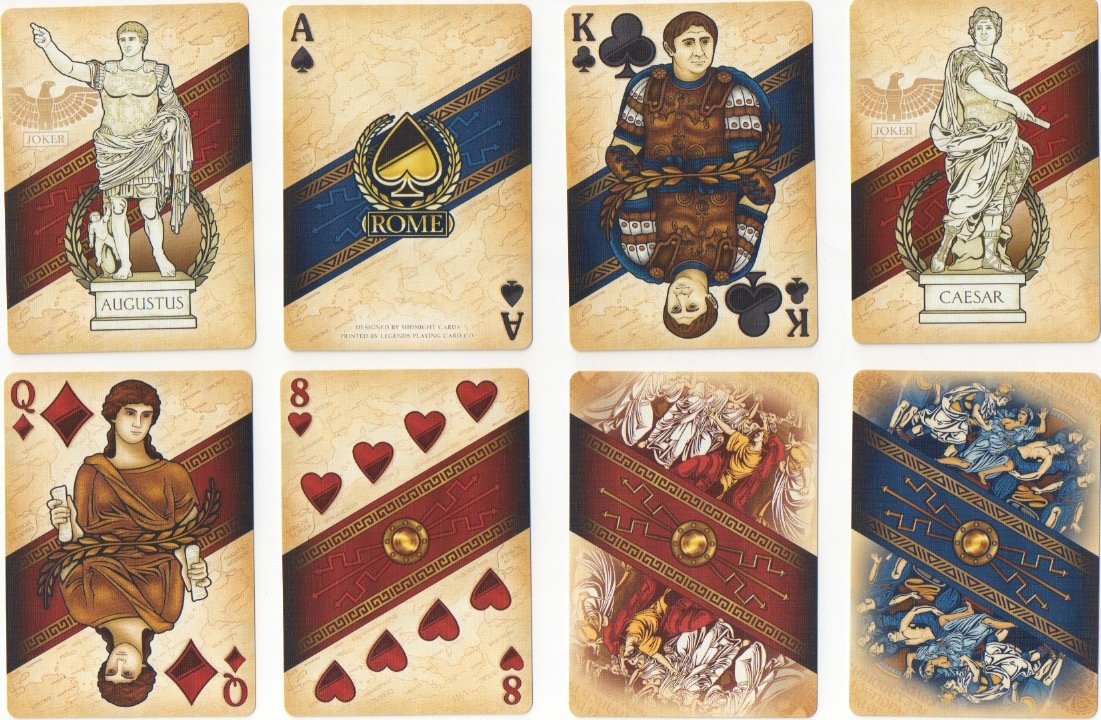 Rome, Caesar and Antony, same designs except for the back design, unusual pip arrangements