When I get new items for my collection, I sometimes add images and information about them to already existing pages. As my whole collection is now online on page 69, it is easier to list new or replacement acquisitions on this page, so that I don't have to keep renewing the existing linked pages with just one or two packs. 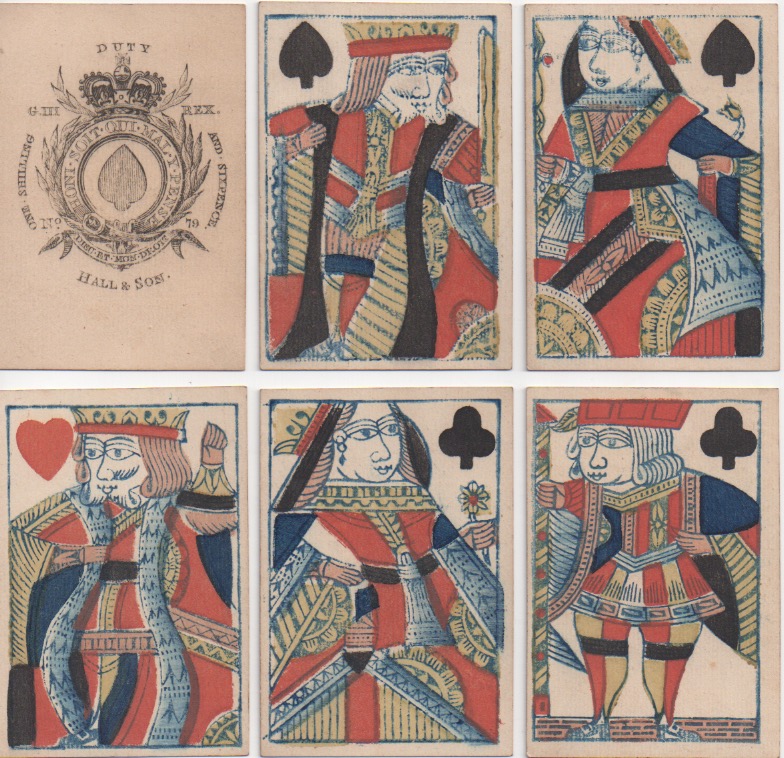 385: As most collectors no doubt do, when I get a better copy of a pack already in my collection, I swap it for the one I already have. So this pack is a replacement for an incomplete one by Hall. It only has 32 cards, so was presumably used for piquet (too early for bézique). The KH is interesting in that his sword has been removed. This is the section which normally has the initials 'HC' carved on it, probably indicating the block-maker, Henry Crick. The pack dates from c.1812. 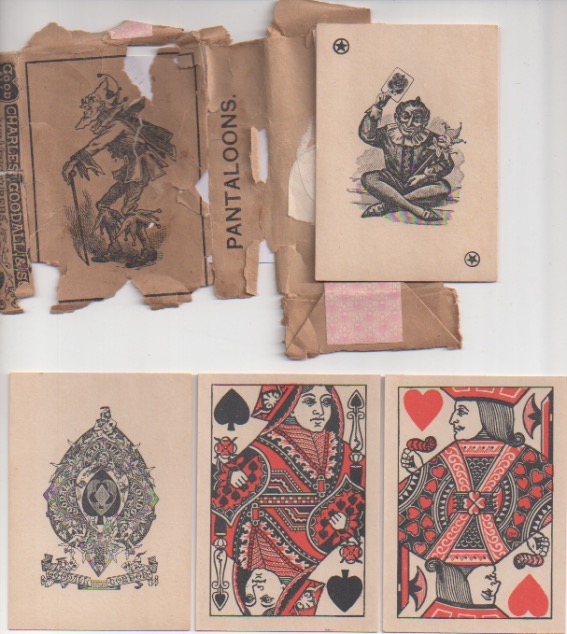 595 A replacement example, as this one has a joker and the remains of a maker's wrapper: these cards were sold as Pantaloons, c.1900. Plus an unused maker's wrapper. 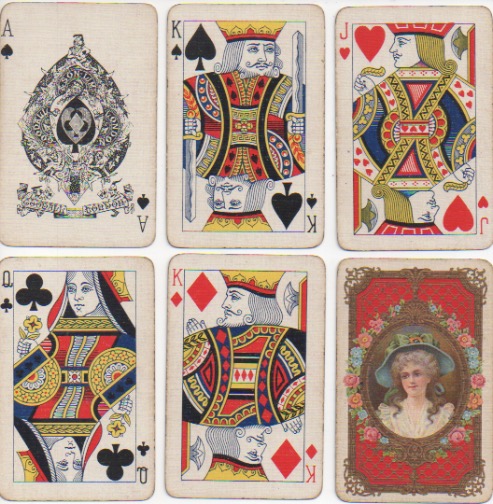 1830a Goodall G10 court set, AS and two pip cards. These courts are the first redrawing of the bridge-size cards (Society) before the take-over by De La Rue and their pips, except for the spades, are smaller than those of 1830. c.1920. These are the basis of the later De La Rue printing of the courts (GD10). 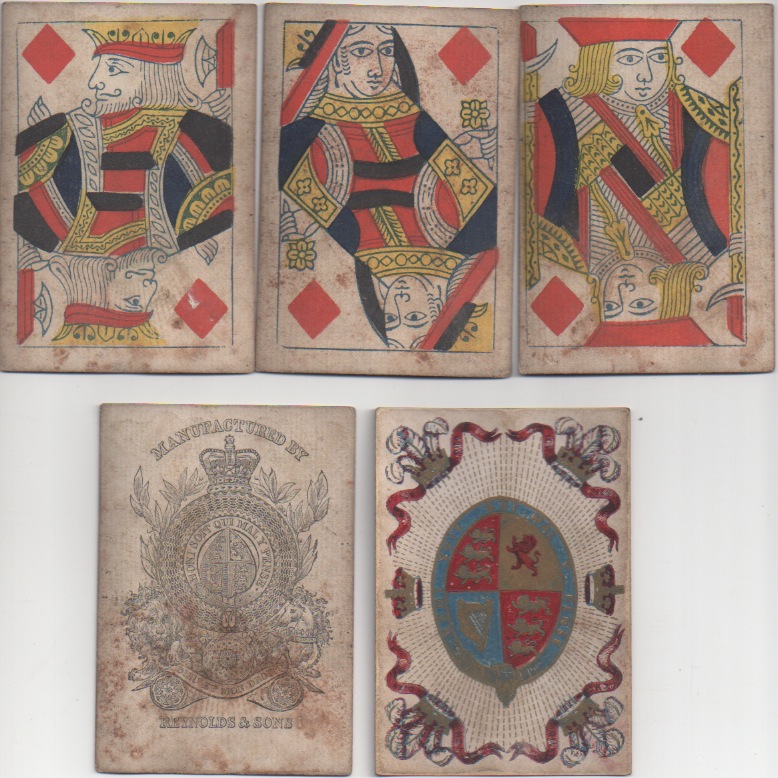 1838: Reynolds double-ended wood-block (R4) for the Prince of Wales. I have two other examples, but this one has a post-Frizzle AS, so it was probably reissued c.1863 for the Prince's wedding. It's a nice example of old-fashioned cards still being produced when other makers had much more up-to-date designs. It's in fairly poor condition, having been attacked by damp, but will I see another one? 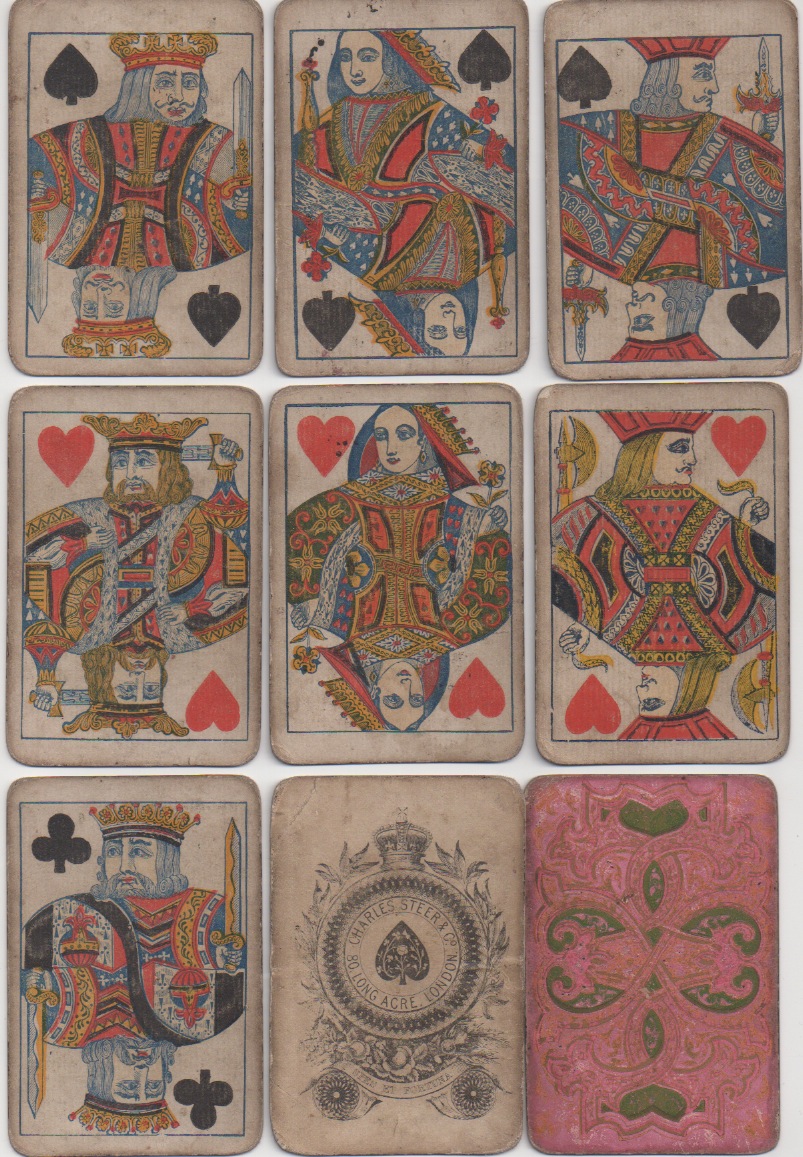 1891: Charles Steer is not exactly a common maker. I never thought I'd get one of these, so a well-worn, incomplete example is fine by me. They are exactly the same as the cards sold by Perry but with Steer's name on the AS. The back design is one which I have in different colours on a Whitaker export pack and is similar to one used by Lawrence & Cohen in monochrome. Steer was taken over by Willis in 1869, so these date from c.1865. 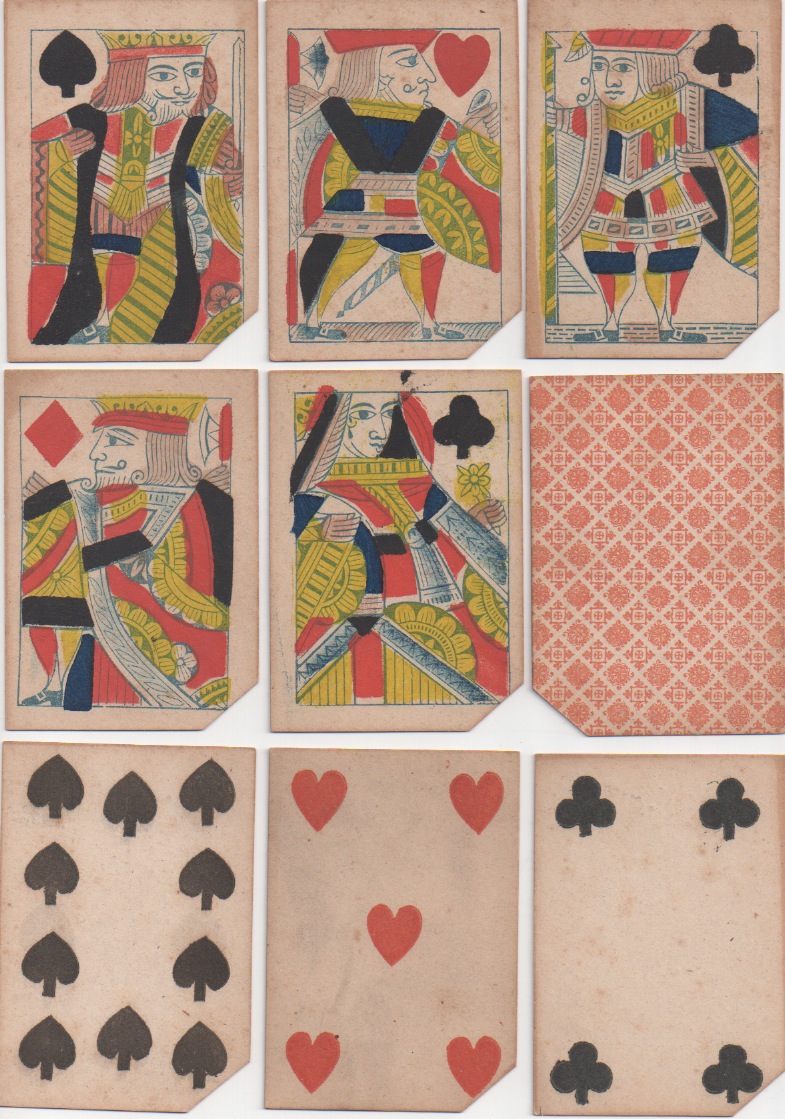 1907: An interesting tax-dodging pack by Woolley or Sabine. The pack includes a blank for the AS with a matching back and the pip cards are printed rather than stencilled. The courts are the same as those by Woolley & Sabine on the plainbacks site (F16). Probably from the 1840s after the partners had split in 1839. 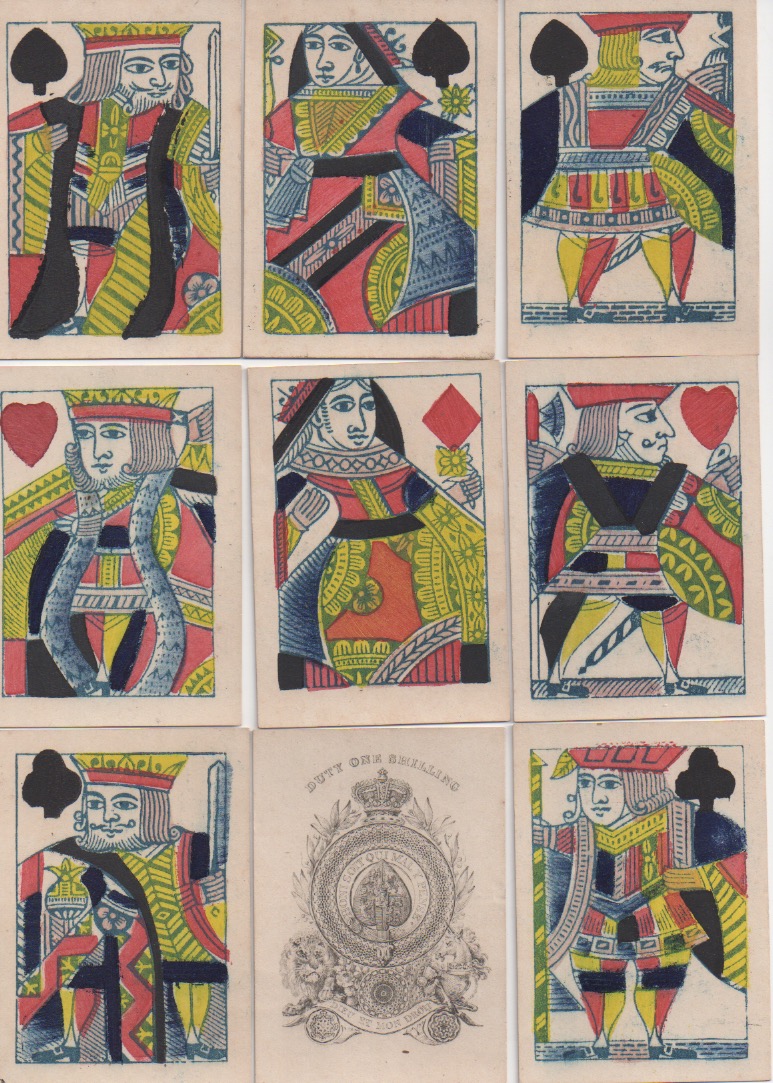 1954 And here's one from the same blocks with an anonymous Frizzle AS and stencilled pips c.1840 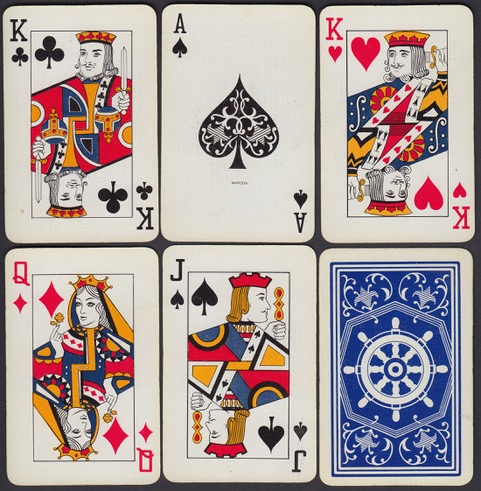 1937: Now this is a really tricky one. Good Luck cards with Mardon on the AS and box - apparently related to Mardon, Son & Hall! The courts have hints of Piatnik's design. The back looks familiar (shipping line?) but I can't track it down. c.1950. John Haffler has drawn my attention to the firm in former Rhodesia that was, indeed, connected to Mardon, Son & Hall. I've looked on a few websites, but there is no mention of playing cards.

1946: Now here's an intriguing one! Hardy, c.1820, but only 40 cards. There are no 8s, 9s or 10s, so the pack is designed for use in games such as Ombre, which was popular at this time. It's unlikely to be a coincidence that these particular cards are missing by chance, and it's probable that they were bought in this format. A century earlier the maker Edward Warman was advertising packs intended for bassett, piquet and ombre. There is evidence in the records of the Stamp Office that packs for ombre and piquet were supplied with the appropriate number of cards (40 and 32, respectively), and that the missing cards were supplied illegally to make up such packs that had been slightly used into full 52-card packs for whist. 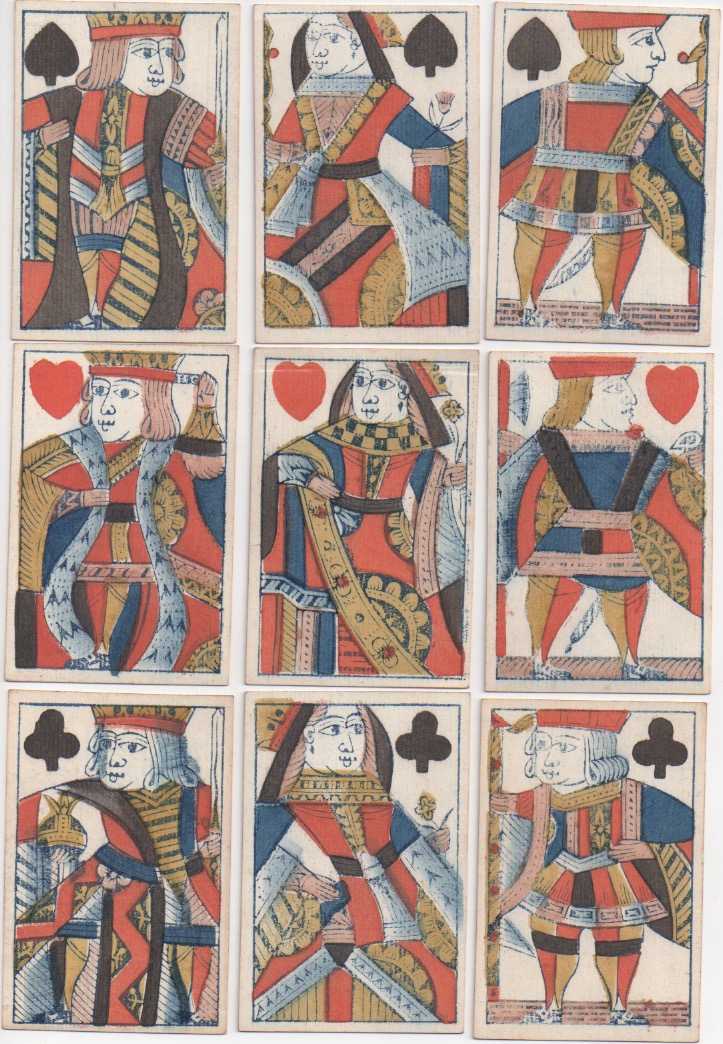 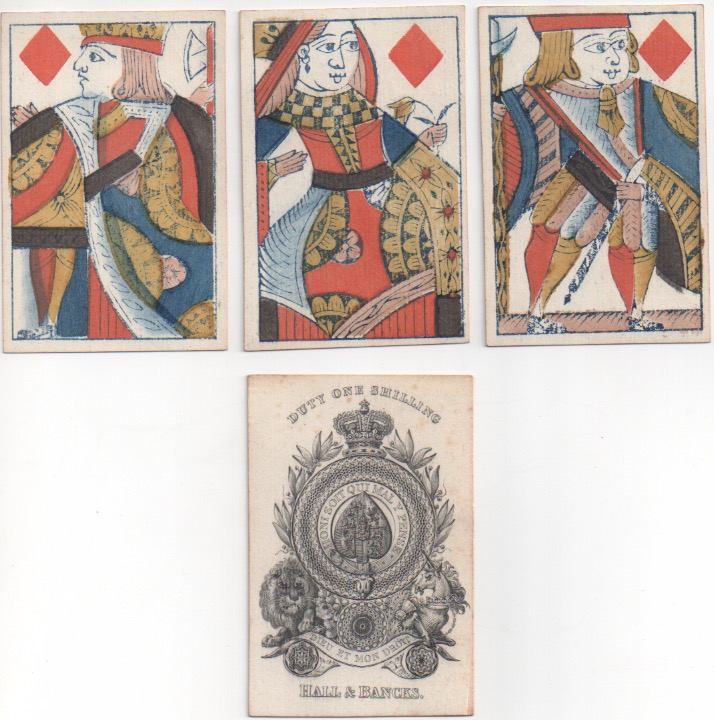 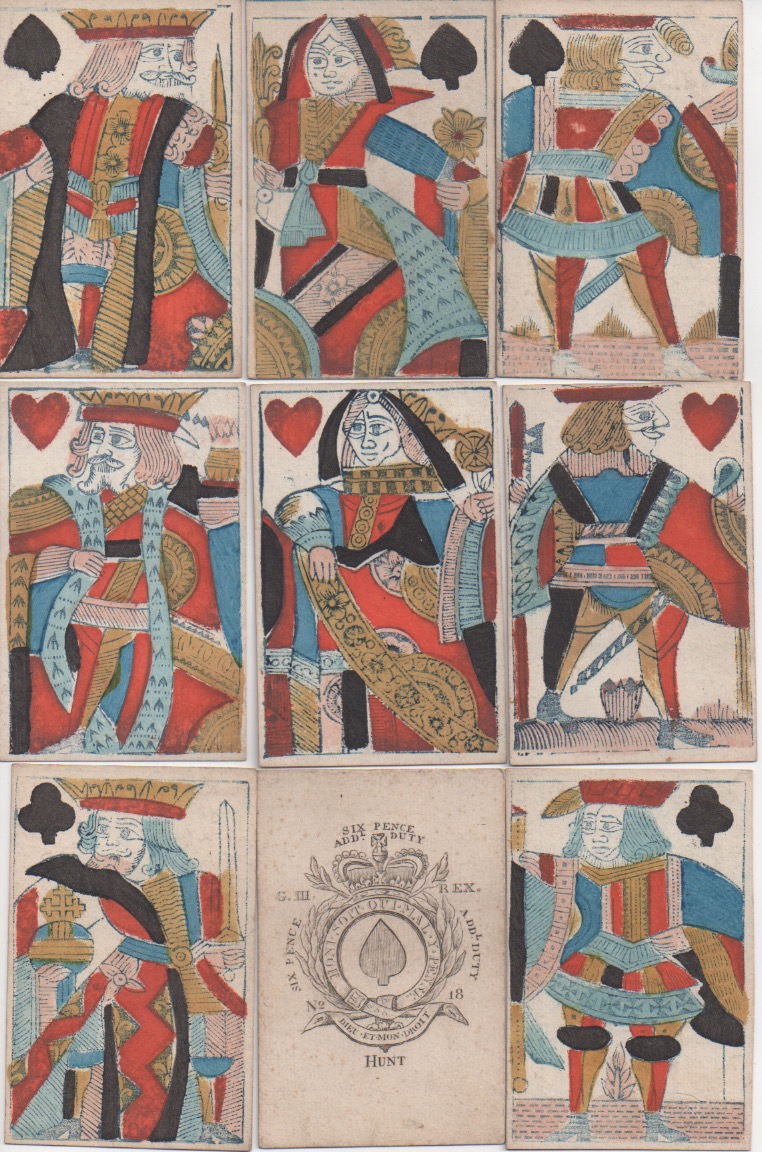 1952 Another one I've known for a long time: there's one in the V&A. It would seem that when Hunt set up his own business, he was given Blanchard's old blocks (or printed stock) by Gibson, who inherited them. This pack is cut slightly smaller than the Blanchard ones, but they are narrower than those of other makers of the period. c.1790. 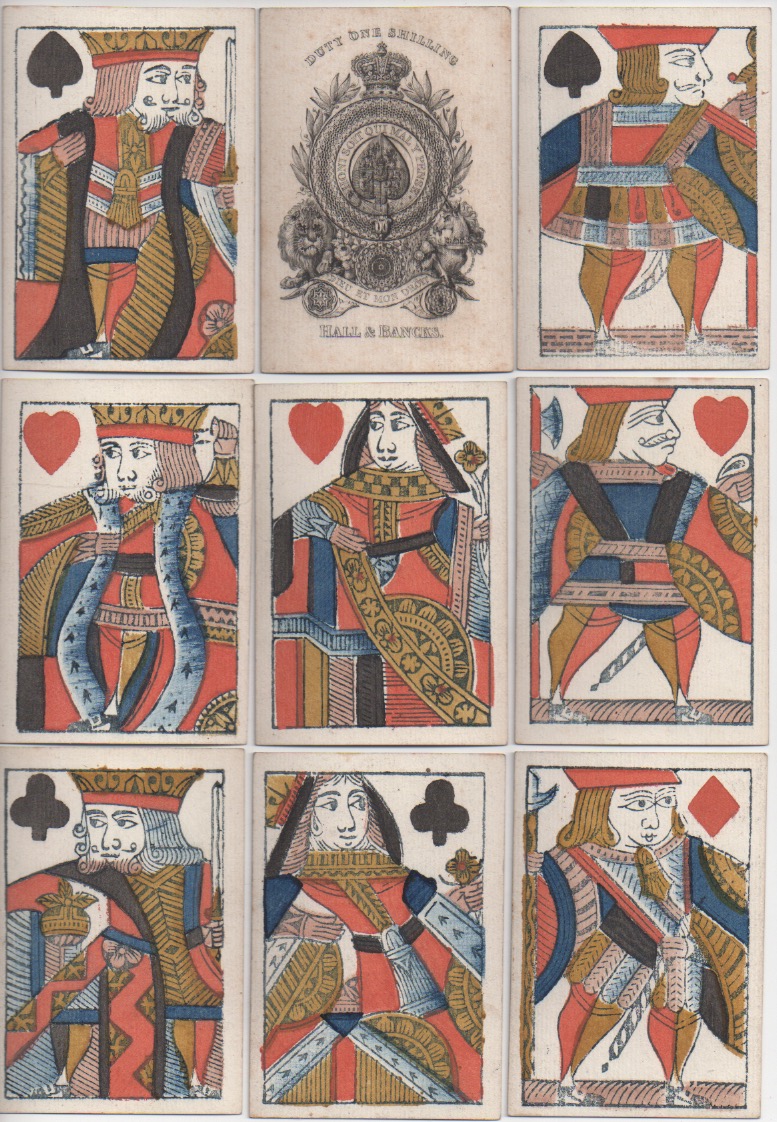 1957 When I saw this in an auction catalogue, I saw a mixed pack: Creswick CR1 courts with a Hall & Bancks AS. On closer inspection I can see that not only are the backs all the same colour, but there are some differences between these courts and those of ordinary Creswick packs. The red jacks here are like those of Hall's later Type II ones, not the ones like Stone or Reynolds that Creswick uses. The colouring on some of the courts is also different, such as the order of the colours below the QH's sleeve. Again these are in the order they are in Hall's packs, not Creswick's. So what are we to make of this? I know of no connection between the two firms. The only possibility I can come up with is that Hall & Bancks bought some of the old stock or blocks when Creswick's firm was wound up in 1843. Who knows?!! 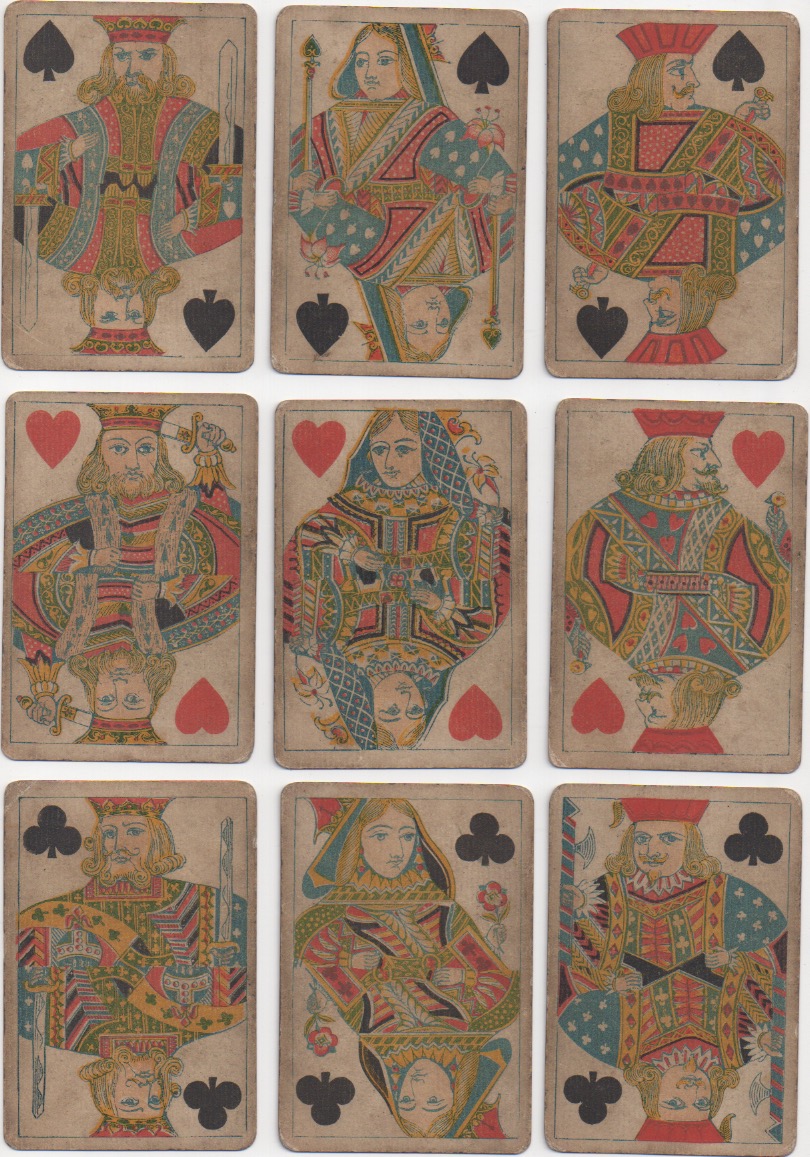 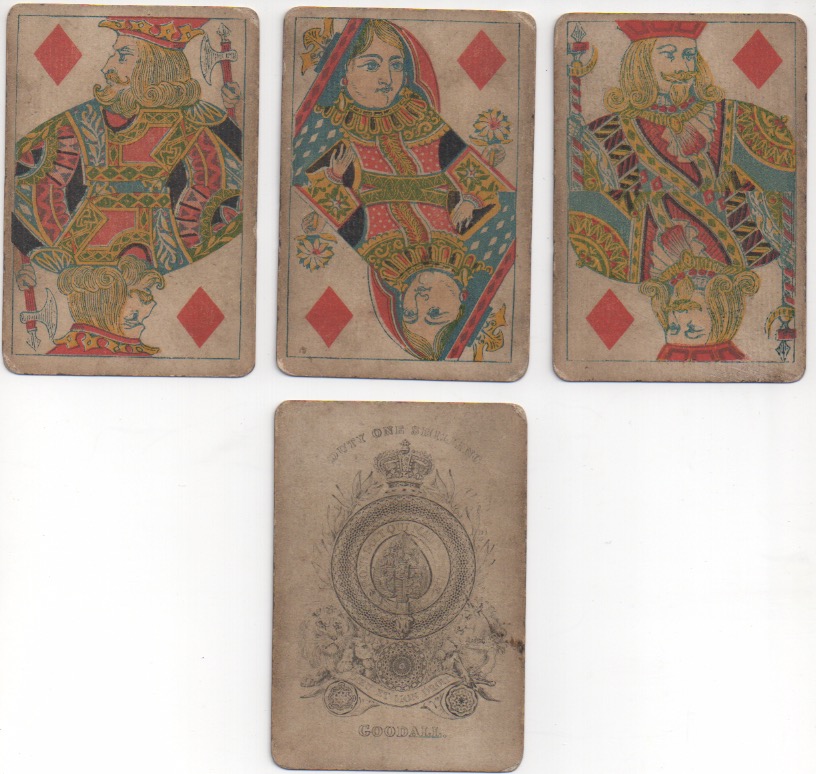 1970 Yippee!!!! I've got one! This is Goodall's rarest set of standard courts, G2.1 from c.1860. Just a grubby court set plus Old Frizzle, but since I only had a grubby photocopy up until now, I'm more than satisfied. These amazingly complicated designs didn't last long, though I've seen a single-ended version with a post-Frizzle AS from the period of the bézique mania of 1869-70. The courts are made by printing the top half of the design twice rather than integrating the two ends in an overall design. The single-ended version is 1983. 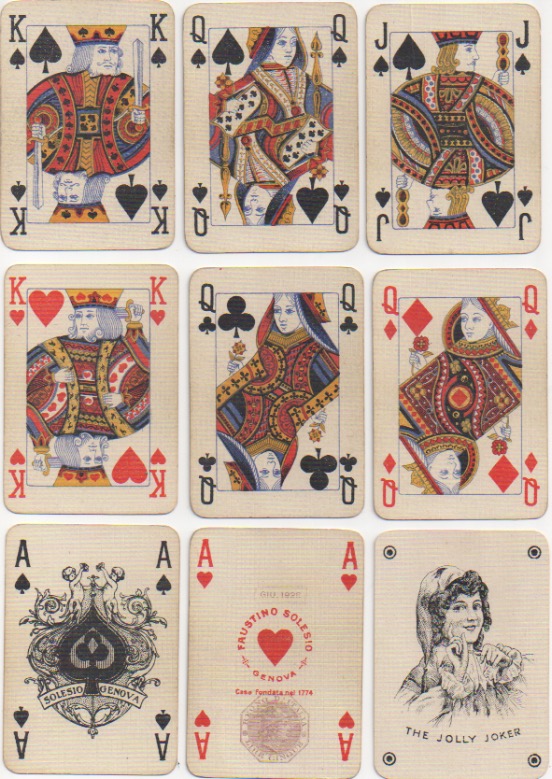 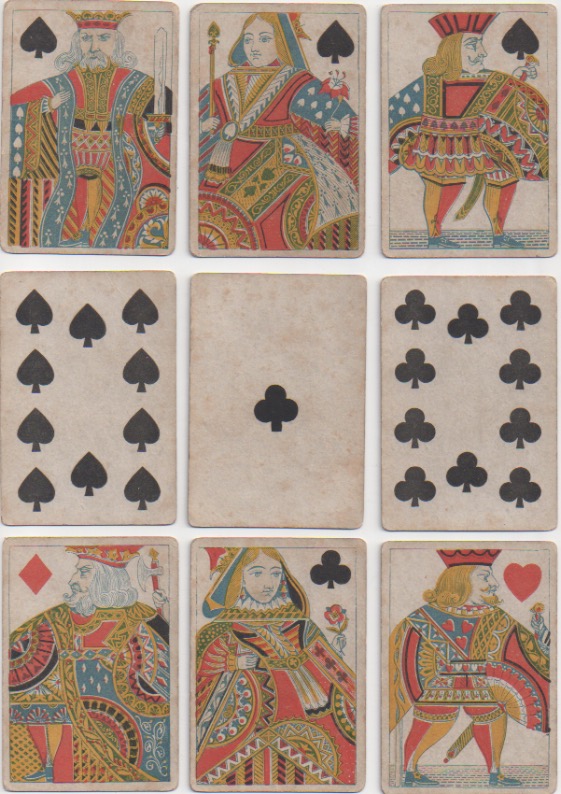 1983 Goodall G2, the unusual court design that was soon replaced by G3, the basis of all later versions, c.1858 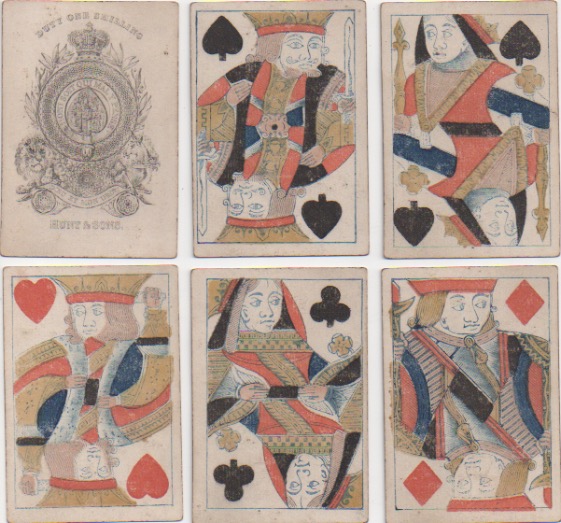 1985 Hunt HB1.1 with Old Frizzle. What may seem a fairly mundane pack is evidence that the double-ended version of the Hunt/Bancks design is earlier than I thought. The Hunt Old Frizzle was replaced by that of Backs Brothers in 1849, so these cards must date from either just before the change of just after and the firm is using up the stock of old Hunt aces. c.1848-51 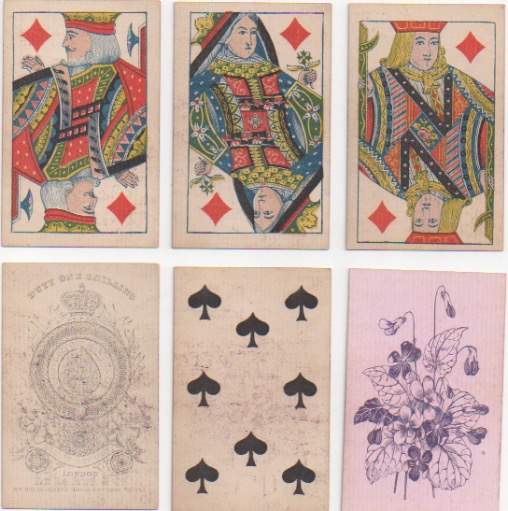 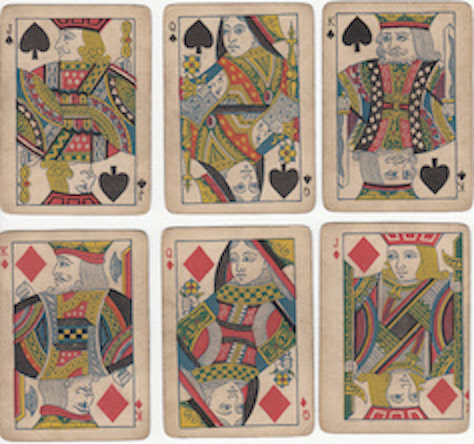 1987 Pearsall Ltd. A very strange pack in that it is seemingly a copy of contemporaneous Dougherty courts, but the heads of the spade courts and JC are all turned against the body posture. The maker is very obscure, but is probably Canadian according to Dawson & Dawson. c.1890 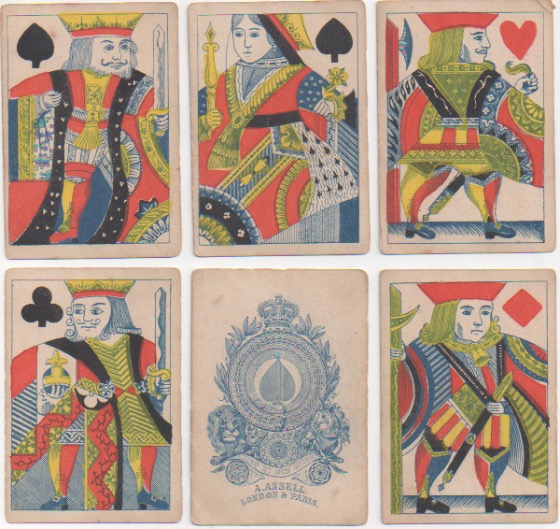 1989 Van Genechten for Ansell, a copy of De La Rue's D3, c.1850. Cards like this were also imported into England by Hardy using his own Frizzle AS during the last few years of the firm's existence (finished in 1853). 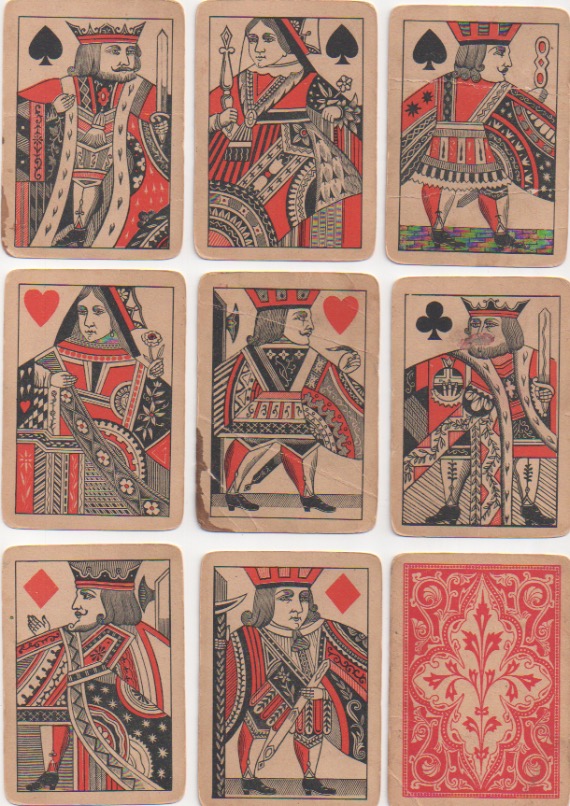 1994 Burland of Canada, c.1880. A tatty, incomplete pack, but an interesting one, nevertheless. The courts are like those made in Turnhout and the back design is a copy of one by Owen Jones for De La Rue. 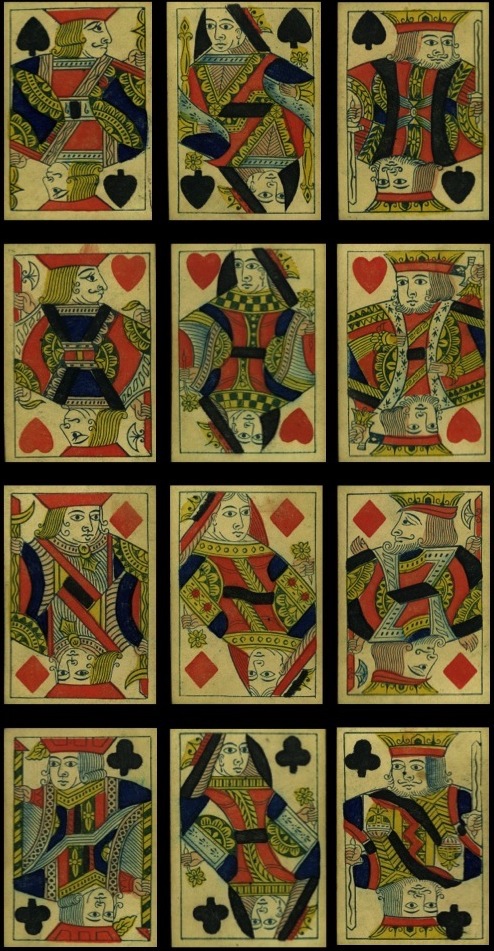 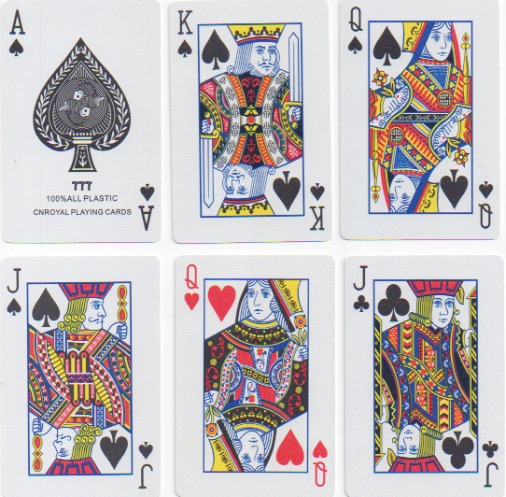 2002 Angel 777 with a version of US7 that Laherte Guerra calls "doll face" - a good description! There are a number of similar ones on the market and it's difficult to know exactly where they are made. Angel is a Japanese firm, but the cards appear on Chinese and Korean websites. Not all of the varieties seem to be available in Europe, unless you want to order thousands of packs!

099 USPCC Congress double box with Art Deco backs 'On leash' and 'Promenade', to replace the pack listed on the Russell & Morgan/USPCC list, AS US6i, one dated 1928, one 1929, gold edges. 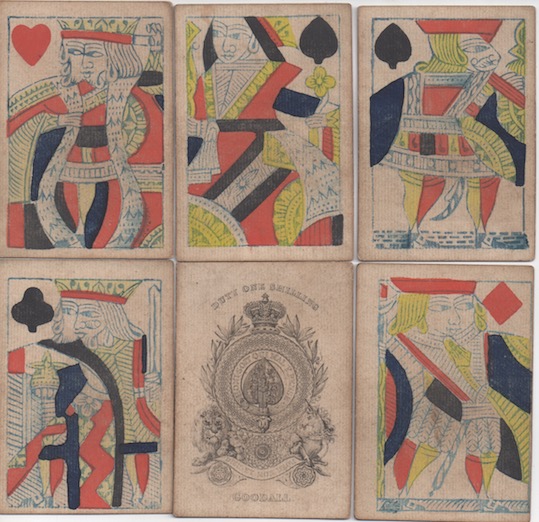 685 Replacement: Waddington W2.11 in the Pelham series, c.1935. Pelham was used as a brand by Boots, usually made by De La Rue; neither the series nor the back are mentioned in John Berry's book on the Waddington archive. 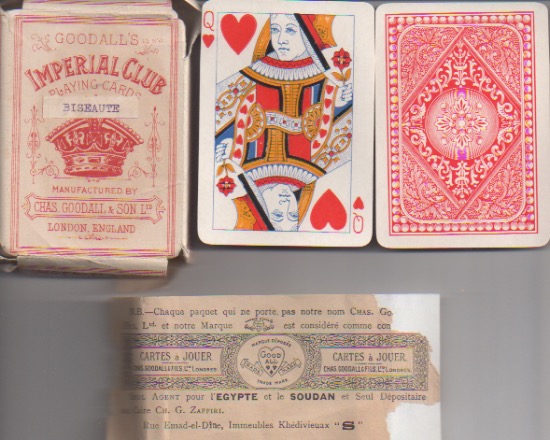 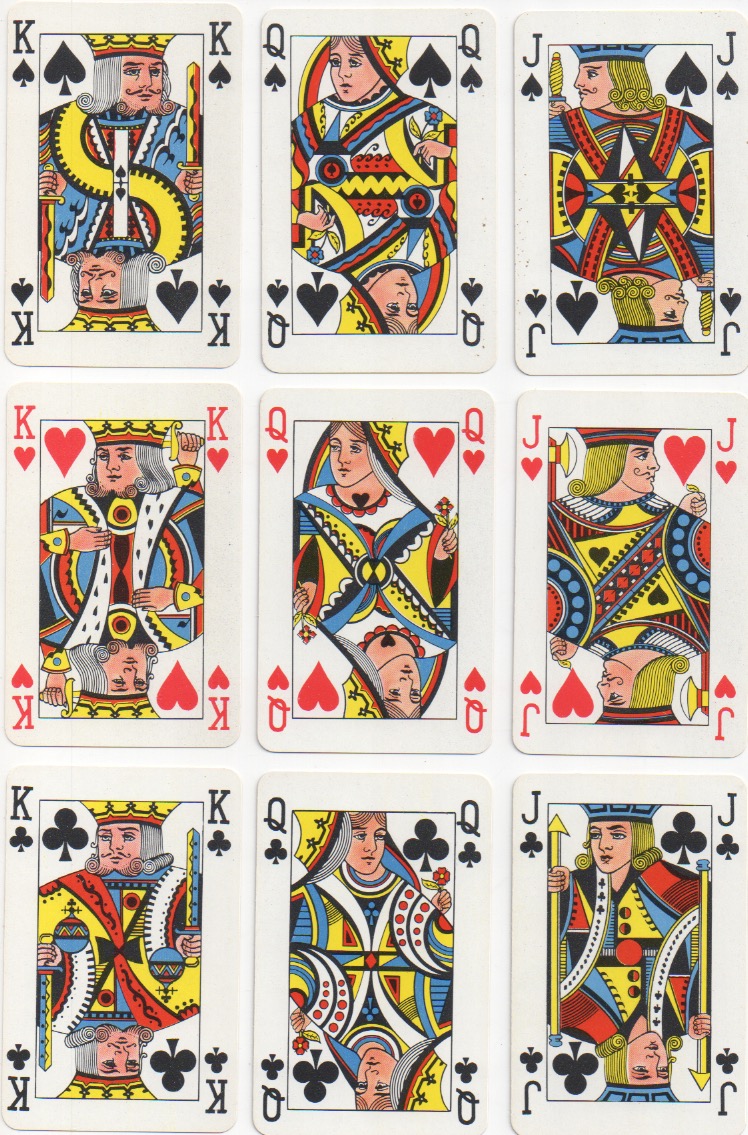 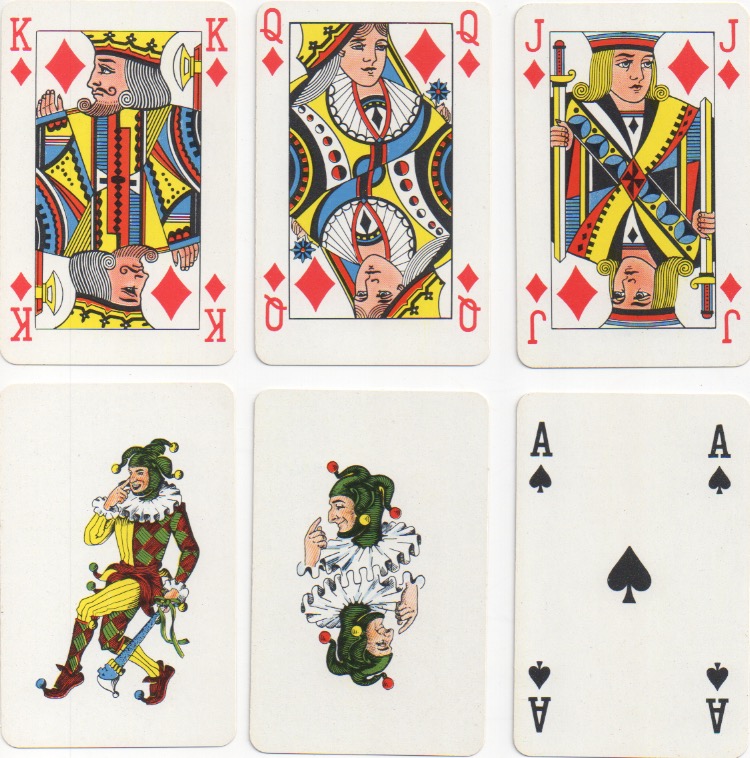 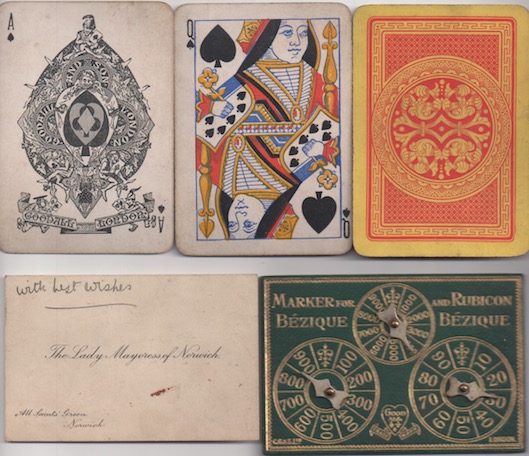 1804a Goodall Camden bézique, G5 courts as 1804, two packs with markers. The label inside the box lid has the number 9492, not listed in Mike Goodall's book on the firm and the family. A gift from the Lady Mayoress of Norwich, bought in Ely. c.1898 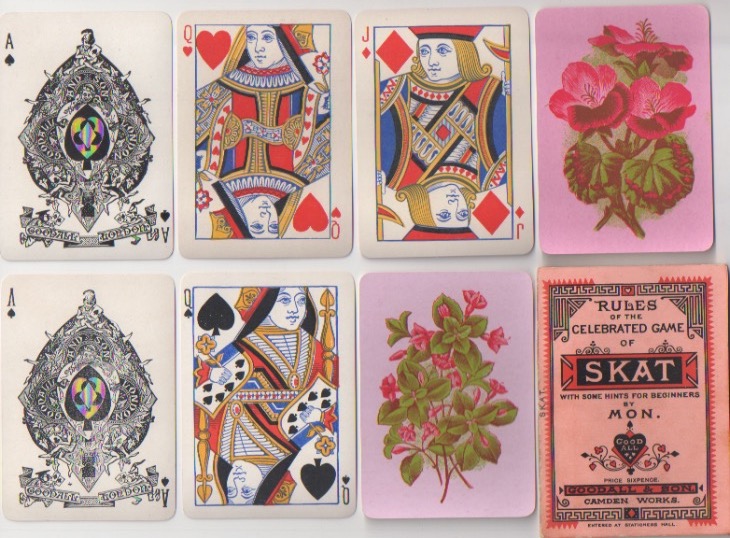 2008 James English/T.I. & Co. advert pack with E2 courts. The AS has been altered at the bottom inside the garter, presumably after English sold off their card production, probably c.1902. I'm sure the later firm didn't last long in the market. This pack is far too good to end up as 'interesting singles'! 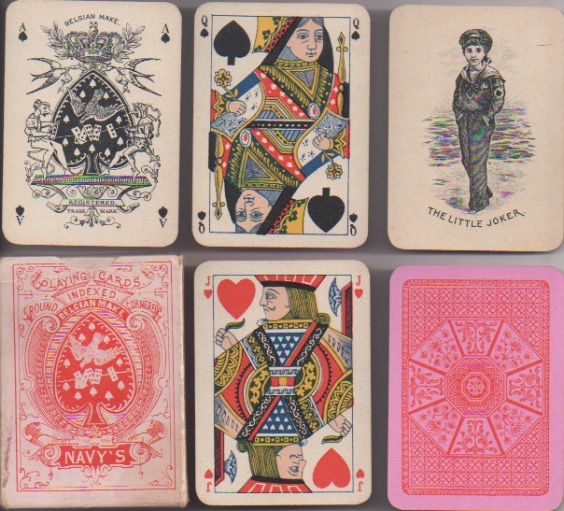