The commonest design used today is the ubiquitous modern USPCC Bicycle courts, as discussed on page 54. But it wasn't always the case. When Chinese cards started to appear in England in large numbers after the import duty was abolished in 1960, the commonest courts were derived from Whitman's design for bridge-size cards. Here is the original design: 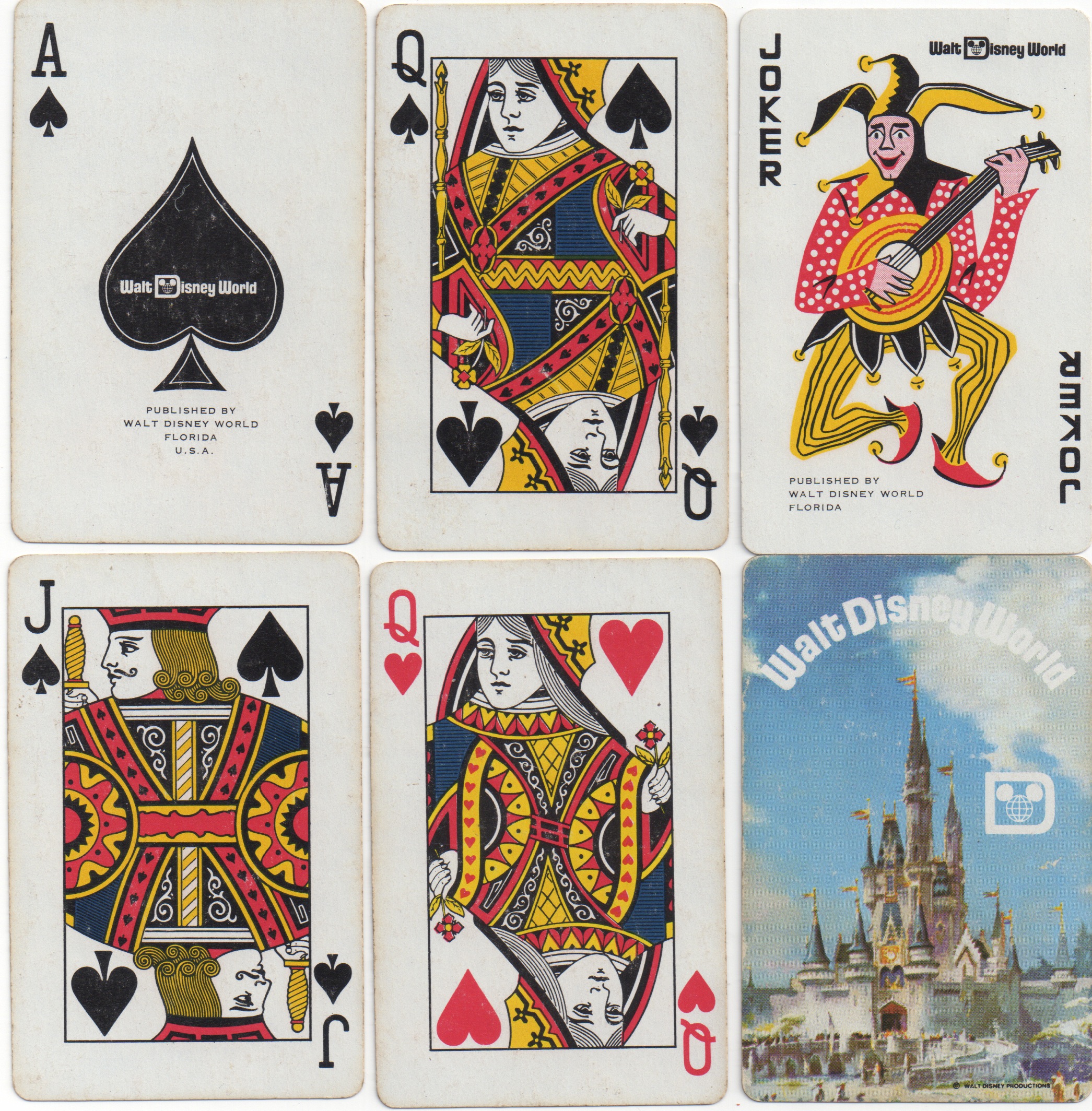 Above: US5.1 by Whitman; the odd arrangement on the QH means that this design has 5 pips left and 7 pips right, rather than 6/6.

Above: These were made by the China Paper Cutting Company Ltd of Shanghai and were imported into England c.1960-65. They retained the original postures of the courts including the left-facing JS and the QH with a right-hand pip, and the clothing and colour distribution have been altered a little. CUS5.11

Soon a redrawn version was introduced with all the pips on the left so that the seven courts were turned. There were two versions, both with redrawn clothing. 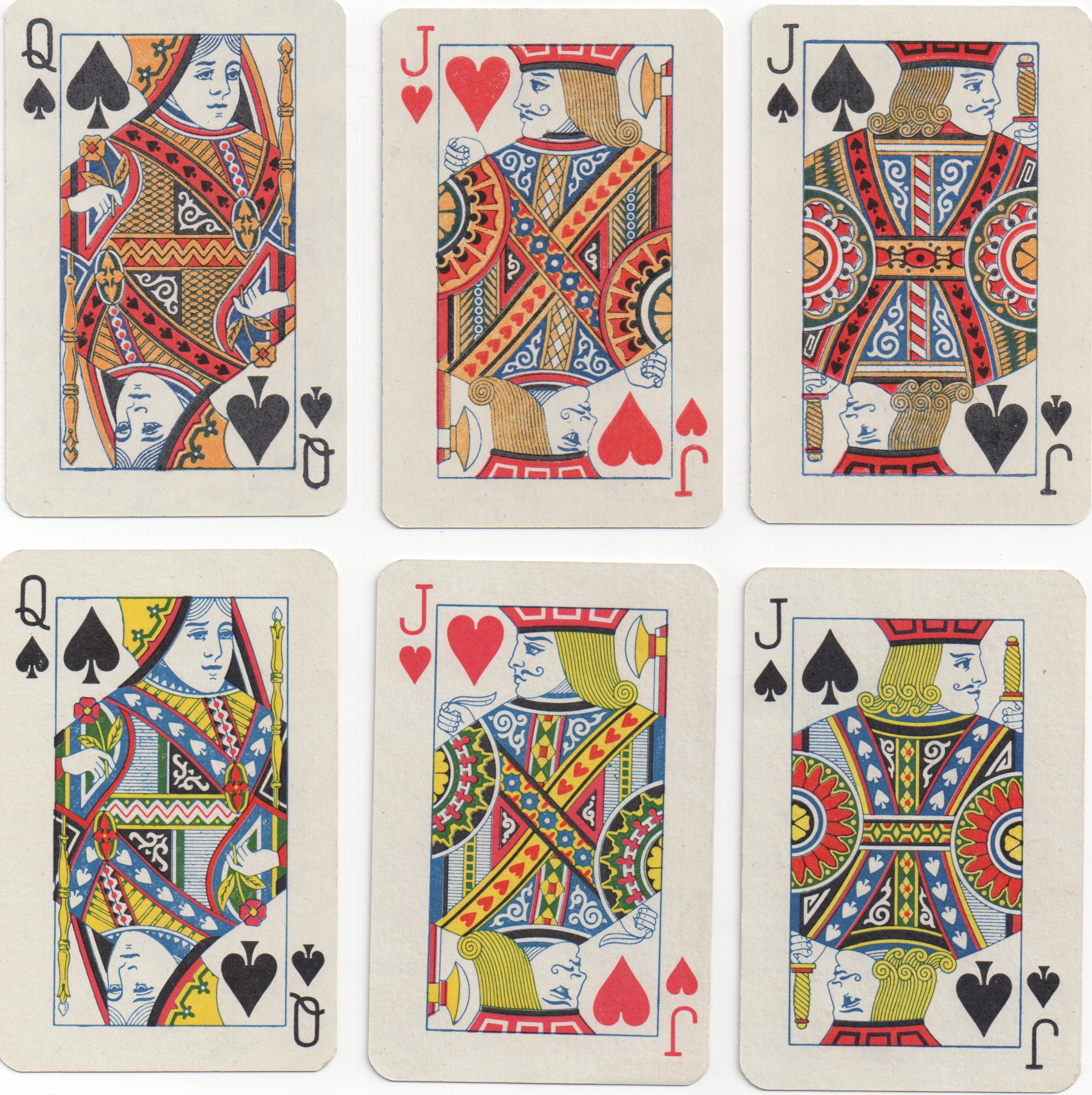 Above: CUS5.13 and CUS5.18, c.1967-75. Compare the altered clothing and different colours. These designs have continued in use right up to the present day.

There are often bits of the design missing: a particularly good example is the JH's halberd and, in particular, his leaf. He has no leaf in the top version and a clear leaf with a rib in the lower one. Now take a look at the variants below. 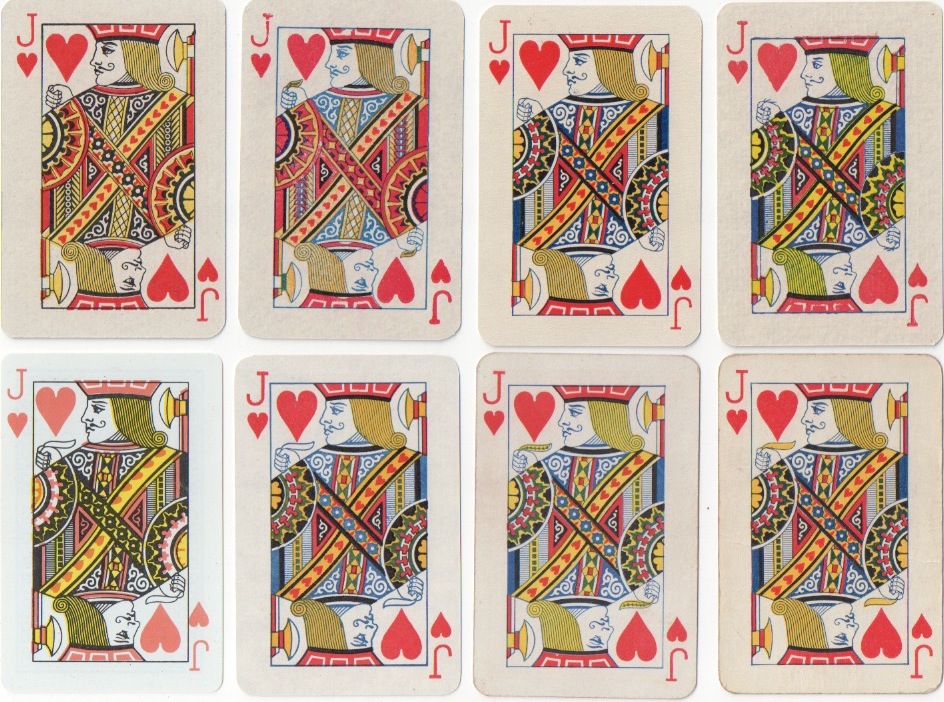 Some of the redrawings don't seem to have lasted very long, for no apparent reason. 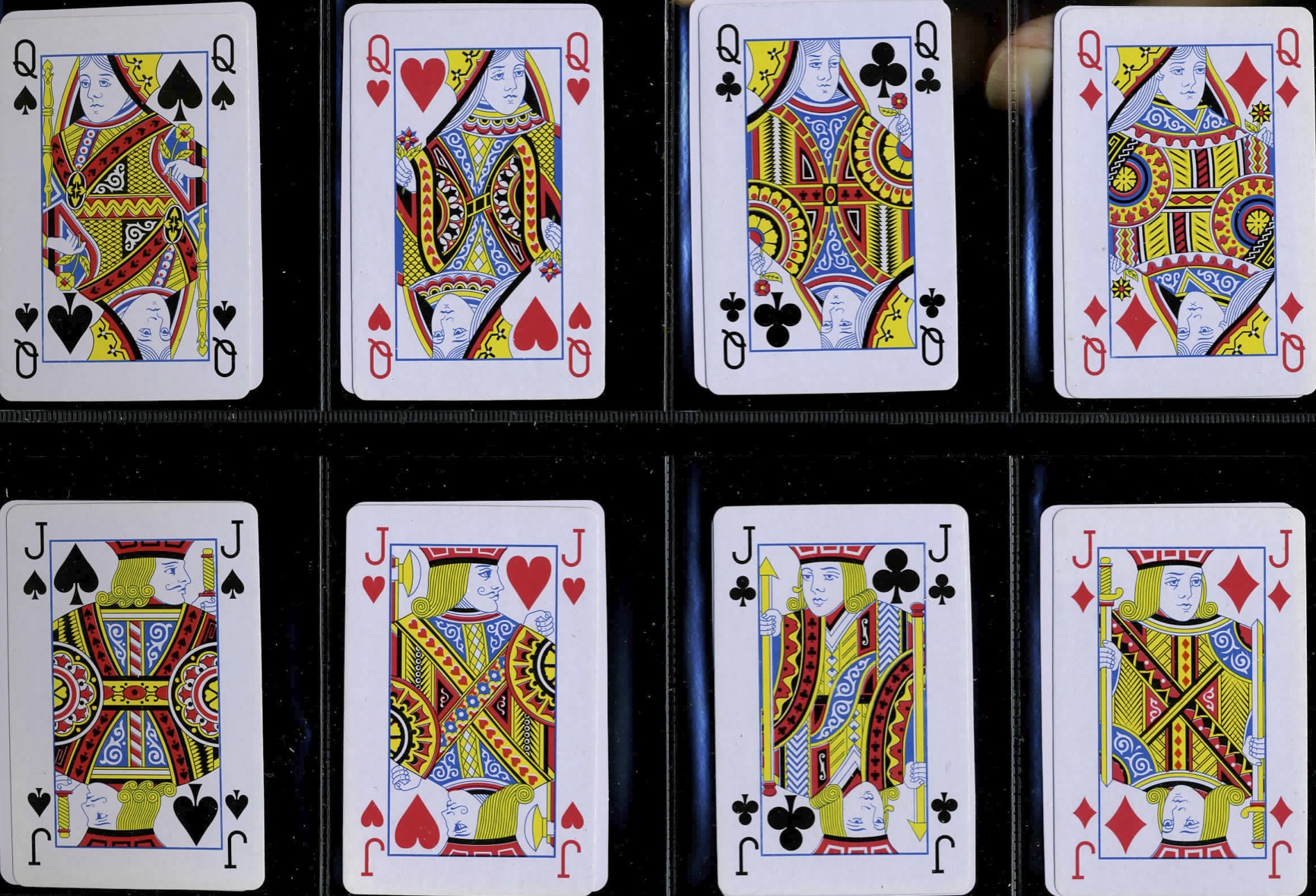 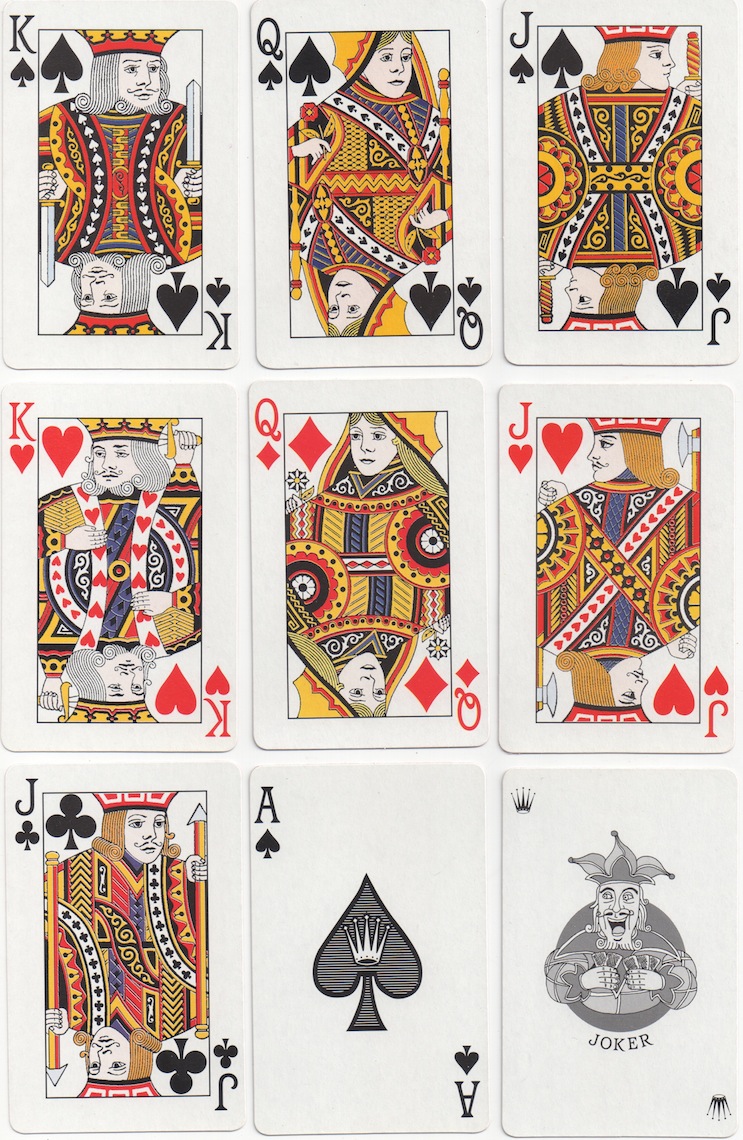 Above: the most recent redrawing of the design I've come across was bought in Cadiz in 2017. Several faces have been redrawn and the courts that usually have no moustache have been given them and vice versa. Interestingly, they are made to the same size as Spanish cards, so are longer and slightly wider than the usual versions. The colouring is also different.

There are two further versions of US5.1 illustrated on page 3, one of which is rather strange.

The brands are very varied and you can't predict the cards inside any particular box. Here's a selection: 155 Flying Wheel, Phenix, 33 Tiger, 77 Lion, 3005 Lion, 838 Dragon, 852 Kapokbrand, Berman, 6810 Golden Phoenix. I illustrate them with a few boxes below.

Another design used in China is US5, originally by the American Bank Note Co., which was possibly the model for Whitman's US5.1, as it also has a left-facing JS and a QH with a right-hand pip. The Chinese version (CUS5) is difficult to tell apart from the original except by means of the AS, joker and card quality. 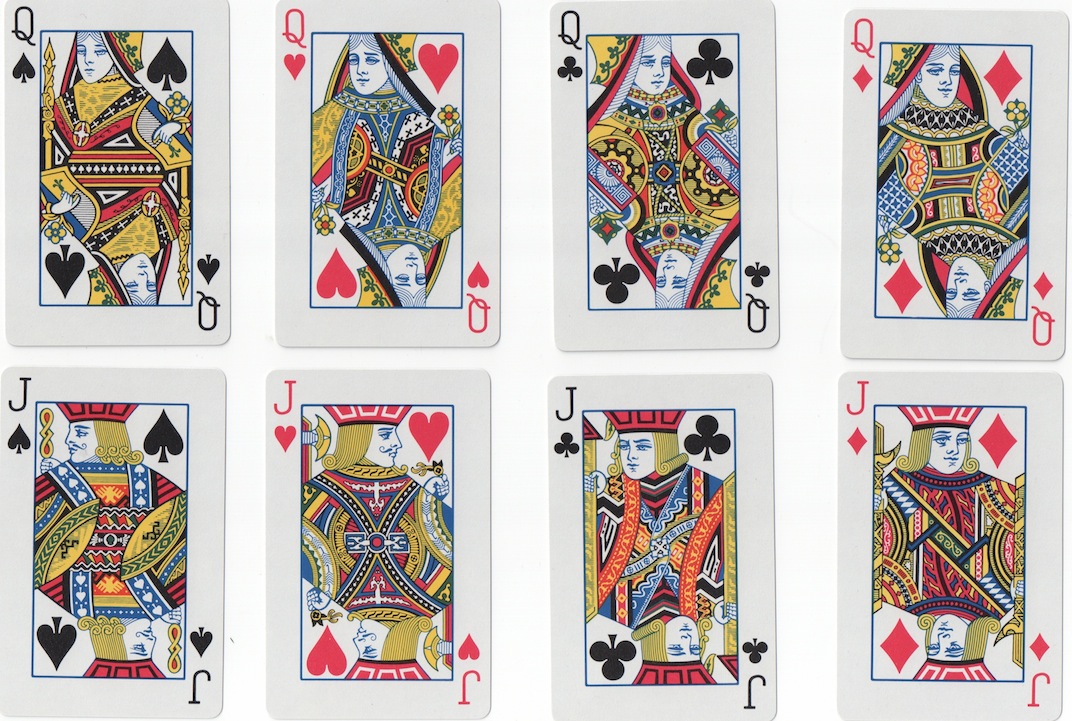 Above: US5 by USPCC

There are also redrawn versions that seem to be for specific orders. The courts are much more fancy than the originals. 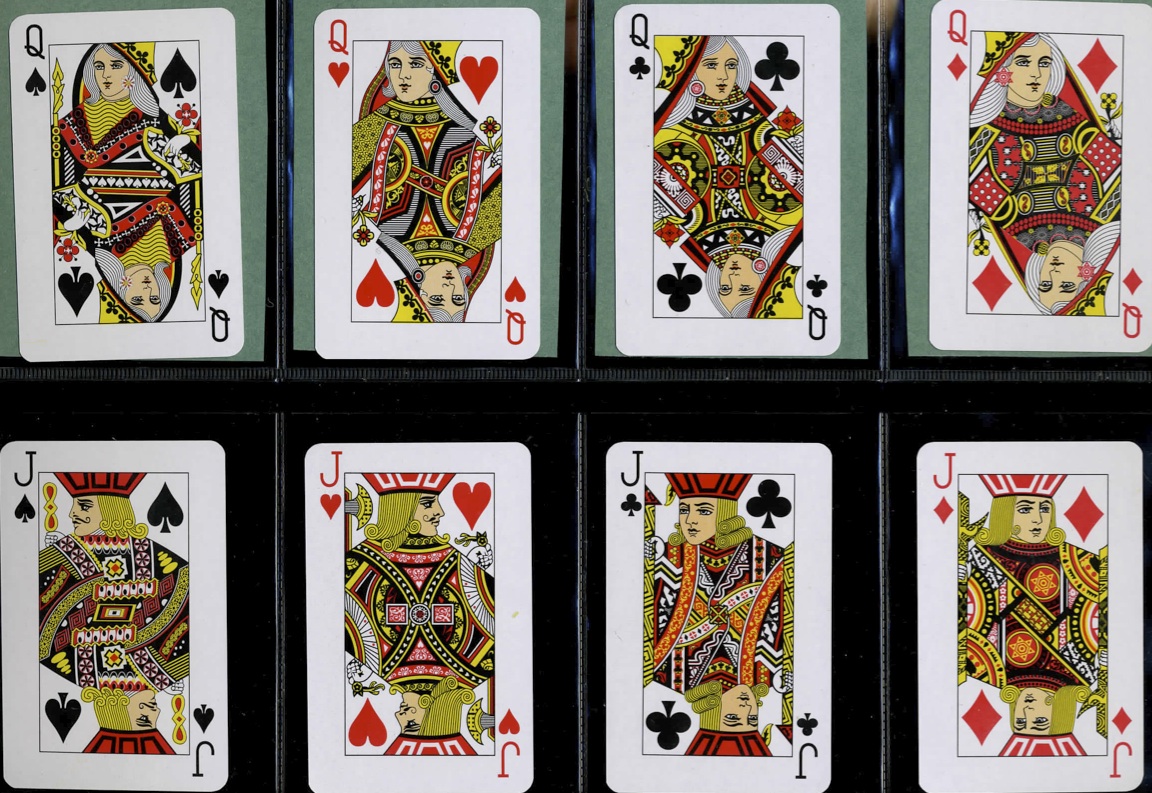 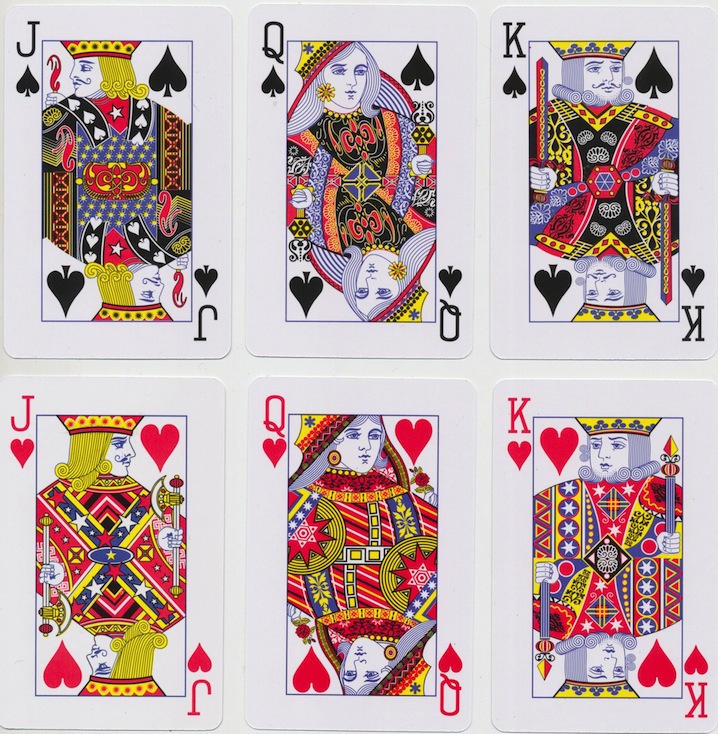 Above: an even more fanciful redrawing of CUS5 with several traditional features altered. Thanks to Matt Probert for this one.

Whilst US5 and US5.1 were used as models for the bridge cards, US4 was used for the poker cards.

Above: CUS4 with an AS based on the USPCC Columbia AS without the figure and a joker referring to the China Paper Cutting Co., c.1965

Again we find variation and the JH is subject to various parts of his leaf and/or halberd being left out. Look at the variation below, even with no leaf and no halberd blade. The JC looses the leaf in his hat sometimes and the outline of his yellow and white centre design is also left out in some versions. 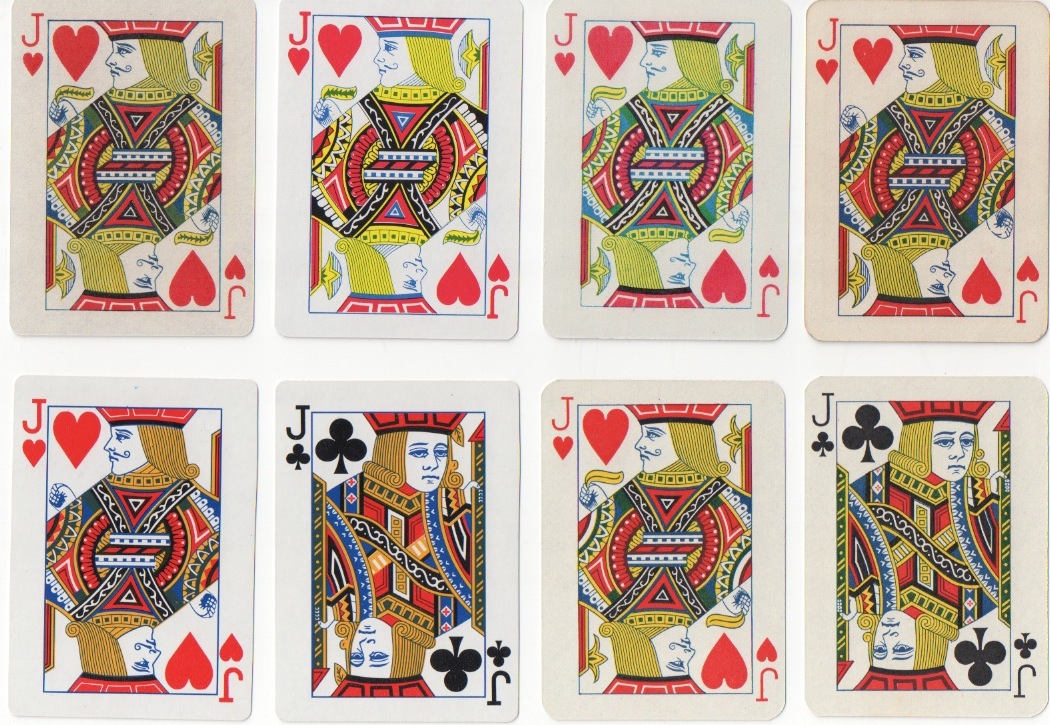 Above: Running after the Moon brand with a different AS and two coloured jokers, c.1975. Usually one joker was in black and white.

There were also three-colour versions, often made in Hong Kong.

Above: Madeira souvenir made in Hong Kong, 1995. Note the copy of the Arrco joker.

Above: colour variant, different distribution on some courts, 702 Squirrel, c.1980 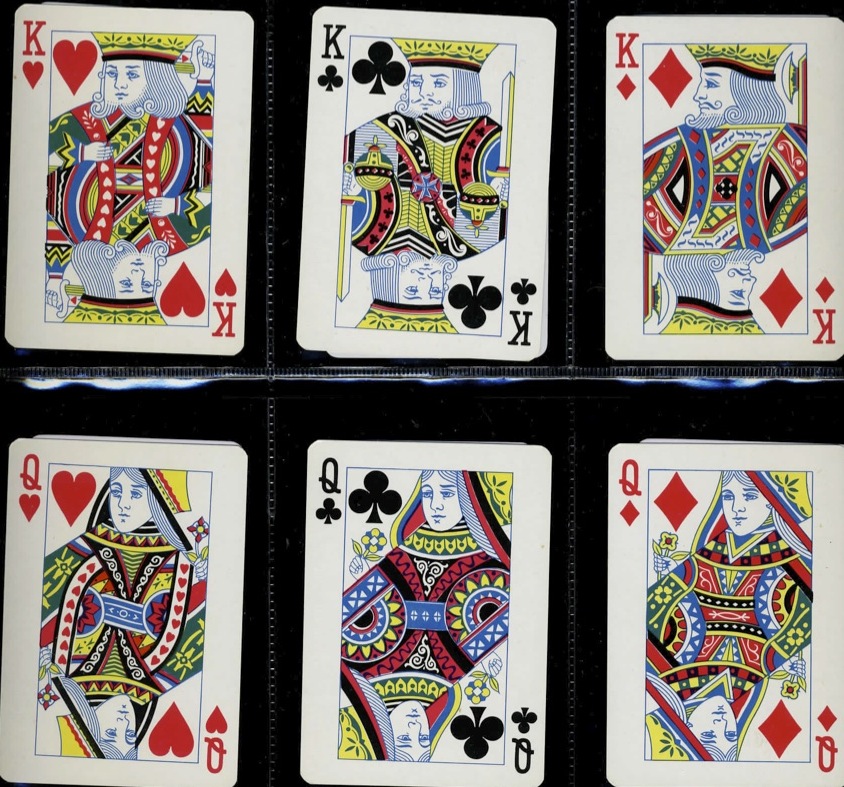 Above: CUS4.2, redrawn with changes to clothing and the KD's hand is missing.

Again we find a variety of brand names and various ASs and jokers.

Above: jokers for the above brands; the AS belongs with the Golden Dragon joker.