At periods of change in playing card design there are often interesting packs which may well have been short-lived. Between 1875 and 1895 cards changed their appearance from square-cornered, unindexed thick pieces of board to the kind of card we would recognize today, albeit made of different material. For example, Goodall at first seems to have squeezed corner indices at the edges of single-ended pip cards in the mid-1870s. The example below dates from c.1878 and is an early example of round corners, too; the 10C lost its top left-hand '1' in the cutting process. They then reduced the size of the court figures by cutting off the edges of the design to accommodate the indices better, and the pip cards became double-ended from c.1880. 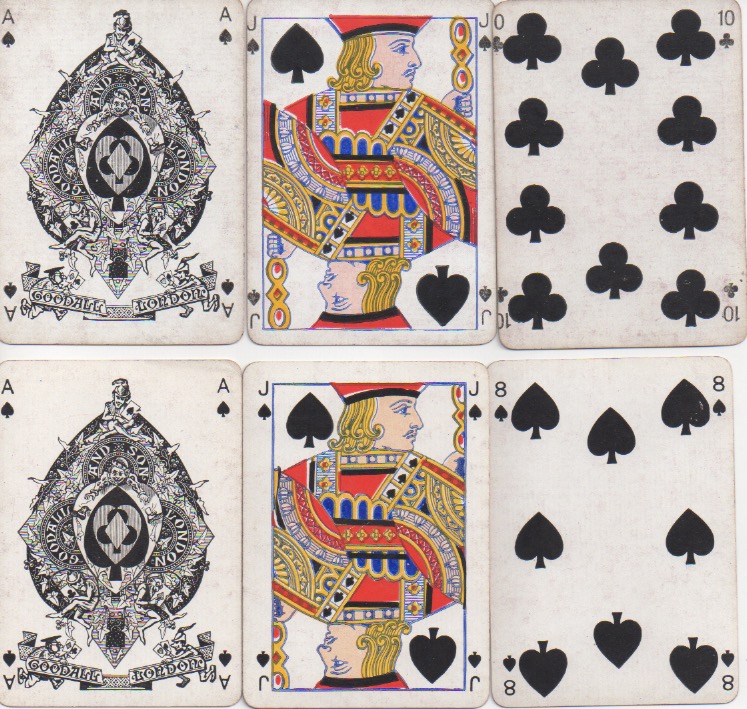 At around the same time they also started to introduce several new grades of card to supplement the standard Moguls, Harrys, Highlanders and Andrews. Why they did this is not clear, especially as some of the resulting cards are difficult to distinguish in terms of finish, thickness and other specifications. The courts and aces are always the same. The grade was printed on the standard AS, as in the examples below.

For most of the 1880s the courts were of the cut-down type (G4.31). One of the advantages of having dated WCMPC packs is that they give an indication of the dates of different types of court card. From 1884-87 the courts of the WCMPC packs were G4.31; the 1888-90 packs were made by Woolley, so are irrelevant. By 1891 the courts have been redrawn as complete designs, rather than old designs with bits cut off. These are G5 and are usually found with long slender indices and were used in WCMPC packs from 1891-1902. Around this time, too, special aces were designed for some of the card grades. Again it isn't clear why this happened, and they don't seem to have lasted for long.

Above: These unindexed cards are unusual. They have G5 courts and single-ended pips, so seem to be an early example of the new ASs, but they are unlikely to be earlier than 1890 because of the court type. Interestingly, a Reynolds & Co pack made for the Royal Warwickshire Regiment has these G5 courts with single-ended pips and square corners.

And there are other packs with single-ended pips, G5 courts and the normal AS, even with square corners, like those below. The bottom pack has a plain back and plain faces on the courts, so is likely to be a cheaper brand, probably Club Cards. 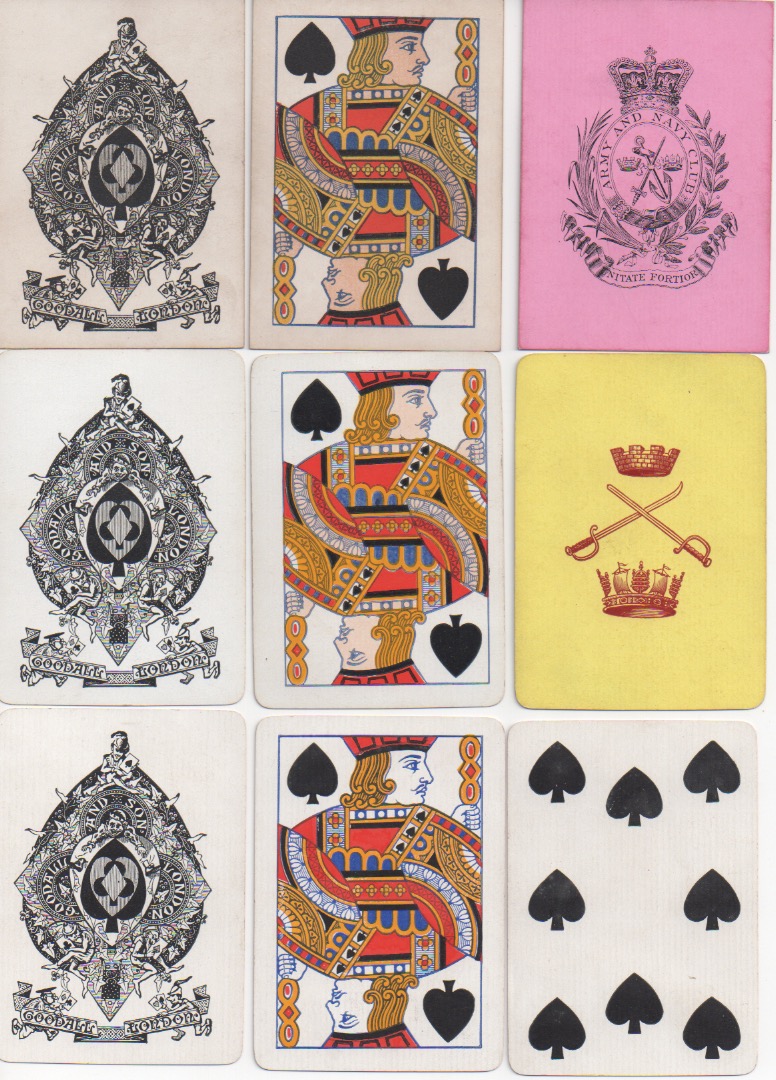 Above: the Harrys are from the 1890s with G5 courts and the Moguls (note the different number from the unindexed ones) with G6 courts and coloured faces from after 1902. The jack's sloping collar of G5 has been replaced by a horizontal one in G6 and the indices are now different; they were used from c.1902 until c.1928, when the Camden Town works were closed. 'Ltd' on the AS also shows a date after 1897, though the G6 courts were not used until after the turn of the century, as far as I can ascertain.

The most elusive of these aces is the one for the British American grade from the 1890s. 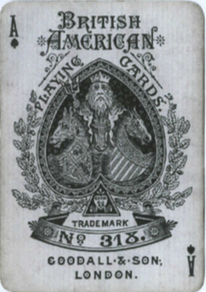 Even standard G5 packs occasionally had square corners and indices, and the London AS sometimes had no indices even though the rest of the pack had them. The back design of the top pack is reminiscent of the Pompeian designs of Owen Jones of twenty years earlier. The bottom example below has a version of the courts of reduced size (G5.1) with the much smaller 'Limd' AS and is found in the revived Shakespeare pack with square corners and no indices as late as 1917. The box has an address with a numerical subdivision of the postal district and these only came in in 1917. The pack could be as late as 1920. 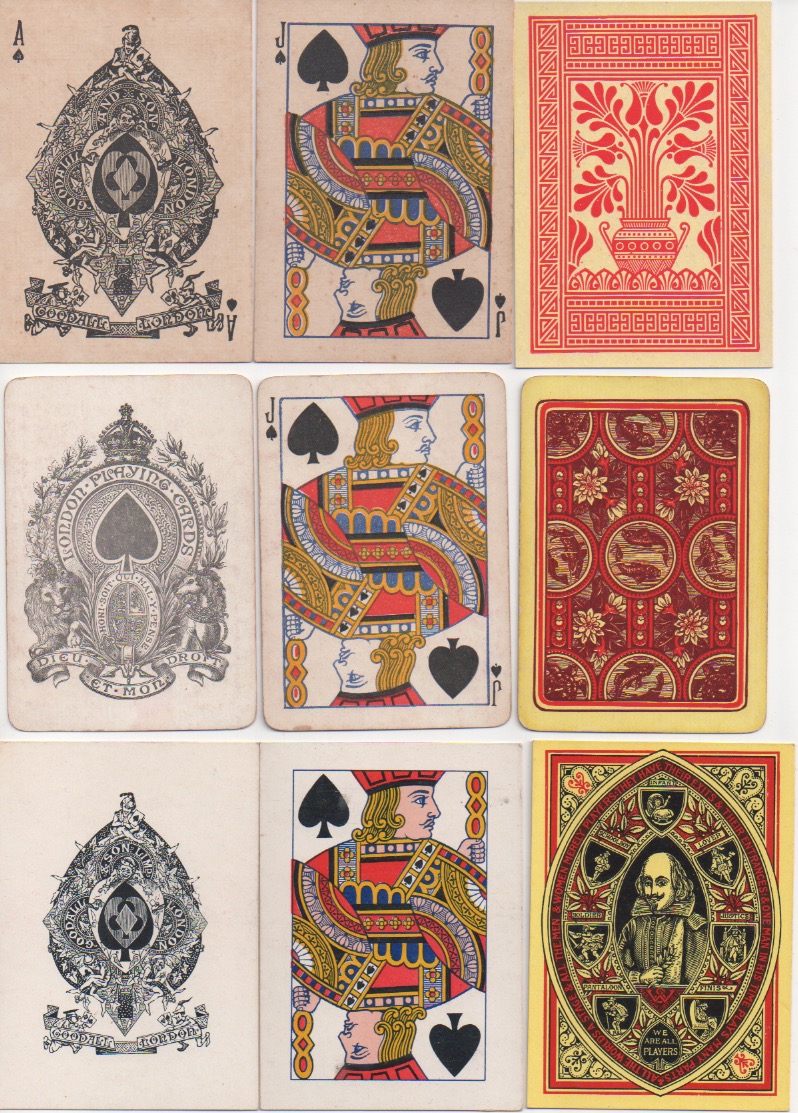