There are several more North European versions of the Paris 1 pattern. We saw the Runge design and its descendants in Hamburg and the Scandinavian variants. The Berlin pattern is the only survivor of this export drive in Germany today. But a number were developed in Belgium, some of which went elsewhere, too. In the eighteenth century the design, even when double-ended, was fairly faithful of the original. 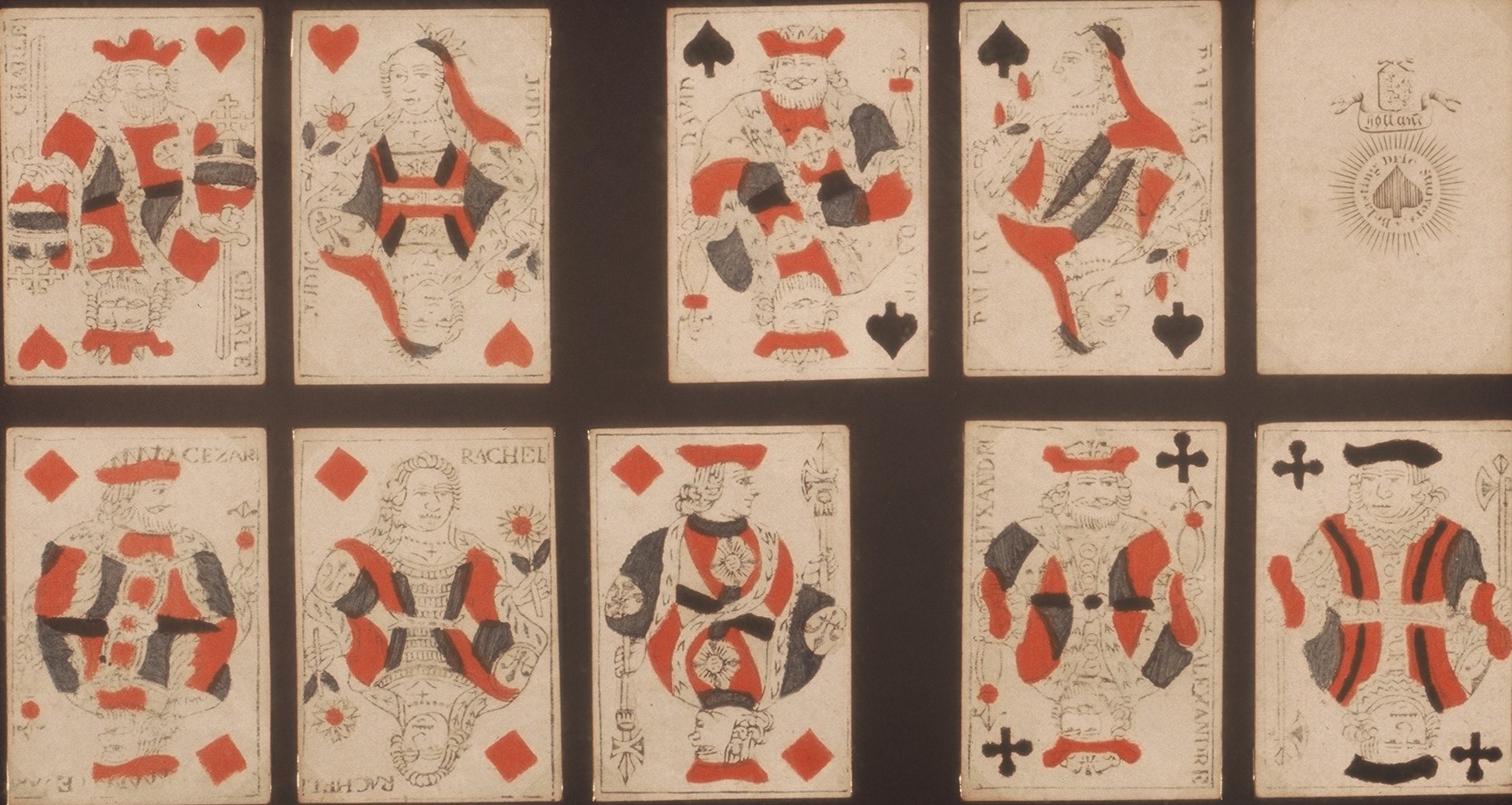 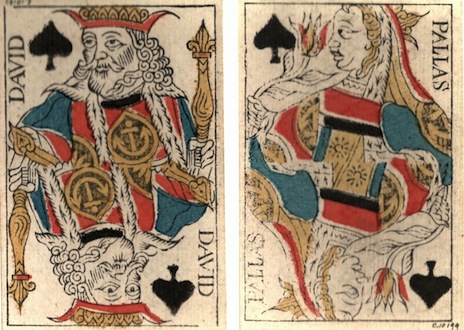 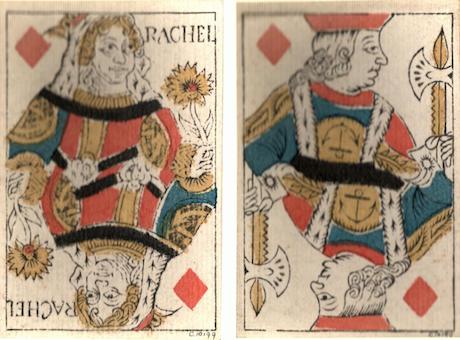 During the nineteenth century, though, the style changed and became less crudely drawn. There are several illustrated in Turnhoutse Speelkaarten, the catalogue of an exhibition held in 1983 written by van Autenboer & Cremers. By the 1850s the more natural figures had been established as the norm for Paris-related designs. Some of these were quite close to the original, others diverged in different ways. An early example by Servaes has a version in which the design on the JC's sleeve has been reinterpreted as a shield and this feature is perpetuated for quite a while. 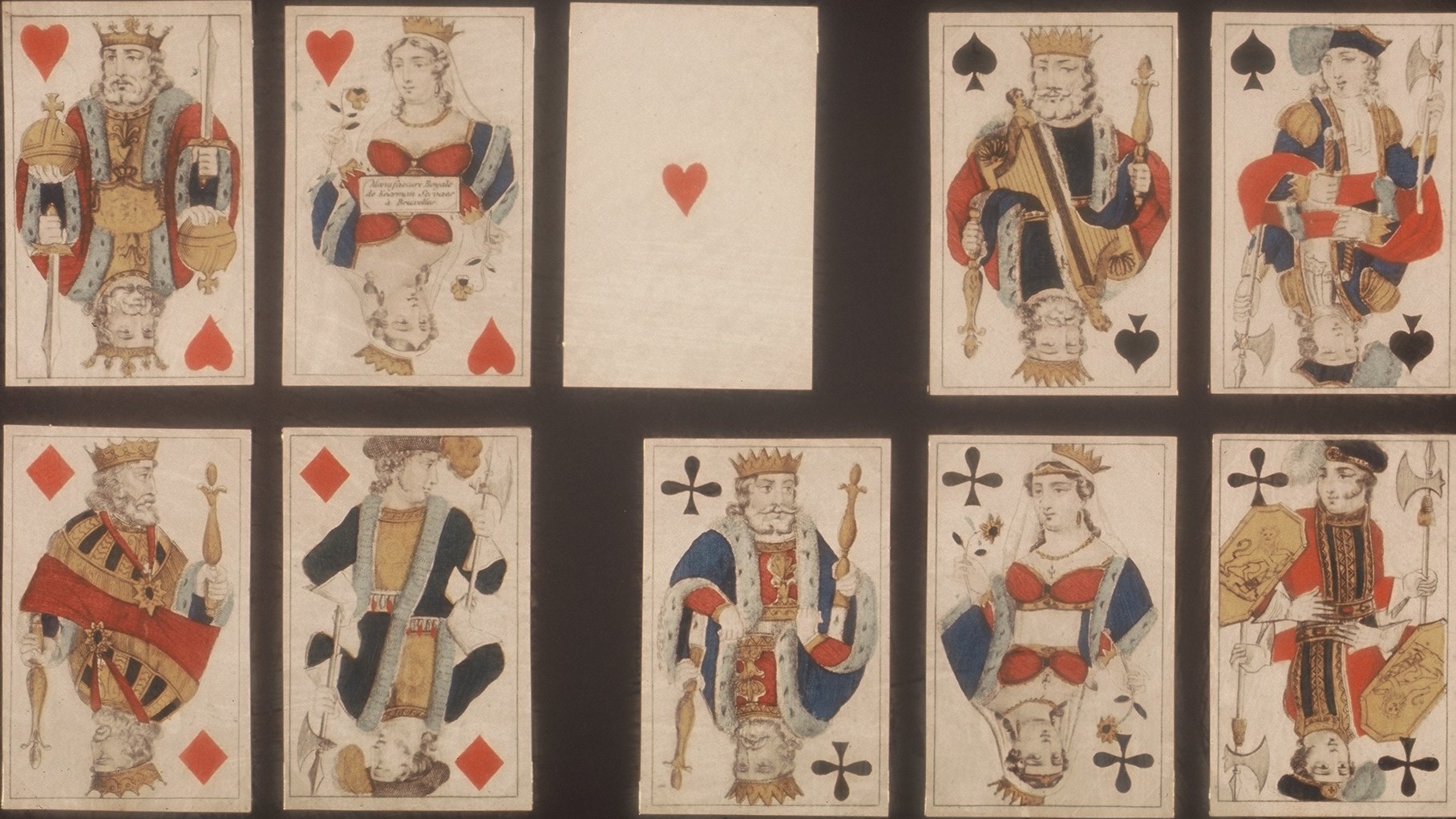 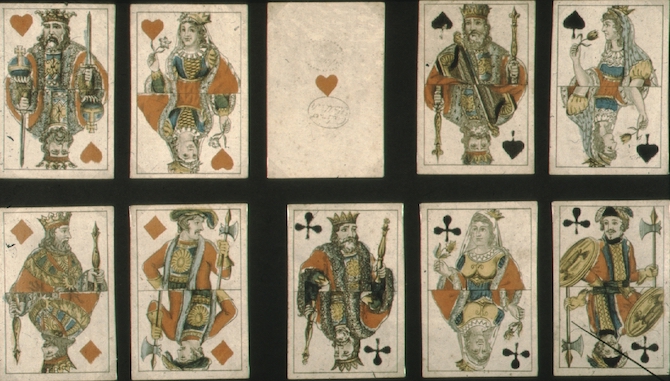 Russia had yet another version, more akin to the North German version illustrated on page 63 with three front-facing jacks, but a left-facing KD. 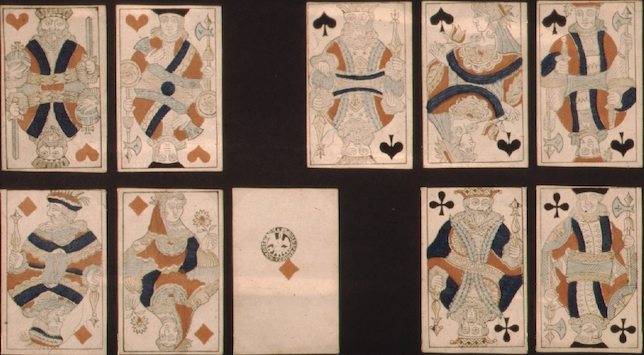 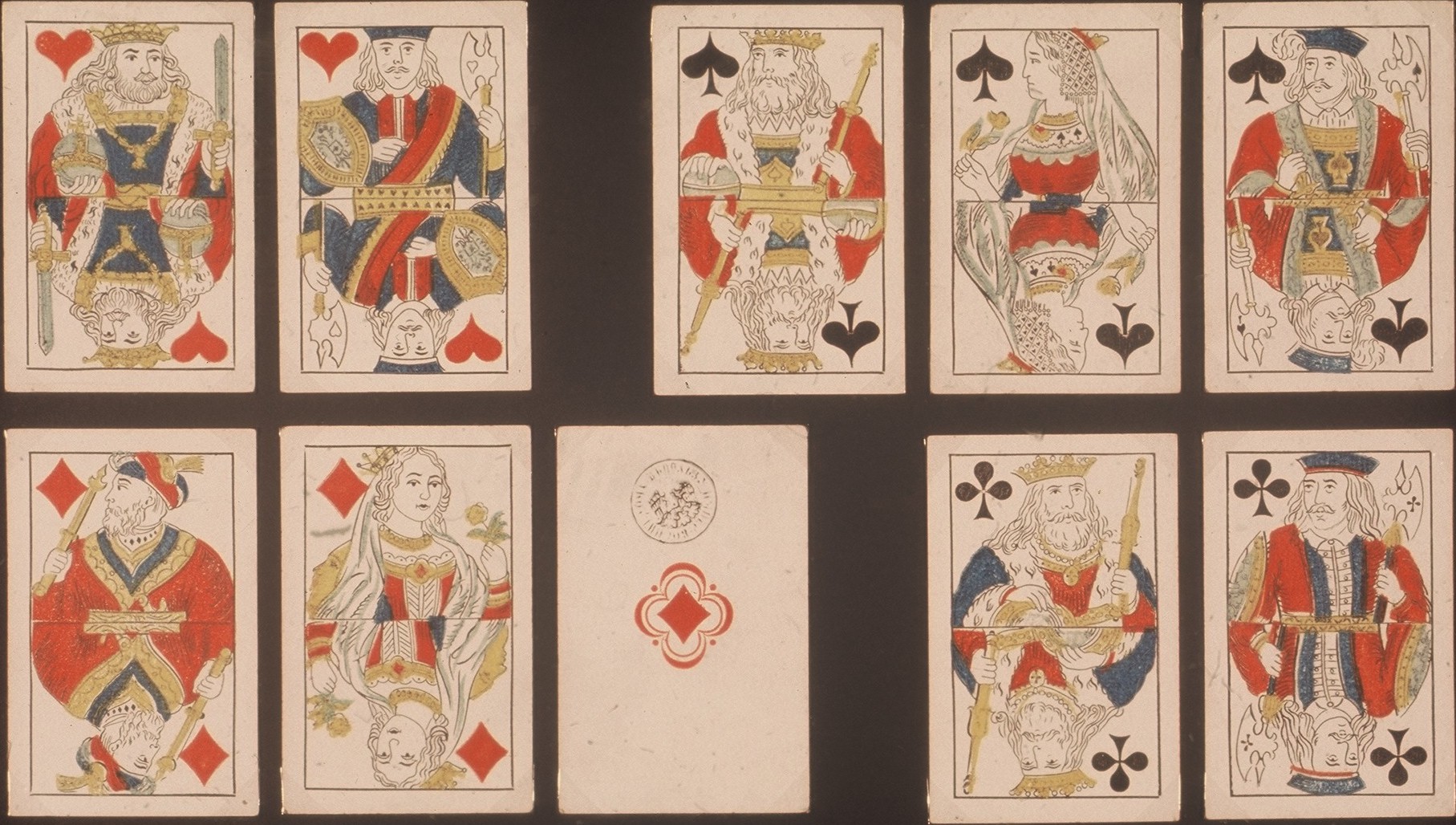 Russian, c.1885; the black jacks' heads have been turned slightly to the left.

During the second half of the nineteenth century more and more designs derived from the Paris 1 pattern were produced by the Turnhout makers. Many of these are illustrated in Turnhoutse Speelkaarten; all of them were given names, such as Cartes Royales, Bongoût, Cartes Italiennes, Cartes Turques, Sultan Kaarten. They mostly had pictorial aces, sometimes reflecting the name of the pack, e.g. Cartes Parisiennes had pictures of Paris on the aces. These names were not always applied to the same designs by each maker and some of them were really non-standard designs in the style of the standard ones, but with few or no standard characteristics, e.g. no profile courts, the courts of each suit facing the same way. Since the illustrations in the catalogue are all in black and white, which don't scan well, I'll simply give a couple of examples. 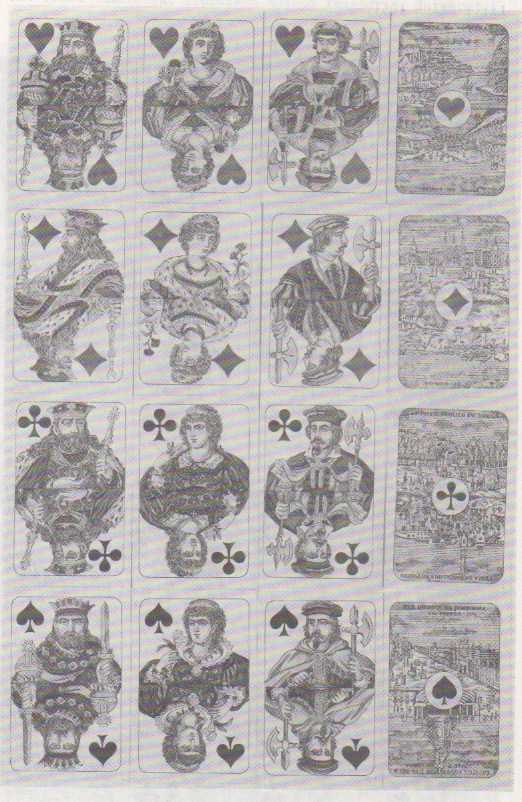 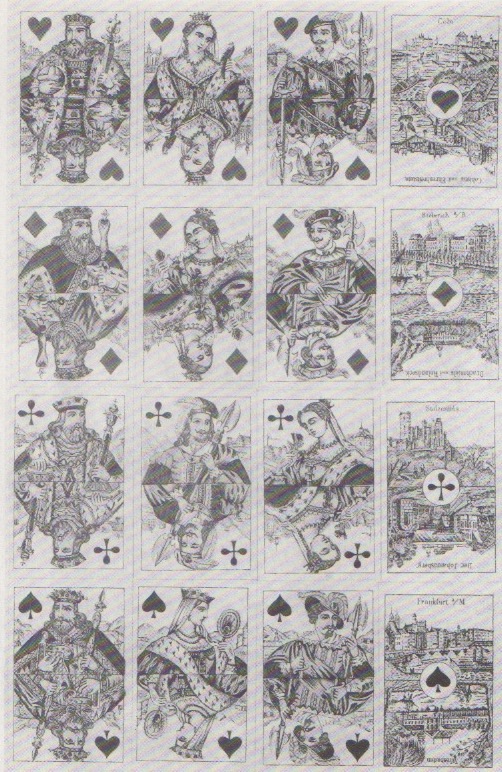 Van Genechten Cartes Royales, c.1895 In this examples the courts have background scenes, but this is the design that is now designated the Dutch standard pattern (without the background scenes). Note that there are several original characteristics, but the KD is no longer in profile and the QS faces right not left. The queens, in particular, have become decorative non-entities in relation to the earlier standard design and are the least standard of the courts. For instance, in this pattern the QH faces right and holds a bird on her left hand and the QS holds a fan rather than a flower.

Another Cartes Royales court set, possibly by Brepols, was offered recently on eBay in which the courts are even less standard and have been altered and mixed up in some cases, e.g. the KC holds a harp and looks more like the KD in the preceding pack. 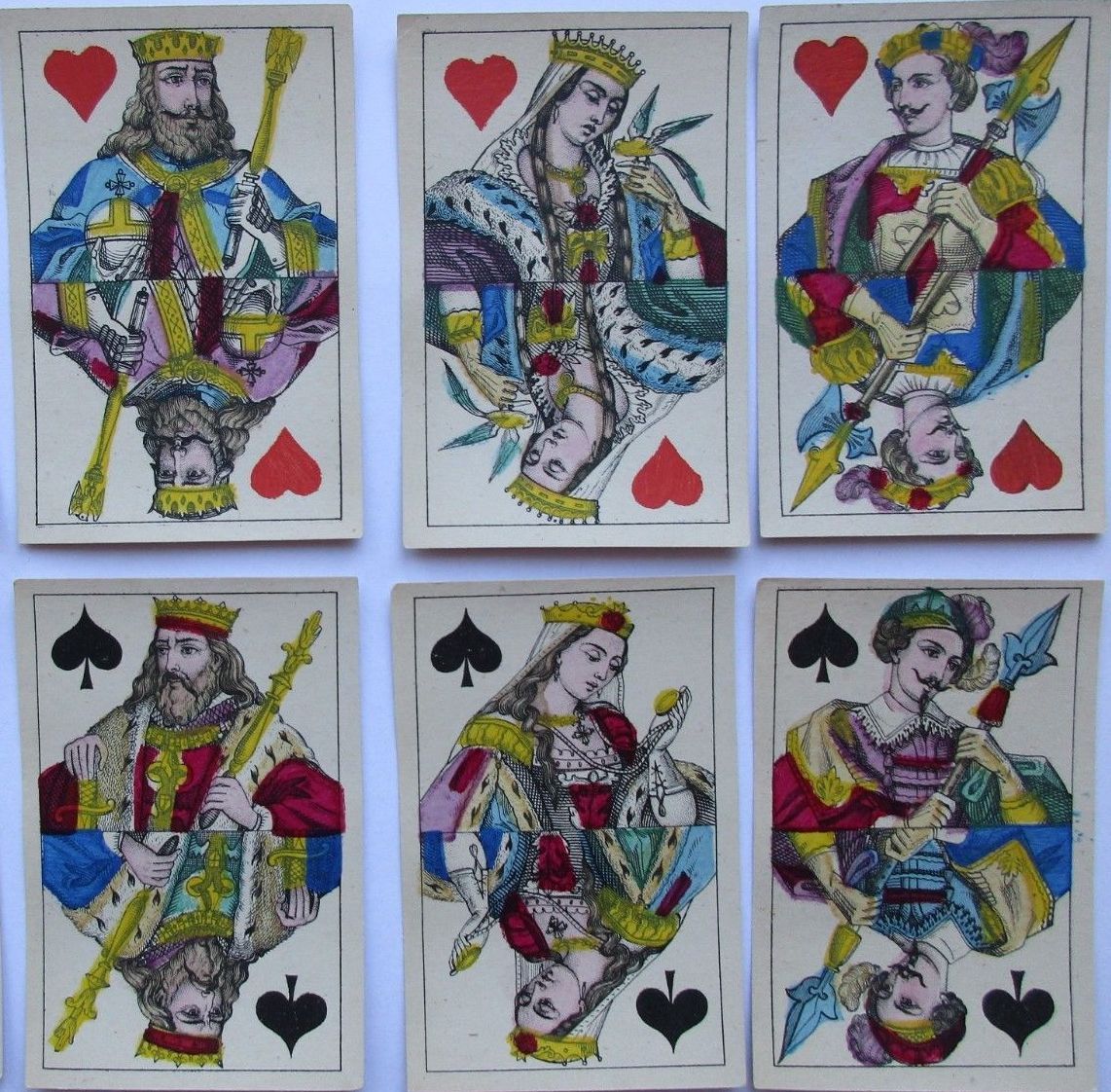 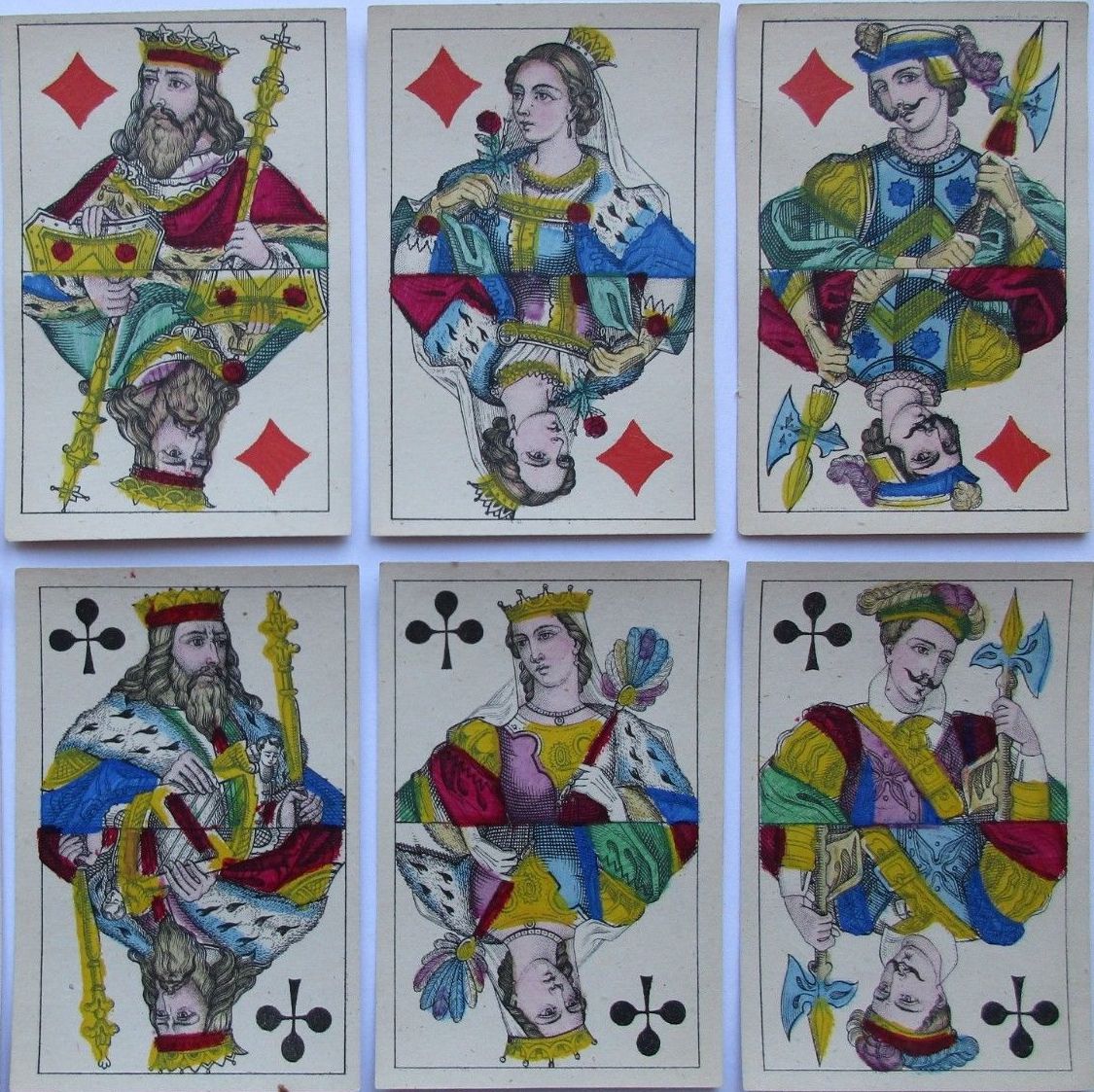 A late version of Paris 1 was still in production in the first half of the twentieth century: Biermans was producing the so-called Cartes marbrées (so-called because of the marbled backs) in the 1920s. 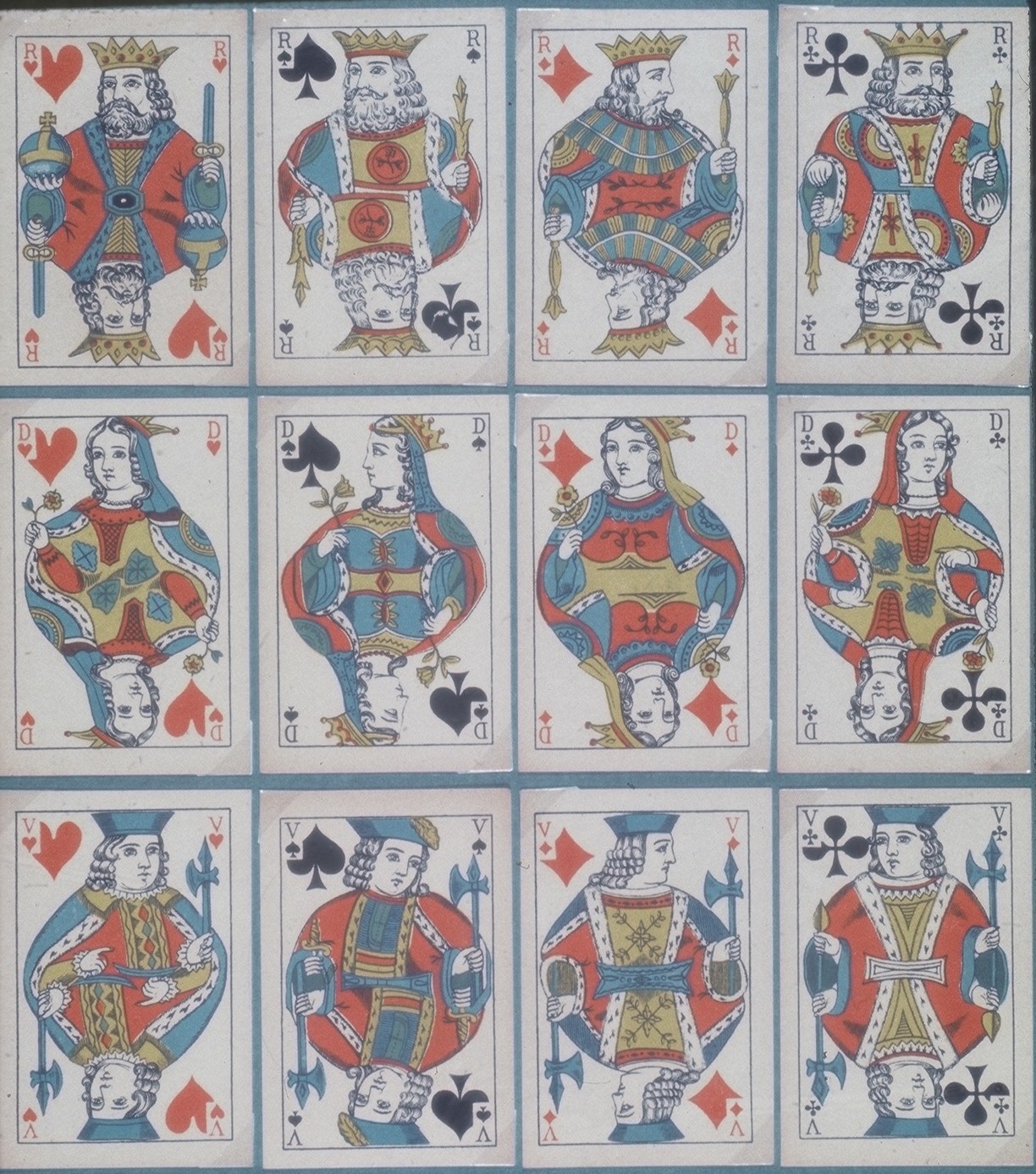 In Switzerland the Paris pattern was used in the French-speaking areas and made locally. 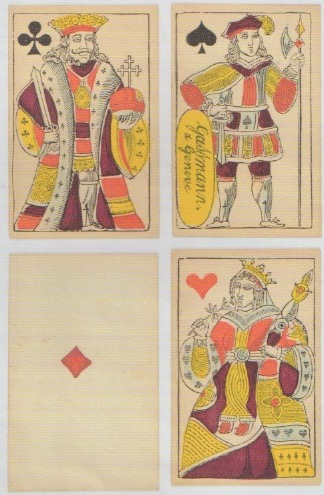 A Swiss version by Gassmann of Geneva, c.1860

By the twentieth century a watered down version of the original pattern was the usual choice for piquet packs. Again the queens have become particularly nondescript, though the QS is still in profile. 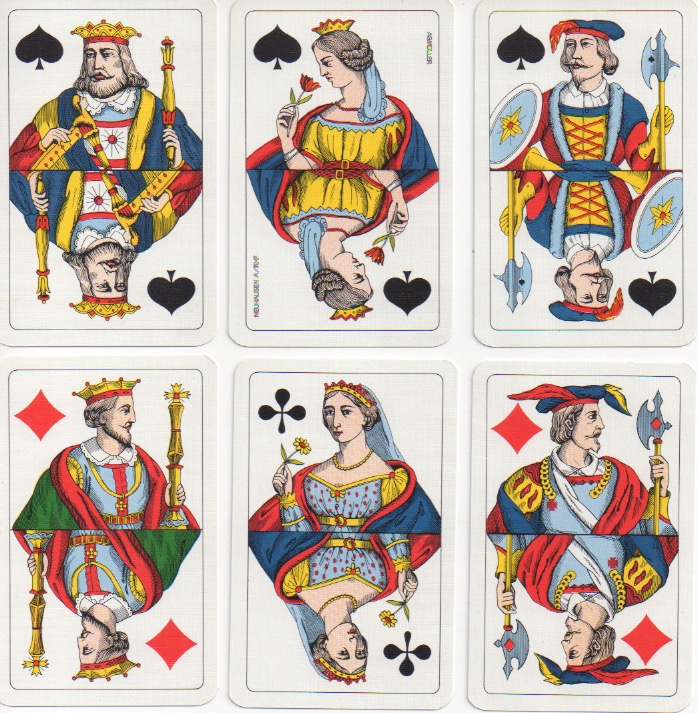 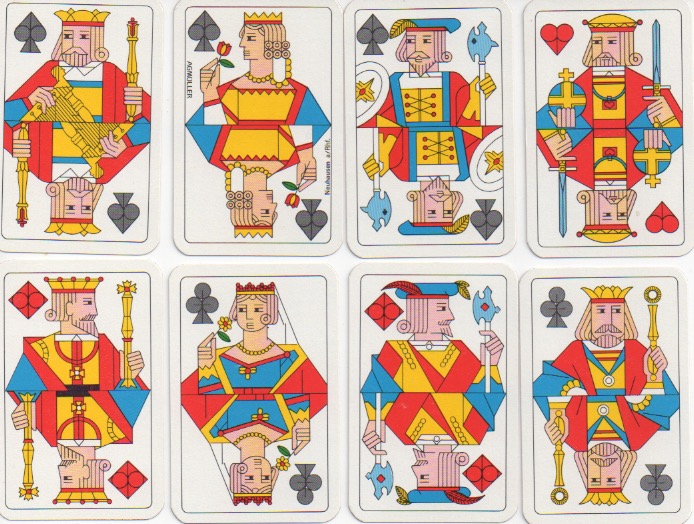 A modernized version in a patience-sized pack

In some non-French versions made locally mixing of the courts' suits has occurred in some cases. In a pack made in Madrid in 1811 shows considerable mixing: the KS is Paris 1 KH, the JH is Paris JD, the JD is Paris JS and the KH is rather nondescript. He could be the Paris KC without his shield or the Lyons 2 KH with a sceptre rather than a scroll. The QC is the Paris 1 QH and the QH could be a turned version of the same figure or the Paris 2 QH with a flower instead of a fan. The QS and JC are the original figures. 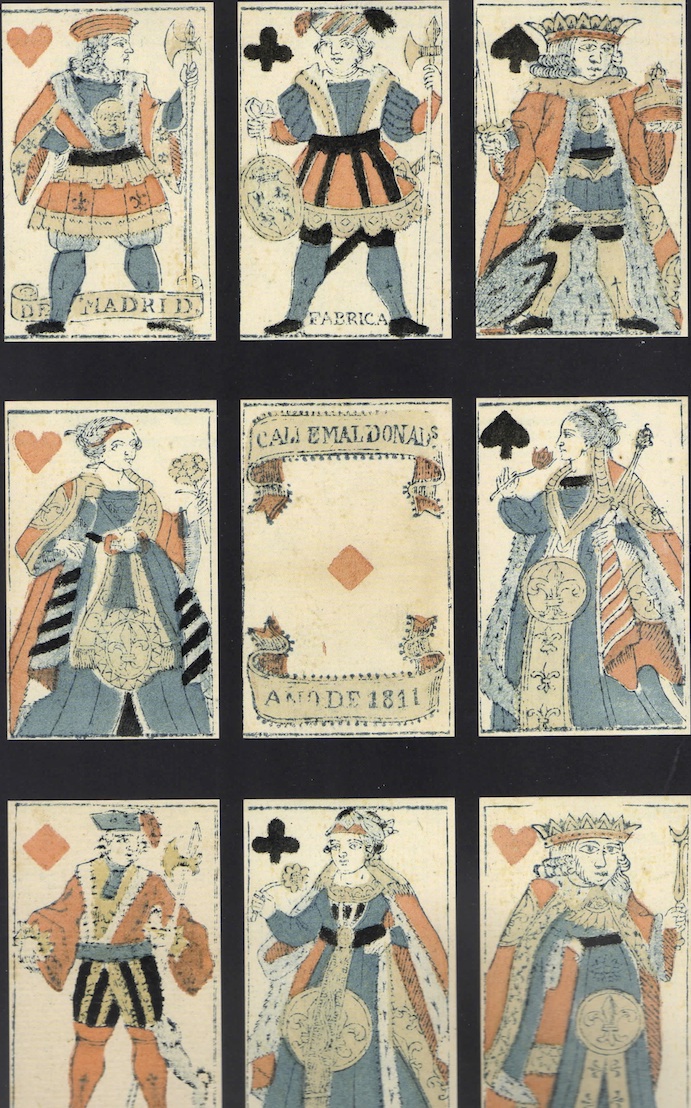 Similarly, there is a pack by Real Fabrica, Lisbon, from c.1800 with a mixture of Paris 1 and Paris 2 and an odd KS, who is actually the Paris 2 KD. The KC has been altered and has his right hand on a sword, the JH has no tunic and the QC is from Paris 1. 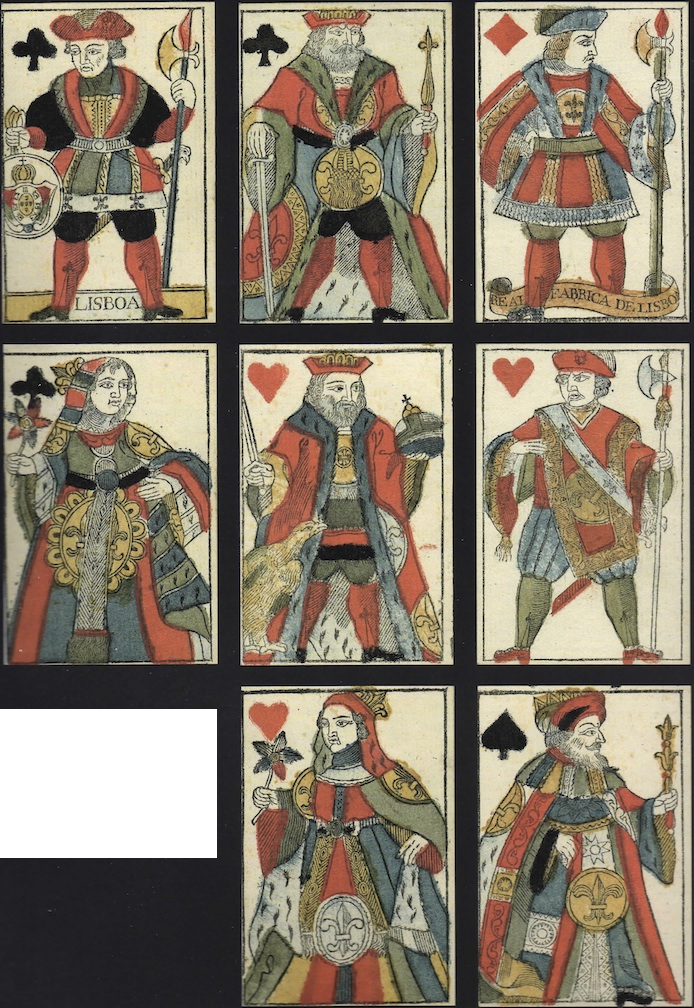 The standard Milan pattern has a number of French figures, but some are no longer traceable to a particular model. The KS = K1; KD = K4 holding a bird, but his head has been turned; QD could be Q2; JC = J1 and JD = J3. 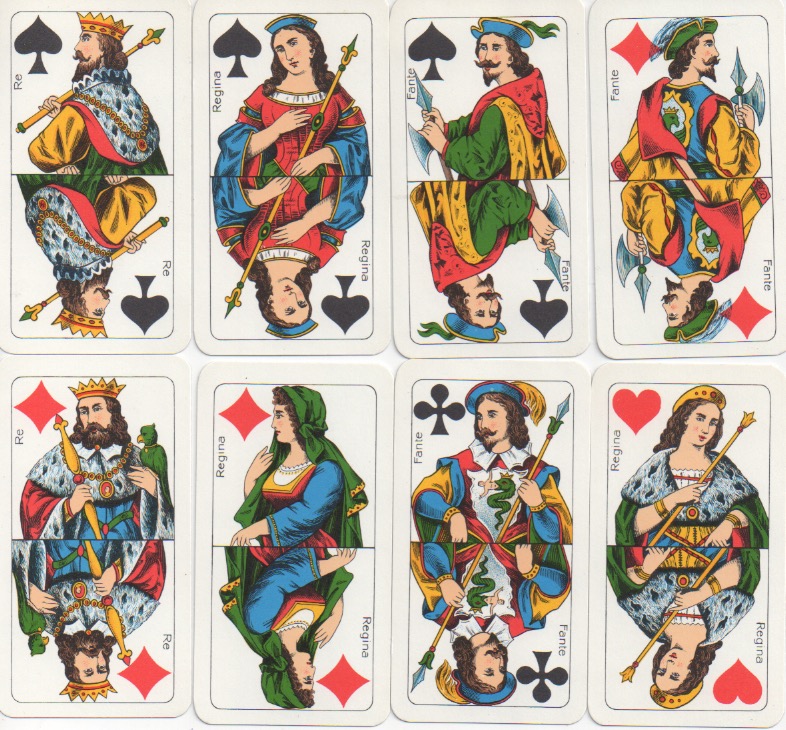 Several non-standard patterns from Turnhout have been copied elsewhere, but the best example of an in-house design that has become a sort of standard one is Dondorf's Rhineland pattern. The courts of each suit face the same way and there are a few hints of the French figures. It was copied in Turnhout with all the figures mixed up or altered in different ways by different makers and even Alf Cooke made a version for the Scandinavian market. 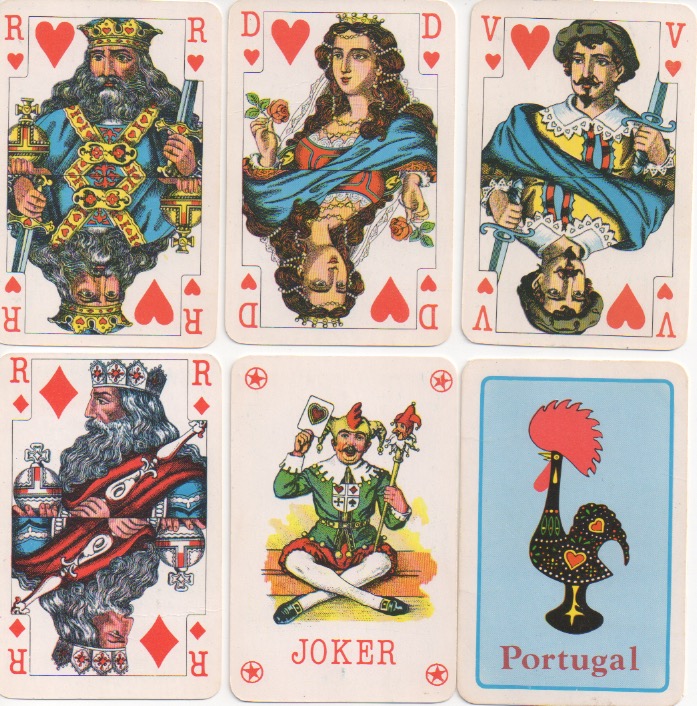 A version for the Portuguese market 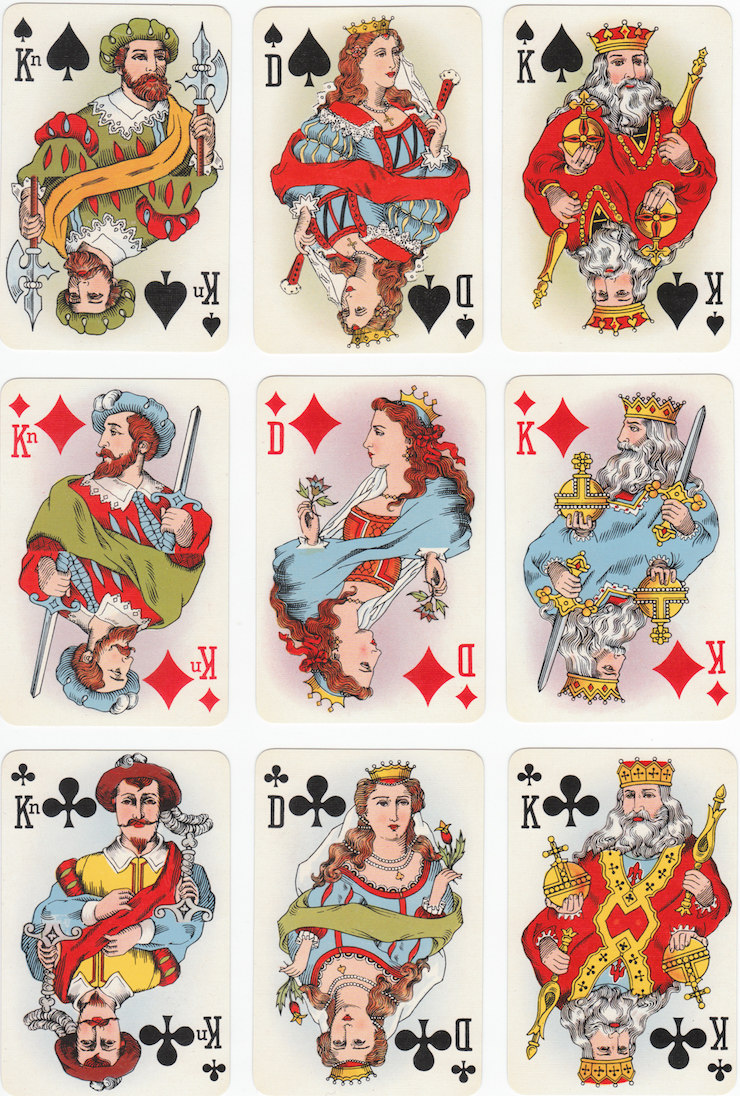 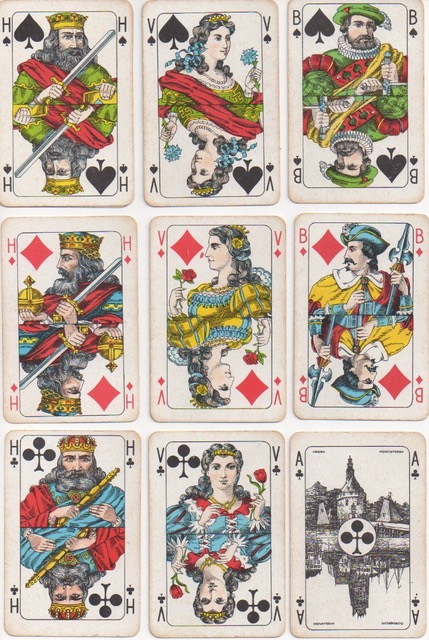 Finally, we can see how the regional French figures have inspired designers to produce their own version of them. Perhaps the first example is from Dondorf from the 1870s, the Birma Karte. These have been described as a version of the English pattern, but they are not. They have been given some characteristics of that style and a couple of the figures are found in the English pattern, but the courts are based on the regional figures we've been discussing here. (For a discussion of which figures are used, see my article in The Playing Card 45/2: 82-84.) 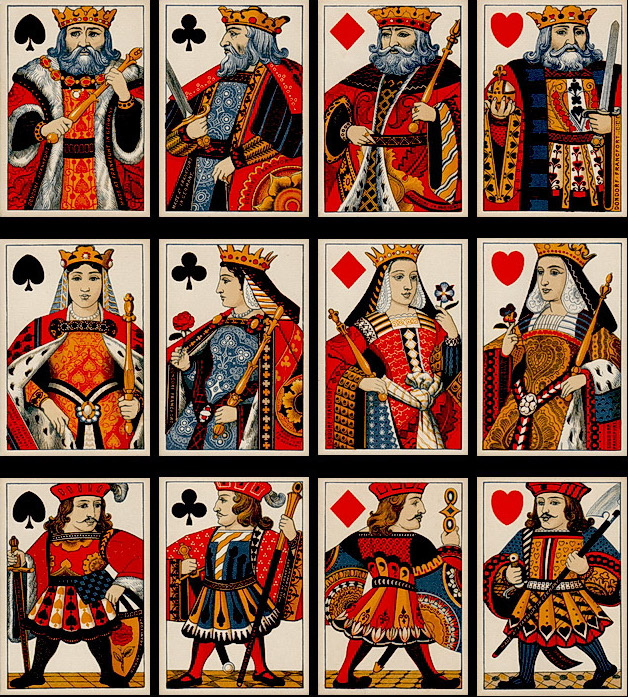 There is also a double-ended version made for Portugal, which has moved some of the figures around. 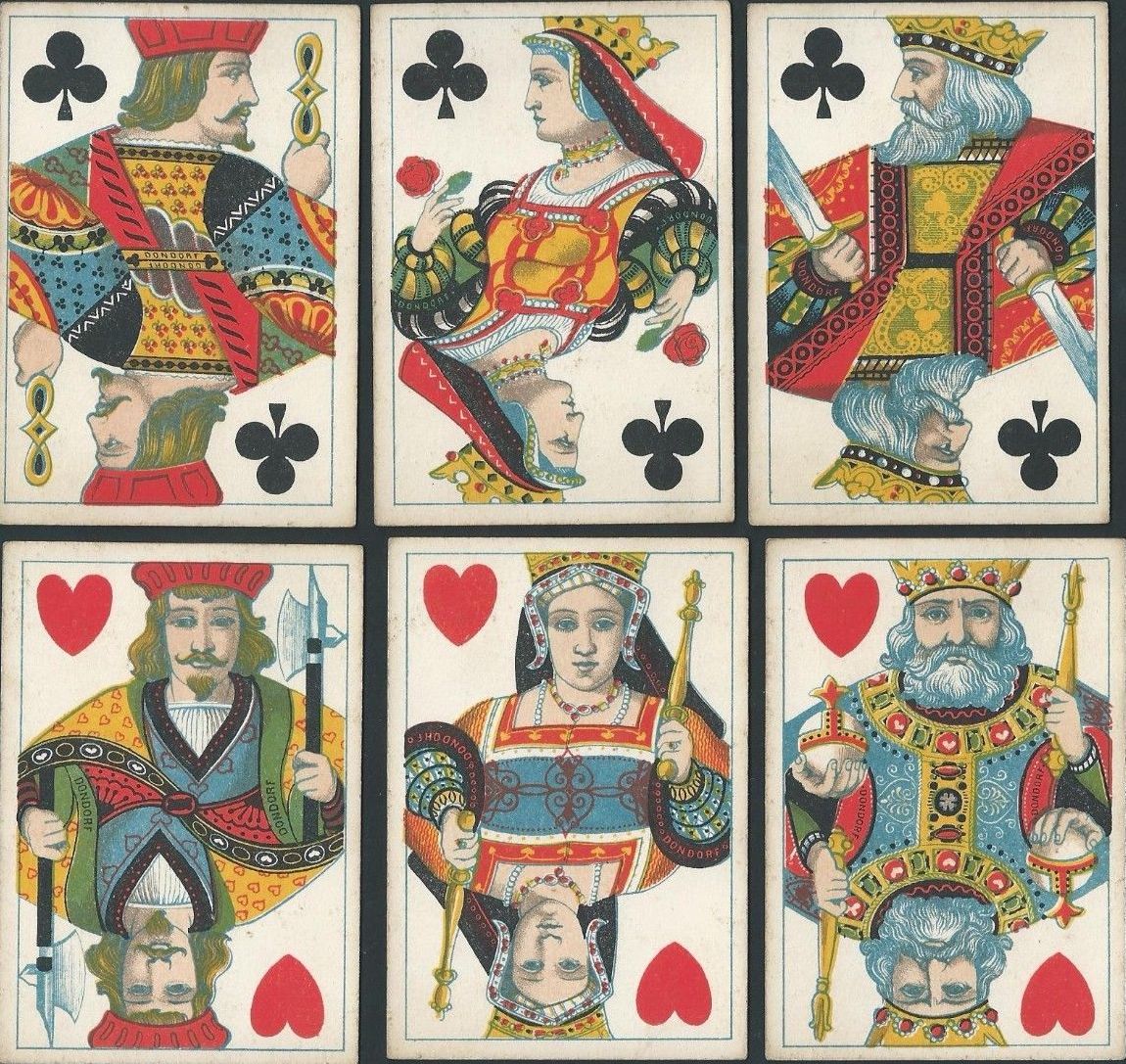 The design for Hermès by Cassandre from 1948 also draws on the regional figures for inspiration: the QC is the Paris 1 QC, the KH is K10 fully frontal, and the JH is J1. 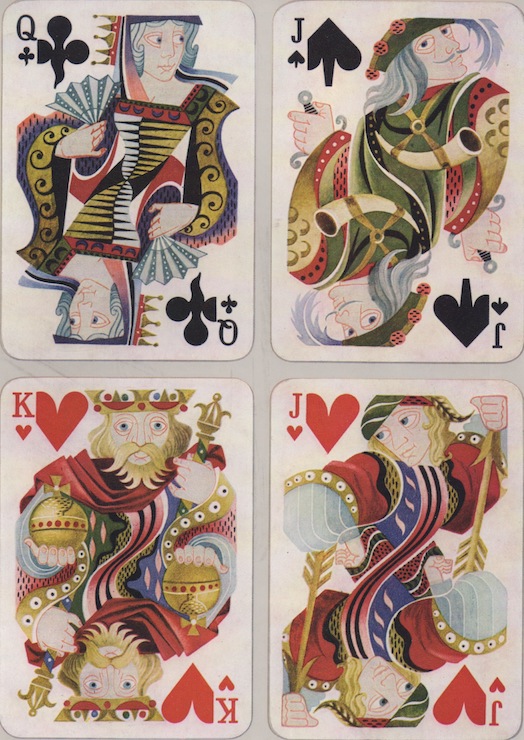 Similarly the pack for the Banque National. 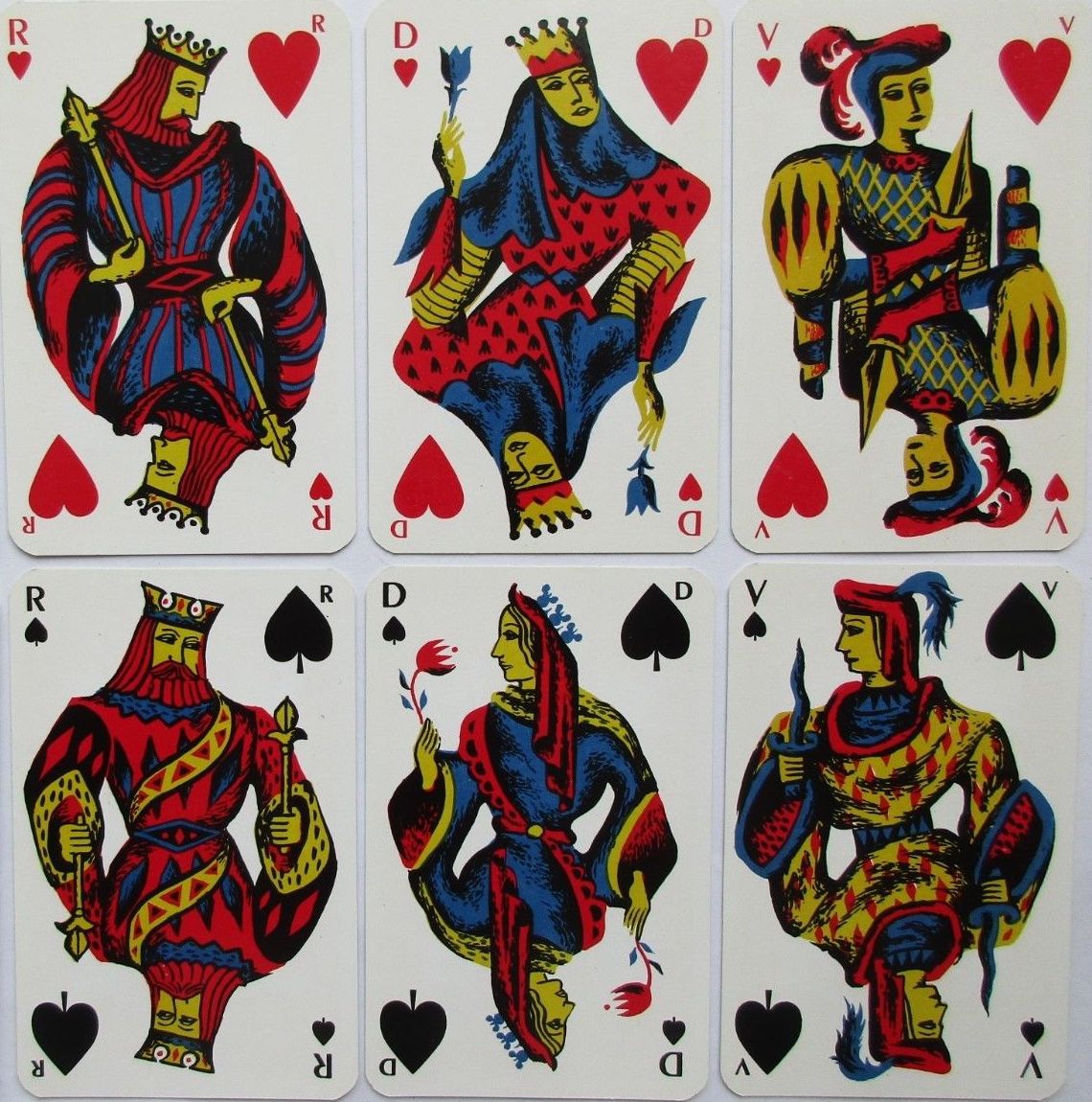 There are also packs by Miro (Ciel de France) and Draeger Frères (Classique), which draw on the French regional figures for their inspiration. 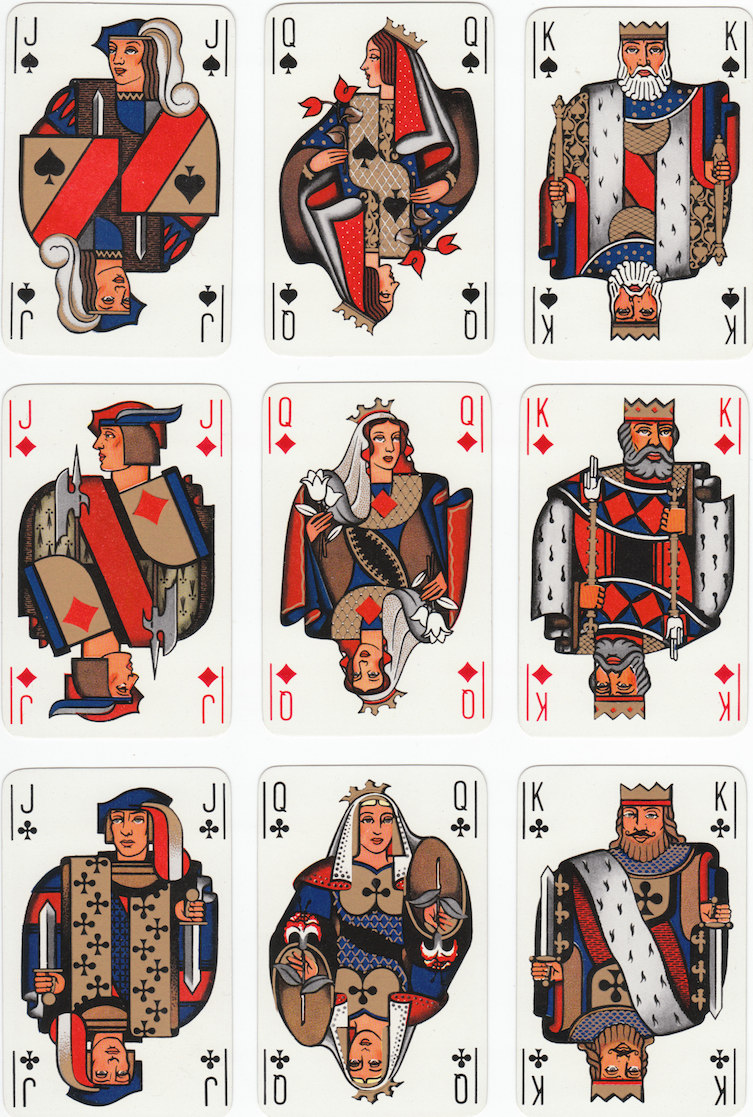 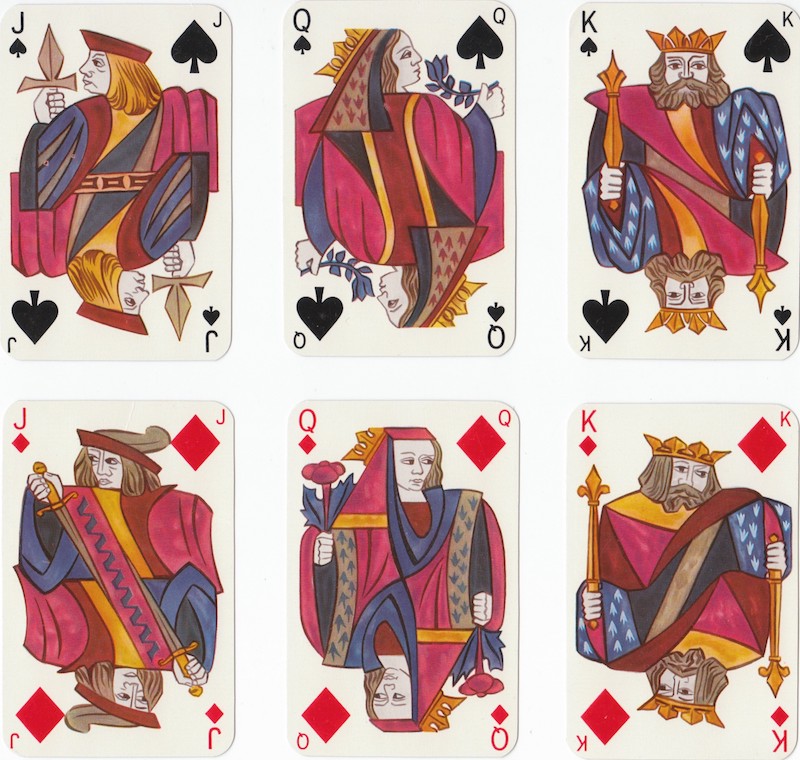 The last example is very recent: Rick Davidson's reworkings of the Rouen 2 pattern. 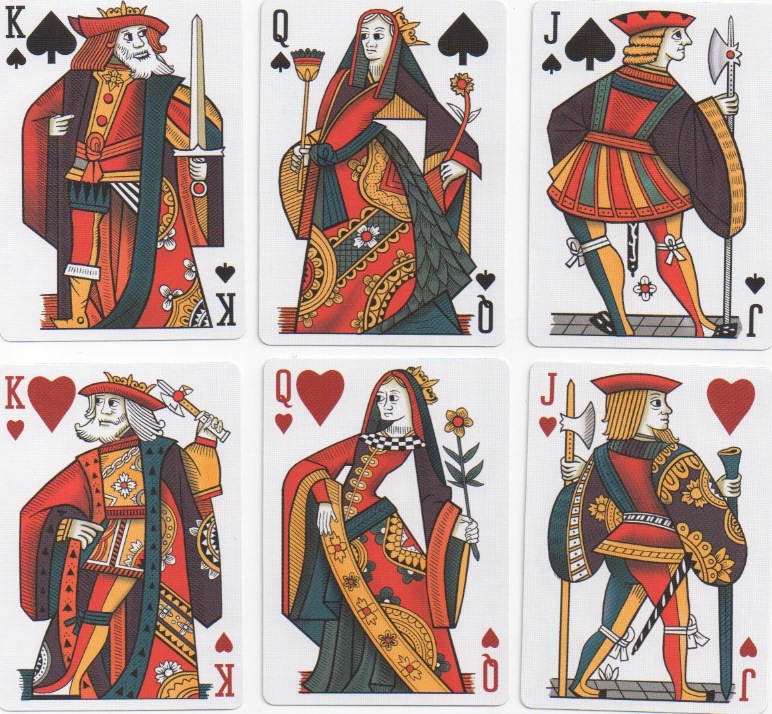