I thought it would be interesting to present some of the early references to playing cards in England. At the Bodleian Library, Oxford there is an online archive of newspapers: 17th and 18th Century Nichols Newspapers Collection, http://tinyurl.galegroup.com/tinyurl/9PygB7. Shelfmark Number: Nich. newsp. 57C; Source Library: Bodleian Libraries; Copyright Statement: © Bodleian Libraries, University of Oxford. There are fascinating descriptions of events from this period and many of the newspapers include advertisements for playing cards and announcements of the ban on imported cards introduced by Charles II and the occasional seizure of contraband cards. Some of the adverts relate to standard packs and others to the non-standard engraved ones such as those by Creake and Lenthall. The later snippets are from another online archive of British periodicals run by ProQuest. This is a large database with 59,893 items on playing cards, although this does include several duplicates and items on card-playing. Consequently, there is too much for just one blog page, so more will follow. I have also added some of the 19th century adverts for cards in the pages on individual makers.

To remind ourselves of the kind of cards that were around at the time, here's a colourful QH. 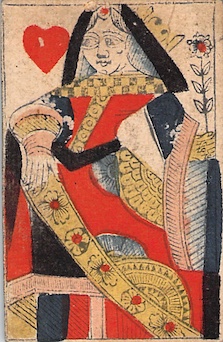 The earliest piece I found was the announcement of the ban on the importation of foreign cards. Because of the nature and size of the downloads I have had to take screenshots of the relevant passages in the text, so that sometimes a single text has had to be broken down into two or three pieces. 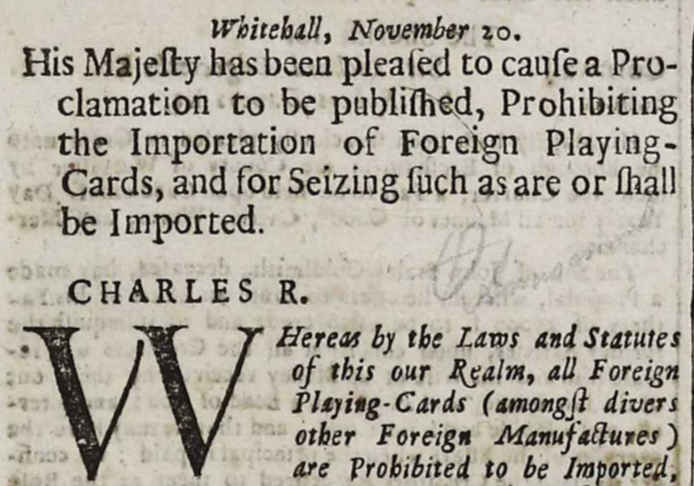 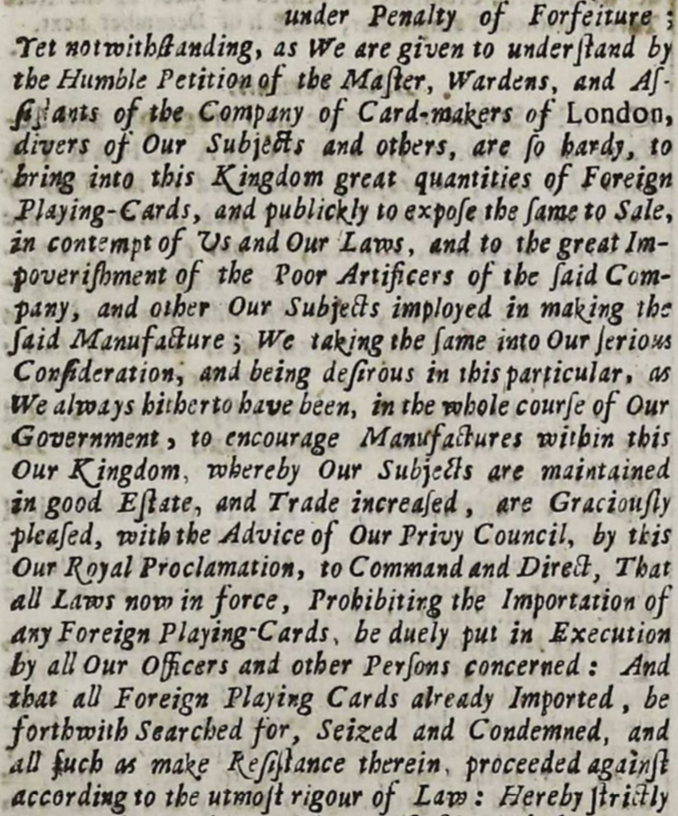 In the same year there is reference to a new office in London for sealing packs of cards.

Another similar notice is reproduced in a magazine of 1821. 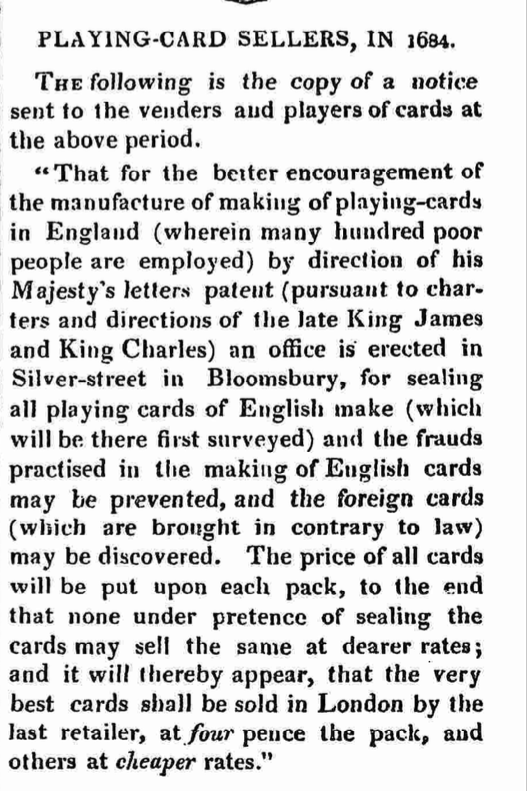 In the next year we find adverts for the cards of the maker Robert Whitfield, who was appointed surveyor at the new Office, both at the Office and at a public sale in a coffee house near the Royal Exchange. The latter advert lists different grades of card and gives the prices per gross. The grades are as follows: mattriss (the cheapest), fine mattriss, fine and superfine (the most expensive). Note that 'superfine' was retained throughout the 18th century and early 19th, presumably to indicate the top quality; it is stamped on the AC. 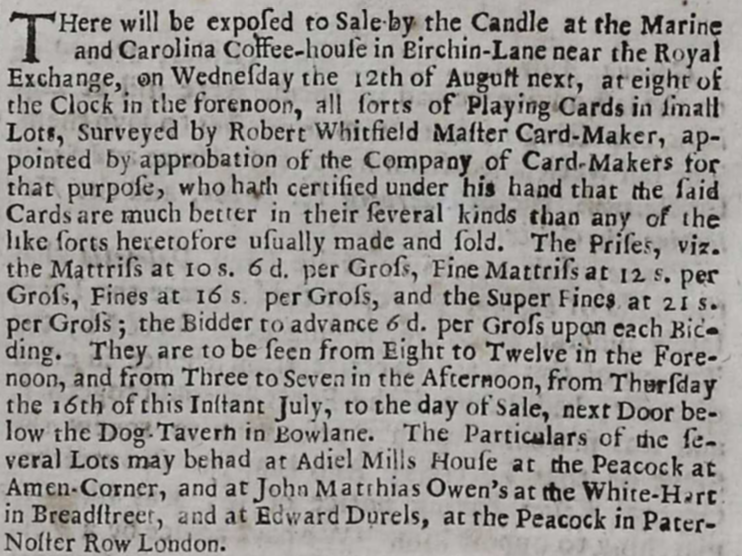 The next three adverts are for J. Moxon's engraved cards. The first one suggests that the cards appeared in 1692, unless this is a typographical error, as the newspaper dates from 1697. 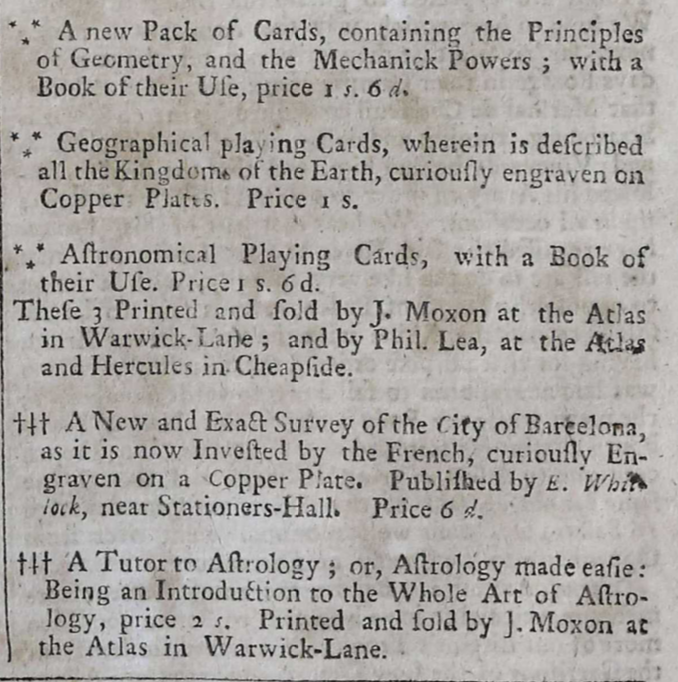 An advert for the Popish Plots pack. 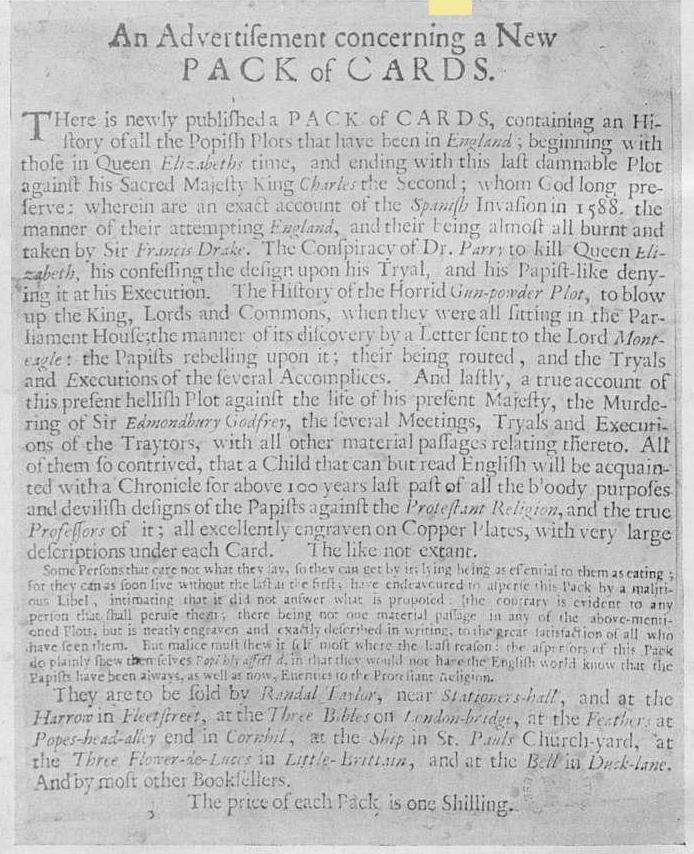 The new tax of 6d (sixpence) per pack was imposed by Queen Anne in 1711/12 and there are a couple of advertisements for the sale of cards at pre-tax prices, before the imposition takes effect. The first is for the cards of Archibald Vans (sometimes Vaus/Voss). Whether some of these are spelling mistakes, or whether he had a French name, which clerks couldn't spell, is not at all clear.

An early advert from just after the imposition of the tax.

One of many lists from John Lenthall, which appear in various years around this time. By 1721 the list contains only 12 packs rather than 21. 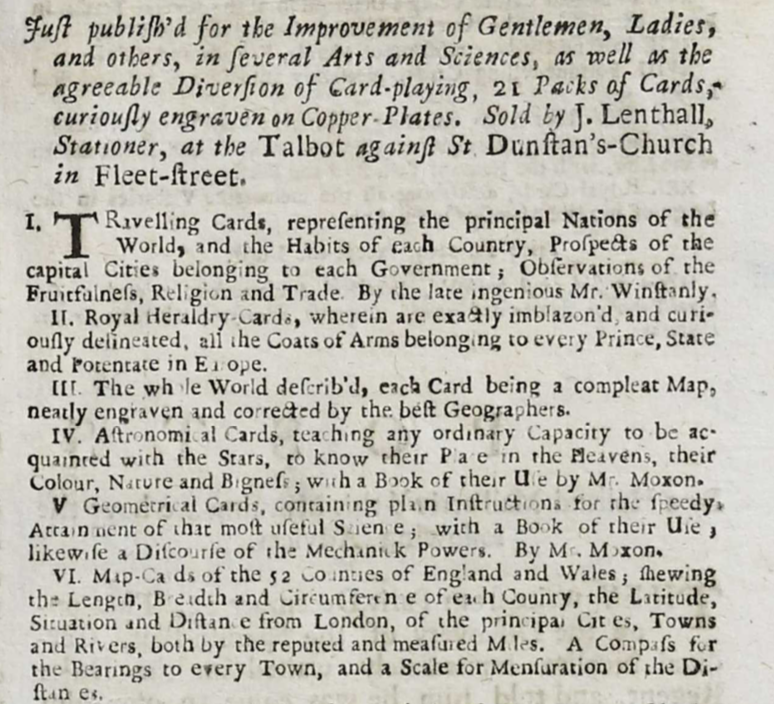 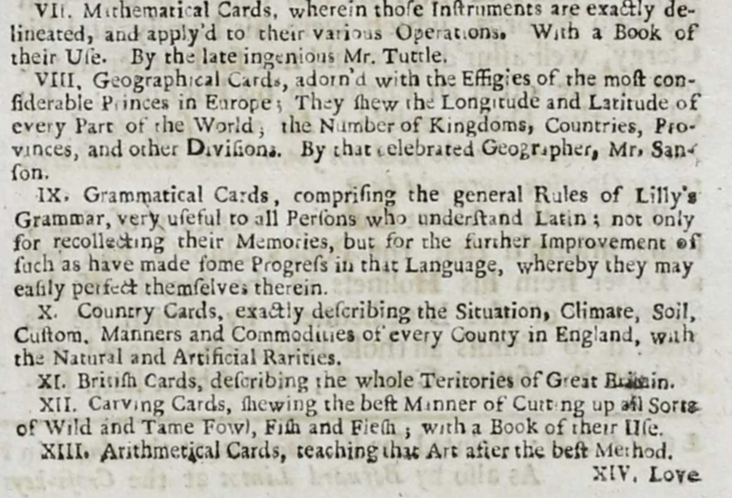 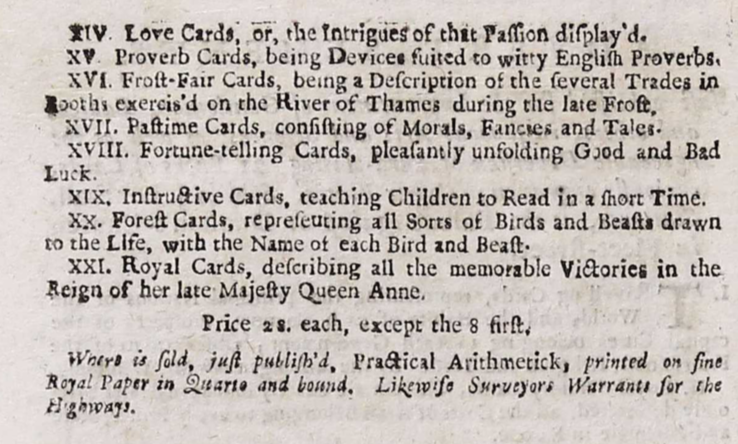 An advert for cards by Edward Warman. 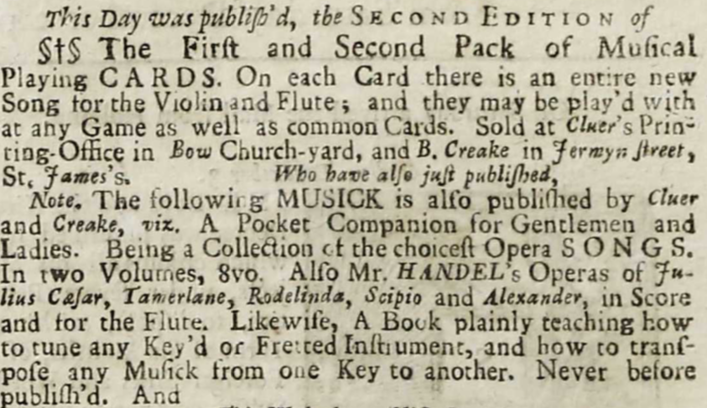 An interesting announcement of the seizure of contraband cards in Scotland.

A political cartoon was published in this year using the court cards to represent rulers and countries. The hearts represent Britain (QH = Britannia). All the courts have been printed the wrong way round. The yellow marks are from the online image, as I have used the search words "playing cards", so each occurrence is highlighted (inaccurately in places!!). I don't know how to get rid of them in this and subsequent texts. 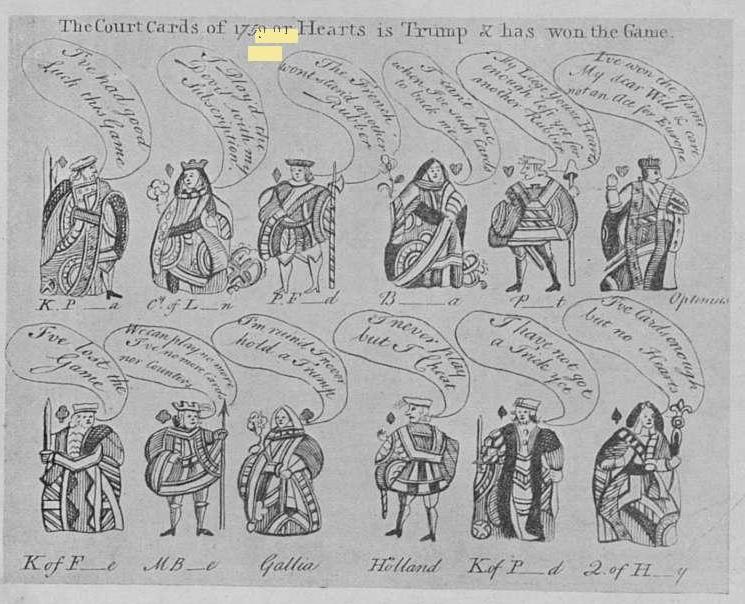 The last two examples from the 18th century come from the British Museum. I'm most grateful to Mike goodall for sending me photocopies of them. Note the reference to piquet (picket) and ombre (quadrille) packs in the Turner advert (1744-50): these had 32 and 40 cards, respectively, the latter having no 8s-10s. 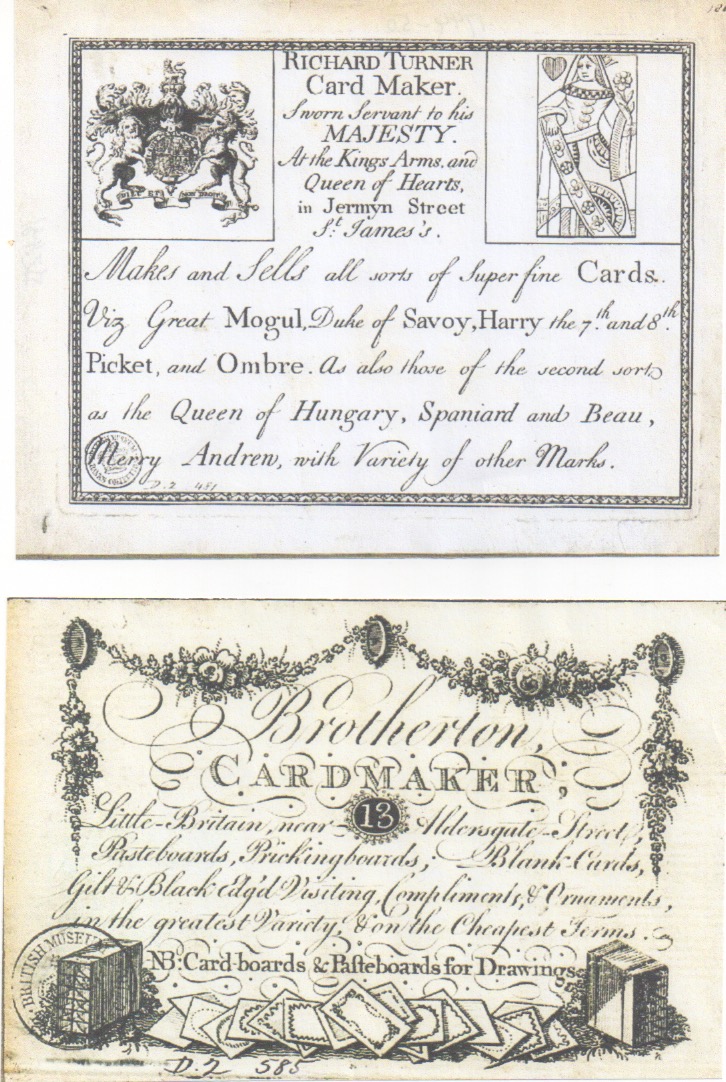 An announcement for the new Ludlow's Knights Cards. 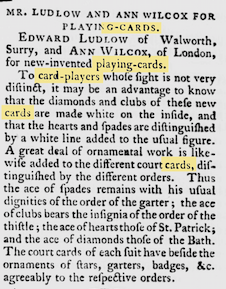 Around the same time there is a wrapper from Thomas Wheeler, the maker of the Ludlow cards, in the British Museum (again thanks to Mike Goodall) on which it clearly states that he was apprenticed to ("from") Gibson. Sadly, the address is difficult to read. 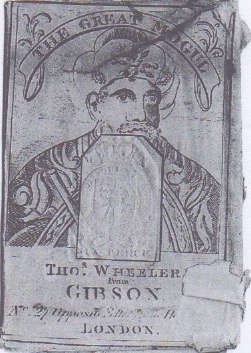 A description of a novel non-standard pack. The first part of the text is rather rambling and is about card-players rather than the new cards. I wonder if they were ever produced. 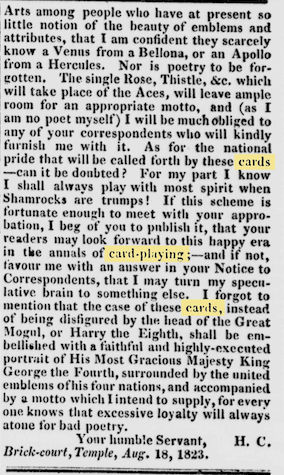 Here is an account of the case against Henry Wheeler, who was sentenced to transportation in 1838.

In the same year there are advertisements for secondhand cards sold by Mudie's; the first is from June and the second from December. Note the reference to double-headed cards ("antipodes"), which are probably imported from Europe at this time. 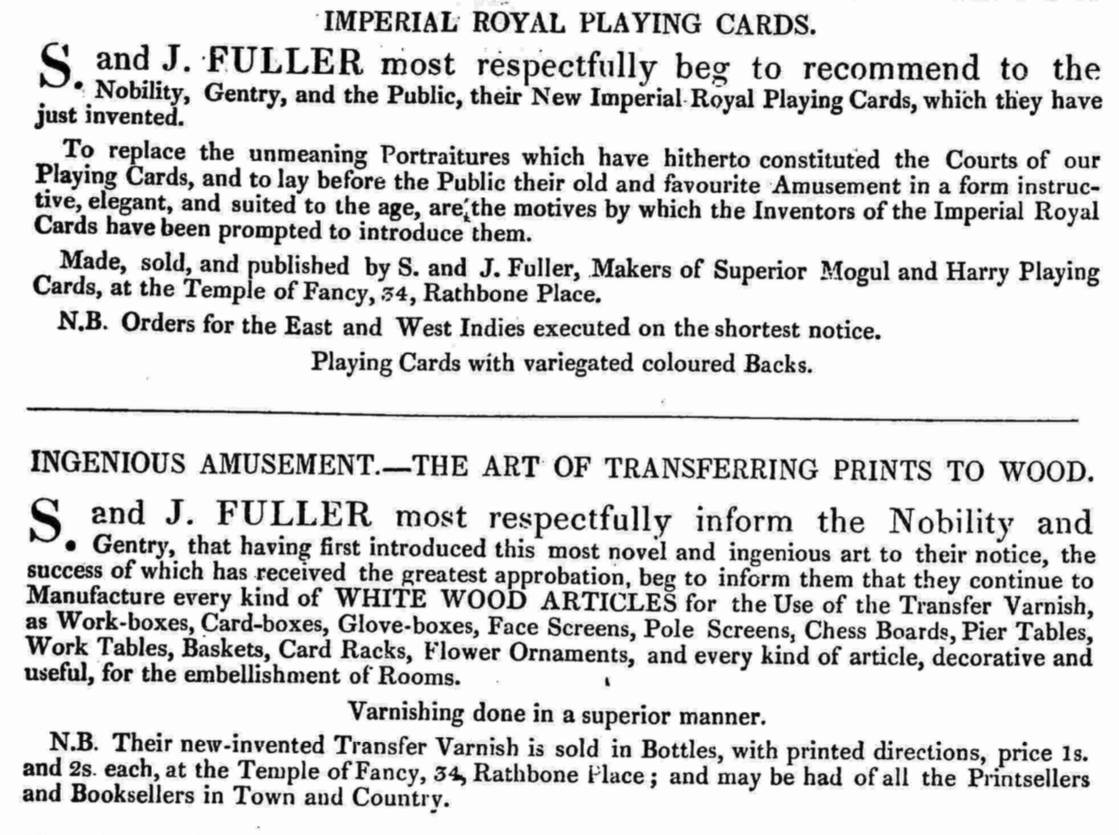 An early De La Rue advertisement, as the firm only started selling cards in that year.

There are few adverts for Reynolds cards around this time: this one has an interesting reference to the design of the backs. 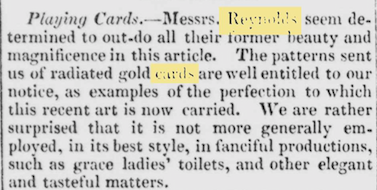 The journal Once a week published a historical survey of the taxation of playing cards in Britain in January 1864 in the wake of the reduction of the tax from one shilling to threepence. 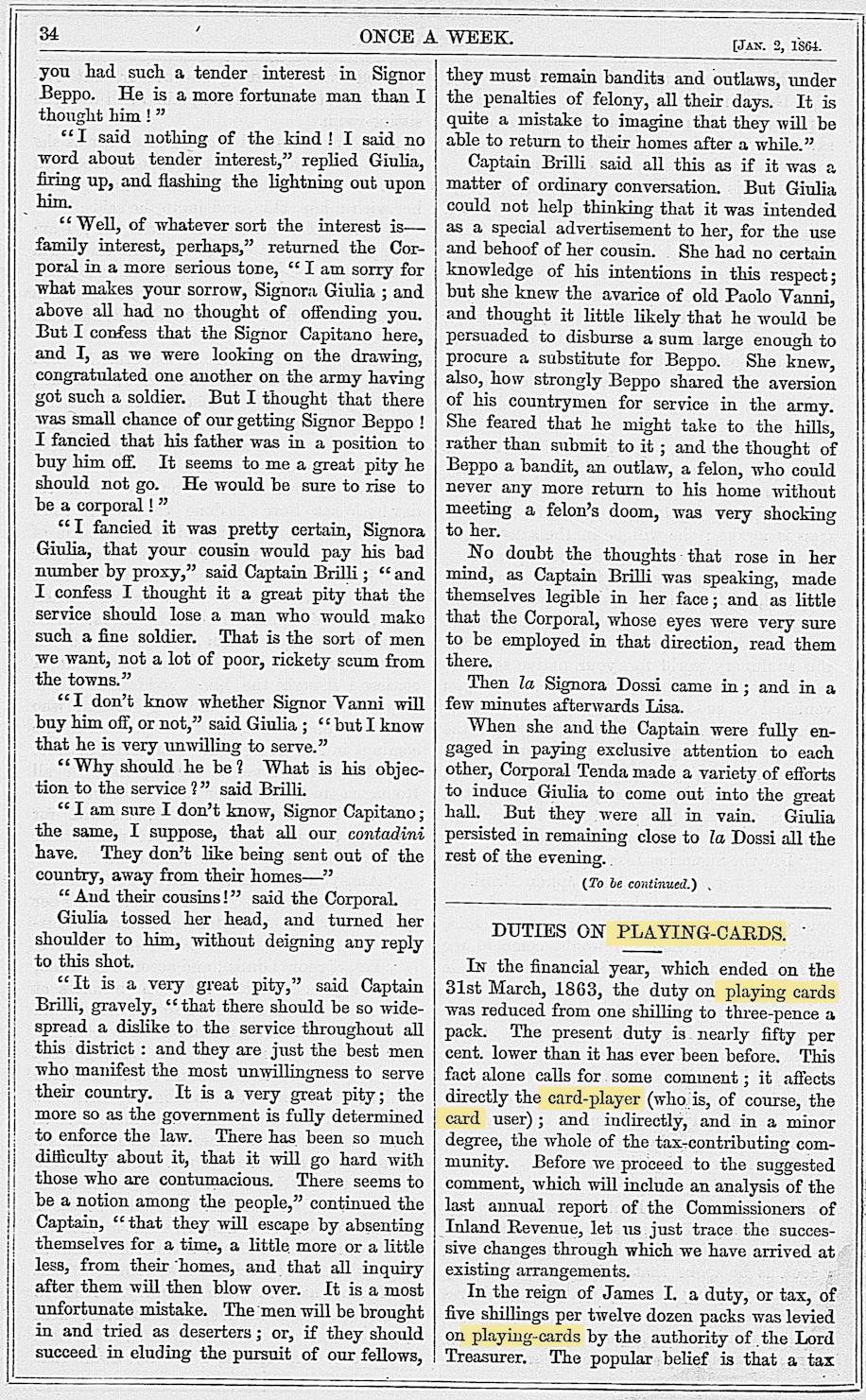 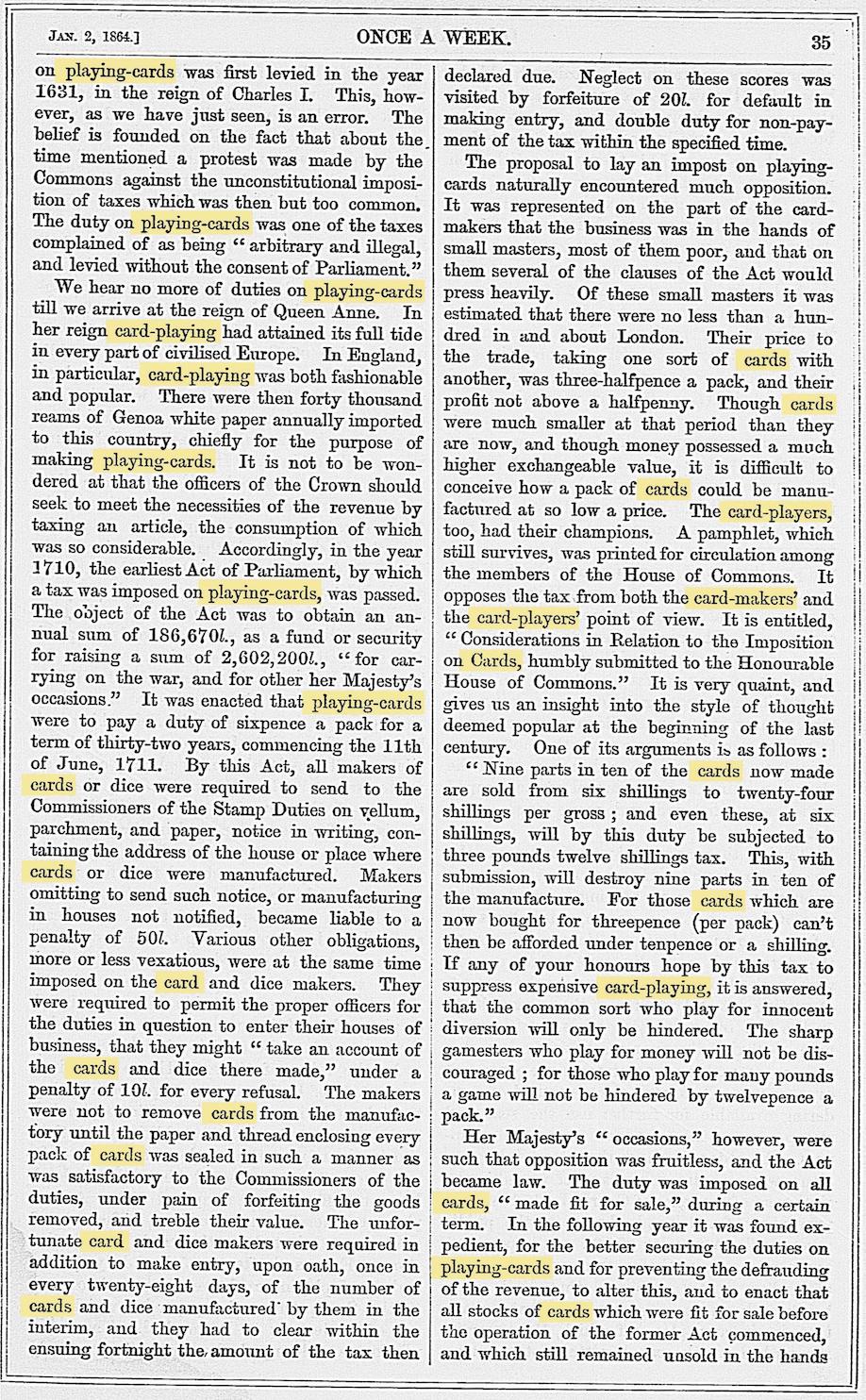 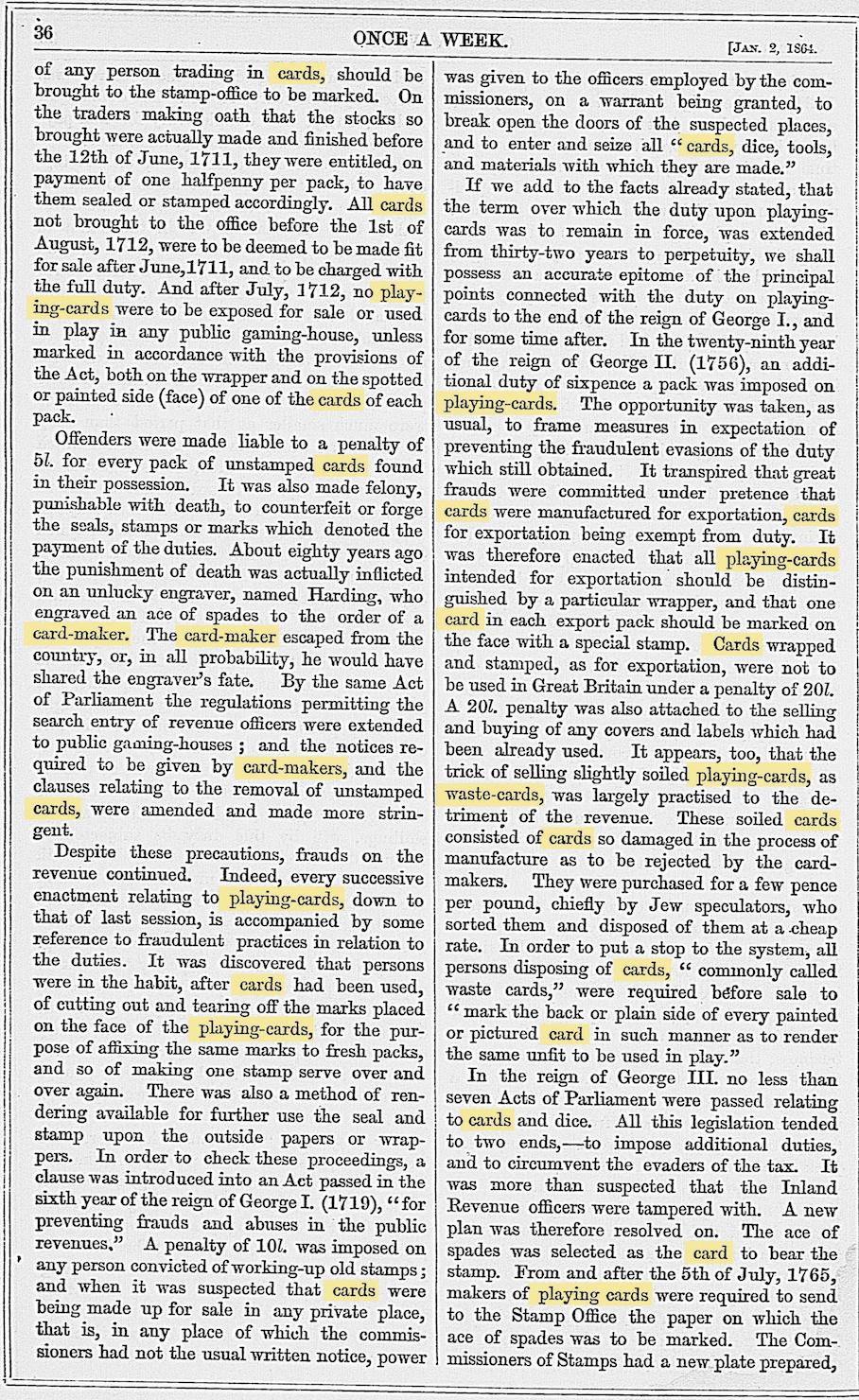 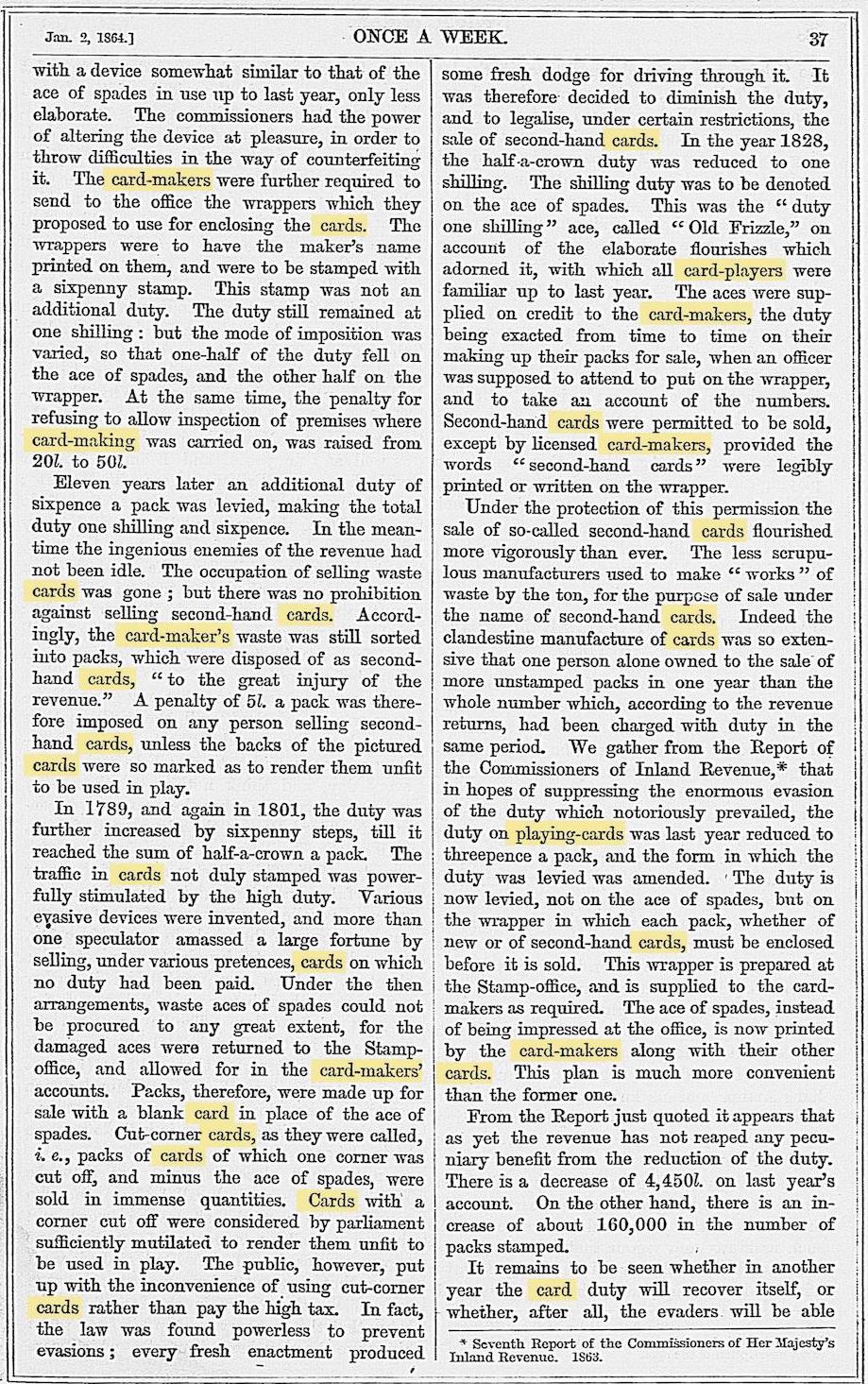 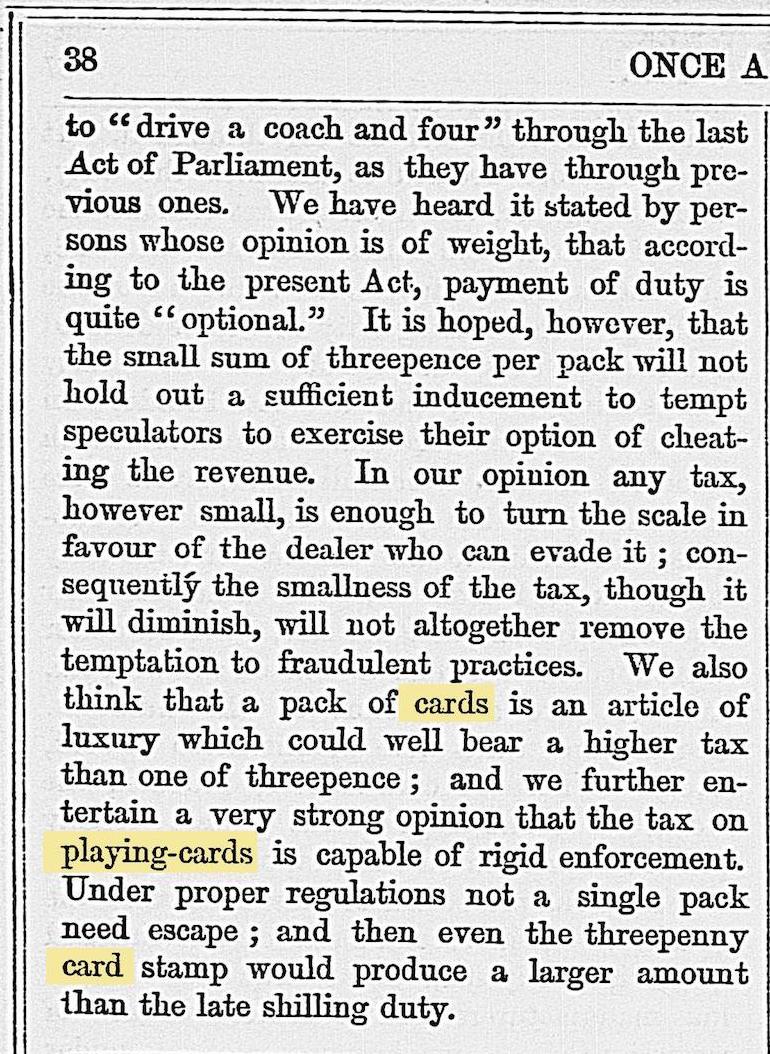 Review of De La Rue playing cards from The Field.

In The Athenaeum a Mr J E Gray suggested that it would be more convenient to have all the pips on the left of the court cards. Whether this was a spur to card-makers to follow this suggestion we don't know, but by 1875 turned courts were the norm. James English had been using turned courts since he started printing cards in 1865. 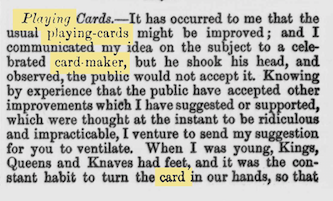 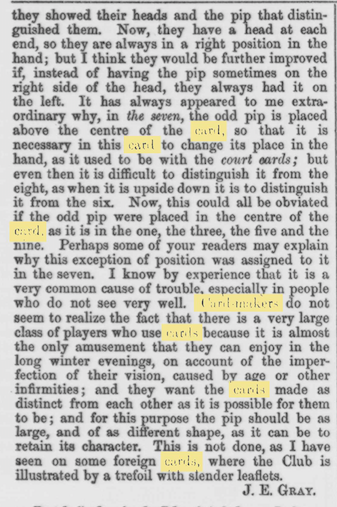 Review of Grimaud playing cards from The Field. 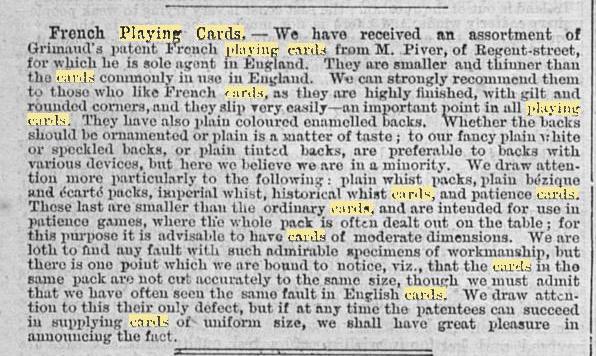 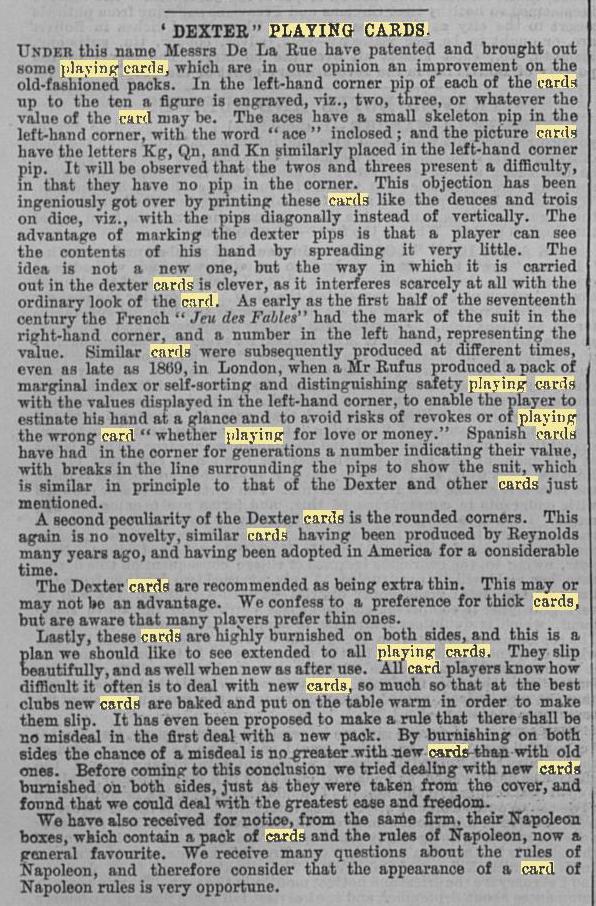 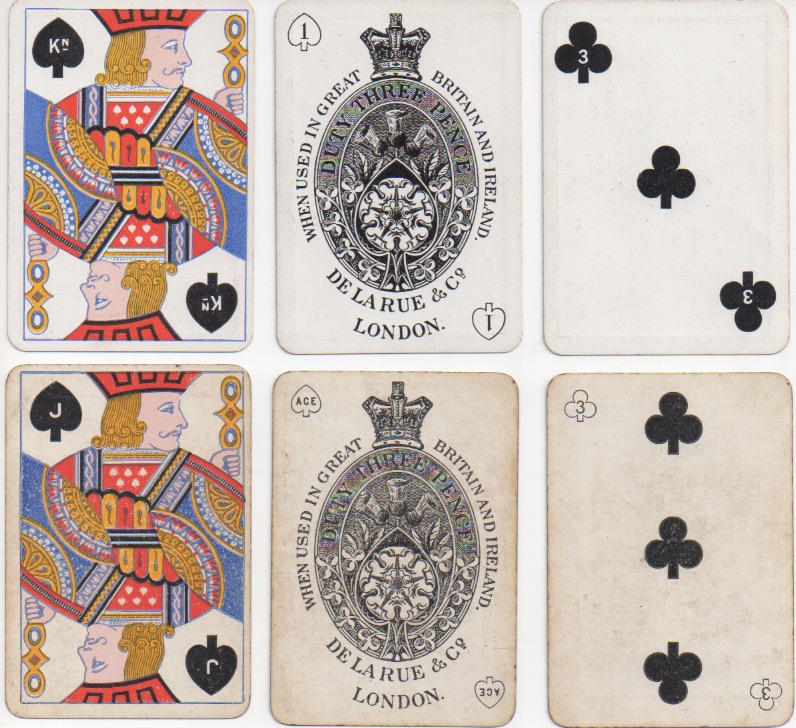 Above: two versions of the Dexter index. Given the description in the text the top one is the original version and the lower a later attempt of improving it. Although the term 'Dexter' was retained for any kind of index, this particular system seems to have been discontinued by the mid-1880s. Queen Victoria's Jubilee pack of 1887 has very small standard indices with the ace being designated by '1'. Dexters of this kind were also used in patience packs into the 1890s.