Sadly, there is no book on De La Rue's playing card manufacture similar to those by Mike Goodall on many of their competitors. And yet there is a great deal of material available in their archives. True, the material is dispersed somewhat, mainly between the University of Reading and the Fournier collection. I understand that a lot of the background material sold at auction by De La Rue in 1970 is not available at the museum in Vitoria. If that is so, it's a great pity.

There are two further interesting sources of information: one is on the wopc website and the other is a book about the firm The house that Thomas built written by Lorna Houseman and published in 1968, just before the firm sold their playing card interests to Waddington. The book only relates the story up until 1941, when the Bunhill Row premises were destroyed in an air-raid and is not restricted to the production of playing cards, so there's no doubt enough for another book on their later development.

See page 28 for a discussion of plate differences in De La Rue cards and page 49 for the database of my cards with De La Rue courts.

In December 1831 Thomas de la Rue was granted his patent for printing playing cards by letterpress. In the submission for the patent the details of both his early designs is given. D1 is a break with some of the postures and clothing of the traditional figures and D2 is based on the contemporary Type III courts used by Reynolds, Hardy and several other smaller makers such as H. Wheeler and Stopforth.

It is said D1 did not find favour with the card-playing public, because he had changed so many traditional features; D2, on the other hand, was in line with cards of other makers. De la Rue liked to experiment, even in the early days, so we find packs with a white line round every pip and packs with a lot of gold on them.

Above: D1 with overlay

Above: D2 with gold, backs have gold design, too

There are also packs with green added to the traditional colours; sometimes the packs have mixed gold and green and gold courts with a consistent back design. (Don't forget, packs were put together by hand, so mixing of this kind occurred quite easily.)

Above: D2 with green and gold

By 1840 he had redesigned his courts again, updating the design and adding a lot of extra decoration to the clothing. These were produced for quite a while and even survived into the post-Frizzle period.

At about the same time or slightly later the firm introduced a smaller-sized pack, possibly aimed at card-playing ladies, called The Victoria in adverts and price lists.

There is even a double-ended version of the latter.

After 1922, when Goodall and De La Rue had merged, both of their current designs were used for a few years, but by about 1930 the De La Rue design D9 had been discontinued. Eventually the Goodall design was taken over by Waddington, as they printed De La Rue and Goodall cards from 1942 onwards. De La Rue sold out their playing card interest to Waddington in 1969.

De La Rue also introduced a number of what were considered improvements to cards to enhance handling during play. The pneumatic finish appeared some time in the 1880s and continued into the 1960s, by which time it was referred to as herringbone. There was also a silk-watered finish, which give the impression of shot silk; it seems to have been used only on one-colour plain backs.

The firm also produced cards for those with poor sight. As far back as the 1851 Great Exhibition they were showing Optik cards. What they looked like I don't know, but later ones had different coloured suit-signs and the courts and AS had an extra blue-grey added.

They also produced a peculiar pack, which may have been for poor-sighted people, with large pip and Roman numerals in the centre and an added decorative frame line. It isn't clear to me how this helped with play.


For a discussion of the plate analysis of De La Rue's courts, see page 28; a detailed set of illustrations from my collection is on page 49.

From 1844 until 1874 the designer Owen Jones produced a series of colourful and highly decorative back designs for De La Rue. I have never seen a full list of the designs and it's not always possible to know for certain whether he was the designer in any particular case. It would also appear that other people designed backs for the firm as well. Here is a selection of obvious examples. The first two are from the set he designed for the Royal Family, which were on sale at the Great Exhibition of 1851. 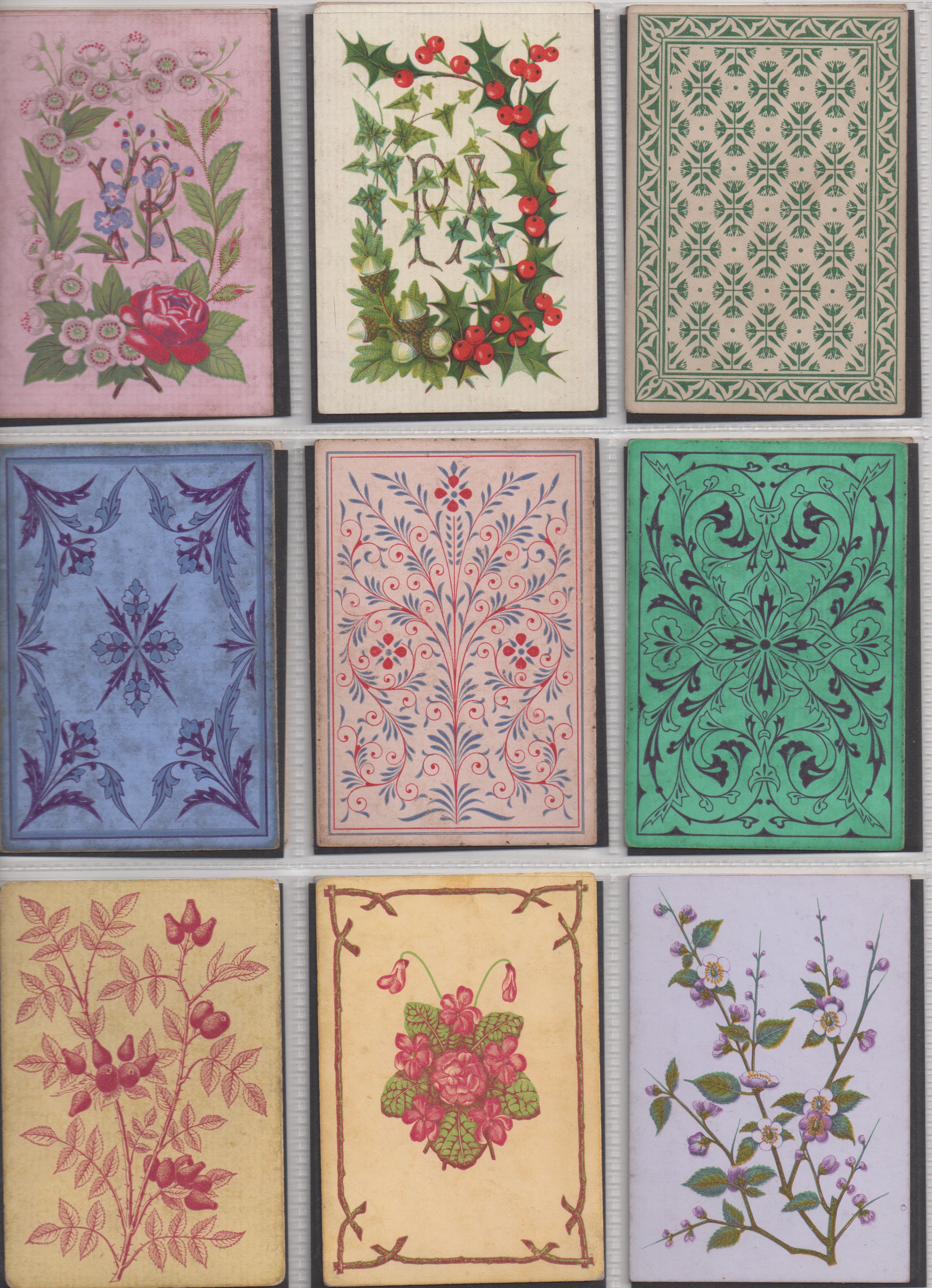 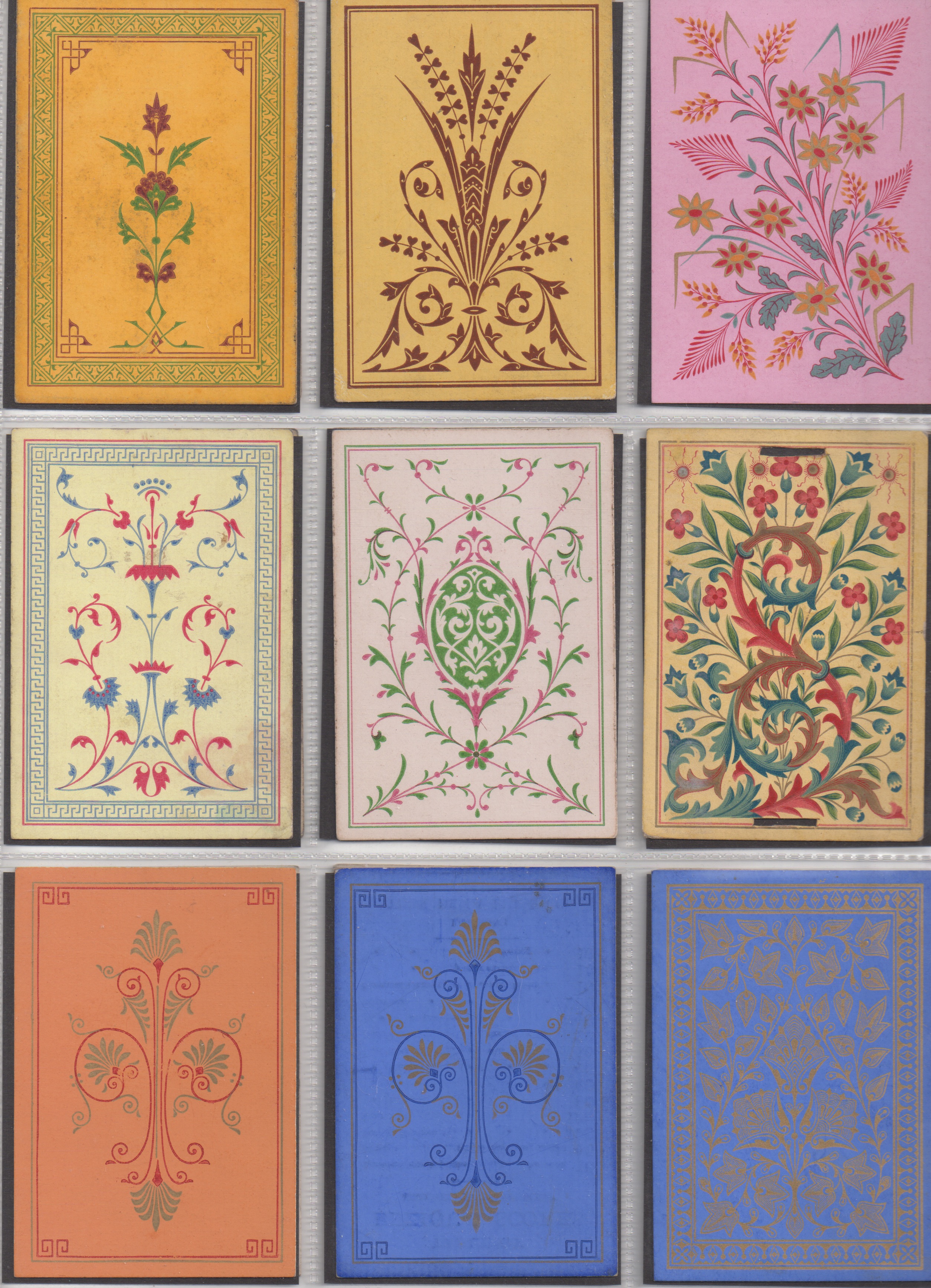 By the 1880s, a while after his death, others had taken over, but they clearly found inspiration in some of his ideas and themes. 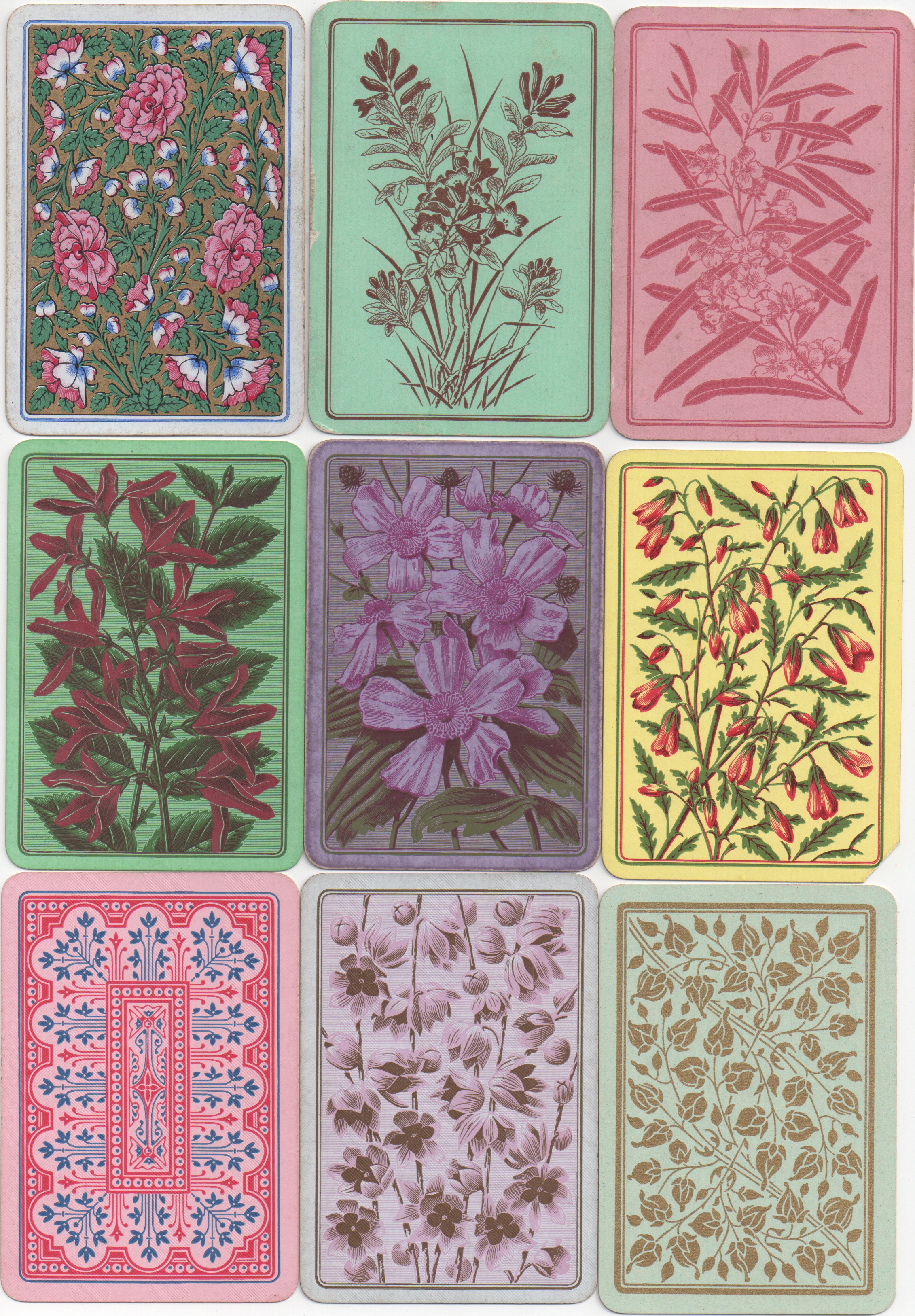