There are many examples of makers copying other makers' designs. We've seen a few on other pages. But clearly, there's a big difference between using a design as a model, which is then altered in various ways, and an exact copy, which has only become possible recently with electronic technology. So, the topic deserves a bit more detailed consideration. We might reasonably ask why anyone would want to use a design someone else had used. Laziness? Kudos? A desire to mislead? Here we are moving towards a particular kind of copying, the production of a fake, and I’ll return to that later. We could also get copies in places where the traditional cards are not English and maybe only one kind of standard English pack is known. For instance, in Italy the vast majority of English pattern cards use a version of Goodall’s design, right up to the present day. Presumably, Goodall’s cards were available quite widely in Italy at one time.

The most likely cards to be copied are the courts, AS and joker. Sometimes the design of the box is copied, too. Here is an exact copy of the courts and joker of early Carta Mundi wide cards made in Hong Kong for the British souvenir market. The surface of the fronts is quite poor. 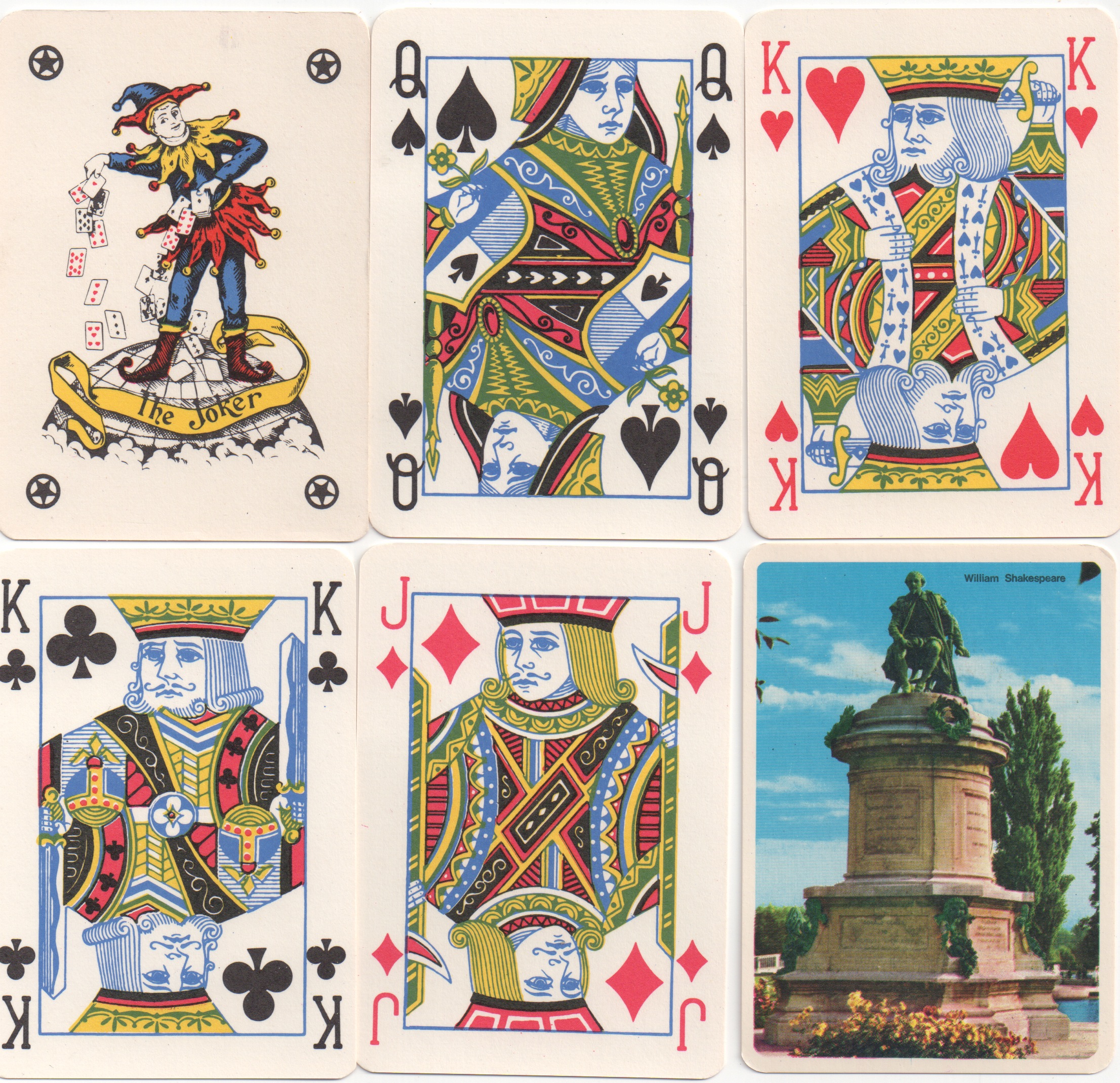 It’s difficult to assess to what extent foreign makers try to pass off their products as something made in England, Belgium or the United States. The cards below are versions of the USPCC modern poker cards (US7) made in China over recent years. The bottom two are virtually the same as the American originals. The middle AS is a common pattern of which there are several variants, but it's based on the old NYCCC's design for 92 Bee packs; the middle joker is an altered Carta Mundi design. 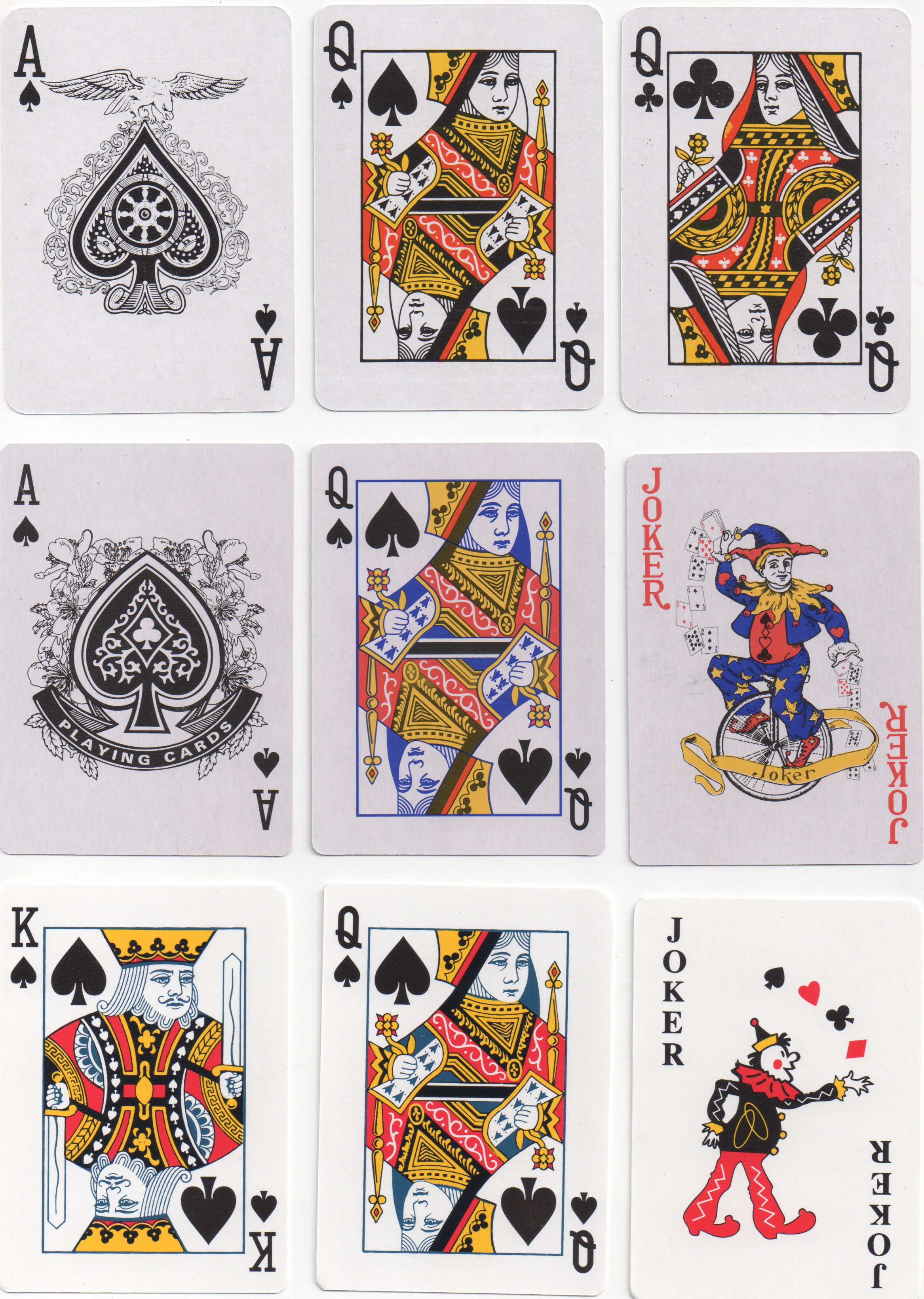 Similarly, in South America, where US cards were imported in quite large numbers, locally produced copies were also the order of the day. Today Copag still uses their close copy of the USPCC courts used in the Fauntleroy patience packs and jumbo index packs (US1.1). 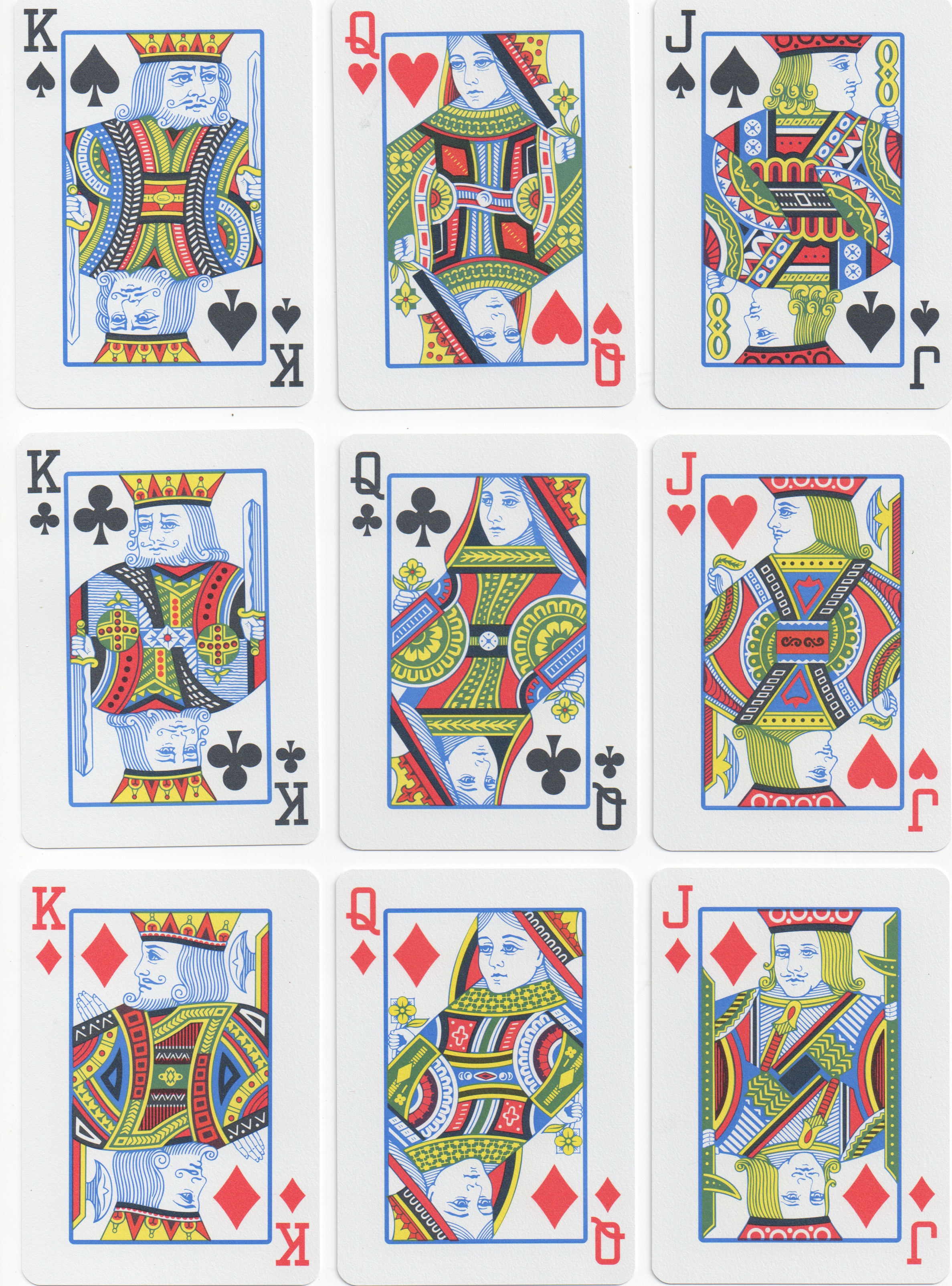 When a design has become established in a country or area, it is often developed into local variants. The QSs below are examples of redesigned versions of the American poker design made in China from the late 1960s onwards. The one on the right is the closest to the original design.

And the courts, AS and joker below were made in China for the American casino market in 2003 with an idiosyncratic reworking of the design.

At the other end of the scale there are definite attempts to defraud, usually by avoiding the taxes levied on cards. This was very much the case when the tax on cards was very high, such as during the Napoleonic Wars. If a pack could be bought for a penny or tuppence, that was a great deal better than paying 2/6 in tax plus the cost of the pack. The trade in illegal second-hand packs or illegally imported ones must have constituted a considerable loss of revenue for the government of the day. Blanchard and Hunt seem to have been particular targets, though I suspect that what appear to be Hart packs often are not. Some of the latter actually have American-style courts. I illustrate examples with different types of court card, but fake ASs. 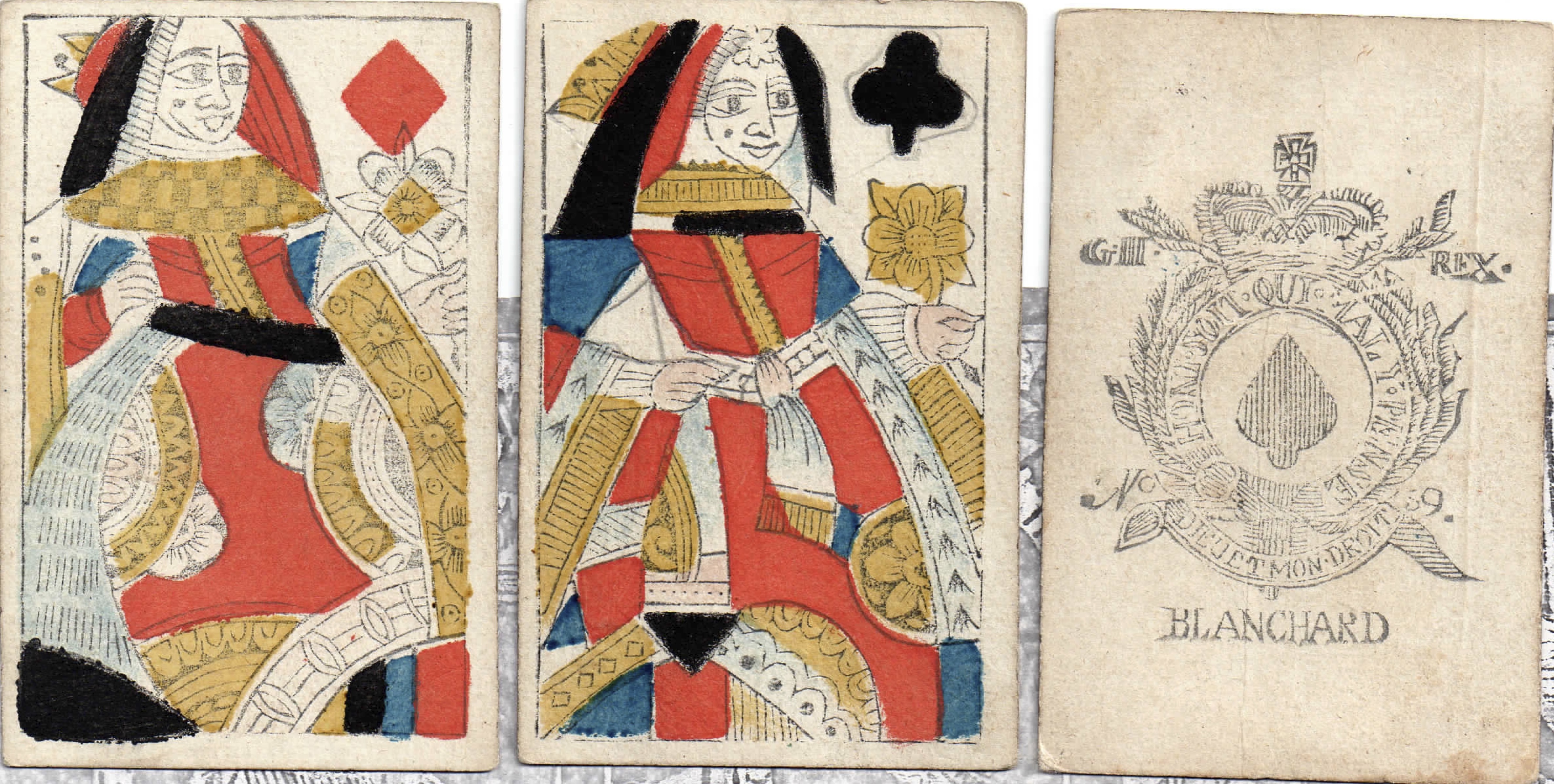 Genuine Blanchard courts with a wood-block AS, possibly made by Harding, c.1805 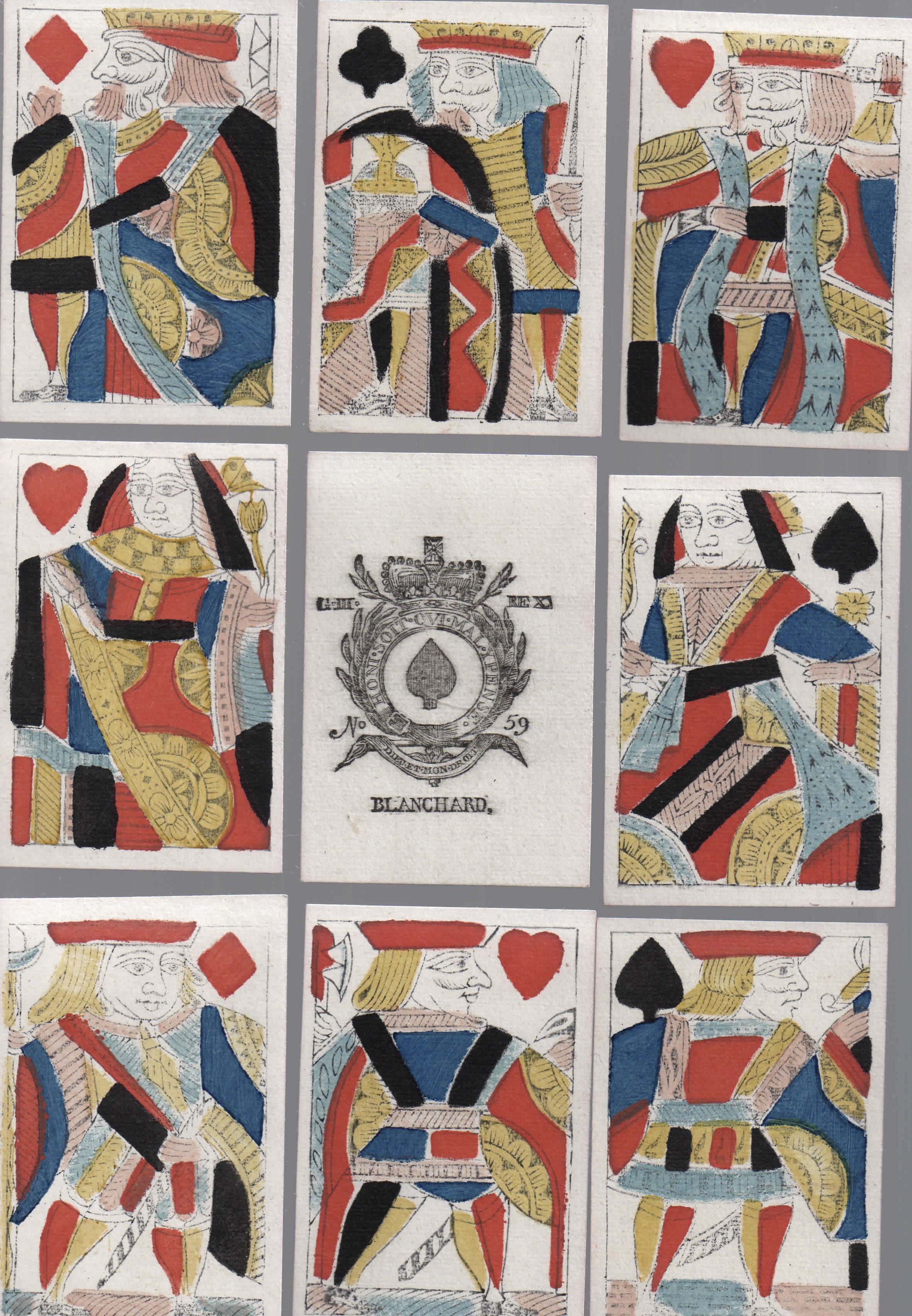 A fake Blanchard AS with a different style of court card, probably Belgian, c.1820? 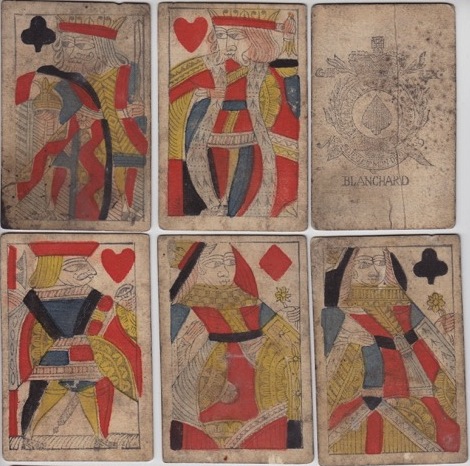 And there's even another fake Blanchard with Type I courts, copying those of Gibson/Hunt. Thanks to Paul Symons for the image. 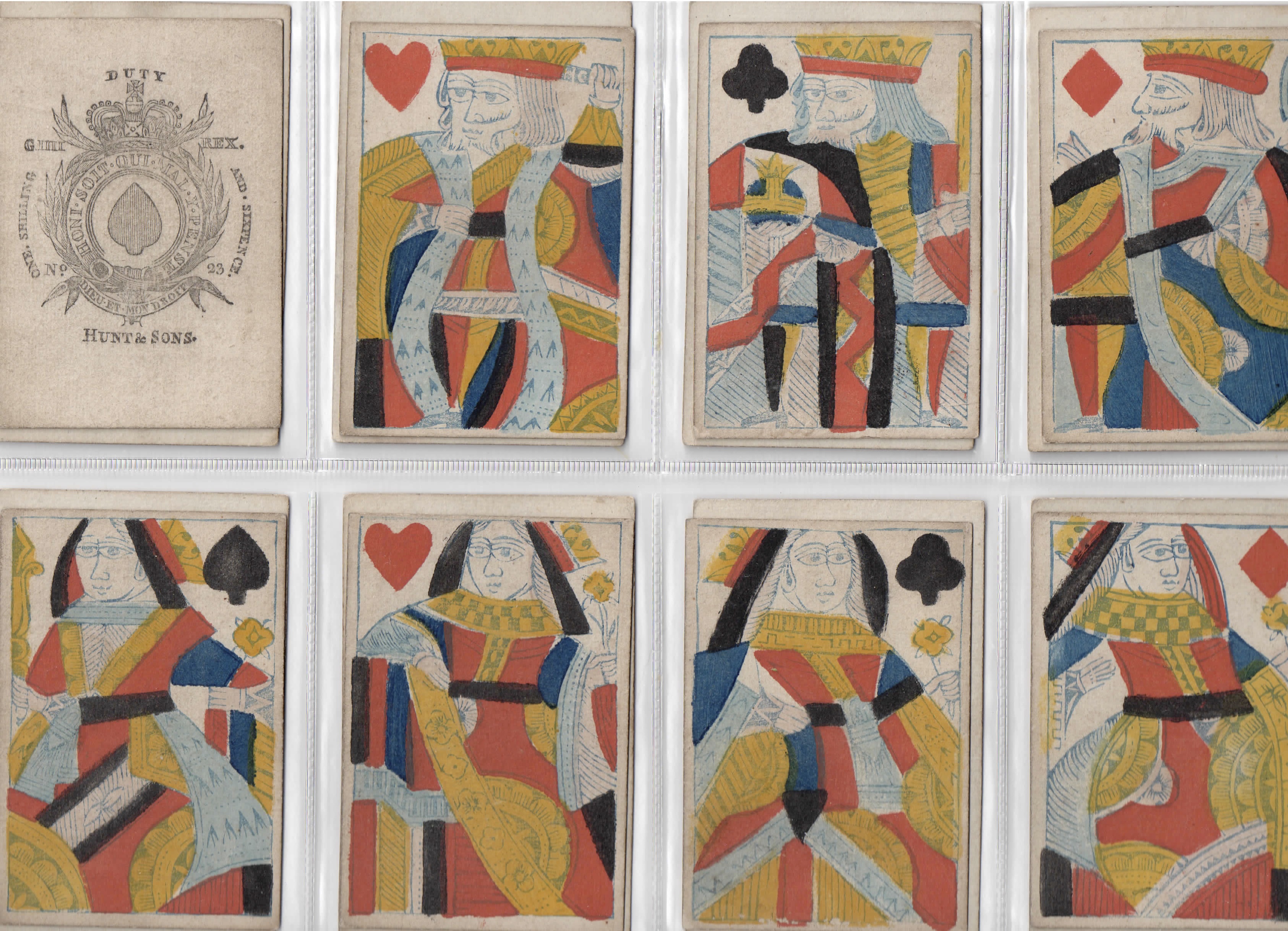 A fake Hunt: note the 'IIII' on the AS instead of 'IV' for (George the) fourth; also the courts are not those of Hunt's design, but are like those of Hall and Stone. Belgium, c.1825

A rather fun pack, which would hardly fool anybody, was also made in Belgium. In this case the AS bears the inscription 'GIID' and there's a small bird underneath the garter. It looks like a joke at the expense of the British taxman! Since this pack also has double-ended number cards, it might be a little later, perhaps from the 1840s. 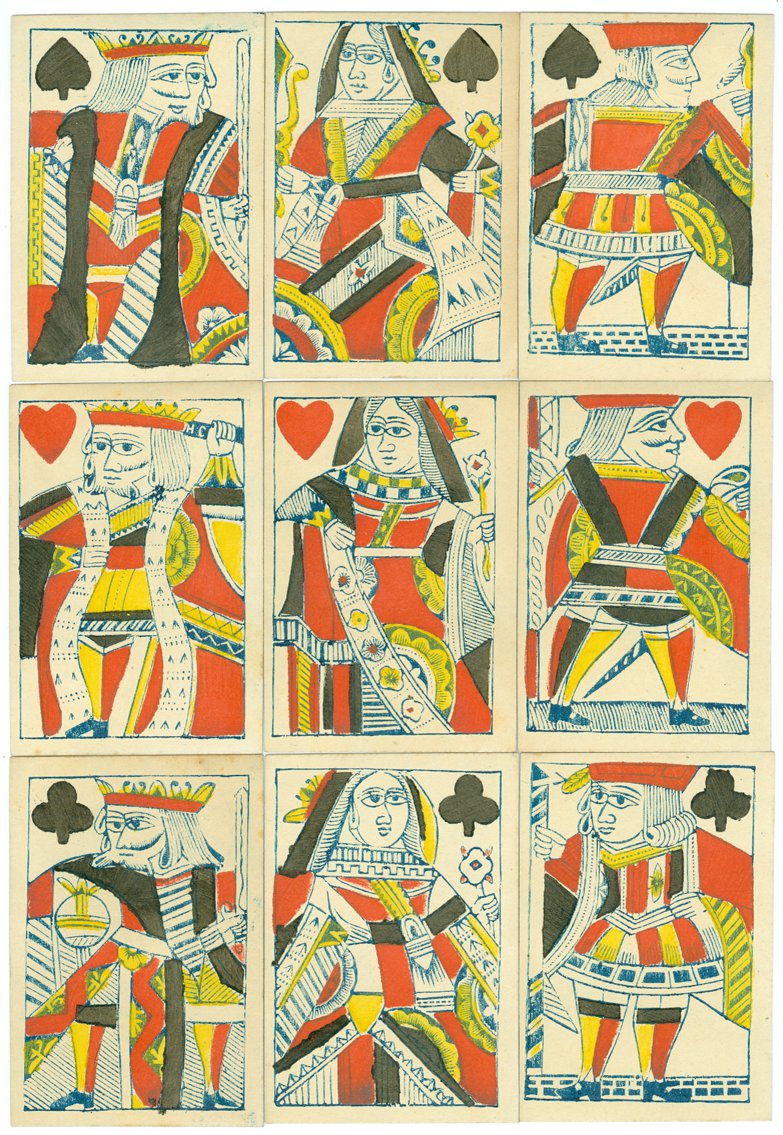 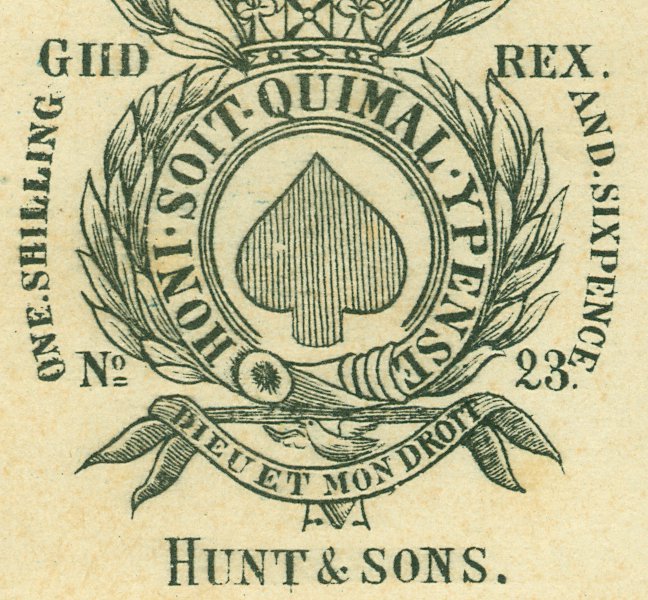 The final example is from the USA. In this case a genuine Hart AS seems to have been used in a locally produced pack. The courts are definitely American in style and so is the back design. The date could be anything between 1790 and 1820, though note that Henry Hart ceased trading in England in 1799. 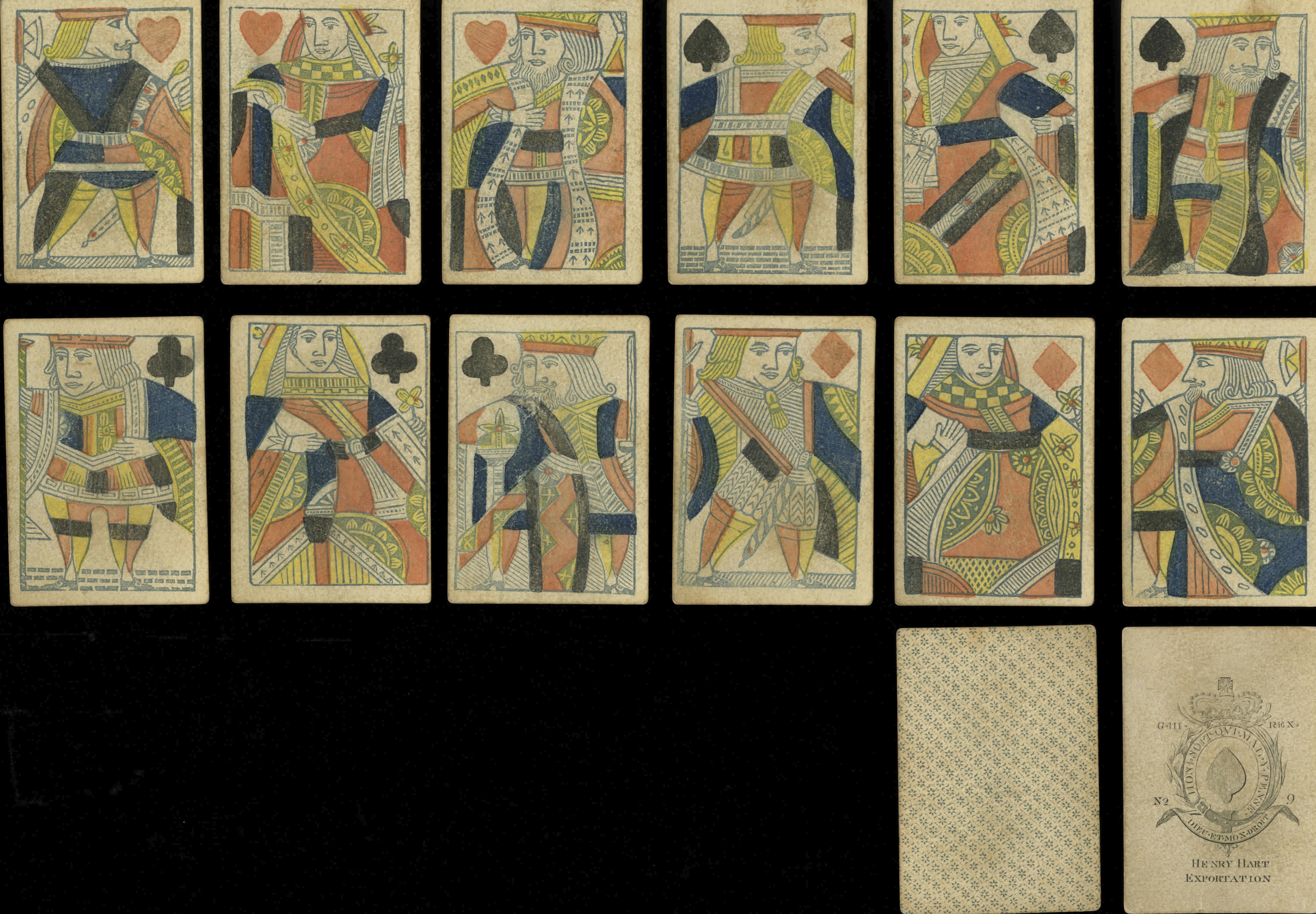