On page 34 I introduced the topic of design copies and exemplified it mostly with examples of copies of Goodall's design. On other pages there are further examples of copying in one way or another, though this is not the focus of the page necessarily. Here I want to take another widely copied design and see how individual variation by the copier can take the original design through a lot of changes. I shall take the three USPCC designs: US3 (wide), US3.1 (bridge) and US4 (wide). To the best of my knowledge these are no longer used in the US, except perhaps for special productions, as in the retro market. 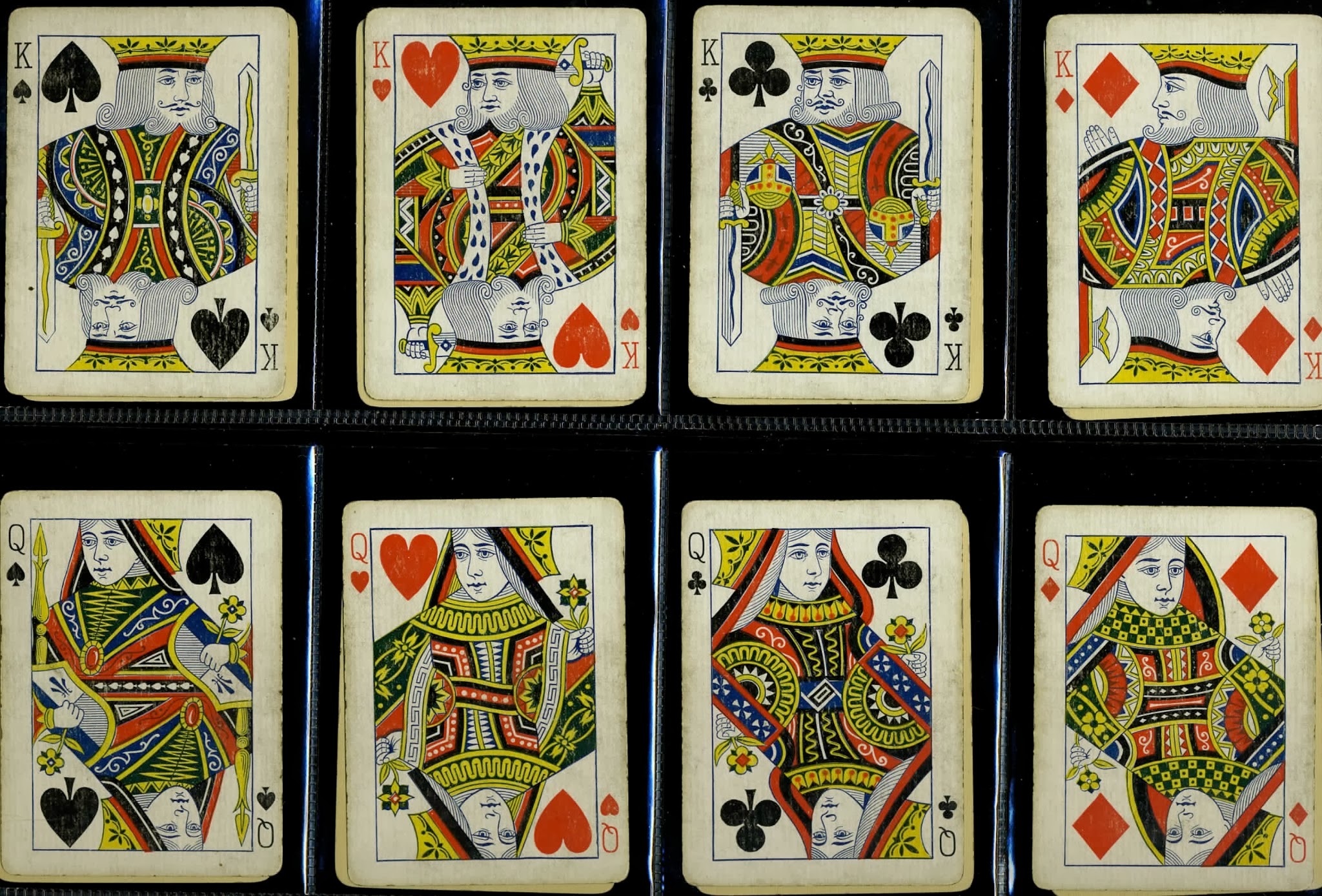 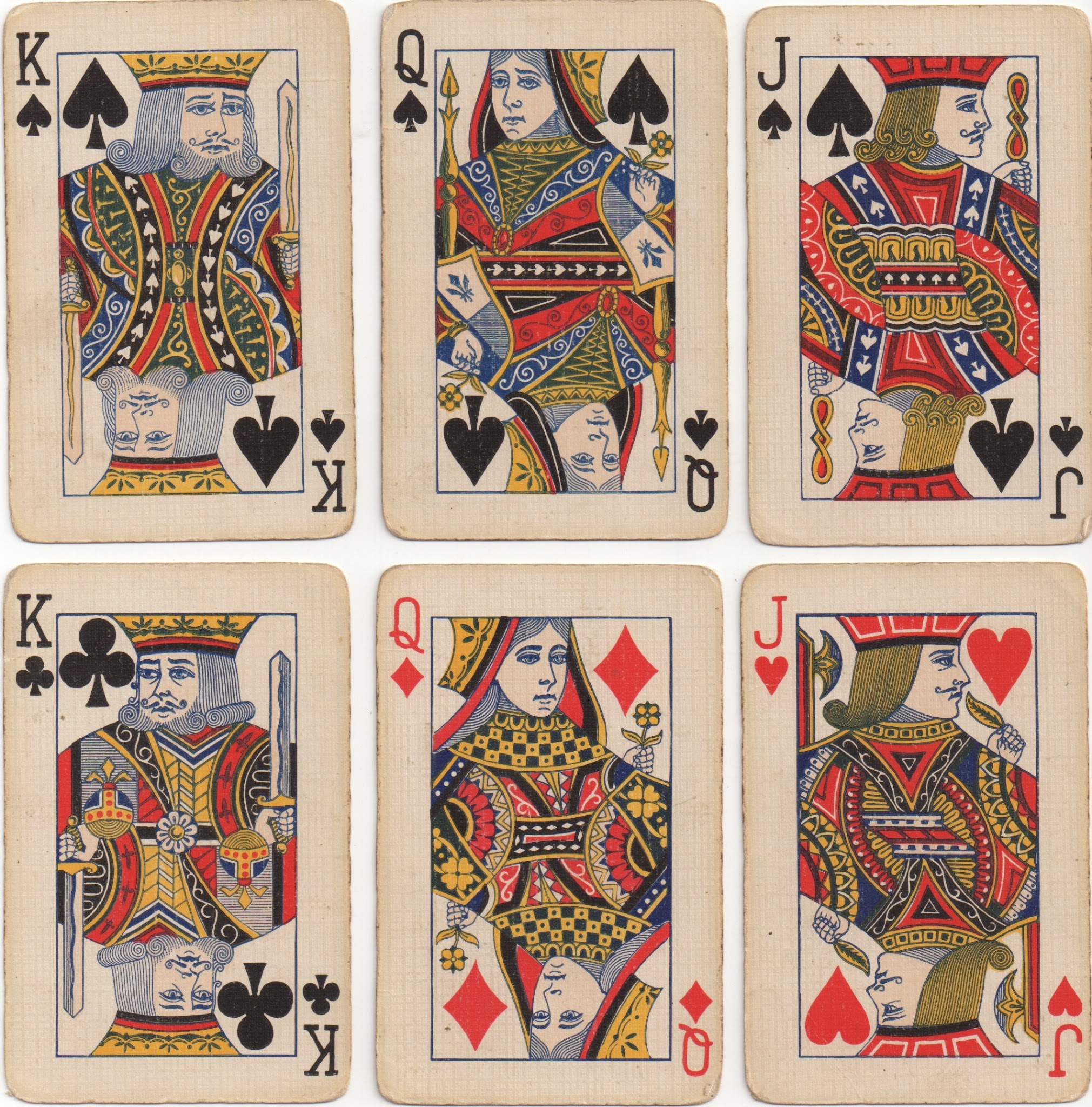 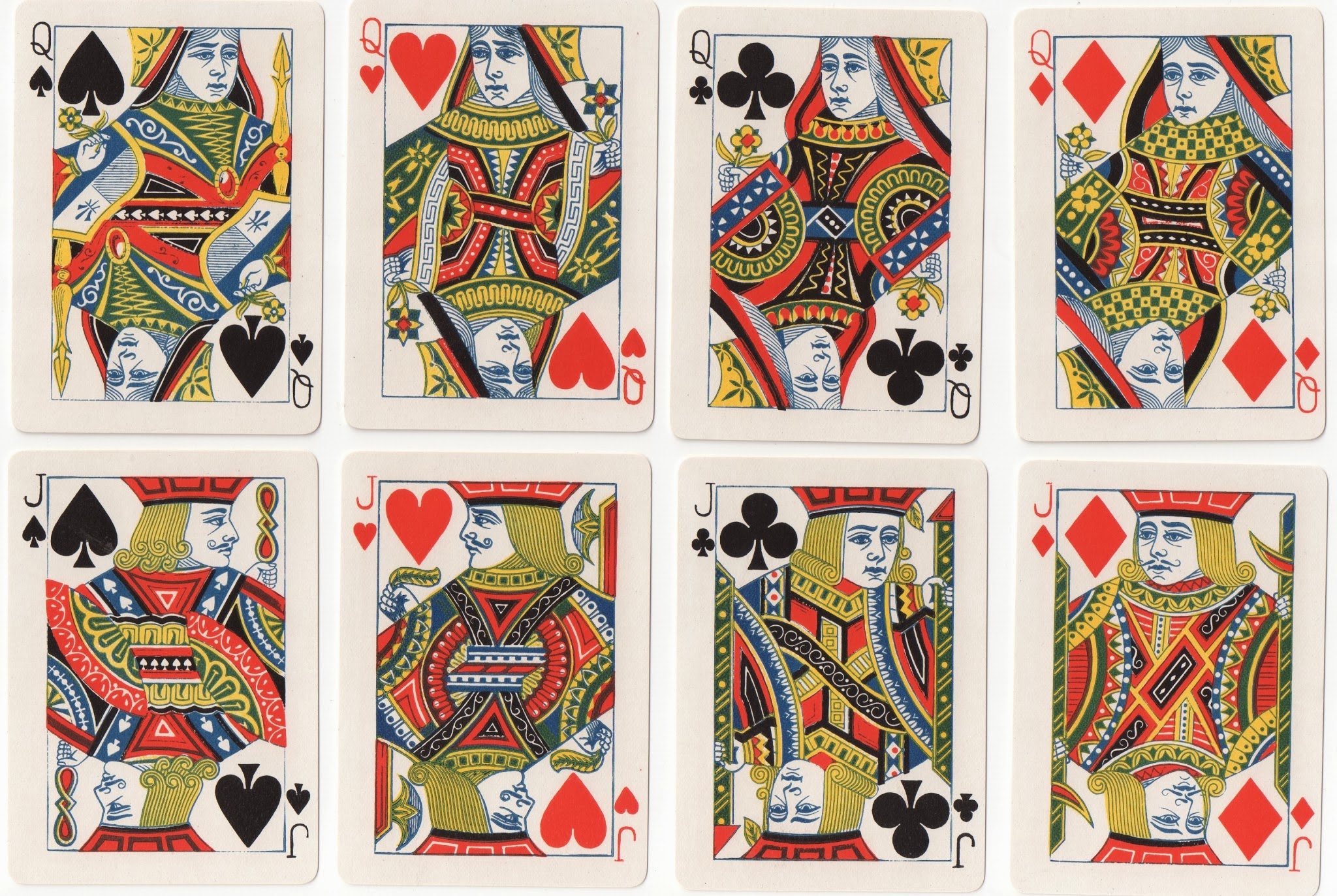 Above: US4, a redrawing with six turned courts, used with many minor redrawings from c.1900-1950

Note that in the two previous designs the QS has her hand sloping upwards in parallel to the edge of her sleeve: this is a particular defiining characteristic of these designs and their copies. These two designs were copied widely within the United States and a turned version of US3.1 was used in bridge cards. As far as I know, this turned version (US3.2) was not used by USPCC itself. Below are a selection of QSs by other American makers from the 1930s, unturned copies on the top row and turned ones, both US3.2 and US4, at the bottom. Notice how the clothing can be redrawn considerably in some cases. 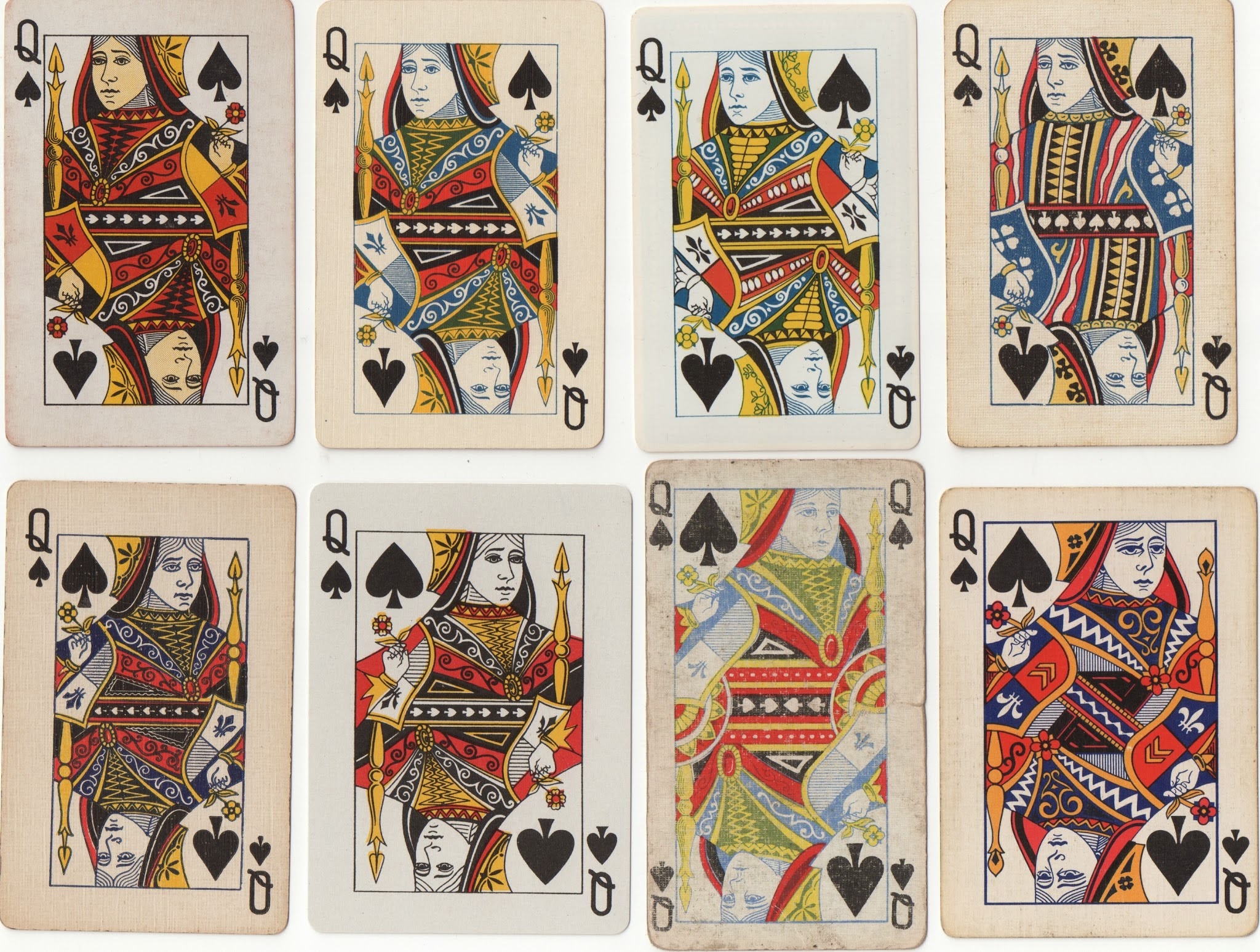 US3 was copied in the early 20th century by a number of European card-makers.

There was also a version, very similar to Piatnik's, by Grimaud. In more recent years, in the late 1950s, Piatnik produced a redrawn version with six turned courts. This was really a transformation of their XUS3, rather than a copy of USPCC's turned version, US4 (note the QS's horizontal arm). 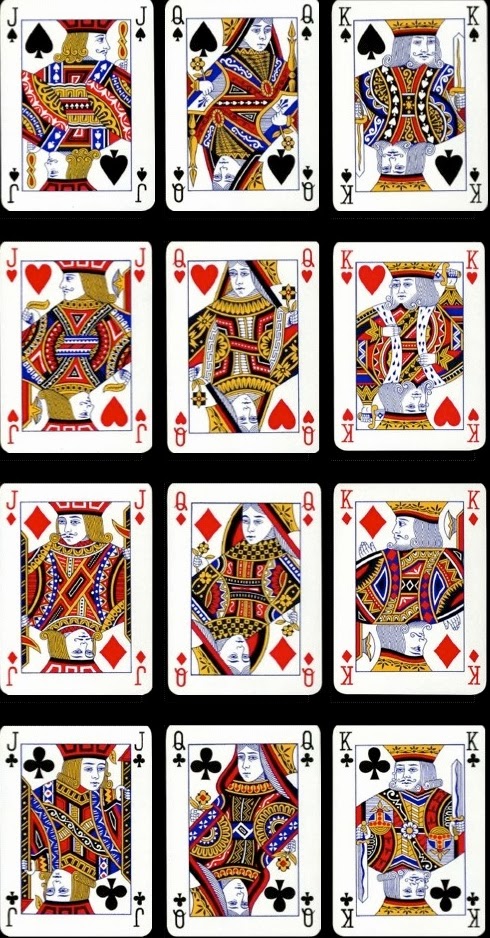 This design is also found with an F X Schmid AS (but a Piatnik joker) and an anonymous AS, which looks like a Chinese one used in hundreds of their packs, but bearing the legend Made in Germany.

Now this example brings me to cases where identification of a maker becomes very tricky, if not impossible, even with modern packs. Below is yet another example of the Piatnik turned courts in a large-index pack, a souvenir of Seville. 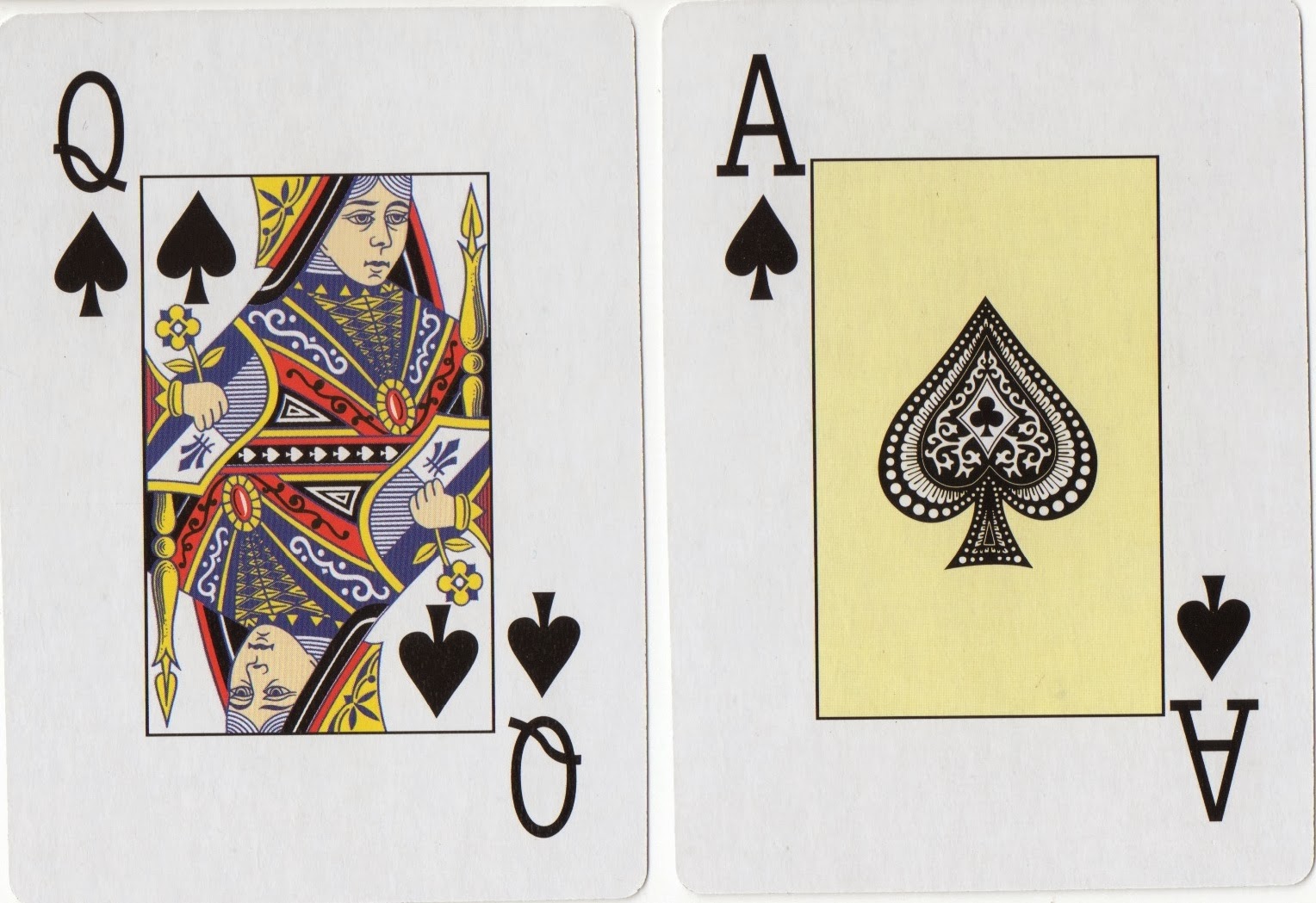 The AS is anonymous, but is the same as the one above, purporting to be German, though on the box of the Spanish pack it gives the origin as 'RPC' (= People's Republic of China). To make matters worse, another Spanish souvenir pack by Varitemas of Barcelona has the same large-index number cards but the courts are a copy of US3.2, as produced in China. Note it says "Made in Spain" on the AS!

When it gets as complicated as this, it's best just to enjoy the cards!

I have another quizzical example involving copies of US3.1. The German firm, Nürnberger, used a copy with no white overlays (which occur in the original) and blue in unusual places. They also produced a three-colour version. But I've recently come across another pack with courts from the same plates (I mean the same, not similar), but with white overlay added. These, however, have a different joker, have an AS for the Astor PCCo and claim to have been made in Japan. This makes life even more complicated, as the joker also appears in packs by an unknown (to me) US maker with different courts, of the design used by Cruver in their all-plastic packs of the late 1930s. I haven't begun to unravel all this yet! Interestingly, though, the firm's name is: Nürnberger-Spielkarten-Verlag (NSV), of which the last element means publisher, so anyone could be printing the cards for them. 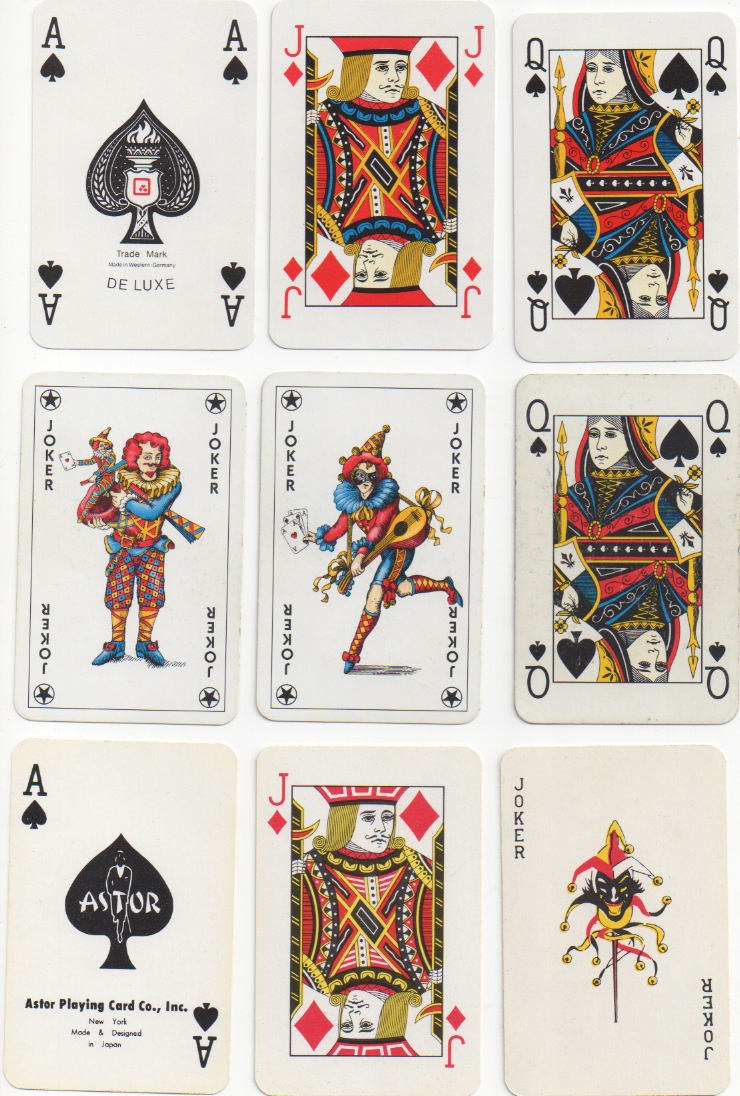 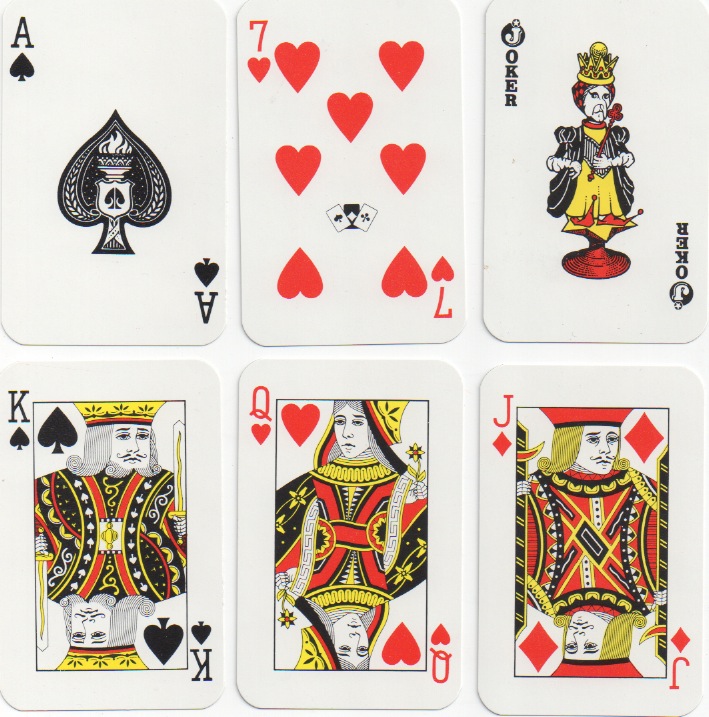 Above: three-colour version by Nürnberger?, but the logo is different and I've seen this anonymous AS and joker in packs from Hong Kong

Above: The pack with Cruver courts, purporting to be made in Barbados; these courts appear in US packs, too.

US4 has also been copied widely outside the United States, especially in China. Here is a small selection of the copies. Note the angle of the QS's arm in each case (except for the Swisscards example, in which most of the courts have no hands!). 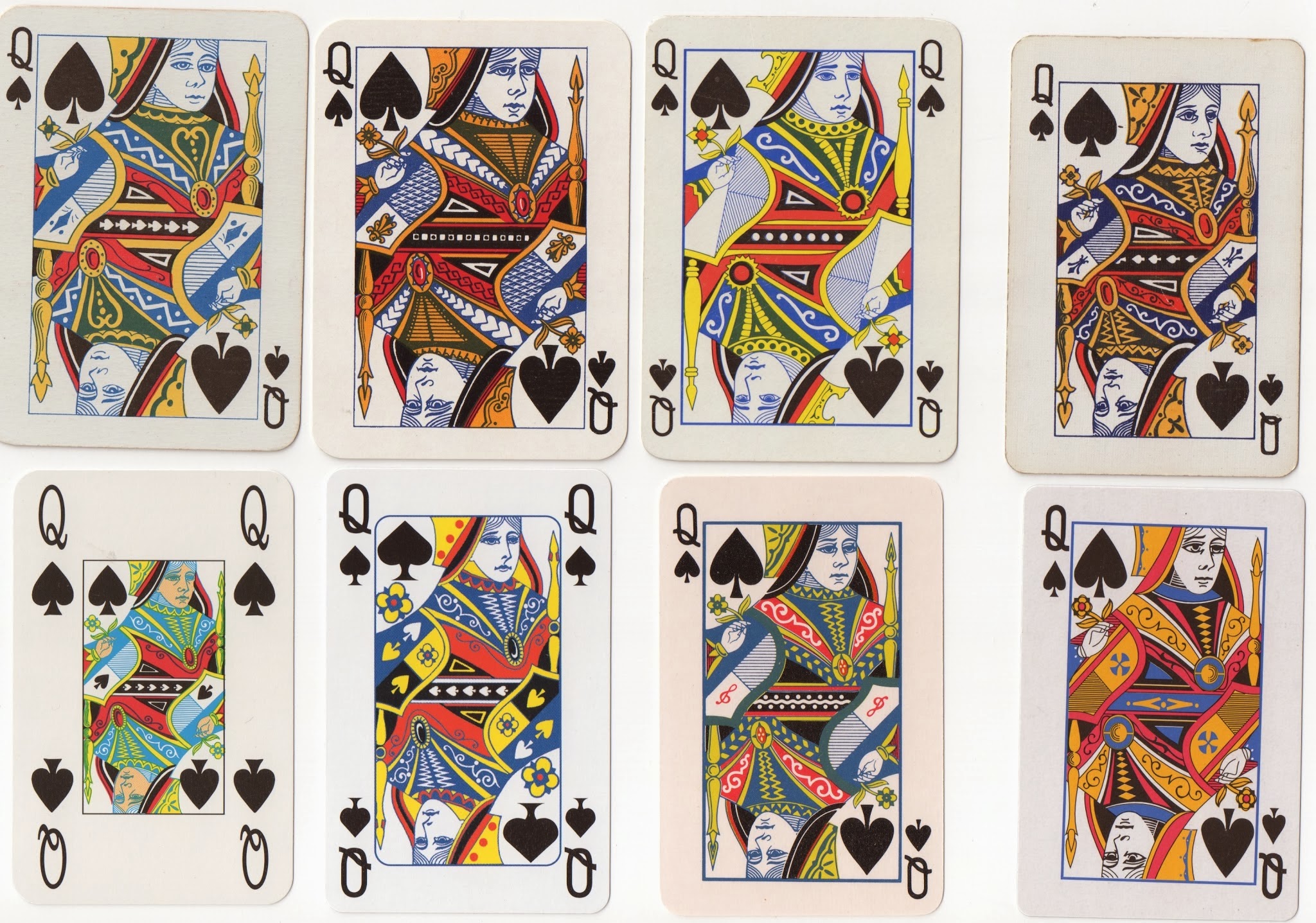 As a nice example of an extreme redrawing, there is a Japanese version in three colours only with six of the courts turned, putting all the pips on the right. 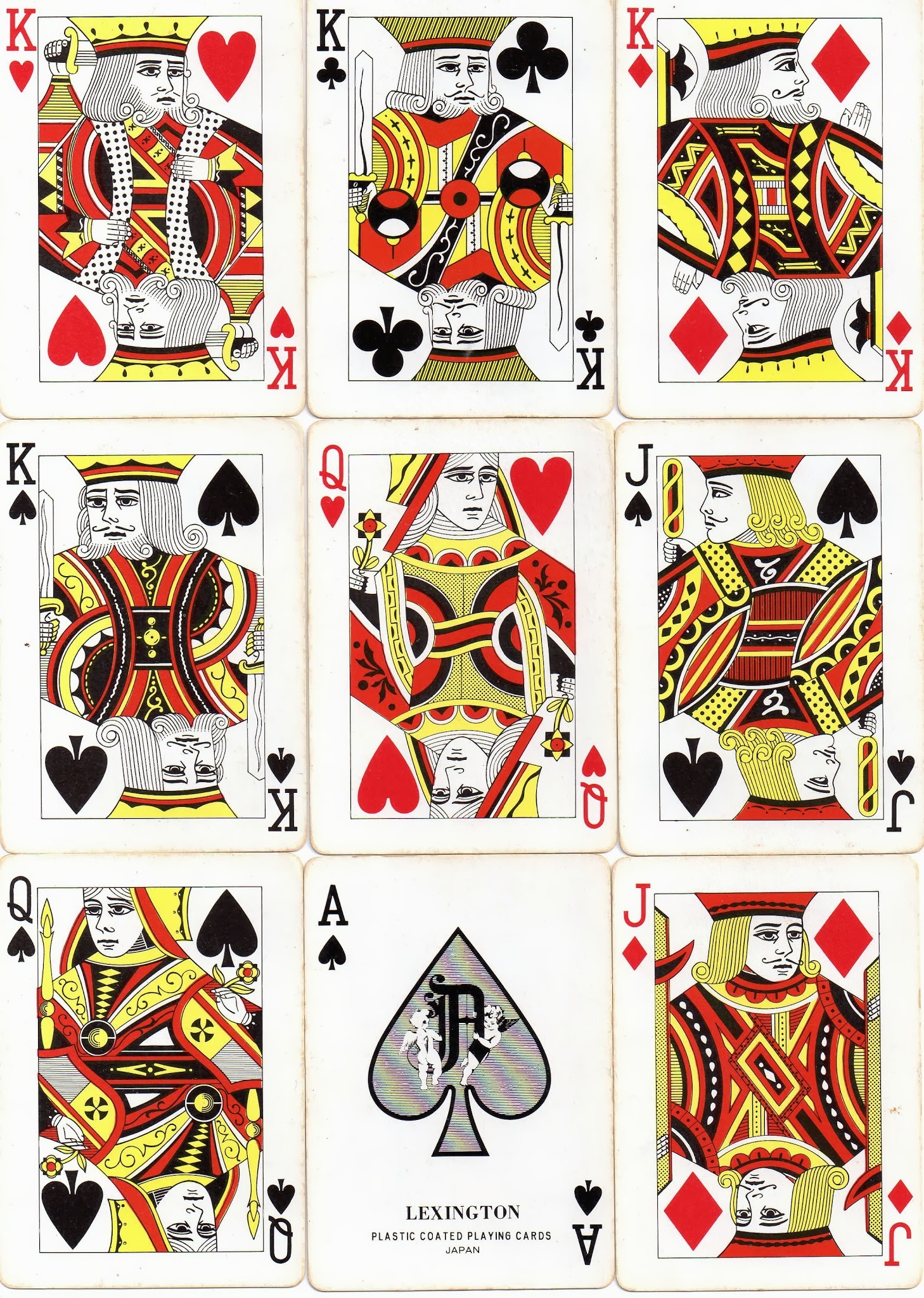 One major copy of US3 is the design chosen by Waddington in 1923 and continued through many redrawings, which took the design further and further away from the original, up until c.1975 (W2-W6). The style of drawing is completely different, but all the details of the clothing are retained. I've chosen the QS to exemplify most of the changes the design went through, including the bridge-width versions. Note that the bridge-sized courts are not a copy of US3.1 (USPCC's bridge courts): the QS's arm, for instance, is not held at an angle. I have repeated the early US3 QS at the top for ease of comparison. Try going through all the other courts. 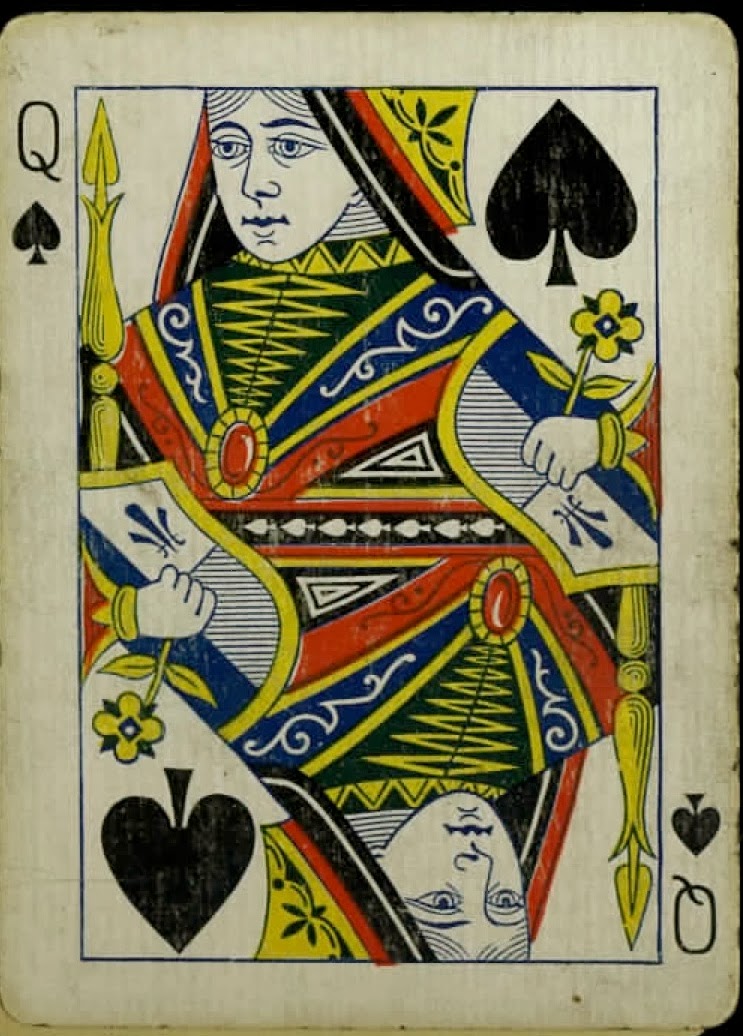 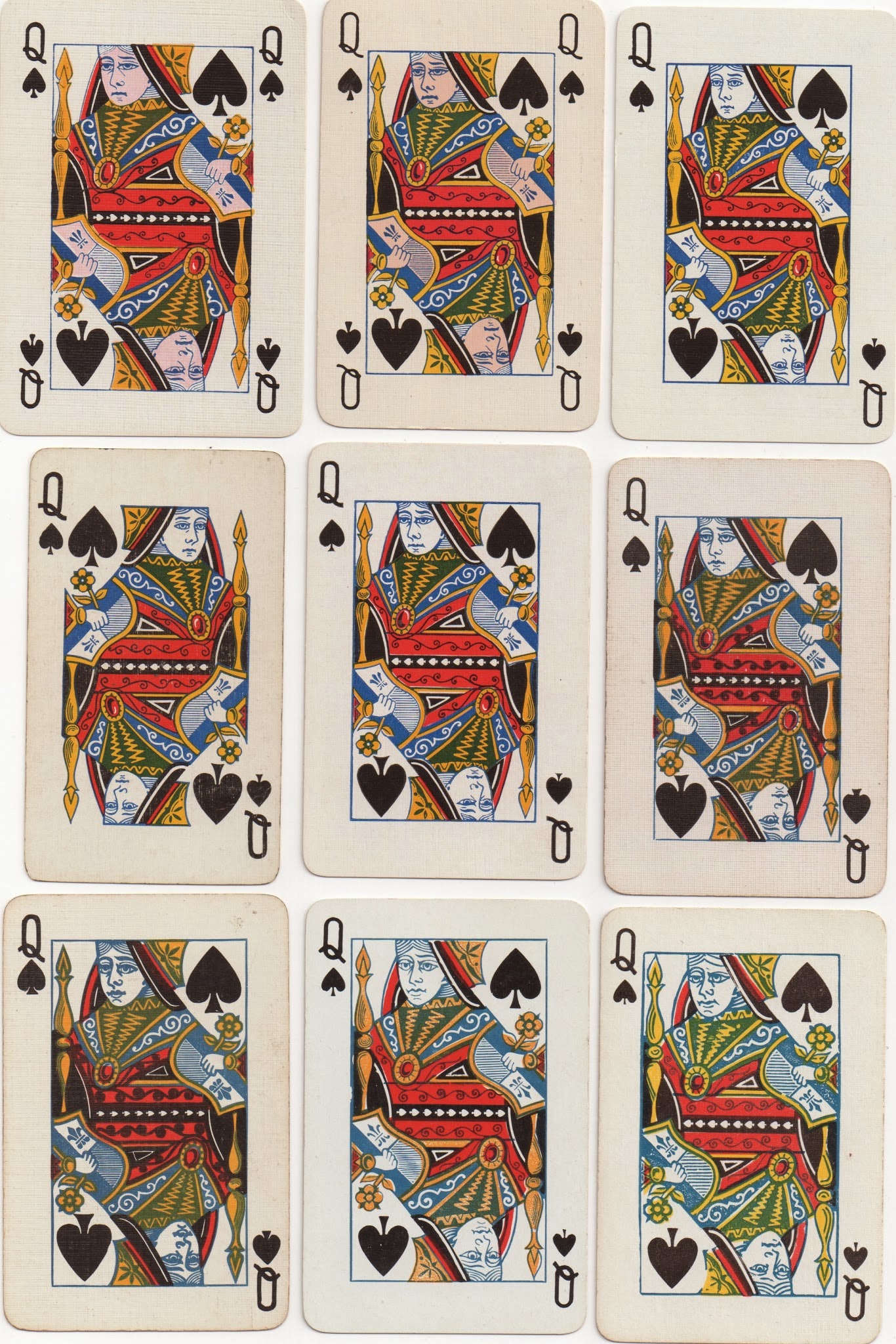 Although US3 was much more commonly copied, there are some copies of Waddington's version. Artex of Budapest made a photographic copy, including the AS (though anonymous) and joker, in the late 1950s and 1960s, and Piatnik also made a copy redrawn in their own style with six turned courts.

Here the JD has retained his moustache, which he loses in the later Waddington versions.

And a recent acquisition is a very interesting copy of W2 with redesigned clothing from Germany in an anonymous celluloid pack from c.1935. (Note that the cards have all curled with age.) 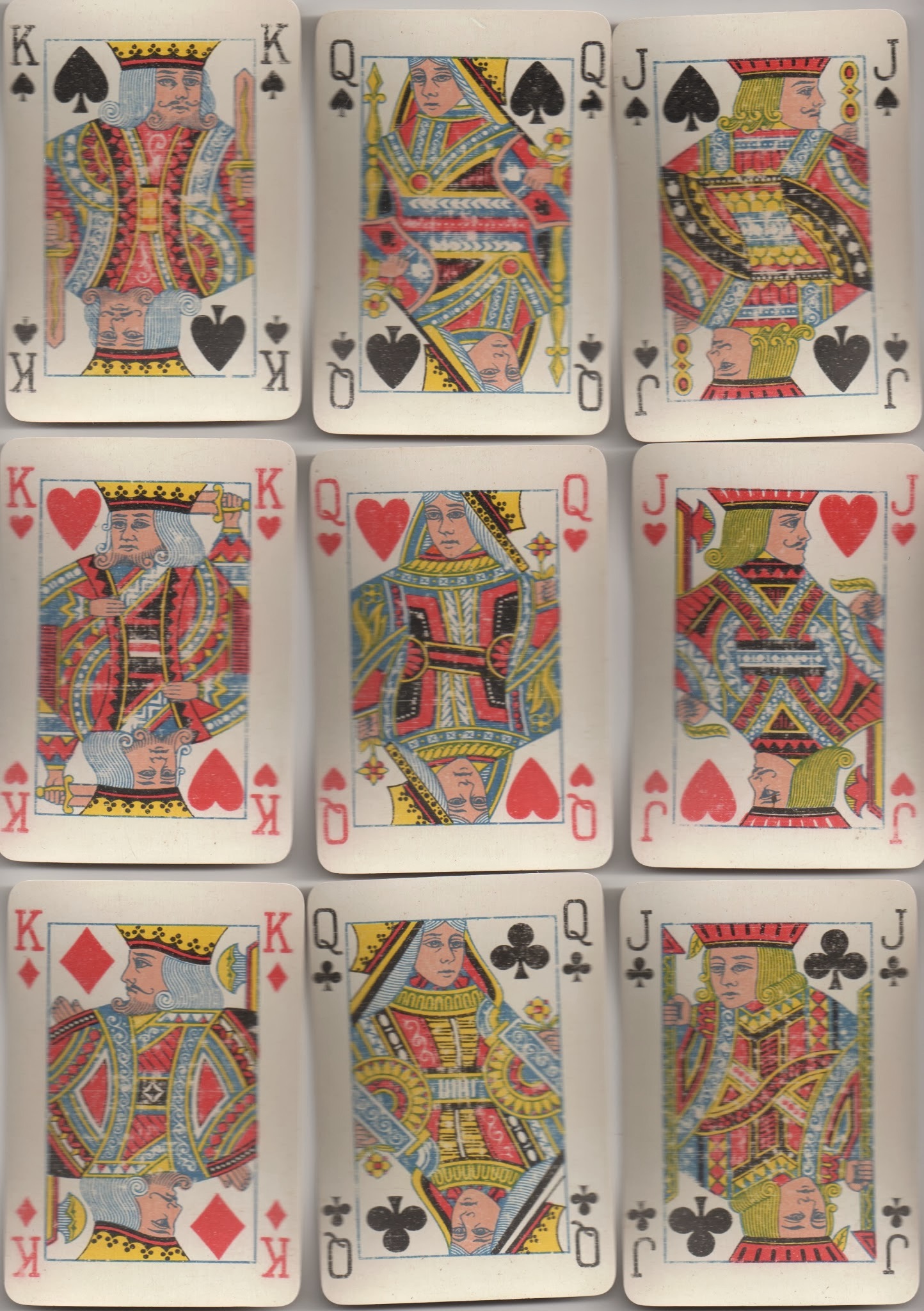