There are some fascinating court cards to be found in 19th century American packs. I give a selection below, but I deal with Andrew Dougherty (page 42) and the United States Playing Card Co. (page 43) in more detail.

The name Thomas Crehor (without an 'e') was used by at least two different makers after the fire of 1846 closed Crehore's factory. (For details, see the Dawsons' edition of Hochman's Encyclopedia.)

The pack below is probably by Dougherty. Certainly, some of the courts are like double-ended versions of the courts of AD1 (but not all). 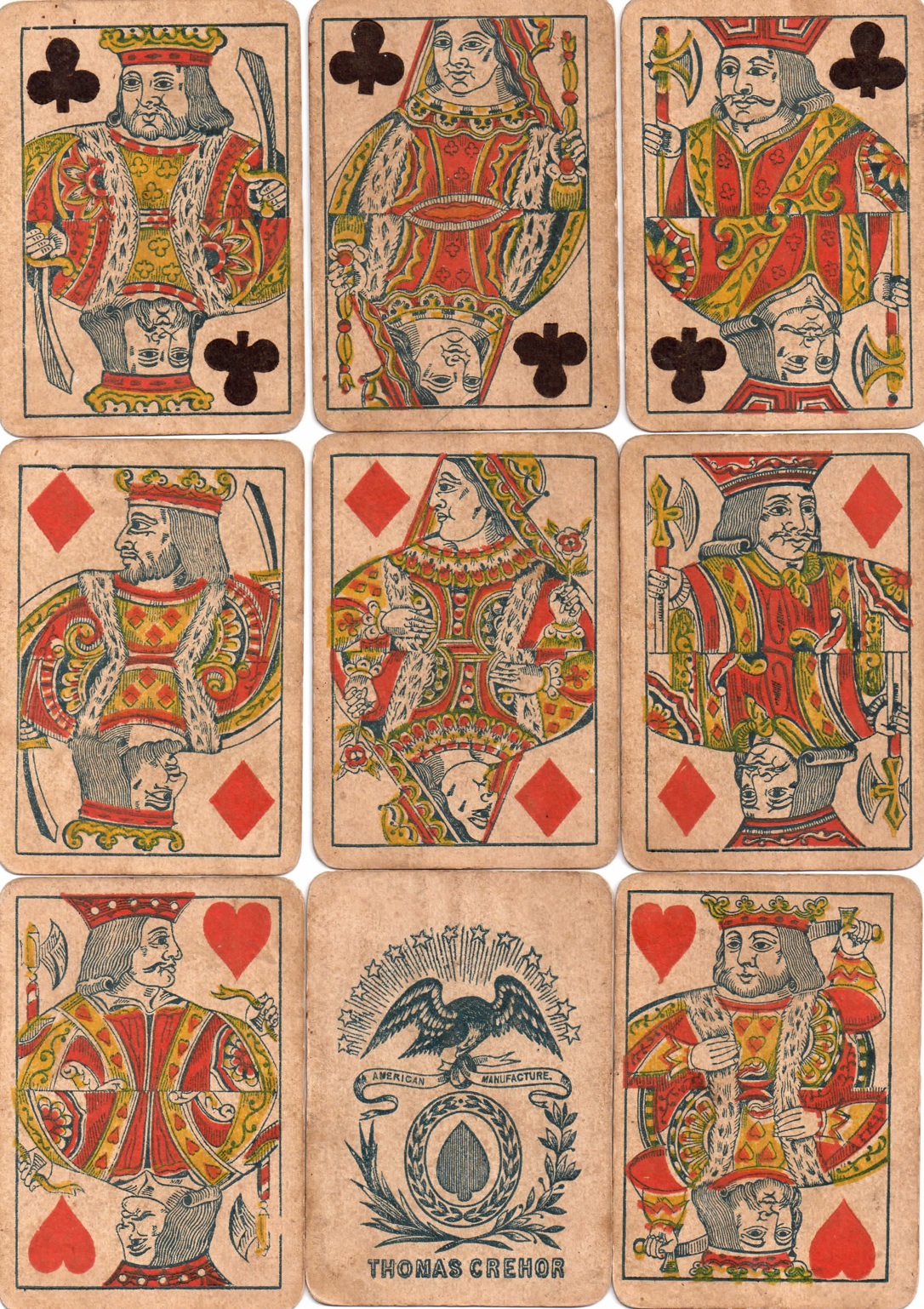 The other three courts are on the next illustration, which also includes the somewhat odd courts used by Levy about the same time and later. (Sorry, the Levy pack is very grubby.) 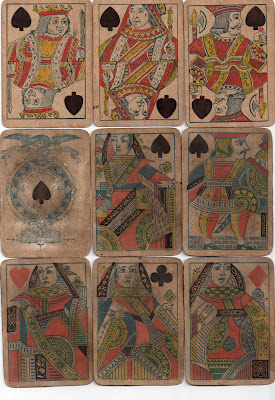 I give a selection of the courts of Hochman AD1 below. An odd feature of these particular cards is that the back design is one used by De La Rue in the 1840s and 50s. 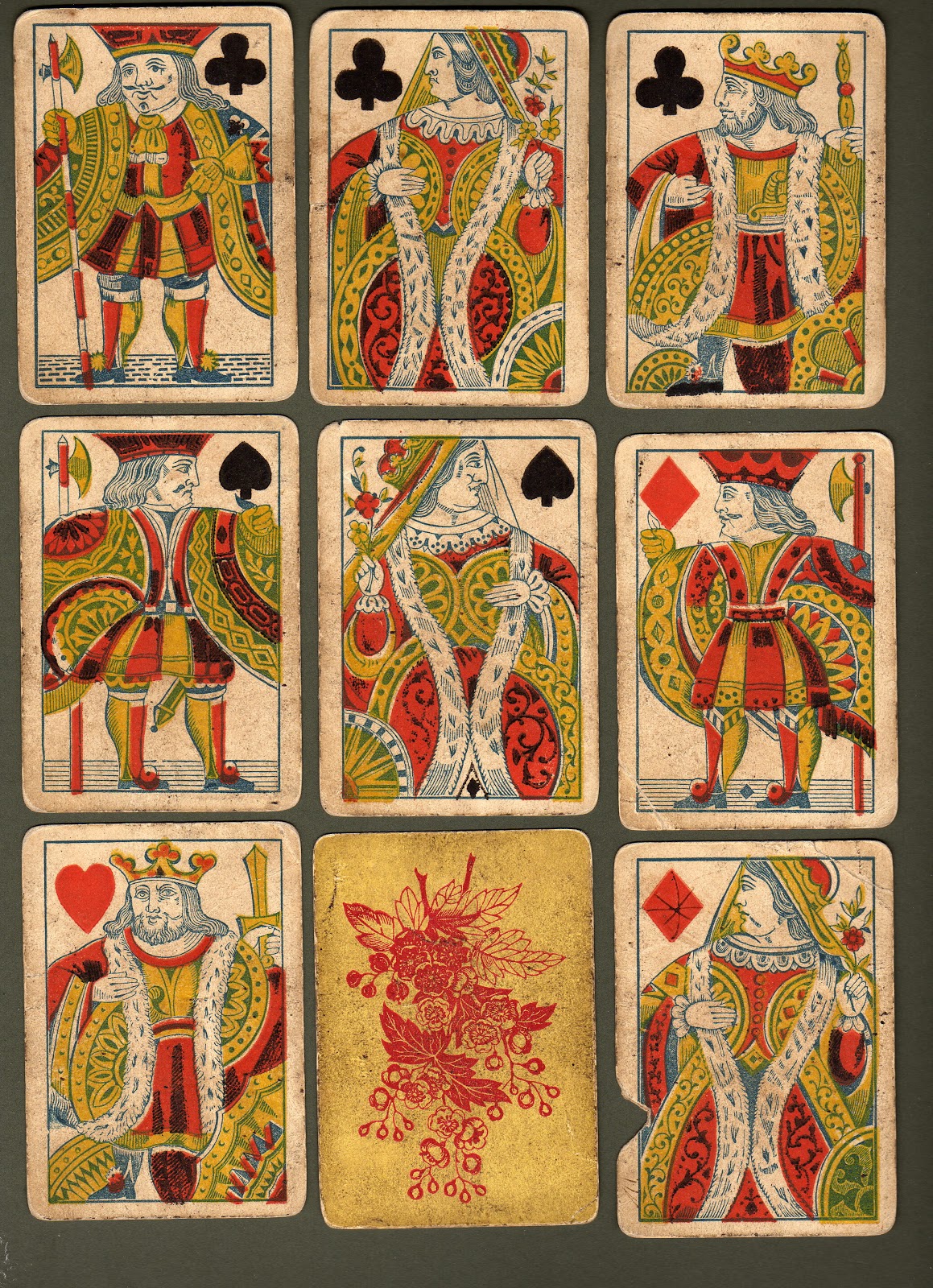 I can't find any evidence of a connection between De La Rue and Dougherty, but their early cards are very similar. Do any of our American collectors know of any connection?

In addition I've got a similar pack in which the two black queens have their traditional postures; unfortunately, three courts are missing, so I don't know what the other two queens were like. But it shows the clear Crehor/Dougherty connection in that there are packs with the above courts and a Dougherty AS (see Paul Bostock's website Plainbacks, item I80). 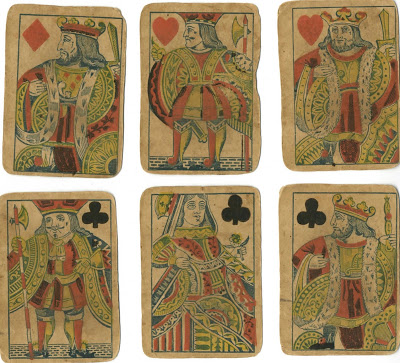 Another example comes from Samuel Hart. The pack designated NY37 by Hochman comes with various court types (see page 7 of the blog)► This one is based on De La Rue's D4.1. 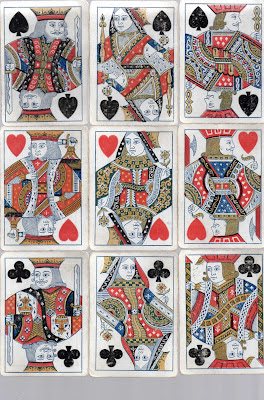 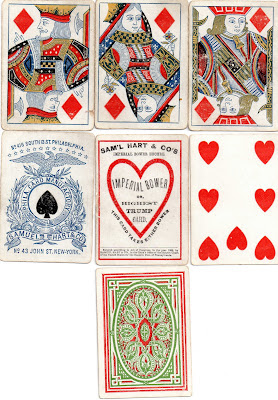 The more I look at American and Canadian cards, the more complicated the picture gets. The complicated nature of the North American playing card scene is well documented in Tom & Judy Dawson's reworking of Hochman's Encyclopedia. Since I've seen more examples since completing my book, which contains a section on US cards, I need to revise and expand on what I presented there. An article by Paul Bostock and me has appeared in The Playing Card, Vol. 41, which sets the scene for the first half of the 19th century, but in the second half of that century more and more card-makers appear on the scene, and a lot of them were swallowed up by competitors. The biggest swallower was the United States Playing Card Co. This is often reflected in the use of the same court cards in packs with different company names. (See page 43)►

In addition there was a lot of copying of designs going on, so similarity may or may not indicate that the same firm was involved in the production of such similar courts. And on top of that, designs were often cannibalized into new ones. For example, in c.1863 Lawrence & Cohen produced a double-ended version of their courts with the heads of US8 and the clothing of USD4.1. We could designate this US8.1, but that obscures the relationship with USD4.1. 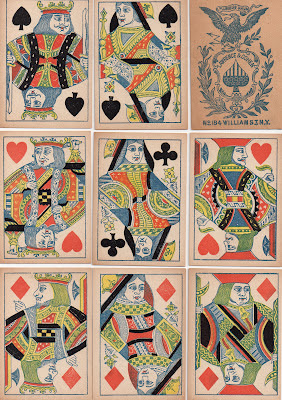 For comparison, here are an example of the USD4.1 clothing by Dougherty and the US8 single-figure courts by Lawrence & Cohen. 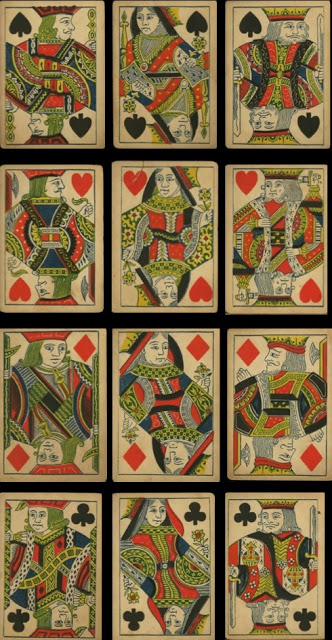 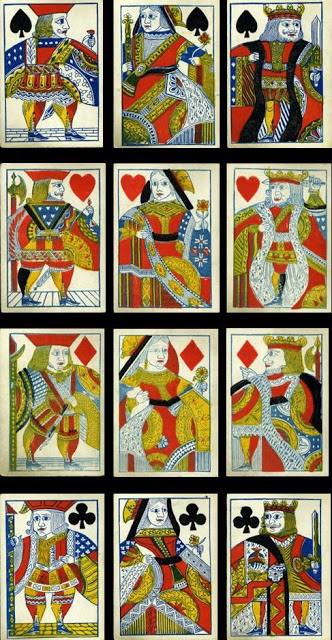 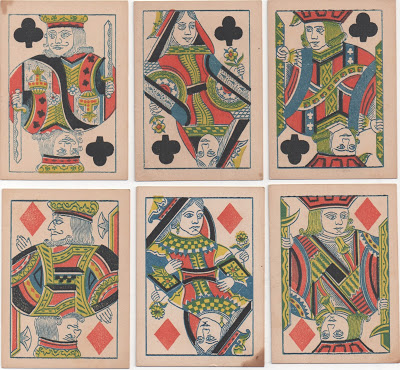 An interesting mix of De La Rue's D4.1 with crowns like those of Goodall's G3 was produced by Levy in the early 1870s. 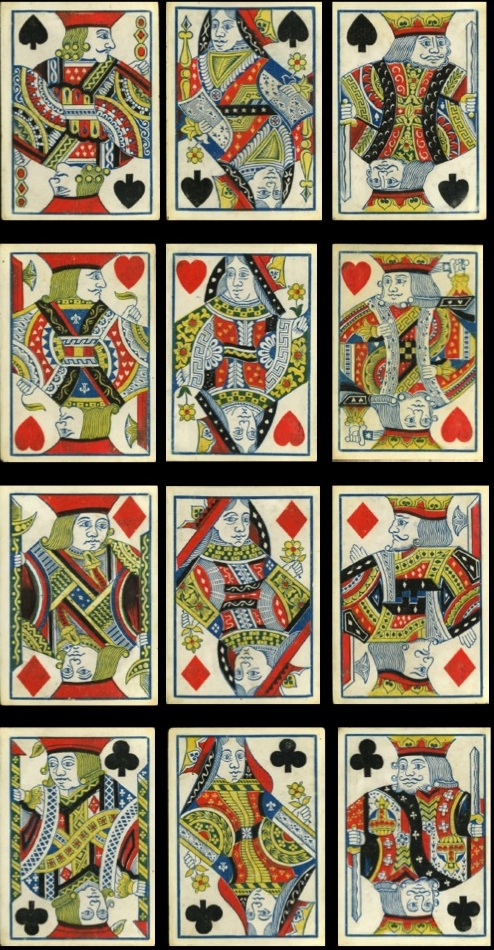 Here is a selection of other designs, some of which were taken over for a short period, before being replaced by one of the standard USPCC designs that emerged in the early 20th century (in my book: US3, US3.1 (bridge width), US4, US5 (bridge width) and US7). (See further page 43)►

Perfection Playing Card Co was taken over by USPCC and their own courts were replaced by those of the National Card Co (US2). 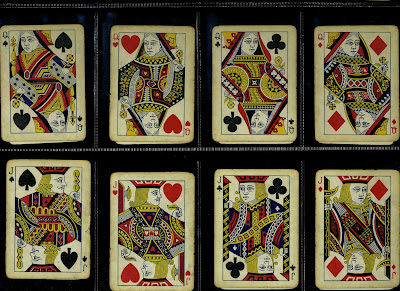 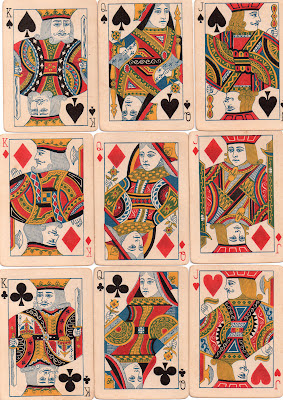 The Standard PCCo also had its own courts similar to those of USPCC's US4, in two sizes, but shortly after their take-over Standard packs had the ordinary USPCC courts. 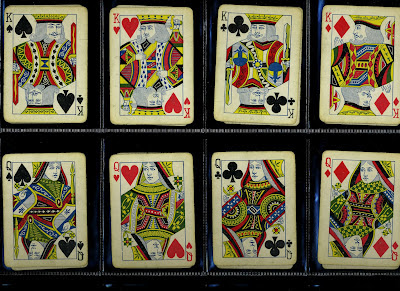 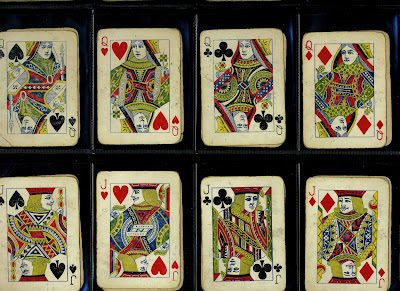 Two versions of Standard's own courts

Canadian cards often copied their American neighbours, even before they were taken over eventually by USPCC. Also the Midland PCCo had its own version of the mixture of US1 and US4 that really deserves a separate classification. 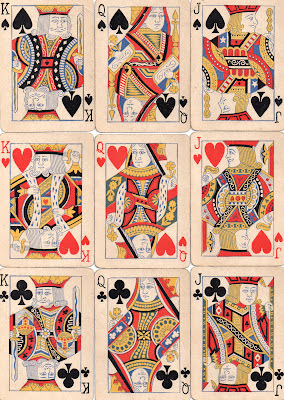 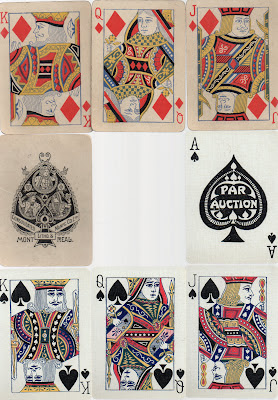 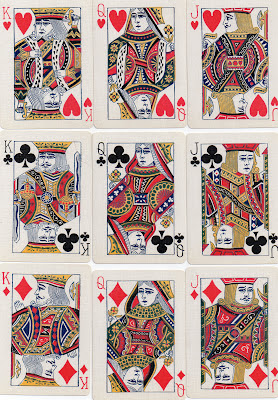 As an added complication, I have a pack with the CLMC courts, but with a Bay State Card Co. AS: the brand is Fast Mail #44 with a railroad back, a brand marketed by Standard PCCo.

And finally, EUREKA!! I've identified a single card I've had for quite a long time, which I put in my book as an unidentified QH (UM4): it's by the American PCCo from c.1880, and I now have a full court set. 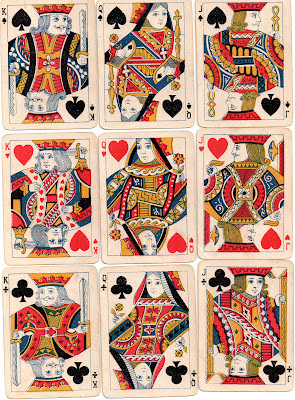 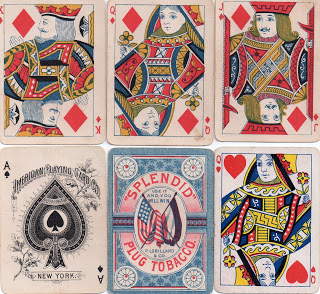 No doubt an American collector could have told me that, but now I know anyway!

A recent acquisition gives an intriguing glimpse of US cards imported into England. There are two packs by Samuel Hart/NYCCC with different courts and ASs in home (not import) tax wrappers showing that Mudie & Sons of London must have bought once-used club cards from the US and resold them as secondhand cards, as specifically indicated on the wrapper. Has anyone else got any wrappers that refer to the secondhand trade? 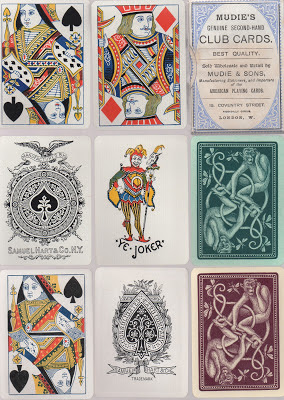 For much more information about North American cards and their makers, see Tom and Judy Dawson's site: http://shop.conjuringarts.org/store/pc/Hochman-Encyclopedia-c182.htm►