Wherever in Western Europe man turned his eyes, he was confronted by the majesty of the church. Everything he did was approved or disapproved, blessed or cursed, interpreted and solemnised by the Church. He was baptised by it, married by it and buried by it. He called on angels, saints and martyrs for help, visited shrines and holy wells, made oaths on sacred relics. The Church dominated men's minds and imagination.

The Church took a strict, prejudicial view on what it saw as lewd, frivolous, fickle or dishonest behaviour. Members of the clergy would certainly not approve of card playing if it had anything to do with gambling or fortune telling. Moralising tracts were published expressing disapproval of gambling as a mortal sin which might offend God and destroy lives, sometimes reaching the invective of fundamentalism.

The early engravers and print makers made devotional images for pilgrims as a cheaper alternative to paintings or books. Many of these craftsmen also turned their hand to manufacturing playing cards to earn extra income. Stock images from the repertoire of devotional imagery might be adapted to serve as playing card symbols. However, playing cards have not always been amicable bedfellows with the church.

Left: Unter of Acorns, Unter of Leaves and the Deuce of Acorns from The Spiritual Deck of Cards published in Germany as a book, c.1545. The suit suits and values are related to spiritual interpretations: "Abimelech / son of Gidion / crowned to be King under an oak tree", and on the Unter of Leaves, which suit is also called 'Green' in German: "The prophet Jonas below a green tree of pumpkins", or in the third example, the Deuce of Acorns: "The lost son who came into extreme poverty because he left his father, so that he desired to eat the swill from the sows' trough together with the pigs… as a warning for all bad children to behave properly for their parents". The pictures are not always sensitive, and the sermon book also contains bad anti-semitism, as the Deuces, with a sow on all cards, give reason to make comparisons with the "Jewish People in the New Testament". On the Deuce of Bells, a sow, the 'Jewish Sow', is butchered, and the comment is "Hasn't deserved anything else".

If we search on the Internet for topics such as “the devil's bible” or “the devil's picture book” there will be many pages expressing a wide range of opinions and viewpoints concerning dangers of playing cards, including in some instances false information without any factual basis. We hear in the news about religious groups holding intense emotional beliefs regarding their chosen faith. Playing cards or tarot cards can antagonise or anger some people.

In 1894 William Ramsay designed playing cards to impart religious instruction, “designed to supersede useless card-playing” and “fastening the great truths of the Bible ... in the minds of the players.”

The original patent specification can be viewed here► 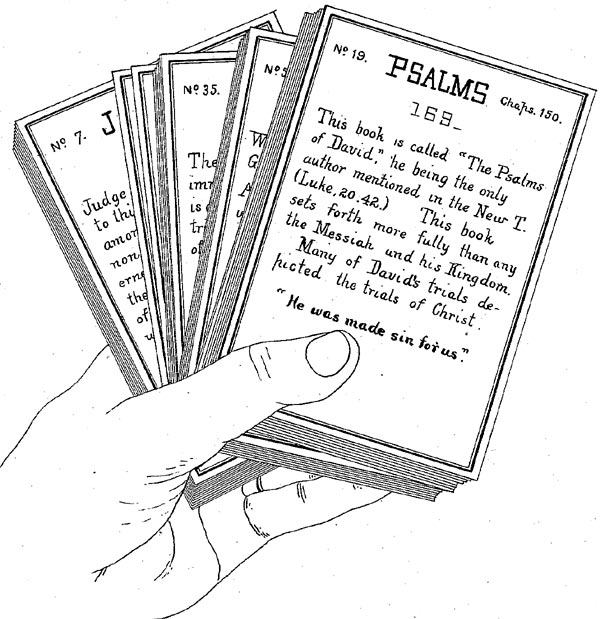 Round the World Families

Round the World Families published by the London Missionary Society, c.1945. The story of “Pilgrim’s Progress” by John Bunyan illustrated in a card game published by Castell Brothers Ltd (Pepys Games), 1938. Judaism is the oldest of the great monotheist religions, parent of Christianity and Islam. Geistliche Karten, Augsburg, 1718. Each card carries a text in Gothic typeface giving advice regarding what to do and think each day. Not quite oracle or divination cards, they are more like 'a motto for the day' collection. The method of using the cards is not known. My creativity proved useful in the Primary School classroom and children's clubs I run at Brooke Baptist Church in Norfolk...