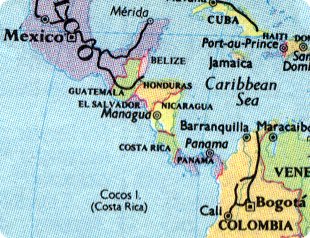 After arriving in what was named the ‘New World’, the Spanish sent expeditions to Guatemala, beginning in 1519. Before long, Spanish contact resulted in an epidemic that devastated native populations. During the colonial period, Guatemala was an Audiencia and a Captaincy General (Capitanía General de Guatemala) of Spain, and a part of New Spain (Mexico). The region was not as rich in minerals (gold and silver) as Mexico and Peru, but its main products were sugarcane, cocoa, blue añil dye, red dye from cochineal insects, and precious woods used in artwork for churches and palaces in Spain. In 1583 one Alonso Martínez de Orteguilla was authorised to administer the manufacture and sale of playing cards in New Mexico (which included Mexico, Nicaragua, Guatemala and Honduras). Playing cards were supplied from Spain and France, as well as manufactured in Mexico under licence.

In recent years packs have been published in Guatemala by El Cuervo y Cia, Promotora Continental and ‘Juegos El Borrego’.

Above: box, Ace of Spades, back and extra card from French-suited pack manufactured by El Cuervo y Cia., Ltda, Guatemala, c.1970s. The extra card has a short text speculating about “the origin of the deck of playing cards”, which is stated as being either of German or Spanish origin, or possibly even as old as the game of chess, and also the origins of the four Kings, Queens, etc.

The Mayans lived in Guatemala, Honduras, Belize, the southern part of Mexico and northern parts of El Salvador until European settlers arrived. Spanish-suited playing cards made on rawhide and said to have been used by Chilean Mapuche Indians, XVI-XVII century

The designs of Mayan artists shown here give a general idea of their enormous artistic and cultural potential. MEXICO shares a long tradition with Spain in the field of playing cards. The Estanco de Naipes (playing-card monopoly) was established in 1576. Playing cards had been introduced to the Americas with explorers such as Columbus or Cortés, whose fellow countrymen were keen gamblers. Cards were imported from Spain since the 16th century. Local production usually imitated Spanish cards. Tacuabé was a Charrúa native from Uruguay, an indigenous tribe that became extinct following European conquest and colonisation.