All of the items in this article are taken from my own collection of whist and gaming counters/markers put together to demonstrate their evolution from the 18th Century to modern times.

Card games and various forms of whist have been around in Britain for hundreds of years. The earliest form of scoring was with the use of counters. My earliest examples dating from the 18th Century are ornate mother of pearl counters imported from the Far East in a wide variety of shapes. Crafted between 1720 and 1840, the best ones are highly decorated with patterns, scenes, animals and birds, coats of arms and the like, and justify very close inspection. 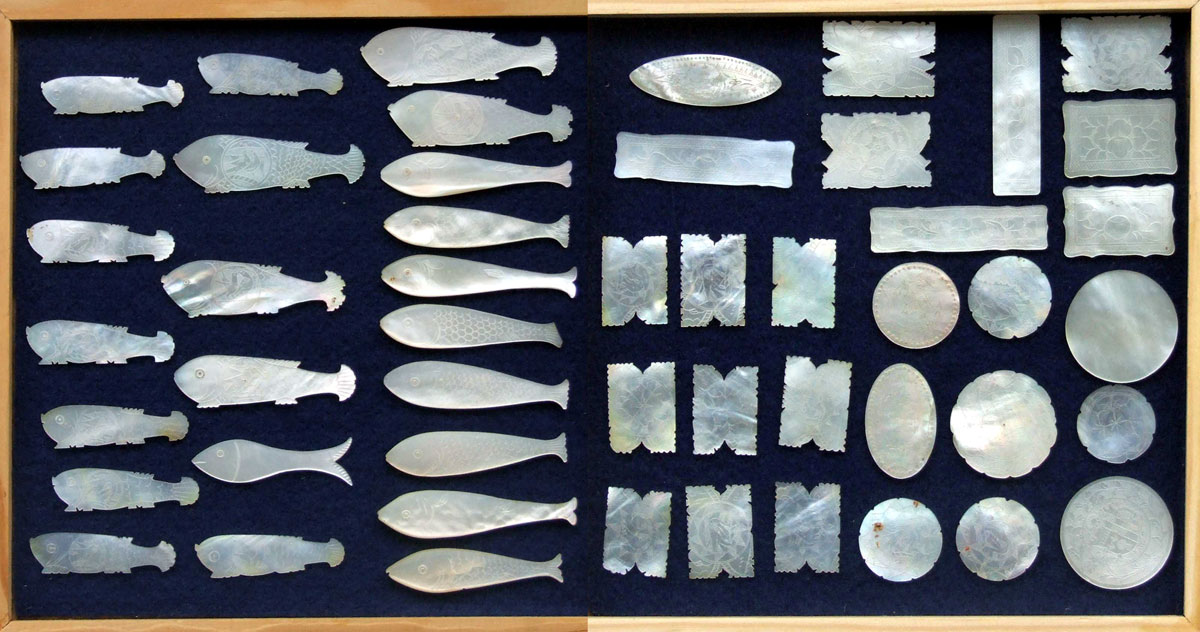 Above: 18th Century ornate mother of pearl counters imported from the Far East. These particular examples were crafted by Chinese artisans between 1720 and 1840, chiefly for trade with Great Britain, and were used in all the fashionable card games of the period for scoring. Click image to zoom.

From about 1840, whist became the game of choice for socialising and gambling, so production and importing of the delicate style of counter declined in favour of more hardy alternatives.

Above: bone markers and from the 1840s metal counters came more into fashion. By 1850 this delightfully inscribed “Keep Your Temper” token and “To Hanover” were commonplace.

Above: some brass tokens were elaborately designed in such a way as to distinguish them easily from the coins of the realm. This one, produced sometime after 1870, is inscribed with an early advert for J. Sainsbury!

I am still in search (at a reasonable price) of a set of four counters in a purpose-built container (sometimes in metal, frequently in ivory) with one, two, three and four dots used for “Hoyle’s Method” of scoring. Using these counters in appropriate combinations every score from one to ten can be shown ie. 3 + 4 = 7, 2+3+4 = 9 etc.

Even coins without dots 1 to 4 were frequently used in fours to reduce the number of counters deployed at any one time. Blank markers (or inscribed with “Keep Your Temper” or similar homilies) were arranged in two rows. Each coin on the top row indicated three points, each on the bottom, one point.

All of these tokens were capable of being used in a wide variety of gambling card games associated with the period. But as whist began to take over as by far the most popular social gambling card game, markers were designed specifically for this purpose. This ebony and ivory example is typical of markers produced for “long whist” (see below) from the early 1800s.

Above: Long Whist markers in the early-Victorian period became very finger pointy. These are in rosewood and ivory and a similar design in brass was fairly common. These look identical but on closer inspection they can be seen to work rather differently. On the first, the hand alone moves on a central pivot while on the second brass one the ring of numbers rotates around a hand fixed to the base. Both have similar markings on the back, indicating their purpose. 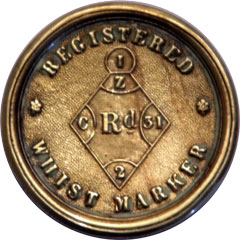 From 1842 to 1883 all new registered designs were required to carry this “kite” mark, confirming that they are registered and the date, in both cases above, is 31st January 1860 (click image to zoom).

By the middle of the 19th Century, however, the traditional “Long whist” method of scoring was rapidly being overtaken by a shorter version of the game. Long whist was played until one side or the other reached a score of ten points and the rubber was won by the first side to win two games i.e. 2 - 0 or 2 - 1; Short whist became more popular because it was played to a score of only five and was completed, for gambling purposes, more quickly.