COLUMBUS landed in Honduras in 1502, the Spaniards completing the conquest of the country in 1522. Thus Honduras shares a long tradition with Spain in the field of playing cards. The Spaniards were fond of gambling and brought their dice, cards and recreational games with them. In 1583 one Alonso Martínez de Orteguilla was authorised to administer the manufacture and sale of playing cards in New Mexico (which included Mexico, Nicaragua, Guatemala and Honduras). Any local production was effectively suppressed and cards supplied from Spain or Mexico.

Above: throughout the 16th - 18th centuries packs were imported from Spain or Mexico, following Spanish taste and traditions of the day.

In 1821 the states of Guatemala, Costa Rica, Honduras, El Salvador and Nicaragua achieved independence from Spanish rule and formed the Central American Federation until 1838, when the independent Republic of Honduras was established. There has been some local production, following Spanish designs, but most playing cards are imported into Honduras. 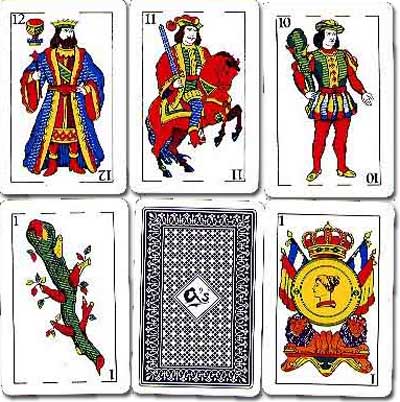 Left: pack made in Honduras based upon the Spanish Catalan pattern, and with a slightly modified ace of coins so that the Honduras flag is shown draped behind the Spanish one.