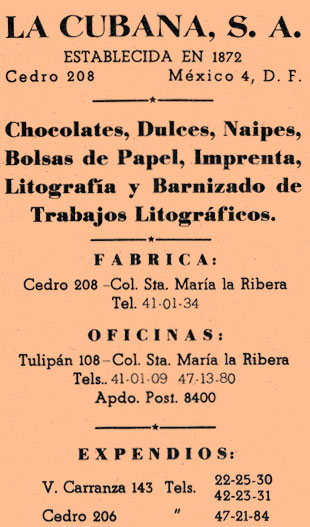 LA CUBANA were successors to P. Munguia, who were founded in 1872. This information is usually stated on the four of coins or cups. The date of transfer of the name is believed to be around 1940. Also, the trade mark "El Aguila" often appears on the ace of coins. The price list inside their 1962 catalogue gives all the various types of playing cards produced at that time, as shown in the list of links above, as well as other speciality items such as chocolates, paper bags and lithographic printing services. It can be seen that La Cubana produced several versions of the Spanish Cadiz style amongst their range. Other brands not included in this catalogue are: “El Águila Nueva” (new design), “El Turco”, Naipes “Mignon” (earlier versions), the later standard English packs and several Jumbo Index editions (“Numerus Magnus”). Packs of seconds (slightly damaged cards) were also sold, called “Tripulo”.

Various addresses are given for the factory, the administration offices and other sales outlets (above left) which over the years also appeared on the cards and wrappers giving the impression that the business kept changing address. At some more recent date the company name changed to “La Cubana, S. A. de C.V.” and the factory address changed to: Nogal No.187, along with new fax numbers. The company finally closed down in 1995 thus bringing to a close Mexico's longest standing playing-card factory.