33 fragments of playing cards and 2 dice were unearthed in a 16th century rubbish tip adjacent to a Spanish house in the lower Rimac Valley in Peru, providing evidence of games played by early Spanish settlers. In amongst the rubbish associated with the cards there was also a paper document dated 1516.

The cards are from more than one pack, and fall into two groups. The first group comprises cards of the archaic Spanish-suited "Dragon" type of pack, whilst the remaining cards are of a different early Spanish-suited pattern. Together these cards provide stunning evidence of early Spanish playing card production exported to Central and South American countries very soon after the 'discovery' of the New World. 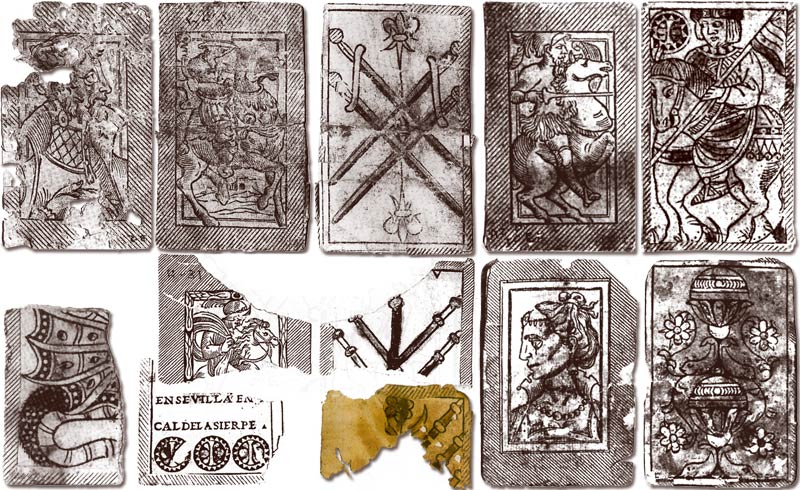 Above & Right: fragments of playing cards of the "Dragon" type made in Seville (Spain) discovered in archaeological excavations in the Lower Rimac Valley, Peru, during 1964-66. The backs of the cards, showing warriors and portraits of individuals in 16th century European fashion, were designed to wrap around the edges of the cards thereby providing a border around the fronts. This can be seen on the four of swords, the cavalier of coins, the two of cups and the fragment of the "Dragon" Ace at the lower left. The inscription "En Sevilla en Cal de la Sierpe" appears on one card. The two of cups is supported on two tiny dolphins. [Source of images: Cárdenas Martin, 1999]

The fragment of the King of Swords (right, enlarged) shows that the quality of the woodcutting is very fine and detailed. The colours used are: black, red, blue and ochre. These cards are example of a distinctive pattern known as "Dragon Cards" owing to the winged dragons or sea monsters on the four aces. The kings are seated on thrones. Cards such as these have been found in various parts of the world, having been exported by early Hispanic colonisers. Early Spanish/Portuguese type playing cards found in Netherlands →

This pattern has long been extinct. A fine example is preserved in the Archivo de Indias in Seville manufactured by Francisco Flores, along with a sheet of similar allegorical back designs with Mexican imagery, and the contract for one Alonso Martínez de Orteguilla to administer the manufacture and sale of playing cards in New Mexico in 1583 (see mock-up of four cards shown below). The deduction which might be made is that cards like these were being manufactured in Spain and exported into the newly colonised 'New Spain' since some time in the 16th century, possibly as early as 1516.

Below: 5 cards from the second set discovered in the excavations, which belong to standard Spanish-suited packs of the day. Only the right-hand card appears to have the 'turned over' edges as in the first set, and they are of a simpler design on the front and back, which would amount to efficiency gains in production. Unfortunately no court cards are available to identify the pattern, but they are consistent with other known 16th century examples. As it happens, Seville was an attractive destination for gamblers during the sixteenth century   learn more →