Playing Cards in Singapore, one of the Four Asian Tigers.

Singapore had been a part of various local empires since it was first inhabited in the second century AD. It hosted a trading post of the East India Company in 1819 with permission from the Sultanate of Johor. The British obtained sovereignty over the island in 1824 and Singapore became one of the British Straits Settlements in 1826. Occupied by the Japanese in World War II, Singapore declared independence, uniting with other former British territories to form Malaysia in 1963, although it was separated from Malaysia two years later. Since then it has had a massive increase in wealth, and is one of the Four Asian Tigers. 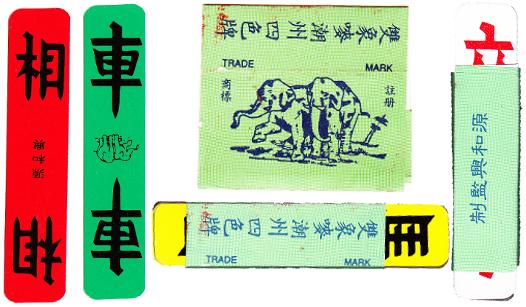 These cards are called "四色牌" in chinese, a term that literally translates as "four colour cards". These cards are relatively common in the country, and are used to play a rummy-like game. The deck has 112 cards, namely seven ranks in four colours, each card having four copies of itself. The cards pictured here are manufactured by the "double elephant" brand in Hong Kong, and are of slightly higher quality than the more common "double dragon" brand, although more expensive. This deck is the most common variety, although there exist other, rarer varieties, like ones with an extra five cards (I am informed that these are jokers), and a curious incarnation which goes under the name of 十五湖牌 (fifteen lake cards) which are the cards engraved on mahjong tiles,   see more →

Above: “Old Maid” children's card game from a range of games manufactured by Hee Trading Co., Malaysia, 1984. These cards have been used in Singapore for about 50 years and have become naturalised there. Images kindly supplied by Anthony Lee.

Above: deck of cards given to passengers by Singapore Airlines. The pattern is clearly a non-standard one, but note some hints of the traditional english pattern shining through: the King of Hearts still is depicted with the sword behind his head. The deck is of 56 cards: 52 cards with 4 identical jokers. Images kindly supplied by Anthony Lee. 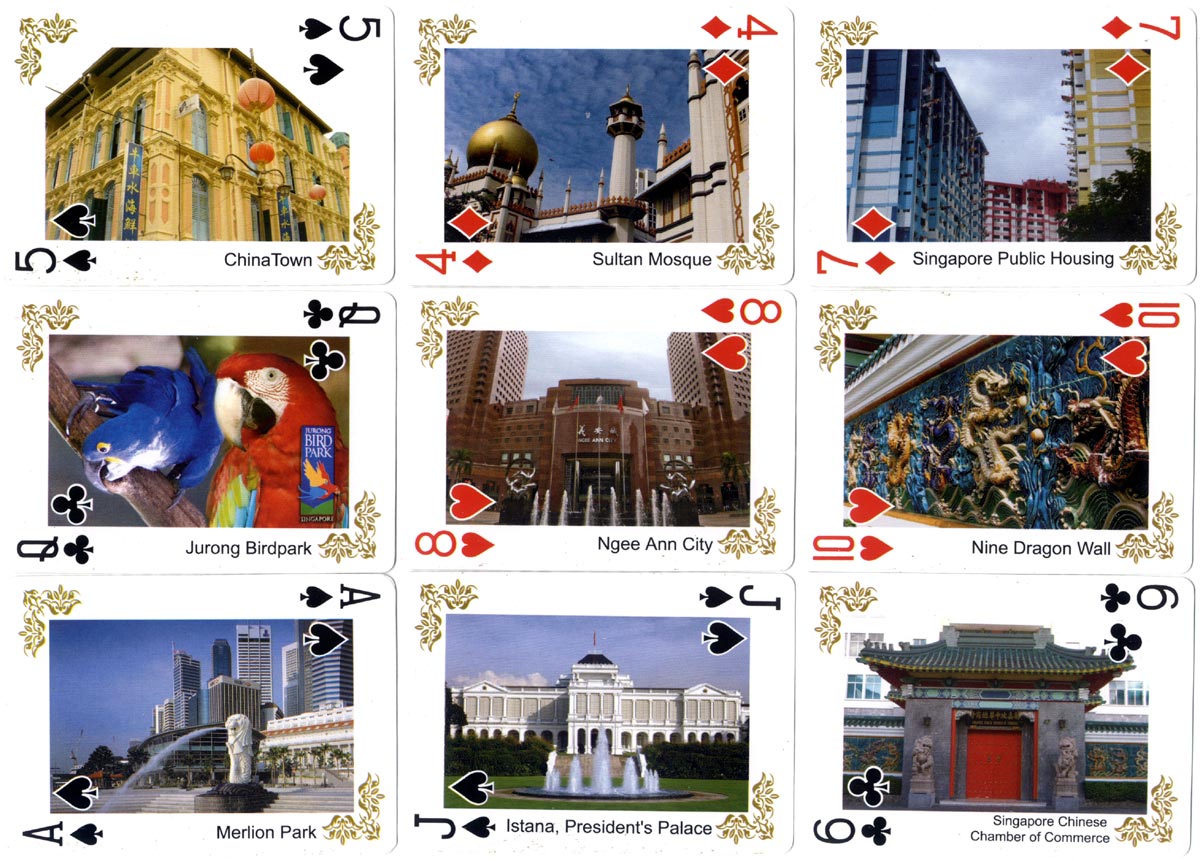 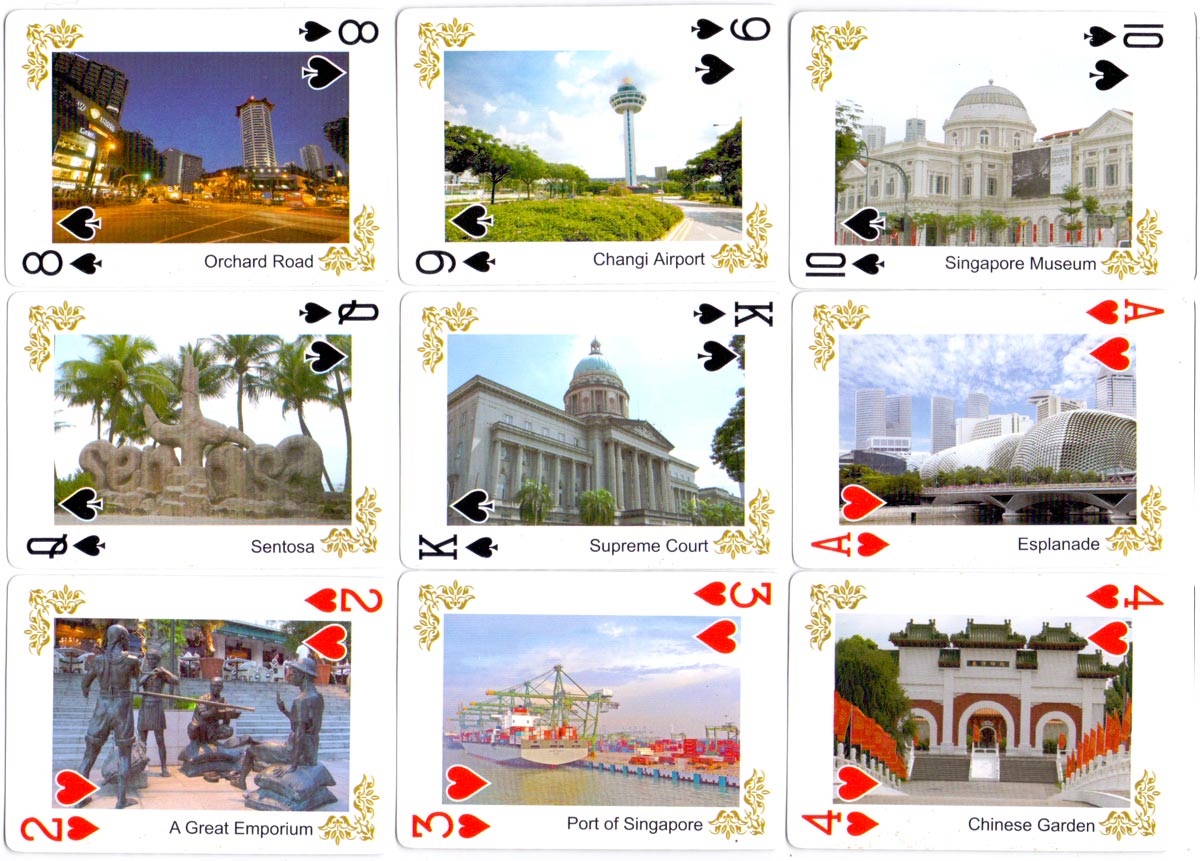 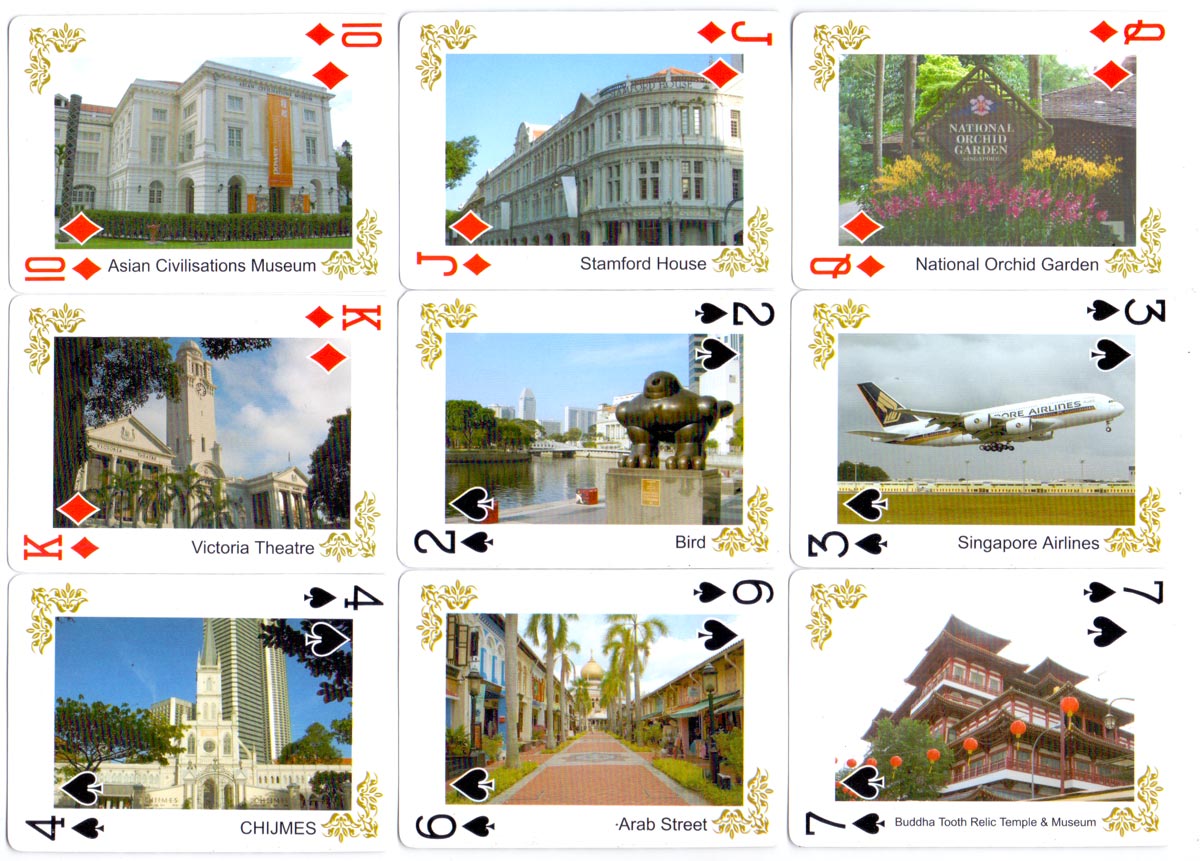 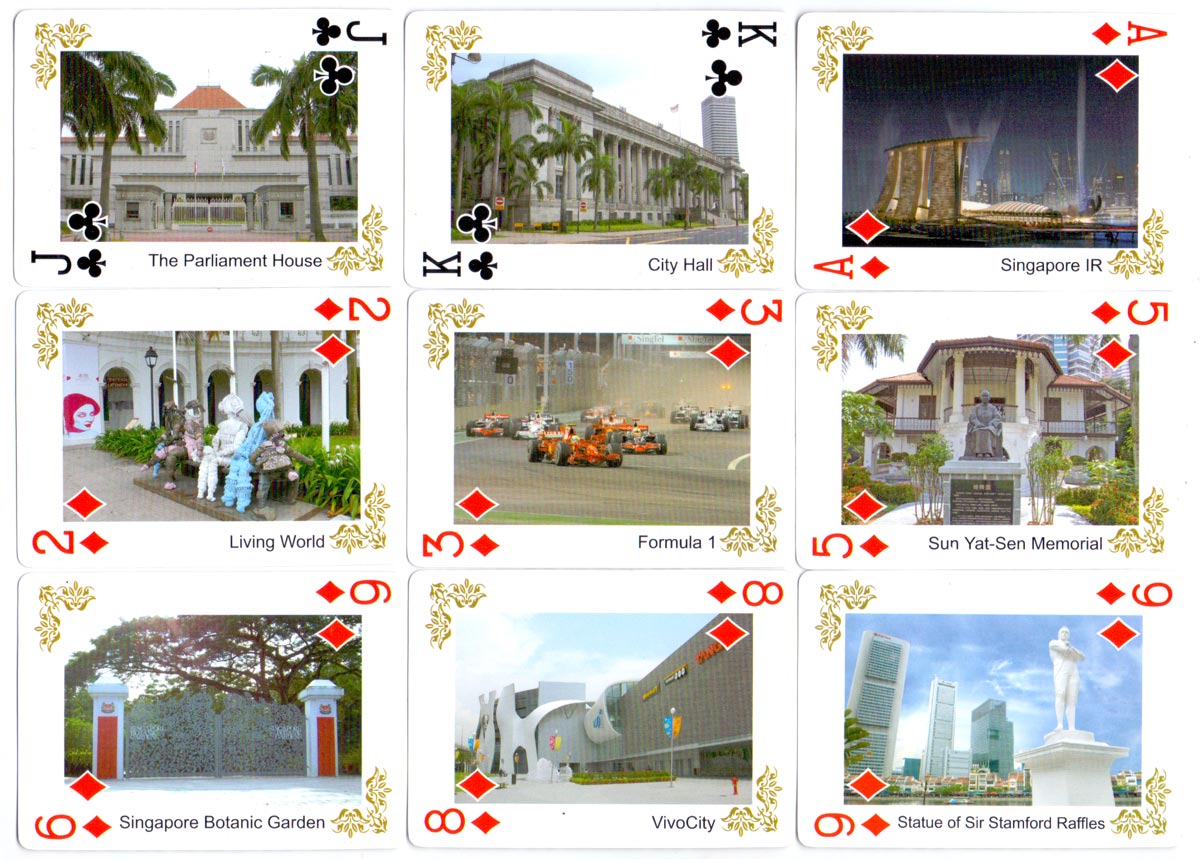 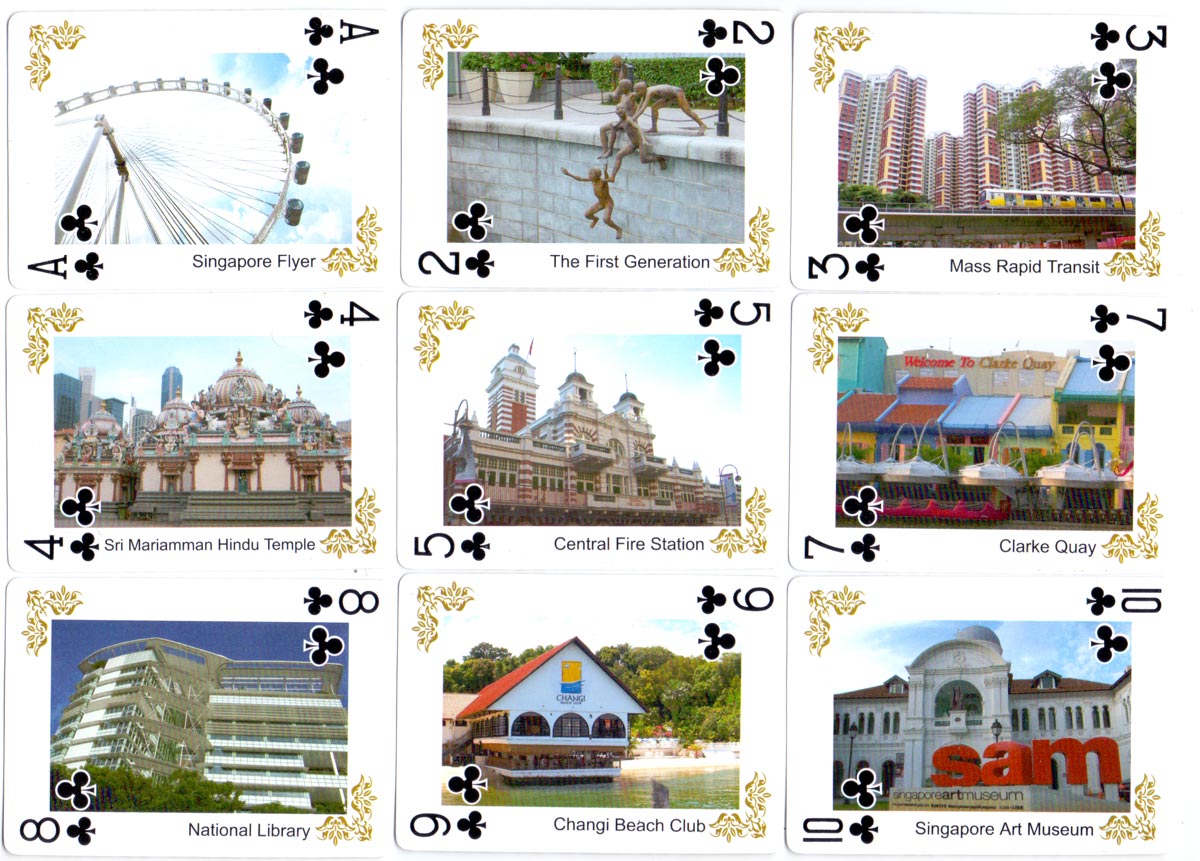 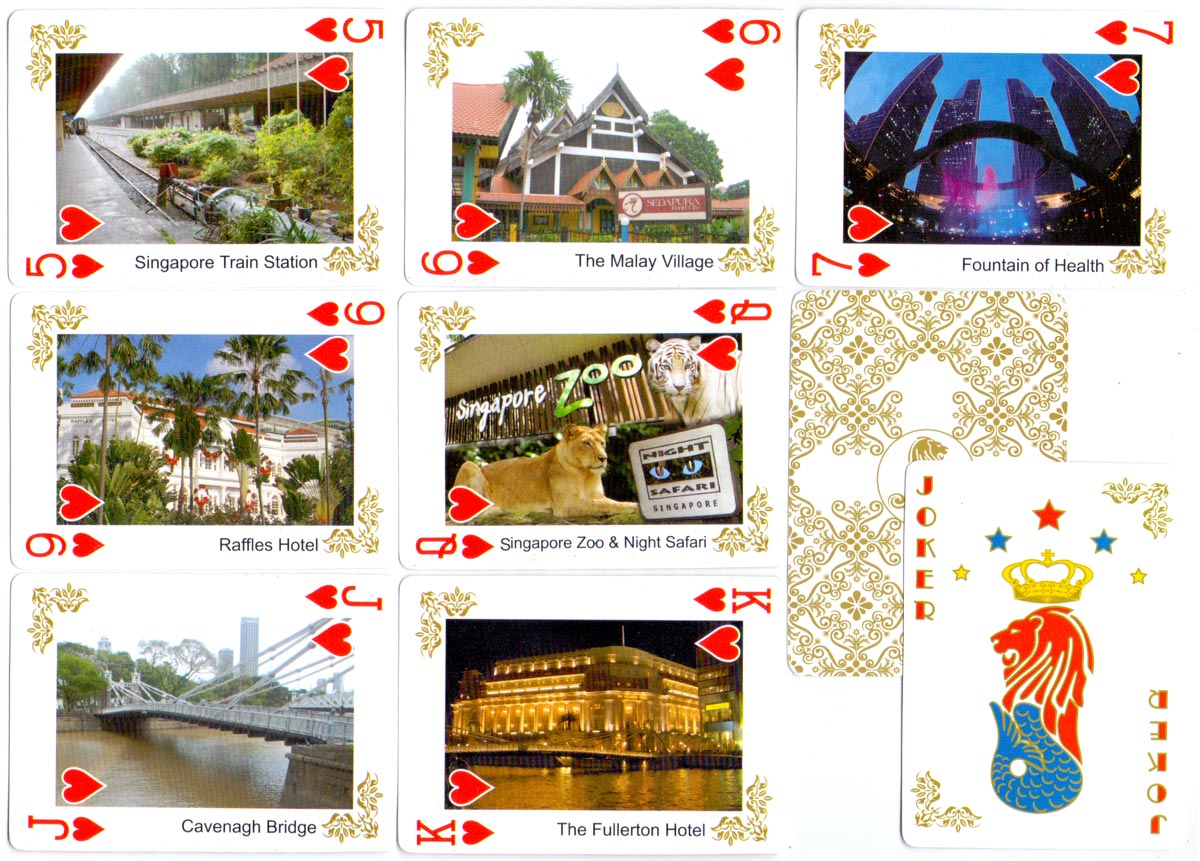 Above: Singapore souvenir playing cards, 52 cards + 2 jokers in special tin, published by Intersection & Union, © I & U. 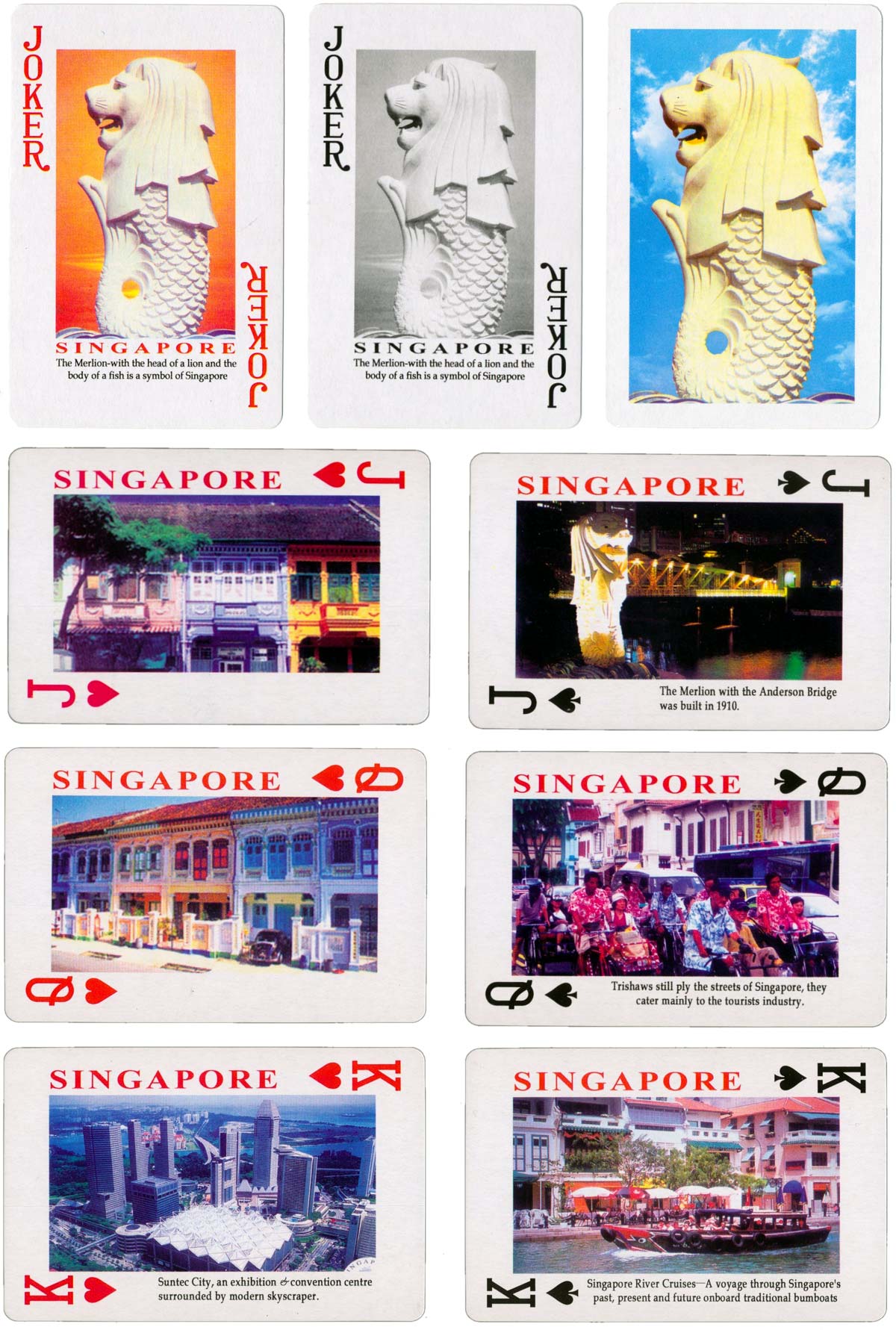 Above: Souvenir of Singapore playing cards featuring the Merlion on the jokers and reverse. Unknown manufacturer. Images courtesy Matt Probert. 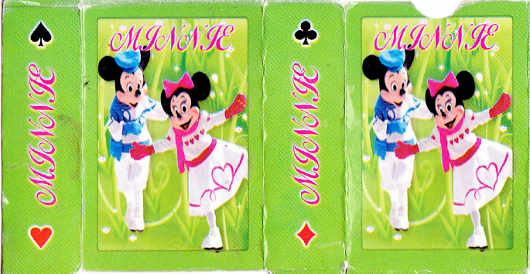 Tô Tôm is played with a 120-card Chinese-style deck.

Tam Cúc playing cards from Vietnam, based on Chinese chess, 2016

Although many people would not consider Chinese cards worth collecting, the huge variety of court designs used by the companies based in China, Hong Kong and Taiwan over the years should be of interest to those who like to enjoy variation in court cards, jokers and aces of spades.

Deck made in China in c.2010 advertising the Chinese brew “Lucky Beer, the enlightened beer”

Each card has a different photo of elements of the terracotta army whose purpose was to protect the emperor Qin Shi Huang in his afterlife.

Each card in this novelty deck, subtitled “Funny Card”, carries information about a prestigious or popular brand.

3: 20th/21st Century Variants including some from China

I expect most collectors ignore cards made in China for export. It's true that many of them are close copies of American models, but there are also some interesting, even peculiar, redrawings of the standard English pattern.