Simeon Durá of Valencia was one of Spain's most distinguished playing card manufacturers, flourishing between 1871-c.1940. In the same league as Naipes Comas (Barcelona) and Heraclio Fournier (Vitoria), it is believed that Simeon Durá learnt his trade whilst serving as an apprentice with Manáut Hermanos, another playing-card manufacturer located in Valencia. When Manáut Hermanos ceased trading in 1871, Simeon Durá opened his first playing card factory just around the corner, in calle San Vicente 116. Soon afterwards his address changed to Guillem de Castro 130, Valencia. By around 1890 Durá had completed an extensive new factory in Arrancapinos No.29 (renamed Angel Guimerá in c.1930).

Durá's early production followed the same designs which had been used by his predecessors Manáut Hermanos but soon afterwards he commissioned artist E. Pastor to create a range of new, distinctive designs. At the same time Durá acquired modern lithographic printing equipment enabling him to compete effectively with other leading players in the market, and to produce his impressive range of highly artistic designs in high quality.

Above: Simeon Durá's 'El Cid' fantasy Spanish-suited playing cards, designed by E. Pastor, c.1875. These were the first in a series of outstanding designs which Simeon Durá developed over the years to replace those of Manáut Hermanos and to raise his status amongst the public. (Click image to see more).

The imposition in 1904 of tax on playing cards by the Spanish government was a severe setback for playing-card manufacturers, and prices almost doubled as a result. This situation encouraged Simeon Durá to diversify and to undertake various other general printing jobs including posters, picture cards, relief prints and boxes. The bullfighting pack (shown below) was produced during this era. 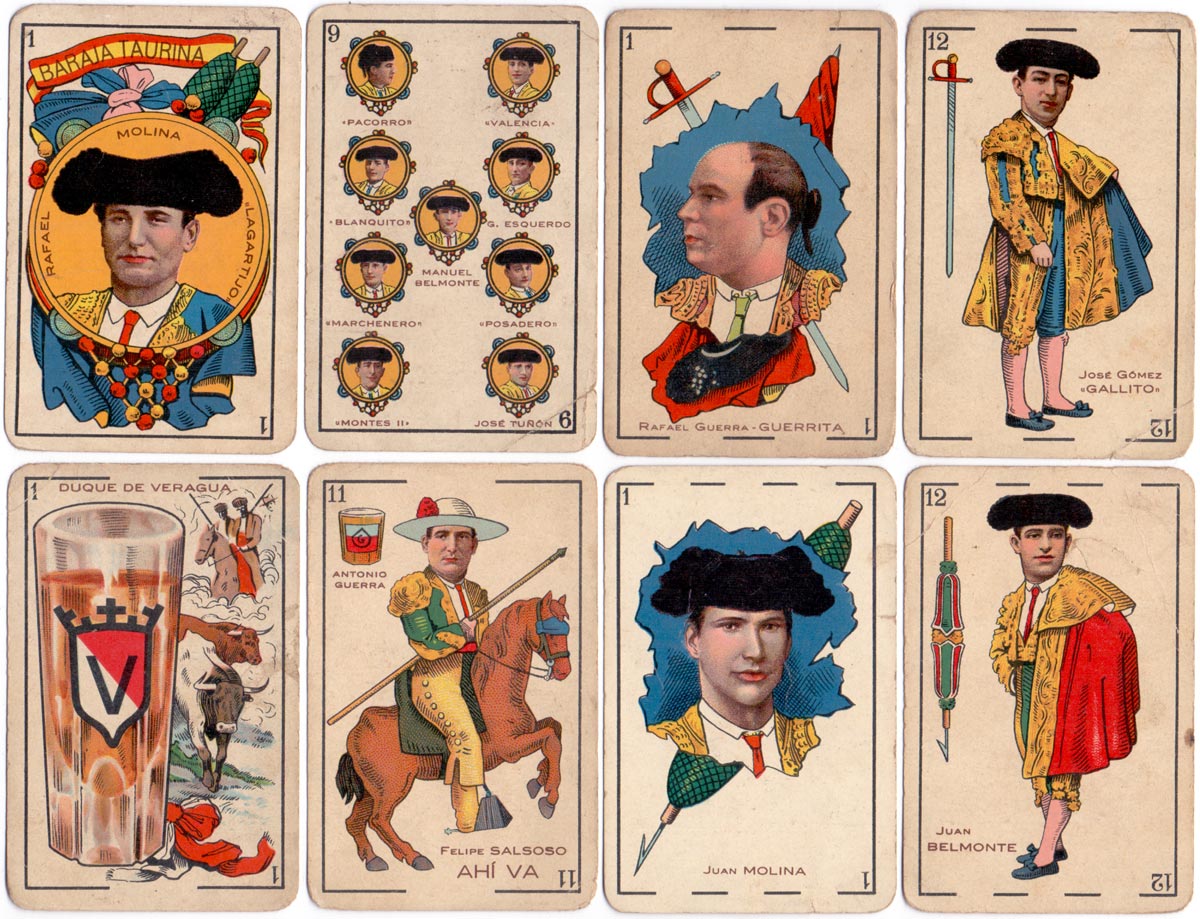 Above: Simeon Durá's 'Baraja Taurina' was in print from 1916 until the 1930s. It was printed with either square or rounded corners and with various backs, including advertisements for Chocolates Angelical, Barcelona, featuring bullfighter photos on the reverse  more →

In c.1931 the company name changed to Hijos de Simeon Durá. However, the Spanish civil war adversely affected the company's fortunes from which it never fully recovered and playing-card production was finally abandoned in the early 1950s. The company continued as a general printer until 1970.