Although playing cards may have first appeared in Italy or Spain, they very soon arrived north of the Alps. Alongside the printing of textiles, the humble woodblock prints of saints and playing cards were forerunners in the art of printing. Early literary evidence indicates that playing cards arrived in Switzerland sometime around 1376. In 1377 A friar from Basle by the name of John described a pack of cards [‘Ludus Cartarum’] in some detail during a sermon, and a great freedom was already apparent in the composition of the pack described by him. Brother John explained that cards were painted and played with in different manners. He also added that the new game was of advantage to noblemen and to others, especially if they practise it courteously and without money. We know from prohibitions that gambling caused concern to the authorities who sought to ban or regulate it because it attracted gamblers and cheats.

Brother John went on to say that there are four Kings depicted on four cards, and each one holds a certain sign in his hand and sits upon a royal throne, and under the King are two “marechali,” the first of whom holds the sign upright in his hand, and the other holds the sign downward in his hand.

The Swiss national suit system of shields, acorns, hawkbells and flowers emerged sometime during the fifteenth century from a multiplicity of suits which had evolved in the Upper Rhine region. A common feature of many of these early cards is that the Kings are seated on thrones while the upper and lower valets are standing, often holding their suit sign. Another feature is the ‘banner 10’ which was found in packs throughout the South of Germany and especially around the Alps in the 15th and 16th centuries. The banner 10 now only survives in Swiss playing cards and is more or less counted as an Ace.

An edict from Lyons in 1583 caused many French playing card makers to emigrate to Switzerland because of excessive duty on playing cards. And as new cantons joined the ancient Swiss Confederation they brought with them the customs of other lands: Italian-suited tarot cards and French-suited cards in the Paris and Lyons styles. 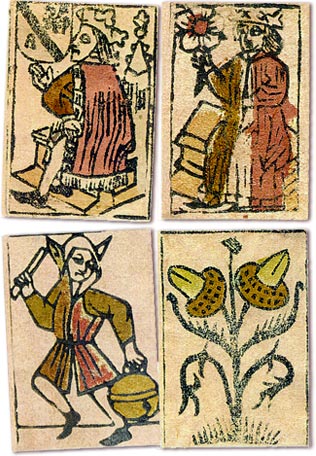 Above: early 16th Century Swiss playing cards produced by woodblock and stencil printing. The acorns seem to be growing on stems, unlike anything seen in nature.   see more → 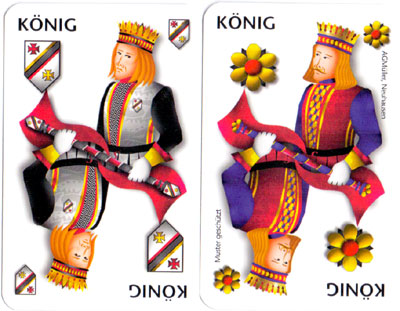 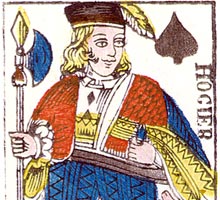 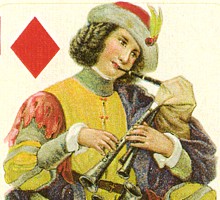 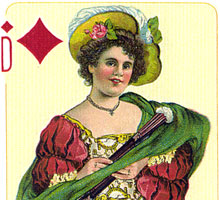 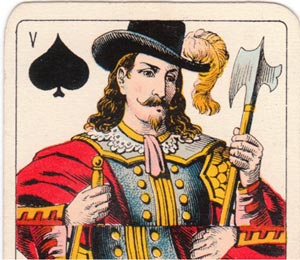 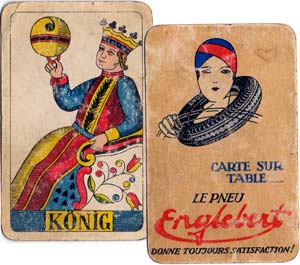 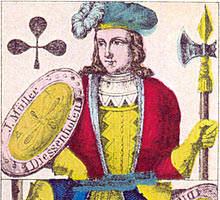 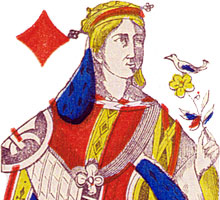 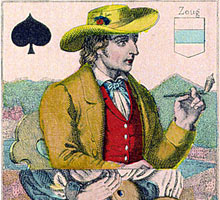 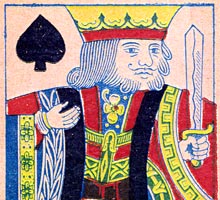 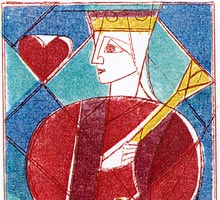 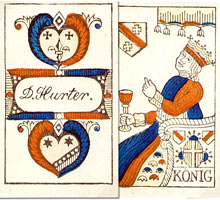 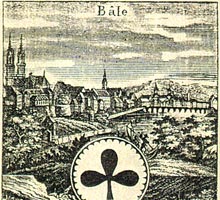 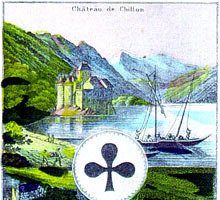 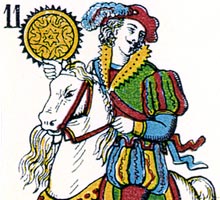 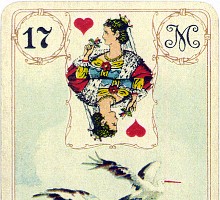 The distinguished firm AG Müller was founded in 1828 by Colonel Johann Bernhard Zündel (1791-1863) who opened a playing card workshop in partnership with the cardmaker Fizell, and in 1830 he employed Johannes Müller (1813-1873) for a four year apprenticeship. In 1831 Johann Georg Rauch (1789-1851) took over Zündel's factory and the business was relocated to Diessenhofen. By 1835 Müller had been promoted to foreman, by which time the factory was employing six workers and producing about 3,000 dozen packs of playing cards a year. A few years later (1838) Johannes Müller was fortunate to be offered an opportunity to buy the business. In due course Müller introduced machinery to assist with the production and in 1855 Müller expanded his range of goods to include railway tickets to meet the growing demand from the new railway lines being built, which coincided with the rise in tourism.

In 1863 Müller was able to purchase David Hurter’s playing card factory which had existed in Schaffhausen since 1793. Müller's son, Johannes Müller Jnr (1837-1901), who held the post of works manager in the factory at Schaffhausen, married Hurter’s daughter Anna Margaretha in 1865. When his father died in 1873, Johannes Müller-Hurter decided to close the Diessenhofen workshop and relocate the business to Schaffhausen. At this time the enterprise was equipped with the most modern machines available, which enabled Müller to widen his playing card range to include souvenir packs and playing cards destined for export to continents such as India and South America.

In due course, after the successful acquisition of another rival playing card factory, more spacious premises were obtained in Neuhausen-on-Rhine Falls in 1898. In 1901 the management of the factory passed to Müller's youngest son, Heinrich Julius Müller (1875-1948), who expanded the business output up to 100,000 dozen packs of cards. This success was achieved by renewal of the machinery as well as H. J. Müller's commercial skills, inventive talent and improvement in the quality of all products. New machines allowed twelve-colour printing which in turn led to a wider range of playing cards. A price list from 1922 mentions over 50 different types of playing cards on offer.

In 1960 the playing card factory in Neuhausen became AGMüller (Aktiengesellschaft - Public Limited Company). The old factory building had already been upgraded in 1954 and additional new offices were also built. As a result of the emergence of the esoteric use of tarot cards, the playing card factory expanded to become one of the leading suppliers of Tarot cards worldwide, which were above all exported to the United States. Further new buildings were erected in 1974/75 for this purpose.

By 1982 the pressure of foreign competition in the playing card market was being felt and the family decided to sell the entire business to Biella-Neher in Biel. The new owners of AGMüller concentrated fully on playing card manufacture. Urania Verlags AG was founded in 1988, based in Neuhausen, which became a world leader in the field of tarot cards and associated esoteric literature. However in 1999 the playing card manufacturing subsidiary was sold to Carta Mundi SA in Turnhout (Belgium). AGMüller in Neuhausen continues to supply tarot cards worldwide, with a range of well over 120 titles growing each year. 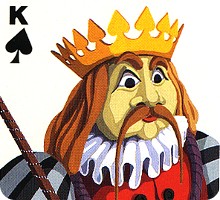 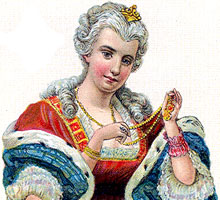 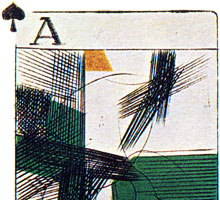 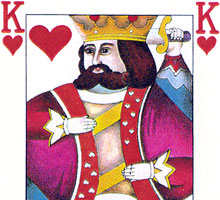