One Saturday in November 2021 I was cruising the charity shops of Eastleigh town centre when I noticed an old, pre-World War2, pack of cards carelessly tossed into a box of miscellaneous children’s toys. Picking the pack up I saw they were made by the New York Consolidated Card Company, but I choked upon seeing the £4 price tag, so I put the cards back and carried on cruising, after all every pack of cards one finds at charity shops is quite run of the mill, and I wasn’t about to waste £4 on another standard pack.

Returning home the pack of cards I had seen played on my mind, and checking my records I found I didn’t have them catalogued, so I checked WoPC. To my dismay there was no mention of this pack, and after a short argument with myself I reluctantly decided to return next week and if they were still available I should buy them. 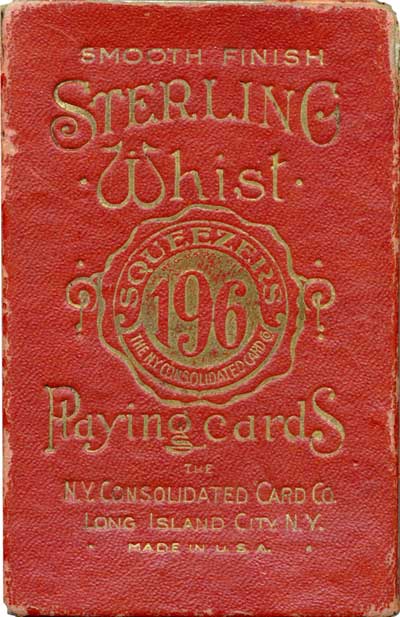 The box claimed the cards to be Sterling Whist Squeezers 196 by the NY Consolidated Card Co.

The next Saturday upon returning to the charity shop I bought the pack and took it home for cataloguing.

When researching a pack of cards I don’t have catalogued I first check WoPC, and then widen my search to the whole world wide web. A cursory search returned no results. This is unusual. Normally I should encounter a few entries from eBay of similar packs being sold. A subsequent more in depth search returned a single source, a less than reliable online catalogue of playing cards which had this pack listed and dated them to either the 1920s or 1930s, while the ever-reliable "Hochman's Encyclopaedia of American Playing Cards", the de facto authority on American playing cards, described the brand of Sterling Whist as being circa 1920.

While I am reluctant to doubt Hochman’s, with experience comes an instinct for dating playing cards, and my instincts told me these cards were earlier than that so I decided to do my own serious analysis.

Above: remains of tax stamp affixed to the box.

The box carried a fragment of an American tax stamp. Playing cards used to be subject to excise duty in many countries. Excise duty varied over time. In the USA the excise duty was introduced in 1894 at 2 cents and raised to 7 cents in 1917, with existing tax stamps being over printed with the new duty. Although I only had the bottom section of the tax stamp, I could determine that the duty paid was 2 cents, and the tax stamp had not been over printed with the new tax, only with the manufacturer’s cancellation stamp. The design of the tax stamp was also one which was replaced in 1918. Clearly then this pack of cards was manufactured and sold after 1894 and prior to 1917.

The New York Consolidated Card Company was at this time owned by the US Playing Card Company, who, in 1904 started stamping the ace of spades in all their packs of cards with a date code comprising a letter and four digits. The ace of spades in this pack of cards did not carry a date code, strongly suggesting that they were manufactured prior to the introduction of date coding in 1904. See the Ace of Spades► 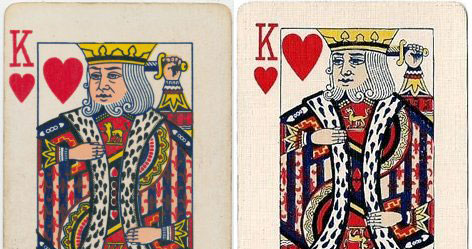 Above: the court cards are similar to, but slightly more ornate than those used in another brand by the same company, “Hart’s French Whist” produced around 1905.

Manufacturers frequently change the design of key cards over the years, particularly the design of the court cards and the ace of spades. Inspection of these cards and comparison with other known packs can often supply suggestions as to date. The court cards in this pack are similar to, but slightly more ornate than the court cards used in another brand by the same company, “Hart’s French Whist” produced around 1905. The faces and hands of the court cards were lithographed in natural looking flesh tone. In contrast, the later 1920s Sterling Whist packs appear to have unnatural yellow skin, and it is common for manufacturers to dull down their courts over the years. The presence of natural skin tones is a strong indicator of an earlier pack.

I concluded, that this pack of cards, Sterling Whist by the NY Consolidated Card Co, was manufactured and sold in the USA in 1904 or perhaps a few years earlier, and as such was an early edition of a brand which became more prominent during the 1920s. 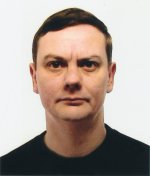 I have adored playing cards since before I was seven years old, and was brought up on packs of Waddington's No 1. As a child I was fascinated by the pictures of the court cards.

Over the next fifty years I was seduced by the artwork in Piatnik's packs and became a collector of playing cards.

I describe my self as a playing card archaeologist, using detective work to identify and date obscure packs of cards discovered in old houses, flea markets and car boot sales. A wide size version of De Luxe No.142 had been published in c.1920, with a similar Ace of Spades and Joker, but which was never very popular. There have been at least three different versions of the Triton deck, with different Jokers, different styles of court cards and slight differences in the lettering on the Ace of Spades and/or Joker. The cards were advertised as “double enameled”. Lewis I. Cohen made his first deck of cards in 1832. In 1835 Mr Cohen invented a new machine to print four colours on a sheet at once, which was to revolutionise the entire playing card industry. The New York Consolidated Card Company was formed in 1871 by the merging of Lawrence & Cohen, Samuel Hart & Co and John J. Levy. By 1877 the New York Consolidated Card Co's "Squeezers" were a great success on account of the indices in the corners which enabled the cards to be fanned.