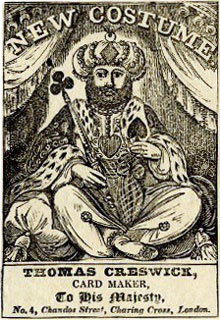 Thomas Creswick was a paper-maker and wholesale stationer who first entered the card business in 1812. Standard woodblock & stencil playing cards were produced from c.1820 onwards, following the traditional designs, including smaller-sized piquet packs and a special non-standard pack featuring historical kings and queens of various nations in c.1830 (shown below). Advertisements of the day mentioned that Creswick took great pains to make cards which slip easily in the hand whilst also introducing improvements in the manufacturing process. Duty Aces of Spades were registered from c.1820, and an exportation Ace of Spades in 1828.

Creswick was appointed as manufacturer of paper and cards to William IV in 1831 and he advertised as such in 1834. Thomas Creswick died at 12 Clarendon Place, Maida Vale in September 1840, age 66, described as cardmaker and stationer of Chandos St (Gentleman's Magazine, 1840, vol.168, p.553). 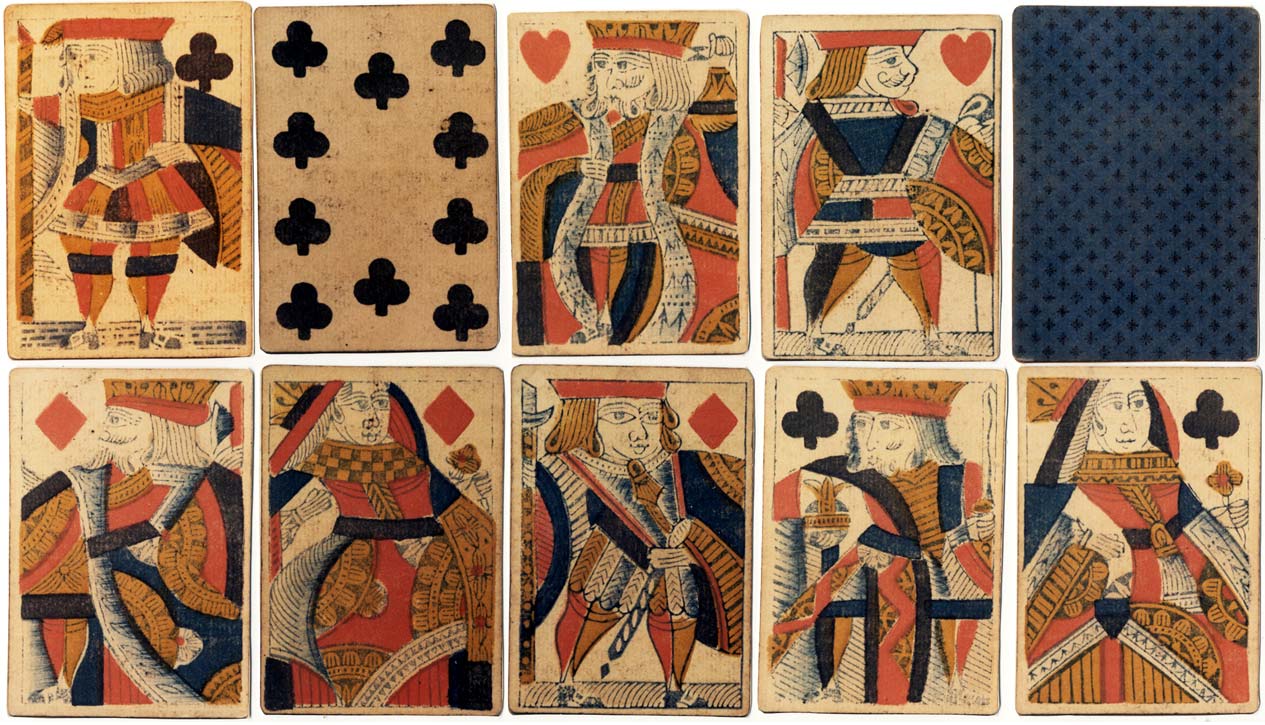 Above: standard pack of English playing cards with 'Garter' Ace of Spades manufactured by Thomas Creswick, c.1825. The court cards in this example are of the type used by Josiah Stone. There seems to have been some kind of take-over c.1825, as there is reference in the taxation records to Creswick's taking over a number of Stone Garter ASs. More usually Creswick uses Type IV court cards (shown below).

King of Clubs. Pope wrote “That long behind he trails his pompous robes. And, of all the monarchs only grasps the globe”. The title “King of Clubs” was bestowed by Johnson on the Literary Club.

In his advertising sheet dating to about 1832, Creswick informed his customers that he had removed his ‘Warehouse and Manufactory’ to larger and more commodious premises at 4 Chandos St, ‘where he has now room enough for the sale of Paper of every variety, as well as the goods of his own Production’. As well as writing paper and playing cards, he offered various of his own papers, including ‘prepared smooth and rough surface’ white drawing papers, ‘tinted and coloured Drawing Papers, Originally invented by him with prepared Surface…’

Below: pack produced by Thomas Creswick in c.1830 with 'Old Frizzle' Ace of Spades depicting historical Kings and Queens of various nations. The Kings and Queens are unnamed but are evidently meant to represent actual people. The King of Clubs is Henry VIII.