The Hardy family of playing card manufacturers began with Henry Hardy (1784-89) and continued through to Hardy & Sons who finally closed down in c.1840.

Above: Standard single-ended English pattern deck with 'Garter' Ace of Spades made by I. Hardy, c.1817. The Ace has "Addl. Duty Sixpence" inscribed three times. The cards show the typical deterioration of the quality of design in English cards at the end of the 18th and early part of the 19th century. The designs tend to take up more space on the cards, losing their profiles, and the figures become more stylised or grotesque.

Above: Hardy exportation playing cards with George III Garter duty ace, c.1818. These cards were made for exportation to the colonies, USA, Europe or the Far East, and thus bear no duty. Image courtesy John Sings. 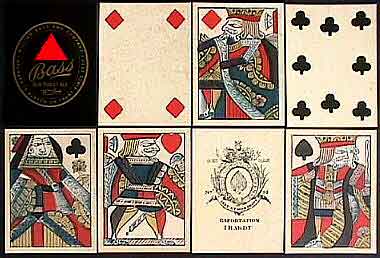 Above: Standard single-ended English pattern deck with 'Exportation' Ace of Spades made by I. Hardy, c.1820. It is not known precisely which country (-ies) these packs were destined for, but quite likely U.S.A. was one destination.

Right: modern facsimile edition of above deck promoting Bass beer, c.1977. There has been more than one facsimile or replica edition of the Hardy 'Exportation' deck. One facsimile edition was produced in c.1982 for the Williamsburg Museum, in Virginia, USA, which included a facsimile of the wrapper. In another edition from the 1990s the original tax wrapper is also reproduced and this has been known to mislead the novice collector into believing it to be a genuine original. From time to time these copies have been seen for sale on eBay  see more► 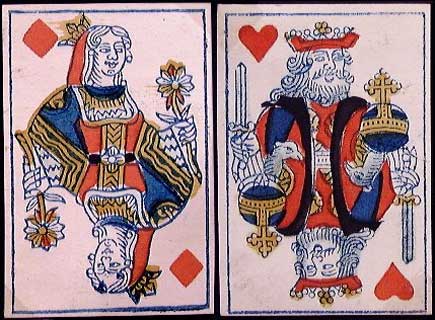 Above: interesting double-ended French-style deck with 'Old Frizzle' Ace of Spades manufactured by Hardy & Sons, c.1840. The court cards have the inscription "Dumoutiers a Nantes" so they may have been foreign cards sold in the UK by Hardy & Sons under their own name.