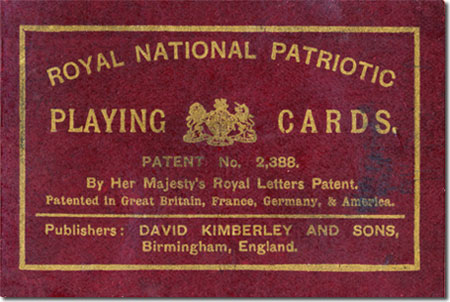 Above: detail from one of the two-part sliding boxes. David Kimberley & Sons, who published the cards, were not previously printers or publishers but manufacturers of carpenters' saws and planes in Birmingham at that time.

“They differ from ordinary cards in having combined with each suit a special distinct nationality of style and appearance. Instead of the ordinary Ace card, I make an Ace which exhibits an illustration of the representative flag of that suit's nationality. Instead of the normal King, Queen and Knave I propose to place a good portrait of the rulers or representatives of the countries indicated...”

Kimberley’s “National Patriotic” playing cards represent four nations: Diamonds represent England, Hearts represent America, Spades represent France and Clubs represent Germany. The Ace card of each suit represents the ‘Royal Standard’ or flag of each Nation. For England (Diamonds) the Union Jack; for America (Hearts) the Stars and Stripes; for France (Spades) the National Colours and for Germany (Clubs) their Royal Standard. Courts represent contemporary and past royalty. The backs usually show an array of clocks in various colours.

The numerals follow a scheme proposed by Kimberley in his patent application of 1892: a large suit-sign occupies the centre of the card, with the numeric value voided in it twice. The pack has non-standard aces, non-standard courts, non-standard colours for pips (spades are blue, hearts maroon) and the pips on the numeral cards occupy almost the entire card.

Above: numeral cards from Kimberley's Royal National Patriotic playing cards, first edition c.1892-3. This is the only version with giant suit marks on cards 2 to 10; subsequent editions had conventional suit marks   see more →

The cards bear no advertising, nor is there any indication that the cards were intended for commemorative purposes. The fact that they ran into at least five distinct editions suggests they were popular during their ten or twelve years of production, i.e. c.1892-c.1905.

The court cards and Aces are the same in the first and second editions. Only the numeral cards differ. 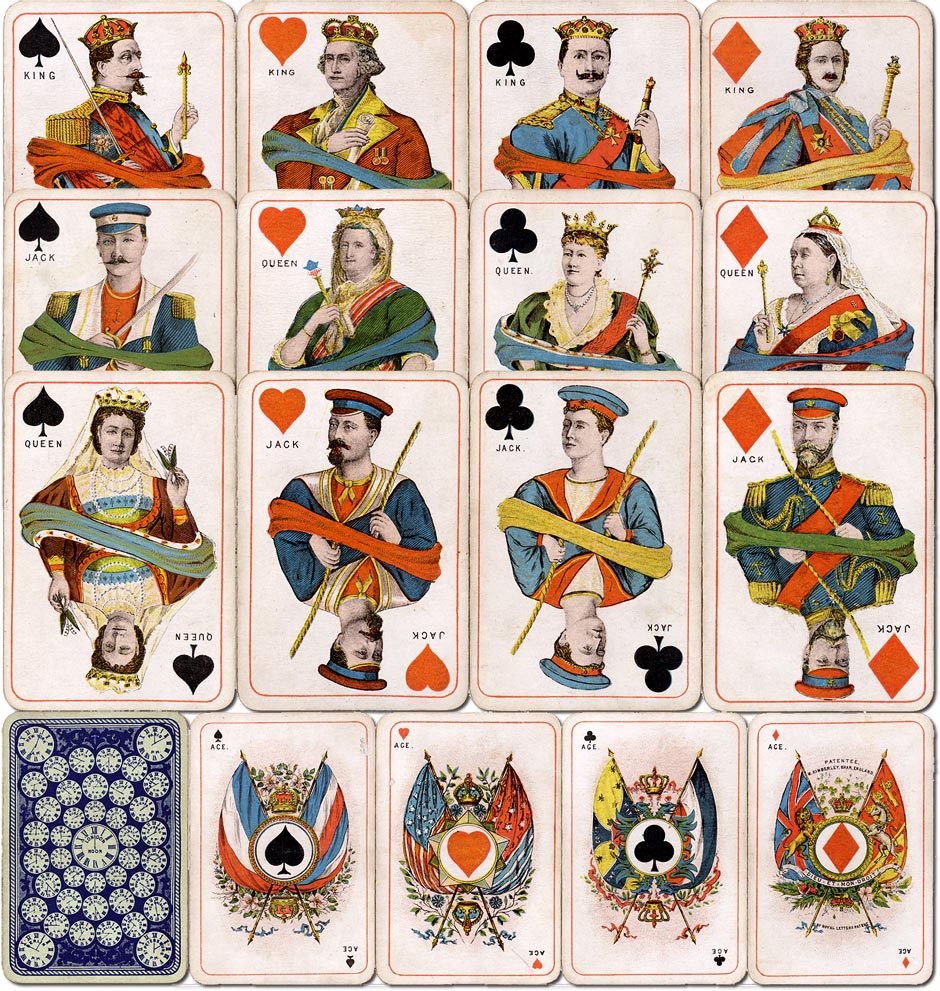 Above: Kimberley's Royal National Patriotic playing cards from the fourth edition published c.1899-1901. The Jack of Hearts is a typical representative from the U.S. Navy of the time. The King of Clubs shows Kaiser Wilhelm II. Unlike the first edition which was printed in luxurious colour lithography including gold, the designs here are rendered by means of fine outlines, stipple printed in black, with areas of mainly flat colour. The back design in this edition features a clock design ~ click image to zoom ~ and the set has an additional red descriptive card.

Above: Kimberley's Royal National Patriotic playing cards from the fifth edition published during c.1902-5 with conventional corner indices. This edition also contained a Joker depicting a lady holding a card. The differences between the different editions in quality and method of printing suggest different printers were involved.   See more →

All images on this page from the collection of Barney Townshend.