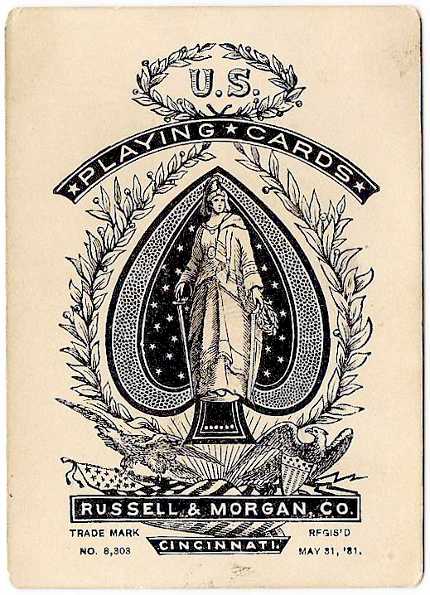 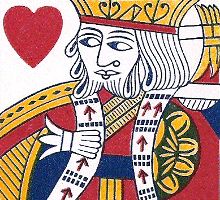 Squared Faro #366 was first produced by Russell & Morgan Co. in 1887 to supply gambling casinos. The cards have square corners and are one of two known USPC decks made without indices. The court cards are full-length figures which contain many of the idiosyncratic features associated with designs re-copied from the woodblock era. The numeral cards are double-ended. The brand was still sold until 1900. The Russell & Morgan Co. Ace of Spades was used throughout the entire life of the brand. 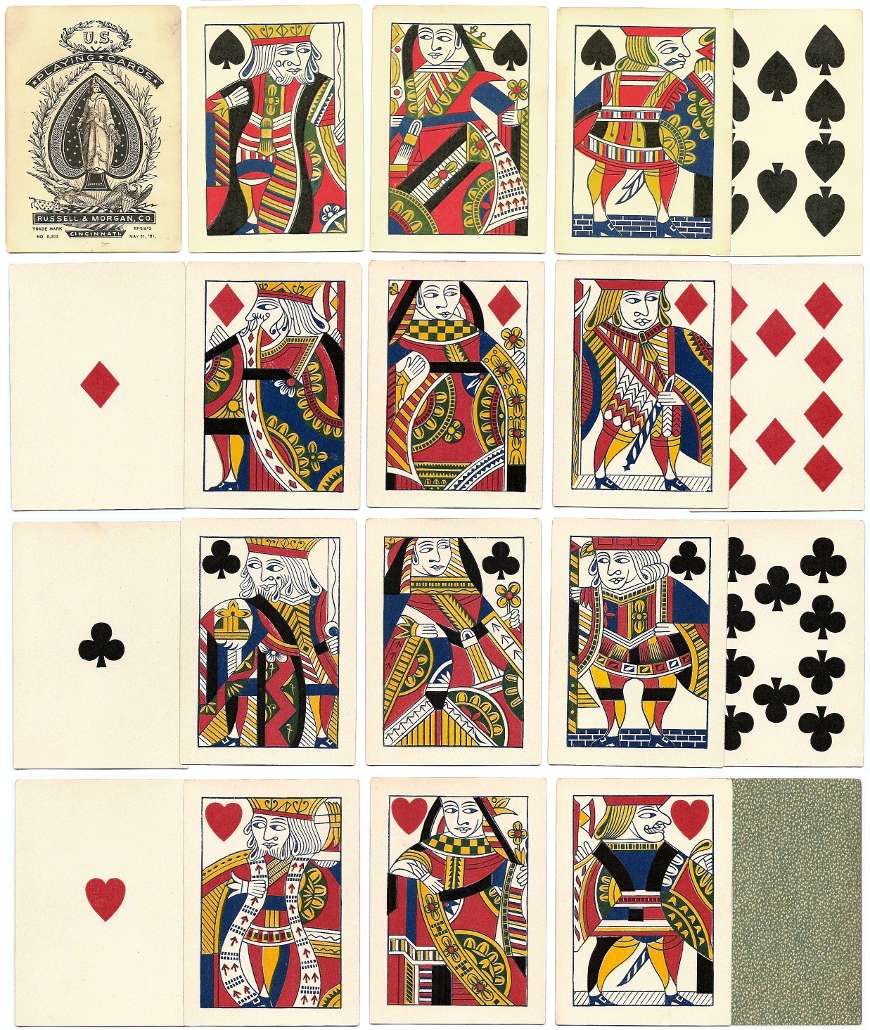 Above: Squared Faro #366 playing cards published by Russell & Morgan Co. c.1887. The court cards are full-length, but the numeral cards are double-ended. There is enough margin around the court cards to allow for trimming several times during the cards' lifetime. Images by kind permission of Mike Jacobs.

From the beginning the company used the most modern equipment. A card-punching machine enabled cards to be punched quickly and accurately from the printed sheets, which gave greater precision than the manual method of cutting and trimming cards used prior to that time. 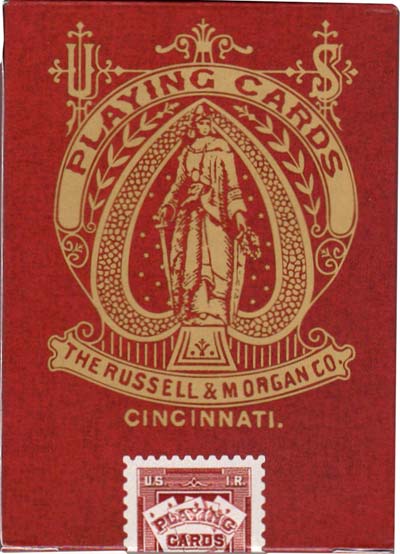 Reviewed by Matt Probert   ::   Produced by Will Roya for PlayingCardDecks.com►

Faro Vintage Playing Cards are a reproduction custom pack aimed at collectors and magicians, based on the "Squared Faro #366" by Russell & Morgan Co. produced from 1887 to 1900 to supply gambling casinos across the USA, where the gambling card game 'Faro' was very popular at the time.

Like the 19th century originals, the reproduction pack is cut to poker width, without corner indices and features full-length one way court images based upon earlier wood block designs. In addition, the reproduction packs include two jokers (based on Russell & Morgan Co Bicycle brand jokers) and two gaff cards: a simple ace of spades and a double-back card to further expand the scope for use by card magicians. 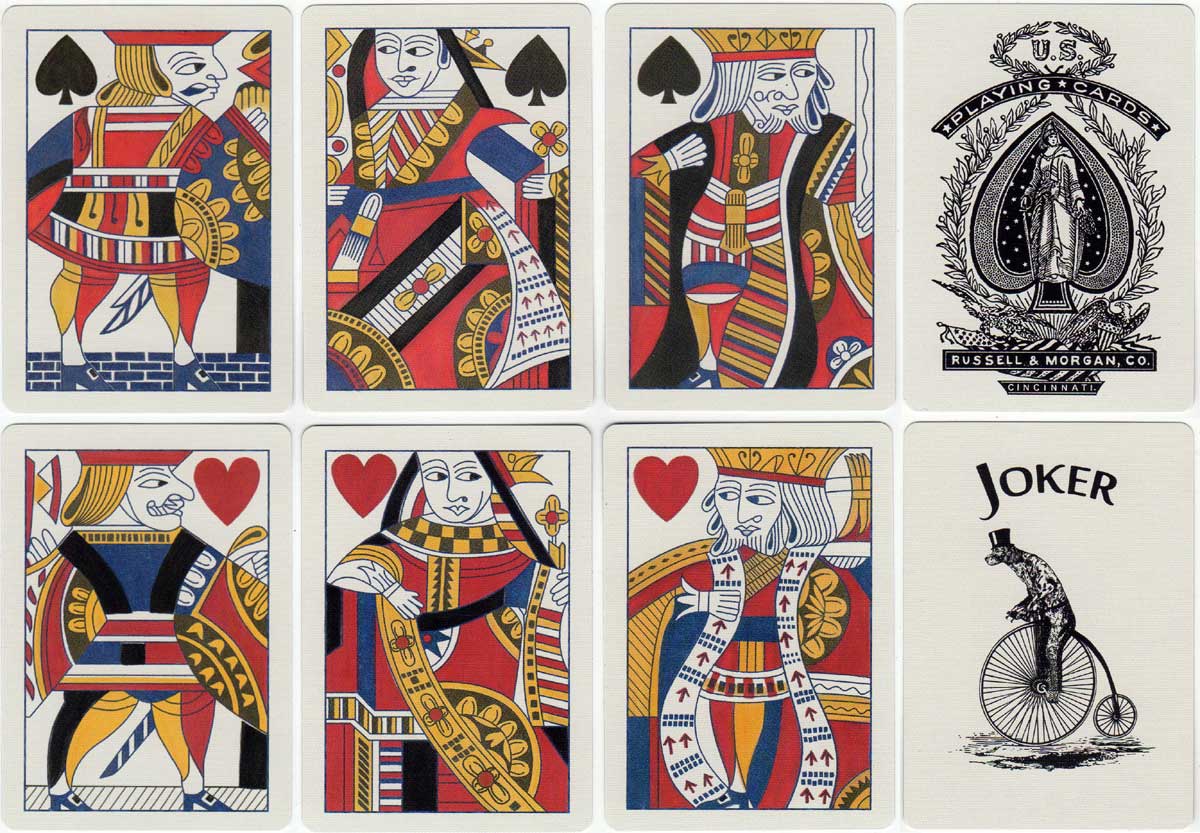 Above: Faro Vintage Playing Cards produced by card magician Will Roya, illustrated by Azured Ox, manufactured by USPCC in 2019 in two colours: red and blue (strangely not the original green, which I should like to see) in a limited edition of 2000 packs of each colour. Packs are sold either as a pair comprising one pack of each colour; individually or as an uncut sheet.

Each pack is supplied in a colour coordinated box - either red or blue, corresponding to the colour of the backs of the cards inside, and printed with gold ink and sealed with an imitation tax stamp (of a design used between 1894 and 1896) and wrapped in cellophane.

To prevent the cards being passed off as "originals" the ace of spades in the reproduction pack differs slightly from the original - the printed design is slightly larger and lacks the trademark registration details of the original. The border around the cards has also been slightly reduced, and the cards have been cut with rounded corners, rather than the square corners of the orignals. These minor alterations in no way detract from their use in theatre, but should prevent them being sold by the unscrupulous as rare 19th century originals.

Above: decks include two-way pip cards, an extra simple ace of spades and a double-back card to expand the scope for card magicians.

The cards are produced on Bicycle playing card paper, in poker width, with the same embossing and finish to provide the same finish that is preferred by card magicians, one of the key target audiences for this pack. As a magic theatre prop these cards excel. Any card magician wishing to perform a "Wild West" themed routine will find these a real asset in adding a touch of realism and theatre to the act, while for collectors the pack offers an opportunity to own the art work without having to pay the earth trying to source an extremely rare original.