HELLO! In May 2012 I thought it was time to start a blog for all those interested in playing cards. Personally, I'm tired of all the inaccurate information on the Internet about cards (and most other things, too), so here's an opportunity to put some bits right. And who the hell am I to think I can do any better?

Well, I'm Ken Lodge and have been collecting playing cards since I was about eighteen months old (1945). I am also a trained academic, so I can observe and analyze reasonably well. I've applied these analytical techniques over a long period of time to the study of playing cards and have managed to assemble a large amount of information about them, especially those of the standard English pattern. But the approach to studying playing cards that I take can be applied to any kind of cards, including card games. Since a large amount of the information I have about playing cards and their history is in my head, I thought it was about time I gave some of it a public airing, hopefully for the benefit of others.

If you wish to contact me, please use my home e-mail address: mailto:k.lodge111@btinternet.com

Unfortunately, all printing costs have gone up and so I've had to increase the cost of the two books that are available on demand.

I have attempted to bring together a lot of widely dispersed material into one place in order to present a comprehensive survey of the history of the British playing card industry from 1600 up until 2000. The main sources of the material are my own books and publications (including this blog), those of Mike Goodall, the work of John Berry on the Waddington archive and assorted information from various collectors who have been kind enough to give it to me. The book will be in the same format as my other recent books, including the one with Paul Bostock, A4 with colour illustrations, and with perfect binding. It consists of 284 + vi pages and I give a few sample illustrations and pages below, along with the contents page. I have made a few corrections and updates for the new second printing. The price is £85 + postage* and is available to order now. Please send any requests for further information to my e-mail address: k.lodge111@btinternet.com 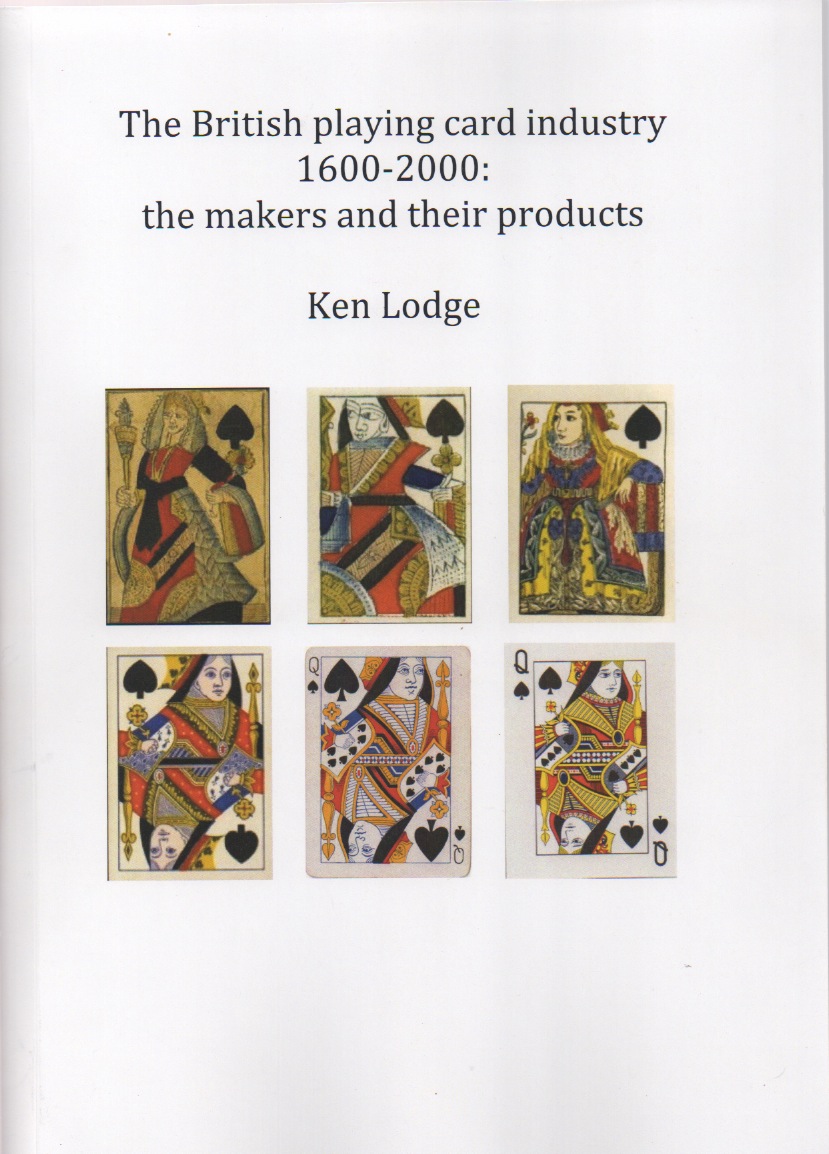 THE BRITISH PLAYING CARD INDUSTRY 1600-2000: The Makers and Their Products 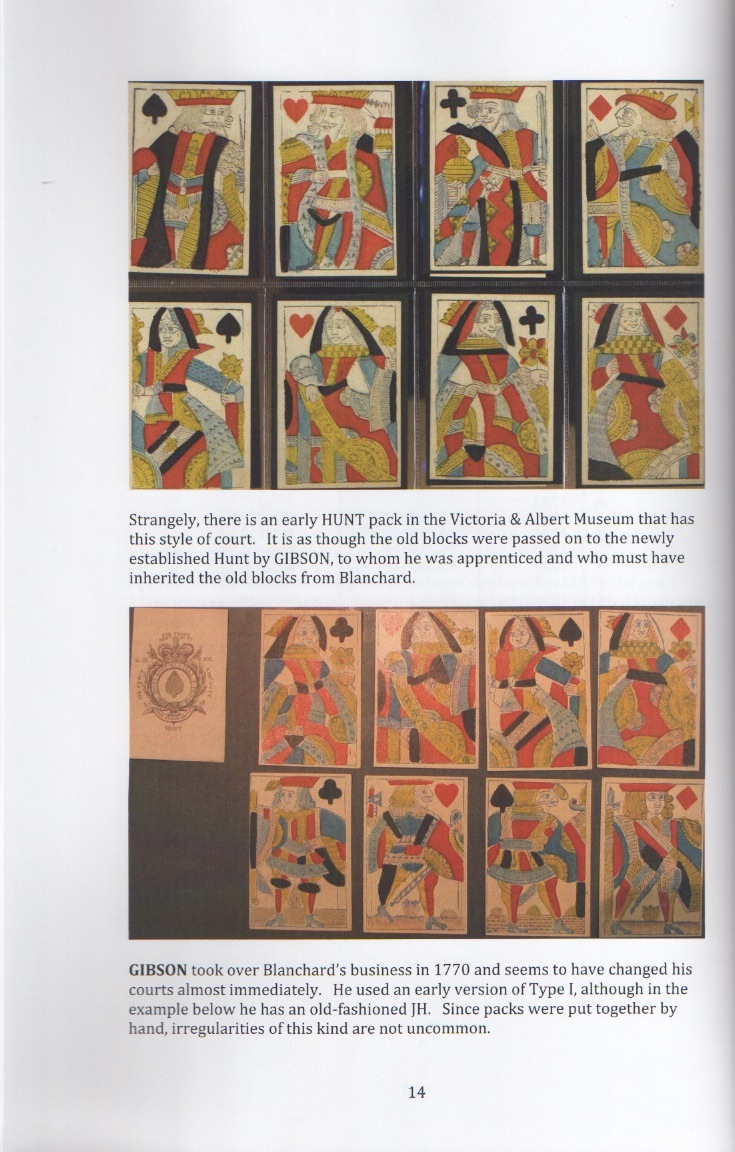 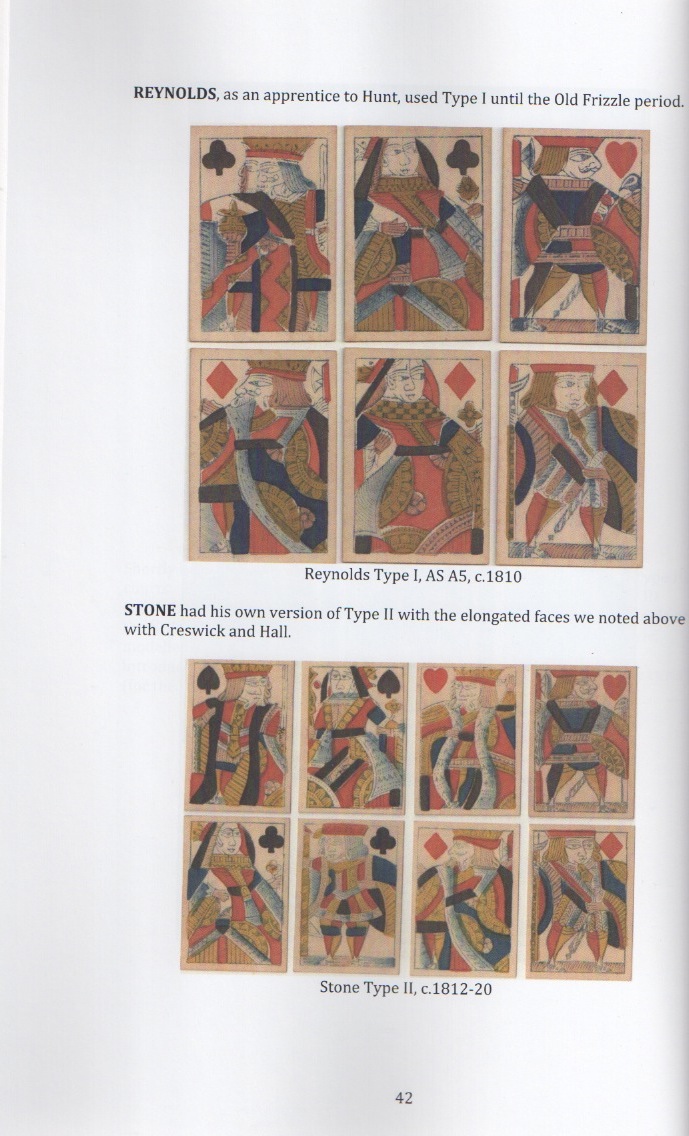 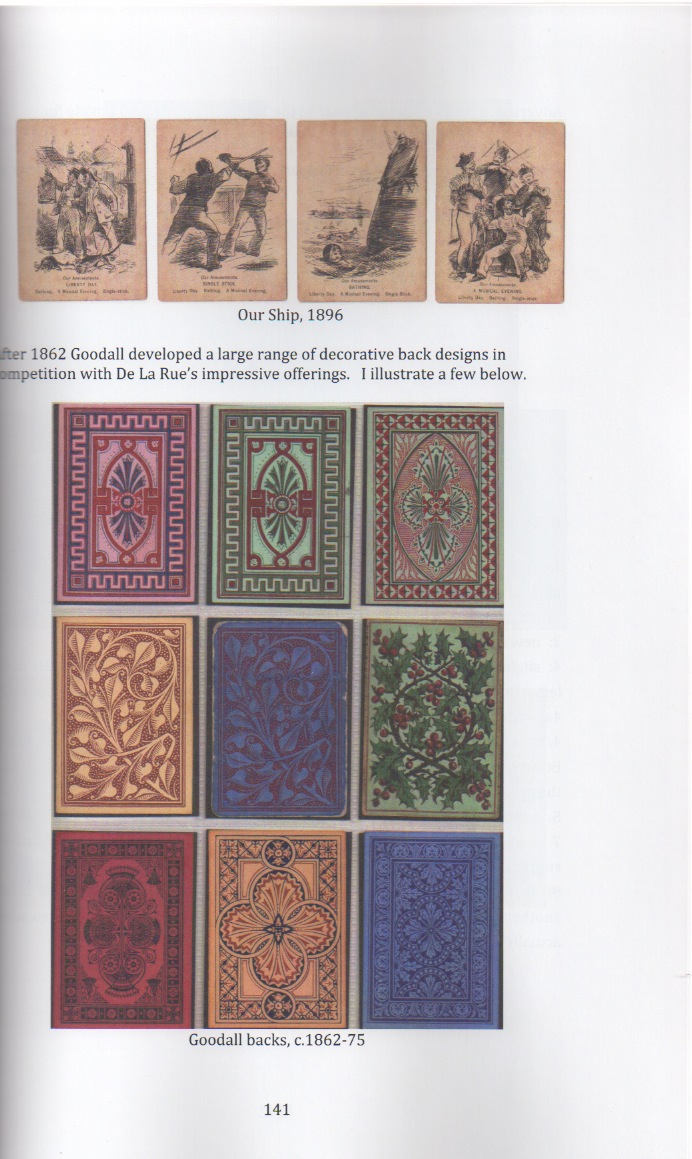 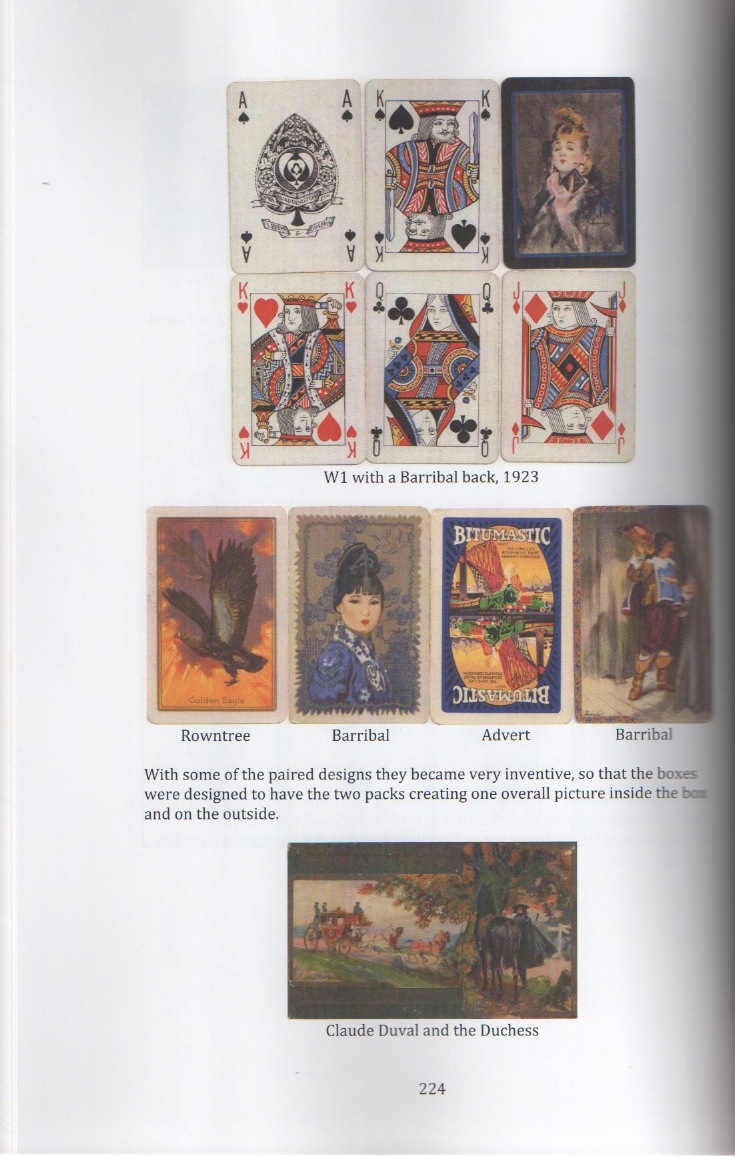 It is a comprehensive survey of English card-makers from 1761-1905 with a focus on the wood-block period. The contents are as follows:


Chapter One: Introduction - general discussion of the issues, the sources and the approach.


Chapter Two: The makers - a list of all the makers we know of, their addresses and dates, plus the timeline version, including a section on difficult cases such as importers and obscure firms listed under card-makers.

Chapter Four: The block analysis - introduction to the method and discussion of the findings.

Chapter Five: The stencil analysis - introduction to the method and discussion of the findings.

Bits of the information used in putting the book together have been posted on this blog. The block analysis and the stencil analysis cover the period 1790-1830; the former is the presentation of distinctive features of the outlines of each court figure, and the latter is a presentation of the colour distribution by stencil. The aim is to show how each maker had a slightly different product, even though the differences might be very slight in some cases.

The book contains 121 pages plus title page (illustrated below), is perfect bound with a flexible cover, and costs £40 + postage. If you would like a copy, please contact me in the first instance at k.lodge111@btinternet.com. Please specify which rate of postage you would prefer. 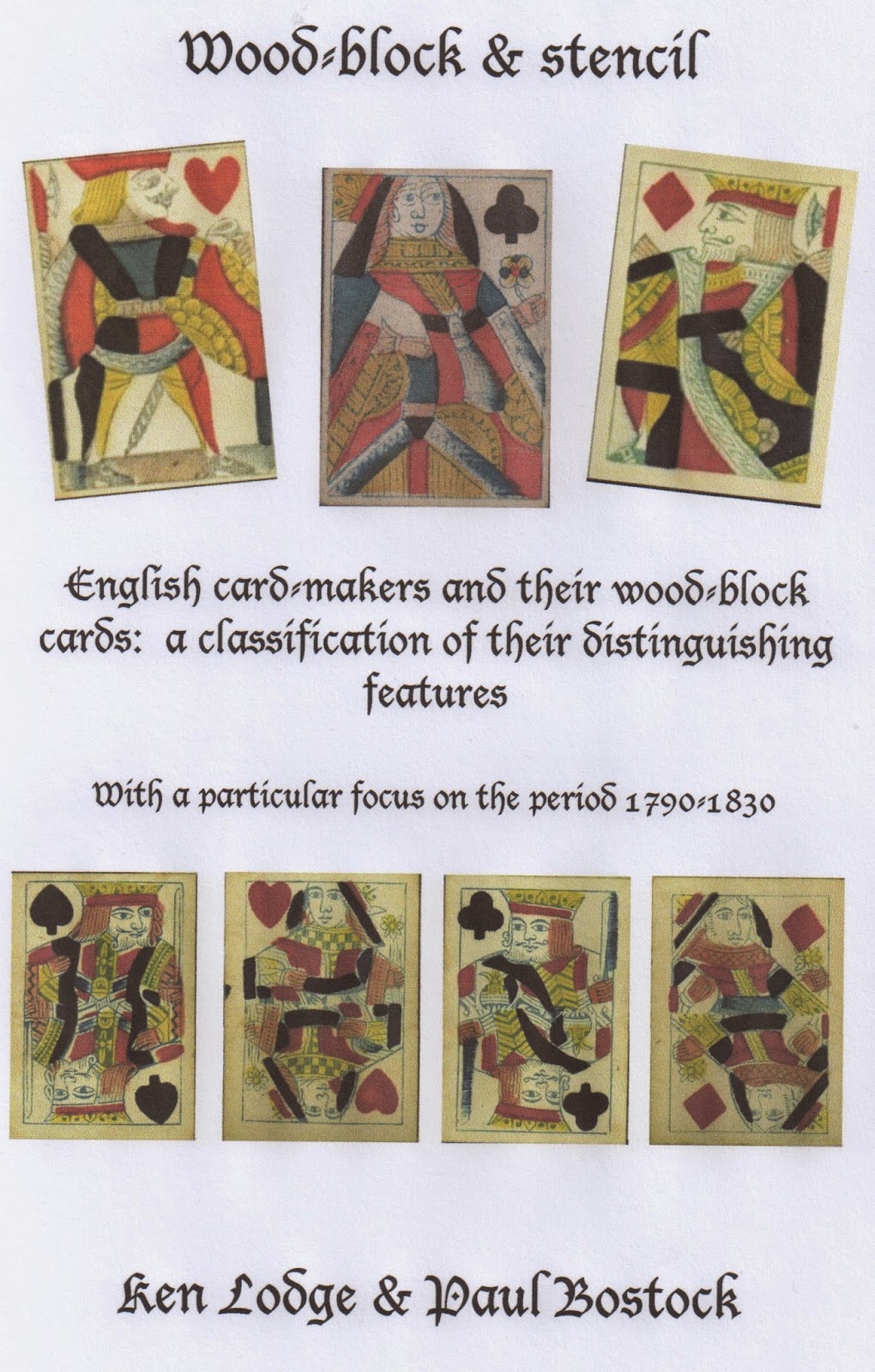 *** The standard English pattern (2nd edition, 2010) is now available again to order. Corrected and enlarged, there are now 375 pages in full colour. The price is £88 + postage. 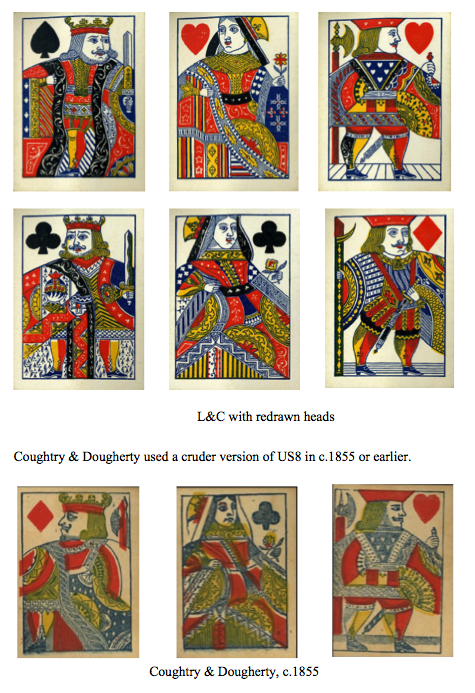 The contents are as follows:
Preface page
Introduction page
Part One: the British Isles
Chapter One: Early Makers
Chapter Two: Redrawn designs: English makers to the present
Chapter Three: Addresses of some English makers (to 1939)
Part Two: the rest of the world
Chapter Four: Designs related to those of English makers
Chapter Five: American designs
Chapter Six: Belgium
Chapter Seven: China, Hong Kong and Taiwan
Chapter Eight: Other designs from the rest of the world
Appendix One: The number cards and mixed packs
Appendix Two: The development of Type II courts by Hall
References
Index

If anyone has any queries about cards, I'll do my best to answer them. But if I don't know the answer, I'll say so, and if I'm guessing, I'll say so.