TDC Inc. was a major maker of playing-cards in the United States of America from c.1960-1979. The origins of the company are complex but originated from two concerns: the Heines Publishing Company and The Trend Development Corporation.

John C. Heines was born on the 5th June 1916 in Holland, Michigan. He founded Heines Publishing Company in c.1932 registered in Minneapolis, Minnesota. This would have been a somewhat precocious enterprise for Heines who would only have been in his late teens and until his business was established, he worked as a sales associate with the Flour City Paper Box Co. of Minneapolis, essentially a paper-ware printing and manufacturing company. He was to become President and Treasurer of Heines Publishing Company, which specialised in publishing short soft-back books on Bridge taking full advantage of the enormous popularity of the game in the mid to late 20th century. Most notable of these booklets were those written by Charles Goren. Other games covered by booklets included pinochle, poker and canasta.

Booklets were produced at a plant in Amery Wisconsin but the playing-card decks were either made by Arrco of Chicago or United States Playing Card Company of Cincinnati, published and marketed by Heines under the ‘Crown’ and ‘Royale’ brand names. They were often sold as double packs suitable for playing Bridge.

Heines House had distinctive trademarks of a happy king carrying scissors trailing a string with suit signs attached. In an alternative version, the king is carrying a wand. The court cards and joker used the standard designs of the maker. Other cards retailed by Heines included the ‘NOR’ range of all plastic cards made by the Northbrook Plastic Card Company of Illinois. Innovations such as this were seldom successful due in part to the conservative nature of card players and perhaps the fact that they were four times the price of a standard pack made from card. John C. Heines died aged 91 in 2008. 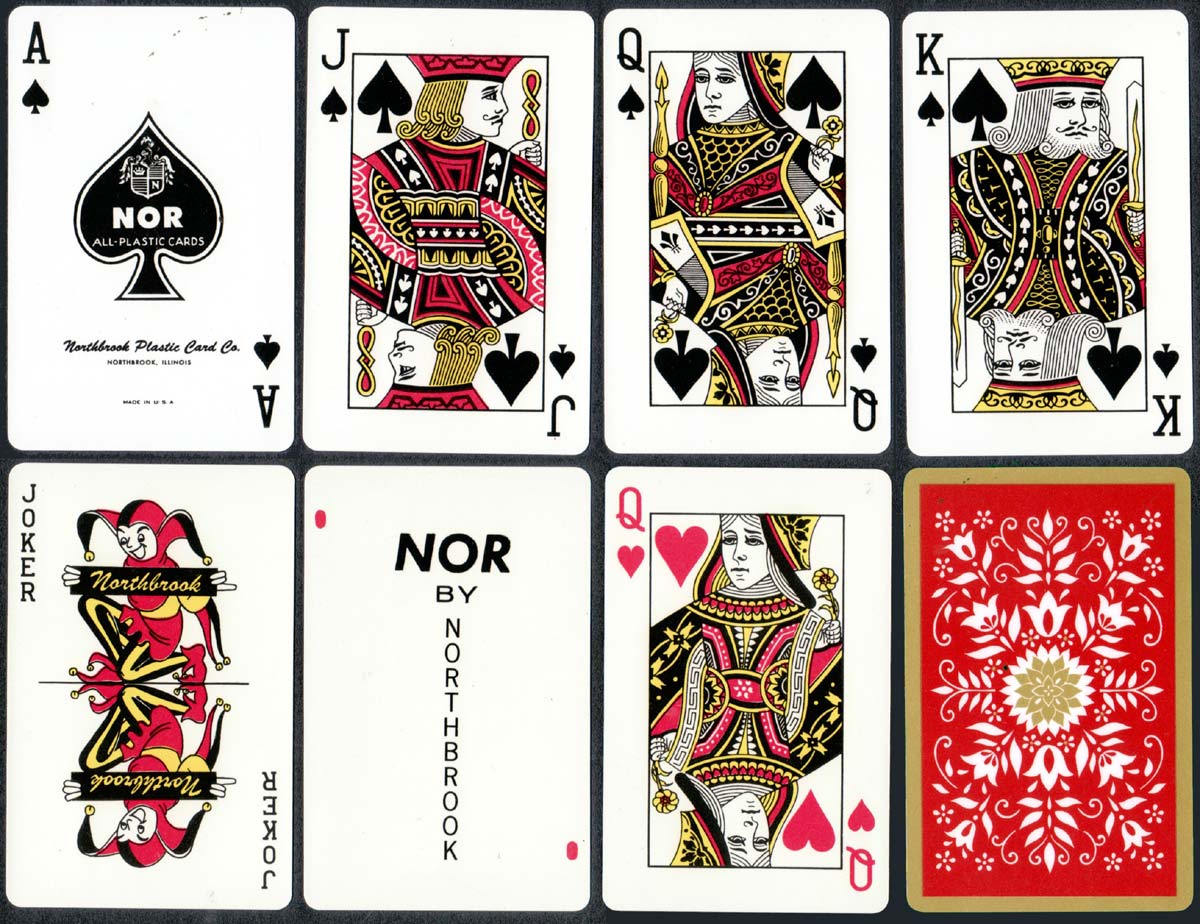 Above: ‘NOR’ all plastic cards retailed by Heines made by the Northbrook Plastic Card Company of Illinois.

Bridge players will be familiar with the work of Charles Henry Goren who improved on the point count system devised by Milton Work by developing the high card point count system noted for its simplicity and accuracy and which remains the foundation of modern bidding systems. Goren was born in 1901 and originally trained as a lawyer. In 1936, he gave up his legal career to pursue his passion for Bridge. Amongst his many talents, Goren was a writer and published his first book on Bridge, ‘Winning Bridge Made Easy’ in 1936. In the world of Bridge, Goren was a superstar! He wrote newspaper columns, he had his own Bridge TV show, and won many Bridge championship tournaments. So famous was he that he was known as ‘Mr. Bridge’. Goren realized the popularity of the game of Bridge offered commercial opportunities and could cash in on his fame. He founded Charles H Goren Enterprises Inc. and the Trend Development Corporation in the 1950s to publish and market some of his booklets on Bridge and accessories such as the ‘Bidding Wheel’, a device to improve responses to various bids based on his point count system. He retired from competitive play in 1966 but continued his writing career and his involvement in playing card accessories. Goren gave his name to several kit style games such as ‘Automatic Bridge’ and ‘Bridge for Two’ that included, along with the necessary apparatus, card shufflers and instruction books and, of course, packs of cards that were made by United States Playing Card Company.

Above: pages from Heines House 1967 Brochure. 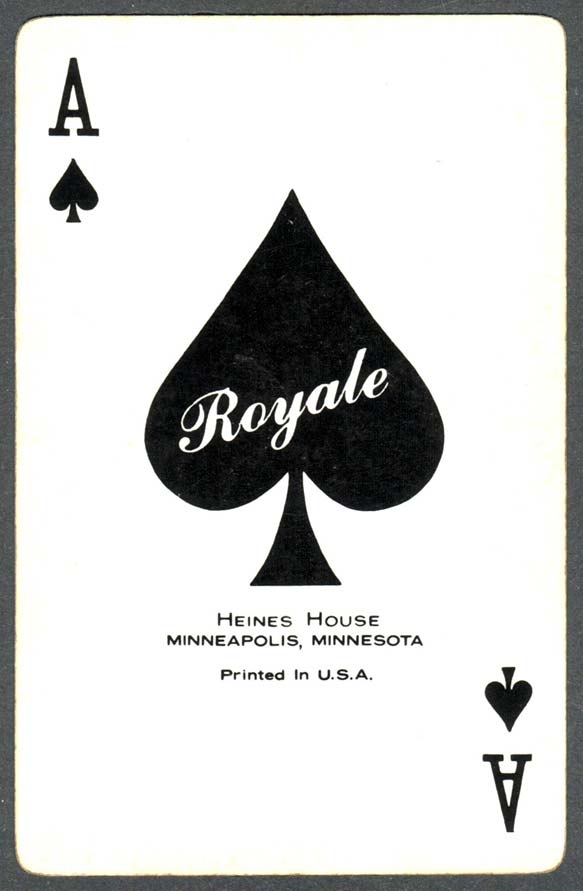 Above: Heines House ace of spades from a ROYALE pack made by USPCC c.1970. 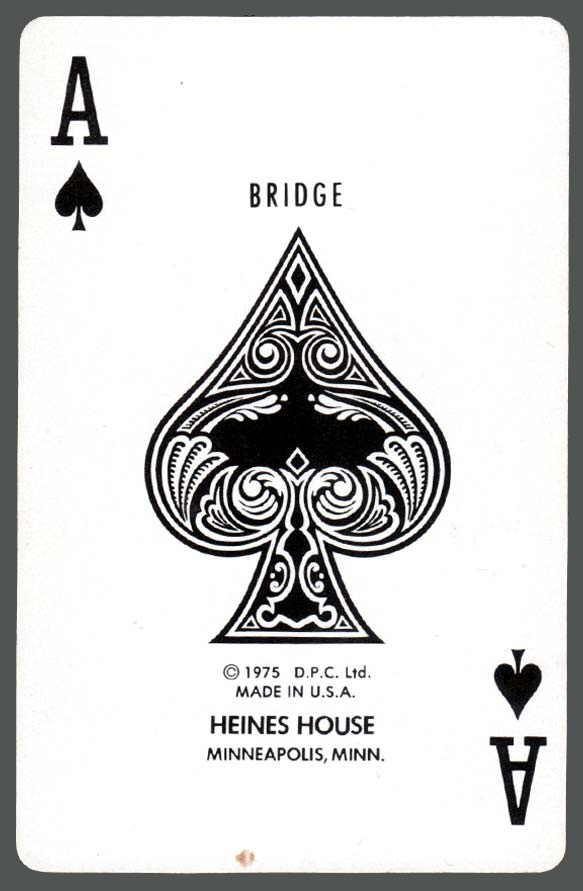 Above: Heines House Ace of Spades with DPC attribution 1975. 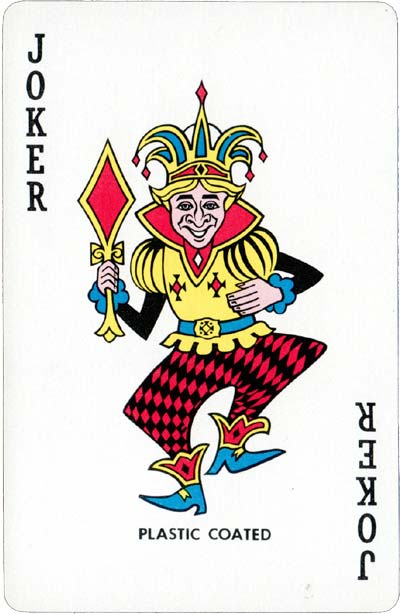 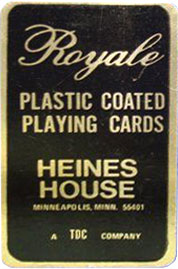 At some point in the 1960s, Heines House and Charles H Goren’s Trend Development Corporation merged their publishing interests. Heines House became a component division of the new TDC Inc., with a new castle silhouette logo. The new business brought together the publishing interests of Heines Publishing Company and TDC’s Goren range of playing-card accessories gambling chips, cribbage boards and the Goren Bridge playing cards. It is not known exactly when the merger took place but production of ‘Royale’ playing-cards continued as a Heines brand of the TDC Inc., although card production was still contracted out to USPCC, the ace of spades was customized to the ‘Royale’ brand and gives Heines House as publisher while the box states that Heines House is a TDC company. The use of MINN as an abbreviation for Minnesota provides some circumstantial evidence that the merger took place before 1963 when the US Postal Service introduced two letter abbreviations for American States but this is by no means definitive. The Head Office was in Minneapolis and orders for all of Goren/Heines products were received there and sent to Amery, WI, where production took place. The Heines ‘happy king with a wand’ logo was incorporated into a new TDC-Heines logo. In 1975, many of Goren’s books were reprinted under the TDCHeines imprint at Amery.

TDC playing-card production took place in the Fabri-Tek building in Amery. Neither Heines nor Goren had any direct knowledge of playing-card manufacture and Mr. Dave Roberts was brought in to organize the furnishing of the plant with printing presses, plastic coaters, slotting presses, die cutters and cello-wrap machines for producing decks of cards. Once in place, card decks were printed under the imprint of The Diamond Playing Card Company (DPC) and early cards produced by TDC-Heines credit this company on the ace of spades and on packaging. This ceased after a while and decks were then issued as by TDC Inc. This may well have taken place in 1975 because the TDC ace of spades is copyrighted for that year. Notable amongst the playing-cards were the series of Bridge decks marketed as ‘Official Charles H Goren’ cards.

When TDC playing-card production began, Dennis McAnally was recruited to lead the retail playing card trade and Gene Cesario to create the new advertising trade. TDC tried to go head-to-head into the retail trade directly up against USPCC and Stancraft/Brown & Bigelow but even with the Goren name, retail efforts failed to gain hold and retail playing-cards were eventually dropped.

The standard cards made by TDC have AngloAmerican court card designs characterized by the use of a bright blue in the robes. The ace of spades is relatively simple but distinguished by being copyrighted for 1975. The joker shows a rather fey prancing jester with similar coloration as the courts and is either anonymous or gives TDC as maker. Monochrome examples are also known and were in non-standard packs such as the Spokesman series of language tuition cards. Large index decks were also produced in which the designs were the same but smaller.

Above: standard courts by TDC Inc. with a bright blue in the robes. 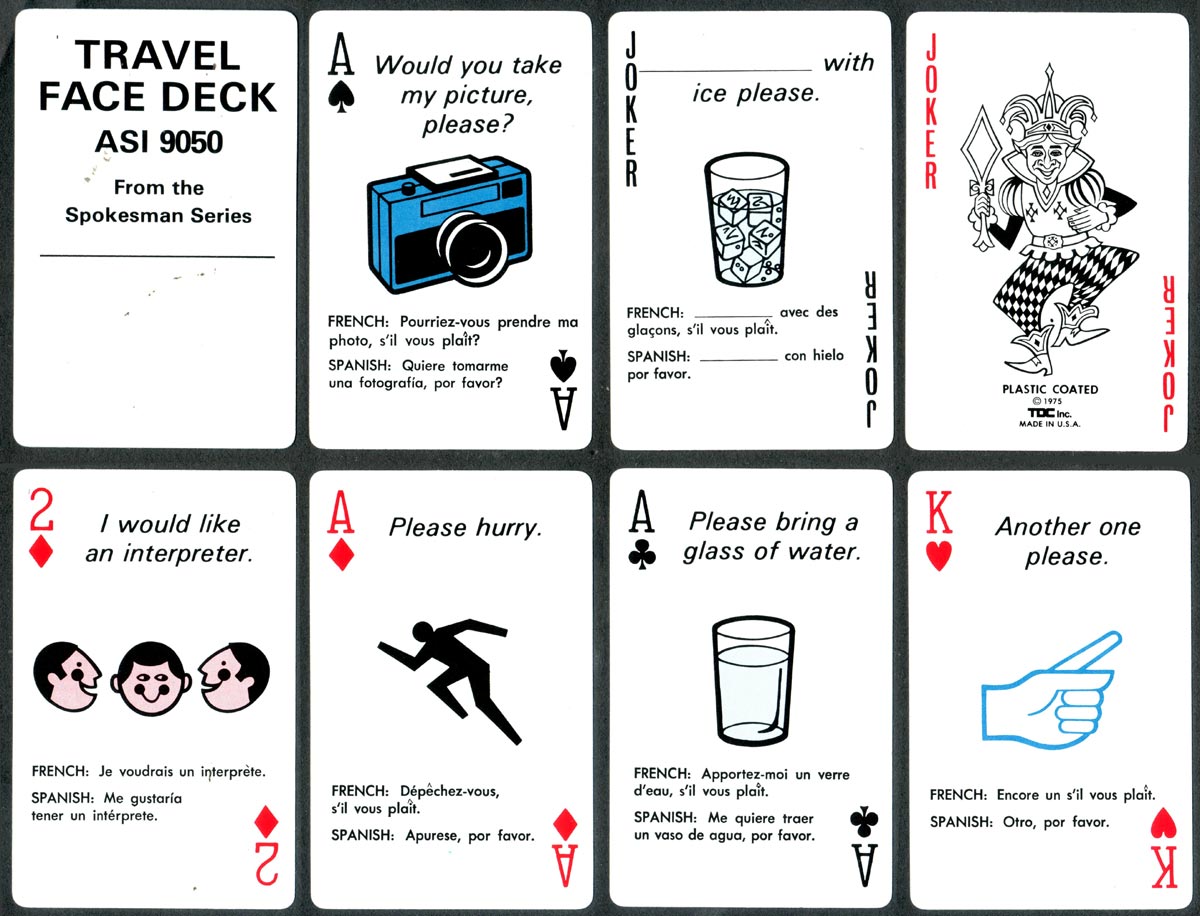 In circa 1975, TDC Inc. was taken over by Shedd-Brown Mfg. Co. of Minneapolis, a calendar printer that specialized in promotional products, when Goren would have been in his late 70s and Heines in his early 60s. Their ages may have played a part in the decision to sell.

At this time Shedd-Brown was owned by Bob White and led by Dean Mathews II who had been the President of Brown & Bigelow, then a division of Standard Packaging, and was well experienced in the playing-card and advertising products industry. 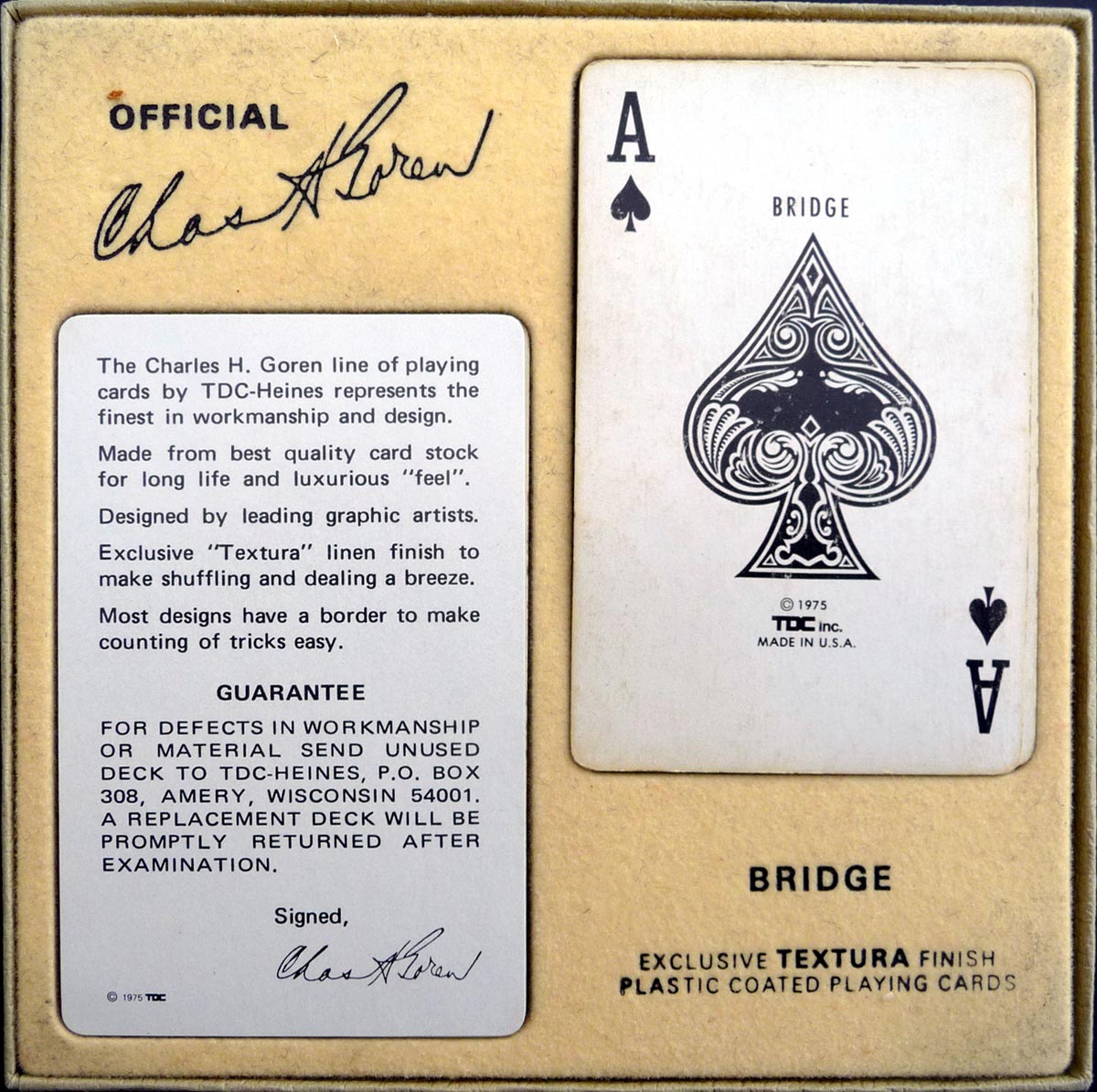 The company re-registered TDC-Heines trademarks, such as the King with a Wand/ Scissors towing trailing suit signs, in 1978, U.S. federal trademark registration was filed for the ‘King with Wand’ logo by TDC Inc., Minneapolis, MN., 55426 (trademark serial number of 73148370); other TDC trademarks were also re-registered including E-z Vu and Textura. Shedd-Brown had a sales team in place for promotional products and at first cards continued to be manufactured in Amery. Dean Mathews III was brought into SheddBrown as General Manager of TDC and was with the company from Spring of 1975 to May of 1977. He found that as a newer player in both the retail and promotional playing-card fields, it was an uphill battle for TDC to generate the volume necessary to become a viable operation. The Goren retail playing-card sales were concentrated around the May-June graduation period, Mothers’ and Fathers’ Days and the Christmas holidays. A sales window of only 2-3 months was not sufficient to make TDC’s retail operations profitable. A project to launch a new retail range of ‘Jimmy the Greek’ line of poker offerings based on the popularity of the well-known poker commentator Jimmy Snyder, aka Jimmy the Greek, and aimed at the mass merchandiser market was not pursued. With the standard cost then of a deck of playing cards in the $0.15-20 range before final packaging, margins were very good, but, as with any enterprise, without the topline volume, the business was just not sustainable. From this point onward TDC cards were to be made only for advertising purposes. At some point, production of playing-cards was shifted to Shedd-Brown’s printing works in Eau Claire, WI.

Above: TDC non-standard aces for Diamond Fruit Growers Inc., 1979. Each of the suits all have the same designs.

TDC Inc. soon established itself as a major player in the advertising playing-card world gaining large corporate customers. Non-standard packs were also designed and printed such as the deck made in 1979 for Diamond Fruit Growers Inc. that features fruit on each suit and a joker copyrighted for 1979. See also “Bridge Challenger”►

1979: Sale of Shedd-Brown and incorporation of TDC Inc. into Hoyle Products. 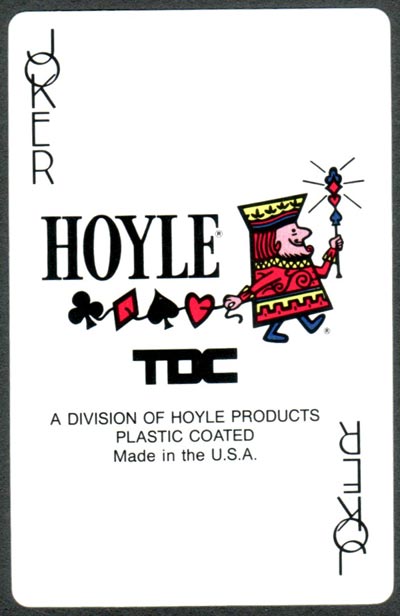 In 1979, Shedd-Brown, including TDC Inc., was taken over by Brown & Bigelow, then owned by Saxon Industries. Both companies had a similar product profile and TDC was incorporated into Hoyle Products, the playing-card division of Brown & Bigelow. To mark the takeover a special joker featuring Heines House’s King with Scissors logo was included in decks. The joker illustrated was included in packs made for North American Airlines and it would be interesting to know whether Hoyle or TDC court cards were used. In 1979 Hoyle Products published ‘Introduction to Bridge’ by Charles Goren and Omar Sharif and continued to produce Goren’s table cloths and card accessories under the Hoyle Products brand although booklet publication seems to have ceased thereafter but some of Goren’s books were printed by other publishers into the 1980s. The TDC trademarks were cancelled in 1980 at the time of the takeover. However, the TDC ‘Prancing Jester’ joker lives on in packs of Hoyle packs produced after the take-over and into the 21st century although the TDC court cards designs have ceased to be used.

The details of 20th century card makers are harder to research than those of the earlier centuries in part due to the lack of a paper trail from taxation records and relying instead on the recollections of former employees. I would like to thank Sue Tobias who worked for TDC in the 1970s for her input, Sue Selseth of Upper Midwest Association of Promotional Professionals who gave valued leads to people involved with the company and Dean Mathews III who worked for TDC after the take-over by Shedd-Brown. Dennis McAnally worked for TDC and many other playing-card makers including RCI and once owned Vegas International Inc., a promotional playing-card company. His contribution was invaluable.