There are three main NZ makers that I'm aware of: A.D. Willis, John Dickinson, and Strong & Ready. They all had idiosyncratic designs. I know little of the background information about the firms, so I have had to make deductions from the cards themselves. What I do know of their history is from information gathered by Mike Goodall, so it's thanks to him that it's reproduced here. For a full list of my New Zealand cards, click here►

An early card-maker, Archibald Dudingston Willis was born in Middlesex in 1842. For 45 years of his life he lived in Wanganui, where his firm was established in 1872. Their first courts seem to have been copies of NYCCC's US6 (unturned) and US6.1 (turned), very similar to ones produced in Turnhout at the time. The earliest pack I know has the unturned courts and dates from c.1880. 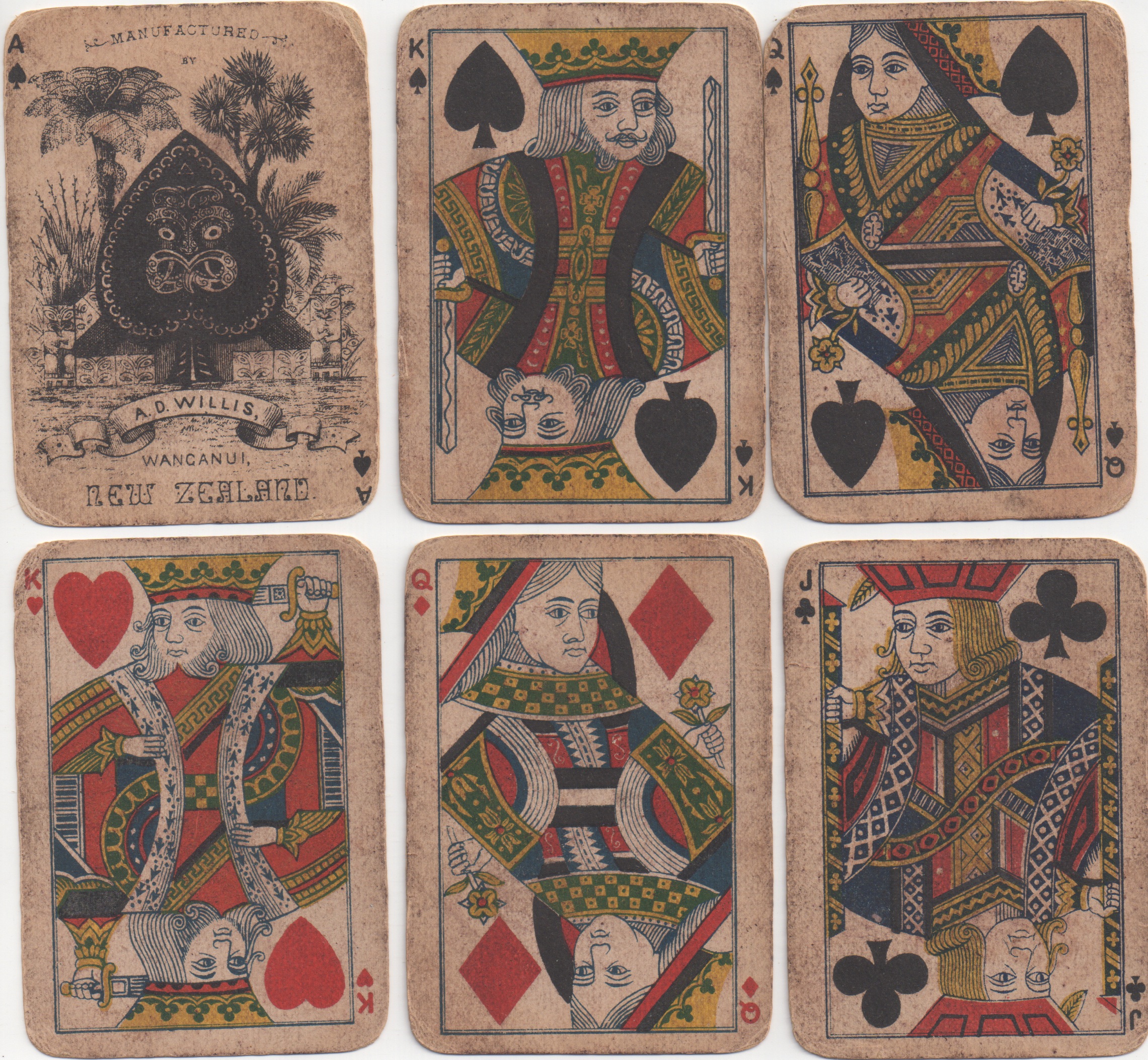 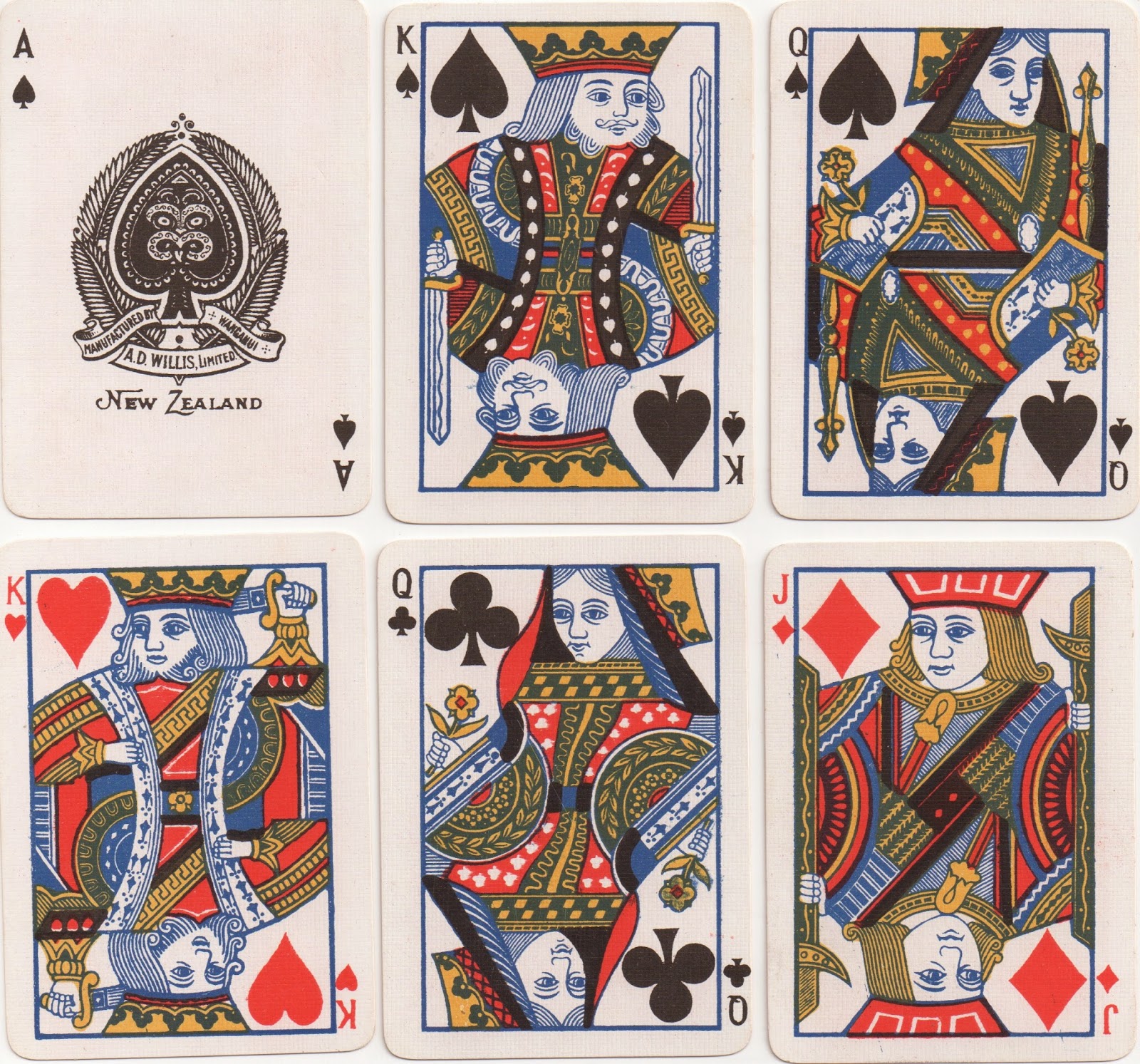 They made Five Hundred packs in the early part of the 20th century and used the above courts in the earlier editions. Then the design was changed with both 4-colour and 2-colour versions. They produced patience cards, too. 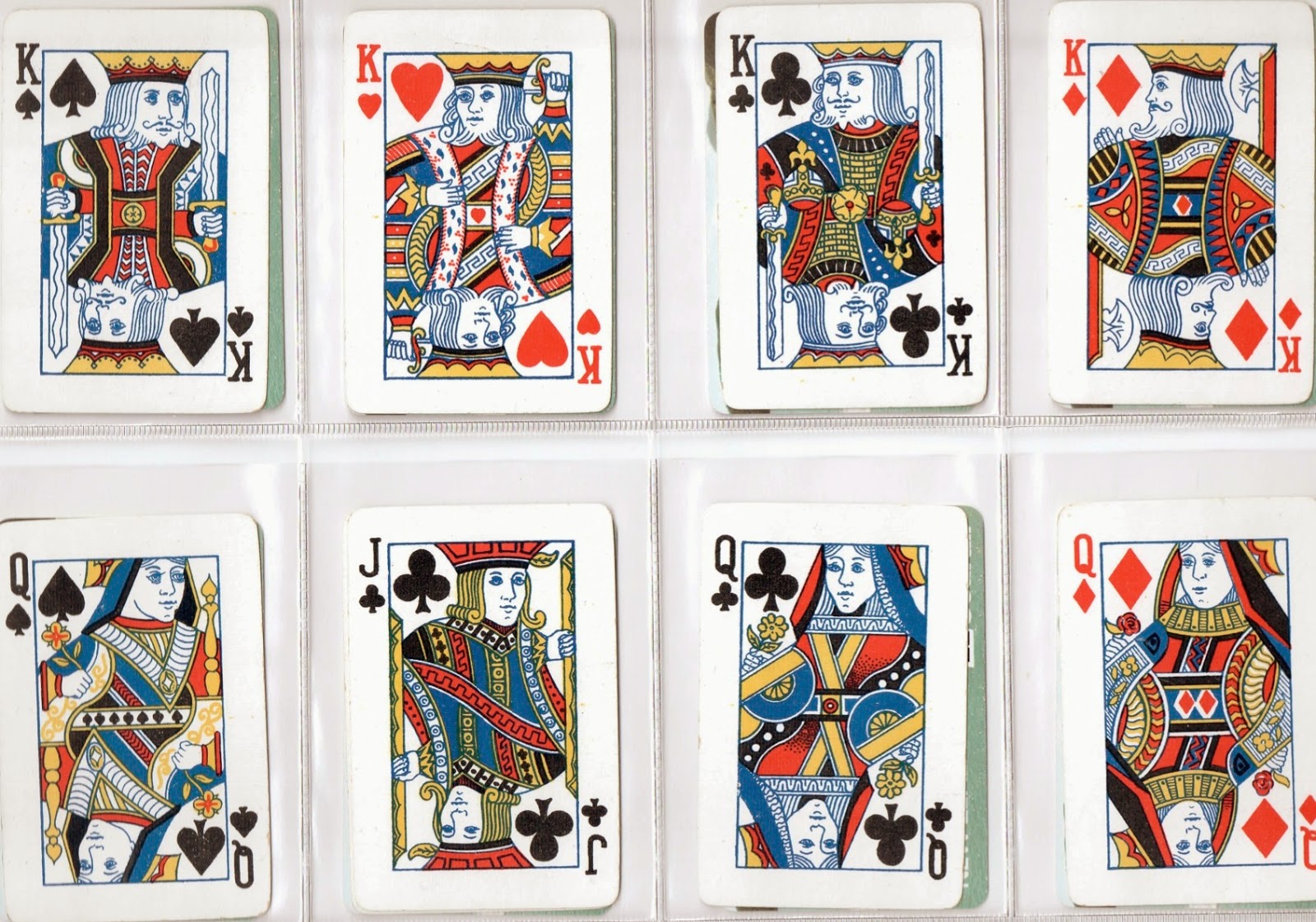 The firm was sold in 1949 to Weeks Ltd, later Weeks Field Ltd. The same courts were used, printed by a firm called United Empire Box Co. (UEB Industries) from the mid-1960s. From 1989-93 Kiwi Packaging took over. 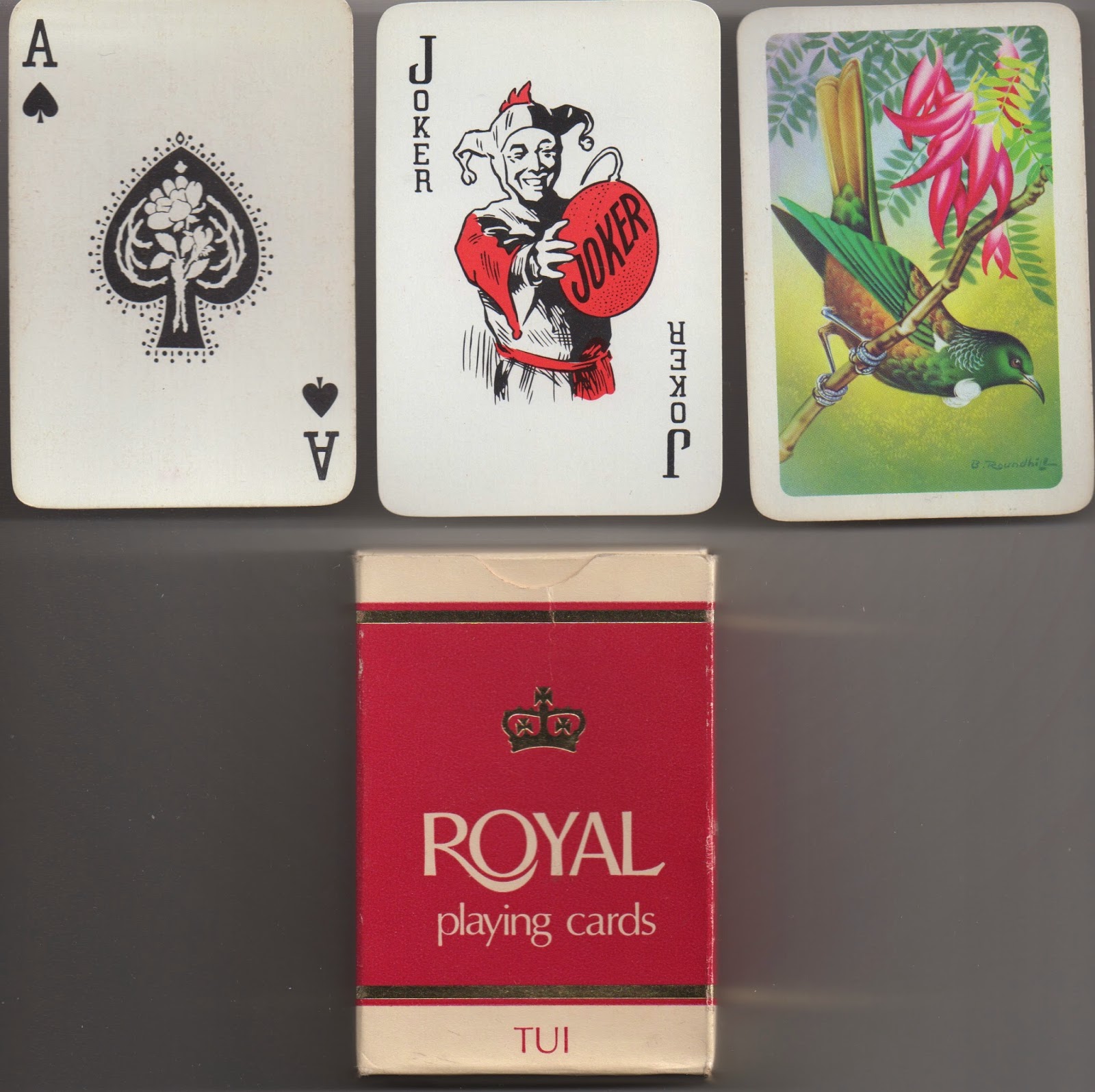 This firm appeared later on the scene in 1920s. The courts are quite distinctive in both two and four colours. 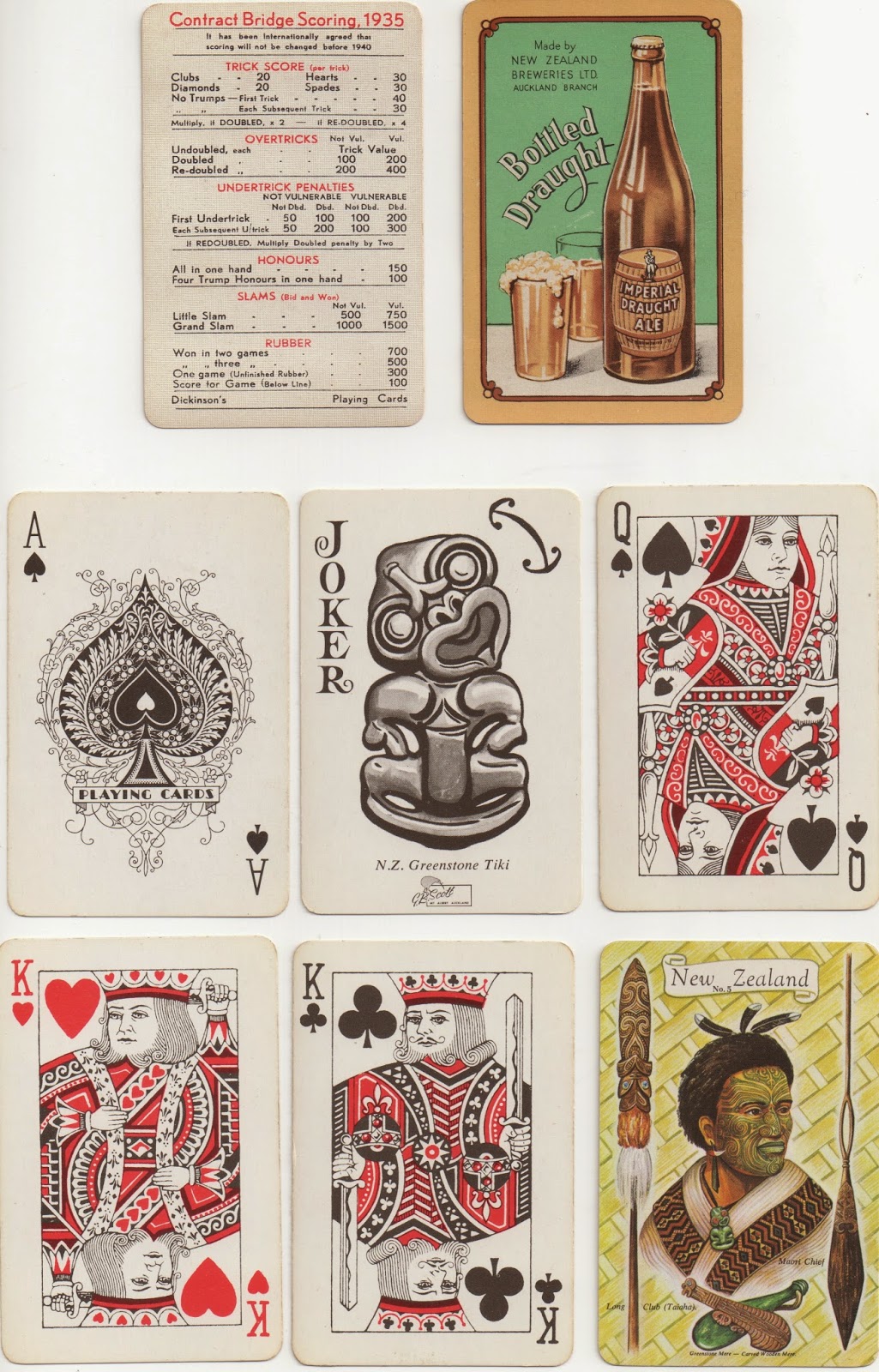 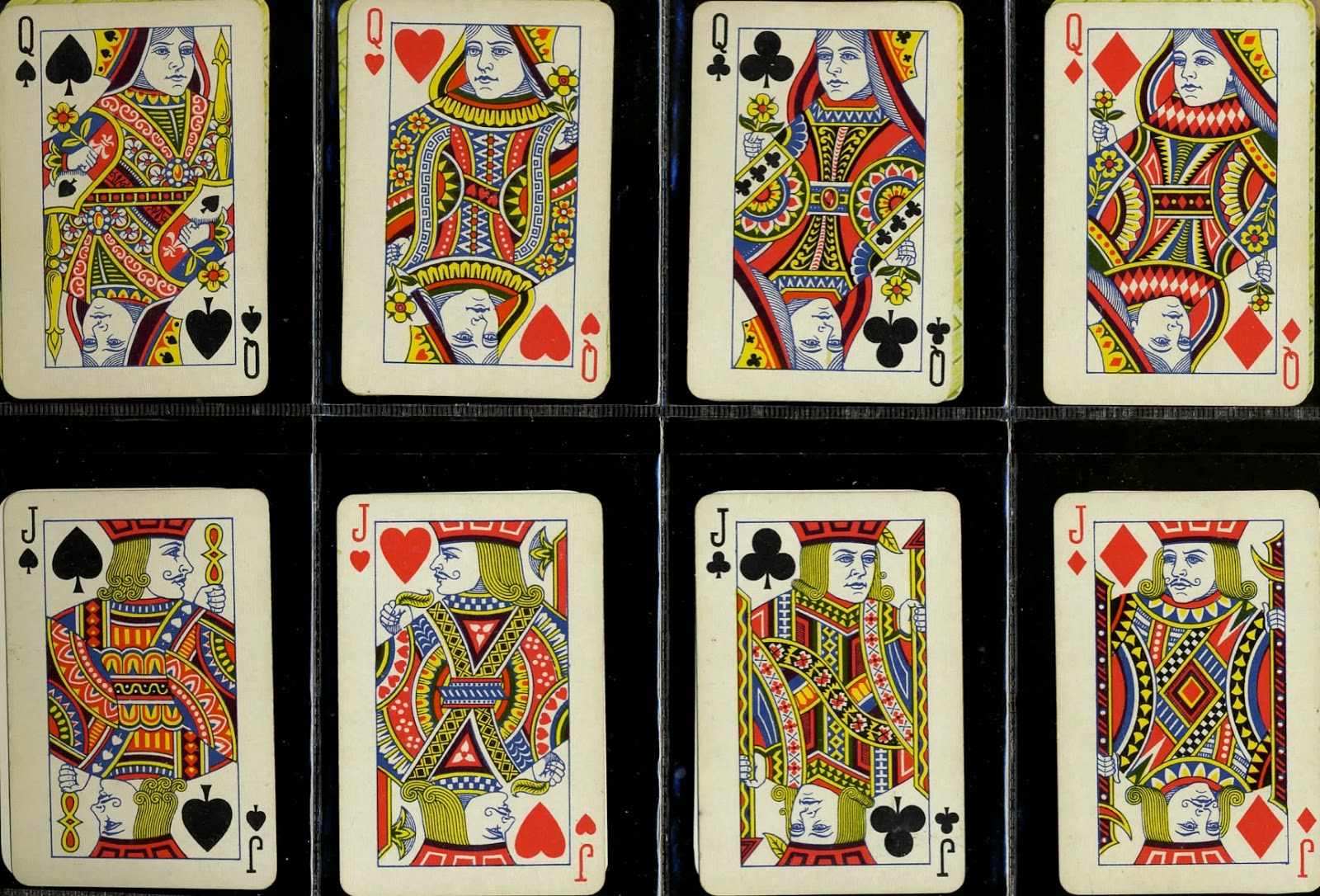 There is an unusual version in which the QC has not been turned, as illustrated below. Whether this means there was an unturned version of all the relevant courts I can't say. The firm became the Dickinson Robinson Group (DRG) some time in the 1980s and the courts were reduced in size.

In the early 1990s Spicers Paper Ltd of Melbourne took over and used the brand-name "Croxley".

The firm started in 1926 in Auckland. The telegraphic address was Toytown, which appears on the later ASs. The first court set has unturned courts in two colours. The AS is a copy of Goodall's anonymous London PC ace. 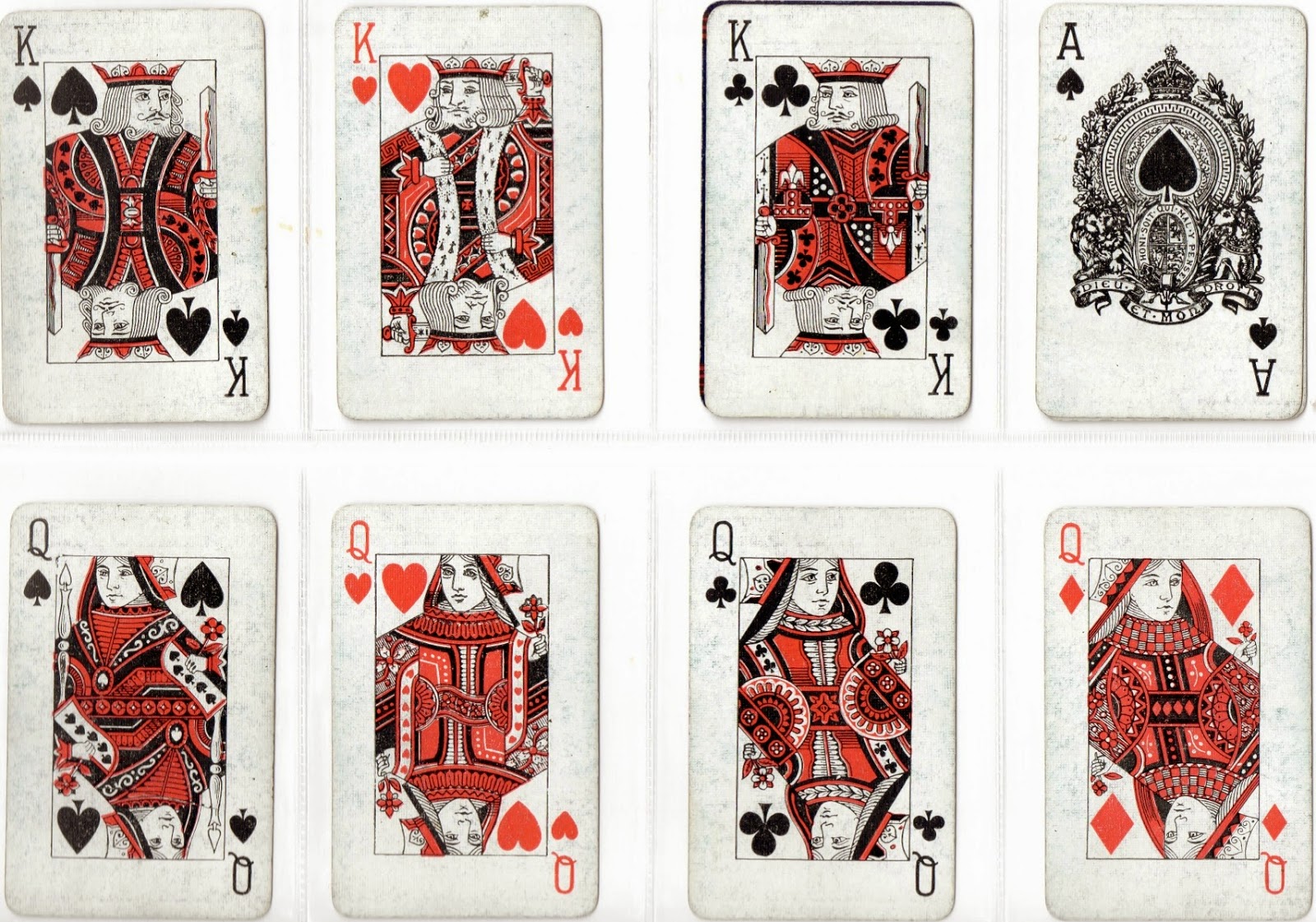 The later version of the courts has six of them turned and is in two or four colours. 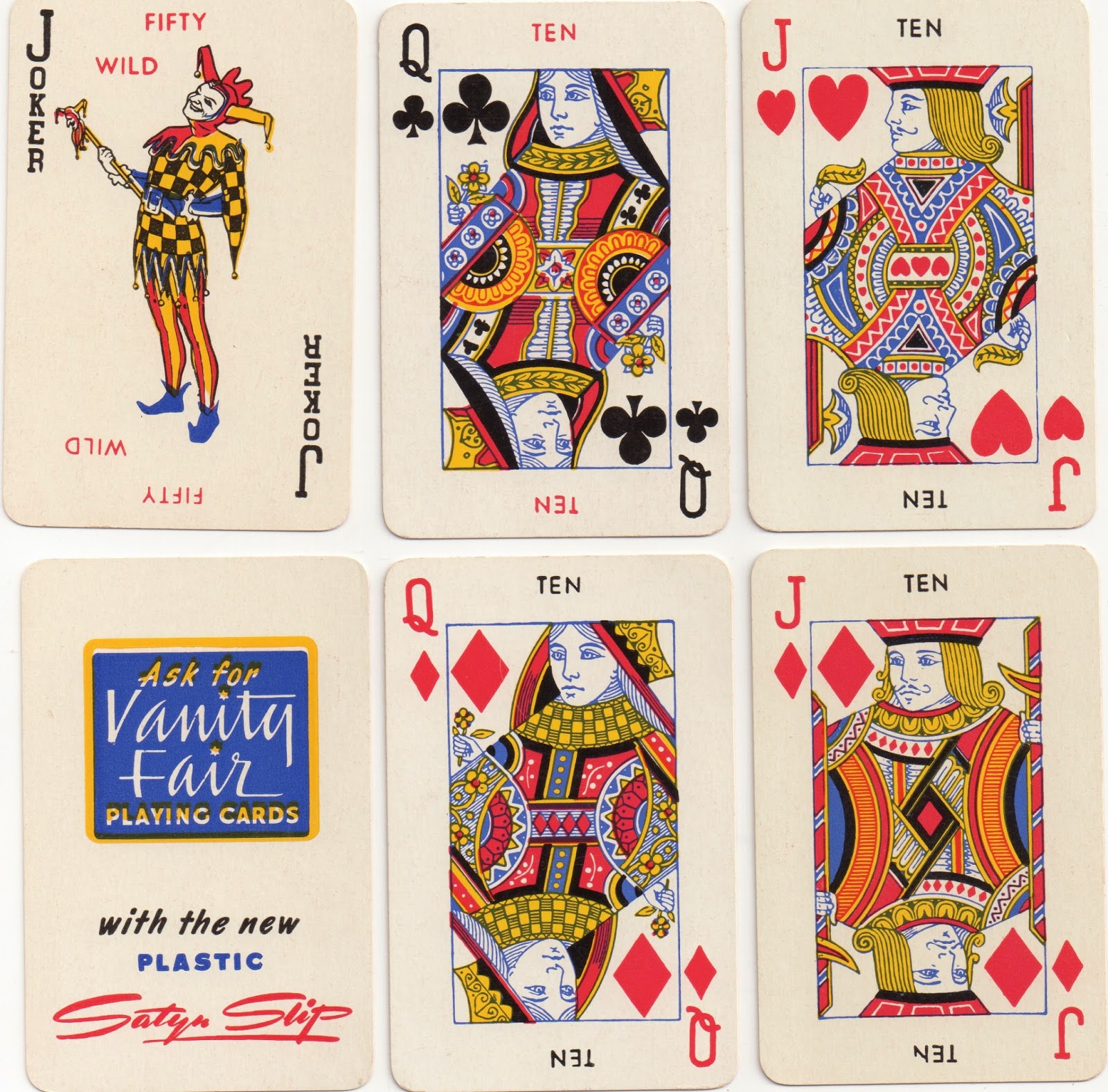 Later courts were smaller in two colours. The AS here is the commonest one. 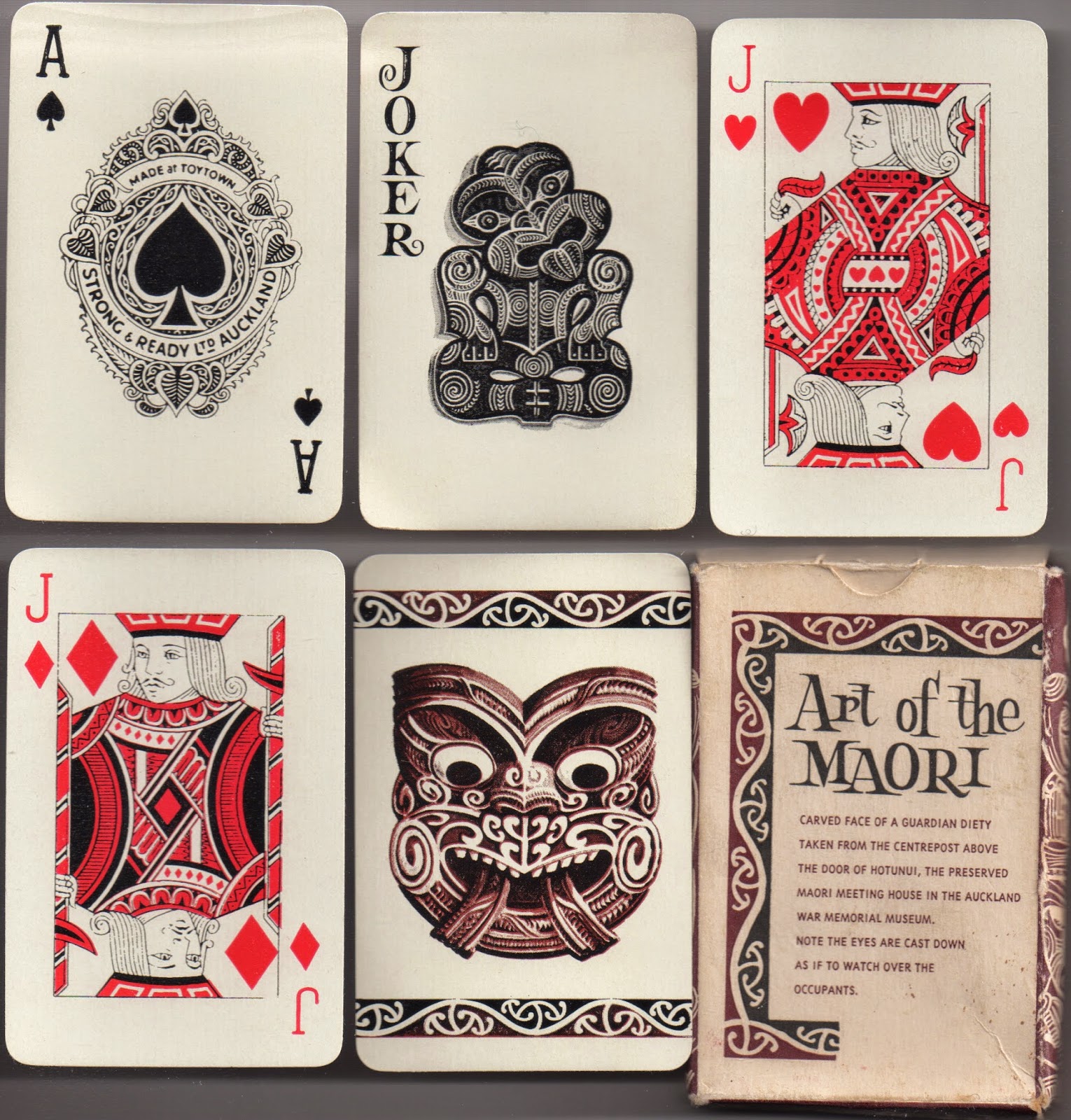 In 1972 the firm was taken over by Tanner Couch Ltd., a wholesale stationers that started in 1956. The AS remained the same with the new name but the courts were Waddington's version of Goodall's courts with a Waddington joker and were possibly printed by Waddington. Later, an unusual version of Waddington's Goodall courts was used with all the queens and jacks turned. The joker is an exact copy of Whitman's. They may have been printed in Singapore or Hong Kong, but that's just a guess. In 1989 the firm sold out to the Australian firm, John Sands Ltd. 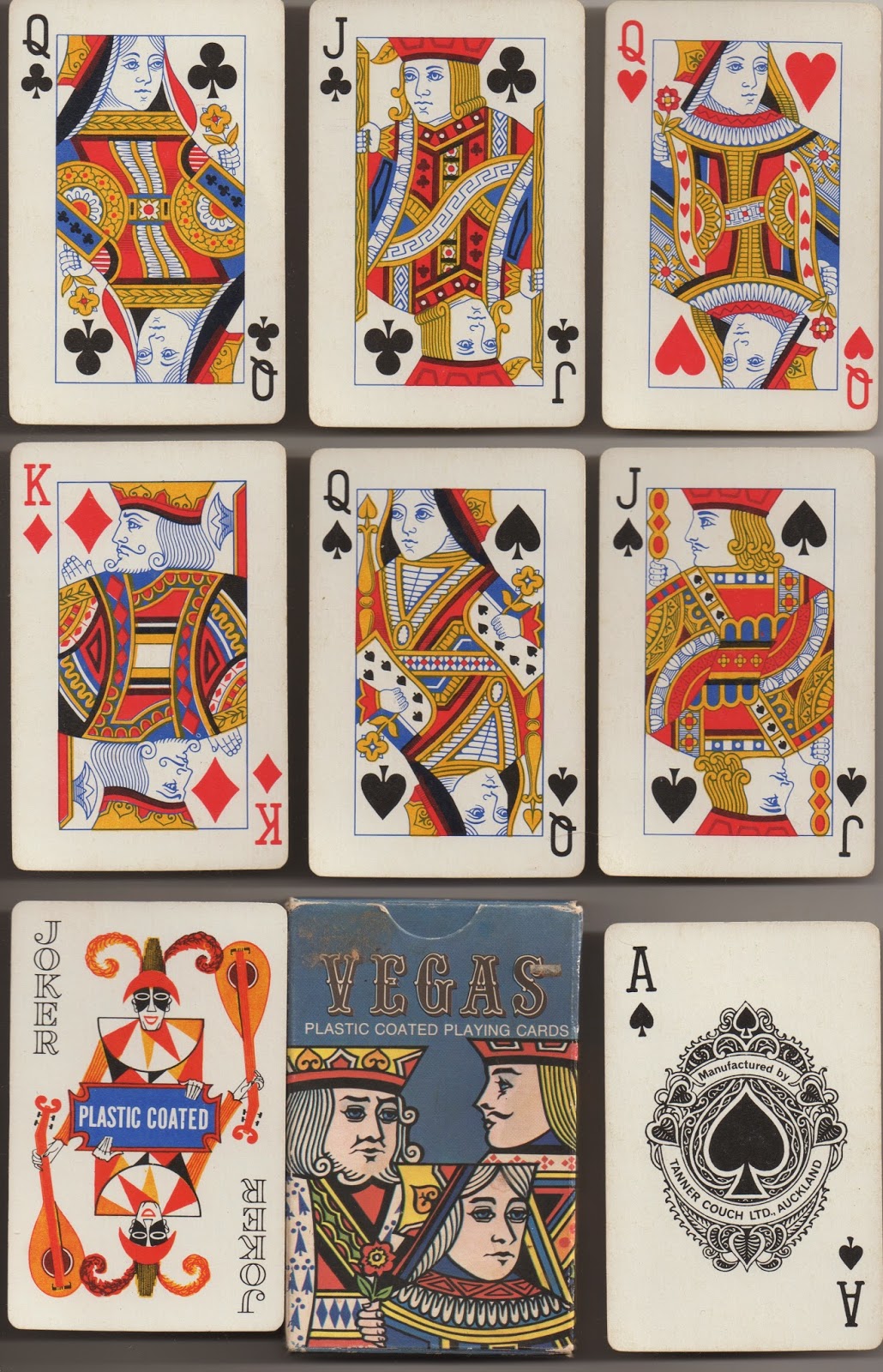 Waddington cards were imported into New Zealand in the 1920s. These were stamped on entry, as in the example below.

The other pack made outside NZ for their market is a pack with 52 photo views of New Zealand placed centrally on top of standard cards. The courts are copies of the NYCCC ones we saw used as a model in Australia and they were printed in Bavaria for Muir & Moodie. 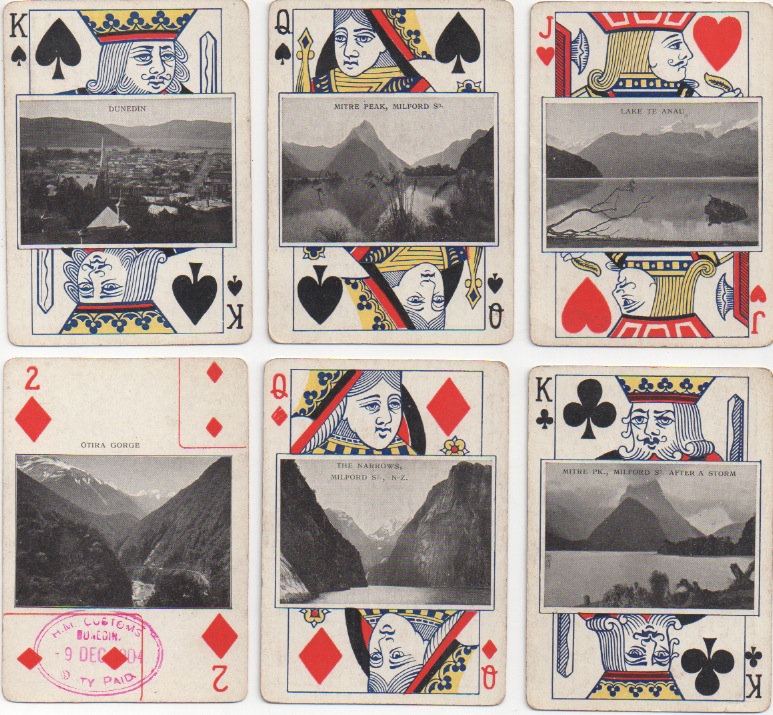 The final pack I know of has unusual courts with profile red kings. To judge by the number cards, they seem to be by Willis, but are otherwise anonymous. 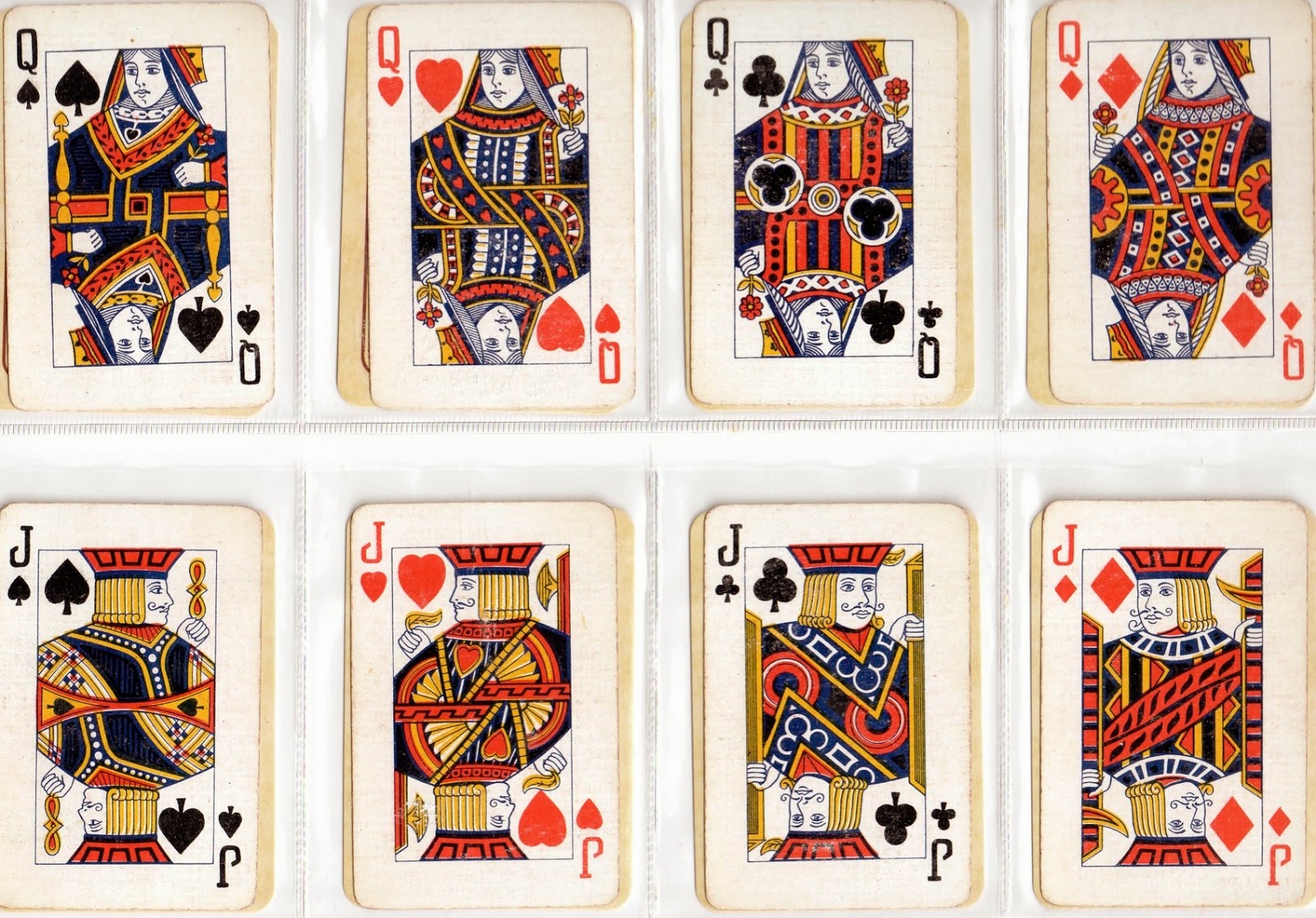 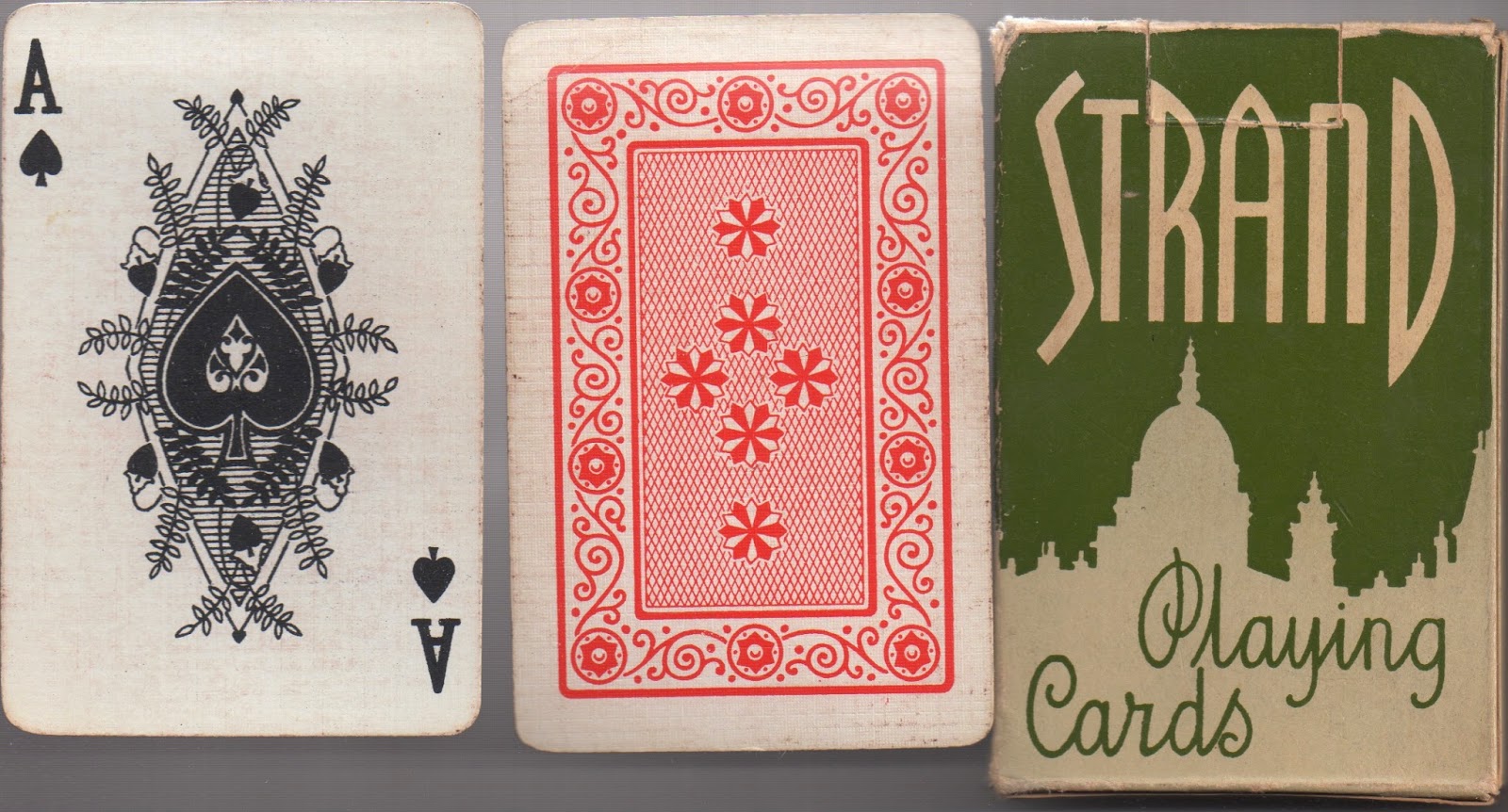 Are you a fan of the undead? Vampires and zombies that have risen from the grave? Then this is a deck for you; the creatures featured on this pack are part-zombie and part-vampire. As Gerad Taylor, the creator of this deck, likes to call them "Zompires".