Continuing my survey of the main characteristics of the wood-block courts, I will look at the hearts. But first I start with an oddity, an anonymous Garter AS with courts with unusually shaped eyes, neither Type I or Type II; they don't fit with any of the makers I know but nevertheless maintain the traditional characteristics. It's difficult to tell whether it's a fake or not; the AS looks genuine, but anonymous Garter aces are not listed anywhere. 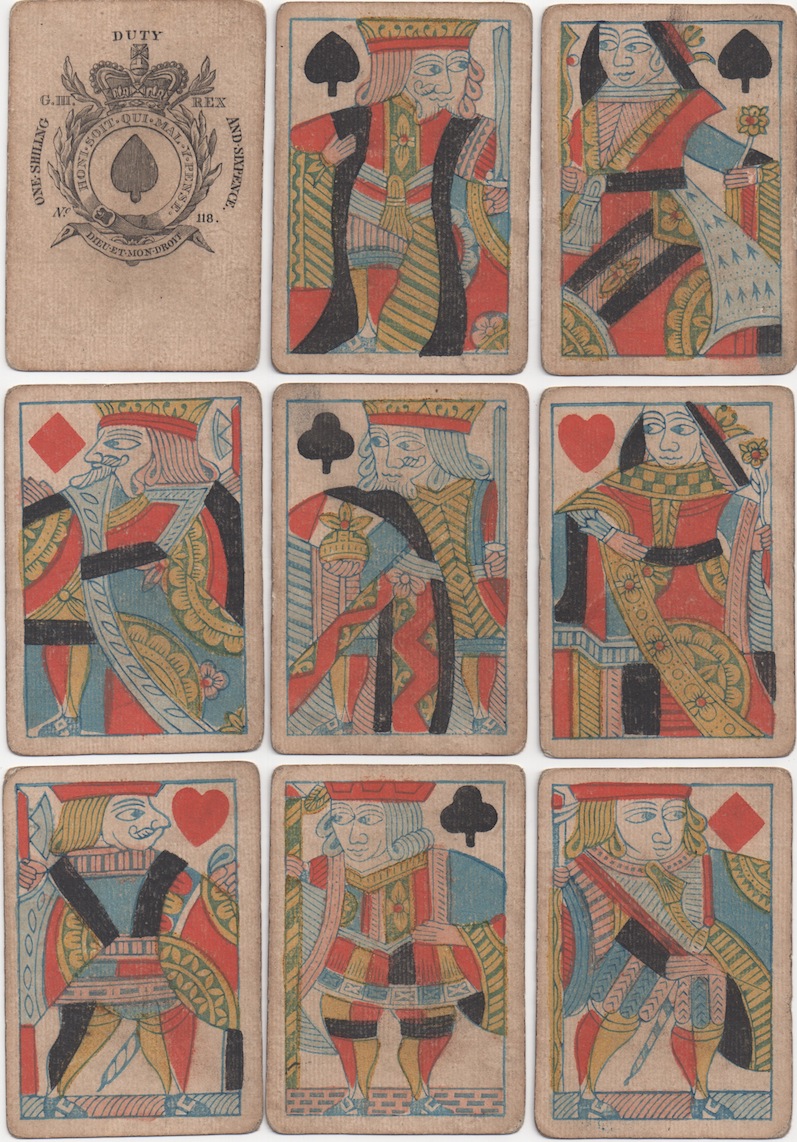 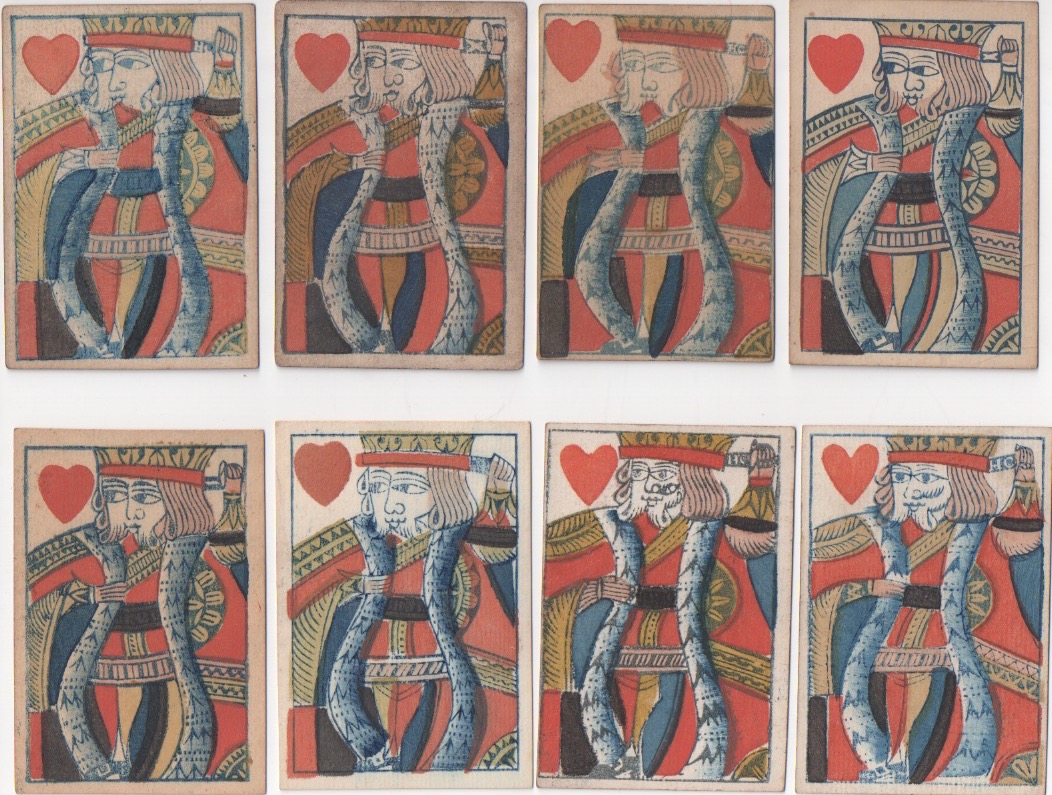 KH1 has Type I eyes, no moustache, a dog-tooth decoration on his shoulder on the left, crenellation on his cloak right and B/R inside his cloak by his leg; the crenellation can sometimes appear to be a thick zig-zag line, if it is poorly cut and has a lot of ink on it. The other variants relate to the colours at the bottom of the design: KH1a has B/Bk/R by his leg; it is often difficult to tell whether the colouring includes black or is just an overlap of the other two colours; KH1b has Bk/R bottom left, rather than R/Bk (by Wheeler); KH1c has B/R/Y (the odd Fuller pack referred to on page 70); KH1d B/Bk/Y, another Fuller pack; KH1e has Y/R on his leg, rather than the usual R/Y (Hardy).

KH2 has Type II eyes, a moustache, a fishbone decoration on his shoulder left, crenellation on his cloak, B/Bk/R by his leg and R/Bk bottom left (early Hall). 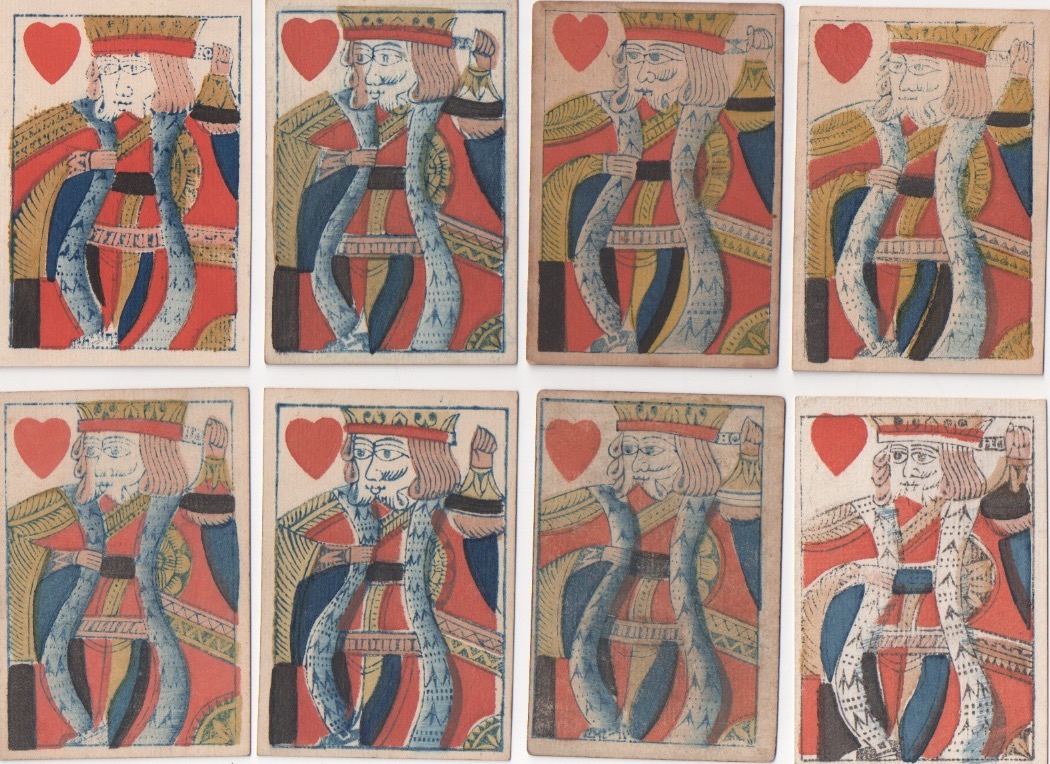 KH3a has his shoulder and sleeve decorations on the left joined; there are some variants in the colouring of his cuff on the right: White, R or Y. The first could be an error for red. The example second left on the bottom row is odd in that his sword is missing.

I've added the odd KH because it looks like one by Hall but has a black rather than a blue outline; it has mixed characteristics of KH2 and KH3 and both crenellation and dog-tooth on his cloak, R/Bk bottom left, but cheek shading. 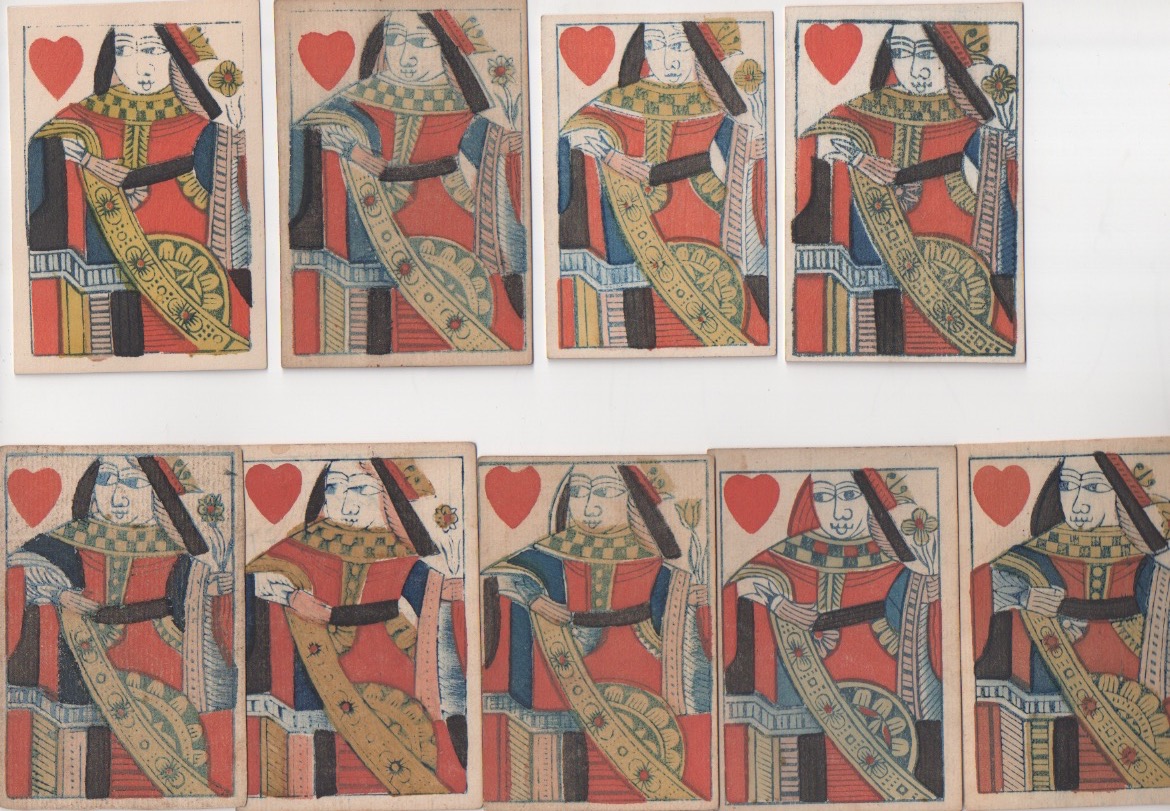 QH1-3a have Type I eyes only; QH5 is odd in that she has one eye of each type.

QH2 has R/Bk/R/B below her arm and thin horizontal stripes (Hunt, Goodall).

QH3 has R/Bk/R/B below her arm, buttons on her bodice, diagonal stripes and dots on her skirt and dots on her sleeve edge on the right (Brotherton); QH3a has B/Bk/R/B, but is otherwise the same (Stopforth; the black on the left seems to have covered the space for the first red); QH3b has thick and thin stripes on her skirt instead of dots (Hardy).

QH4 has Bk/R/B/R below her arm, buttons, diagonal stripes and dots, and holds a tulip (Wheeler).

QH5 has R/Bk/R/B, a jagged design on her bodice, diagonal stripes and thick and thin stripes on her skirt, stripes on her sleeve edge on the right and red on her headdress on the left (odd pack from Fuller). 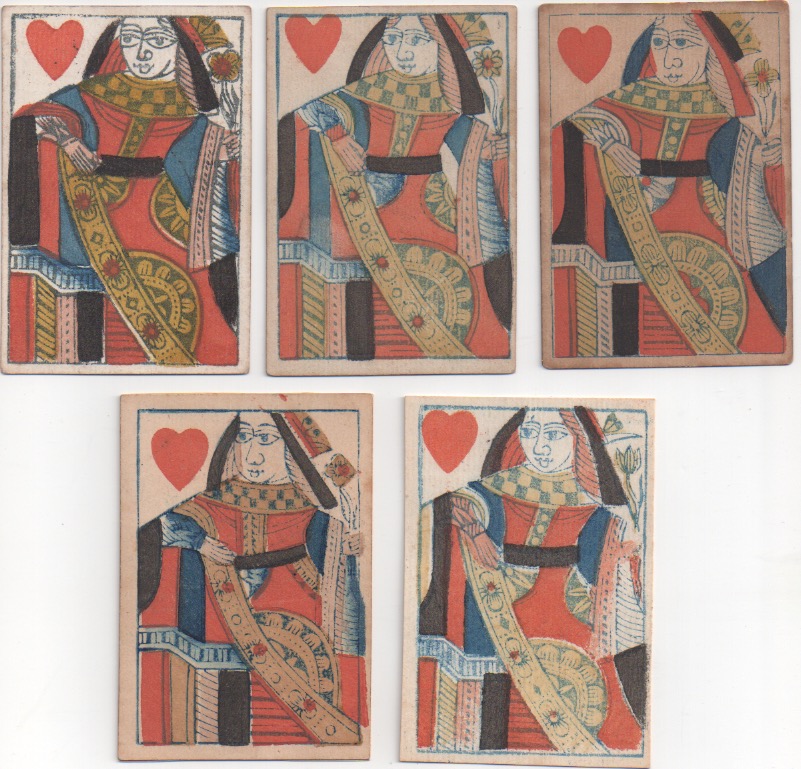 QH4a has no tulip; the Bk/R/B below the arm of the first example is inherited from the earlier Llewellyn packs (Hall).

QH3b has dots in this case and a long face (Creswick, Stone).

QH7 has Y/Bk/R/B below her arm, diagonals and dots, and holds a tulip (Gibson, Hunt). 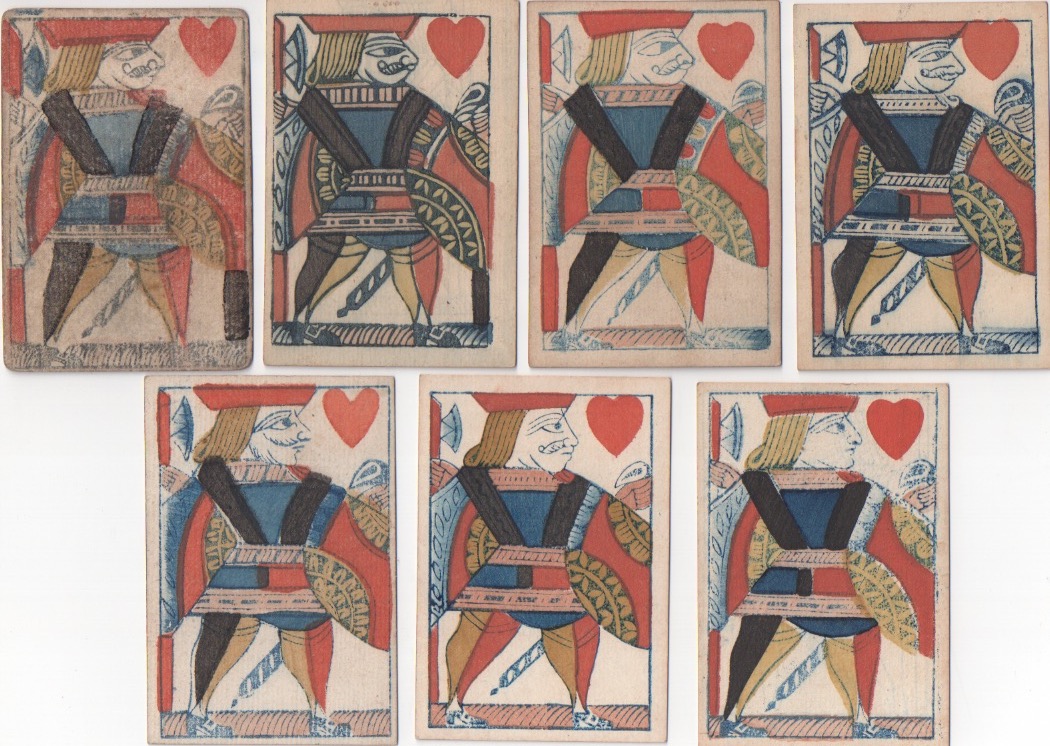 JH1 only has Type I eyes; the blue and red on his tunic may sometimes overlap.

JH1 has a moustache, a staff base, B/R on his tunic and Bk/Y on his leg on the left; JH1a has no staff base (Stopforth).