A survey of the cards made by Creswick and Hardy, with a brief mention of De La Rue, Goodall and Reynolds.

Thomas Creswick’s father, James, was a stationer and paper maker back in the closing years of the 18th century. It is not until 1820 that the first Garter AS in the name of Thomas Creswick was issued. It is quite surprising, therefore, that his output was as high as 39,160 in 1824, the second largest output in that year for the home market. In 1824 both Thomas and his brother, William, have separate stationer's businesses, though William, even though he is a papermaker, does not make cards. Creswick seems to have redrawn his court figures in his own style (Type IV), which don't seem to have been used by anyone else. These courts are found with both Garter and Frizzle aces. The red jacks, which were usually printed using a separate block (2 jacks x 5), are of Type III, the kind used in particular by Reynolds. I have never seen red jacks that are consistent with the style of Type IV. Around 1825 he seems to have taken over Stone's business and uses his courts (Type IIc) in some packs or packs have Type IV courts with Type IIc red jacks. 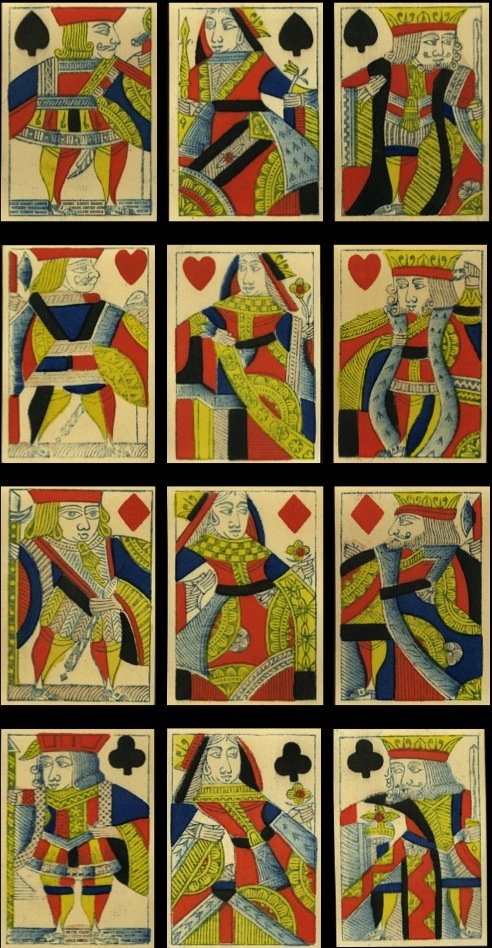 Most of his cards are of this type, but he also produced a non-standard pack called Imperial and redrew his standard courts in a less stylized way - see page 19► 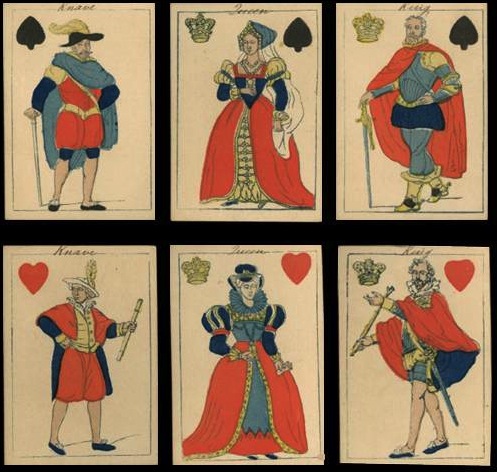 The redrawn version of the standard courts is referred to in a review in the Journal of Belles Lettres from 1827: 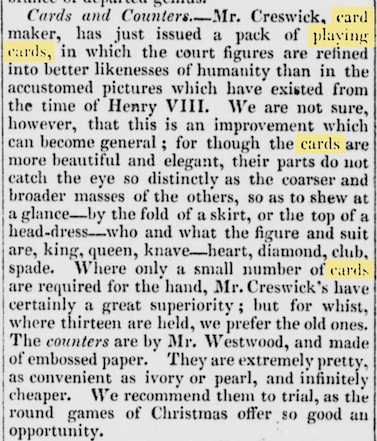 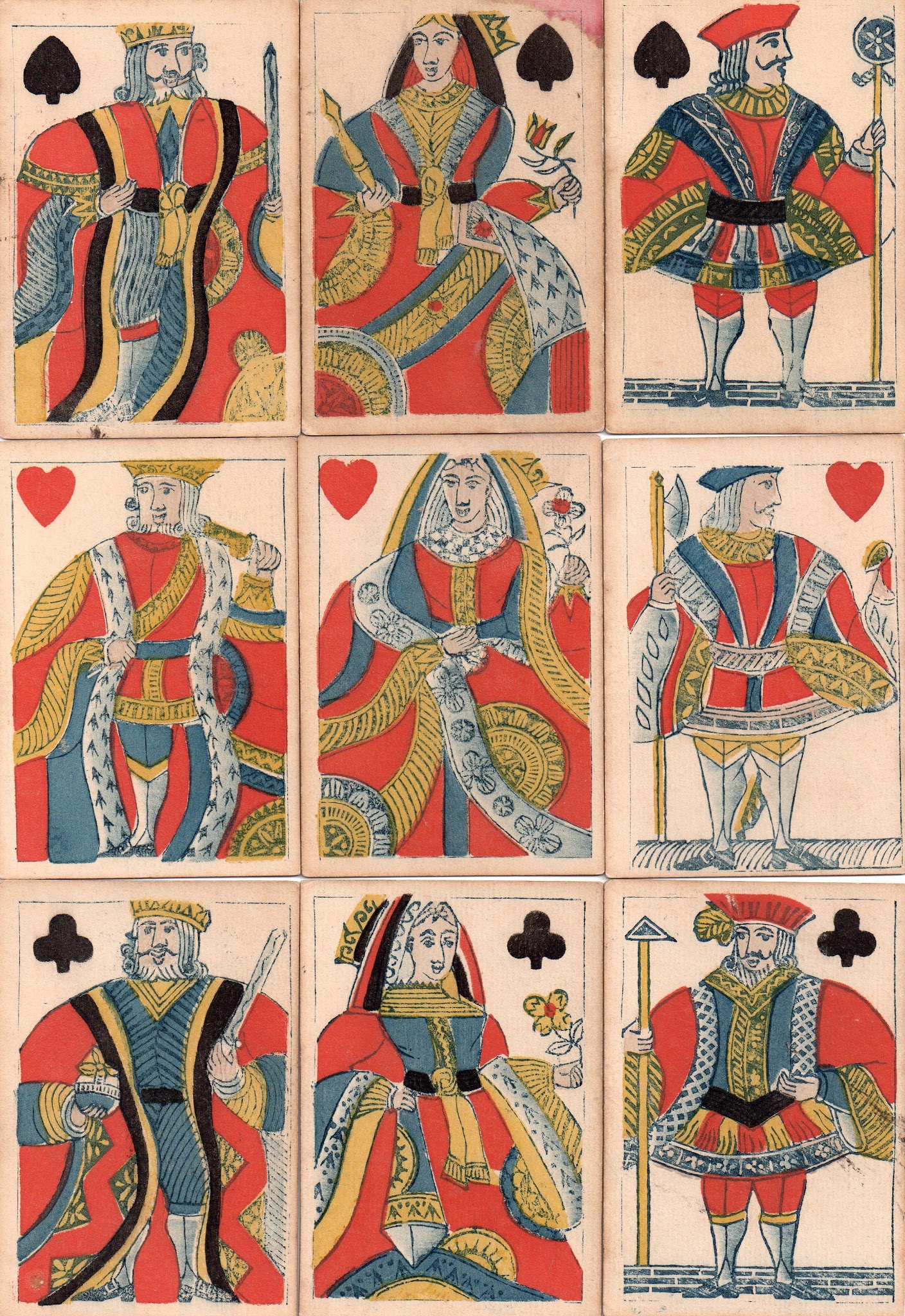 Thomas died in 1840 and William took over the business or just amalgamated it with his own. By the 1850s the firm seems to have decided to stop making their own cards; they don't appear in the De La Rue archive sheet. Packs with a Thomas Creswick Old Frizzle probably finished in the mid-1840s. But there are two more examples that possibly belong to this maker, although the Old Frizzle with the single-figure one is anonymous and the other has no AS, as it is a 'damaged' pack (another tax dodge) - see page 15► 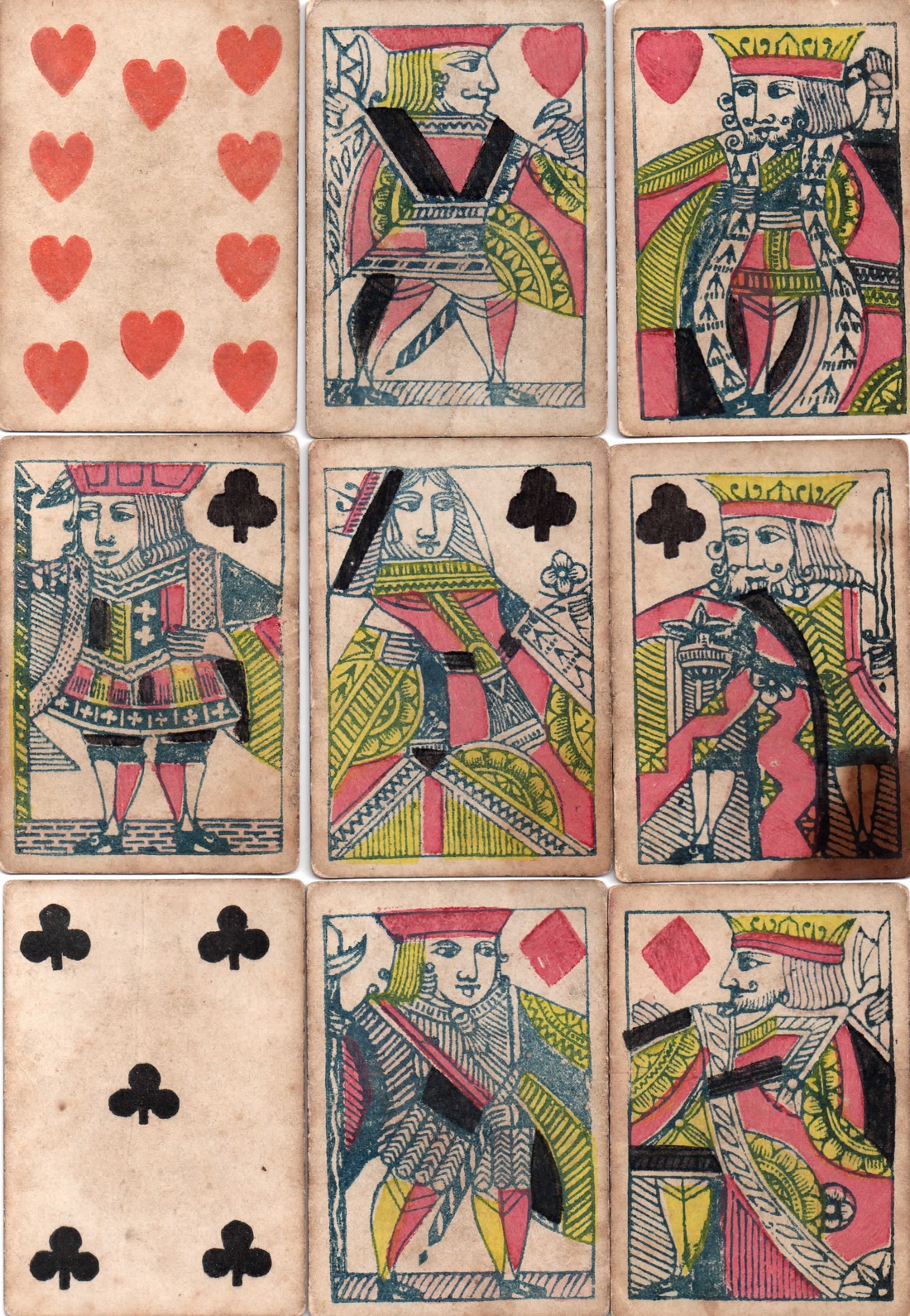 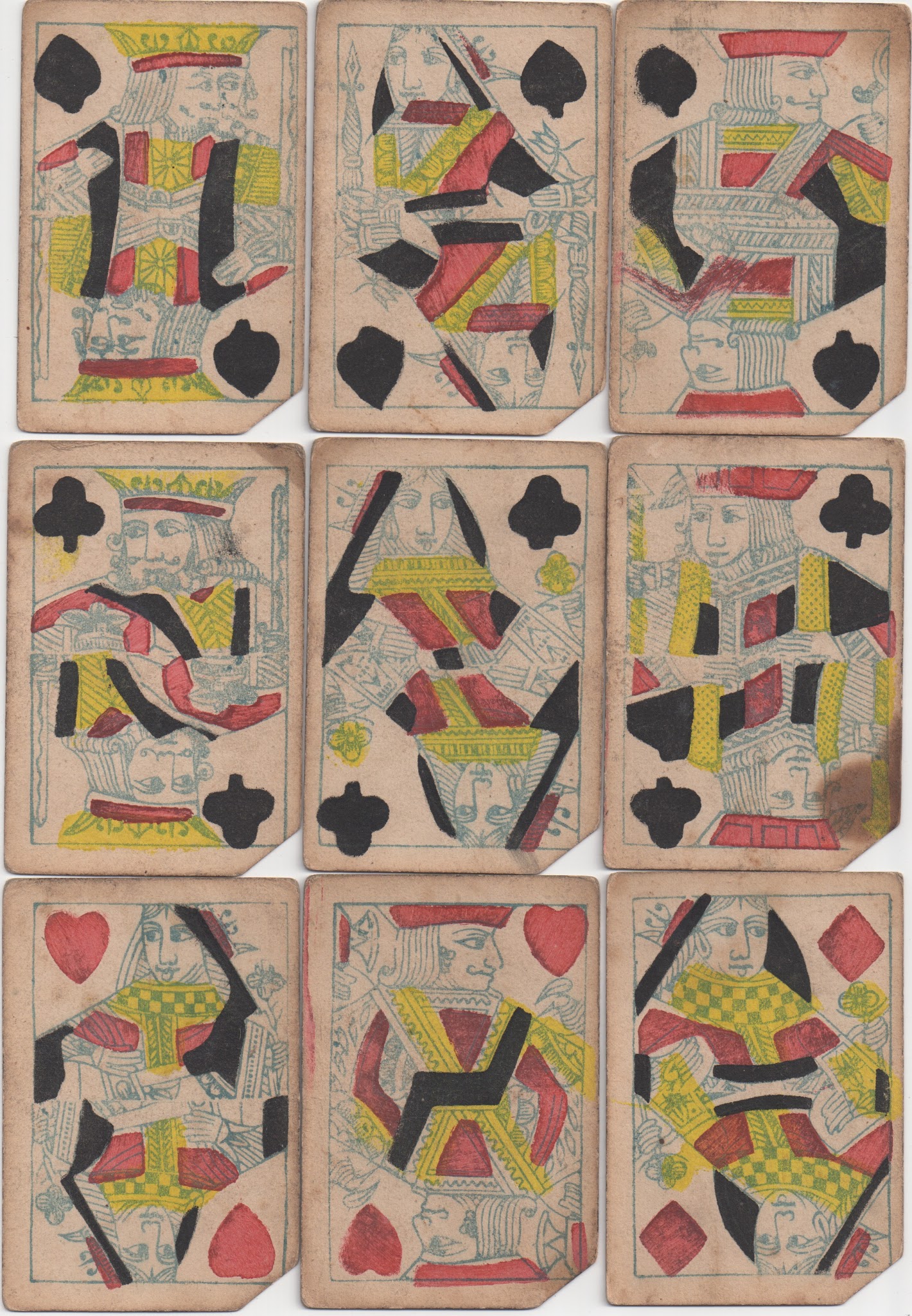 Above: Whoever made these, they represent poor production materials, but they are copies of the Type IV courts/III red jacks pictured above, and this design was only used by Creswick, as far as I know.

The smallest of the firms in terms of production levels, but a long-lasting one nevertheless. The second son of an earlier cardmaking Hardy, James started his business in 1798, when that of his mother and older brother was near bankruptcy. Hardy & Sons continued in business until 1853. (Again, he doesn't figure in the De La Rue sheet.)

His first courts were of Type I with characteristics that are specific to him: the droopy moustache on the JS, the toothless-looking mouth of the JH, the single line for the mouth of the KD with his beard attached directly onto it, and for the non-profile courts the lips are very curly in comparison with similar courts by Hunt, for example. 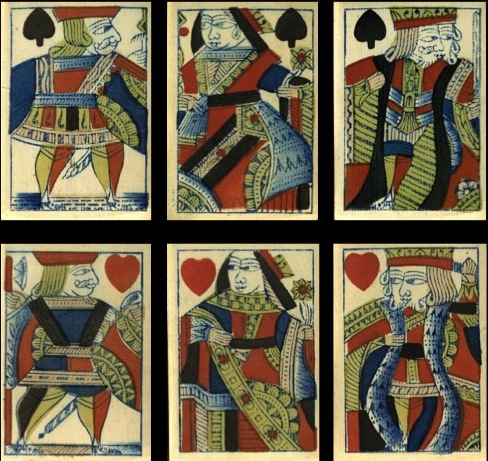 At some point around the introduction of Old Frizzle or just before he used Type III courts, like those of Reynolds. A number of makers at this time went over to Type III courts, including Henry Wheeler, Turnbull, Woolley & Sabine and Stopforth, but I don't know whether this indicates that a new block-maker came on the scene around this time to supply them. 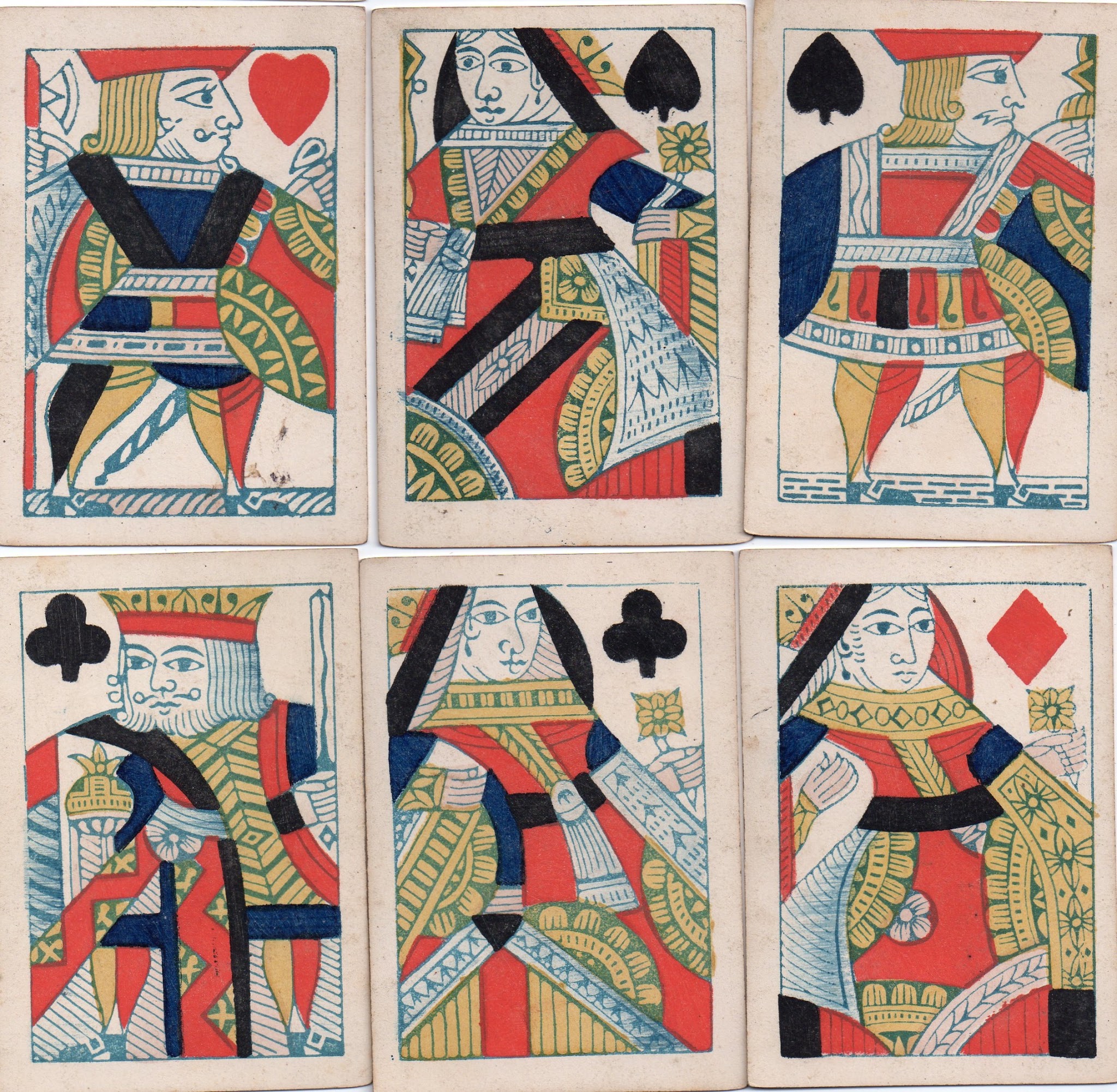 But Hardy soon redrew his courts, based on Type III, with curlier hair drawn as single lines and single-line moustaches. These are only found in Hardy packs. 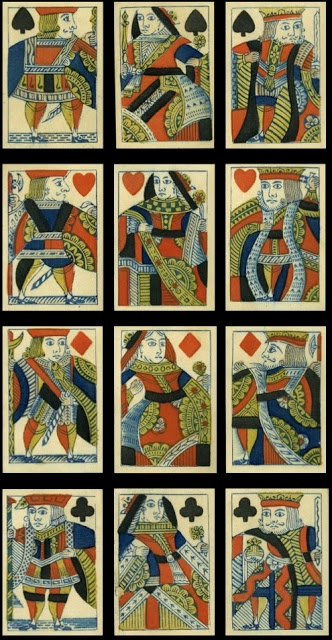 There is also an unusual version of the courts, which have a different style of drawing, which doesn't look English. These are found with Old Frizzle. 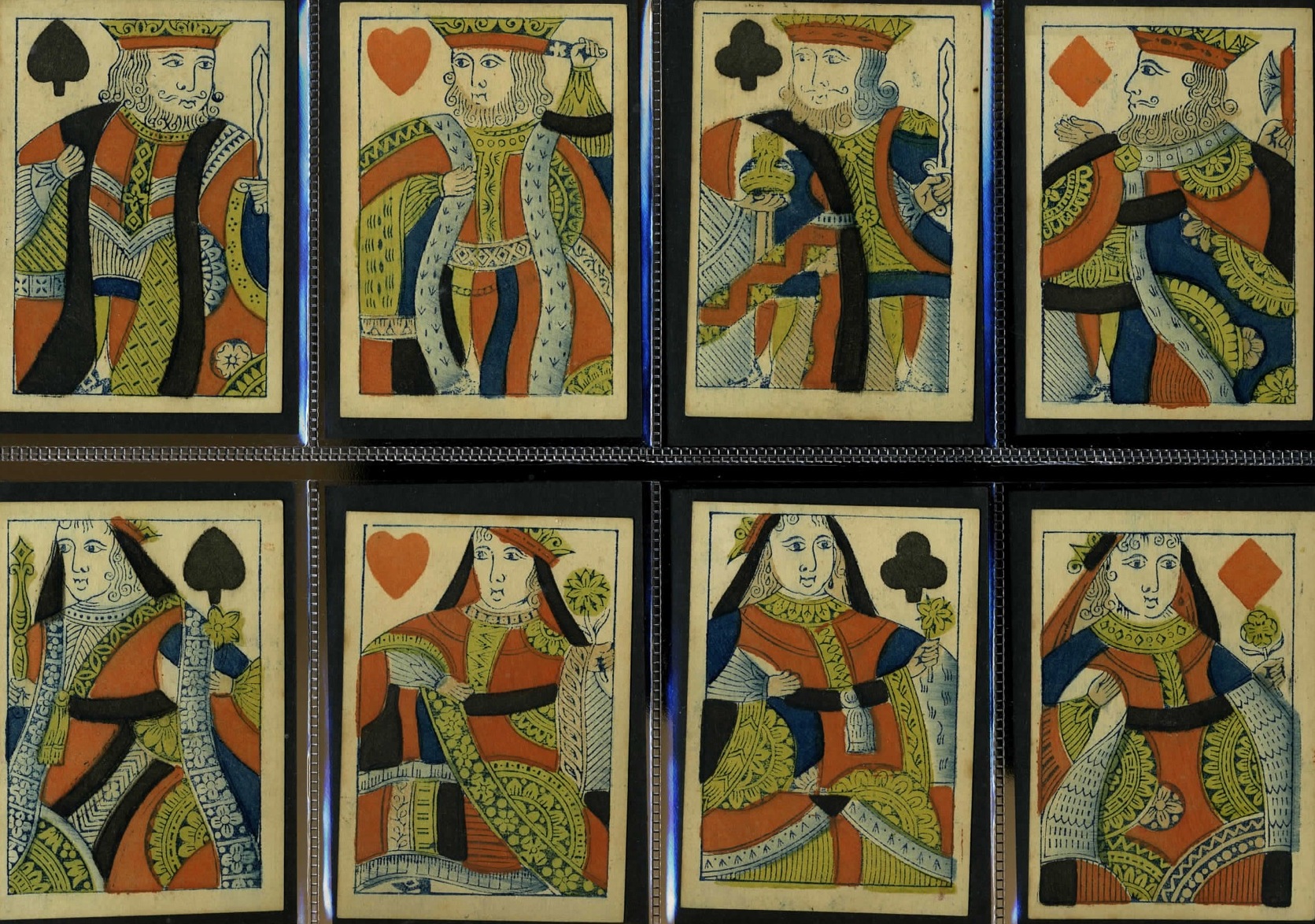 A most unusual product, imported by Hardy from France, was a double-ended pack of the standard Paris pattern by Dumoutier of Nantes, sold with an Old Frizzle AS.

There is even a double-ended version of Type IIIa, which must have been produced towards the end of the firm's activity. 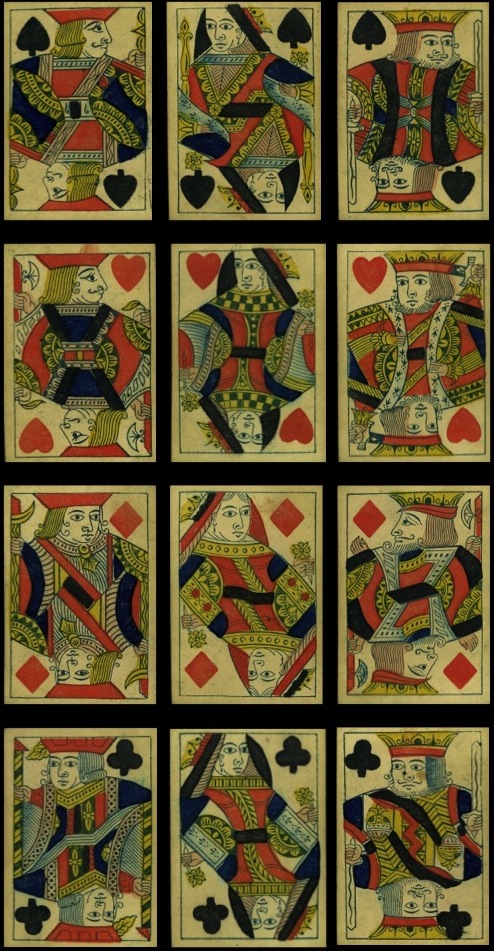 Also at the end of the firm's activity is quite a different type of pack. In this case the cards are by Van Genechten, from the same plates as a pack imported by Ansell, but with a Hardy Old Frizzle. Maybe this was an attempt to modernize the look of his cards. 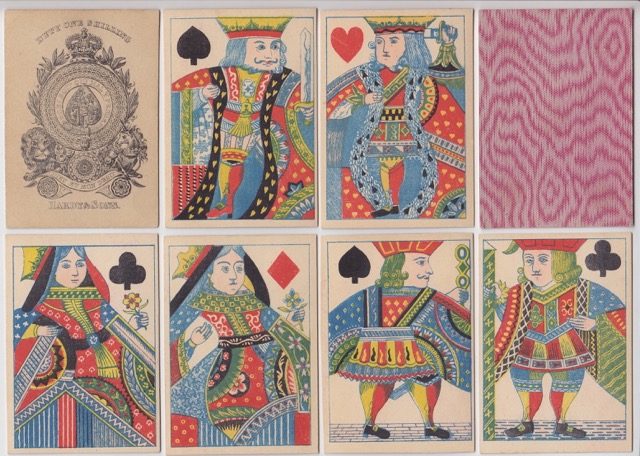 Above: thanks to Paul Symons for the image.

DE LA RUE, GOODALL and REYNOLDS, the big players of the 1850s have all been dealt with in some detail in many places (see page 5 on De La Rue, page 12 on Goodall and page 50 for Reynolds), but here is a glimpse of some of their early packs. 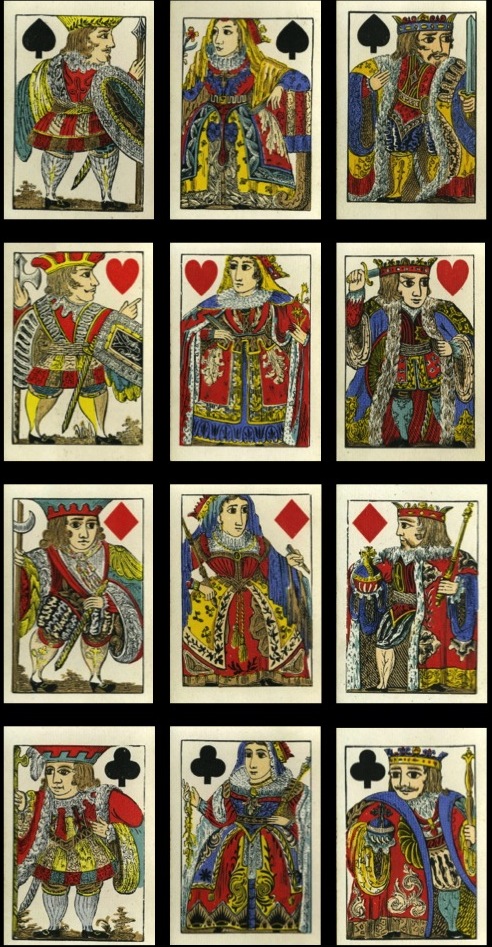 Above: De La Rue's first design (D1), which was submitted for his patent along with the more traditional style, based on Type III (D2). 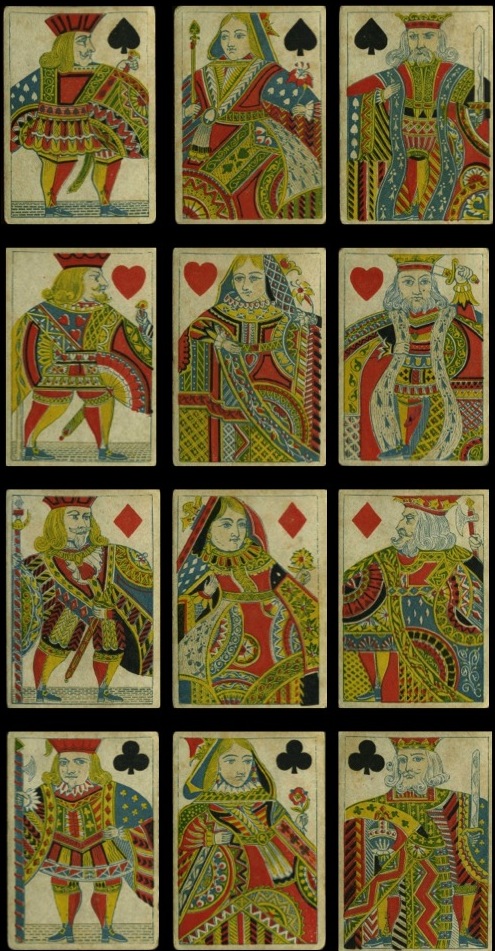 Above: Goodall's second redrawing (G2) from the 1850s, though it has been found with a post-Frizzle AS. The KS has had the position of his head changed and the KD has lost a hand. 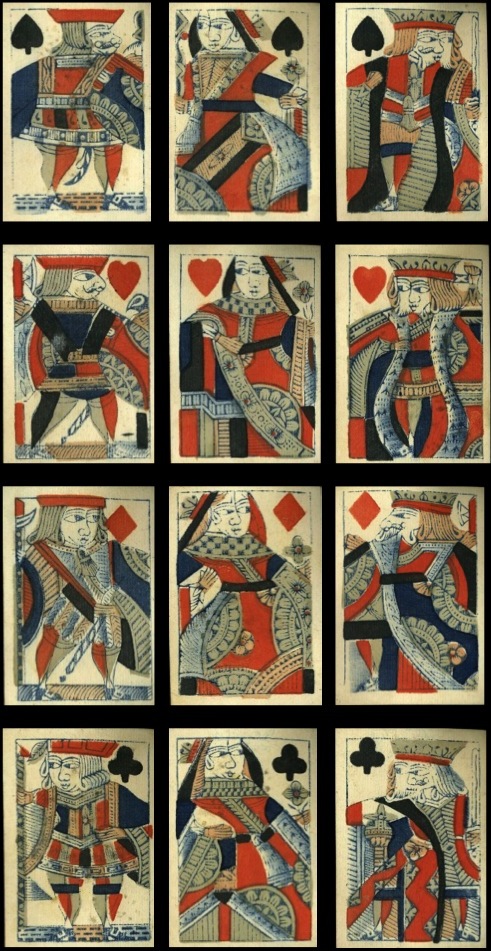 Above: Reynolds' first courts were of Type I, not surprising, as he was apprenticed to Hunt. These courts can be found with both Garter and Old Frizzle aces (c.1809-30).

And as a finale, here are four courts from Reynolds' North German pack (from the Cuming Museum). 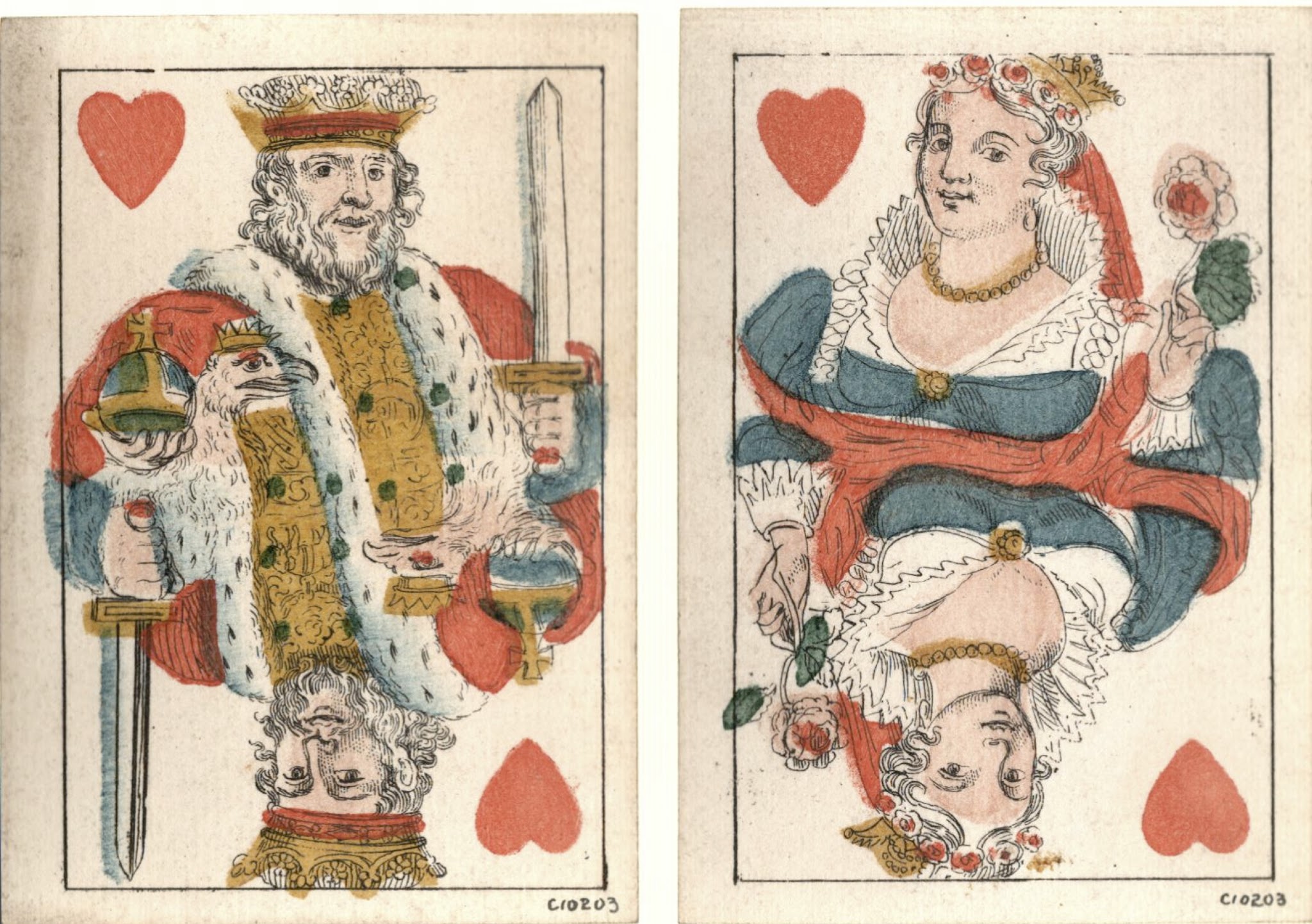 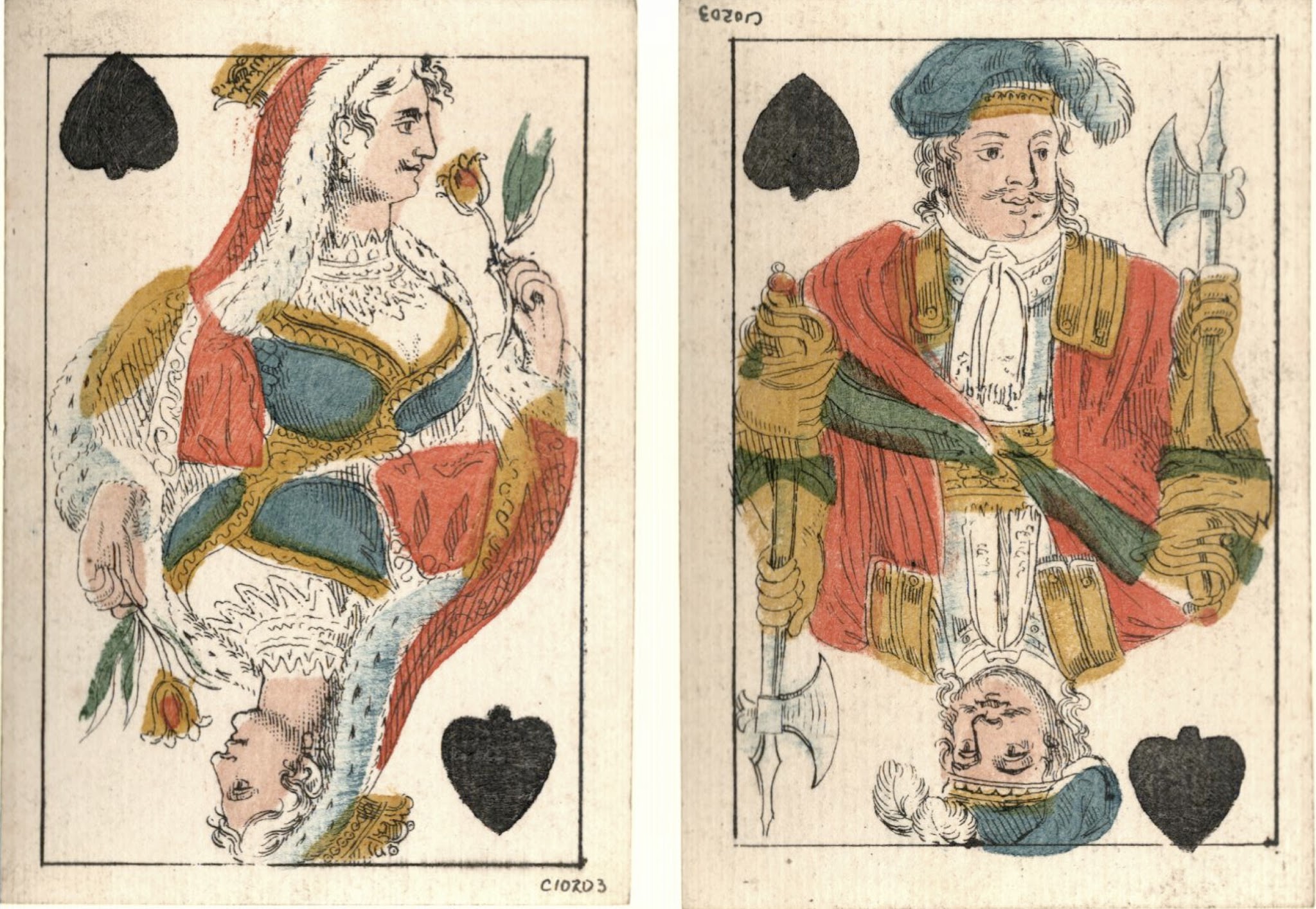 AN EXCURSUS ON TAKE-OVERS AND MERGERS

For a timeline presentation of English card-makers 1761-1905, see page 20. Below is a simple extraction from the data of the name changes, take-overs and mergers that occurred throughout the period. A question mark indicates uncertainty, where a take-over of the premises is involved.

In 1844 Woolley takes over Stopforth's address, though the latter ceased in 1838.