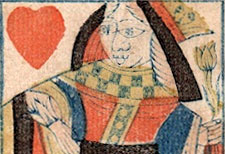 Mike Goodall's series of booklets on 19th century cardmakers has the wrong name: the makers are by no means all minor. It gives the impression that only Goodall and De La Rue were major players in what was at that time a changing industry. It's true that those two firms were the only two to survive into the 20th century (with the exception of Woolley and James English, who finished about 1904, and Reynolds, which was owned by Goodall anyway), but that has no particular significance in the developmental history of playing cards.

If we look at the figures of card production from 1824 (presented by Lawrence Alt in an IPCS Journal article from the 1826 report of the Commission of Enquiry into various kinds of taxation, including playing cards), we can see clearly who the big players were at the time. The following are the official figures for the major makers, first the number of packs for the home market and second that for exportation.

The other makers are small in comparison, though Whitaker has a reasonable export trade in 1855 (17%), but this dwindles over the six years in question to 2.8% by 1859 & 1860. The firm seems to have ceased in 1861 or 1862. It is clear from these figures that De La Rue is the biggest mover in the home market. He also gets an increasing share of the export trade, but not as much as Reynolds. Clearly, both Goodall and Reynolds have expanded tremendously in the 30 years since 1824, where they hardly featured at all. Bancks, on the other hand, is on the wane. When you compare the combined figures of Hall (& Bancks) and Hunt from the 1820s, the antecedents of Bancks, with those of the 1850s, the decline is very striking. Even between 1855 and 1860 the decline is obvious. Maybe the Bancks brothers had little interest in the playing card business they inherited. Production methods, which were static, and a lack of interest in developing back designs as a focus of marketing all suggest a lack of interest in development. Even though Reynolds' production methods were not as advanced as those of De La Rue and certainly the later Goodall, they at least introduced a range of decorative back designs and surfaces for improving play. Nevertheless, by the end of the 1870s both Bancks and Reynolds were well on the way out. Neither firm introduced round corners or corner indices; indexed cards by Reynolds & Co were manufactured by Goodall. After the end of the Old Frizzle period new makers, such as Willis, James English and a revived Woolley, came into the market, and their more up-to-date production methods also no doubt helped to put paid to the two other ailing companies. In 1860 the De La Rue archives give the total output as 294,000 (home) and 307,006 (export), but the reduction of the tax from 1/- to 3d gave a remarkable boost to output. However, the increase in output did not produce an increase in revenue for the Government, at least not immediately. In the last year of the shilling tax (1861-62) the home output was 272,300 packs, producing a revenue of £13,615, but in 1862-63 the home output increased substantially to 732,960, producing only £9,162, and in 1863-64 home output was 656020 packs, producing only £8,200/5/-. In 1866 De La Rue alone produced 299,468 packs. I don't have figures for the other makers. (It's interesting to compare these Victorian figures with the number of imported packs a hundred years later in 1966: 322,559 dozen packs!) In the 1872 Kelly's Post Office Directory the number of packs produced in 1871 is given: 37,294 dozen packs (447,528 home) and 35,004 dozen packs (420,048 export).

When you look at these figures, it is not surprising that so many of the cards of the major makers have survived. At different periods different makers were in the ascendant or on the decline; some really were minor producers. In general terms, however, we can give an idea of what should be considered the major manufacturers in England at different periods throughout the 19th century. Going further back into the 18th century, some of the major makers started then, even though they may have been taken over and changed their name. One of the biggest, Hunt, started with Blanchard, whose firm was taken over by Gibson in 1769 (and ran it with and without Gisborne); Hunt joined the firm as a partner in 1801, then took over in 1804. Hall took over the business of Llewellyn, probably the successor to McEvoy, in 1785; by 1820 it had been inherited by son and son-in-law, Hall & Bancks, who were in turn uncle and father of the Bancks brothers. By 1840 the firms of Hunt and Hall & Bancks had amalgamated, though probably produced cards under both names until the end of the decade. In 1849 the first Bancks Brothers Old Frizzle was produced and took over from the other two names. So, in the early part of the 19th century we can say that the major makers were: Hunt, Hall (& Bancks), Hardy and Creswick (from 1820). By the 1850s, as we have already seen, the front-runners had changed: De La Rue, Reynolds and Goodall, with a declining Bancks. After 1862 Goodall makes enormous strides into the market and it and De La Rue are the clear leaders until the end of the century, by which time they are virtually the only remaining makers

To start with, a couple of fairly early examples: McEvoy seems to have been taken over by Llewellyn, who in his turn was taken over by Hall. The outlines of these courts are in black, whereas in later packs blue became the norm. 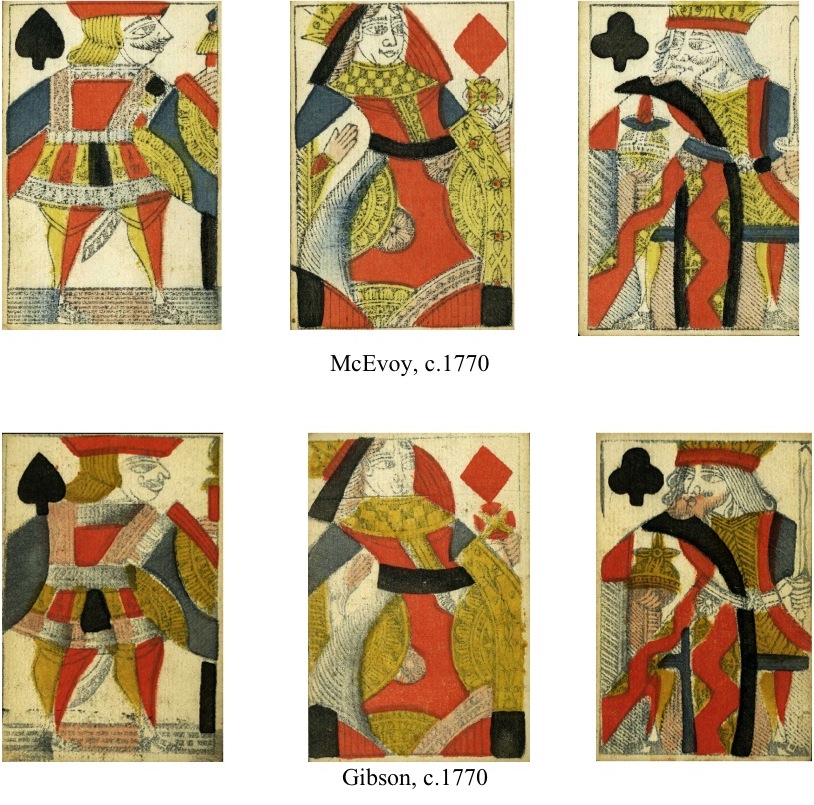 The above pack is a very early Gibson pack with characteristics that eventually disappeared from the design, e.g. the sleeve beyond the edge of the design on the JS and the jutting-out jaw of the KC. Gibson, however, was to become a major maker of the late 18th century. I start with an early example from the Coming Museum collection.

For a list of the examples in my collection of the cards produced by Blanchard, Gibson, Hunt and Bancks Brothers, click here► 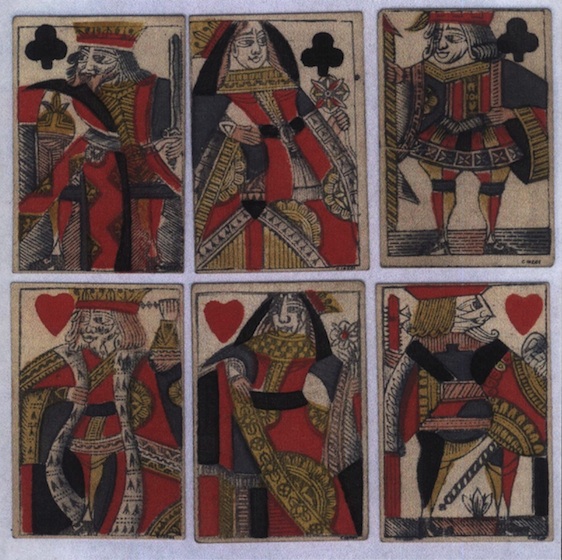 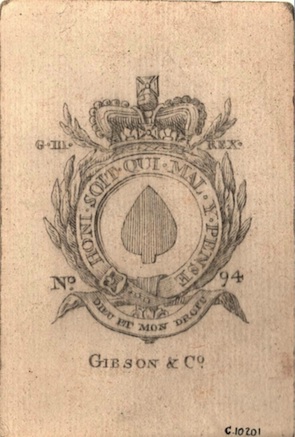 Above two images: an early Gibson & Co pack (from the Cuming Museum) 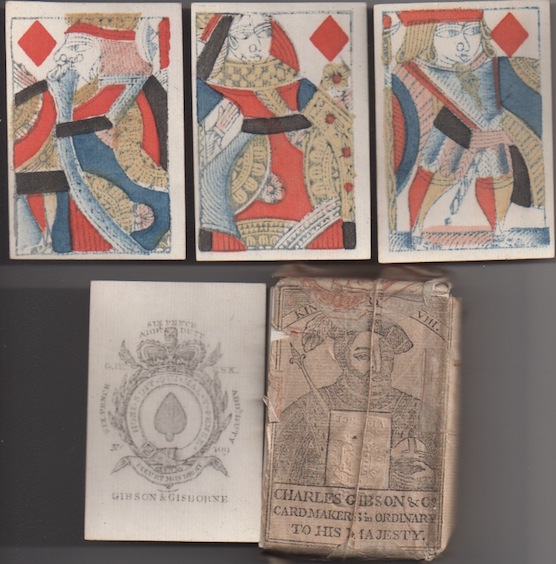 The later Gibson packs were sometimes like those of Hall, but he produced more of the type adopted later by Hunt after the merger. 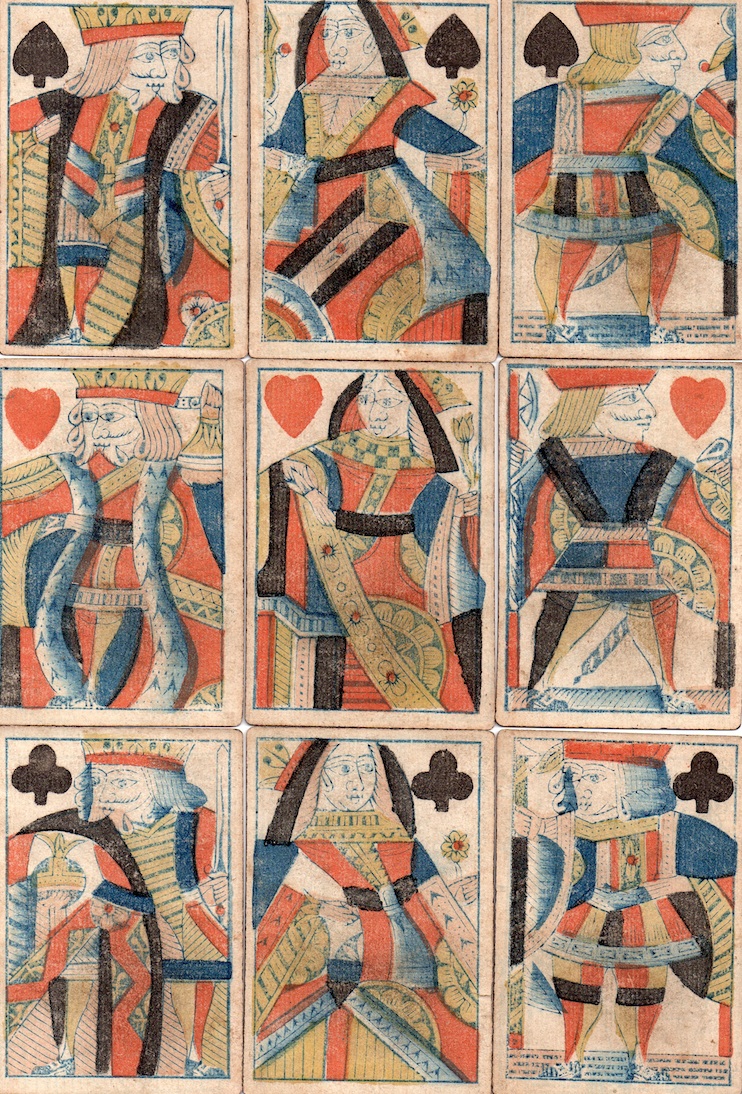 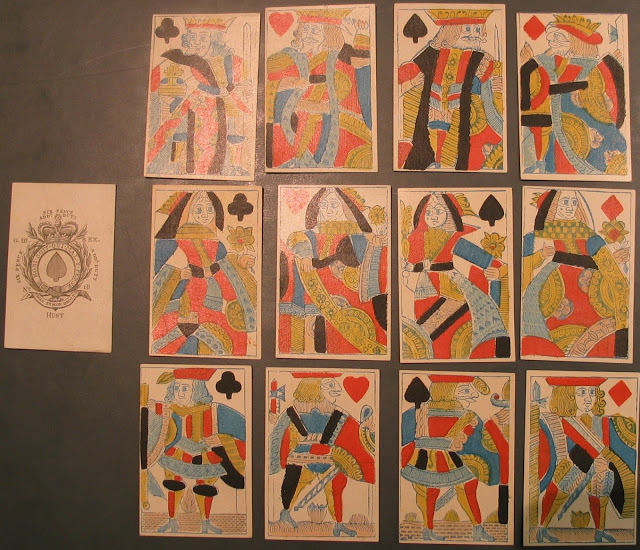 Above: an early Hunt pack with Blanchard courts, presumably old stock from the original maker (from the Victoria & Albert Museum).

Hunt also used courts of the Hall type in the early years of his independent operation. 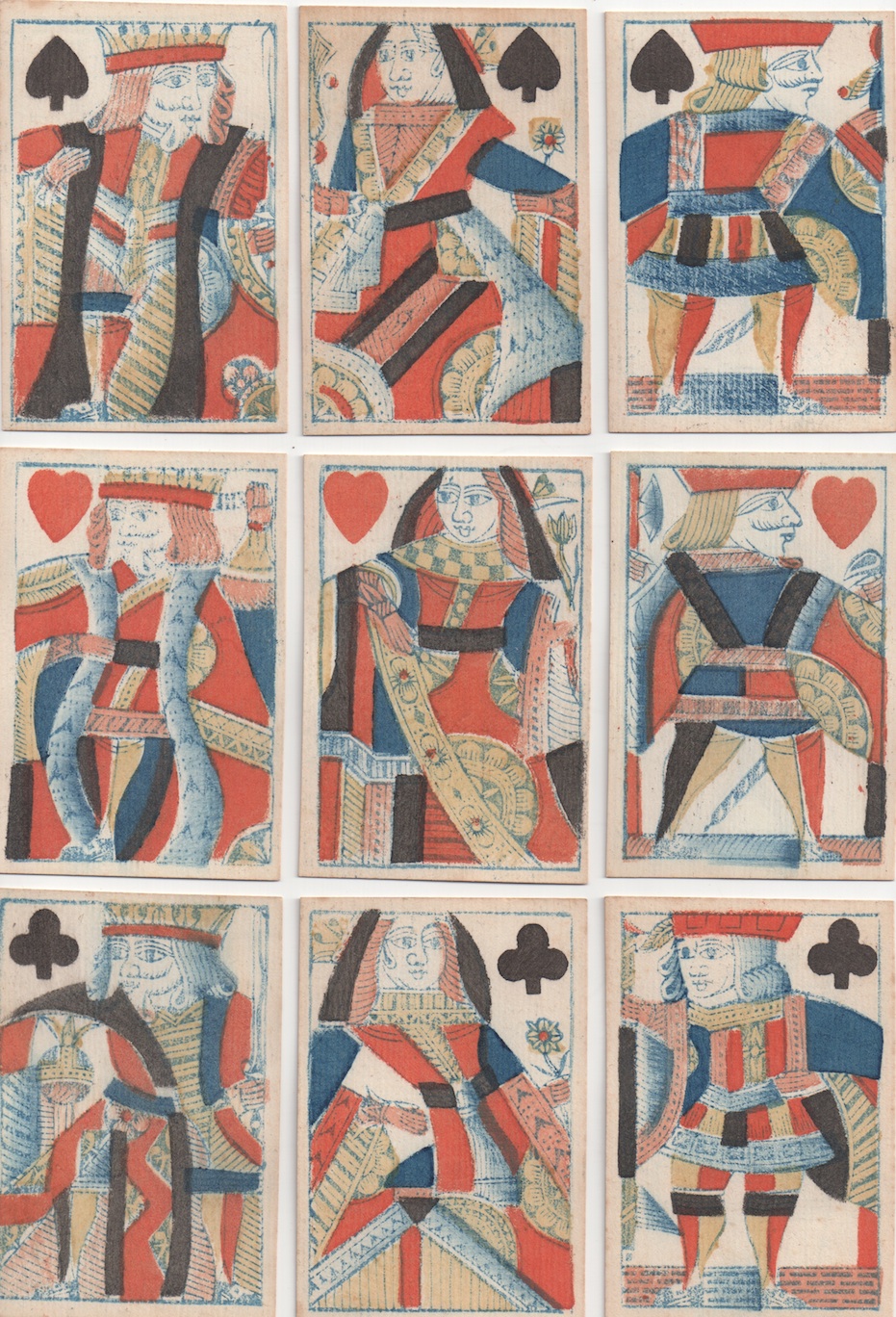 Above: early Hunt, c.1797; note the QH's tulip and extra red on the JC, as in the Gibson pack above. 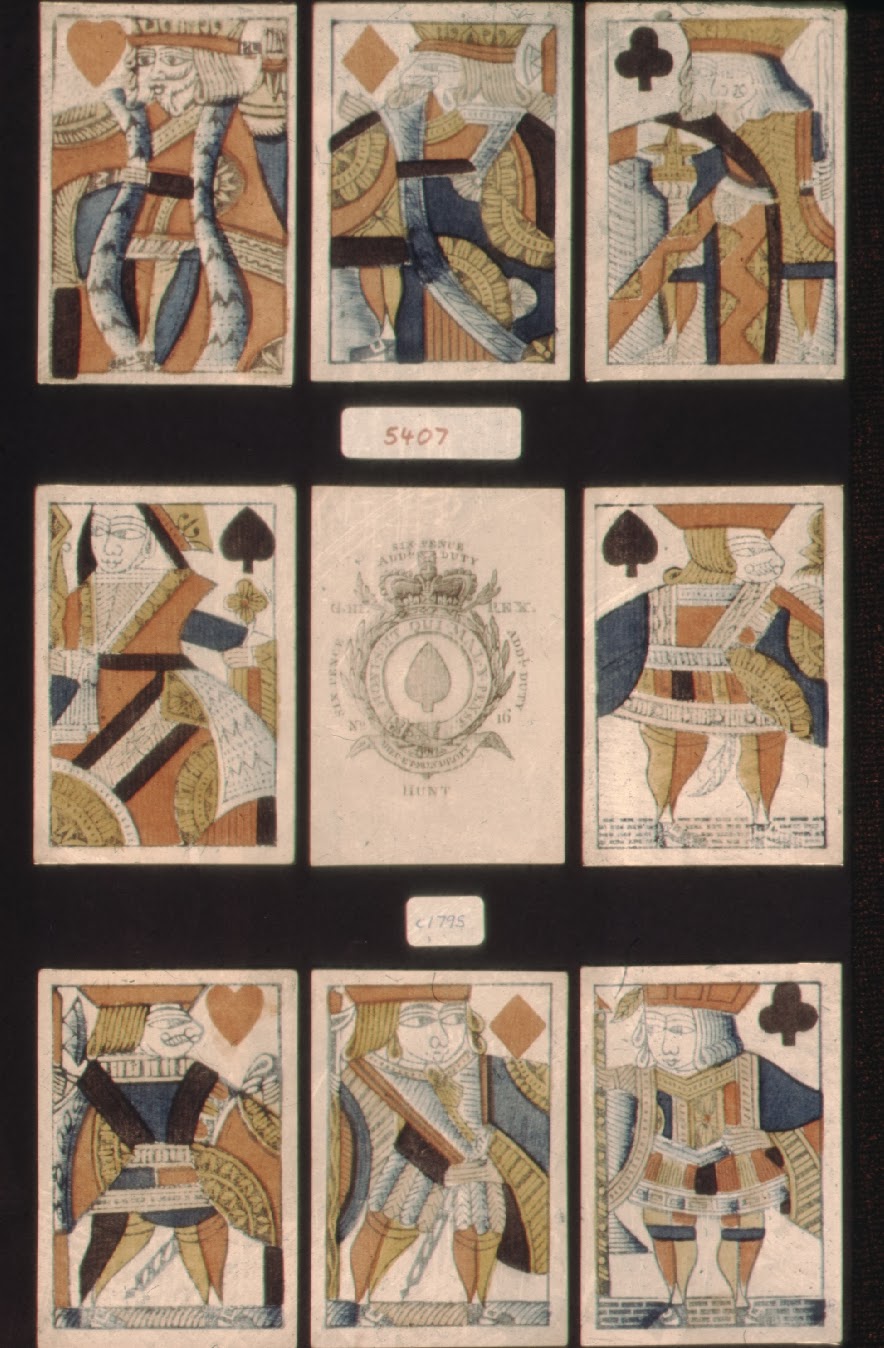 Another early pack, but with the more usual later courts by Hunt, c.1795, from Sylvia Mann's collection. Note that the KH is of the Hall type; as the outline is black rather than blue, it is probably not original. 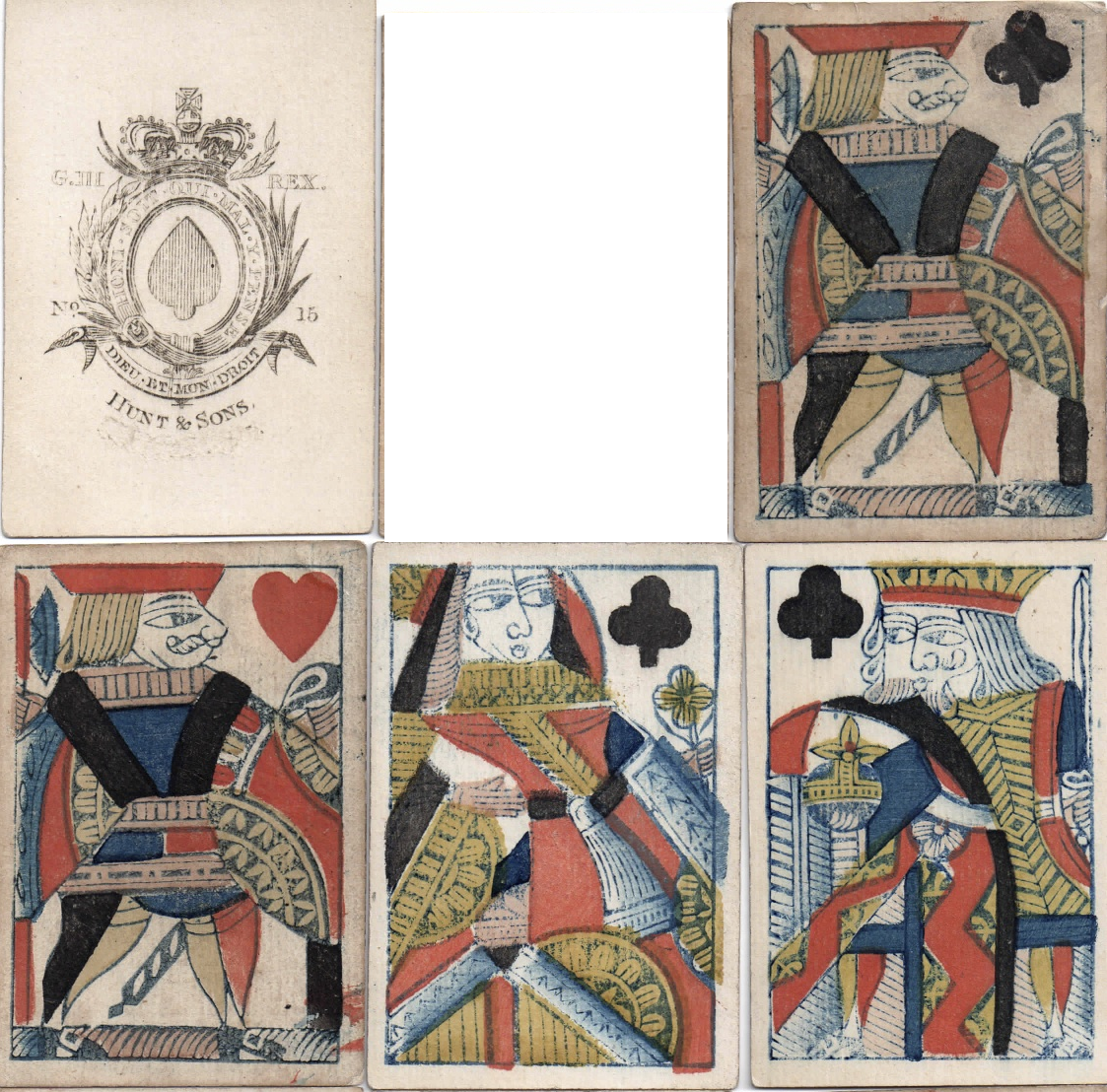 A Hunt pack with 'Exportation' scratched off the AS (a tax dodge) and the JC made from a spare JH, no doubt a second-hand pack.

Hunt was one of the first makers to redraw their courts and update the images around 1820. 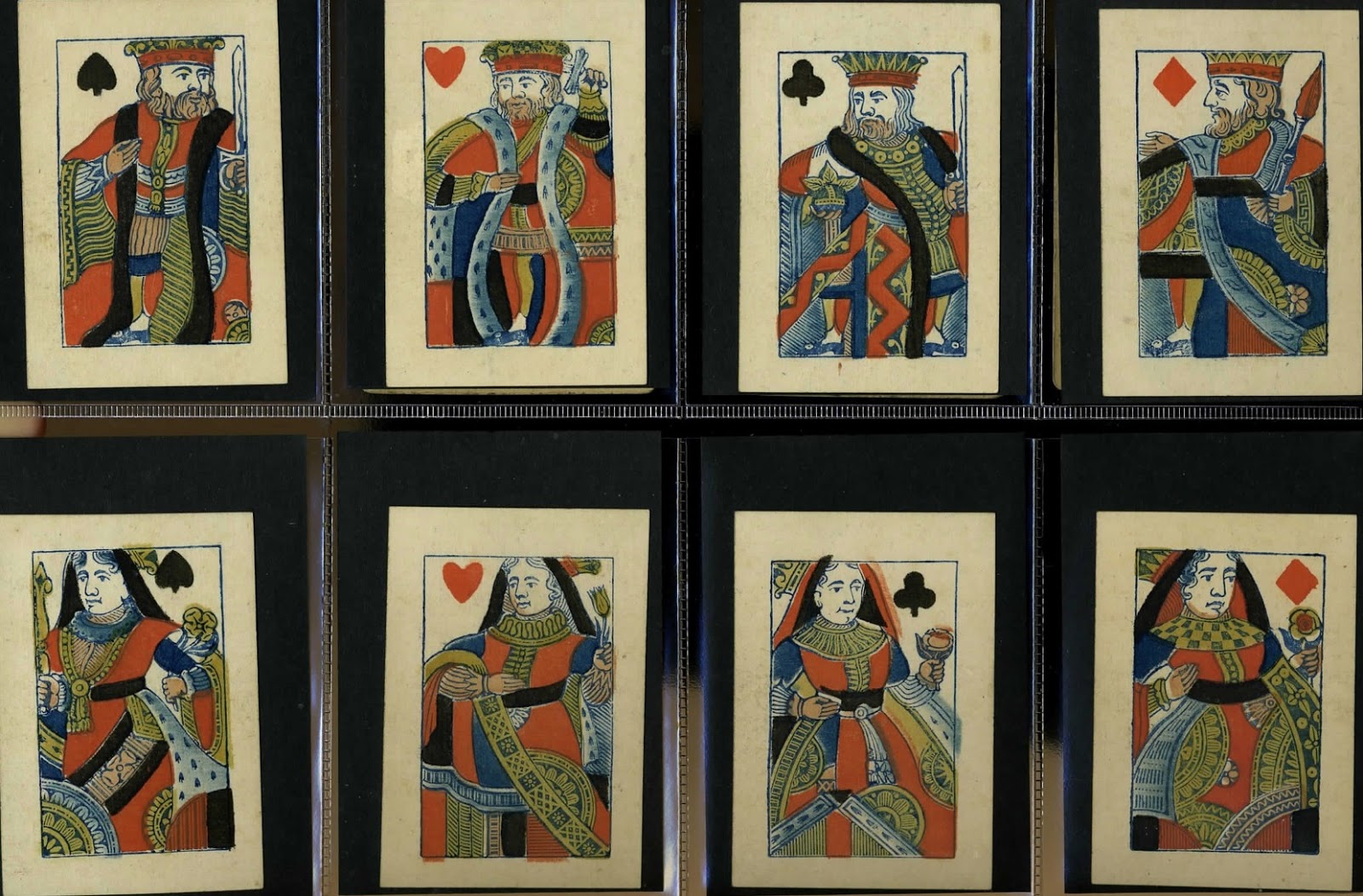 HB5 is an unusual version of standard courts, also found with Stopforth ASs.

Hunt seems to have developed further the idea of smaller cards, as those above, which most other makers only produced in piquet cards. They also produced smaller cards with full-size courts of a traditional kind (HB3).

For later examples of Hunt packs with the redrawn courts, such as those below, see the Plainbacks website and my contribution to it. 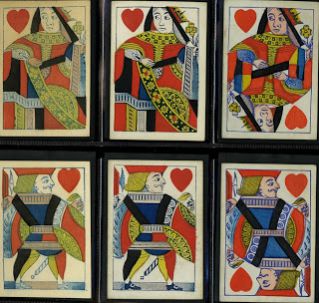 Although HB1.1 is common in packs by Bancks, there is a pack on the Plainbacks website with these courts and a Hunt Old Frizzle, which suggests that the first versions of their double-headed cards appeared around 1850. How long it took to use up all the many Hunt Old Frizzles is anybody's guess, but the first Bancks Frizzle was issued in 1849.