I want to present a simplified version of the classification system of woodblock cards that Paul Bostock and I worked out a few years ago. Although the minute details may be of relevance in some cases, I have tried to reduce the characteristics of both the blocks and the stencils to give a reliable way of attributing court cards to a particular maker. It has to be borne in mind that many actual examples of packs are mixed as part of the recycling of secondhand cards (legally or otherwise) and sorting them into the makers who made the constituent cards is something that this classification is an attempt to help with. There are even examples of 51 cards by one maker and the AS by another.

The first and easiest analysis is into eye type. There are three, as follows:

Type I: the eye-balls are filled in from the corner to a straight line

Type II: the eye-balls are round in the centre of the eye or at the edge in the profile courts

These were the first types to develop after the end of the Blanchard era (roughly 1780 onwards); I exemplify below a pack of this earlier type. 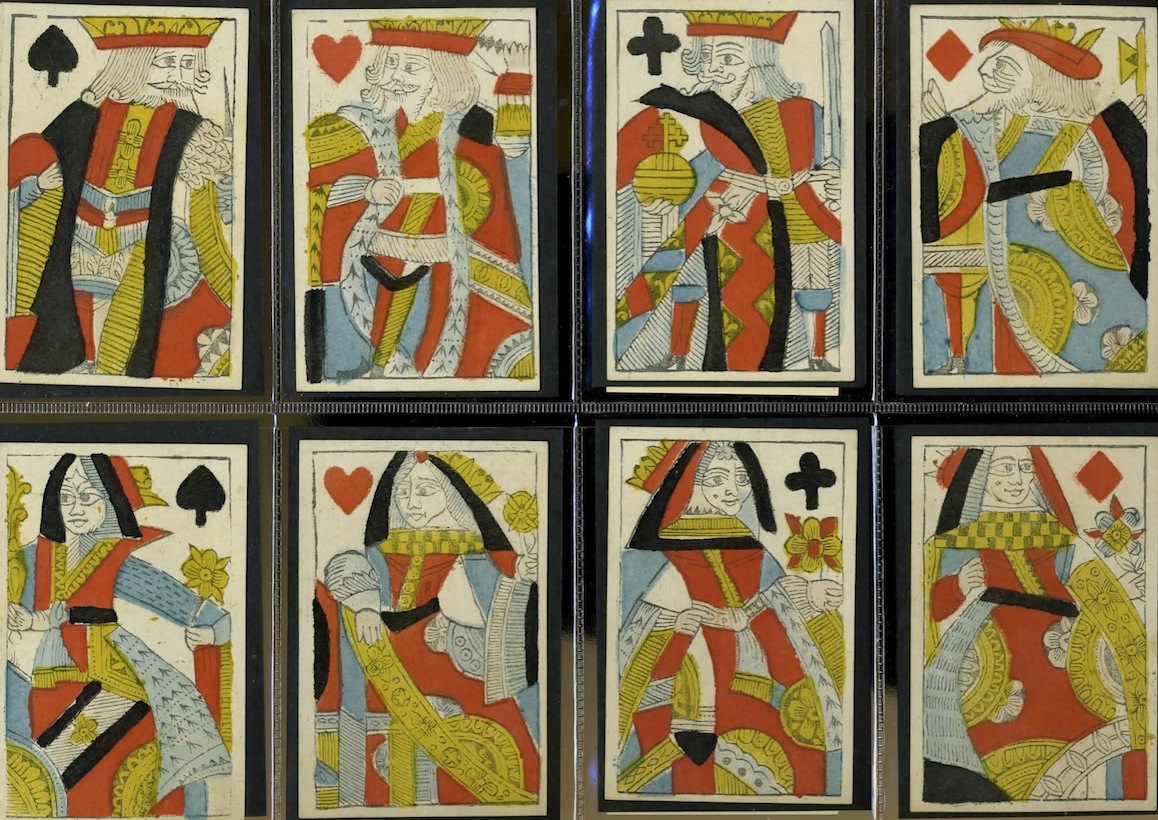 Types I & II were the main designs used from c.1780-1820. Towards the end of this period card-makers were beginning to modernize their courts and many of the makers had in-house designs to replace the older ones, which were shared across several makers. Two further versions of the wood-block courts appeared around 1820. One was shared by a number of makers: Type III.

The fourth and final type is really an in-house design belonging to Creswick, so I have designated it as CR1.

Creswick CR1: all eyes in profile with round eye-balls

The odd thing about Creswick packs is that he doesn't seem to have redrawn any red jacks: they are either of Type II or Type III. 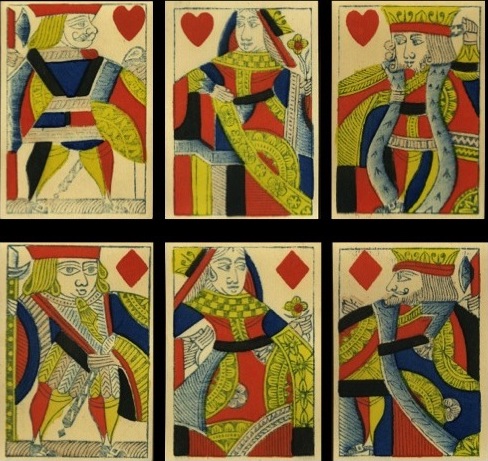 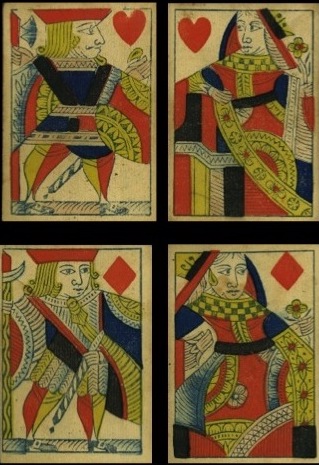 Although I have attributed this design to Creswick, I have recently acquired an interesting pack with CR1 courts with different colouring, Hall Type II red jacks and a Hall & Bancks Old Frizzle, which I find hard to explain (see page 53).

As a first exemplification of the analysis of the outline block and the colour distribution, I'll take the KS. 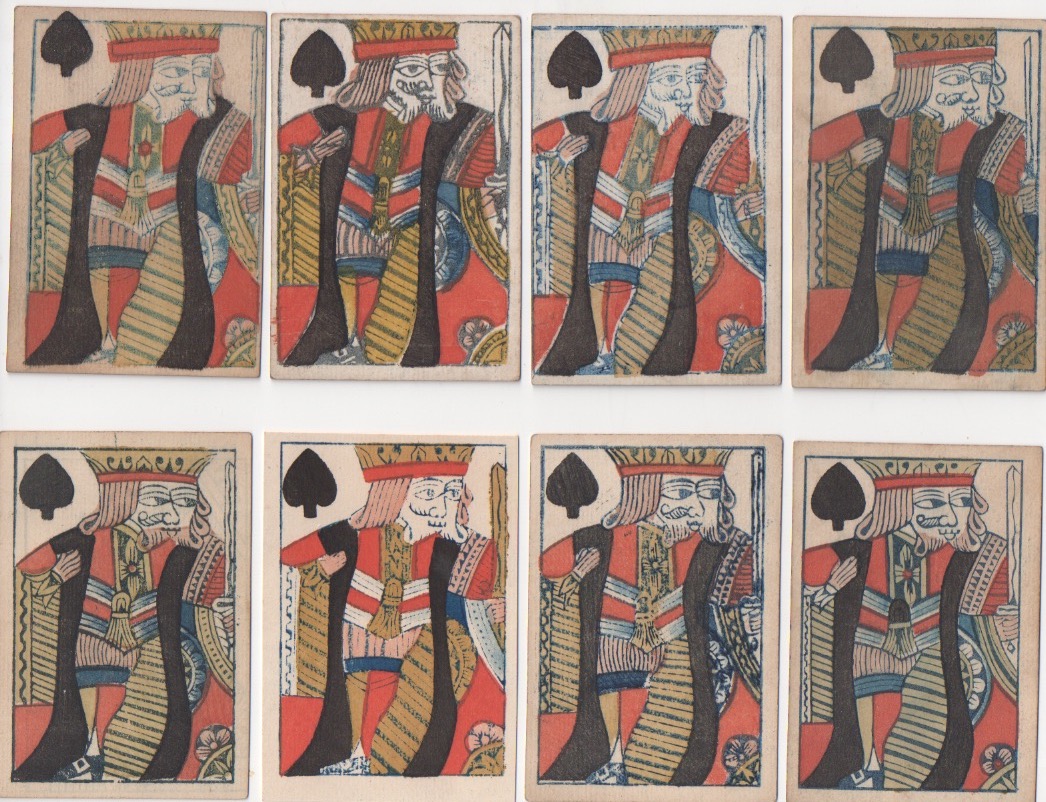 The characteristics I have used to arrive at these designations are as follows:

KS2 has cheek shading rather than a moustache; he is only found with Type II eyes; KS2a has the twig-like design found in KS3; KS2b has dots on his sleeve on the right.

KS3 has a wavy twig-like design on his sleeve on the right (= his left) (see KS2a for the same design with Type II eyes).

These designations cover 40 of my wood-block packs; there are some further variations, but they don't add anything to the basic distinctions. For example, Stone, Hall and Creswick all produced packs with elongated faces and Type II eyes, but the KS can still be aligned with one of the six types given above. In the Hall pack below the faces are all elongated, but the KS fits the profile of KS2 with Type II eyes and cheek shading. 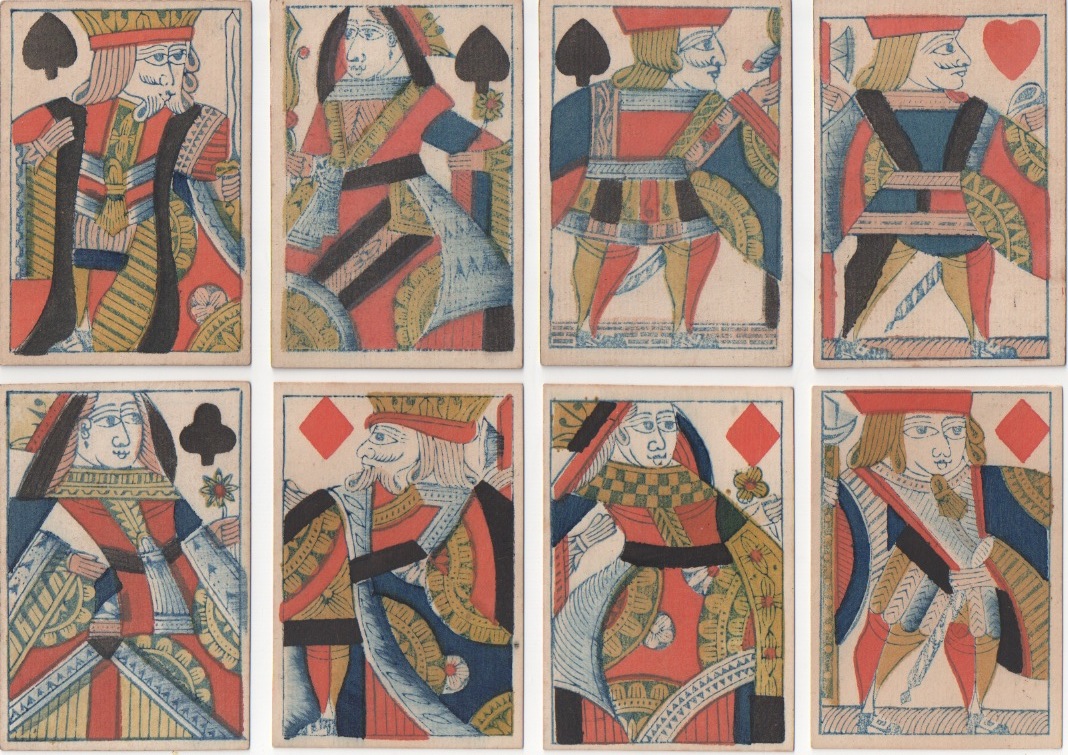 QS1 has yellow/red/yellow (Y/R/Y) on her sleeve on the right and her arm is lower than her shoulder; with Type I eyes her belt is horizontal, her head-dress on the left is all black and her sleeve is blue up to her flower and either black or white above her hand. With Type II eyes her belt is sloping, her head-dress is black and red and her sleeve is all blue; in variant QS1a her bodice is blue on the left. Except for QS1a, which always has Type II eyes, QS1 can have either eye type. 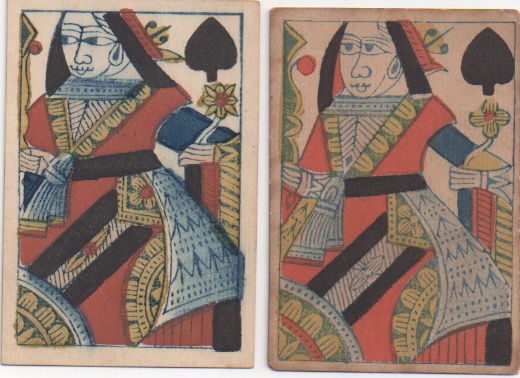 QS3 has a sloping belt and black (Bk)/R/Y on her sleeve; she has blue and black on her upper sleeve, or it is all blue; her head-dress is black on the left. Type I eyes, and as far as I can tell, only used by Hardy.

QS4 has a long face (see the examples by Hall above), B/R/Y on her sleeve and her upper sleeve is blue and yellow; her head-dress is black and red on the left. Used by Stone and Creswick. Note that the long-faced QS in the court set with elongated faces above is QS2. 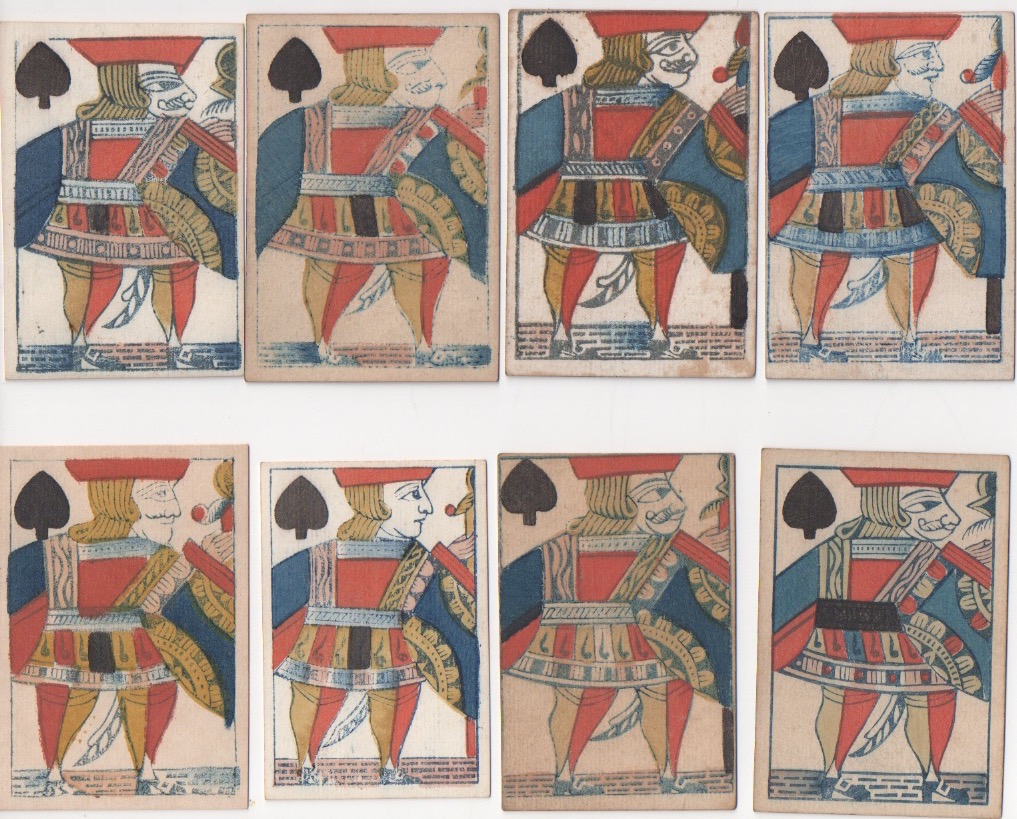 JS2 has Type II eyes, a moustache and a pike with a base, his sleeve edge is above the level of his shoulder and it is flat at the bottom, his sleeve at the left is blue and red. The top of his sleeve has small circles. His tunic s coloured Y/Bk/Y/R/Y/Bk. JS2a is the same except that he has cheek shading and no circles on his sleeve. Both examples from Hall; the flat bottomed sleeve is replaced by a curved one in later examples. JS2b (by Stone) has an elongated face and no base to his pike. He has the tunic colouring of JS1a: Y/R/Y/Bk/Y/R. His leg at the left is coloured R/Y rather than the usual Y/R, which appears in other examples by Stone. JS2c is a one-off in a piquet-sized pack by Hall & Bancks. He is like JS2a but with the tunic colouring of JS1a and no moustache or shading.

JS3 is a mixture of the two types we've seen so far. He has Type I eyes and is like JS1a except that he has blue and red on his sleeve at the left and a base to his attribute. This example from T. Wheeler seems to have had the black on his tunic missed off in the stencilling process. JS3a is an odd example from Fuller (from the same pack as KS6) with the staff of his attribute completely missing and blue instead of black on his tunic (see the Hunt example of JS1 above). There are other Fuller packs with the usual black on the tunic and his sleeve in line with his shoulder (JS3b, not illustrated).