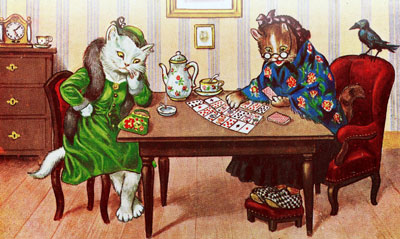 The art of interpreting divine omens - augury - has since ancient times formed the bedrock of political, civic and religious life. Cartomancy and modern esoteric tarot packs have been conjured in a wide variety of conceptions. They involve use of imagination and intuition to assess one’s own thoughts and feelings from the view point of the symbolic images. This is finding meaning and answers for oneself, rather than having blind faith in religious authority.

Tarot, originally a 15th century card game, has evolved into a system of personal mysticism and spirituality   more►

In this version an explanatory verse is printed at the top of each card.

“Encyclopedic Tarot” by C. L. Wüst with “bourgeois” views of life on the Trumps