In 19th century England there were a number of makers who produced cards in relatively small quantities. There are also a number of instances where it is difficult to know how long a particular maker operated; this is partly because some makers had more important manufacturing outputs or business interests. For example, Creswick (see page 32) was a stationer and Turnbull made all kinds of board for artistic purposes (see the wopc main website). Also, some makers gave up making playing cards and went into another related business, e.g. pasteboard making. So, if a firm continued over a considerable period, it's not always clear when the card-making activity occurred. The dates, as far as I can determine them, can be found on the timeline on page 20. For a list of my wood-block cards by some of these makers click here►

Active 1809-52, Garter AS issued August, 1808, Old Frizzle in 1828. Besides the non-standard Imperial Royal Cards (see wopc main website), they produced a few standard packs over the years. They were mostly of the normal Type I, though there is an unusually coloured one from the Old Frizzle period. The QS and QH are particularly noteworthy in having one eye of Type I and the other of Type II! 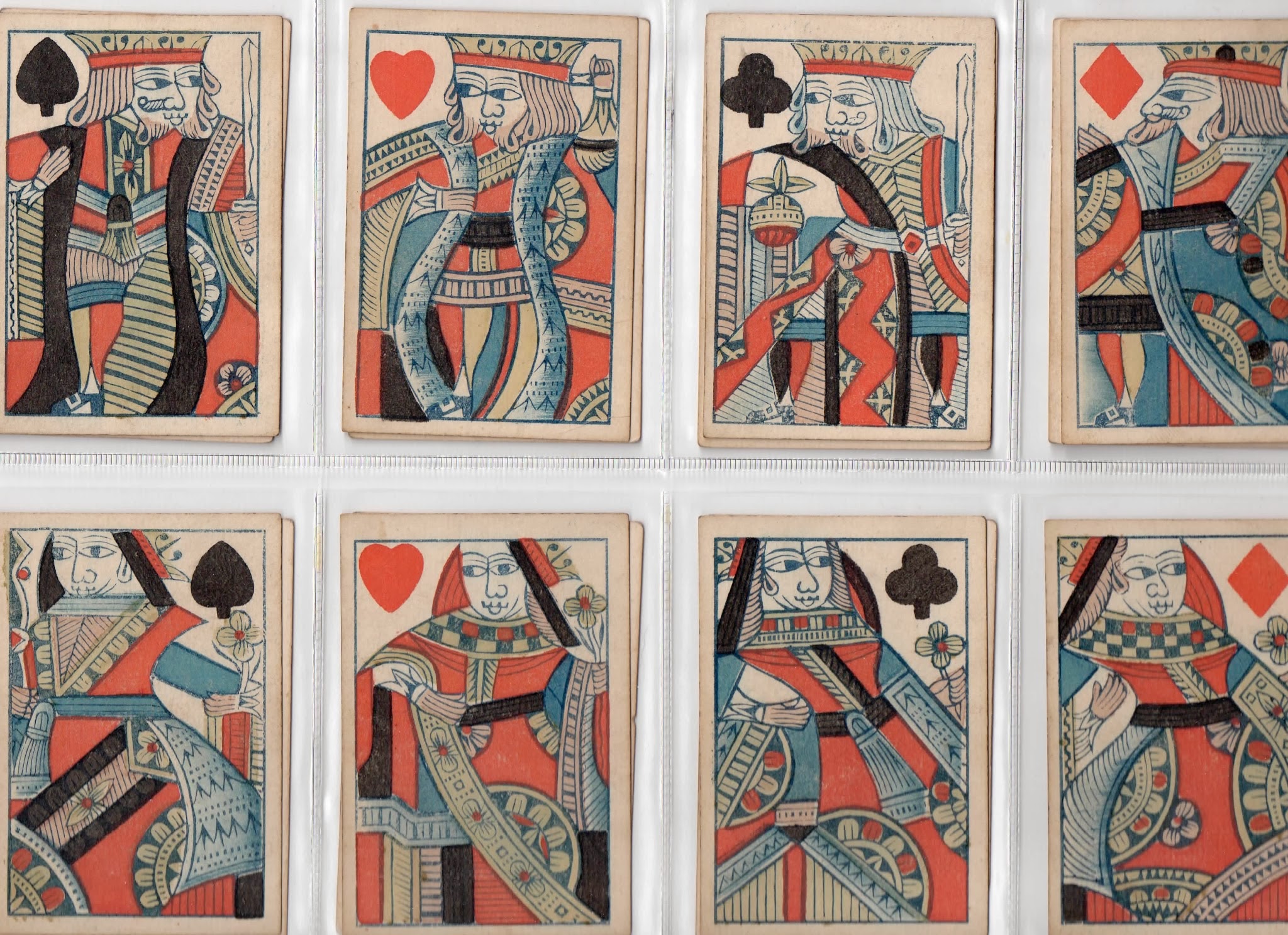 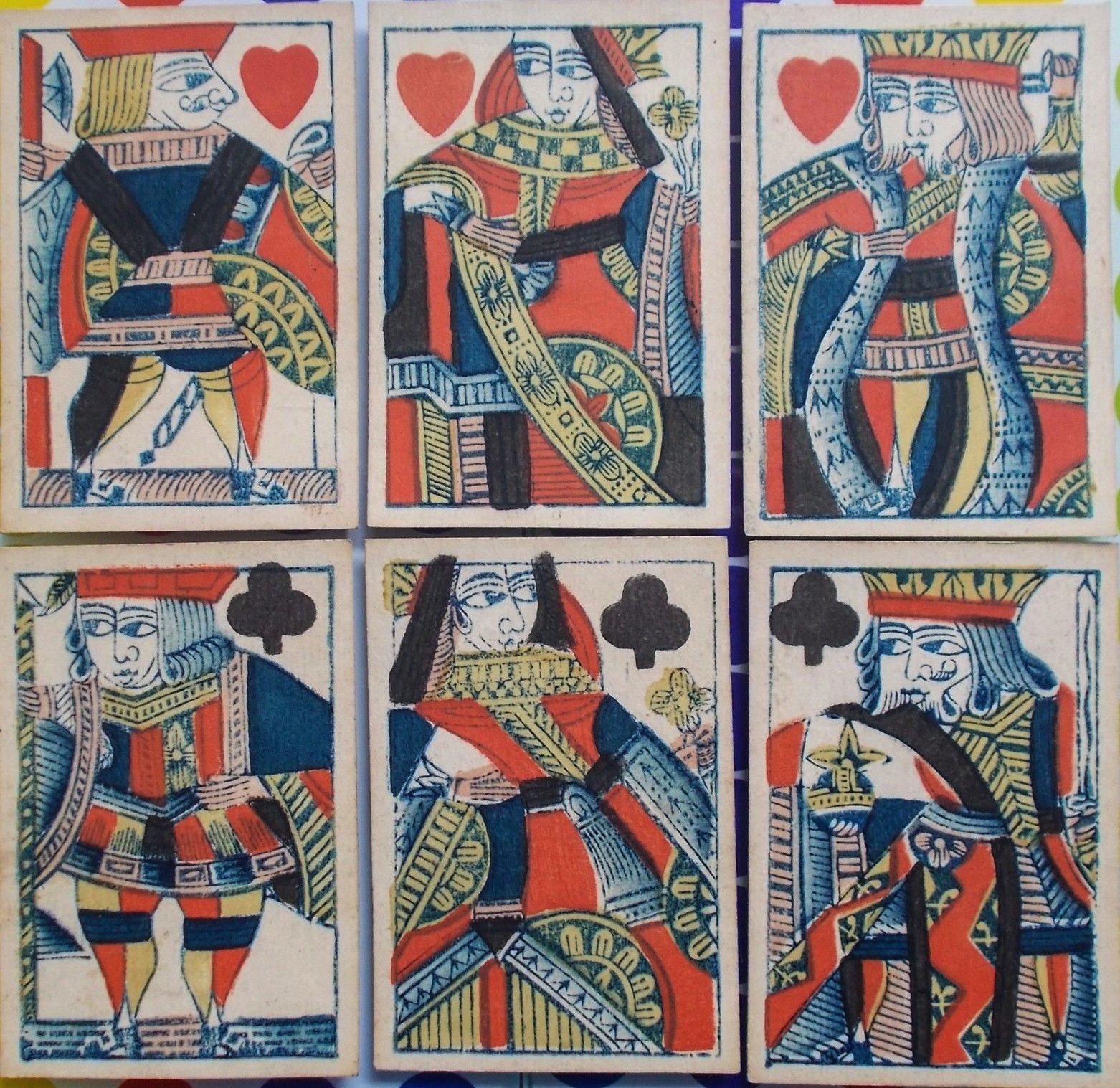 An 18th century maker who disappears for a while and then comes back (presumably the same man), only to go bankrupt in 1799. The odd thing about Hart is that a lot of packs appear with his ASs, even in the United States, so maybe his surplus aces were distributed (or sold illegally after he finished trading) all over the place. Many of the Hart packs on the plainbacks website do not seem to be genuine. Here is a genuine one, though, from c.1768 (A25). 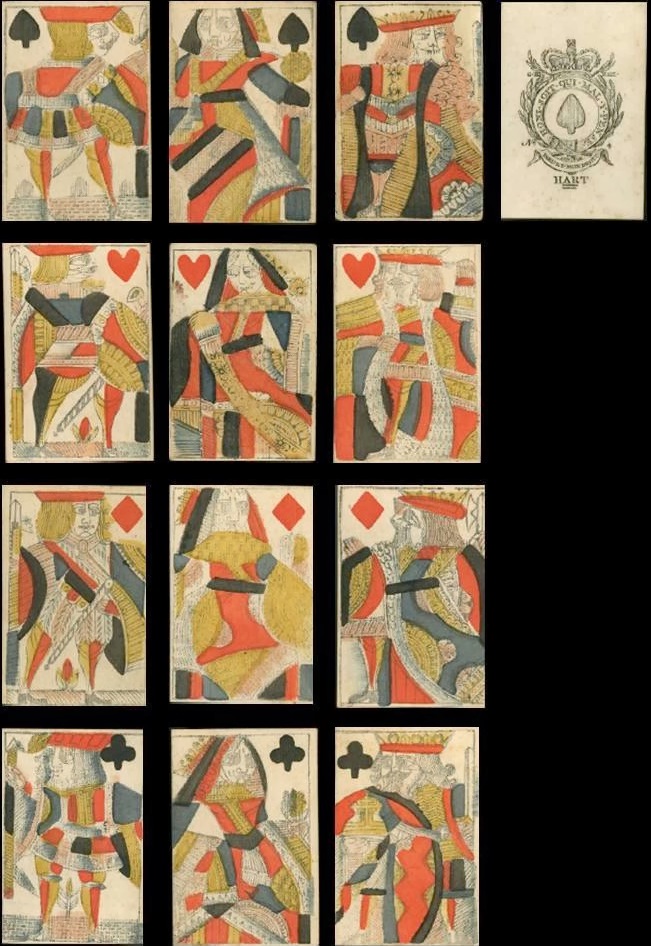 The ones discussed on page 39 from the plainbacks website, though, do not look like genuine Hart packs, even though the ASs look genuine.

1801 is the date of his first Garter AS; the firm became Stopforth & Son in 1824, and is listed as Ann Stopforth in 1838, after which date the firm disappears. Originally he was foreman to Gibson, and this is specified on some of his early Garter Aces. He used both types of court (I and II), though in the later Old Frizzle period he produced cards with Type III courts as well, like those of Reynolds. 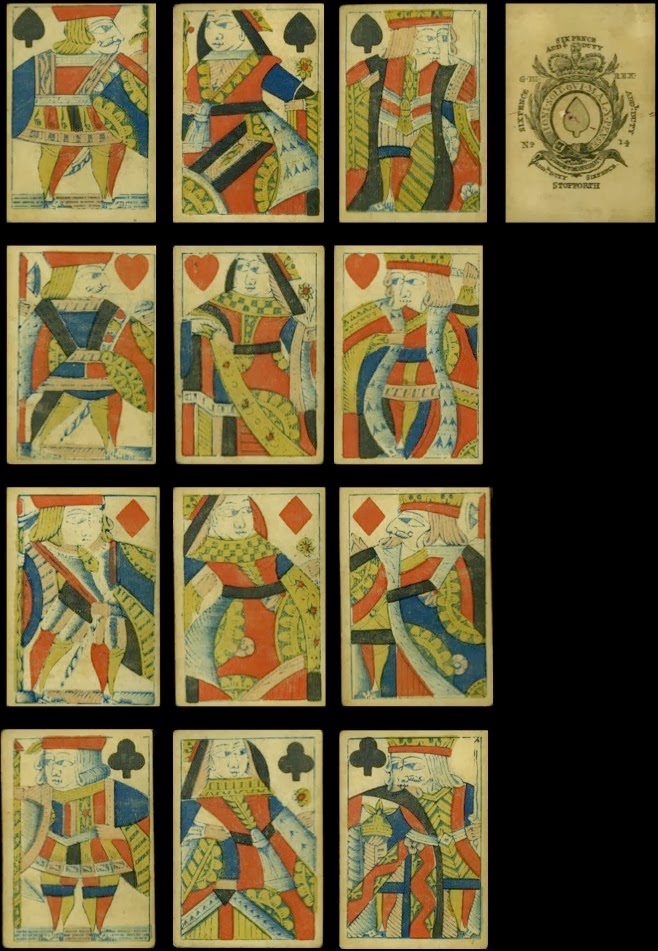 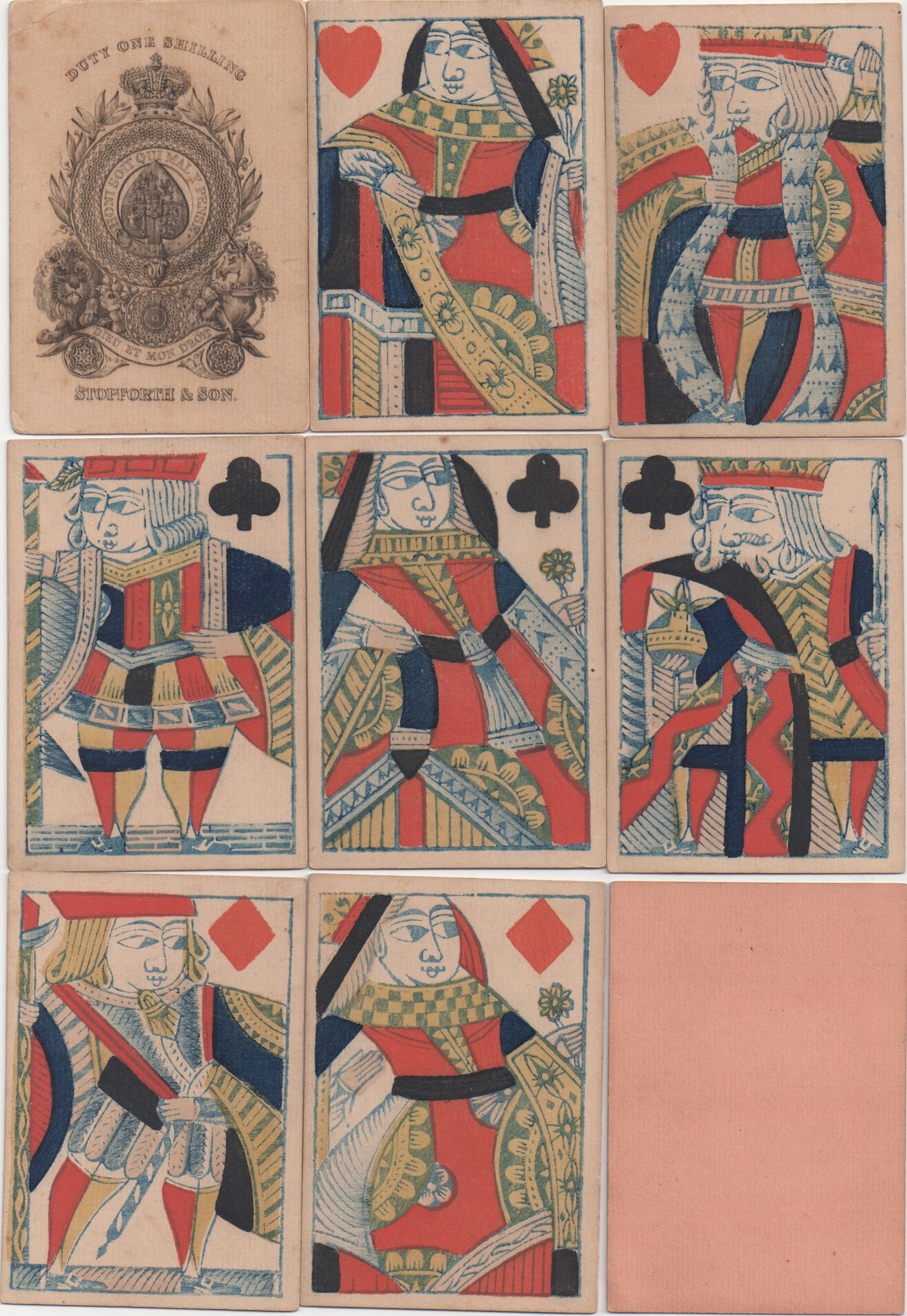 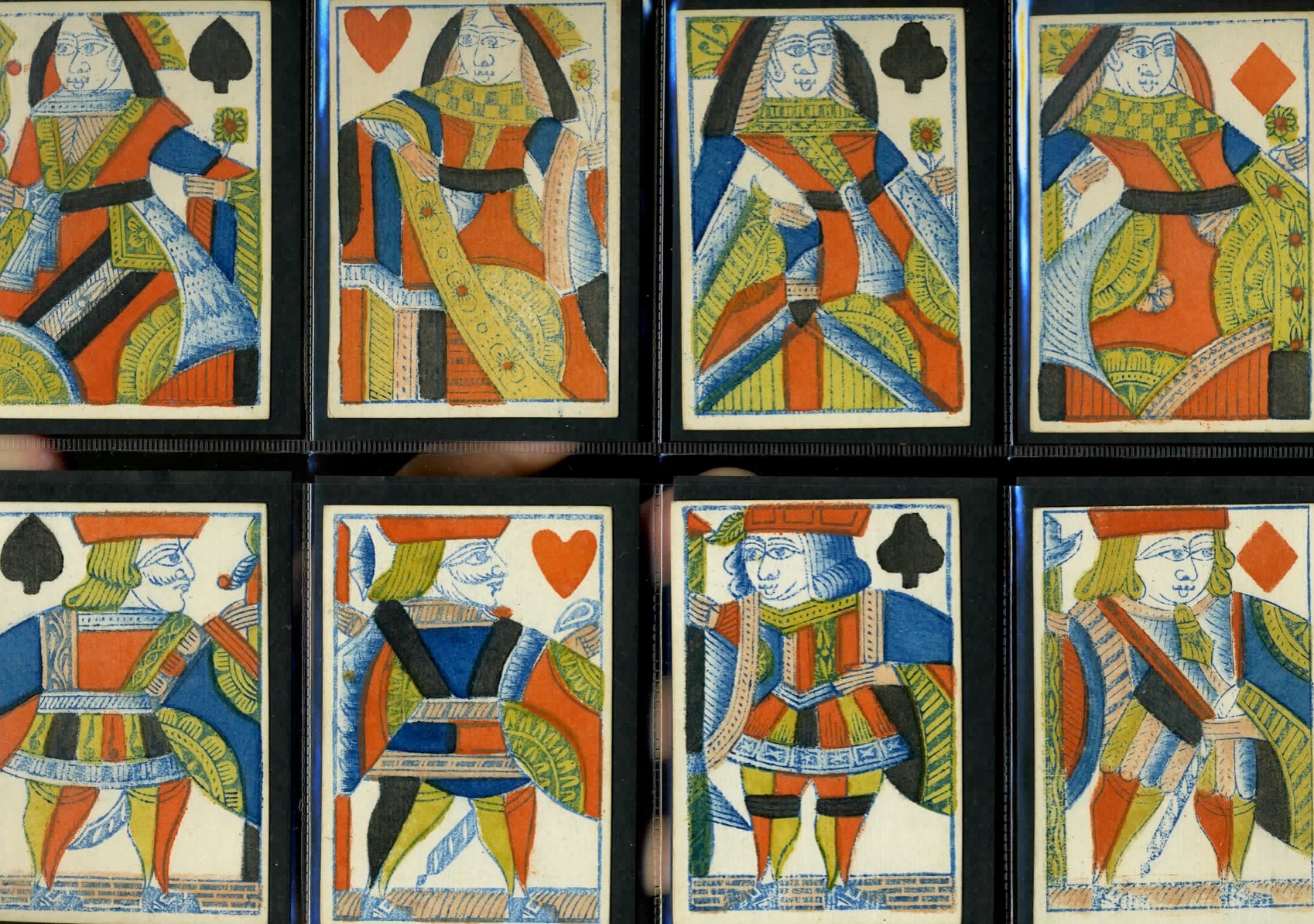 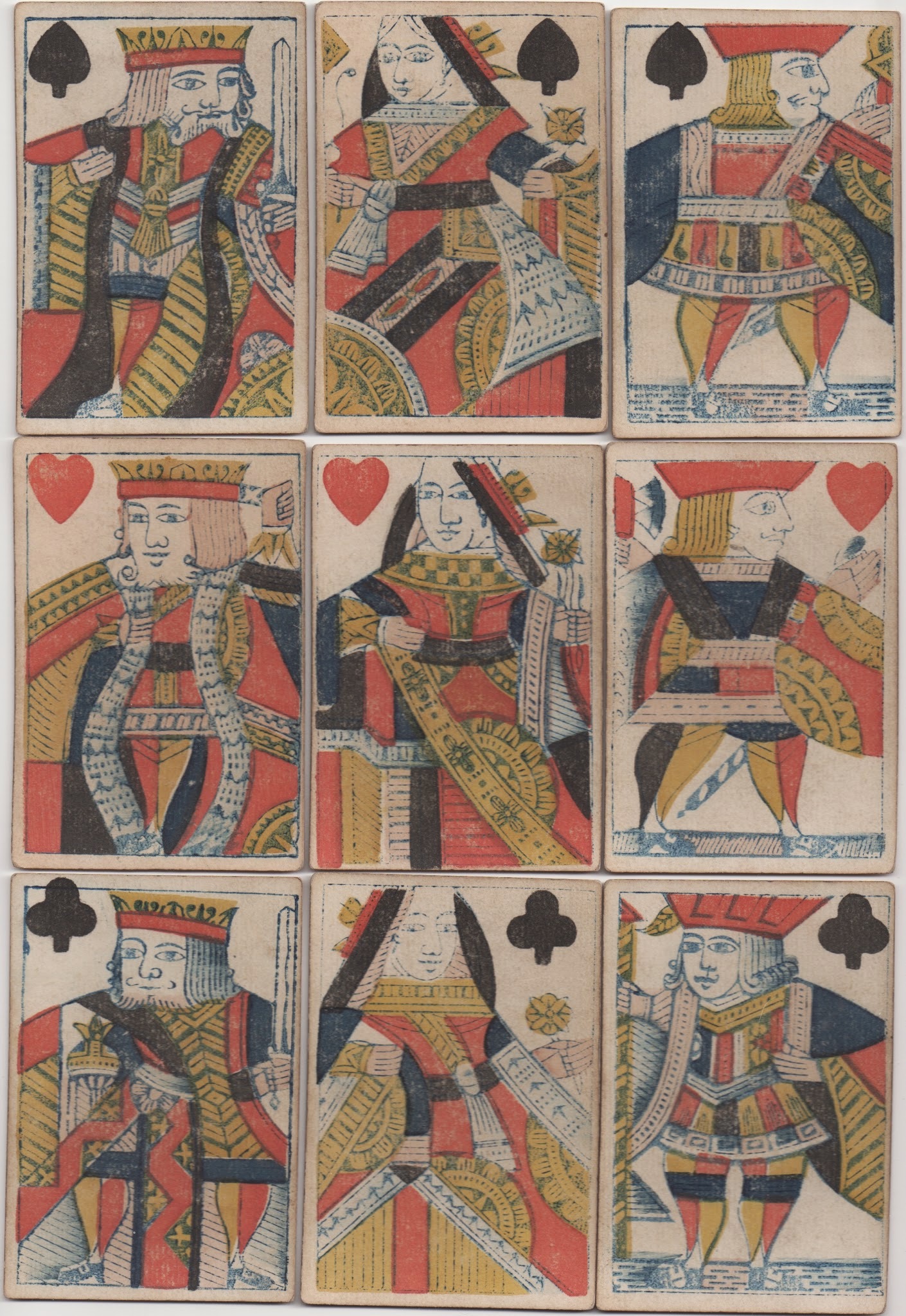 He also produced a pack using Hunt's HB5 courts (see page 30) with his own AS. Whether he was the first to use these blocks I don't know.

Stopforth and Son are also credited with engraving two packs for Charles Hodges, the Geographical Cards of c.1827 and the Astrophilogeon astronomical game of 1828. (See wopc website).

A rather obscure maker, who is not listed in the Post Office directories of the period. His first AS is listed in 1812 with a recut in 1820. His address is given as 10, Belle Sauvage Yard. He is still listed as a card-maker in 1825 in the Government report on taxation, but there is a reference to large numbers of his aces being returned or reassigned to Creswick, which suggests the business was on the wane. 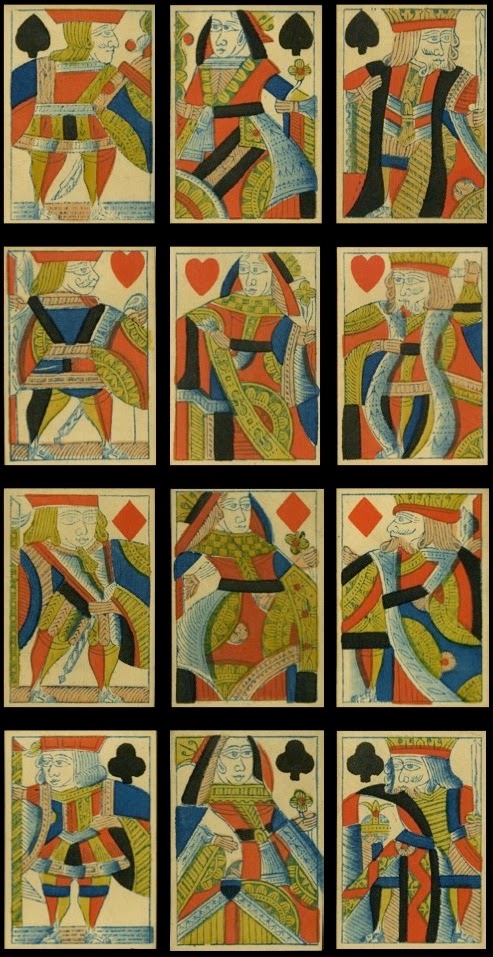 These courts, with their elongated features and large, Type II eyes, were taken over by Creswick and are sometimes used by Hall. In 1841 an E.J. Stone appears at the same Belle Sauvage address, but what relationship this firm might have had with the earlier one is impossible to say. Equally unclear as regards relatedness are the later firms listed under card-makers (with all the ambiguity that implies): Stone, Watson & Co. (1869-73) at 6-8 Fulwood's Rents, and Stone, Langdon & Stone (1875-6) at the same address. These are just a few of the unsolved mysteries of this period.

They were partners, certainly from 1827 until 1840. Robert Whit(t)aker spelled his name variously with one or two ts. Their address was 13-15 Little Britain. Whereas a street still exists with this name along one side of St Bartholomew's Hospital, there is no sign of Victorian buildings anymore: they have been replaced by modern office blocks.

Brotherton's name appears on the Garter ASs, whereas Whitaker's appears on Old Frizzle, though he also used a lot of unappropriated aces. Brotherton's dates are given as 1789-1840 according to Maxted's book on The London book trades (1977). Although Whitaker's factory was burned down in 1851, the year he exhibited his cards at the Great Exhibition, he continued to produce cards until 1858. This date comes from a hand-written list of playing card production found in the De La Rue archives by Mike Goodall. There is no entry for the maker for 1859, and I have never seen a post-Frizzle AS with his name on it. However, from 1859-61 John Brotherton Whitaker is listed in the London Post Office directory at 13-14 Little Britain, and in 1862-63 Joseph Cooper Whitaker appears at 14 Little Britain. These must have been surviving family members right at the end of the production period. The original Robert Whitaker was born in 1786, making him 65 at the time of the 1851 census, in which he is listed as a card-maker. Another Robert Whitaker, probably his son, is listed in the same census as a card-maker workman, who was born in 1826. It is likely that he took over the business some time during the 1850s, but that is not mentioned anywhere.

The earliest Brotherton pack I've seen is in the Cuming Museum, London, and dates to c.1792. It has a wrapper with it, too. The courts are an early version of Type I with a black outline. 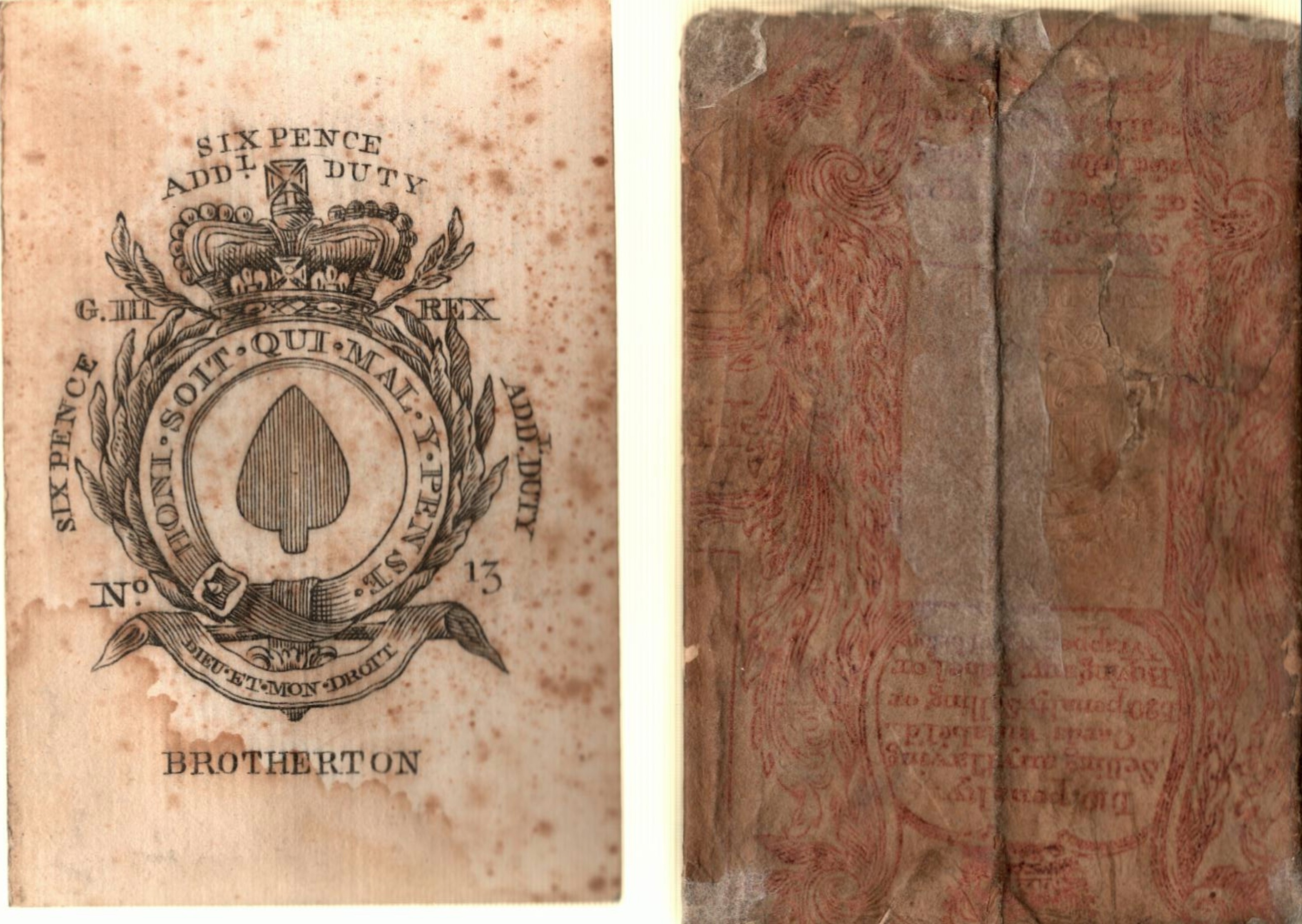 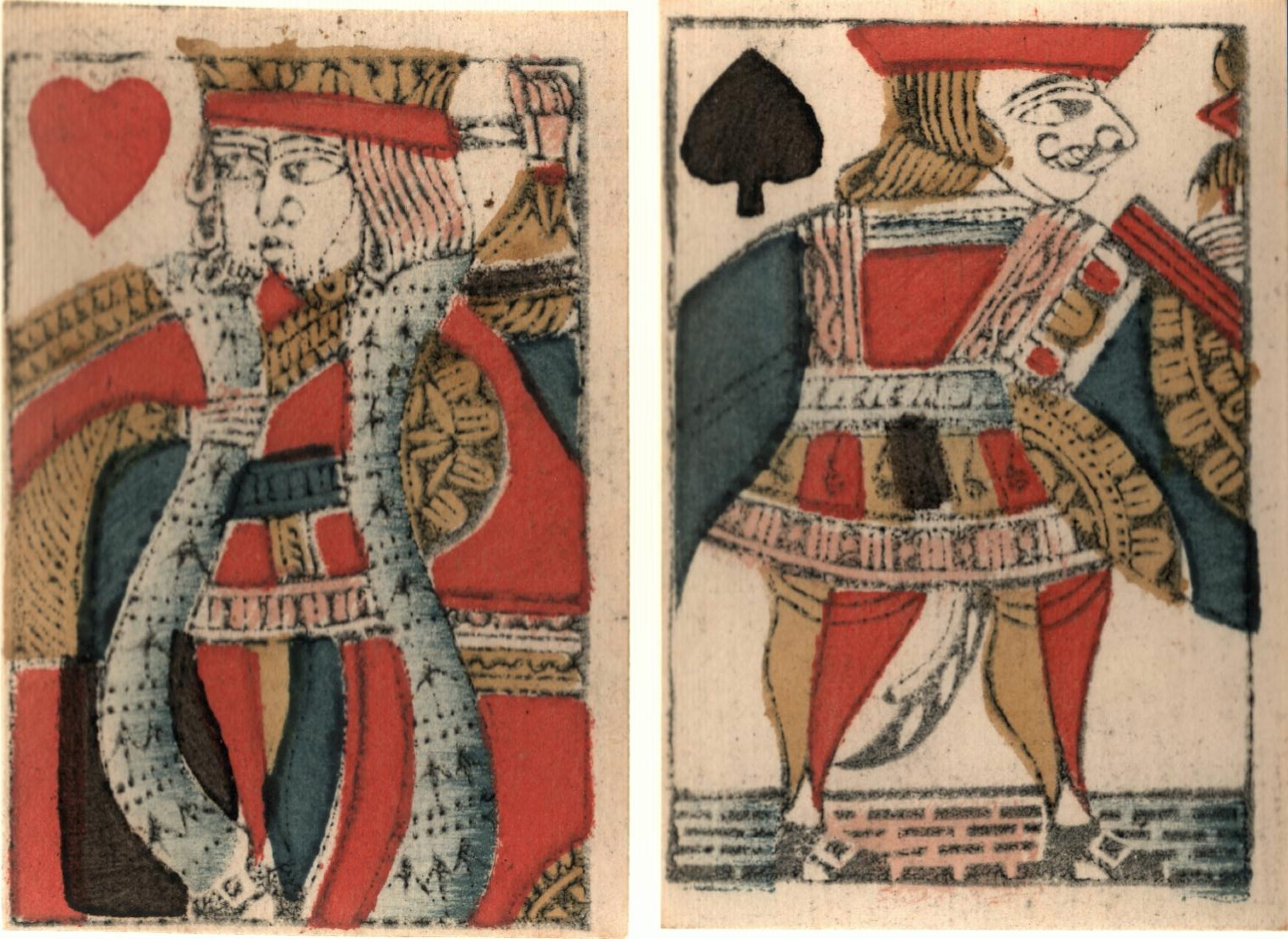 Later packs with a higher tax rate date from c.1805-10; they have the slightly later kind of Type I courts used by other makers, too. The outlines are blue.

There is also a pack on Paul Bostock's Plainbacks website with the later courts but an AS from 1789-1801, and a Whitaker pack with similar courts and Old Frizzle.

Whitaker redesigned his courts, probably around 1840, and many of them resemble those of Lawrence & Cohen and other US makers who went on to constitute the New York Consolidated Card Co., and who used them from c.1855 onwards. They are not like the courts of other English makers of the period. 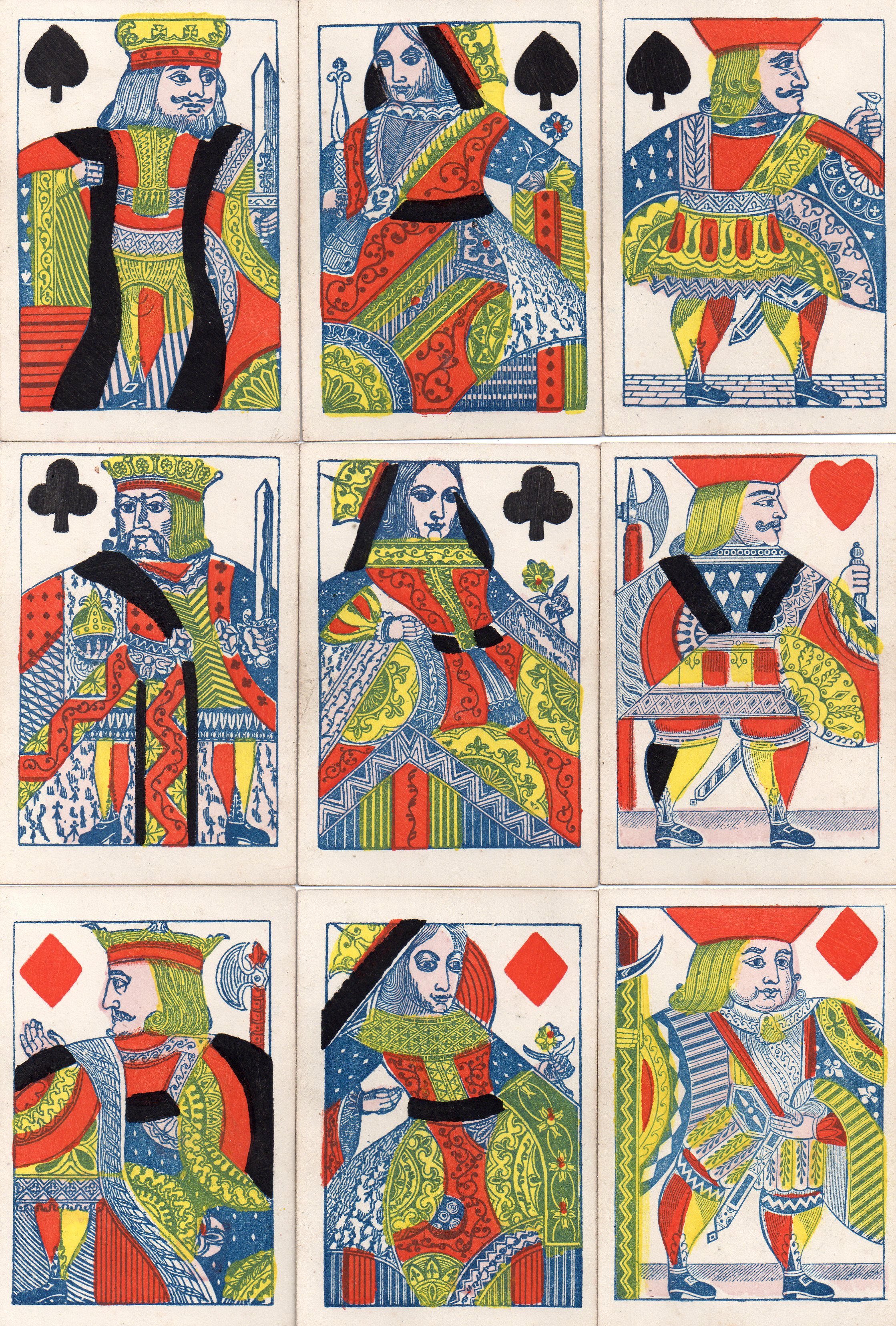 There are different pip types, on the number cards as well. In addition to Old Frizzle and the usual Export AS, Whitaker also used the Isle of Man AS (see page 5 of this blog).

The other version of his single-ended courts is much more like the courts of Lawrence & Cohen and are also found in some Belgian packs. Whether they were made for Whitaker in Belgium after the 1851 fire is difficult to say. (For a set of Lawrence & Cohen courts, see page 13 of this blog.) 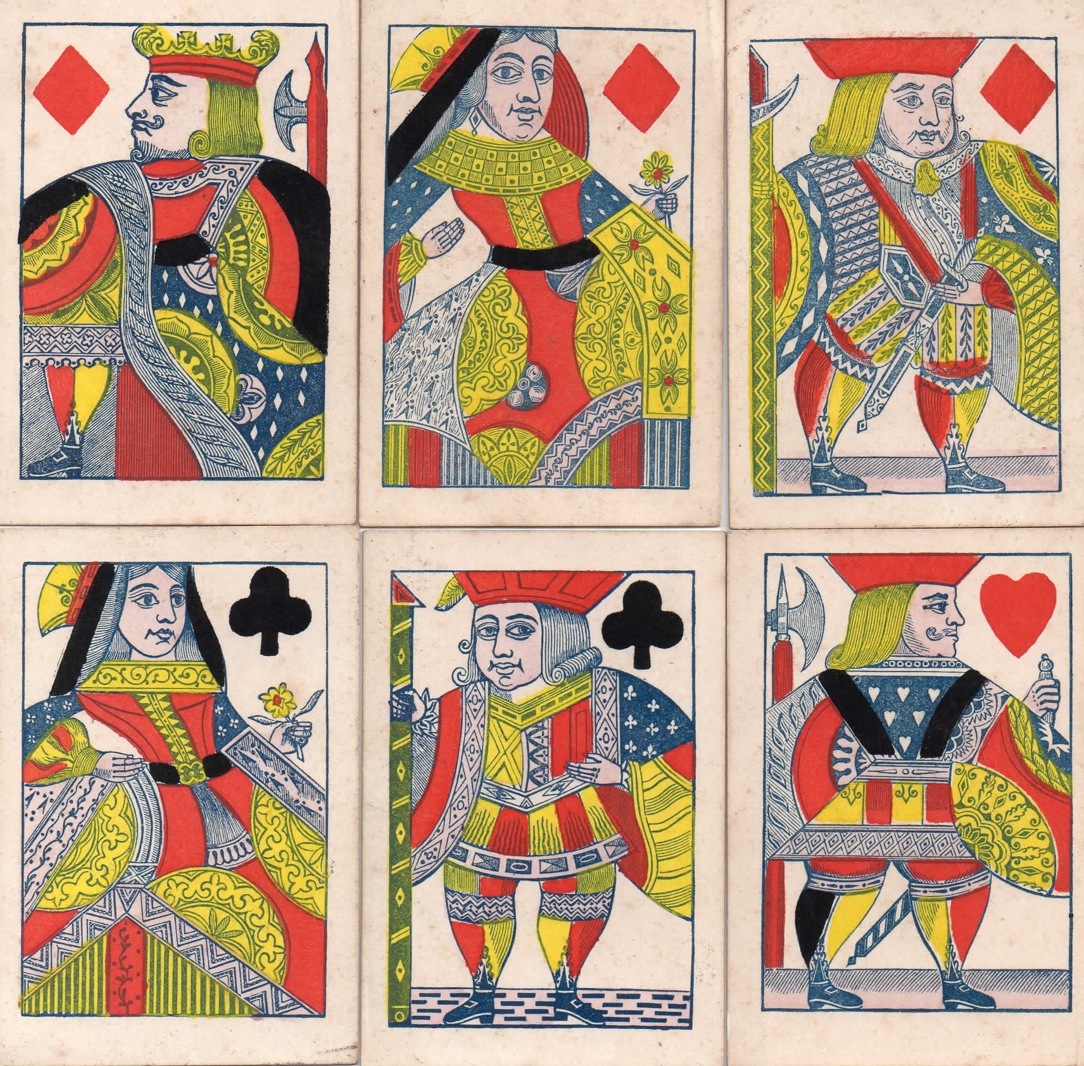 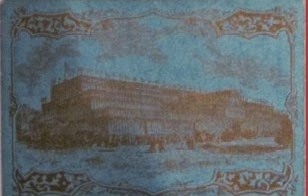 The pack he made for the Great Exhibition with a picture of the Crystal Palace on the backs has these courts. Unfortunately, the background colour is a dull blue with a steel-engraved image of the Palace in gold, so it doesn't show up well on a scan.

He also had packs with a decorative overlay on the courts and all the pips, often with export ASs. 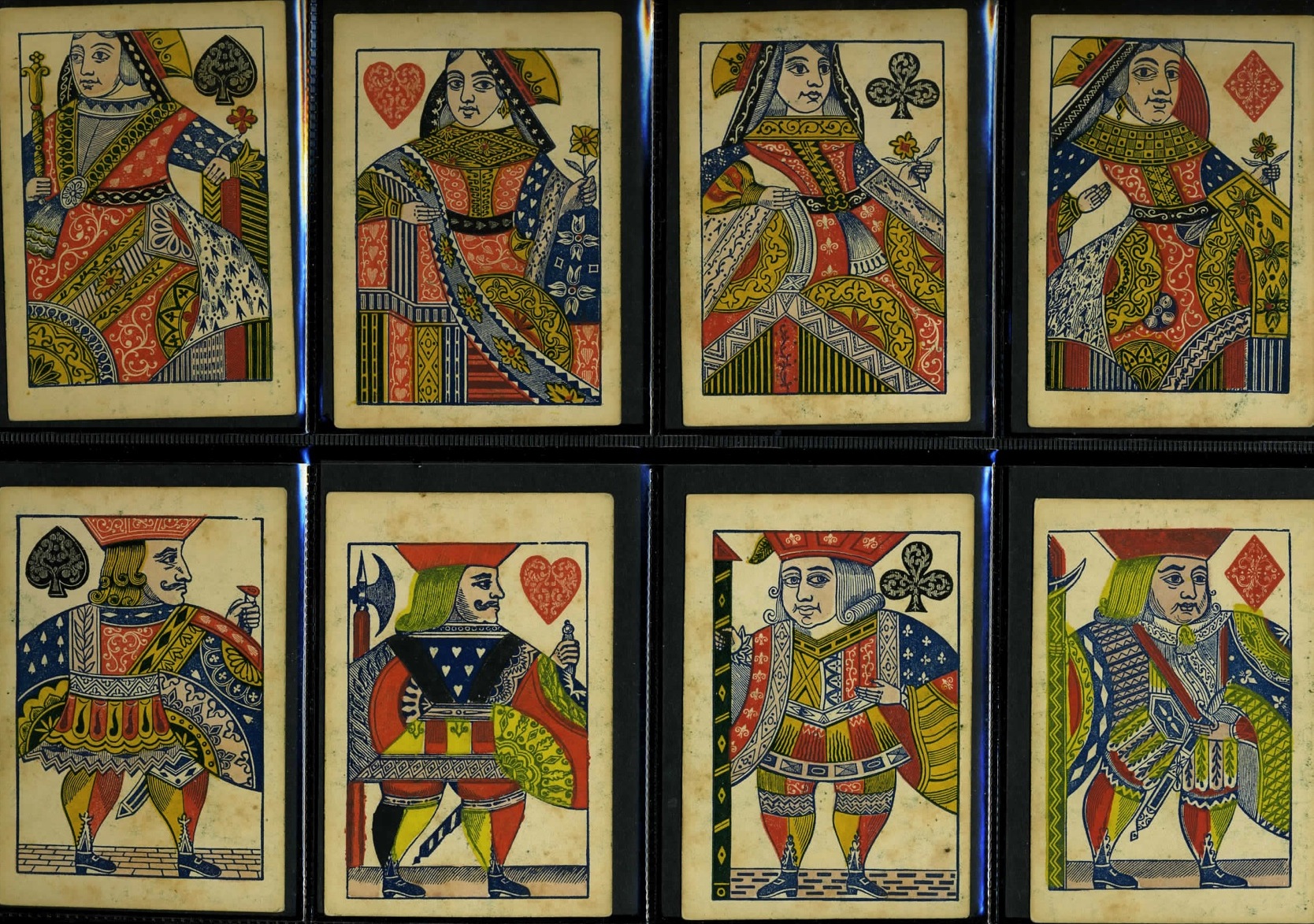 His double-ended courts are from the same plates as those by Perry, but the colour distribution is different. 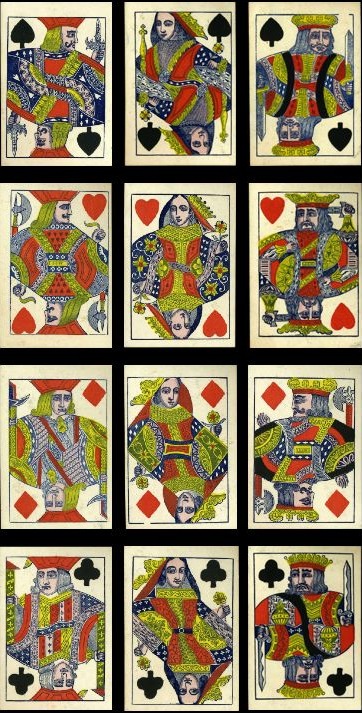 Whether there was any connection between Whitaker and Perry I don't know. Perry, a stationer, had cards made for him with his own ASs from 1865-68. 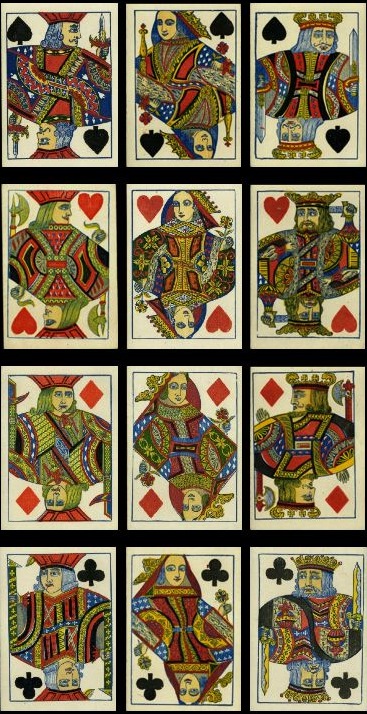 These cards were probably made by Steer. The pack illustrated below is from the Albert Field collection at the University of Columbia. It demonstrates that the courts are the same as those used by Perry about the same time (BW3), as described by Sylvia Mann in her catalogue of the William Penn collection. The AS is also the same except for Steer's name. Sorry that the image is not of the best quality. 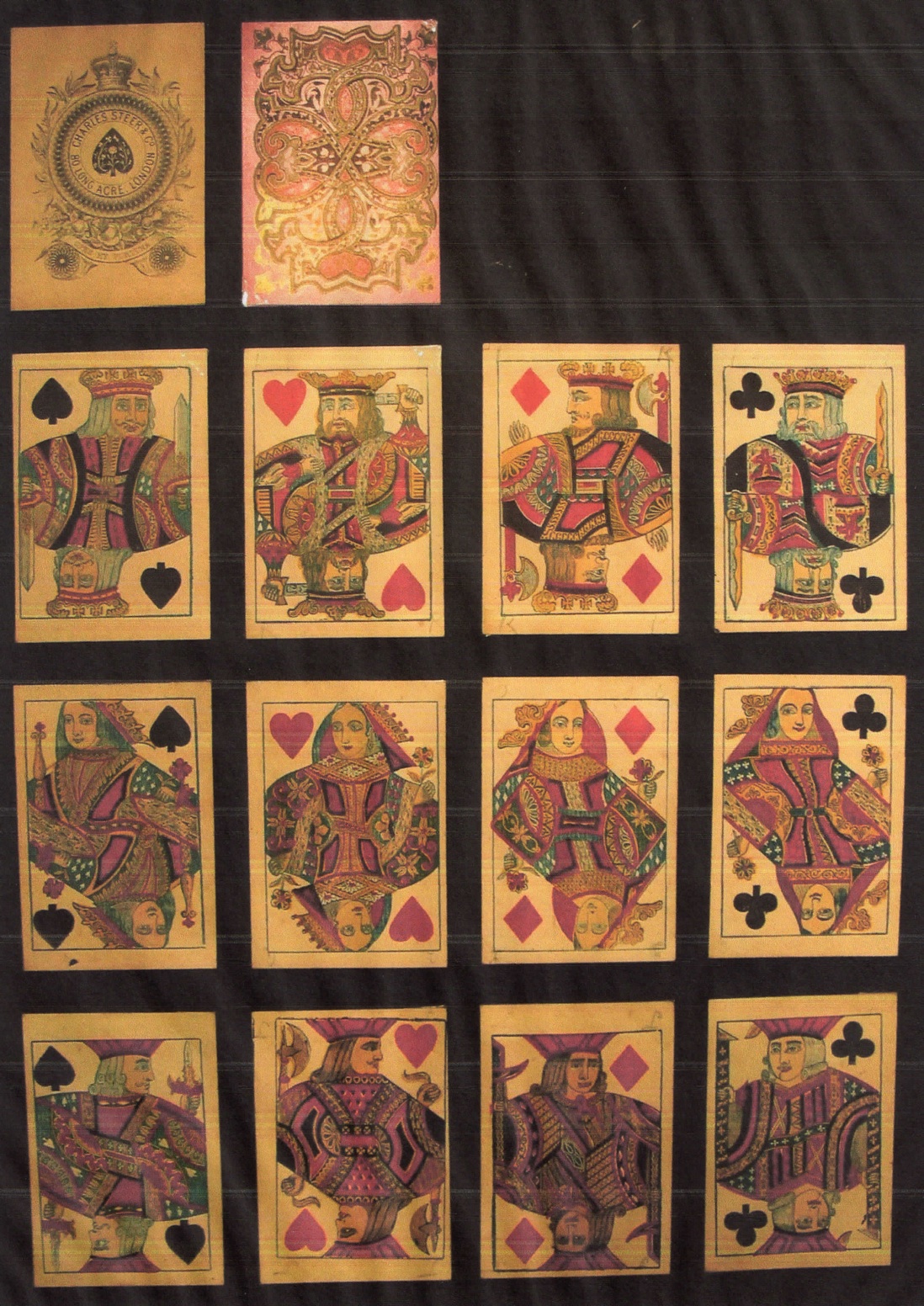 Whitaker also seems to have made patience cards from quite an early date. I've only seen anonymous packs, with the AS as a garden spade, but the court design is a redrawing of BW1.

After Whitaker disappeared, the only cards with BW2 courts are to be found in Belgian packs, but I am still unsure as to who printed them. Anton Benda imported some packs into England from c.1860-1880 with these courts and an AS based on the English Export AS of the Old Frizzle period. 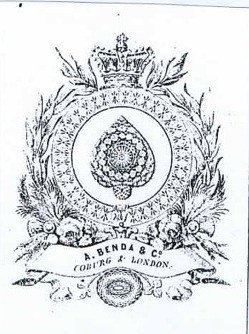 If you compare this with the anonymous one illustrated on page 18 of the blog, this suggests Mesmaekers was the maker. Who knows?! See also page 37.

There were three Wheelers who made cards, but it isn't clear what their relationship was. Thomas, the earliest name we have, was possibly the father (or older relative) of William and Henry. Thomas Wheeler appears in directories at 2 Richbell St (1799), 8 Middle Row, Holborn (1801), 118 Holborn Hill (1802-07) and 127 Holborn Hill (1807-21). His early cards are particularly crude, as illustrated below. They are a poor copy of the courts produced by Hall at the time. 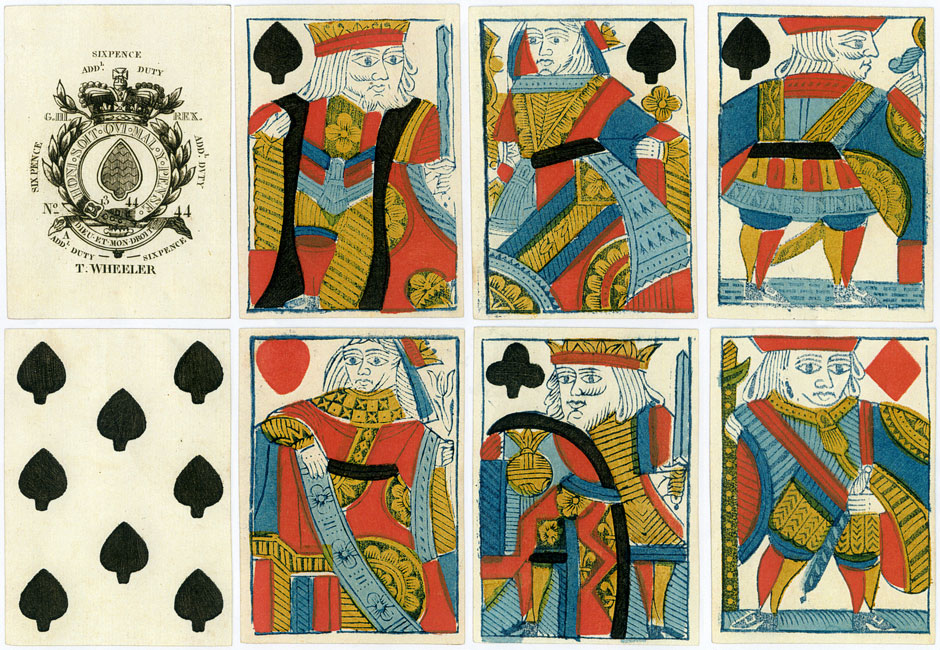 However, he soon changed to a more usual style of court like those of Brotherton. The cards of the top export pack are slightly reduced in size and have gold leaf on each edge. Many Wheeler aces turn up in what are most likely to be second-hand packs, because the courts don’t match the ace (for more details of mixed packs, see page 34). The lower example below has Hall courts. 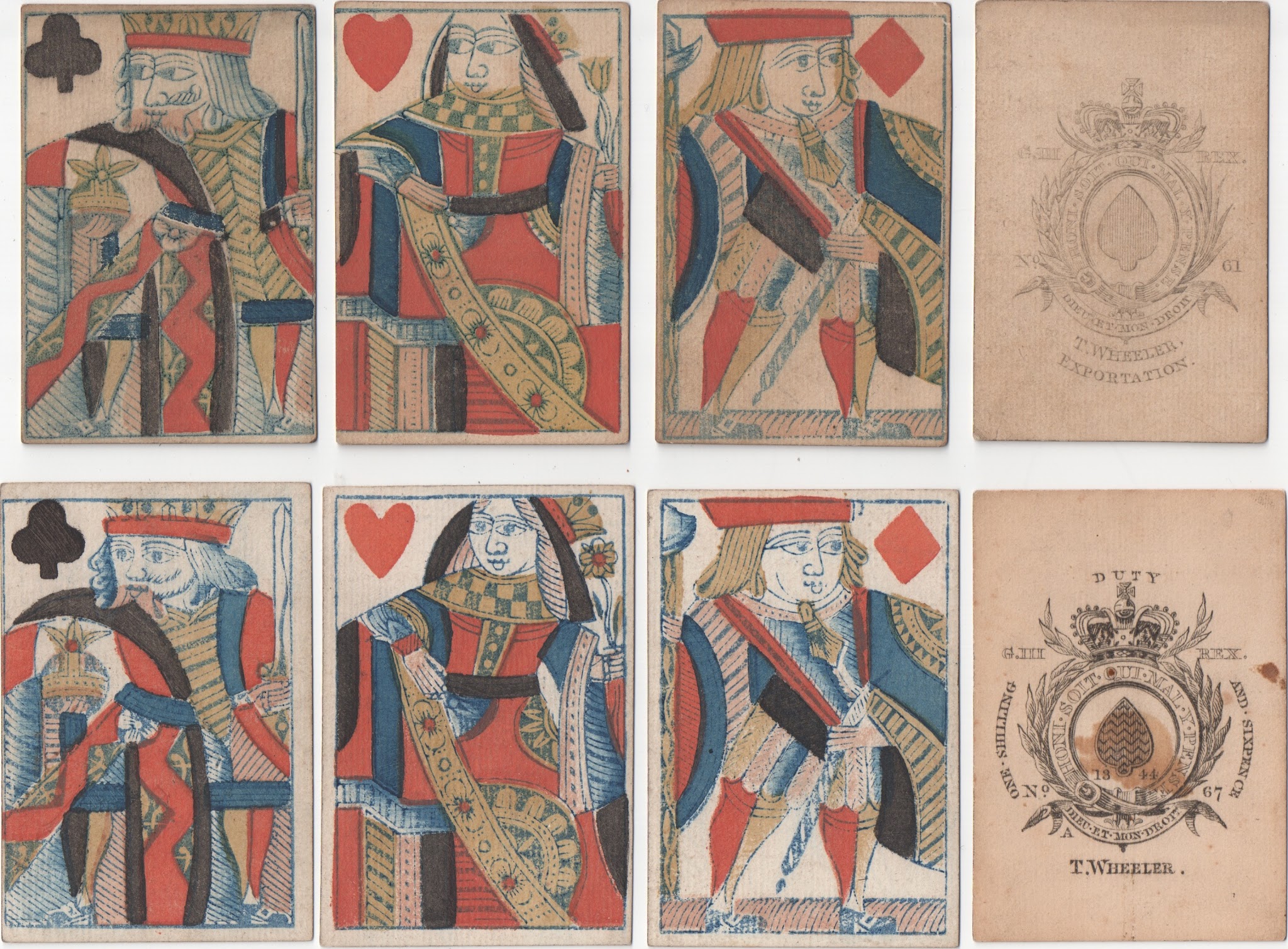 He also seems to have used Type II courts different from the early ones above. 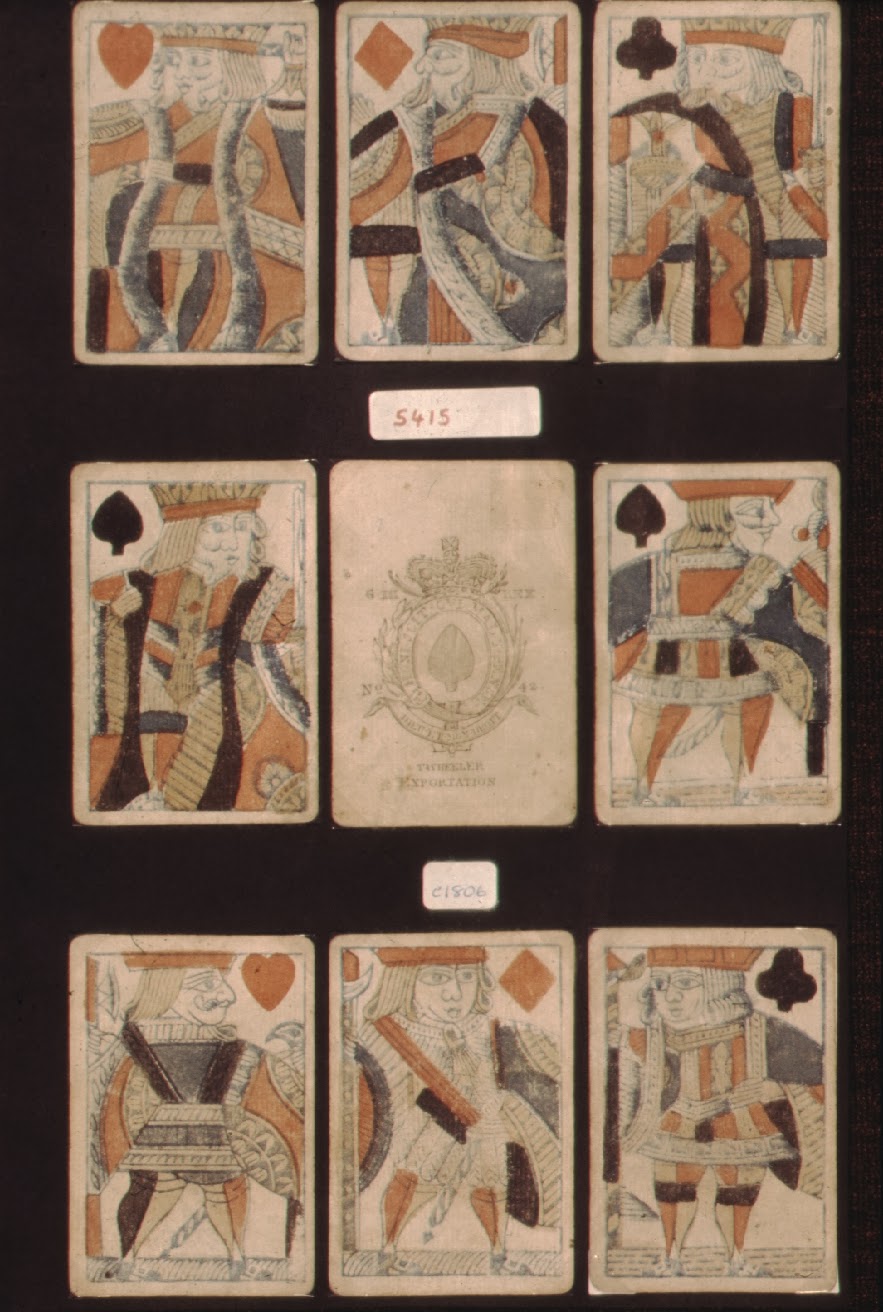 Above: from Sylvia Mann's collection

The distinctive AS was used in all his packs for the home market, although it would appear that it was originally designed for his Ludlow's Knights Cards of around 1800. These were an attempt to introduce some innovations such as double-ended pip cards and in a second version double-ended courts. The design of the courts is even cruder than usual and the double-ended ones are not even mirror images, nor are they based on the single-figure ones. 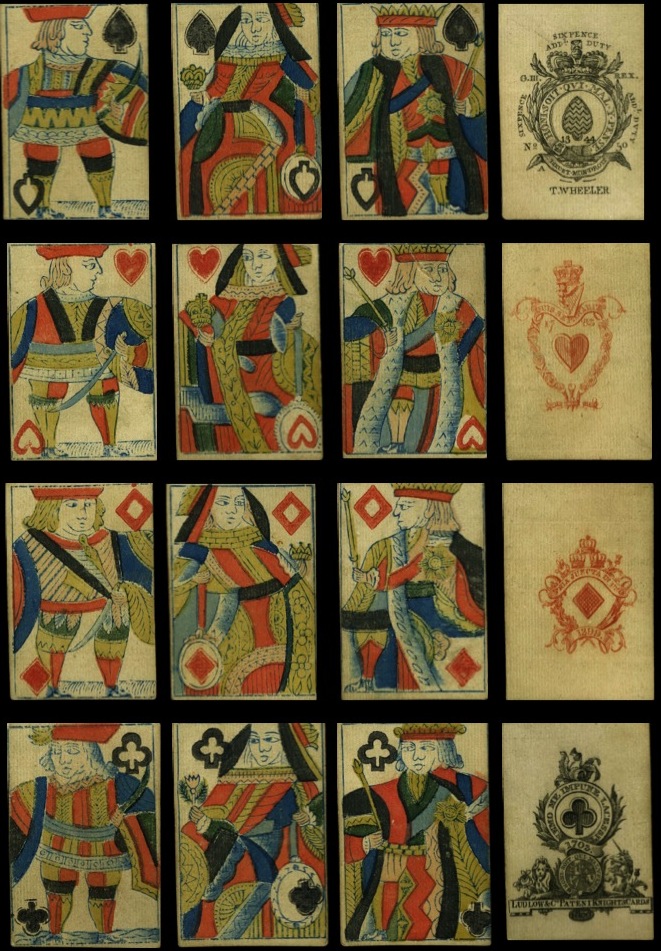 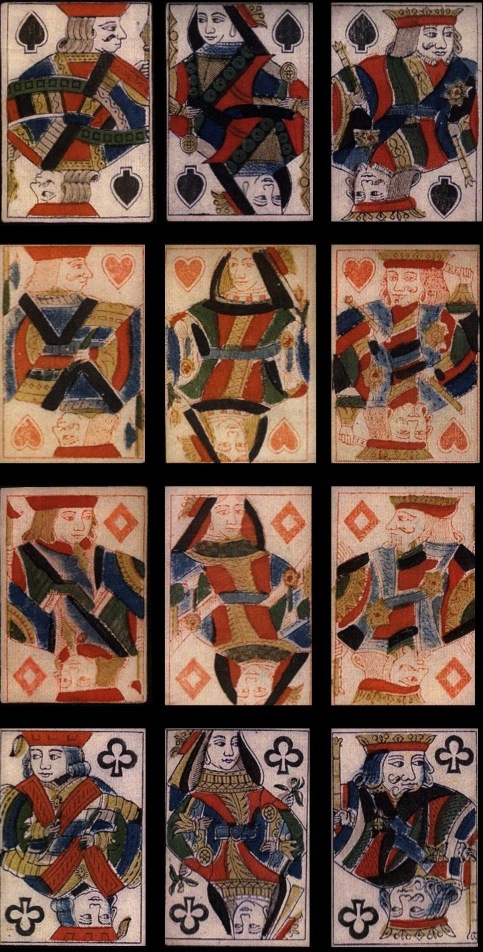 Ludlow aces of clubs were sometimes used as ASs illegally by stencilling a spade over the centre of the club design. They appear with cards by different makers, so were probably part of the second-hand trade.

William Wheeler was assigned a Garter AS in 1821 and is listed in directories at 11 King St., Snow Hill from 1822-28. A pack of his cards has recently been illustrated by Neil Darbyshire in the EPCS Newsletter. 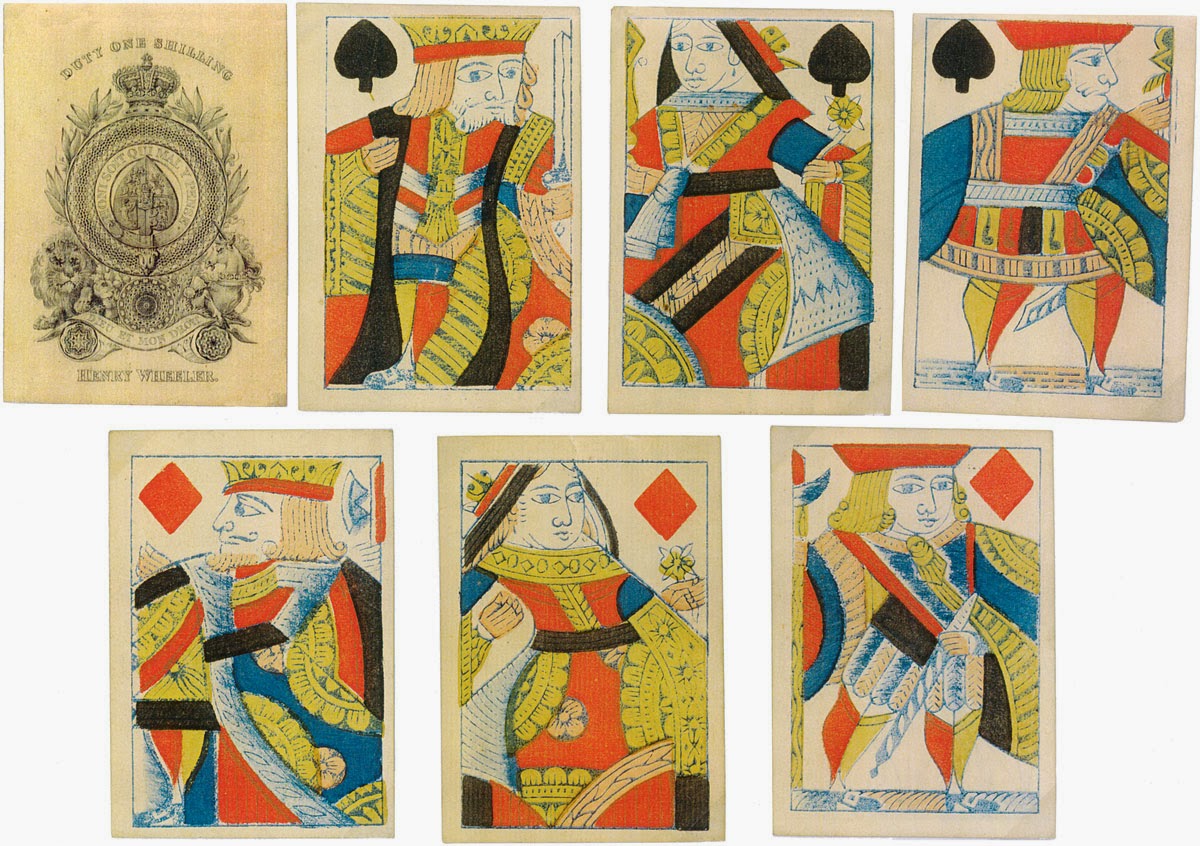 Above: a (legal) Henry Wheeler pack with Old Frizzle; the courts are Type III, like those of Reynolds.

A Henry Wheeler appears at 3 Back Church Lane in 1839 and he is listed as a pasteboard-maker (not cards) from 1844-55 at 14 Coppice Row and in 1859 and 1860 at 16 Vineyard Walk, Clerkenwell. Whether this person was the deported Henry's son I don't know, but he was born in 1817, so was clearly not the deported card-maker. In the 1871 census he is still listed as a card-maker (pasteboard) and his birth-place is given as Clerkenwell.

There is an interesting article about the Wheelers by Michael Cooper, first published in the IPCS Journal and recently reproduced in the EPCS Newsletter.